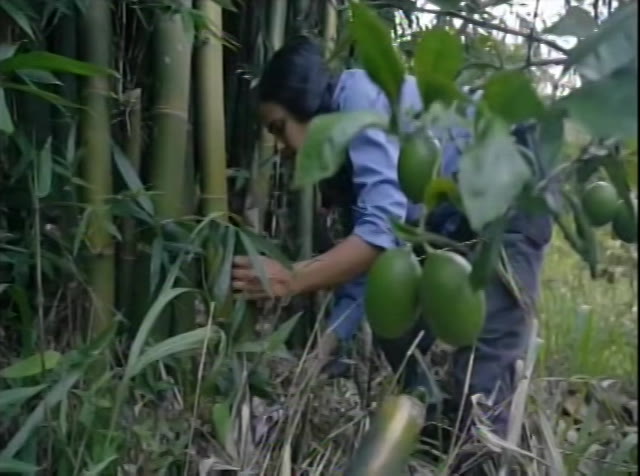 óiói?omqmqmqmq female announcer: it's ground zero of the coronavirus outbreak. ♪♪♪ italy's iconic cities closed, the country on a war footing.
9:01 am 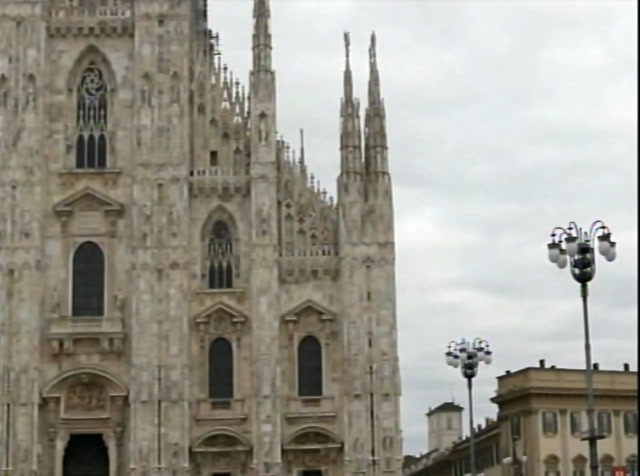 ♪♪♪ tens of thousands infected, the death toll still rising. ♪♪♪ one of the world's best health systems atreaking point. inside a country in lockdown. ♪♪♪ emma alberici: [speaking in foreign language]
9:02 am 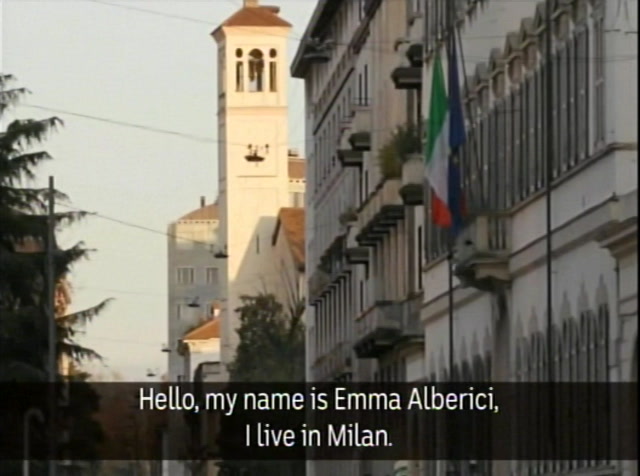 announcer: necessity is the mother of invention. so, given even foreign correspondents are working from home, i've asked family and friends to share their experiences of life in lockdown. ♪♪♪ emma: [speaking in foreign language] announcer: my cousin, her partner ariel, and my 90-year-old auntie maria are at home in milan, the heart of italy's design capital. emma: [speaking in foreign language] announcer: emma's mother maria normally lives on her own
9:03 am 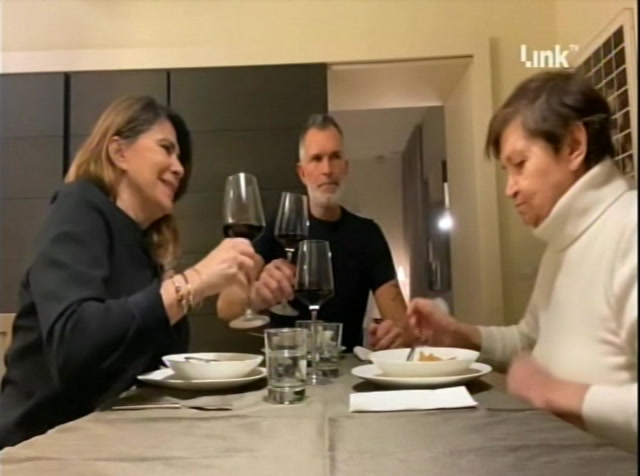 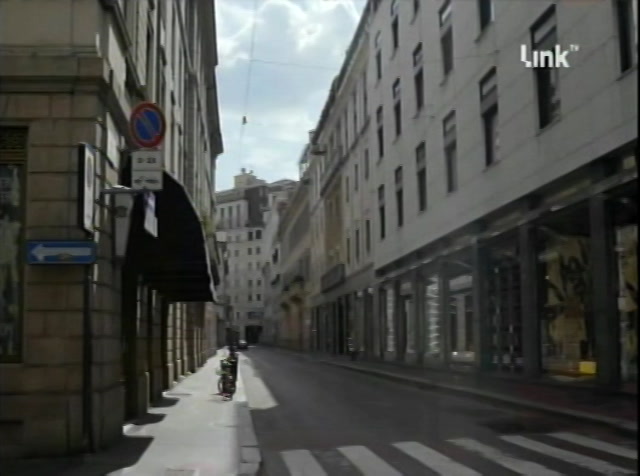 february have become more restrictive by the day. it started with schools. now, everything that isn't an essential service is closed, even the parks. ♪♪♪ announcer: my cousin, emma alberici, is still going off to work each day. essential staff at manufacturing firms have been given special rights to keep the wheels of production and export moving. northern italy is responsible for 40% of the entire country's gdp.
9:05 am 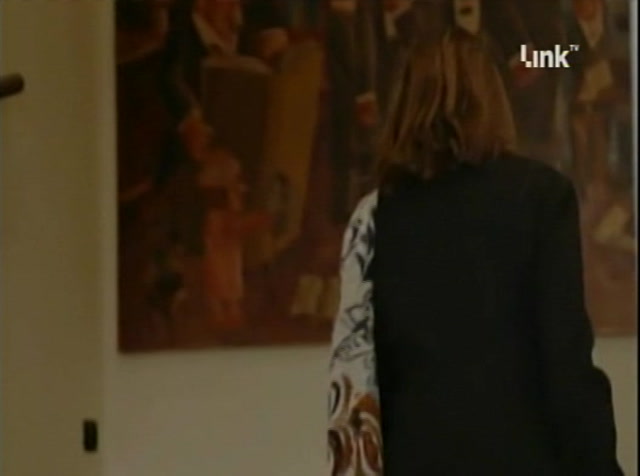 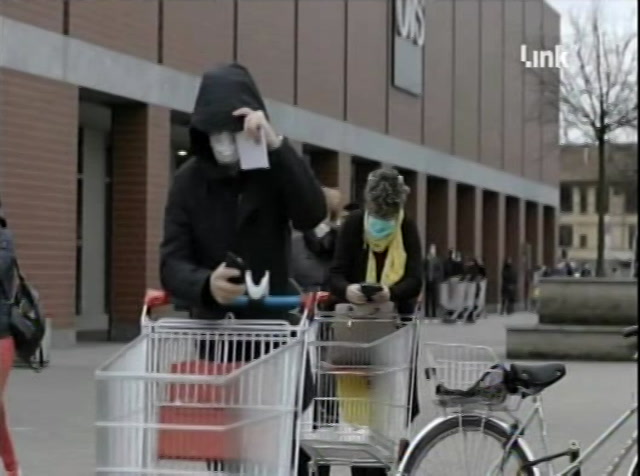 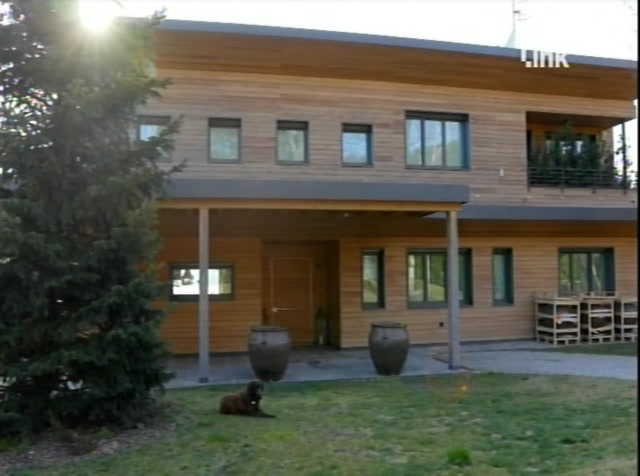 katrina wallace: so, my name's katrina wallace, and we live in sesto calende, which is about 50 kilometers north of milan. i'm australian, but i've been living in italy for 17 years. we have two boys aged 10 and 13 years old. announcer: katrina wallace and her husband live on lake maggiore. her husband runs a manufacturing business, so he too has a leave pass to go to work. katrina: it is quite simply unprecedented. i've never seen anything like it. i have to say today was the first day that i became scared because this morning, we woke up to find out that a very close friend of ours, who lives 200 meters from our house, he's the--he's the ex-mayor of this region.
9:08 am 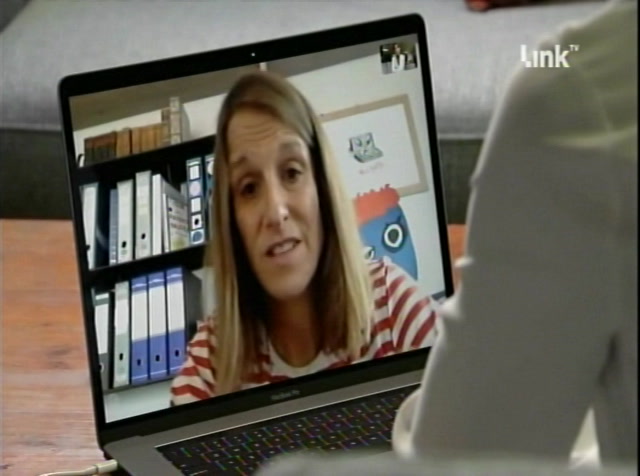 and he has been hospitalized with very serious respiratory symptoms. he woke up on monday morning with the symptoms, and by tuesday, he was in hospital. announcer: is he okay? katrina: he's very sick at the moment. he's only 50 years old, and so he's not in the age range, but--and he doesn't have any previous conditions, but he's--but he's very sick. he's in intensive care and he's been hospitalized, so. announcer: are you at all concerned that the italian government waited too long to impose these restrictions on the populace? katrina: rather than having it escalated each day and finding out incrementally about new measures, i would like the restrictions to have come in right from the beginning. italians were still going skiing, they were still--you know, it's winter over here, it's the ski season. they were still having birthday parties. they were still, you know, gathering together. and when the absolutely--you know, the most draconian
9:09 am 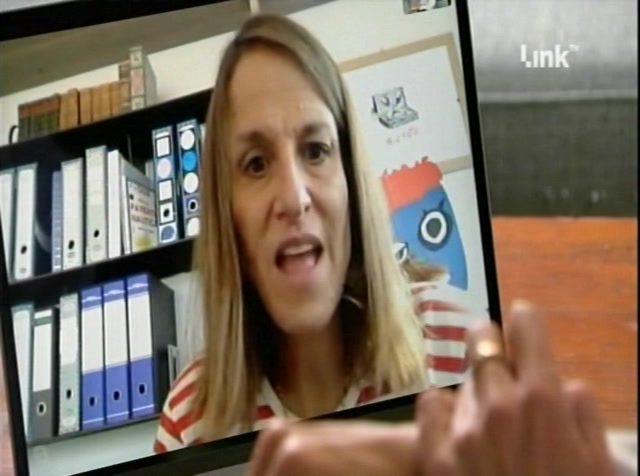 measures were announced last saturday night that you cannot leave your house unless it's for emergency, medical, or work reasons. it was only then that italians started to take it seriously. announcer: for three weeks, they haven't seen anyone outside their immediate family. caleb: it gets, i don't know--you feel kind of like there's nowhere to go, like you're stuck inside the house. and it feels--i don't know how to say it, what is it, sickness? cabin fever. announcer: cabin fever, yes, exactly. and what do you--caleb, what do you think about the coronavirus? are you worried about it? caleb: i mean, a little, but it's not like--like kids are less endangered, like other people say.
9:10 am 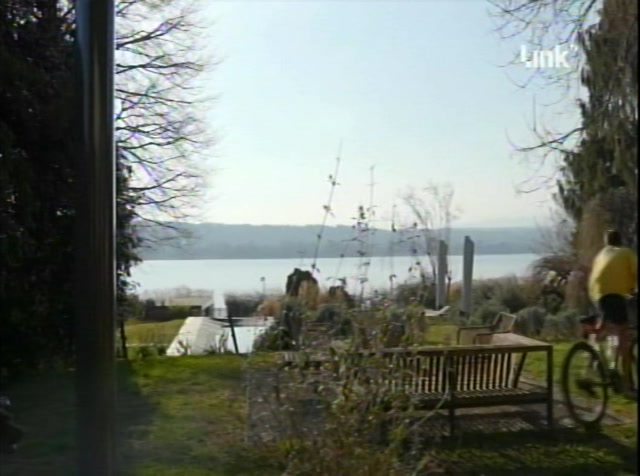 male: [speaking in foreign language] roberto burioni: [speaking in foreign language] announcer: virologist roberto burioni has become a household name in italy. he's the one who advised the government to shut the whole country down. the fact that every day, the number of cases is rising so exponentially, does that indicate that the lockdown happened too slowly? roberto burioni: well, we will see the effect of the lockdown in a couple of weeks. and you know, i hope that in that moment at the numbers will not rise any more. if not, we will need a more strict lockdown. this is really something that should be teaching other countries that if you don't move ry quickly and very strongly, you just get overwhelm.
9:11 am 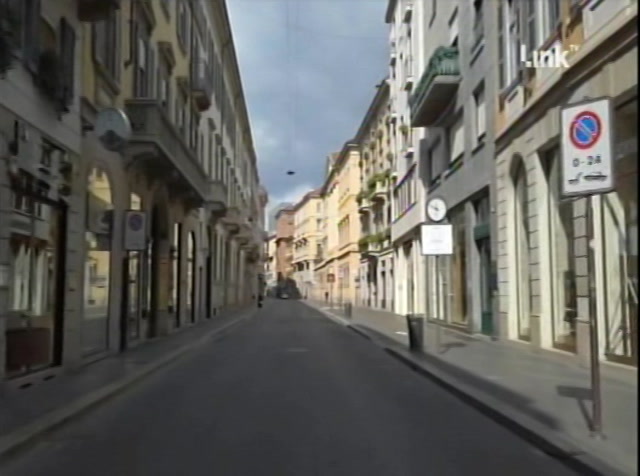 announcer: as far back as early january, the professor was warning of the dangers coming from china, which has strong links with milan's fashion and furniture industries. three flights a week were landing in italy from the virus epicenter of wuhan. dr. burioni gave an interview to investigative newspaper "linkiesta" on the 21st of january. the headline shouted, "this chinese virus is dangerous. roberto burioni says italians are at risk too." nine weeks ago, he told them, "european authorities have said that the risk of the virus spreading to europe, especially italy, is small. i don't agree at all, though i sincerely hope i'm wrong." people are saying in australia people die of influenza all the time and that we shouldn't be exaggerating the risks.
9:12 am 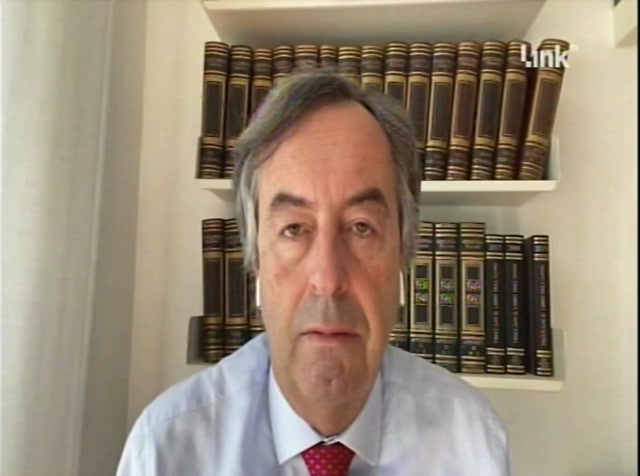 what do you say to them? robert: well, it has nothing to do, it's like comparing, you know, a bomb to say a match, because this virus is very dangerous, it's very--it's causing a lot of deaths. mortality is very high, and that's why i think it would be a very bad mistake to underestimate the gravity and danger coming om the virus. announcer: italy confirm its first two cases of coronavirus on january 30. chinese visitors from wuhan, who'd arrived in milan but fell ill in rome. three weeks later, two people died and lockdowns began. within a week, there'd been a tenfold increase, more than 1,000 confirmed cases. the number of people infected has now exploded to more than 60,000.
9:13 am 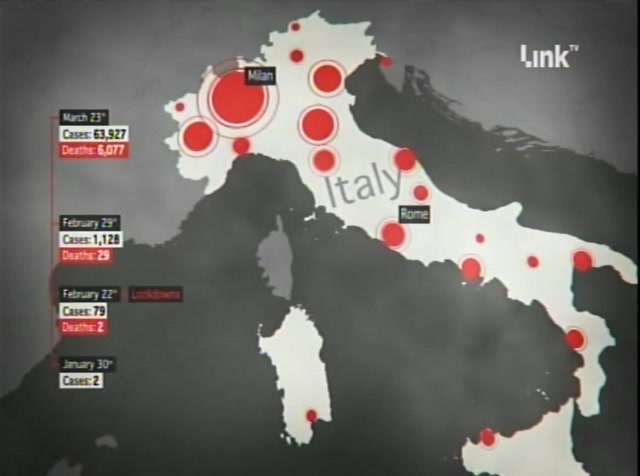 are you seeing deaths among young people in the same sort of numbers, or is it very much concentrated to older people? robert: that's every disease, every viral disease takes a greater toll on the elderly. i had a call yesterday night of a basketball player, 28 years old. he's in intensive care in a very critical situation, so just don't imagine this is only a virus for the old people, which is a danger for the old people. yesterday, a doctor, he was 48 and in perfect health, he died. so really, don't imagine this is only a problefor the yesterdaelderly people. was 48 and in perfect health, he died. ♪♪♪
9:14 am 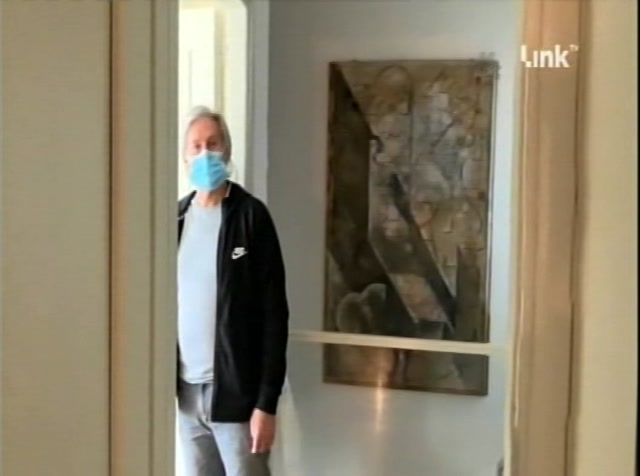 guglielmo gianotti: [speaking in foreign language] announcer: dr. gianotti has the coronavirus. he's at home in quarantine with his wife, enza, who works at another local hospital as a gynecologist.
9:15 am 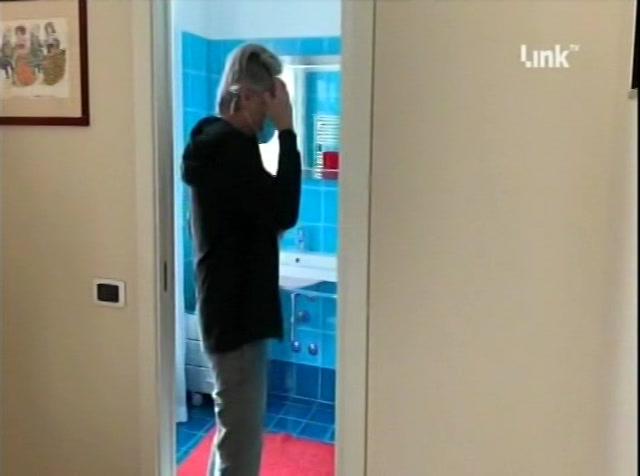 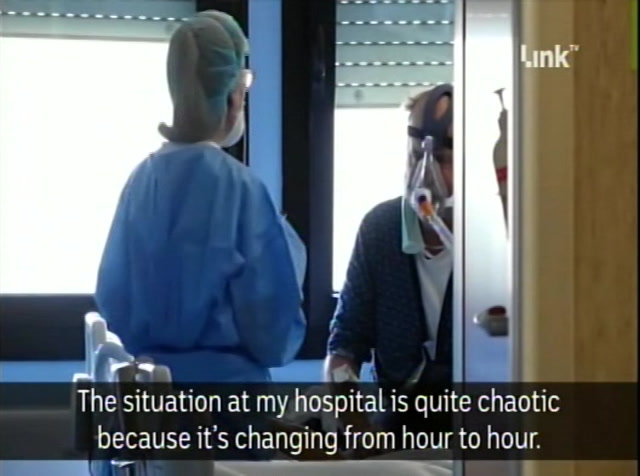 announcer: the first person to die of covid-19 in italy died in dr. gianotti's hospital. guglielmo: [speaking in foreign language]
9:17 am 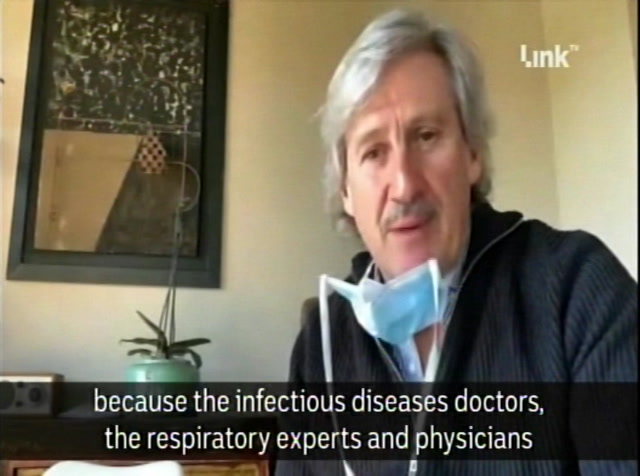 announcer: our local crew has been given permission to drive to the nearby province of lodi. they're going to visit a young couple who have been stuck at home with their three year old for 23 days. ♪♪♪ lodi was the first place in the country to shut down, and now it's also the first place to reap the rewards of acting quickly. there are still new cases of covid-19 patients every day, but the rate of infection is slowing. isabella gorni: [speaking in foreign language]
9:18 am 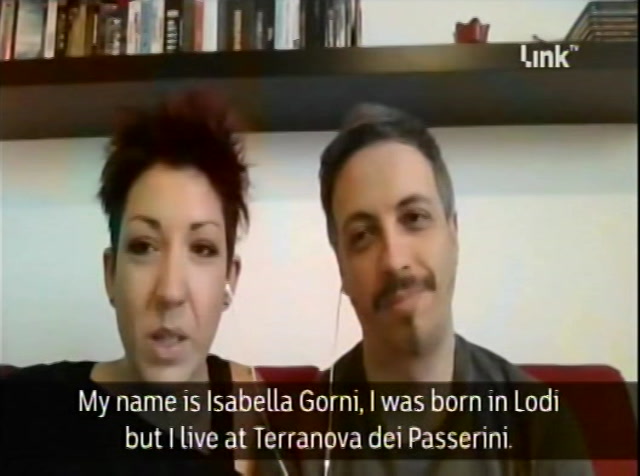 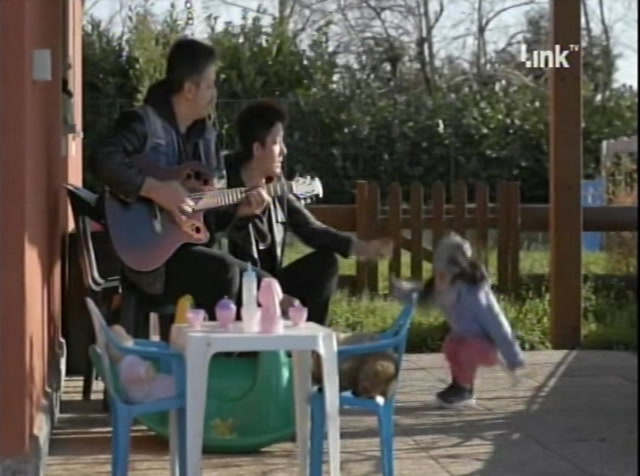 have been too high. announcer: [speaking in foreign language] roberto: [speaking in foreign language] both: ciao. announcer: across italy, makeshift tent wards are being built to cope with the overwhelming number of people presenting at emergency. doctors now want everyone to assume they have the virus and only go to hospital if they have serious trouble breathing.
9:21 am 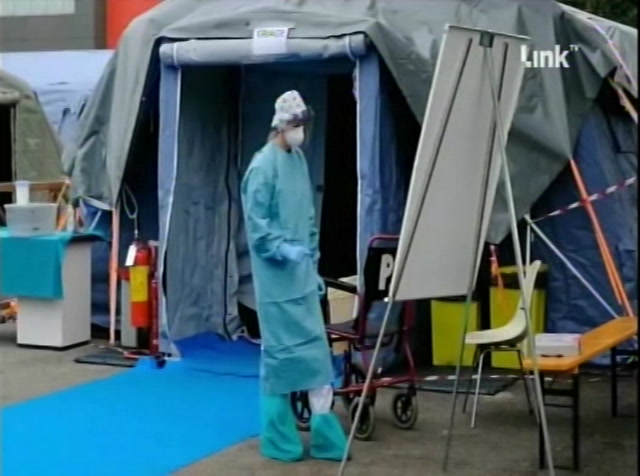 the priority is to keep health workers safe and at work. dr. gianotti is one of more than 4,000 healthcare workers who have caught the virus. guglielmo: [speaking in foreign language]
9:22 am 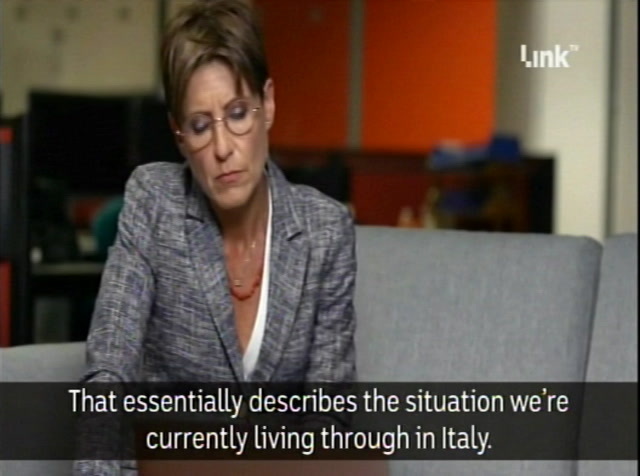 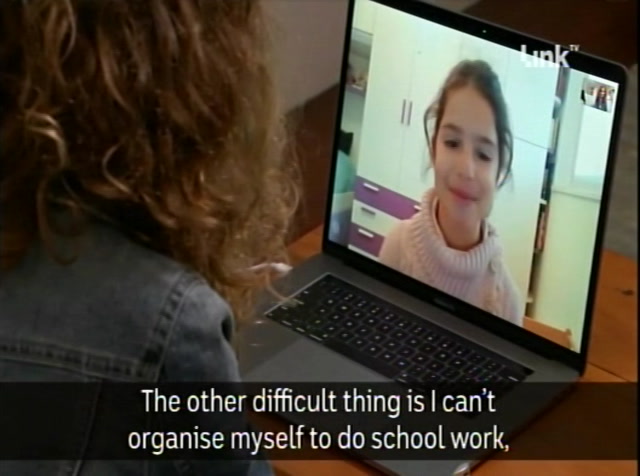 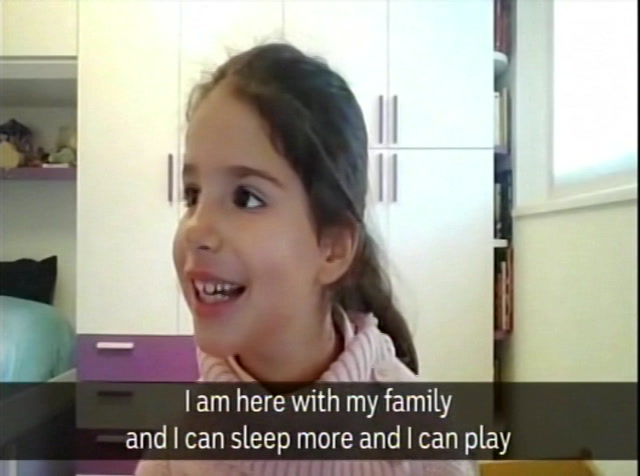 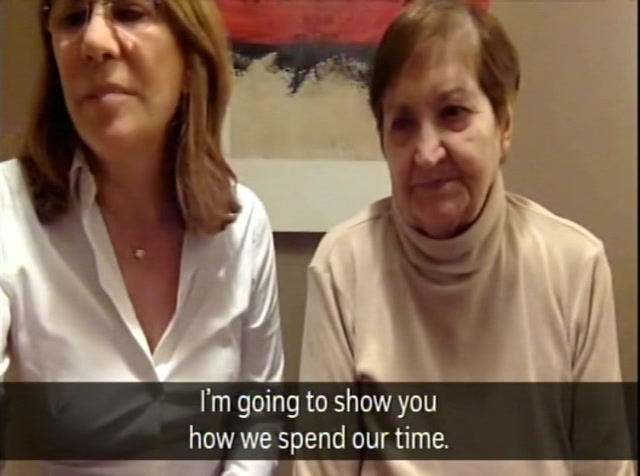 announcer: all we can do while we wait for a vaccine is stay apart physically, while also looking after each other in spirit. ♪♪♪
9:26 am 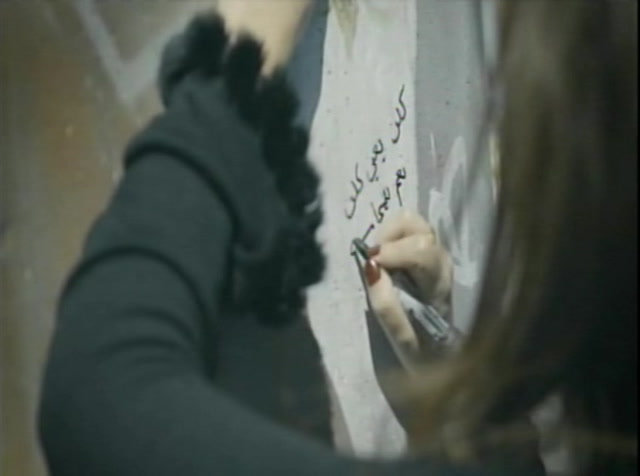 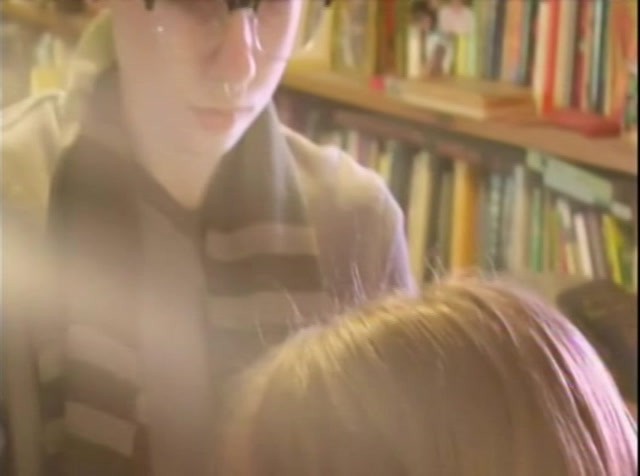 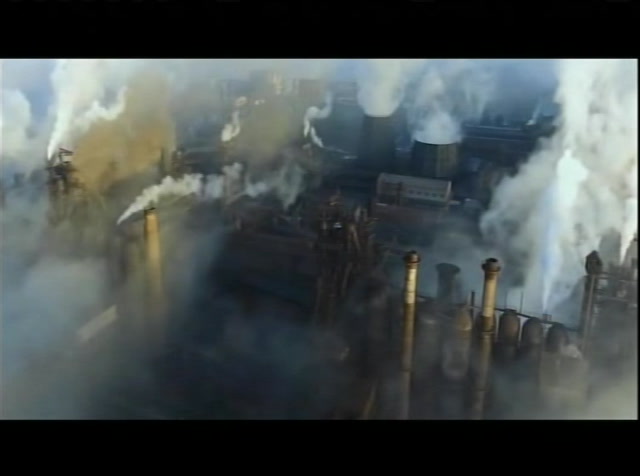 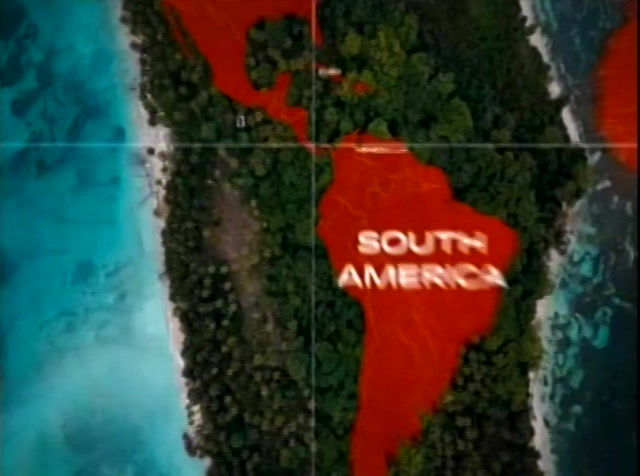 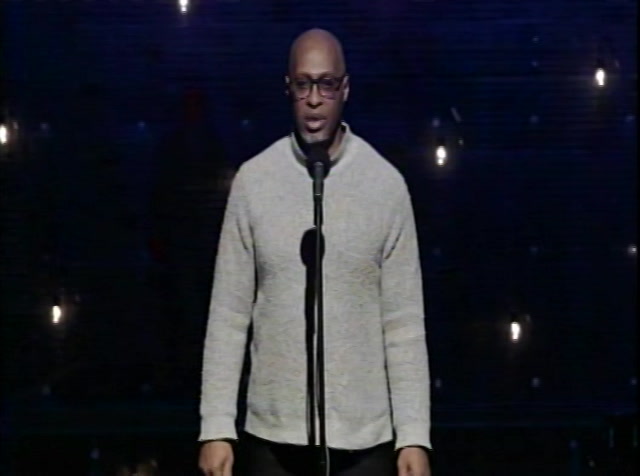