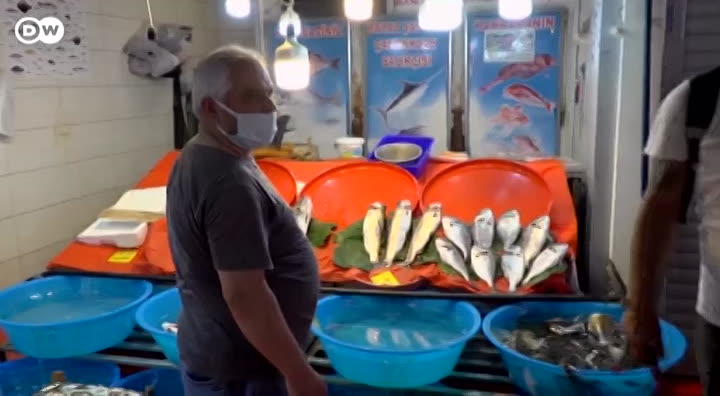 but today, other fishermen were faster than him. it's been tell for fish mongers. another sales on going well, right now. there's a problem with the sea. we'll just eat the fish ourselves. and that that problem is a harmful algae bloom in the sea of mara. that's been drifting off his symbol coast for weeks. the boss for us and mom are a see, they're essentially the same waters. now that the algae of spread aggressively many a symbol residence or preferring to go without fish. but yeah, shar has no other choice. his children are hungry, we shall not re which my wife has started to work. so we've got some extra income. and i think now that they've lifted corona virus restrictions, i'll soon find regular work and we'll be able to get by a little better so that you should see the value you should use in
1:46 am 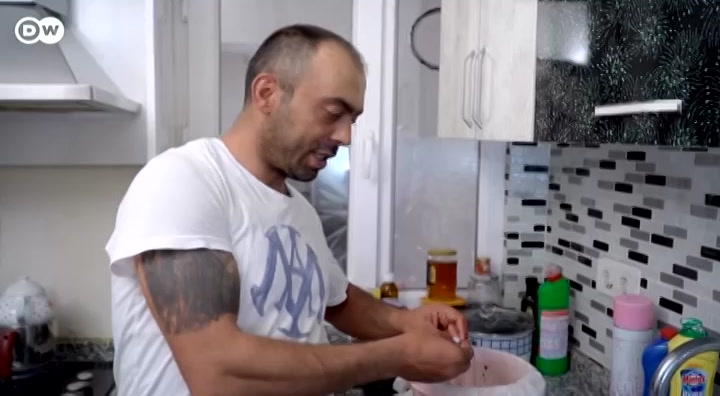 this is the way hums the are prepared. yes, our explains. and for a brief moment, he and his children forget their dire circumstances. turkey practically reopened on july 1st, tourists from iran and russia are already re entering the country. many casting their lines from the lots of bridge they that's a hopeful sign. perhaps they can find work and hospitality. and fishing can go back to being just a hobby. now with a somewhat different notes, bears have long been extinct in many parts of europe. but in spain's north in the woodlands of the canterbury, a region brown bez, a growing in numbers. it's a development that is largely welcomed. that is the best begin to come down from
1:47 am 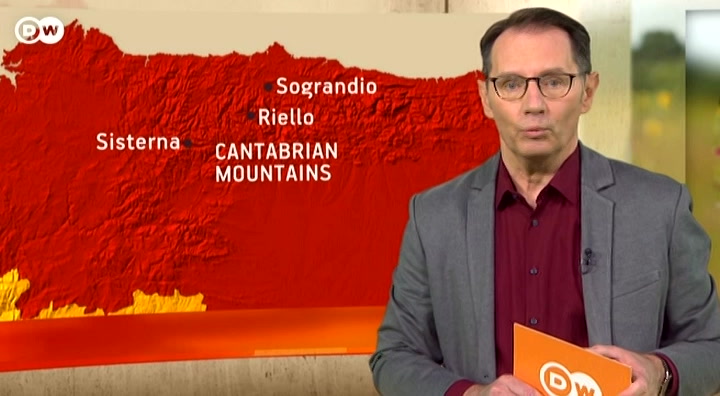 the mountains that all the traditional habitat and endanger local residents. there are growing calls for more to be done to protect the villages. he must be here somewhere. roberto, the sanchez is hold on his trail. europe's largest predator is at home in the woodlands of northern spain. he didn't, if he got lost, there was a bear here is no doubt about it. only quantum oak, no other animal would climb up a cherry tree and break off a branch just for the fruit with comment. unless for battle has proof. he works for a wildlife conservation association and has installed surveillance cameras and spots where bears visit. frequently. he loves watching the behavior of wild bears when they're feeling undisturbed. yes, i do this. you'll see there they are. and that makes me so happy and it tells me
1:48 am 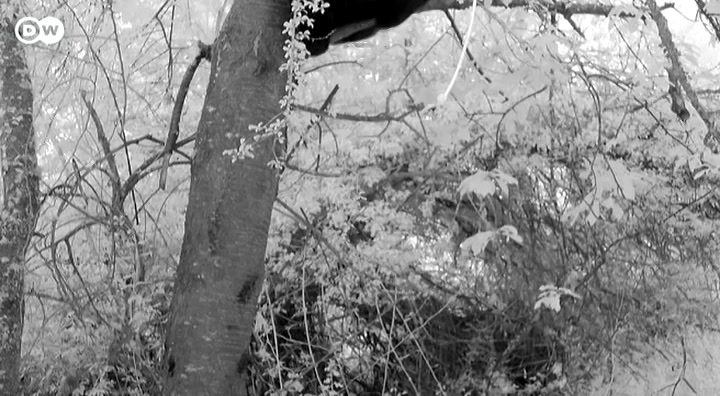 this is one more place where the species feels at home. again, the bears have died out in large parts of europe a month and here they've survived with people like us. that's wonderful. awesome. even here in the contemporary and mountains, brown bears nearly became extinct today. there are about $300.00 of them in these parts. the biggest population of best and western europe, but the numbers are problematic to the animals have been entering people's prophecies in search of food. in maria, sundry esco's garden in a re, a once took an entire cherry tree. well, also the bear came and ate everything. when you can, you know, he didn't leave a single cherry behind him for more and we were just about to harvest him. yes, i know it now. it's too late to 90 kilometers away. insist dana bennett has been making daily visits to a restaurant storage room. the owner, jose gonzalez filled the bag, trying to get into
1:49 am 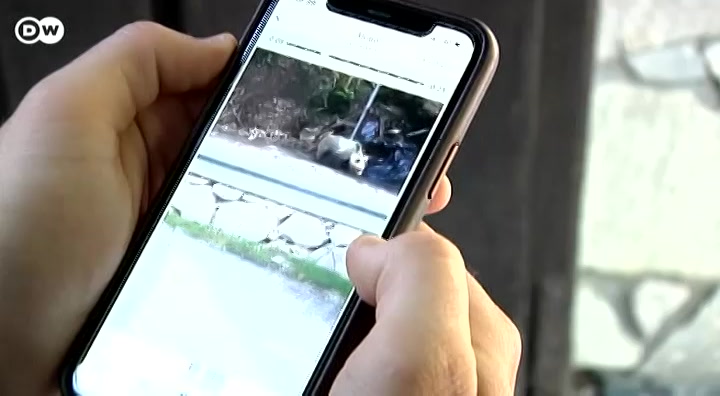 a barrel of old cooking oil. he says he'll stole the oil in the carriage from now on, but he also wants more protection. is telling us here. we've got to chase the bears away and see to it that they don't come into our village anymore. that's vital. my youngest, lots of children and elderly lives here in the summer. there could be an incident with anyone, an incident like the one a few weeks before. when a bare took a 75 year old woman by surprise and seriously injured her biologists operating a refuge for injured and behavior already abnormal baz examined the case that convinced the confrontations with such serious consequences. a very rare 11 to the 1st with wrong normally bears run away from people in the restroom. in this case, it attacked the woman because it felt threatened that the woman broke her heavy during the attack and her face was injured. bears are not aggressive or dangerous per say, that was an unfortunate encounter and for the beat. for bad tony's association once
1:50 am 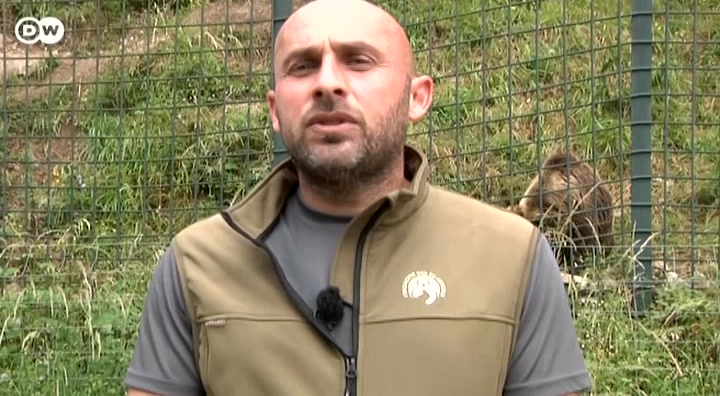 identify suspect bears, and observe their behavior. in order to stare pain if needed. the conservation is knows why the predators have lost their fear of humans. level of ally. yes, there is a lesson less farming in the villages was the meadows and pastures are reverting back into forests. so now many villages are right in the middle of the woods. the bear isn't really exiting the forest when it approaches a village in its thing and its habitat. it's important we take a closer look at what's really going on here and instead of just blaming the animals for anything that goes wrong. to keep the bears out of the villages, the conservationists want to ensure that the animal find plenty of food far away from civilization. that's why roberto and his colleagues are planting fruit trees in woodland clearings. mama haines in
1:51 am 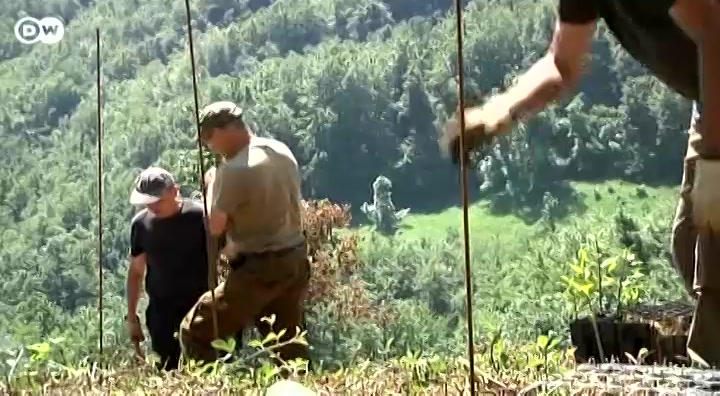 13 or 14 in the coming decades. however, we want to make it possible for bears and humans to co exist. i. yeah, we want to sensitize people to the fact that there is belong here as well. i mean, just like we people do and the conflicts are very rare. and yes, raising awareness to dispel fear, the love for bears it would seem, is all a matter of perspective and proper distancing. absolutely fantastic images there. now, it almost goes without saying that the pandemic that we mentioned earlier has also had a huge impact on lives in sweden. many people that have decided to spend the vacations, not in sunny southern climes, but closer to home. and with more than 30000 large and small islands,
1:52 am 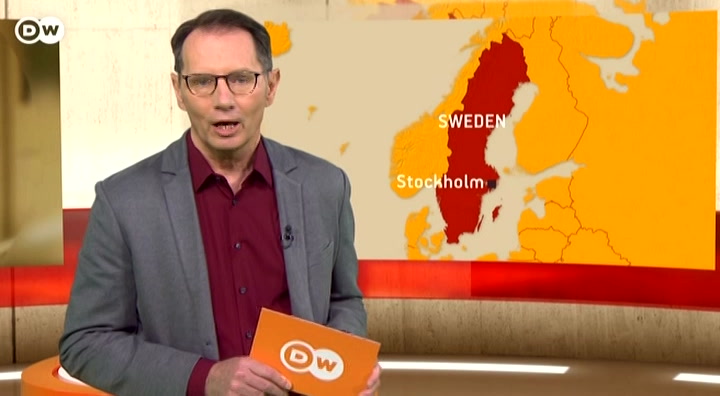 the stunning archipelago east of the capital stock home is one destination that is proving particularly popular their back guests are lining up at stock homes, ferry, pier. it's saturday and they're heading for the stock home archipelago. captain myka checks the tickets and how many have come aboard? normally, the boat can carry $160.00 passengers, but due to corona virus restrictions only 50, are allowed on board. after one more look down the peer, they kept off touring the stock hallmark a pell ago is a month for any visitor, but these days hardly any tourists venture out most here are city residence out on a weekend. john. we suites con, ready go abroad with force to stay here and find something to keep us busy. taking a trip to the stock home archipelago for him. he always comes along when they're heading out of the spits is like the 2nd mate. he watches the nigger, pilots,
1:53 am 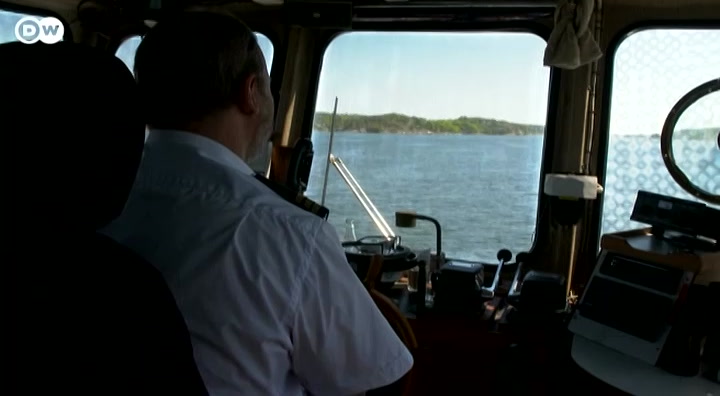 the boat calmly navigating it through narrow channels. these friends are enjoying the fantastic view to philip hannah and louisa are on a day trip to glinda island. if you've got something like this right on your doorstep, you really don't need to travel far. many swedes have also decided to spend their summer vacation at home this year. prior to the stock hallmark capella, go is still beautiful. everyone's rocking here, and there are wonderful islands, water and cliffs, been sunday at 10th. and there are still other parts of sweden that are simply magical, august stem. i can look up to note, you can go hiking in the north or lie on the beach in the south. there are plenty of gorgeous spots. the crew is preparing to dock spots is one of the last destinations on today's trip. let's talk home archipelago is about 50 kilometers from the capital i,
1:54 am 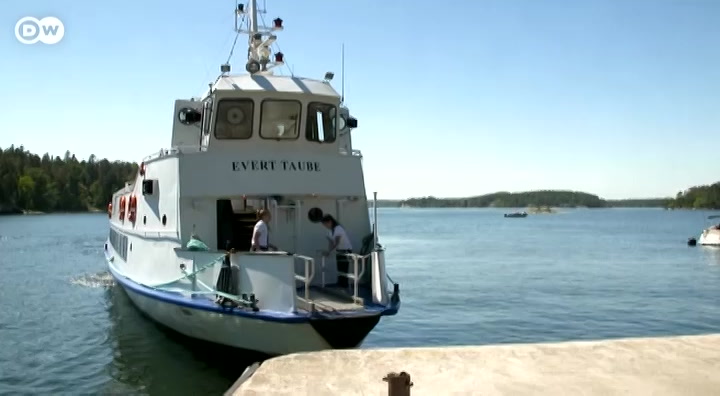 anton lucas, max and magnus are also on an adventure, at least for a few days. they worked for a large firm. but today they've swapped their office computers for some kayaks they're taking the boats and tends to fin hum. nearby island be fixed for coffee house will be holding something of a meeting that had it. and it was working on a project together. and this will be a small workshop. so we're mixing business with some pleasure, you know, like they're also working from home right now, taking their jobs with them into the outdoors opens whole new horizons for them. right. we're to said corona, that's corona has brought
1:55 am 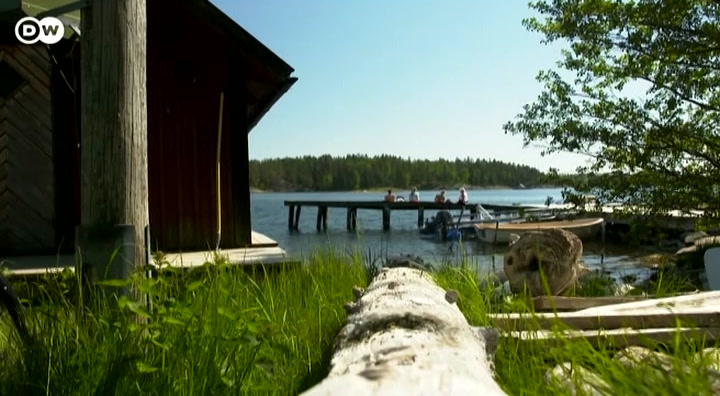 a veritable boom to the island of spots. johan se thing grew up here. he works in the city, but comes out on weekend to rent his kayaks, the water through with mortgage last year. many people moved into the summer homes on the island. they didn't have to keep commuting to the office on instead work from here. it's almost the cost. i meant a huge upswing for the business is on the island. the coach thing for the for are putting their boat to water. they want to enjoy the peace of their natural surroundings. so its full speed ahead for an escape and the great outdoors of stock homes archipelago alex, absolutely fantastic. beautiful beautiful landscapes. but i'm afraid, don't see a lot on focus the europe this time round. thanks very much for joining us. and if you'd like to see any of our reports again, just go to our home page on the w dot. come to come back next time. brown,
1:56 am 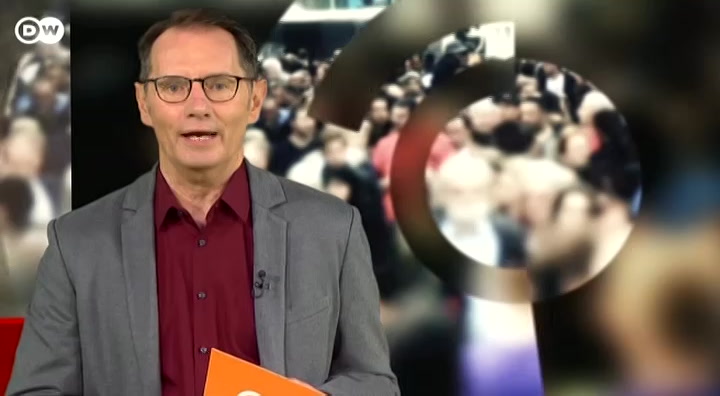 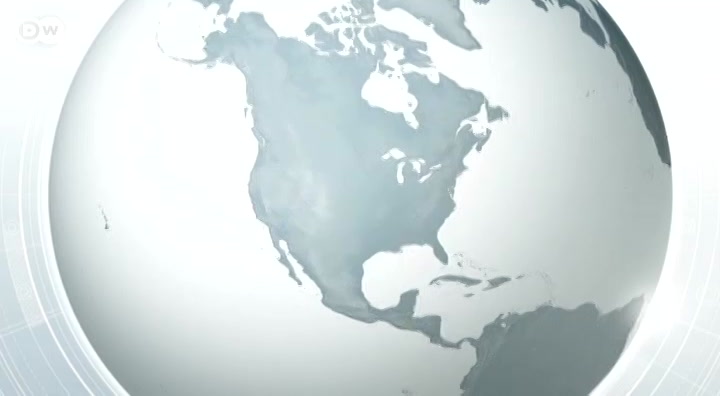 the news, the news, the all the president george w bush invited us to his summer home. we talked about the past and the special relationships to chancellor. ongoing. medical i know is not afraid to make a decision, was not afraid to leave the kind person with a lovely song. and that's a person i got to know the exclusive interview with george w bush in 30 minutes on d. w and his father was an anonymous band whose identity was a well,
1:58 am 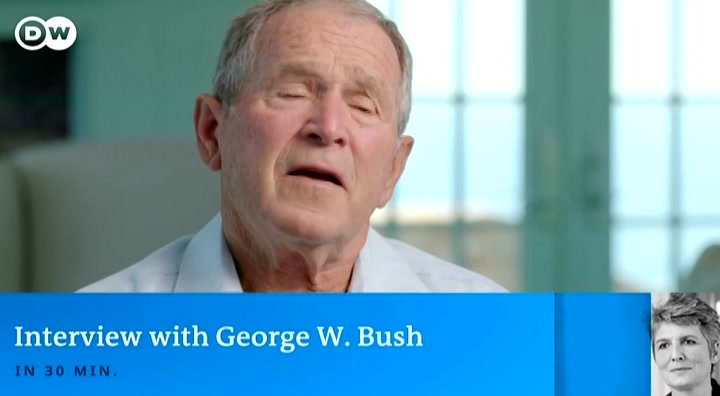 the stevens didn't give up. after a long sledge, he found his father and met them as his $600.00 fiddling majors. now he's on the west end and imitate the wealth. biggest family, the $75.00 is on the w ah. news to be on the on the as we take on the world the we're all about the stories that matter to the whatever it easement following
1:59 am 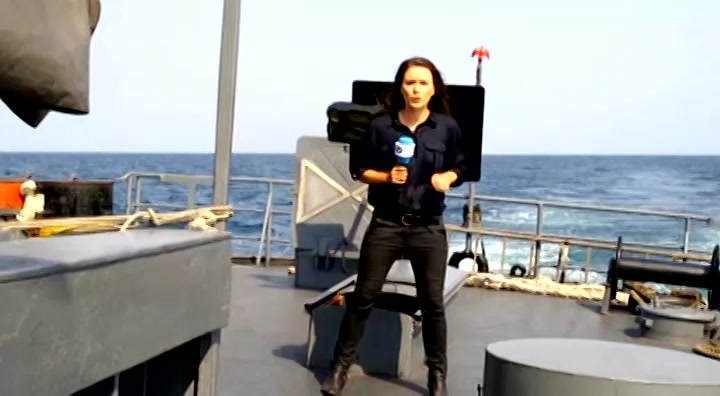 on fire made for mines. in december 2019, the european council president showed me shows embarked on a ground breaking mission. i have a clear ga to make your of the 1st dime jones on the planet by 2015 but not all member states supported and some persuasion. this requires a surprising glimpse into the very heart of power negotiations. lines. the monies tend to be a process. flattery and best laid plans
2:00 am 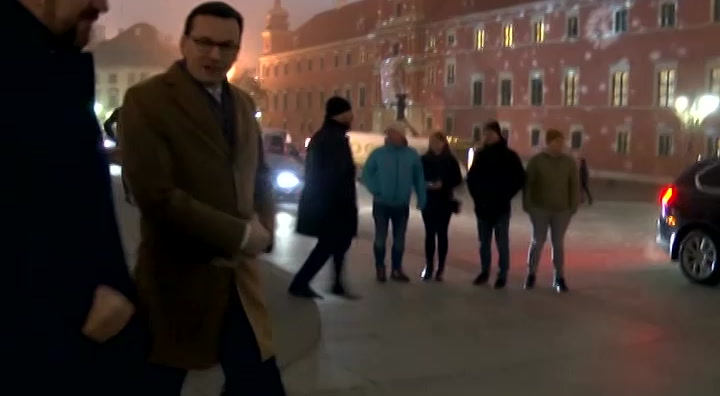 often go astray. most of will when the game of diplomatic poker use power, please, and alliances behind the climate. some it starts august on d, w, the o. d w names, and these are our top stories. european commission has unveiled sweeping new climate legislation. the fit for $55.00 proposal aims to cut the greenhouse gas emissions by 55 percent. by the year 2030 years, most ambitious plan yet to tackle climate change. but environmental activists say the package doesn't go far enough company to me. widespread moving across parts of south.
left
right
Borrow Program
tv