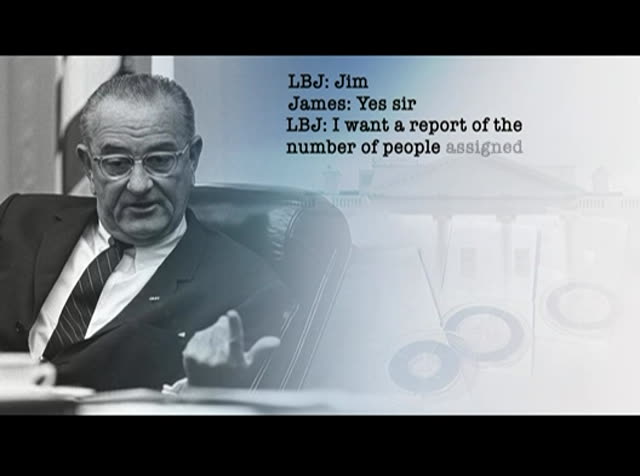 >> presidential recordings, find it on the c-span now mobile app or wherever you get your podcast. >> the u.s. supreme court today overturned the 1973 roe v. wade decision, recognizing a woman's constitutional right to have an abortion. you'll next hear reaction from president biden followed by house minority leader kevin mccarthy and other republicans as well as house speaker nancy pelosi.
3:40 pm 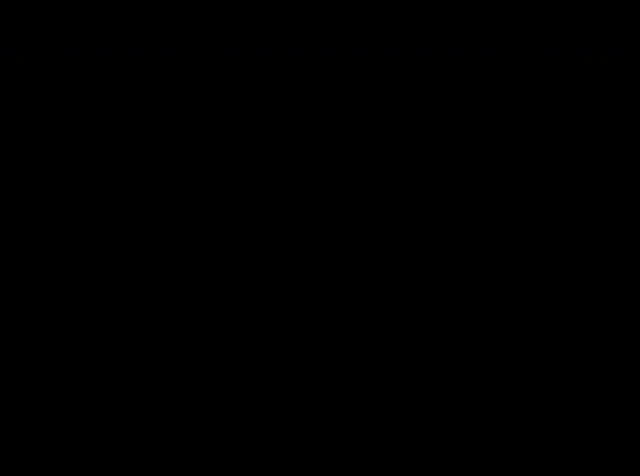 president biden: today is a, it's not hyperbole to suggest a very solemn moment. today the supreme court of united states expressly took away the constitutional right from the american people that it already recognized. it didn't limit it, it simply took it away. that has never been done to a right so important to so many americans, but they did it. it's a sad day for the court and for the country. 50 years ago roe v. wade was decided, and it's been the law of the land since then. this landmark case protected a woman's right to choose, her right to make intensely personal decisions with her doctor free from interference of politics. it reaffirmed basic principles of equality, that women have the power to control their own
3:41 pm 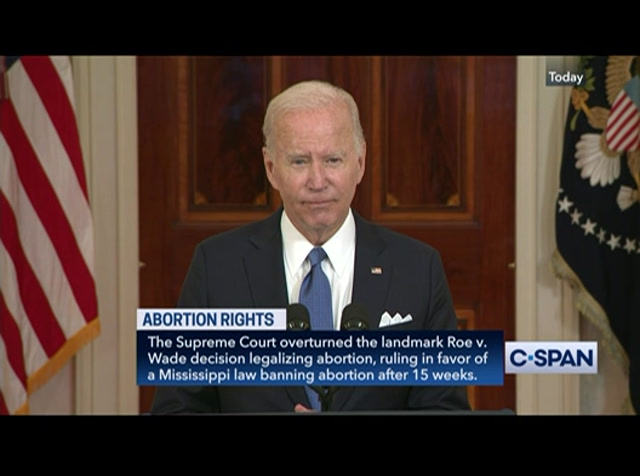 destiny, and it reinforced a fundamental right of privacy, the right of each of us to choose how to live our lives. now with roe gone, let's be very clear. the health and life of women in this nation are now at risk. as chairman and ranking member of the senate judiciary committee, as vice president, now as president of the united states, i've studied this case carefully. i've overseen more supreme court confirmations than anyone today. this case was always discussed. i believe roe v. wade was the correct decision as a matter of constitutional law and application of the fundamental right to privacy and liberty in matters of family and personal autonomy. with the decision on a complex matter. it drew a careful balance between a woman's right to choose early in her pregnancy and the state's ability to
3:42 pm 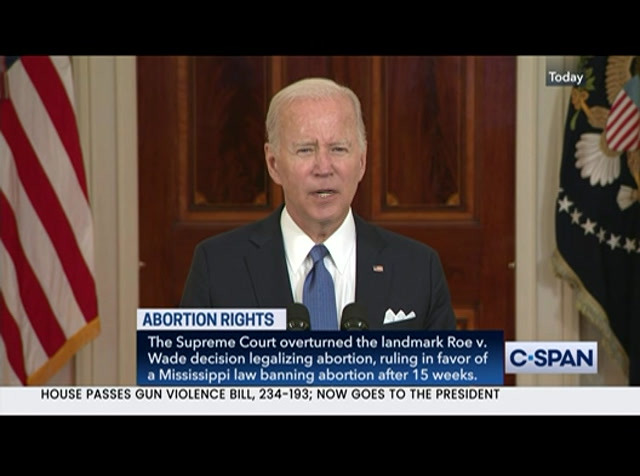 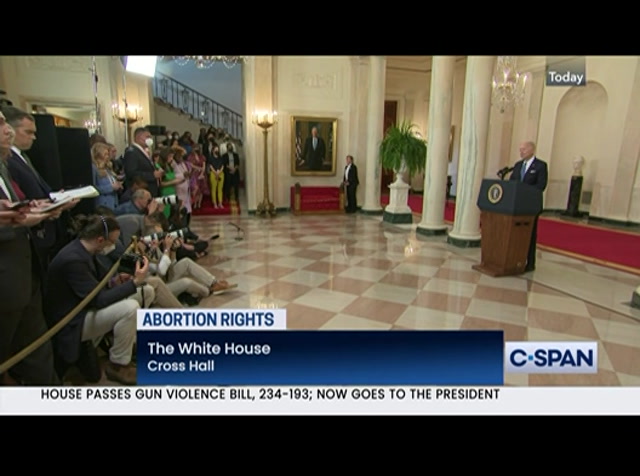 who were the core of today's decision to upend the scales of justice and eliminate a fundamental right for women in this country. make no mistake, this decision is a culmination of a deliberate effort over decades to upset the balance of our law. it's the realization of extreme ideology and a tragic error by the supreme court, in my view. the court has done what it has never done before, expressly take away a constitutional right that is so fundamental to so many americans that had already been recognized. the court's decision to do so will have real and immediate consequences. state laws banning abortion are automatically taking effect today jeopardizing the health of millions of women, some without exceptions. is so extreme that women can be punished for protecting their health. so extreme that women and girls
3:44 pm 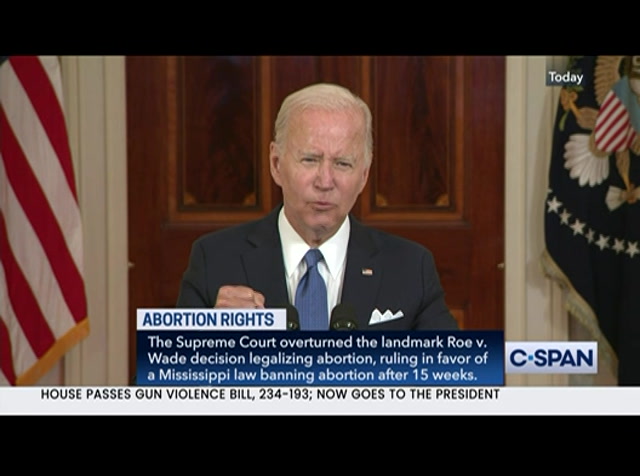 are forced to bear their rapist's child, the child of consequence. it just stuns me. so extreme that doctors will be criminalized for fulfilling their duty to care. imagine having a young woman have to carry a child of incest, as a consequence of incest with no option. too often the case the poor women are going to be hit the hardest. it's cruel. in fact, the court laid out state laws criminalizing abortion that go back to the 1800's as rationale. the court literally taking america back 150 years. it's a sad day for the country, in my view.
3:45 pm 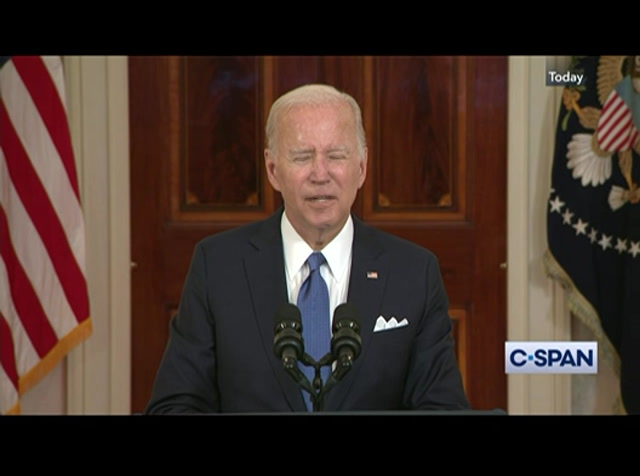 but it doesn't mean the fight's over. let me be very clear and unambiguous. the only way we can secure a woman's right to choose, the balance that existed, is for congress to restore the protections of roe v. wade as federal law. no executive action from the president can do that. and congress, as it appears, lacks the votes to do that now. voters need to make their voices heard. this fall we must elect more senators and representatives who will codify a woman's right to choose into federal law once again, elect more state leaders to protect this right at local -- at the local level. we need to restore the protectionses of roe as law of the land. we need to elect officials who will do that. this fall roe is on the ballot.
3:46 pm 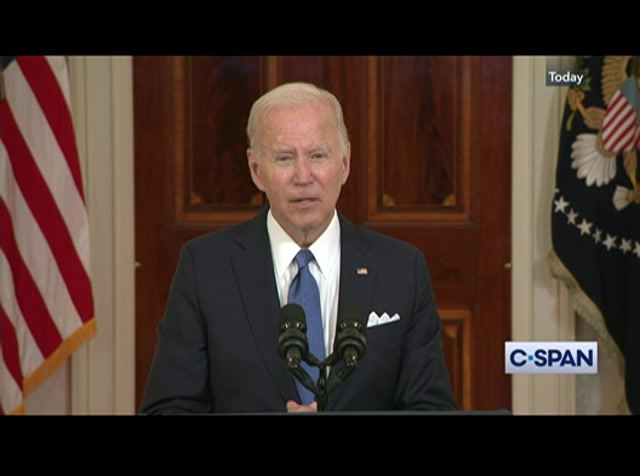 personal freedoms are on the ballot. the right to privacy, liberty, equality. they're all on the ballot. until then, i will do all in my a power to protect a woman's right in states where they will face the consequences of today's decision. the court's decision casts a dark shadow over a large swath of the land, many states in this country still recognize a woman's right to choose. so if a woman lives in a state that restricts abortion, the supreme court's decision does the not prevent her from traveling from her home state to the state that allows it. it does not prevent a doctor in that state from treating her. as the attorney general has made clear, women must remain free to travel safely to another state to seek care they need. my administration will defend
3:47 pm 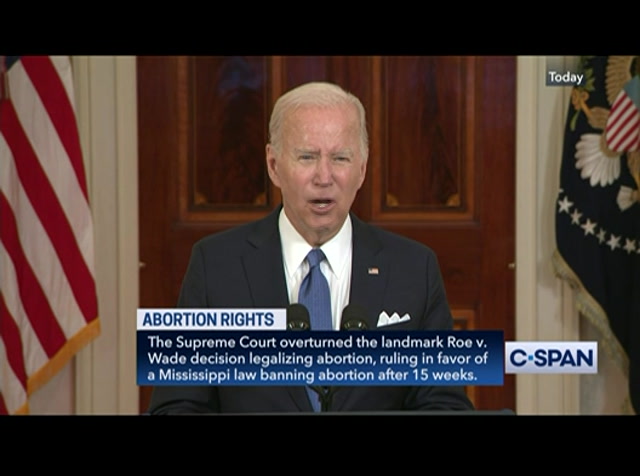 that bedrock right. any state or local official high or low tries to interfere with a woman exercising her basic right to travel, i will do everything in my power to fight that deeply un-american attack. my administration will also protect a woman's access to medications that are approved by the food and drug administration, the f.d.a., like contraception, which is essential for preventative health care. the f.d.a. approved 20 years to safely end early pregnancy and is commonly used to treat miscarriages. some states are saying that they'll try to ban or severely restrict access to these medications. but with extremist governors and state legislators are looking to block the mail or search a person's medicine cabinet or control a woman's actions by tracking data on the apps she
3:48 pm 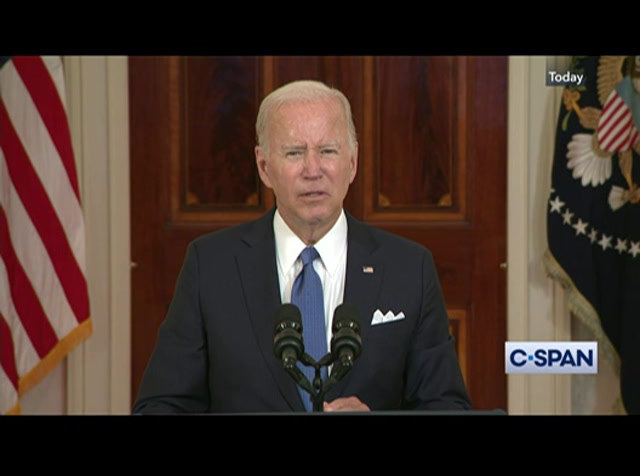 uses are wrong and extreme and out of touch with the majority of americans. the american medical association, the american college of obstetricians and gynecologists wrote to me and vice president harris stressing that these laws are not based on -- are not based on evidence and asking us to protect access to care. they say by limiting access to these medicines, maternal mortality will climb in america. that's what they say. today i'm directing the department of health and human services to take steps to ensure these critical medications are available to the fullest extent possible. and the politicians cannot interfere in the decisions that should be made between a woman and her doctor. my administration will remain vigilant as the implications of this decision play out. i've warned about how this
3:49 pm 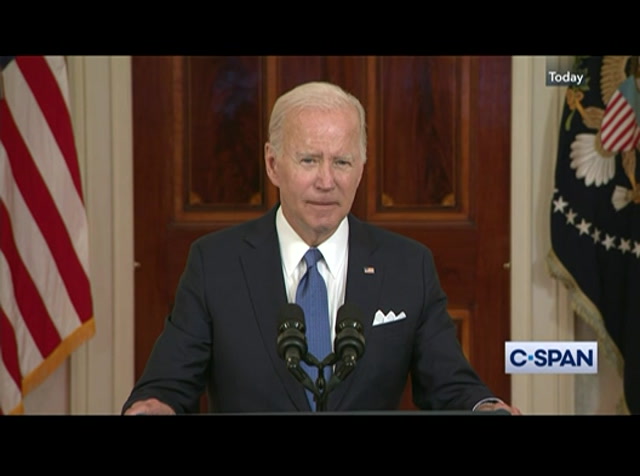 decision risks the broader right the privacy for everyone. that's because roe recognized the fundamental right to privacy that has served as a basis for so many more rights that have come to take -- we've come to take for granted that are ingrained in the fabric of this country. the right to make best decisions for your health, the right to use birth control, a majority -- a married couple in the privacy of their bedroom, for god's sake, the right to marry the person you love. justice thomas said as much today. he explicitly called to reconsider the right of marriage equality, the right of couples to make their choices on contraception. this extreme and dangerous path the court is now taking us on. let me close with two points. first, i call on everyone no matter how deeply they care
3:50 pm 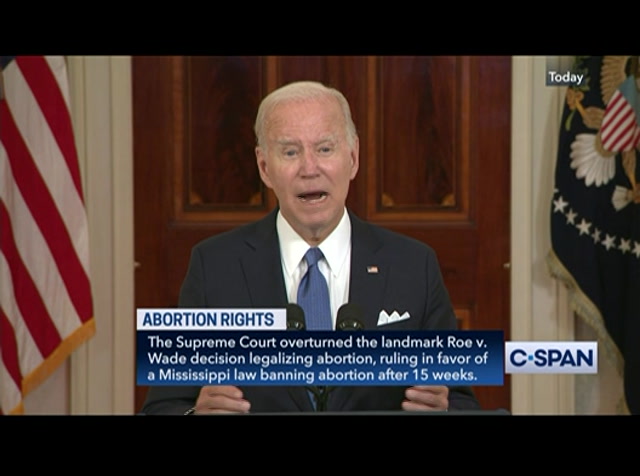 about this decision to keep all protests peaceful. peaceful, peaceful, peaceful. no intimidation. violence is never acceptable. threats and intimidation are not speech. were we must stand against violence in any form. regardless of your rationale. second, i know so many of us are frustrated and disillusioned that the court has taken something away that's so fundamental. i know so many women are now going to face incredibly difficult situations. i hear you. i support you. i stand with you. the consequences and the consensus of the american people, core principles of equality, liberty, dignity, and the stability of the
3:51 pm 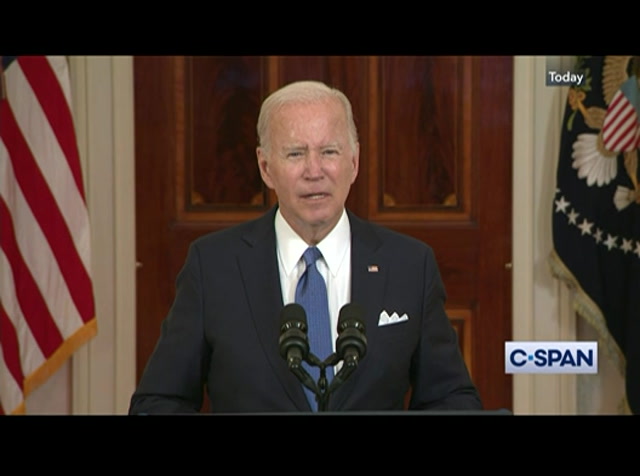 rule of law demand that roe should not have been overturned. but this decision -- with this decision, the conservative majority of the supreme court showed how extreme it is, how far removed they are from the majority of this country. it made the united states an outlier among developed nations in the world. this decision must not be the final word. my administration will use all of its appropriate lawful powers, but congress must act. and with your vote, you can act. you can have the final word. this is not over. thank you very much. i'll have more to say in the weeks to come. [captions copyright national cable satellite corp. 2022] [captioning performed by the national captioning institute, which is responsible for its caption content and accuracy. visit ncicap.org]
left
right
Borrow Program
tv

President Biden said it was a "sad day for the court and the country" and warned "the health and life of women of this nation are now at risk." His remarks came after the Supreme Court voted to overturn the landmark Roe v. Wade decision, which protected women's rights to an abortion. The president called on Congress to pass federal legislation protecting abortion rights, and he said the Department of Health and Human Services would ensure the availability of contraception. President Biden also implored protesters to remain peaceful saying, "violence is never acceptable."