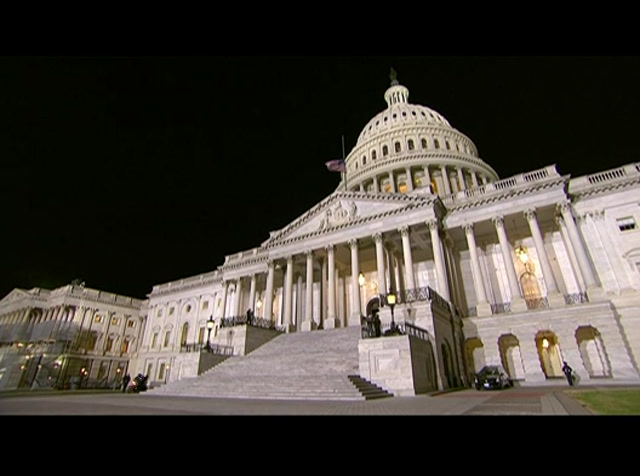 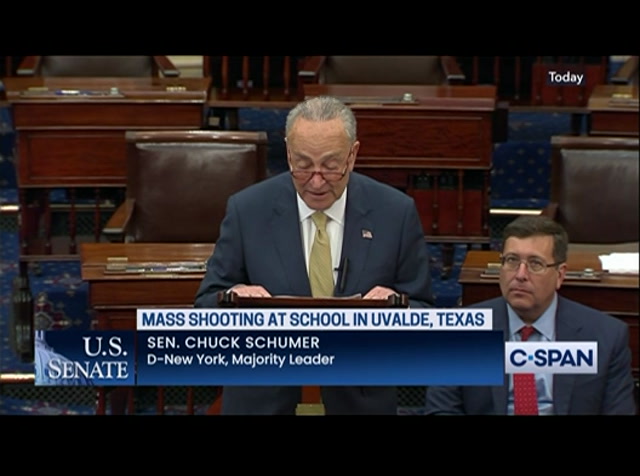 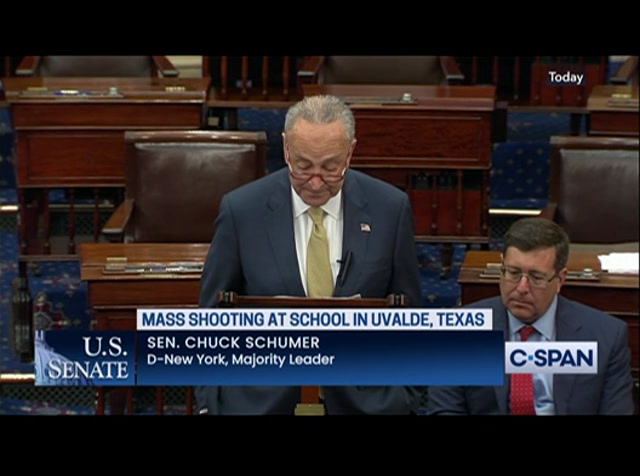 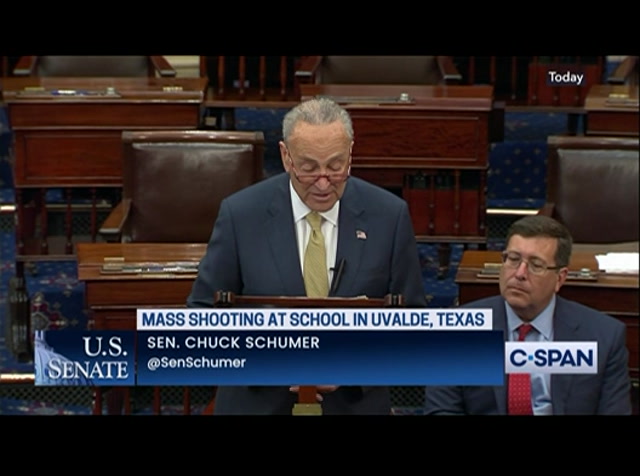 yourself in the shoes of these parents instead of in the arms
1:04 am 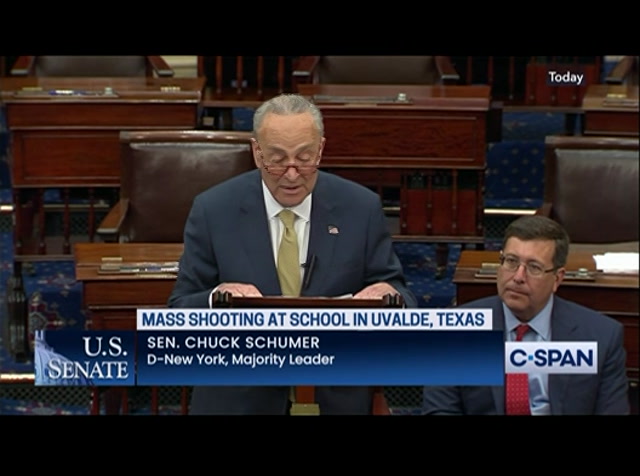 of the n.r.a. -- might let you wriggle free from the vice-like grip of the n.r.a., might free you to act on even a simple measure. for the sake of these children, these nine-year olds, these ten-year olds, these 11-year olds, please, damn it, think of what you would do if it was your child or grandchild. now, madam president, it wasn't always this way in congress. nearly 30 years ago i was proud to be the author of the brady bill and a leader of the assault weapons bans. these were major legislative accomplishments and they worked because they were good commonsense laws and they passed because both sides of the aisle worked together. and because they became law, tens of thousands, hundreds of thousands perhaps lives were saved -- children, elderly people, people of color, you name it. people now walking the streets
1:05 am 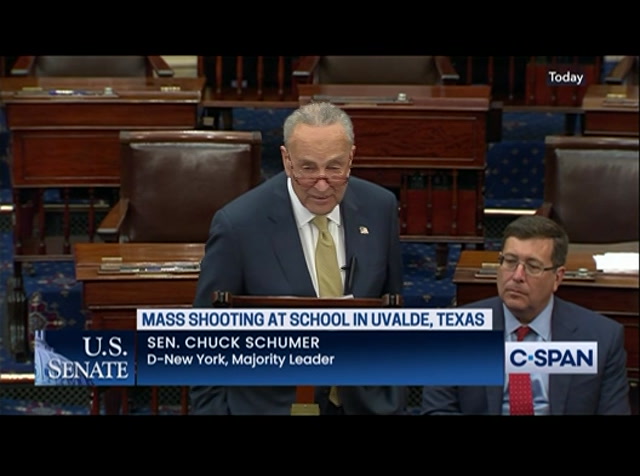 who might have been dead had we not passed these laws. but today the n.r.a. has made it all but impossible for even the bare minimum to move forward in congress, and the other side is all too ready to bow in obeisance to the n.r.a. and service to their whims. madam president, these types of shootings used to be rare, so rare in fact that each occurrence stood apart as a singular event. but now these shootings happen so frequently that the nation can barely keep up, barely mourn the ten people shot in the grocery store in buffalo before being rocked to our collective core by the slaughter of 19 elementary school children in a predominantly latino community of uvalde, texas. these shootings happen everywhere -- movie theaters,
1:06 am 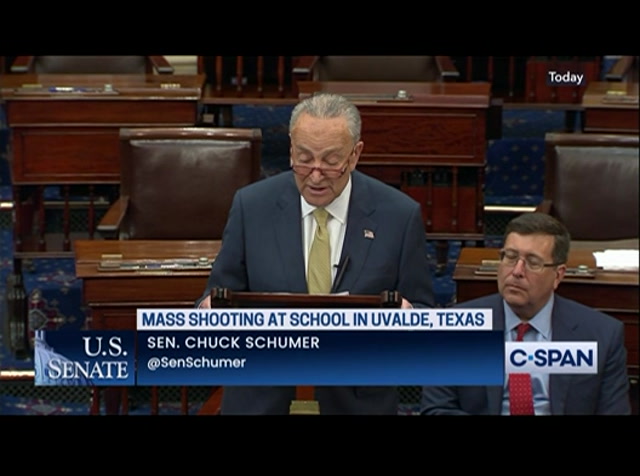 grocery stores, colleges campuses, high schools, elementary schools, elementary schools with beautiful children getting ready to move out into the prime of life. honestly, i thought sandy hook ten years ago would be the breaking point. i thought that that would be the tragedy that forced republicans to examine their conscience and think oh god, we can't allow schoolchildren to be slaughtered. well, i was wrong. the slaughter of 20 elementary school children in sandy hook didn't move them. we heard about their thoughts and their prayers, but no action. then came aurora and the navy yard. then after charleston, i thought maybe this, maybe this is the moment -- nine americans shot in a church during bible study, this has to move the republicans here in the senate.
1:07 am 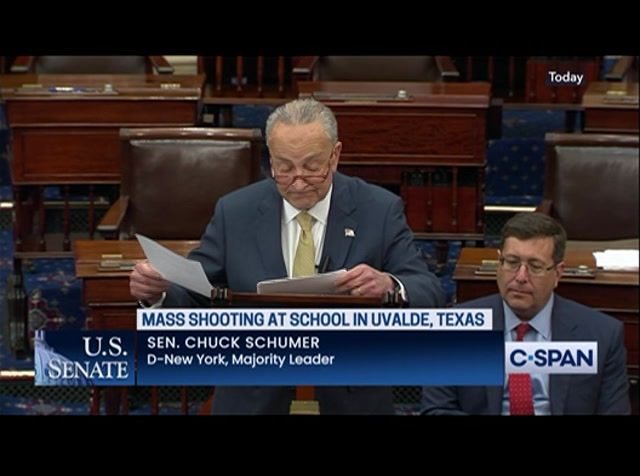 no, it didn't. they gave a few more thoughts, a few more prayers, no real effort to solve the problem. and so, madam president, it continued on and on and on. san bernardino, orlando, las vegas, sutherland springs, marjorie stone man douglas high school. thousand oaks, the el paso walmart, dayton, virginia beach, boulder, buffalo, and now uvalde. when will it end? we must act -- action. not thoughts and prayers, action. after the shootings in el paso and dayton three years ago, the republican leader promised that red flag laws and background checks would be front and center in the senate debate. he was then majority leader. but then the republicans did nothing. they ensured there was no debate, just as they wanted.
1:08 am 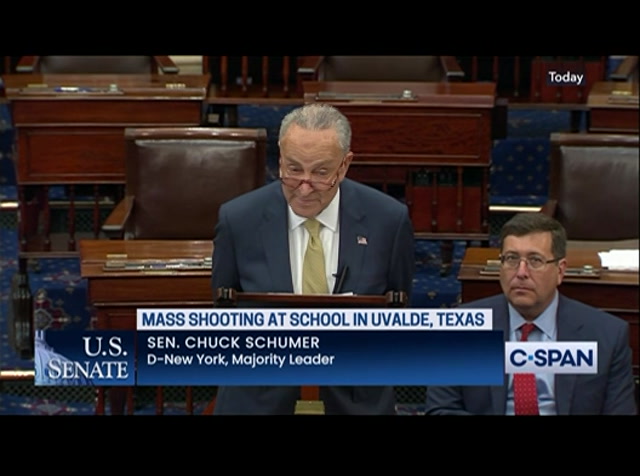 they don't want to debate this issue. indeed, we hear -- all we hear from republicans are thoughts, prayers, and now there's a new phrase. now some of my republican colleagues want to lift up the community. that sounds heartening, but it does absolutely nothing, nothing, to prevent the next family from having to grieve for their loss. and it won't do a single damn thing to prevent another life from being taken. it won't do a single damn thing to prevent another child from being shot at school, a 9-year-olds, a 10-year-old, an 11-year-old, beautiful children. and madam president, you may have noticed that when they aren't offering thoughts and prayers to distract from their inaction, many of my republican colleagues focus on the motives of the shooters instead of focusing on the obvious common denominator. they talk about the real villain
1:09 am 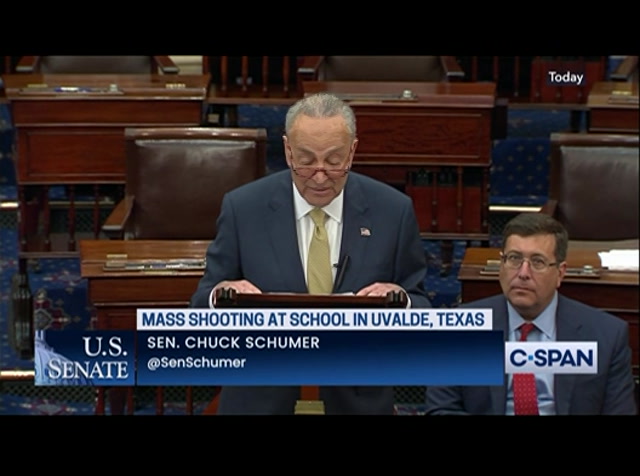 being mental illness, and say nothing about the fact that we are a nation suffocated by firearms. rates of mental illness are the same across the world. the u.s. is not an outliar on mental illness, but we are an outlier in the sheer number of guns available in this country. that is why we have so many shootings and other western countries don't. if mental illness were the simple cause, you'd see mass shootings happening all over the developed world, but you don't. what you do see in america are enough guns to give every man, woman and child in this nation a firearm and still have nearly 70 million guns left over. you do see is that it's far too easy for people to access weapons in this country, then to use them to slaughter people, to slaughter children by the dozens. by the dozens. again, america doesn't stand out when it comes to the rate of
1:10 am 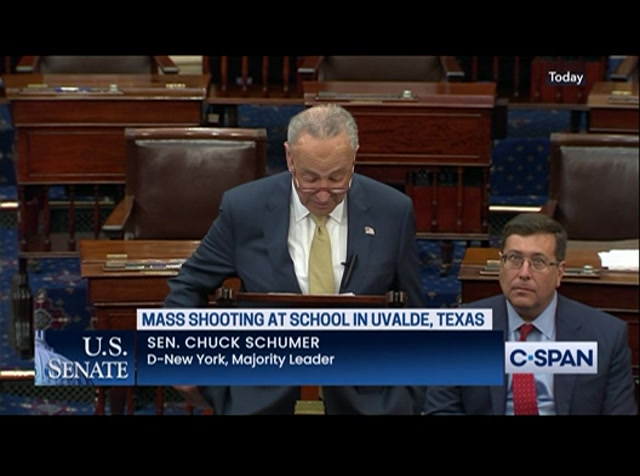 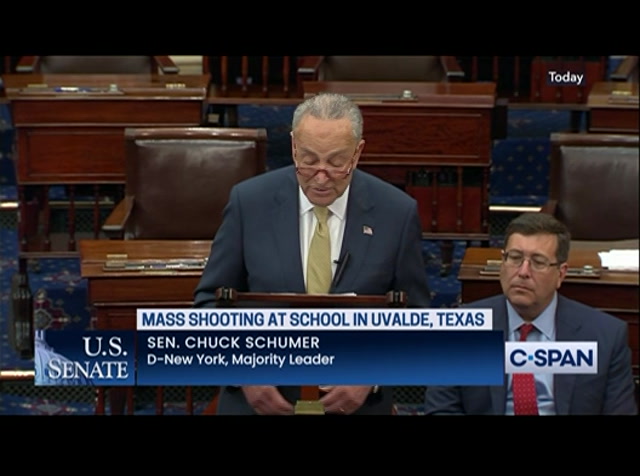 coworkers and parisher ins who lost wello worshipers don't juss don't just care whether the shooter wrote a manifesto. they care whether the shooter had ready access to a gun. they care that their loved ones had been taken from them by someone who had access to a gun. taken from them while some members of this body refuse to do what it takes to prevent those losses, refuse to focus on the denominator to every single one of these shootings. refuse to even do the bare minimum as they bow in obeisance to the wretched n.r.a. what do we do about it? if the slaughter of schoolchildren can't convince republican to buck the n.r.a., what can we do? there are some who want this body to quickly vote on sensible
1:12 am 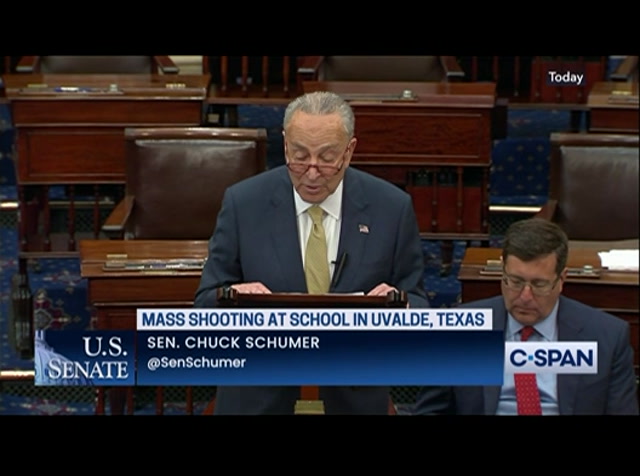 gun safety legislation, legislation supported by the vast majority of americans, democrats, republicans, and independents alike. they want to see this body vote quickly so the american people can know which side each senator is on, which side each senator is on. i'm sympathetic to that, and i believe that accountability votes are important. but sadly, this isn't a case of the american people not knowing where their senators stand. they know. they know because my republican colleagues are perfectly clear on this issue, crystal clear. republicans don't pretend that they support sensible gun safety legislation. they don't pretend to be moved by the fact that 90% of americans, regardless of party, support something as common sense as background checks, that the vast majority of gun owners support the background checks bill. they don't pretend that they
1:13 am 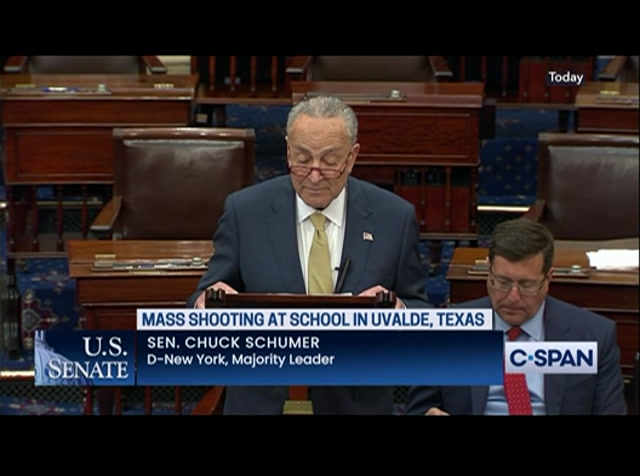 want to keep guns out of the hands of those who might use weapons to shoot concert go-ers, movie watchers, shoppers, or children. they don't pretend at all. just listen to them when they show up in obeisance to the n.r.a. at the n.r.a.'s convention in houston, the same state as uvalde, on friday. they'll offer their thoughts and prayers. they'll say they want to lift up the community. and then they'll go back to their smoke-filled rooms and assure the n.r.a. and gun manufacturers that nothing will change, that they've got the n.r.a.'s back. no, madam president, no, this isn't a case of republicans hiding their position. they proudly tell the american people which side they're on. and america is much worse off for it. and if nothing does change, we're condemned to find
1:14 am 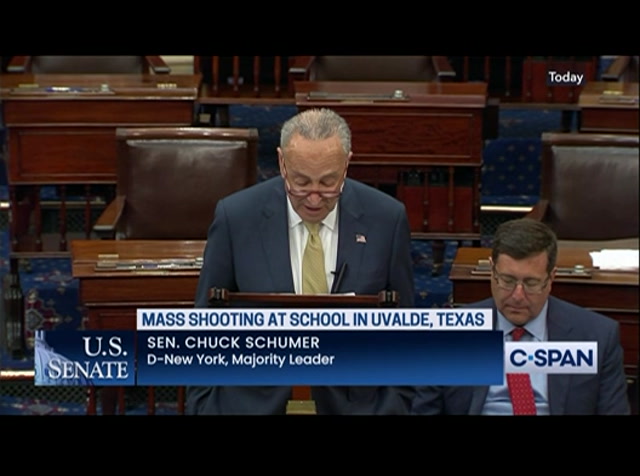 ourselves right here once again very, very soon. as i was reading the reports of the tragedy in texas, i saw that amanda gorman, the young woman who mesmerized the nation at president biden's inauguration tweeted, the truth is, one nation under guns. one nation under guns. that is simply heartbreaking -- heartbreaking to think that this is the legacy that older generations are leaving behind for young americans. one nation under guns. it doesn't have to be that way. our parents don't need to drop their kids off at school and wonder if their kid will be next. that's in the thoughts of millions of moms and dads right now. our citizens don't have to endure the fear of getting groceries while constantly keeping an eye behind their backs. again, millions of americans are worried about that right now. americans can make a choice.
1:15 am 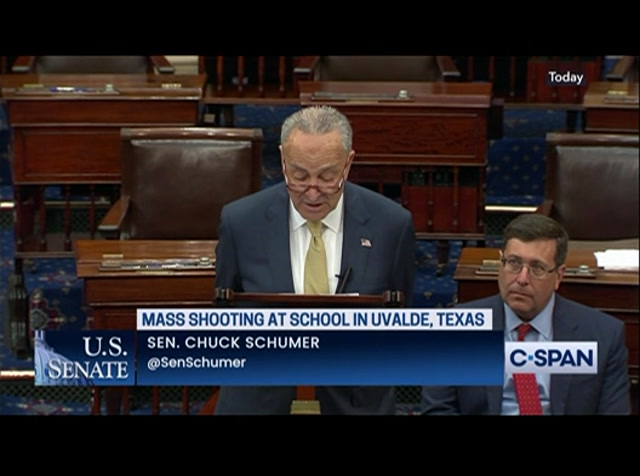 americans can reject the republican guns at all costs doctrine, obeisance to the n.r.a., not even voting for the most simple, sensitive, positive, and popular gun legislation. americans can cast their vote in november for senators or members of congress that reflect how he or she stands with guns, with this issue, this issue, at the top of the voters' lists. in the meantime, my republican colleagues can work with us now. i know this is a slim prospect, very slim, all too slim. we've been burnt so many times before. but this is so important, and i have such a firm belief, taught to me by my late father, who passed was he in november, that if you do the right thing and persist, justice will eventually prevail. but you got to keep persisting, and we will. and for that reason alone, we must pursue action, and even ask republicans again to join us.
1:16 am 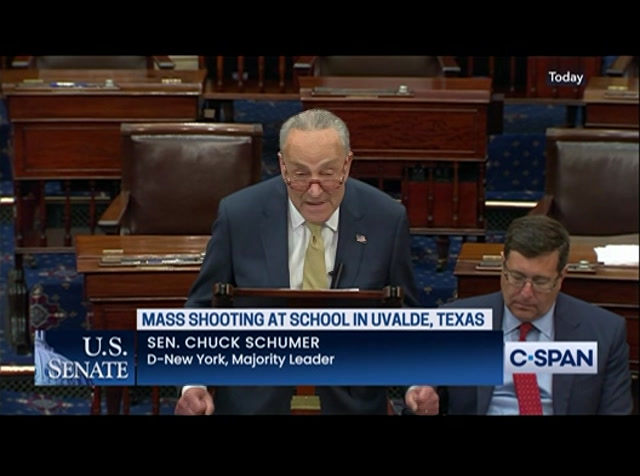 maybe, maybe, maybe. unlikely, burnt in the past, but their hearts might see what has happened and join us, do the right thing. they know it's the right thing. they can work with us to craft legislation that would prevent needless loss of life. it's their choice. as majority leader, i haven't been shy about putting bipartisan legislation on the floor for a vote, but bipartisanship means both parties must engage in crafting a bill, like happened in the house and senate 30 years ago, with the brady law and the assault weapons ban. democrats have been trying to work hard with republicans. senator murphy, senator manchin, on legislation that will eventually pass and become law. the other side has refused. there are so many options available to us. so many ideas. we just need some brave republicans to stand before
1:17 am 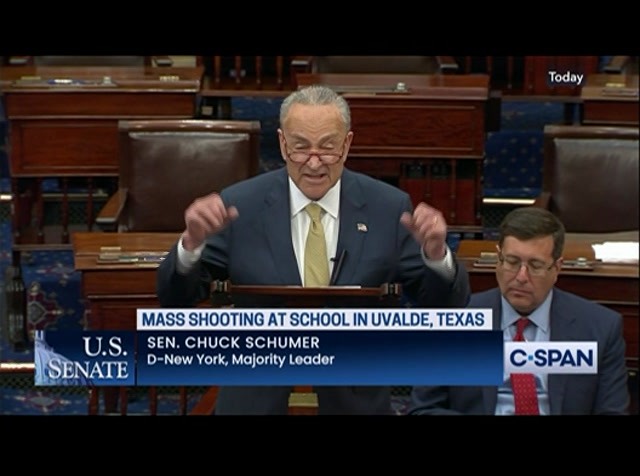 history and yell stop. to think, if it was your child, your grandchild, how would you feel, and woulded -- and build that move you to do something, something about this plague of guns? like my colleague, senator murphy, i refuse to believe that we cannot find a path forward. make no mistake about it, if we can't find a good, strong bill that has bipartisan support, we will continue to pursue this issue on our own. we have no choice. it's too important. lives are at stake. and i accept the fact that most of my republicans are not willing to do what it takes to present this needless loss of life. the n.r.a. will have a hold on them. that's just a reality, unfortunately. but it is unacceptable to the american people to think that there are not ten of my republican colleagues, just ten, one out of five over here, who
1:18 am 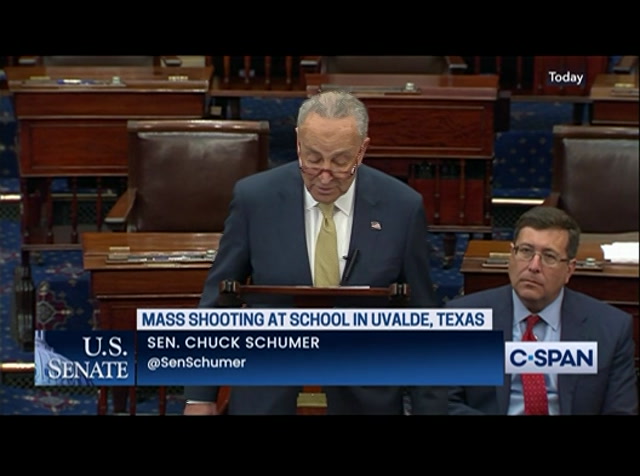 would be ready to work to pass something that would reduce this plague of gun violence. it's unacceptable that there are not ten members of the republican caucus willing to save lives, find a way to do it. and yet, that's where we are. that's where we are. another week, another american community devastated by mass shootings. all of us thinking of these nine and ten and 11-year-old children, just shot, gone! another american community, uvalde, which will never recover, like the other communities before it. will it yet be uvalde, another example of republicans unwilling to do what it takes
left
right
Borrow Program
tv