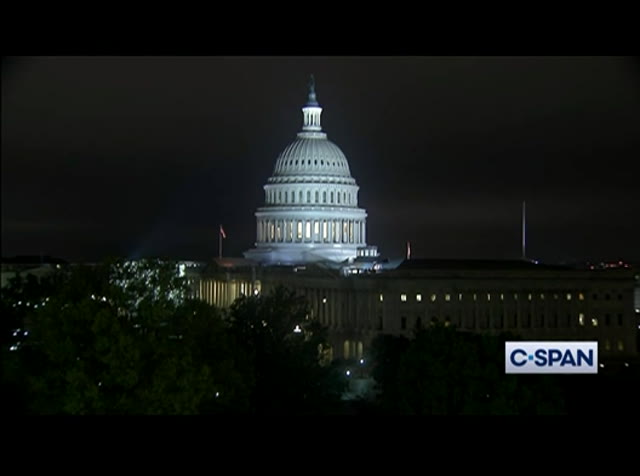 were sworn in as new members of the house of representatives and conditional -- and congressional races. republicans might carry will represent the people of ohio's 15th district, replacing a former representative. the house a communication. the clerk: the honorable the speaker, house of representatives, madam, i have the honor to transmit here with scanned copies of a letter received from ms. amanda m.franjin, esquire, deputy of elections, ohio office of secretary of state, indicating that according to the unofficial result of the special congressional general election held november 2, 2021, the honorable chantalm. brown was
6:47 am 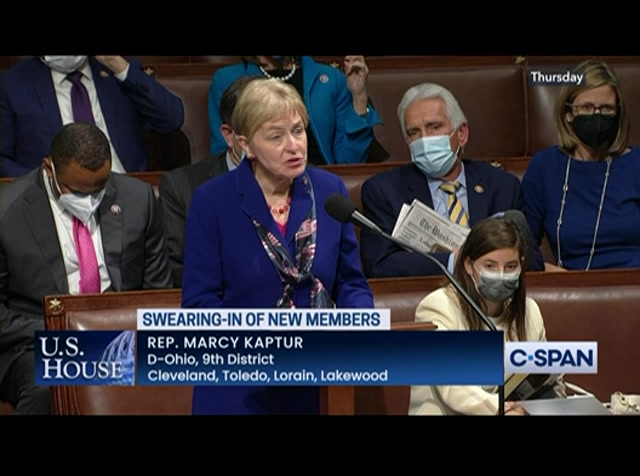 elected to representative of congress for the 11th direct and the honorable mike kerry was elected to congress for the 15th congressional district state of ohio. signed, sincerely, cheryl l. johnson clerk. the speaker pro tempore: for what purpose does the gentlewoman from ohio seek recognition? ms. kaptur: i ask unanimous consent that the gentlewoman from ohio, the honorable chanal brown, and the gentleman from ohio, the honorable mike brown, be allowed to take the oaths of office. the certificates of their election have not arrived but there is no contest with regard to their elections. the speaker pro tempore: without objection. will representatives brown and kerry and the representatives of the highway delegation present themselves in the well. all members will rise and the representatives-elect will
6:48 am 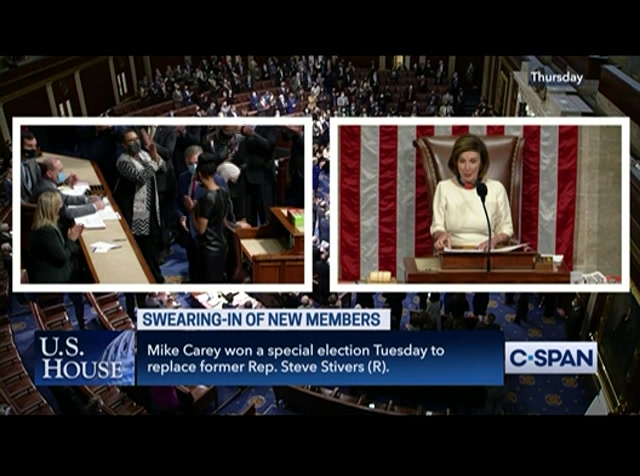 please raise their right hand. do you solemnly swear that you will support and defend the constitution of the united states against all enemies foreign and domestic that you will bear true faith and allegiance to the same, that you take thobl gages freely without any meantal reservation or purpose of evasion, and that you will well and faithfully discharge the duties of the office on which you are about to enter, so help you god. congratulations, you are now member of the 117th congress. the speaker: without objection, the gentlewoman from ohio, ms. kaptur is recognized for one
6:49 am 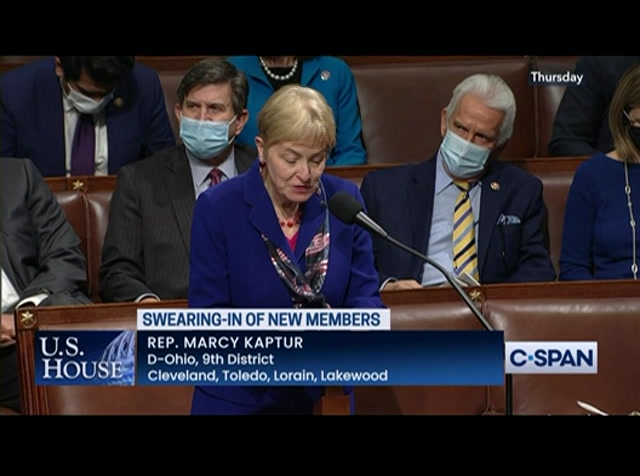 minute. ms. kaptur: thank you. thank you, madam speaker. today we welcome representative chantal brown of ohio's 11th cop gretional district to the halls of congress, america's temple of democracy. representative brown's great lakes-northern ohio-cleveland region has weathered enormous challenges over the years. and now more than ever her intelligent, innovative, personable and collaborative leadership are needed. representative brown has a remarkable record of such accomplishments. she follows in the footsteps of former congresswoman and now h.u.d. secretary marcia fudge.
6:50 am 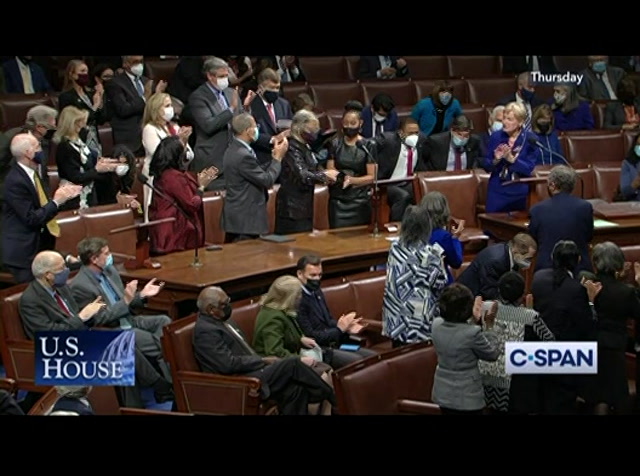 representative stephanie tubbs jones. and representative louis stokes. representative brown will now become the 5 #th member of the black caucus, a historic high for our nation. first as the warrensville city councilmember then as a chi hoe gay county -- cuyahoga county councilmember she's driven progress through health, human services and education at i every juncture to help
6:51 am 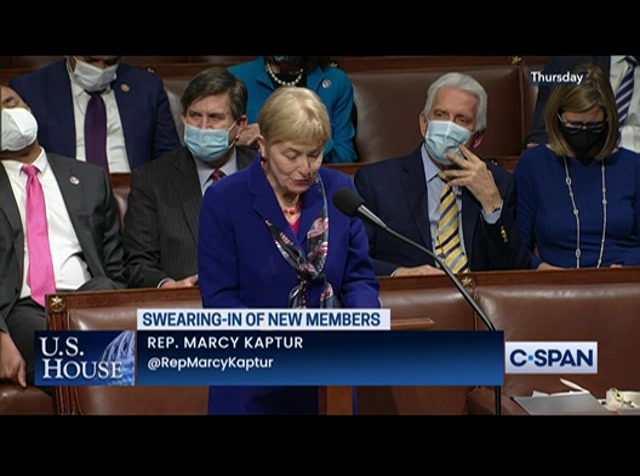 incentivize good-paying jobs. chantal knows well how importants for federal and local governments working with the private sector to improve the quality of life and increase opportunity, equity and justice for all. her relationships across northeast ohio are very deep and her commitment to serving greater cleveland and akron is dynamic and purposeful. ohio's buckie state congressional delegation is honored to welcome sparkling representative chantal brown, we stand ready to work work with you to deliver results for ohio and the american people. ms. brown: thank you, madam speaker. thank you, congresswoman kaptur, for your kind introduction. i rise as the newest representative for ohio's 11th
6:52 am 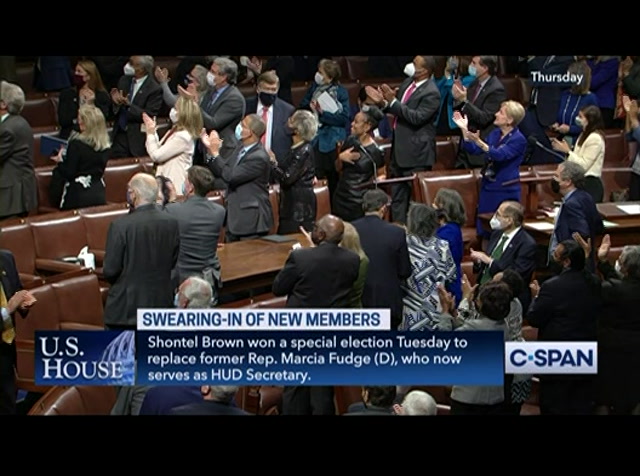 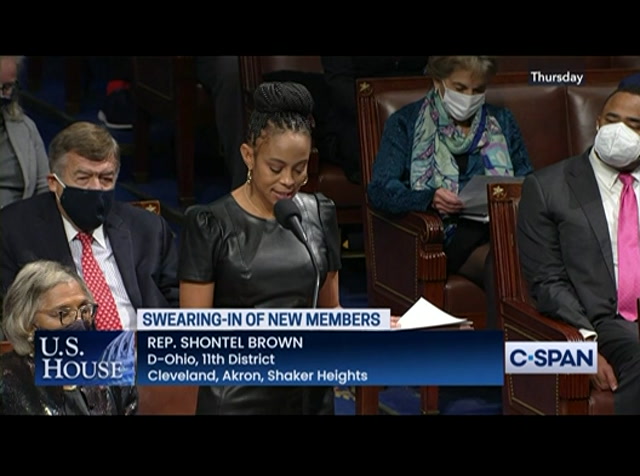 i am humbled and honored to have the privilege of serving you, the people of ohio 11th congressional district in the house of representatives, i take this responsibility seriously. i ran for congress because i believe in the resilience of the community i love and call home. because i believe that public service is always about putting the people first because i believe that now with the eyes of history upon us it is time to build a more just and more equitable future. these are the values i promise to hold close every day as i make your voice heard in congress, as i entered these haloed halls -- hallowed halls on the shoulders of my predecessor leaders like congressman louis stokes, congresswoman stephanie tubbs jones, and my mentor, my friend, h.u.d. secretary, marcia fudge.
6:54 am 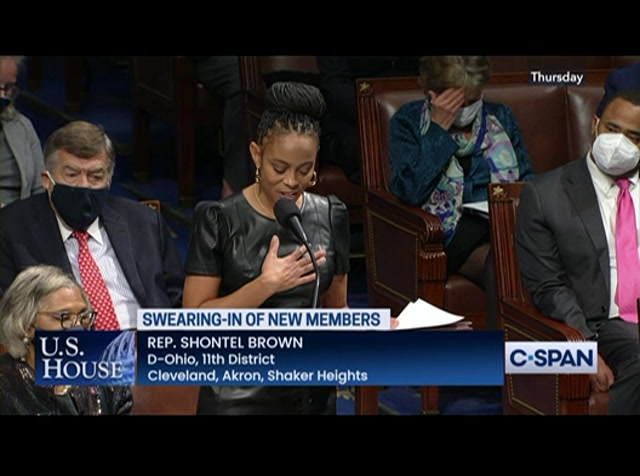 i vow to do the same work that she did as i vow to work for the people and be a voice of the people. as a proud clevelander i know that we are strong and that our work is to emerge from the pandemic stronger than ever. our work is to rebuild an economy that puts the dignity of working people first to protect the most vulnerable amongst us, to ensure every child has access to quality public education, to fight for a day where every person has a roof over their head and food on their plate to protect the rights to vote and to tackle the other great challenges of our time. i cannot wait to get to work with my colleagues in congress to deliver results for the people of northeast ohio and this great country. madam speaker, i yield back.
6:55 am 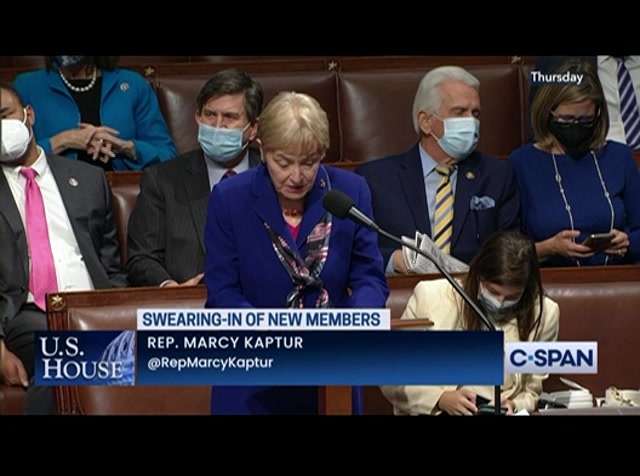 the speaker pro tempore: the gentlelady continues to be -- the speaker: the gentlelady continues to be recognized. ms. kaptur: today we have the additional distinct pleasure of welcoming representative mike carey of sabina, ohio, to the 117th congress and ohio's buckeye state congressional delegation. ohio is truly the industrial heartland of america and the 15th congressional district embodies our region's aspirations and struggles. the hardworking men and women of south central ohio hold high hopes they have sent representative mike carey to advance progress for ohio and america. we know he will champion the
6:56 am

cause of workers and families so all can succeed. we all can imagine how very proud his family and friends are at this unforgettable moment. pr asheurg americas' energy independence and deploying broadband internet, to rebuilding our roads, bridges, and power grid, representative mike carey will bring his experience to bear with the energy industry to move ohio and america forward. and secure good-paying jobs for the middle class. all of us here today are excited to welcome determined, dogged representative mike carey and to get to work delivering the new prosperity for which his constituents long across our great state and nation. thank you very much. i yield. mr. carey: thank you. thank you.
6:57 am 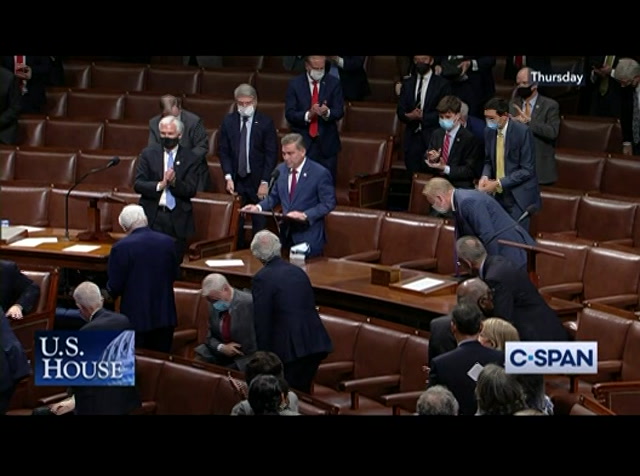 madam speaker, first i'm humbled to stand here today to serve in the people's house as a product of the small town of sabida ohio. i want to thank my family, my wonderful wife, megan, who is home with our young son, conrad, while we are preparing to welcome a new son into the world in just a couple of weeks. also my i credible son prescott, my brother chad, my loving mother deborah who are all here today in the gallery. to the people of ohio's 15th district, from our smallest towns to our state capital in columbus, i am truly honored
6:58 am 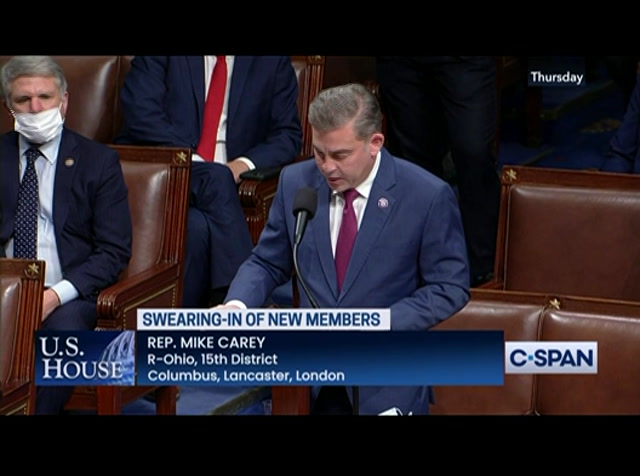 that you have entreys -- entrusted me with this solemn duty. whether you work on a farm, own a small business, or a large employer i promise to fight for our district and to represent you all with dignity and respect. the problems facing our nation today are great and consequential. working families need this body to deliver solutions. today i am ready to work for the people of my district and for this great nation. thank you. i yield back. the speaker: under clause 5-g of rule 20, the chair announces to the house in light of the administration of the oath of office to the gentlewoman and the gentleman from ohio, the
6:59 am 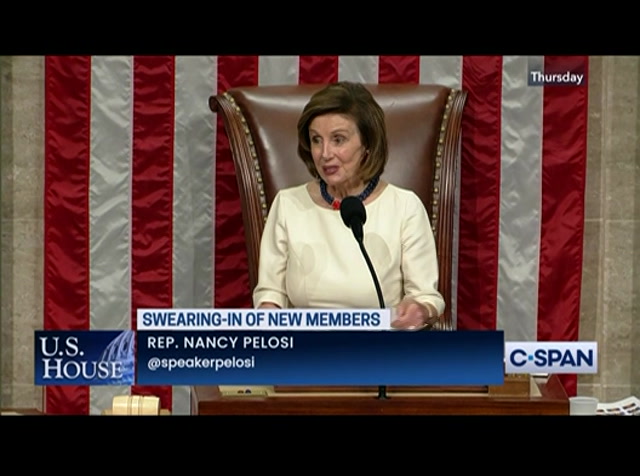 whole number of the house is now >> c-span is your unfiltered view of government, funded by these television companies and more, including media,. >> media, was ready. we never slowed down. schools and businesses went virtual and we powered a new reality. cap media, -- >> media, supports c-span as a public service along with these other public providers, giving you a front row seat to democracy. >> coming today on c-span, the house is back at 8:00 a.m.
left
right
Borrow Program
tv

Representatives-Elect Shontel Brown and Mike Carey were sworn in as new members of the House of Representatives after winning congressional races on Tuesday in Ohio. Democrat Shontel Brown takes the seat that was previously held by Housing and Urban Development Secretary Marcia Fudge in Ohio's 11th District and Republican Mike Carey will represent the people of Ohio's 15th District, replacing former Representative Steve Stivers. The total number of the House now stands at 434 members.