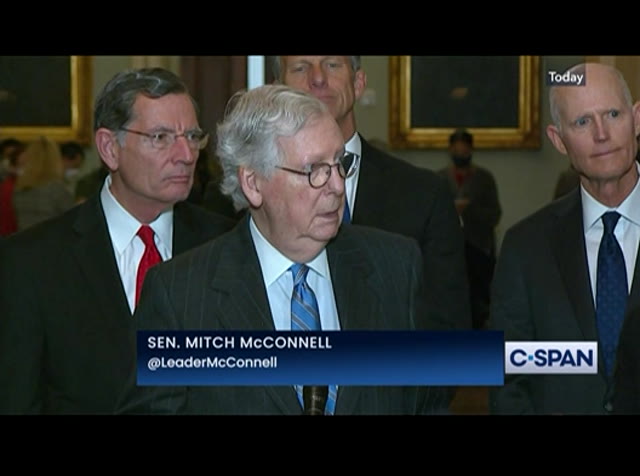 stands today, how would you expect -- sen. mcconnell: how the bill stands today? i don't know, do you? i'm pretty sure many of the democrats are not sure what it looks like either. what it seems to me is if the house passes the reckless taxing and spending bill, that will not be the final word. i think whatever can i get out of the senate, if anything can and i'm hopeful that i cannot, it will probably be the final bill. plan and a bipartisan infrastructure bill.
2:27 am 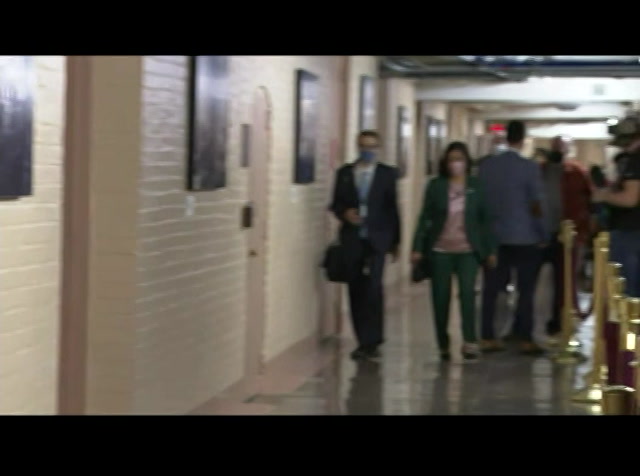 [captions copyright national cable satellite corp. 2021] [captioning performed by the national captioning institute, which is responsible for its caption content and accuracy. visit ncicap.org] >> what are your thoughts on a timeline for congress passing build back better? rep. jayapal: we are working to do this as quickly as possible and hope it will pass this week and the house. in the senate, it is i hope that is how long it will take with the conversations we have had. there is nothing determinative there. i have not talked to the senate majority leader and do not know. my goal is to get them passed quickly in the senate. i talked to the senate majority leader of week ago and he told
2:28 am 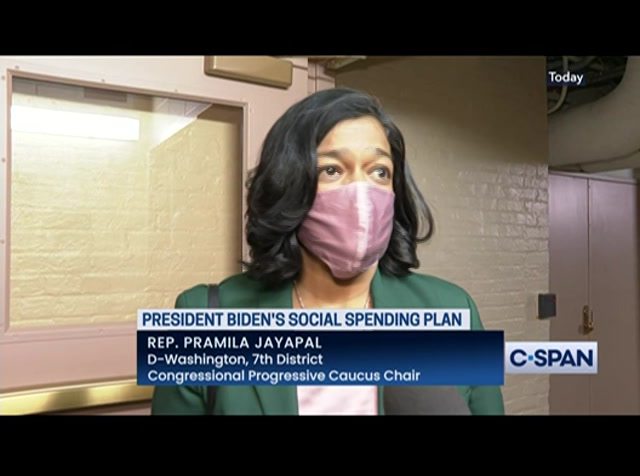 me this would be the first order of business as soon as we get it done, so i anticipate it will come up quickly and hopefully does not take two to three weeks to pass in the senate. >> you think it will be before thanksgiving. as i correct? rep. jayapal: i don't know but that is my hope. >> can you explain what has changed over the weekend? what has changed in your conversations that allows you the confidence now to vote this week on build back better despite not having those assurances from moderate senators? rep. jayapal: what we said for months is we want to vote both bills through at the same time in the house. that is what we will do. last thursday, there is not going to be a vote on build back better. it was just going to be a vote on infrastructure this week. we will have two votes this week on the build back better act and the infrastructure bill together. in addition, i had a productive conversation with sen. sinema and watched the white house. negotiating with both senators.
2:29 am 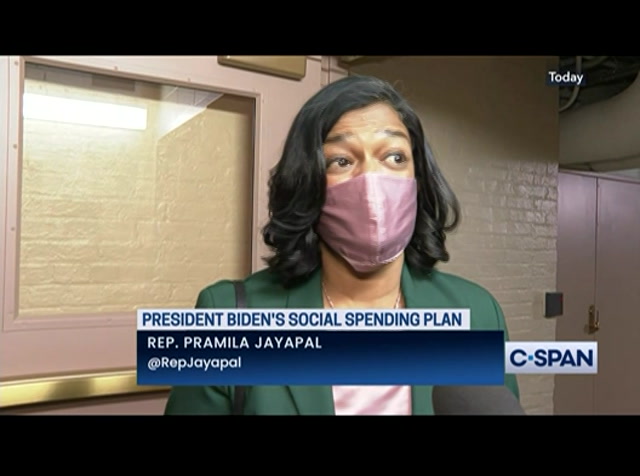 . they have been actively engaged in the discussion in crafting the bill before us. at this point, with the text and the votes, we are ready to say we trust you, mr. president. we said you could get 51 votes and we have enough of the other information that we are ready to go forward with that. >> you have concerns at all that there could be major changes to the legislation you are pass and a house on build back better during the vote-a-rama in the senate? rep. jayapal: i have made clear that is a concern and the white house assures me the president believes we have 51 votes for this bill. we will have to trust the president and i know he has been engaged in the negotiations with both senators. this is not something he came up with on his own or. talking to us. . this is something he actively negotiated and there were tremendous changes made to the bill that these two senators requested and i would hope that if we want to rebuild the trust
2:30 am 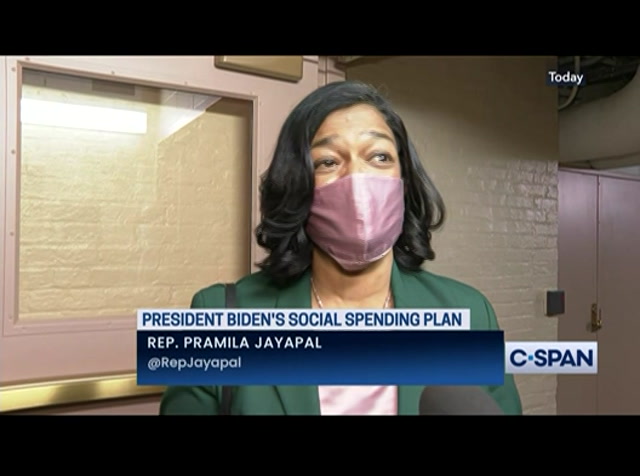 and really keep everybody together and deliver ultimately real change for people, investments in climate change-- right now, the president is in glascow making the argument that we will be at the forefront on climate change. that is in the build back better act. 550 $5 billion for taking on climate change that the president needs to deliver on. the biggest investment in housing ever in the history of our country so that we can house the on house across this country. the richest country in the world. universal pre-k and childcare. health care. immigration. these are the things that people will wake up and remember and when they go to the polling place, whether it is in the midterms or 40 years or three years for the president again, this is what they will remember. they will remember we delivered transformative change and what the smallest margins we have had in a long time. >> as we were listening to senator manchin, it sounded like
2:31 am 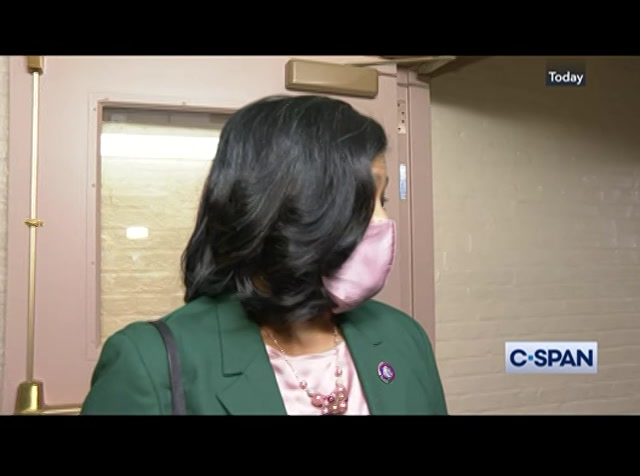 he wanted to see ppos. are you concerned moderate democrats might say in order to vote on the social spending package, they will need to see that? rep. jayapal: i have had conversations with josh gottheimer and others and believe everybody wants to move these bills forward. to get through the parliamentarian --i'm confident and looking because we have a lot of scores for different pieces of the legislation, so it is not like we don't know what these things cost, and it is not like we don't know what the taxes generate. we have cbo's for many parts of it and i believe that will be enough. >> is a bad faith what mansion -- manchin said yesterday? doesn't seem he is trying to slow down the process? rep. jayapal: i will not comment on what he said. i can't possibly do that and it is not worth it. i will focus on getting the two bills through, something we said
2:32 am 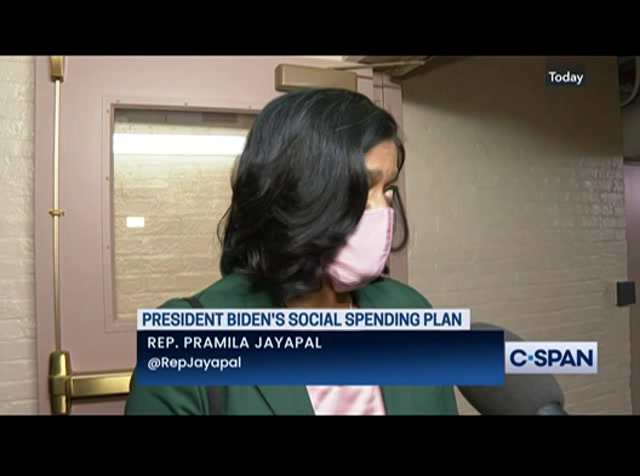 we wanted three months ago, and we mcclear twice already we will not vote for one without the other and leave anybody behind, and now i think we are in the place where we will not leave anybody behind and we will vote for both bills together. >> it sounds like if you can get this done, people will work -- forget about the chaotic process and focus on the bill. rep. jayapal: i know that for sure. once we deliver, nobody will over member, other than you guys, what this process was for three weeks. let's be clear this is three or four weeks that we actually had serious negotiations over the rest of the democratic party. 96% of the democratic party was onboard long before that but we have slim margins and had to get everybody on board so it is messy to watch negotiations from the outside, particularly on something as consequential as this, but i do not believe anybody will over member that's. they will remember i can go to work because i have childcare.
2:33 am 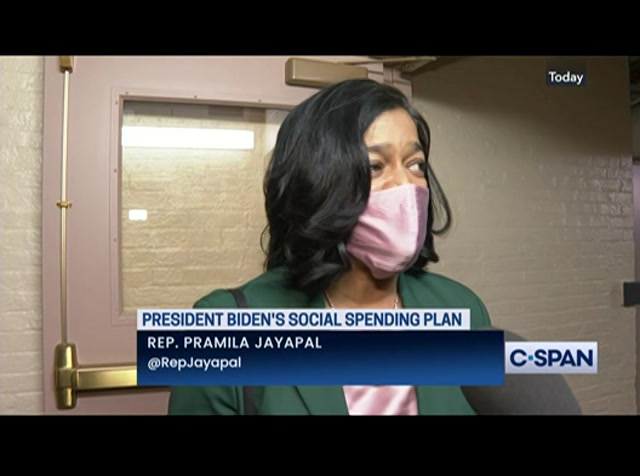 i have pre-k, which is the single biggest investment we can make in our kids to have opportunities down the road. people have housing. young people are going to remember there is a civilian climate court -- corps that will help young people energize -- take their energy and put it into fighting climate change. >> if you don't get it done -- rep. jayapal: we will get it done. >> you had 86, your entire progressive caucus, vote in favor of the infrastructure bill if the build back better bill gets to 18 or simple majority. rep. jayapal: at this point, that is my belief. the two have to be tied together and we have to have 218 or whatever the number is, depending on how many people are in the chamber. we have to have that number to pass the build back better act. i believe we will have tremendous unity on both of these bills at this point. >> can you walk us through the timing of these two bills? rep. jayapal: i do not know.
2:34 am 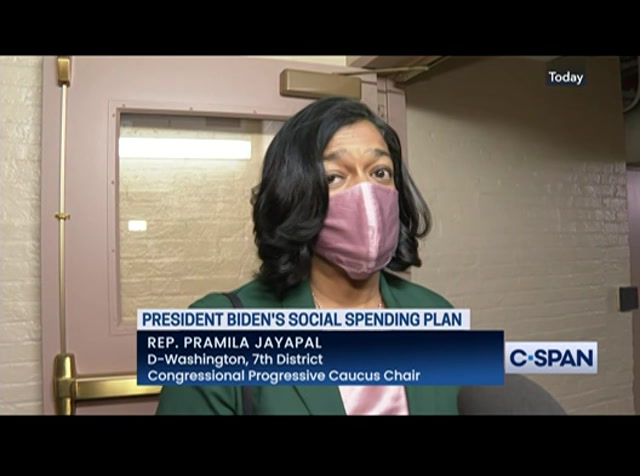 we are finalizing the final pieces of negotiation around. this is the senate working on this, the prescription drug pricing, with our chairman, and also finalizing immigration. that is something we are working through collectively, senate and house. there are some technical details around the limitation of childcare and the language within the text not matching the framework in terms of one of the benefits go out. we want to resolve that. for the most part, we are pretty close i think so hopefully we get that done this week. both bills and that it goes to the senate. >> have you heard any of these reports that democratic donors were considering withholding funding or donations ahead of the 2022 midterms over the fact that congress has not passed any infrastructure or build back better? is that a concern?
2:35 am 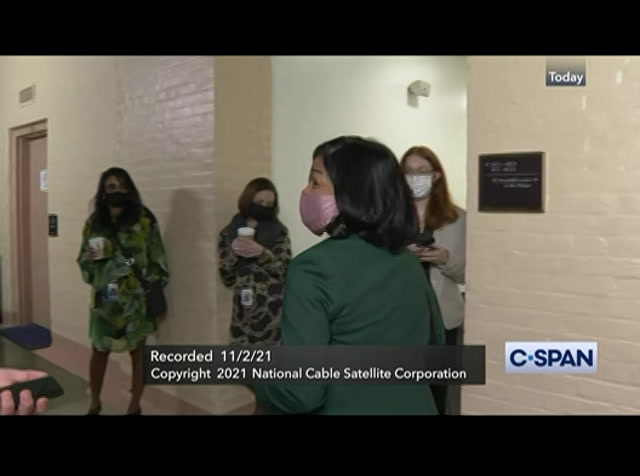 rep. jayapal: it is not a concern of mine. >> thank you. racy. >> earlier today house democratic leaders held a news conference on their legislative agenda. they talked about the infrastructure bill and president biden's spending plan . this is about 30minutes .
left
right
Borrow Program
tv