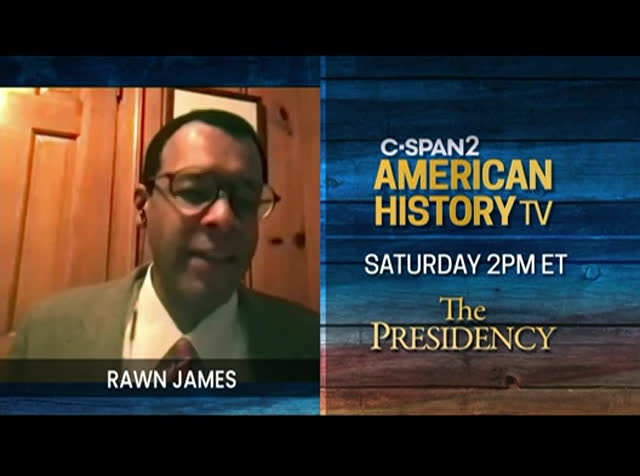 factors contributed to making a successful presidential term. at 2:00 p.m. eastern on the presidency, the former assistant district attorney general ron james discusses his book, law and the limits of royalty where he discusses whether president truman established the president, politicization of the supreme court. exploring the american story. i should american history tv saturday on c-span2. >> we have more live coverage today on c-span. at 1:00 p.m. eastern, u.s. cyber security director jen easterly and house homeland security committee ranking member john katko will discuss cyber threats and challenges. we will be back in military reporters and editors association conference at 2:00 p.m. and hear from richard clarke ahead of the u.s. special operations command and that is on c-span, online at c-span.org, or you can watch full coverage
12:49 pm 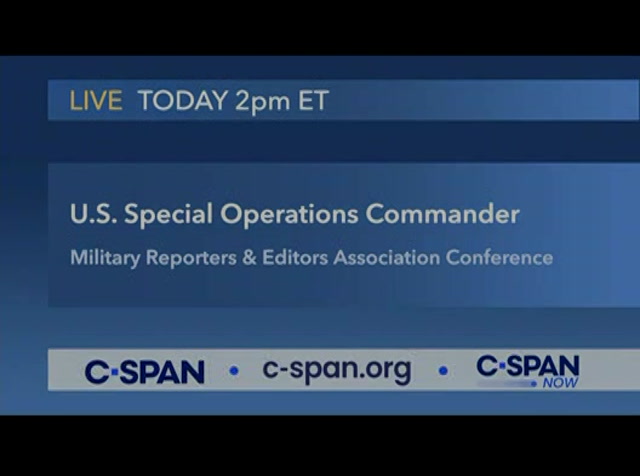 on c-span now, our new video app. is grover norquist, the president of americans for tax reform. welcome back to the program. guest: good to be with you. host: remind people about your organization and how are you financially backed? guest: americans for tax reform was set up at president reagan's request and our goal was to pass the tax reform act of 1986. when we did that, i came up with a taxpayer protection pledge because many in congress and many americans were concerned that if you made 1000 changes to the tax code in a room somewhere, there would be a tax increase. they call it tax reform, but there would be higher taxes. many politicians felt tax reform would give you tax increases. we wanted to make sure that did not happen. we have shared with people who run for the house, the senate, the presidency, and governors and legislators the simple plans they take and put in writing to
12:50 pm 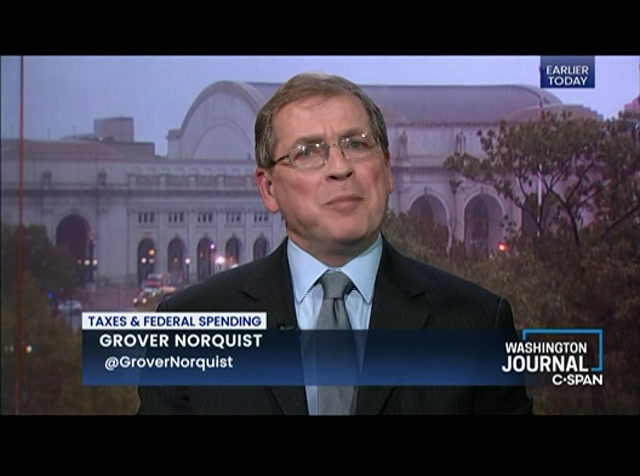 their voters, not to me, but to the voters of their state that they will oppose and vote against any tax increase. the vast majority of republicans in the house and senate, 16 governors and 1000 state legislators have made that commitment to their voters. if you ever talk to a legislator, just ask them, have you made that public commitment to the people of your state that you will reform government to cost less. not raise taxes to continue doing all of the failed things and refused to reform anything. it is a very interesting divide. i also run the wednesday meeting in d.c. where we bring 100 center-right activists and people who work for the hill to talk about what all of the modern free-market liberty movement are doing. people who care about homeschooling.
12:51 pm 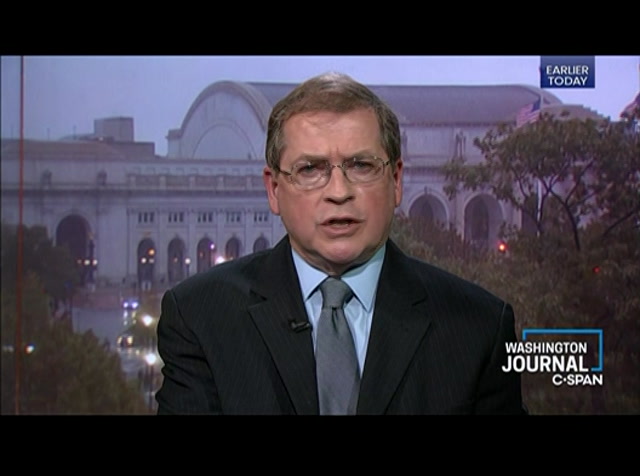 people who care about small businesses. people who care about religious liberty, lower taxes, the second amendment, the right to vague -- the right to vote. all the various things that people want to be left alone. now we have similar meetings in 45 state capitals and 20 overseas. we have a good network of people who sit around a table. everyone who is in favor of more limited government and more individual liberties for families and individuals work together and make sure that they are heading in the right direction. host: i imagine one of those discussions you have been having is the tax framework that is part of this build back better framework released yesterday. i want to work through some of the proposals yesterday with the most money being proposed coming in from changes at the irs. an expected $400 billion. what are those proposals and could you see that kind of dollar figure as far as revenue from those changes?
12:52 pm 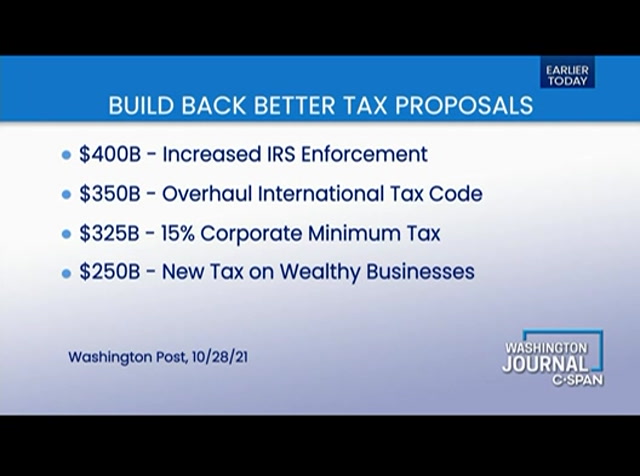 guest: they want the irs to have 87,000 more bureaucrats, enforcers to go around and look at your bank account and they want to spend $80 billion and higher 87,000. that is more people that serve on all of the aircraft carriers in the united states together. you could fill the coliseum three times with social distancing with that many irs agents. that is a lot of agents. the irs from 2017 until 2019 at 5000 slots open. they could not fill them. why? because the union has a rule that you can only hire first and inside the unionized bureaucracy. you cannot go outside and get talent so those jobs would not get filled. you will hear from some people. we did not have enough irs agents.
12:53 pm 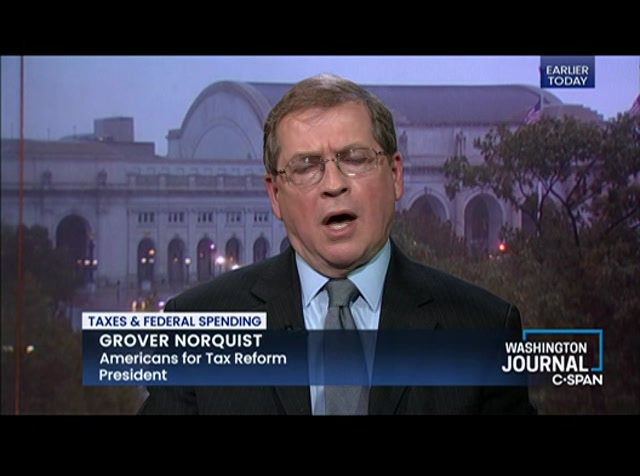 that is not the fault of not budgeting for it. that is the union rules that they have lived with at the irs. one of the reasons people are concerned about giving the irs more money and this other idea, which is not dead, it is over on the side. the president wants it, nancy pelosi wants it. the only people who do not want it are 70% of democrats and 70% of americans who say it is a mistake to let the irs look through your bank account, no warrant, just access to all of those -- to your personal data. that is not something people are willing to put up with. host: the idea of hiring those people is to go after those who frequently or previously not paid the taxes they should as a fundamental effort? do you think that is a bad idea or good idea? guest: you get different arguments. biden likes to say it is
12:54 pm 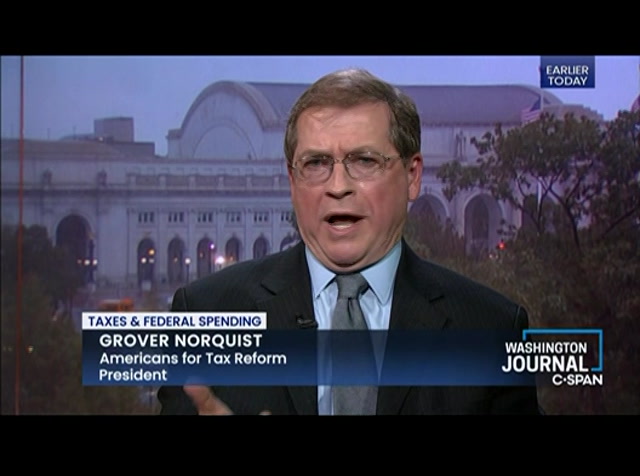 billionaires and big corporations. but the irs put out a press release says they intend to increase audits of small businesses 50%. they do not independent contractors. they do not like self-employed people. those are their targets. they made that very clear by what they are going after. billionaires pay their taxes because they have lawyers that make sure they do just as the law says and major corporations are audited regularly. what they are looking at going after our smaller businesses, nail salons, barbershops, local grocery stores. those are their target audiences. here is the challenge. we have seen the irs already abuse that. you put $10,000 in cash because of a cash business, nail salon, barbershop would take it to the bank and you have to report it. if you put $9,000 and day take
12:55 pm 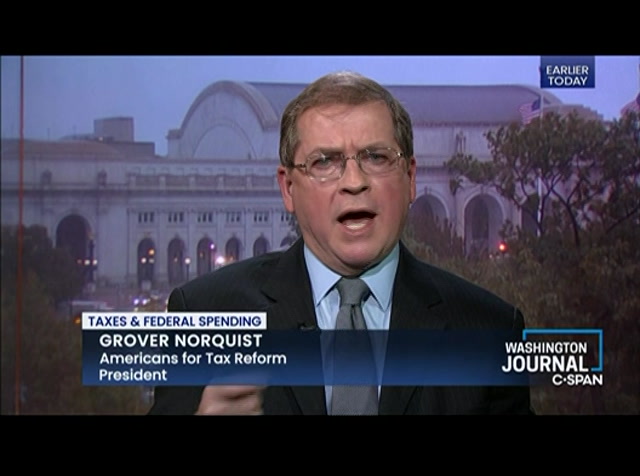 your money just because they think you are hiding the $1000. there are real horror stories of people having their life savings taken by the irs in an audit. the average irs audit of a small business is a little more than 27 months. the irs says, hi, small businessman. we think you have $2000. you can either give us the $2000 or hire a lawyer. which will it be? that is the level of problem that we have with the irs. 65% of voters believe that the irs already has too much power. it is one of the reasons people don't like it. it is their own internal labor union rules which have said they are not hiring people. the irs has been hiring back people who were thrown out because they were looking at people's private data. they had no legal right to. they got hired back. so the irs does not punish
12:56 pm 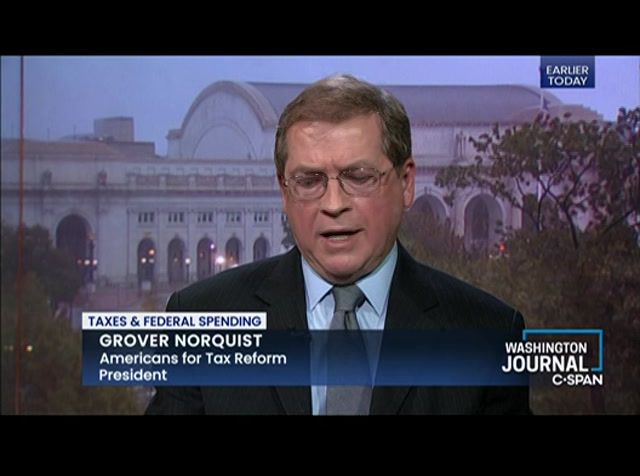 people who do that. they tell them it is ok, you can come back. we also have a problem because the treasury department, 80% of which is irs agents, the money that they contribute to candidates, 97% goes to democrats. so you have a politicized union for the irs agents. 97% democrat. a few high your 80,000 more irs agents and they pay dues, that recycles straight back into the democratic party. host: there was a recent analysis on the market watch website by the center for american progress. he talks about the audit capability. he says the biden proposal is designed to improve the ability to select who the audit so that it does more audits of tax cheats and fewer unnecessary audits of regular people who pay what they owe. for the average american, the only practical effect of this proposal is to reduce likelihood
12:57 pm 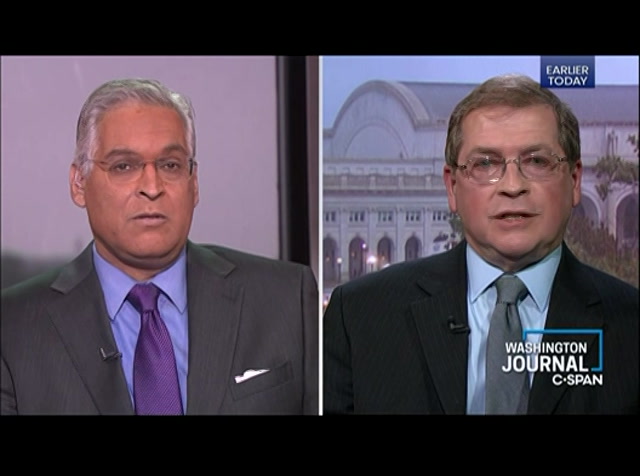 of getting audited. how would you respond? guest: they are a very good left-wing group. many people have been hired straight out of it. they are a wing of the modern democratic party. those are the talking points of the people who want the irs to have more power and more control. give us power, we will be responsible. host: what is wrong with the argument he makes? guest: i will give you a couple examples. what the irs is doing right now, you give them more money. what will he do with it? they are required by law to do a study of the complexity of the irs code every year. they have not done it and 20 years. 20 years, they have made no effort to do that and that is a legal responsibility for the irs. one of the studies that the inspector generals had found that 42% of their printers were not working. why? they had not undone the trash or change the ink. this is not an operation that is taking things seriously and 42% of the printers do not work
12:58 pm 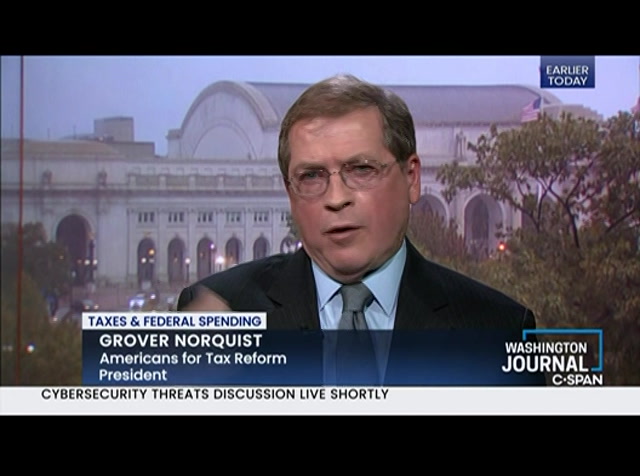 because they do not know how to take the old printer ink out and put in new ink or they just let it pile up so it jams everything. the irs was caught -- they have cases against people, personal data and they say we will investigate you. they were storing that data on on the break rooms where people have lunch. not where it was secure. the kind of thing that we get any policemen thrown in prison and fired if they behave that way with evidence in a criminal case. the irs -- the criminal code has more cars than agents. host: let me pause you only to invite people. (202) 748-8001 republicans. (202) 748-8000 democrats. you can text your questions or comments for americans for tax reform at (202) 748-8003.
12:59 pm 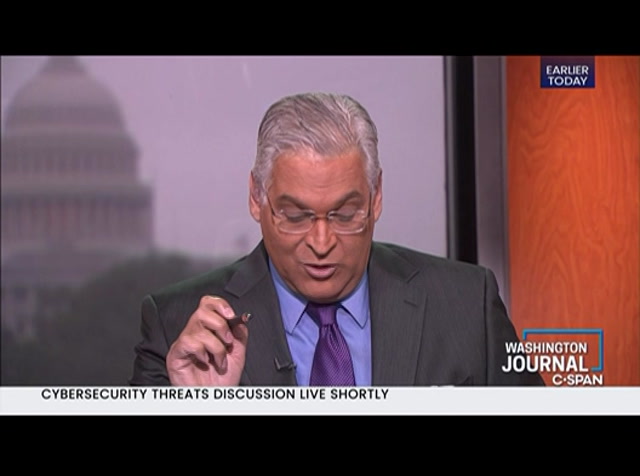 this 15% corporate minimum tax. who does that impact the most? guest: corporate taxes are important because they are a way of hiding. corporations spend 70% of their money on salaries. the best studies say that about 70% of the corporate income tax is paid by workers in lower pay. there are some left-wing groups that think it is only 25%, but it is not 0%. about 70%, what with the company have done with it? they would have paid payroll. that is what they are not doing now. sometimes they are able to raise prices if there is not a lot of competition. and so you have inflation, higher prices, and consumers pay the higher corporate income tax. in more cases, it depresses wages.
1:00 pm 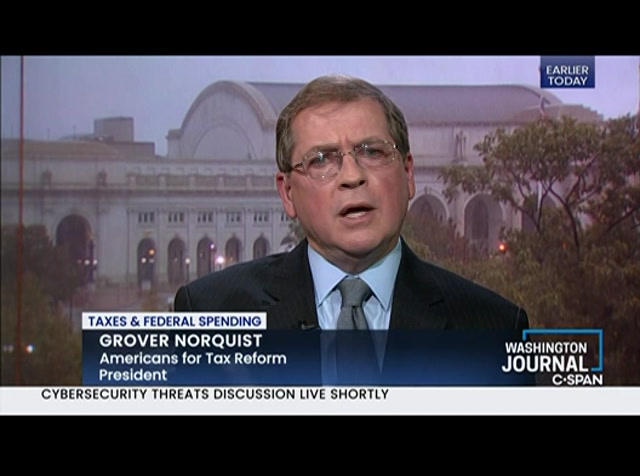 we saw this when the republicans cut taxes in 2017. in 2019, we used to have the highest corporate rate in the world at 35%. higher than france, higher than communist china. higher than the european average. we were at 35%. we took it down to 21%. what happened? you have strong economic growth. you had on employment go down to 3.5%, the lowest in 50 years. they were hiring people, they were paying people more. the median income for a family of four, not the average. bill gates making a billion dollars does not move the median. the median got a 4400 dollar increase in compensation that year alone. 6.8% increase. that is what happens when you cut the corporate rate. unfortunately biden wants to reverse engineer the progress of 2018 and 2019 before covid and
left
right
Borrow Program
tv