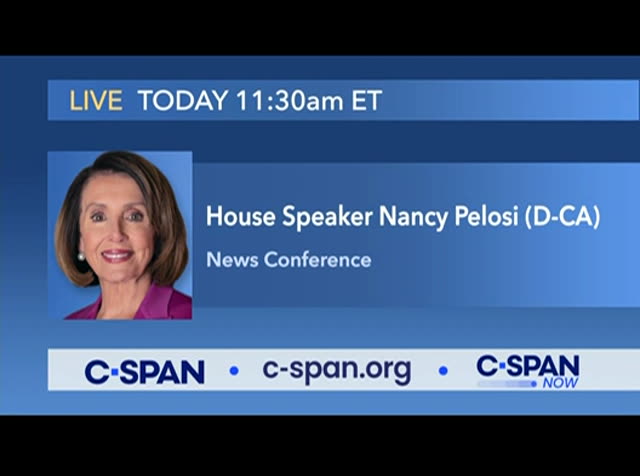 here's a look at our live coverage today here on c-span. coming up at 11:30 eastern, house speaker nancy pelosi holds her weekly news conference on the democrat legislative agenda, including the house vote to increase the debt ceiling. at 7: -- at later at 3:00, the u.s. house returns to debate on the debt ceiling bill. listen live on c-span, c-span.org, or with the c-span now app. host: the senior political columnist is back with the national journal. his against the grain column. it was last weekend against the grain where you dug
11:18 am 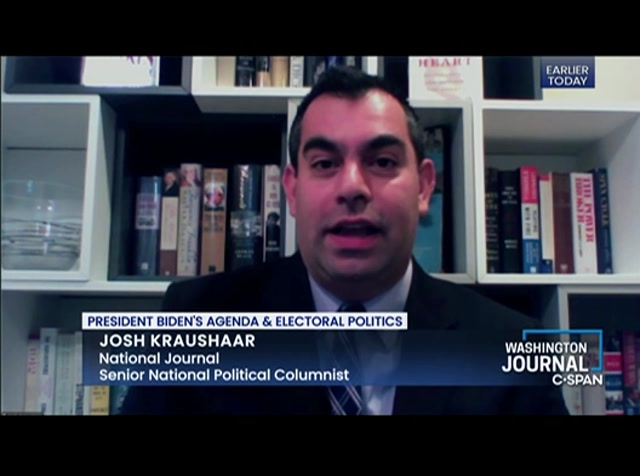 just how worried should democrats be about the numbers right now? be very worried. his average job approval according to the 538 polling average is 44%. that is lower than every president at this point in their administration in the last 50 years other than donald trump. it is a double whammy. the president is losing support amongst independents. his average support among independents is in the 30's and most of these polls. you also have an intensity of opposition among republicans and even independents, a deep disapproval from a sizable plurality of voters. you have on top of it a lot of evidence that democrats are disillusioned as well. covid is not going away, or it is taking a while to go away, the economy is facing a lot of headwinds. this white house a couple of months ago thought that they would be running and politicking on a roaring back economy and
11:19 am 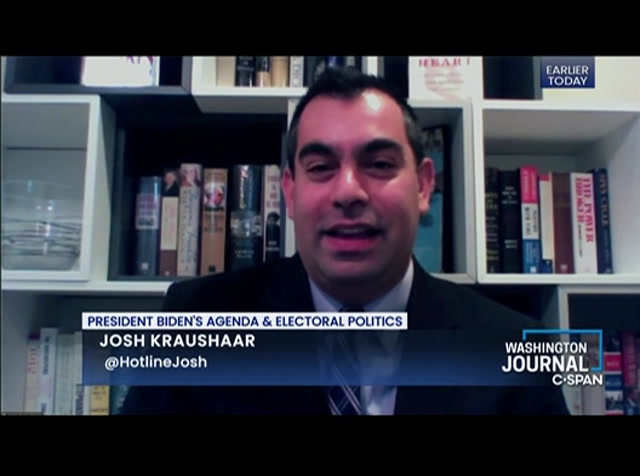 covid going away. you are seeing the opposite. inflation is a real issue. not only inflation, but some of the after effects of covid will stock shortages in supplies. stores cutting hours. stores cutting customer surveys. i've talked with some democrats who are starting to use the term malaise in describing the public mood. that is not a good sign. it was attached to jimmy carter's presidency and not one the biden white house wants to repeat. host: the chart of president biden's job approval numbers from january and february through the latest numbers. you can see the trend line going down and underwater starting the end of august, early september. historically, this is not the usual end of the honeymoon phase of a new president. this is something different?
11:20 am 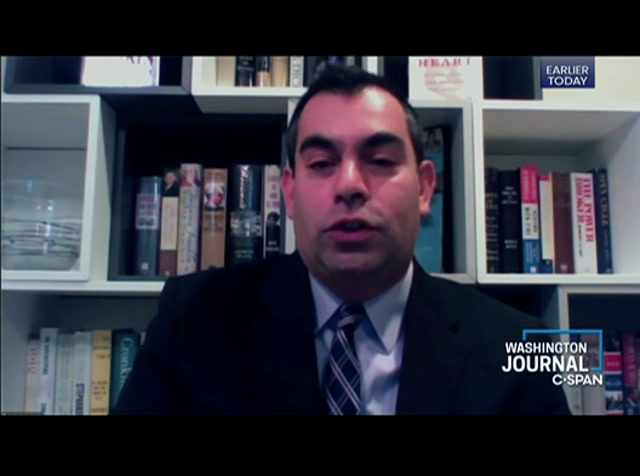 guest: polls go up and down and there are certainly -- midterms are over a year away there's plenty of time for the presidency to rebound. one of the more concerning elements of the polling is that unlike president trump and president obama, who could rely on a rock solid base, 80% or 90% of democrats and republicans during the obama and trump residencies saying that they would support them no matter what. you're not seeing the same degree of support with president biden. he is taking off the left because he is not permissive enough on immigration policies, he hasn't given into the left on everything, he has ticked off the middle because he is trying to pursue trillions of dollars in a spending package and the covid and economy. this is a double whammy. at least with trump and obama they could say we have a base that will show up to the polls no matter what for our parties
11:21 am 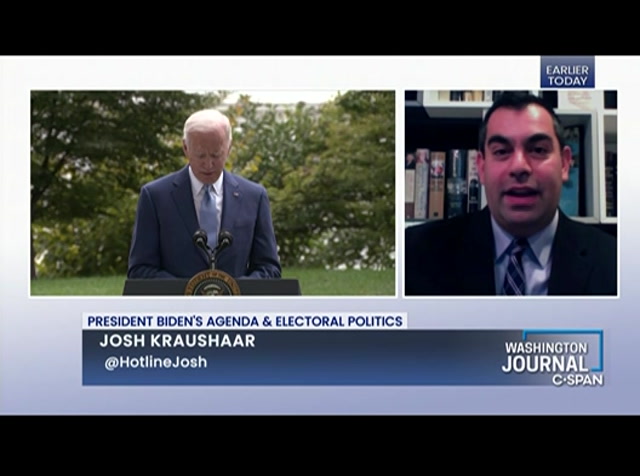 even though we have a lot of headwinds. biden does not command the same degree of support from his own party, which makes it extra challenging for him. host: midterms are year away, but the off-year elections, specifically the now close race in virginia is weeks away. how does this play out if terry mcauliffe, the democratic former governor of virginia, if he loses in virginia, a state that president biden won less than a year ago by 10 percentage points over donald trump? guest: that virginia governor's race, which takes place next month, will be a strong bellwether about what the public mood is looking like. democrats thought that this was going to be a walk in the park. that you had a state that voted for president biden by 10 points. it has been trending blue, democrats have won every governors race going back to
11:22 am 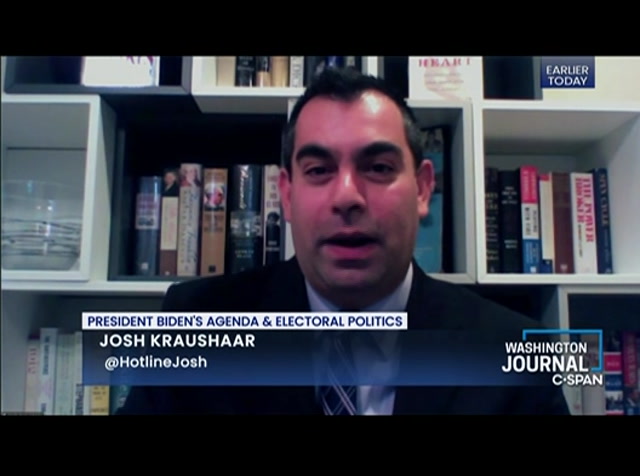 2013 and presidential elections to 2008. i think they underestimated the fundamentals, that usually virginia the year after a presidential election, there is a desire to check the party in power. the virginia governor, biden in the white house, you have a democratic state legislator the last few years, so there is a strong desire to check the party in power. you add on top of that the degree of support biden has in the state. he won well over 50% of the vote last year. his job approval in virginia is in the 40's, underwater. i assume the president will come in for terry mcauliffe.that usually happens in the closing days of a governors race, but i'm not sure if you will give terry mcauliffe that much help. terry mcauliffe himself said that biden may actually give him negative in the state. you need to get democratic votes
11:23 am 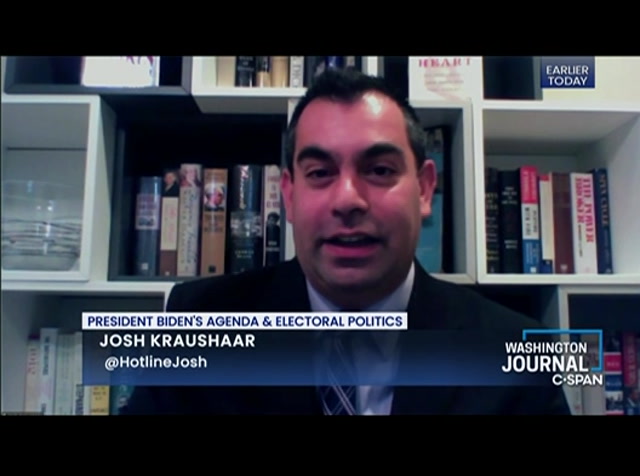 to the polls. that is a warning sign. you're looking to get enthusiasm up at a time when in past elections that was not a challenge. democrats were flocking to the polls in virginia during the trump era. it is harder to have democrats showing up for terry mcauliffe in an off-year election. host: if you are to do that, it would be a busy time for him as congress continues to debate in the democratic party in particular continues to debate the build back better agenda, what the final number should be. what is your gut telling you about how longer this will take? does biden get the budget reconciliation bill through the house and senate? guest: usually the notion in washington is something that important is too big to fail. i'm afraid the trillions of dollars in proposed spending that the white house and democratic party are trying to pass may be too big to pass. you have a 50-50 senate.
11:24 am 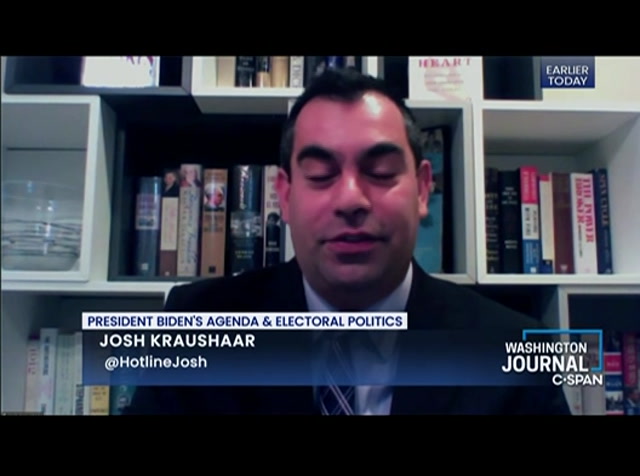 you cannot afford to lose a single democrat. you have two democrats in joe manchin and kyrsten sinema who are functionally independent. these are not partyline voters. their constituencies are to the middle and to the right. these will not be easy votes to get even with the typical horsetrading that goes on. you look at the house, and pelosi and biden can only afford to lose three house democrats, and you already have a couple on the record who are very wary about the spending levels that democrats are proposing. there are dozens more democrats who say they want to pass something but they know that they are in competitive districts where the political tide is turning against them and are very wary about inflation, government spending, and when they hear that democrats want to pass $3.5 trillion in additional spending on top of covid relief, on top of the bipartisan proposal for infrastructure that costs over $1 trillion.
11:25 am 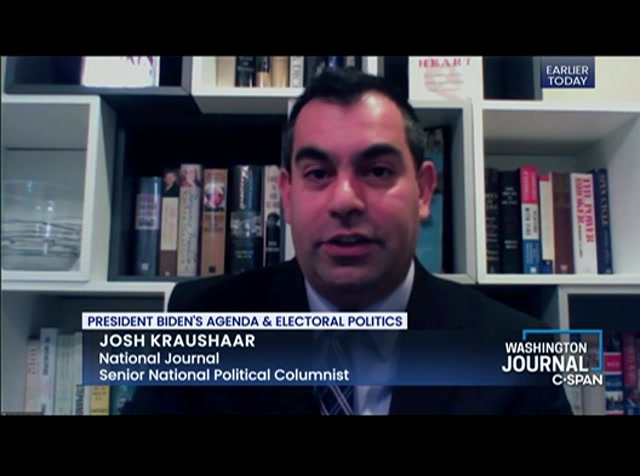 i don't think this will be an easy lift. i don't think there's anything better than a 50-50 chance that democrats get this through even though the incentives suggest they need to get something done to help president biden because his job approval is thinking to the degree that it is. it's hard to get everyone in line for a consensus proposal. host: chatting politics with one of the smartest minds in politics in washington, longtime political reporter josh kraushaar of the national journal. he writes the against the grain column and has a podcast of the same name.here take your questions. as usual, by political party. kraushaar, as usual, plenty of calls for you. republican, you are up first. caller: biden, he is just not
11:26 am 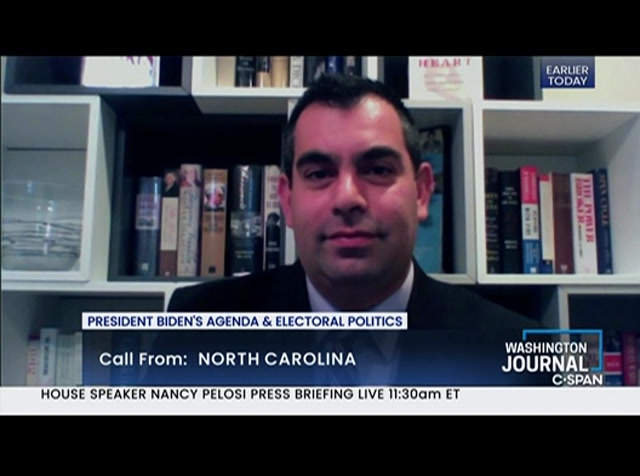 making decisions for running this country. he is just a puppet and everybody knows it. look at the extreme policies he is having. we are going to defund the money to build the wall down there, we are going to put environmental stuff -- environmental stuff is not going to stop these illegals from coming around. i the institute for immigration studies, it costs american taxpayers last year a half $1 trillion on illegal immigration. as far as the news media goes, the news media needs to cover -- all they are talking about is the january 6 commission. you don't hear anything about biden's son's laptop and art deals. it is not a 50-50 thing, it is more like a 90-10 against conservatives, republicans, and especially donald trump.
11:27 am 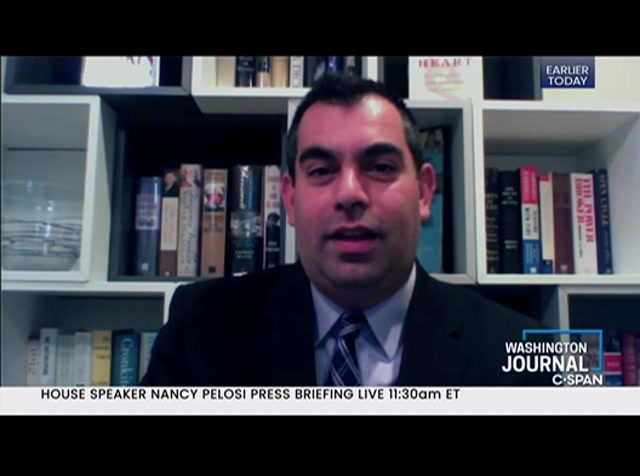 that is my opinion. host: josh kraushaar. guest: the caller brings up the trump factor in the midterms and in the elections win trump himself is not on the ballot. one of the worrying signals out of virginia is that mcauliffe has much of his campaign in connecting glenn juncker and president trump. the numbers don't suggest it will be similar to the 2020
11:28 am 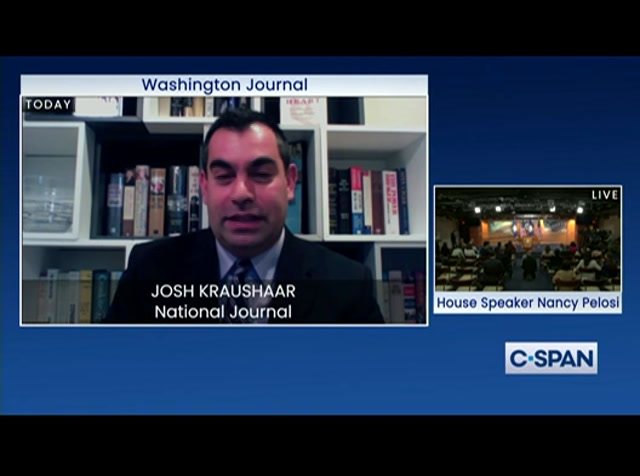 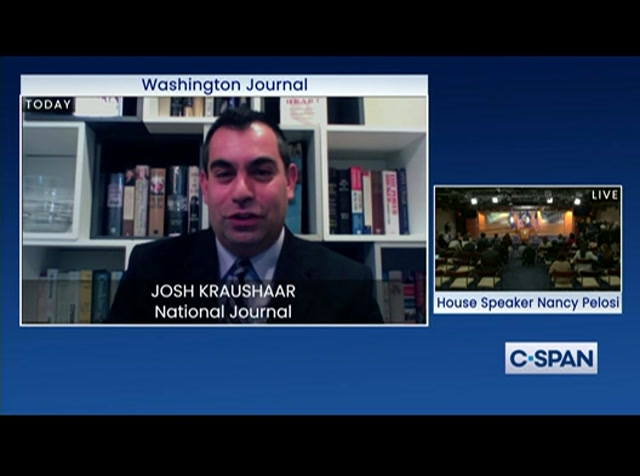 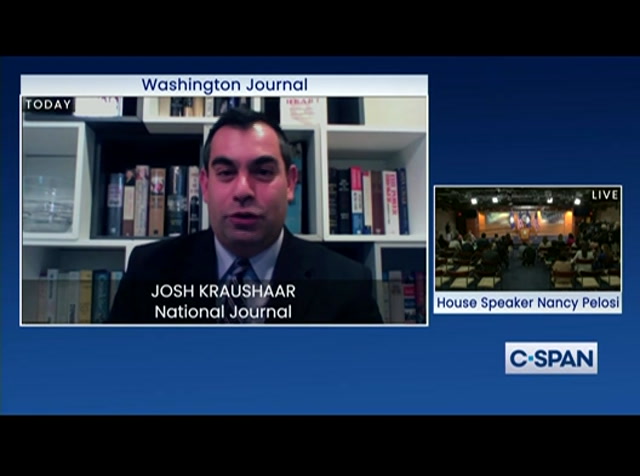 be a good year for republicans where it may be easier to win the blue-leaning states. there is a good chance that the path to the senate for republicans will go to new hampshire and nevada and virginia for the governors race. the chances in the red states like georgia and arizona would still be lower because of the candidates. host: it feels like we hear wave election all the time. when is the last time we did not have a wave election? guest: that is a great point. politics all the way back to 2004, the first election i cover for the midterms, almost every
11:31 am 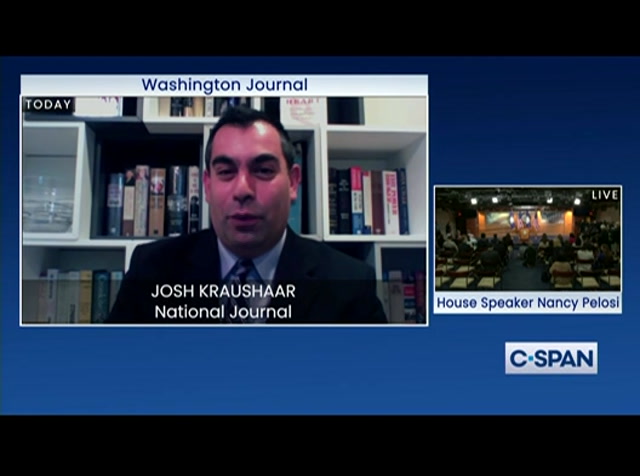 election since the bush years has been a wave because people have said that they are dissatisfied with the direction of the country. all the way back to 2004, the iraq war, hurricane katrina, distrust in government and you hear the same discontent almost 15 or 20 years later. the public is dissatisfied with both parties, dissatisfied with leadership on both sides so they basically say we will throw you out if you do not do the job well and that has been the case for the last 18 years. host: this is edward in new jersey. independent. good morning. caller: i was wondering if we are getting an accurate picture of the youth demographic. i cannot see that the gop can pivot themselves away from --
left
right
Borrow Program
tv