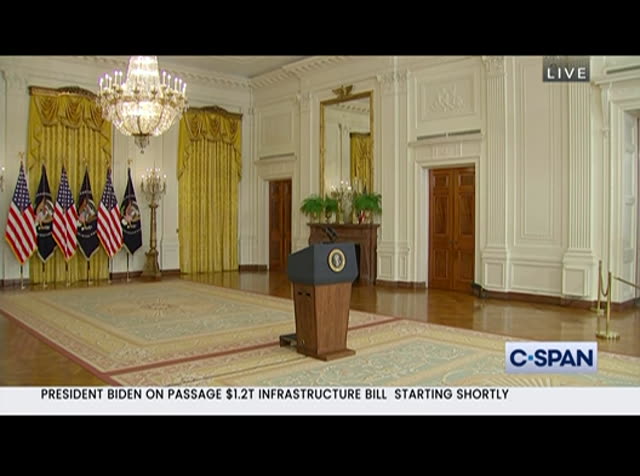 >> earlier today the senate passed of the 1.2 trillion dollar industry tractor -- infrastructure bill. the president will be making comments on it shortly with the vice president and we will have those remarks live when they get underway here at the white house. earlier we mentioned that the new york governor, andrew cuomo, resigned after april work from the attorney general in that state alleging sexual harassment . here's a look at the statement earlier today from andrew cuomo. >> i have always started by
3:01 pm 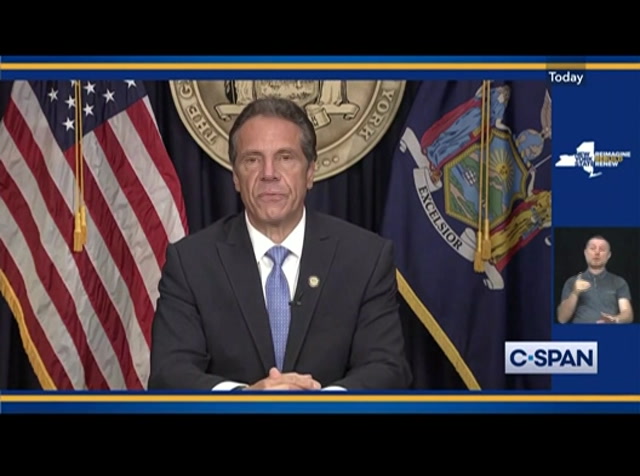 telling new yorkers the facts for my opinion. let's start new york tough with the troop. -- truth. the attorney general has a report of complaints made against me by certain women of my conduct. it says i sexually harassed 11 women. that was the headline people heard and saw. the reaction was outrage. it should have been. however, it was also false. my lawyers, as you just heard, have reviewed the report over the last several days and have already raised serious issues and flaws that should concern all new yorkers. because when there is a bias or a lack of fairness in the justice system, it is a concern for everyone. not just of those immediately affected. the most serious allegations made against him he had no
3:02 pm 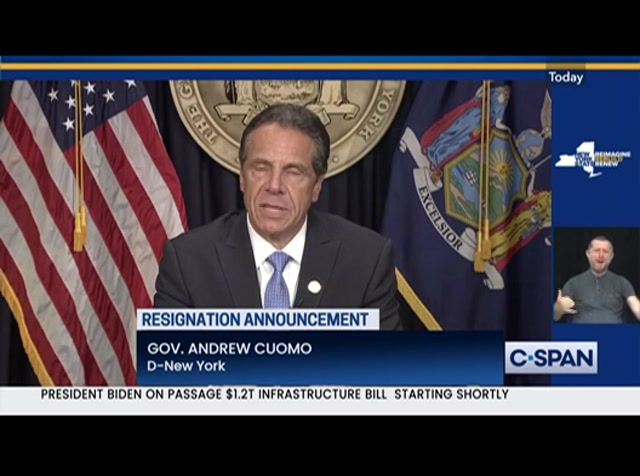 credible factual basis in the report. and there is a difference between alleged improper conduct and concluding sexual harassment. now don't get me wrong, this is not to say that there are not 11 women who i truly offended. there are. and for that i deeply, deeply apologize. i thought a hug and putting my arm around a staff person taking a picture was friendly. she found it to be too forward. i kissed a woman on the cheek at a wedding and i thought i was being nice, but she felt it was too aggressive. i have slipped and called people honey, sweetheart, darling. i meant it to be endearing. but women found it dated and offensive.
3:03 pm 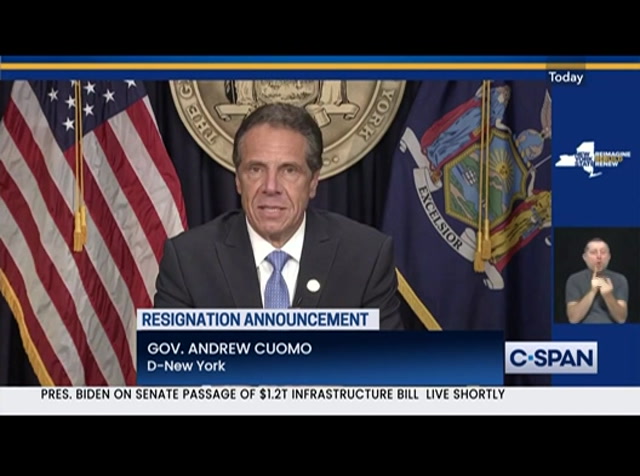 i said on national television to a doctor wearing ppe and giving me a covid nasal swab, you make that down look good -- gown look good. i was joking. otherwise i wouldn't have set it on national television. she found it this respect. i take full responsibility for my actions. i have been too familiar with people. my sense of humor can be insensitive and off thing. i do hug and kiss people casually. women and men. . i have done it all my life. it is who i have been since i can remember. in my mind, i have never crossed the line with anyone. but, i didn't realize the extent
3:04 pm 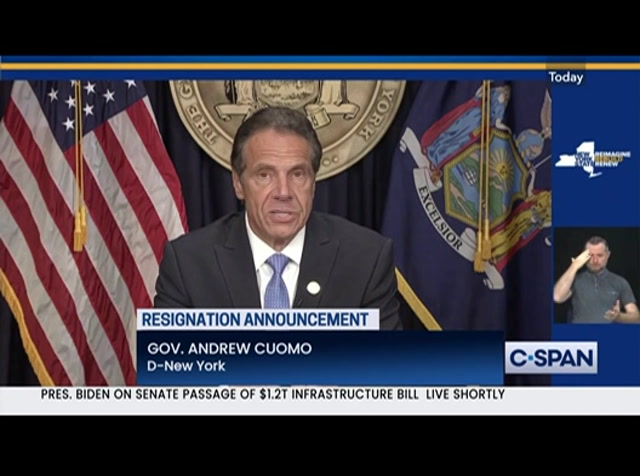 to which the line has been redrawn. there are generational and cultural shifts that i just didn't fully appreciate. and i should have. no excuses. the report did bring to light a matter that i was not aware of and that i would like to address. a female trooper related a concern that she found disturbing and so do i. please let me provide some context. the governors trooper detail had about 65 troopers on it. of the 65, only six women and nine black troopers. i'm very proud of the diversity of my administration. it's more diverse than any administration in history and i'm out of the fact that i have more women in senior positions
3:05 pm 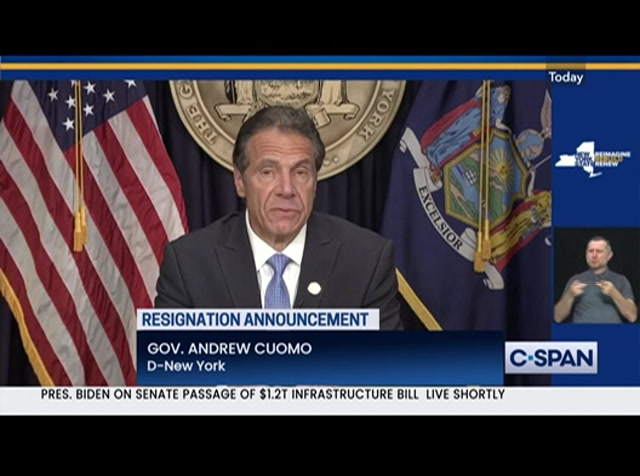 than any governor before me. the lack of diversity on the state police detail was an ongoing disappointment for me. in many ways, the governors detail is the face of state government that people see. when i attend an event, people see the details with me. i was continuously trying to recruit more to diversify. on one occasion, i met two email troopers on duty at an event. both seemed competent and impressive and i asked state police if they were interested in joining. i often meet people, men and women, and if they show promise, i refer them to be interviewed. the state police handled the interviewing and the hiring. one of the two troopers eventually joined the detail.
3:06 pm 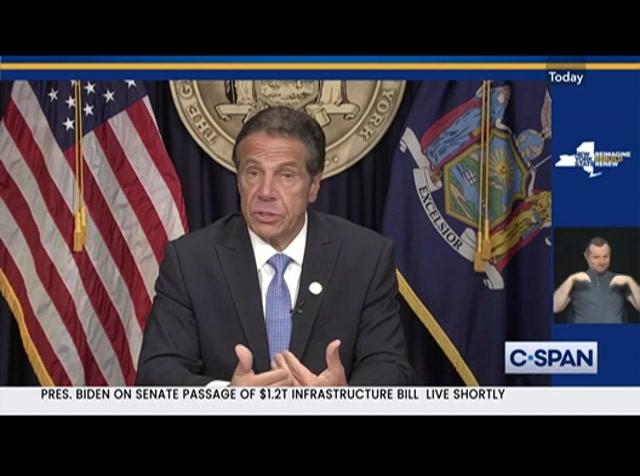 i got to know her over time and she is a great professional. i would sometimes answer with her in the car. we spent a lot of time driving around the state. this female trooper was getting married. >> watch all of this online at c-span.org. we take you now live to the white house with the vice president and president. guest: our -- v.p. harris: our administration will work on behalf of the american people and this has been true as we delivered historic relief through the american rescue plan to families with small businesses. as we continue the fight to press -- passed legislation to strengthen the sacred right to vote. and as we continue the work to strengthen our nation's care economy. and this is true today. because today we move one step
left
right
Borrow Program
tv

New York Governor Andrew Cuomo (D) held a news conference to announce his resignation over sexual harassment allegations. "The best way I can help now is if I step aside and let government get back to governing," said Gov. Cuomo. At the start, he addressed the New York attorney general's report saying the most serious allegations had "no credible factual basis." He then apologized to the women he offended and thanked them for coming forward. Governor Cuomo's resignation will be effective in 14 days.