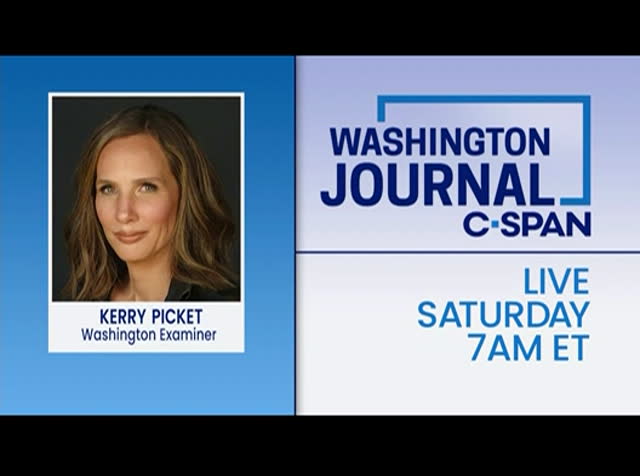 and "washington examiner" talks about campaign 2020 and 202. and freelance writer and her recent article looking at gerry meandering. watch "washington journal" live saturday morning and join the discussion with your phone calls, texts and tweets. the house is in recess waiting for the rules committee to finish work on legislation to extend the current residential eviction moratorium, a federal ban is set to expire on saturday. when the house returns, we will have live coverage, here on c-span. a discussion on infrastructure investment in the developing world. panelists talk about the challenges and opportunities of
5:59 pm 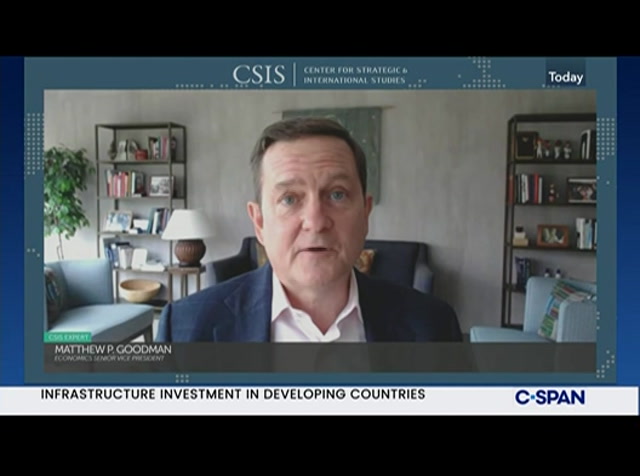 global infrastructure development projects and discuss the g-7 global infrastructure initiative known as the build back better world. the center for strategic and international studies hosts this hour-long event. >> good day matthew: good day, every. i'm matthew goodman. i'm delighted to welcome you to this special event on build back better world. delighted to have you all with us, on behalf of my co-worker, john hillman, and myself, we're delight to have had you here with us. this is going to be a very special hour. i've been at csis almost 10 years and i think this may be i can't think of a more high powered panel that we've had or
6:00 pm 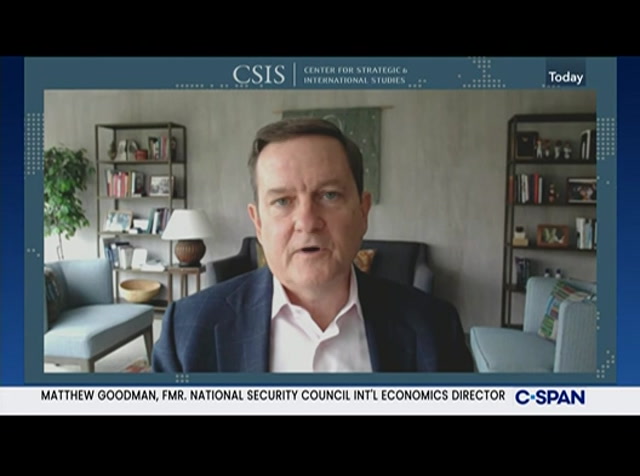 i've had the chance to moderate. i'm looking forward to this, i think you'll enjoy it as well. i'm going to introduce the panel in just a second but let me set the scene by saying, this is actually infrastructure week, at least at csis. there's obviously, we all know there's been some -- i don't want to jinx it but some, hopefully some progress on capitol hill on a domestic infrastructure plan, $1 trillion of spending on infrastructure, we've also been here at csis doing some work on trilateral cooperation between japan, the united states and china, trying to move forward an initiative of their own and the g-7, the group of seven advanced market democracies, as i think people know, back in june when they met in britain, agreed on something called build back better world, which was their name for a
6:01 pm 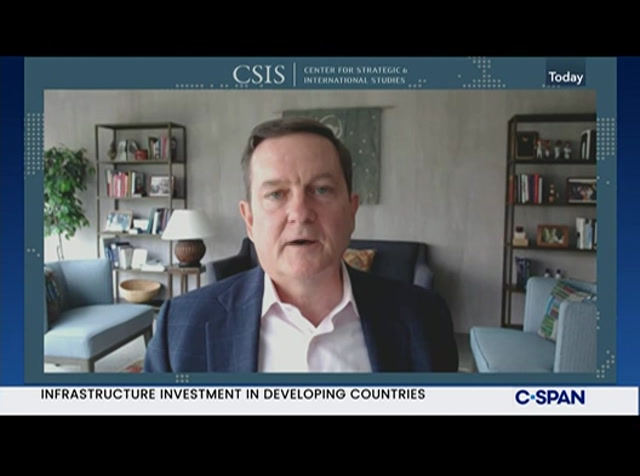 global infrastructure program which they are going to do together, work on together. and they described it in their -- or the white house fact sheet describes the build back better world initiative as a, quote, values driven high standard partnership led by major democracies to help narrow the $40 trillion-plus infrastructure need in the developing world. and they said they're going to focus in four arias, climate, health and health security, digital technology and gender equity and equality. the initiative is still not very well defined but we have enough sort of information about what the sort of motivating factors are and the broad areas are. i think more broadly we're looking at the u.s. competitive position in the world, commercially, economically, and
6:02 pm 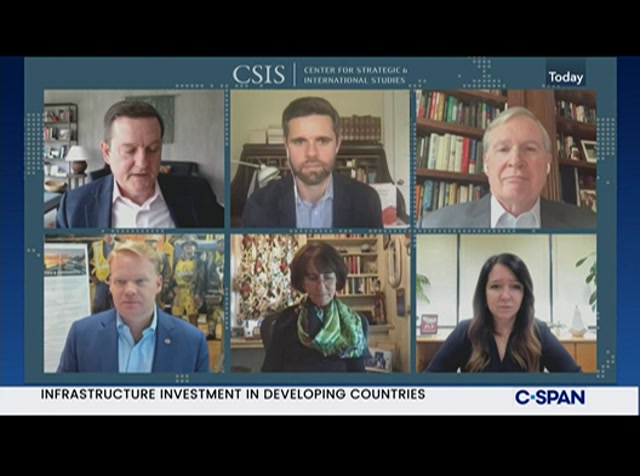 from a kind of international relations and foreign policy perspective. so this has been an important part of that story as well. so we have, as i say, an absolutely terrific group of, they're more than experts, they're senior thought leaders on issues around this subject matter today. and i'm going to invite them to join us now and they are in alphabetical order, ambassador charlene barshefsky, chair of parkside global advise, former u.s. trade representative in the clinton administration. nice to have charlene back. brendan bechtel, chairman and c.e.o. of the bechtel group, delighted to have brendan with us as well. marcy frost, c.e.o. of call burn's, the california public employees retirement system, one of the biggest public pension
6:03 pm investors certainly in the united states and i think it is the biggest, and maybe in the world. so delighted to have marcy with us from sacramento. and finally, not -- last but not least, definitely, stephen hadley, principal at wright hadley gates emanuel. together, steve and charlene co-chaired a task force john and i led a couple of years ago on global infrastructure and designing a u.s. global infrastructure strategy and we're just delighted to have them back with us to talk about that and sort of where we are today. so, i think with that, we're going to do sort of tag team q&a now. down the line as it were. i'm going to start with brendan, actually. brendan, you are everywhere in the world. your company. so i'm sort of interested in particular on linking the domestic and international story. we're a think tank focused
6:04 pm 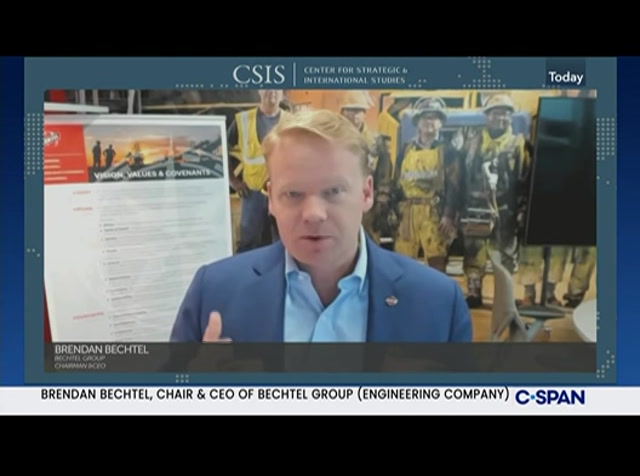 internationally but the domestic infrastructure story is important in and of itself. the question is how does it link in your mind to the international story? why is it important and how do you think about it in the global context? brendan: yeah, thanks, matt. first, let's remind ourselves why it matters if u.s. companies are competitive in this arena. it really comes back to u.s. leadership. so billions of people around the world, particularly in developing countries, are lacking basic infrastructure from access to clean energy and water to health career is voicer digital connectivity. so the real question is how and through whom are those needs going to be met? and the answer to that will have profound implications for critical u.s. interests. from a foreign policy and national interest perspective as well. it will affect if we can avoid the worst impacts of climate change, whether inequality gaps get smaller or bigger around the
6:05 pm 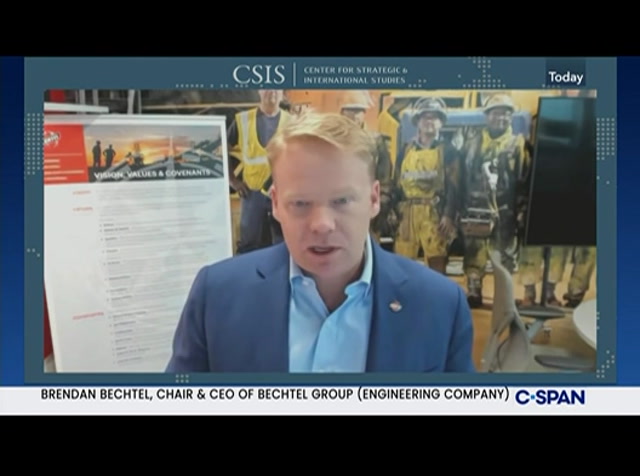 world, and whether more countries become more free and open, for example, as a result of access to digital infrastructure. i would say think a little bit too about, when american companies are engaged abroad they're a force for good and a catalyst for positive change. that's been my experience living and working on the ground around the world. american companies do this kind of work abroad. they promote transparency, responsible construction, environmental labor standards. we hire and train locally, we build local capacity and capability and we advance american values. so as a result, you can imagine there are many governments where real -- who are really eager to work with team u.s.a. but we have to be competitive. there are options out there for these companies. we can get there in part by creating a large, vibrant infrastructure market here domestically in the united states which hopefully is happening right now up on the hill, which is really exciting. this is going to give u.s. companies a whole market and more opportunities where we can prove that we're innovative, we
6:06 pm 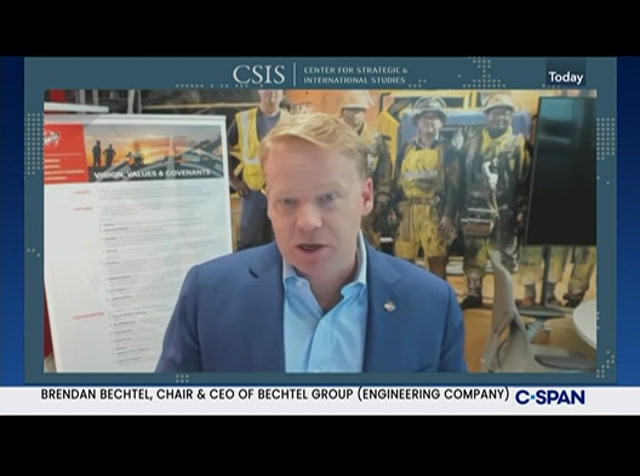 provide cutting edge solutions and we deliver world class infrastructure that's really the envy of the rest of the world. all of this hone ours capability, creates credibility and confidence in american companies, we can bring potential customers here and show them what's actually been done and built. a perfect example or counterexample is china. the chinese have used their captive home market very effectively to expand rapidly and build up their skills and infrastructure and then they went out and tried to dominate the world's markets. think for a minute about the fact that bechtel is regularly one of the top 10 global contractors measured by revenue up until recent years. there are today no u.s. companies in the top 10 contractors globally and seven of the top 10 firms are chinese state-owned enterprises. so right now the world sees the u.s. and see us falling further behind when it comes to infrastructure. if we can't do large scale infrastructure at home how do we
6:07 pm 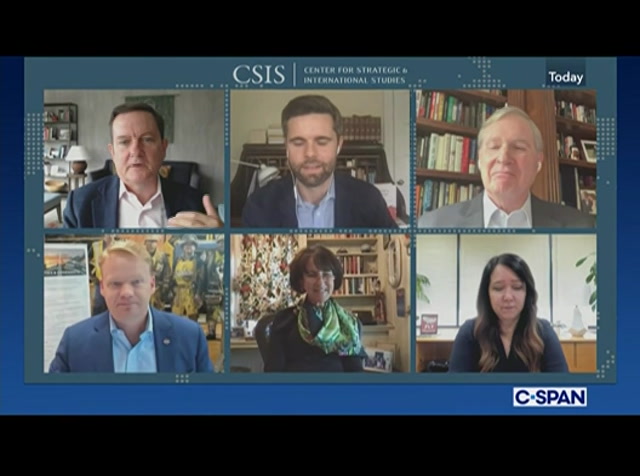 expect other countries to be confident we can do it there with them? consider for example, china is currently building 17 nuclear power plants. we're building just one here in the united states. so again, yes, a strong, bipartisan infrastructure plan will definitely provide a boost that helps u.s. companies regain a global footing and compete more effectively abroad. matthew: all right, thank you, brendan, there's a lot in there we want to get back to. especially the -- >> we're going to leave this because the house is coming in. it's part of our longtime commitment to bring you live, gavel-to-gavel coverage of congress. now live to the house floor on c-span. purposes the speaker pro tempore: the chair lays before the house a communication. the clerk: the honorable the speaker, house of representatives. madam, pursuant tohe
left
right
Borrow Program
tv

The Center for Strategic and International Studies (CSIS) hosted a virtual panel on infrastructure investment in the developing world. Panelists talked about the challenges and opportunities of global infrastructure development projects. In addition, they provided an assessment of the G7's initiative known as the Build Back Better World. Former National Security Adviser Stephen Hadley, former U.S. Trade Representative Charlene Barshefsky and the CEO of Bechtel Group were among the speakers.