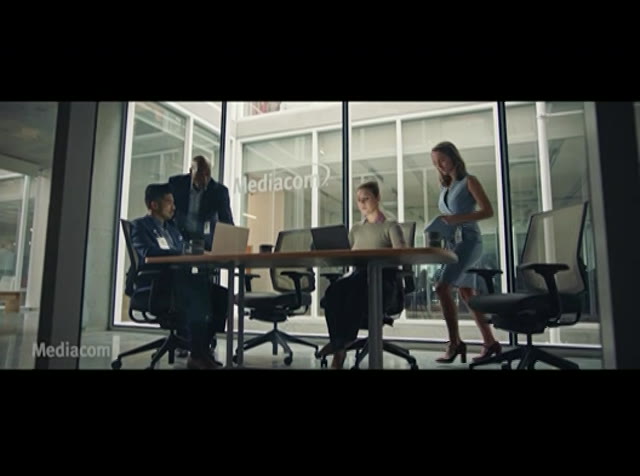 media,. >> the world -- mediacom. >> the world changed in an instant and we never slowed down. schools and businesses when virtual and we powered a new reality because we are built to keep you ahead. >> media, supports c-span as a public service along these other providers, getting you a front row seat to democracy. today, senator jeanne shaheen and former investor ryan crocker discussed getting visas to afghan allies at an event hosted by the center for strategic and international studies. watch on c-span, on c-span outward, or listen on the free radio app. final hour of "washington journal," we are joined by william barber to talk about
2:19 pm 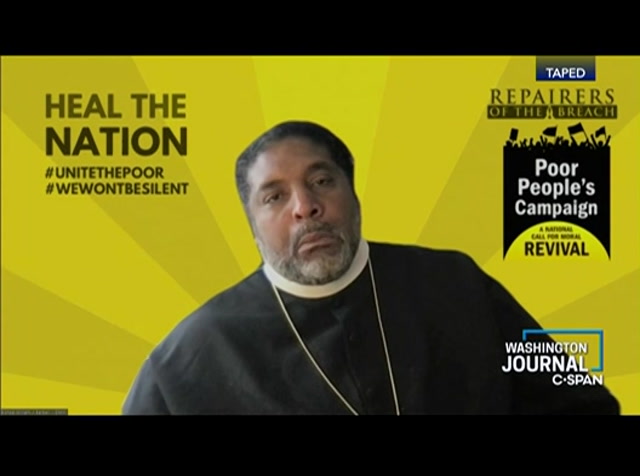 what he calls the moral movement and moment needed in america today. what is that movement and what is that moment? guest: thank you for having me on. the poor people's campaign for revival has 42 state correlating committees across the country of more than 300 partners and over 2000 clergymen connected. each of our coordinating committees is chaired by an impacted person of poverty and low wealth. even before the pandemic, the small crisis of america was we have 140 million low income people in this country. that means we have people less than $400 -- you have less than $400 for emergencies and we had
2:20 pm 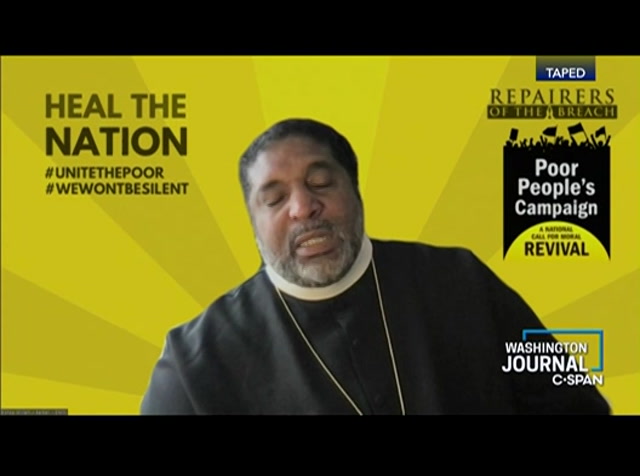 the reality of systemic racism that you can measure in many ways that affects black people, brown people, indigenous people, asian people and the collateral damage done to fight people, and we have millions of people who get up every morning, we had 87 million people uninsured in the country with the greatest medical sciences. we have a situation even before the pandemic where we spend 54 cents of the dollar on the military economy in less than 16 cents on things like infrastructure that we need to spend on, and then the prices of white evangelicalism that suggests these other issues are not symptoms of religion, but the real issue is how we dismiss, dislike, and stand
2:21 pm 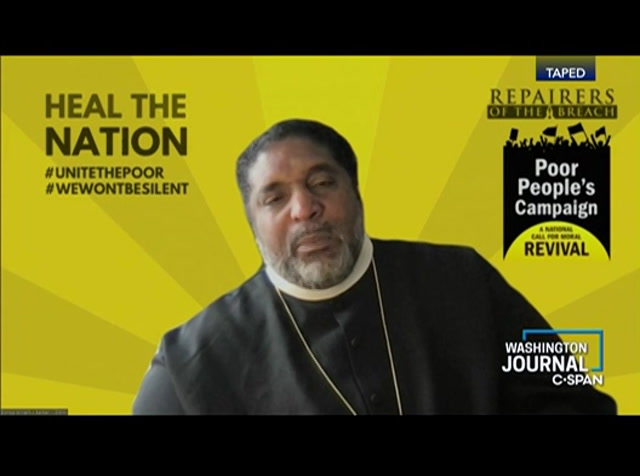 against gay people, people who have had abortions, or particular parties called republicans. and then the pandemic hit. 20 something million out of work, people in poverty, and well billionaires made nearly $1 trillion, so the poor people's campaign said we need a revolution, and there are now over 80 people signed onto saying that if we are serious about healing the nation, there are 14 specific things we need to do to address these five interlocking with systemic racism, poverty, economical devastation, and the false narrative of nationalism, and poverty, wealth is not a personal failure but a policy
2:22 pm 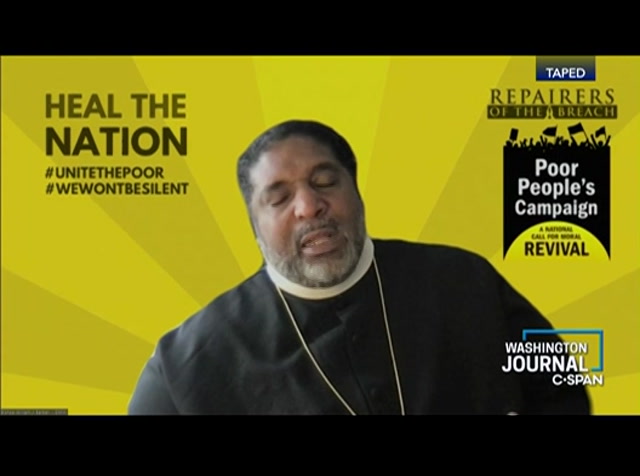 choice, and if we had living wages, $50 an hour minimum wages, it would take 32 million people out of poverty but if we provided universal health care and guaranteed voting rights and restored the voting act, we guaranteed affordable housing, if we properly measured poverty and had an infrastructure planned and deficit spending, if we invested in a way that it would come back tenfold, we have actually laid out that morality must be about looking at where the country is putting its resources and who is being benefited? is it does at the top getting more? is it those in the middle being lifted up, or are we lifting from the bottom? we need a reconstruction that will lift from the bottom and end poverty and low wages in america. it is possible in the economy in which we live. host: reverend william barber
2:23 pm 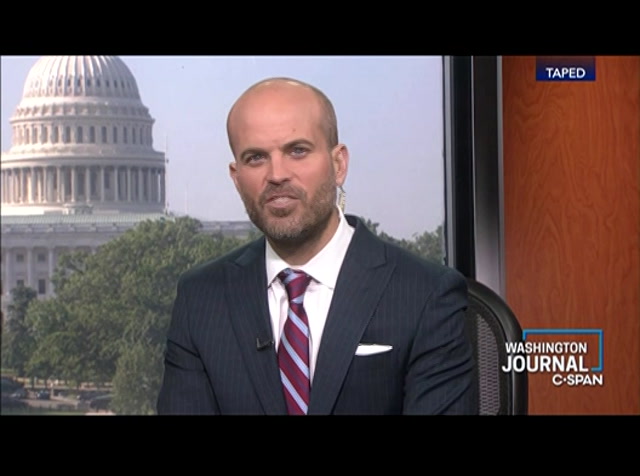 with us until 9:40 a.m. eastern. democrats, (202)-748-8000. republicans, (202)-748-8001. independents, (202)-748-8002. reverend barbara, the poor people's campaign held a demonstration come monday in washington with the house returning. when it comes to washington and capitol hill, what are the biggest roadblocks on capitol hill to achieving those issues that you just laid out? guest: well, there are several. one of the reasons we are having a season of nonviolent direct action that we launched on june 12 is what we are saying is in this moment, there are things that have to happen. we have to end the filibuster. the filibuster is not a constitution, first of all. it was used to block antislavery
2:24 pm 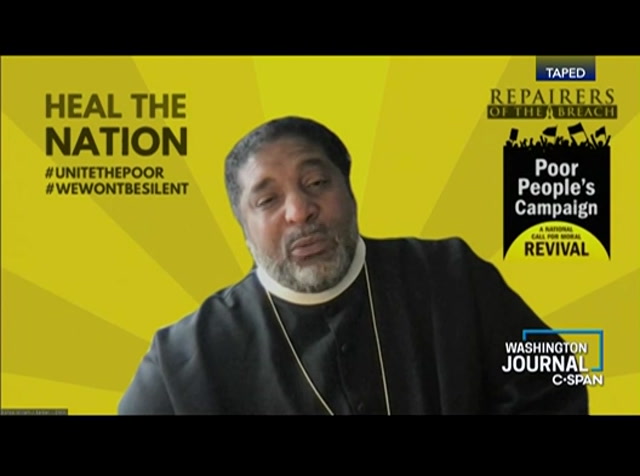 and women's suffrage. raising the minimum wage, consumer protection, you can go down the line. there has never been a time that the filibuster has been used to bring people together, and it is a violation of basic majority rules. it has been used by many times a minority, and second that we need to pass the full john lewis for the people act. notice i did not say the vote or act, but the john lewis right for the people's act, and it would get dark money out of our politics and guaranteed that people had access to early voting and same-day registration. it would make sure that our voting rights were not denied across the board or allowing state legislators to engage and infringe on voting rights. second, we need to be sure that it is not regressive, and we
2:25 pm 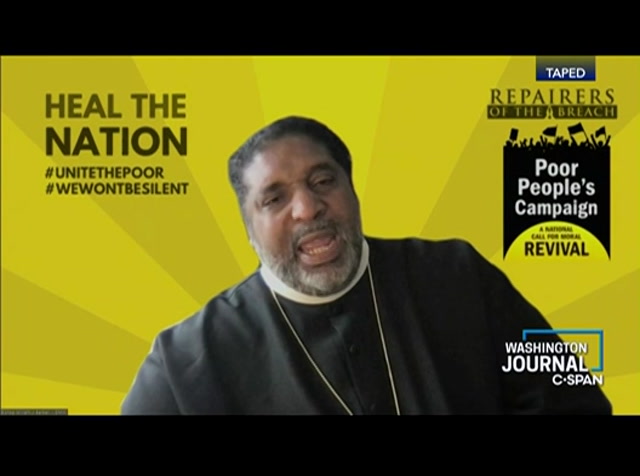 need to pass $15 and a union. $15 living wage. we need -- we have raised the living wage since 2009, $7.25, there is a county in this country where you can work a minimum wage job and a 40 basic two-bedroom -- and afford a basic two-bedroom living. we have a battle between the chamber of commerce and the constitution. if you look at the way in which the knighted states chamber of commerce and others find so much of our politics, what we have is not just an issue of race but greed. they stand against living wages and voting rights. those are the same people that are anti-expand the right to vote, funding public education, anti-health care, anti-living wages, antiunion.
2:26 pm 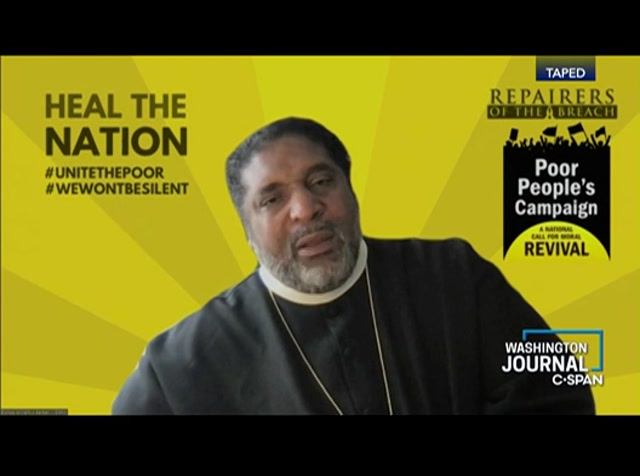 that is a problem. secondly, in this country right now, what we have is a republican party -- my grandfather was a theodore roosevelt and abraham lincoln republican -- that they have been hijacked by an extremist group of people who only want to care about the corporate interest and ruling elite. it is interesting to me that the republicans, the same ones who are extremists, when they come to congress and the senate, they get free health care, $100,000 salaries, but they do not want their constituents to have the same they have. that is concerning. lastly, 30% of the electorate is low wealth, 65 million people. we did study with columbia university and asked why are poor and low wealth people really engaged? the answer was nobody talks about them, whether they are white folks or poor black folks or latinos or whatever, we can
2:27 pm 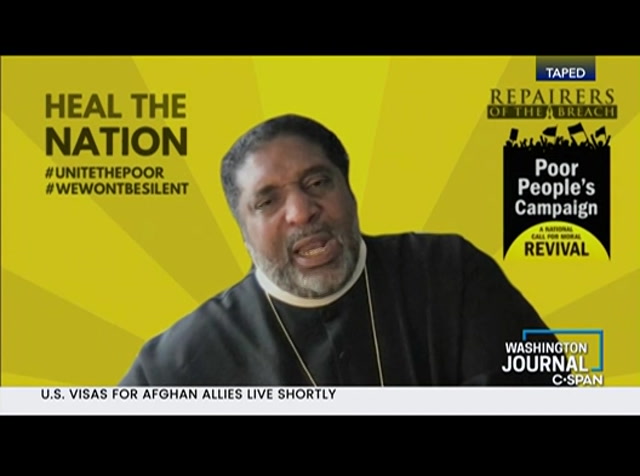 go through an entire presidential election, and the candidates will talk about the middle class, the wealthy, and never talk about one third of the electorate and in 40 million people in this country, almost 43% of the nation. that is a problem because if you are not willing to say the word poverty or talk about wealth, then we are never going to do policies that lived from the bottom up. you are always going to be stuck and either trickle down that does not work, or neoliberalism that says if you lift from the middle, everyone is lifted, when in fact, we are not going to fix what is wrong with society until we lift up the bottom. host: poorpeoplescampaign.org is where you can find the poor people's campaign on the internet. we have plenty of calls. matt, virginia, democrat. you are up first. caller: i would say i aligned
2:28 pm 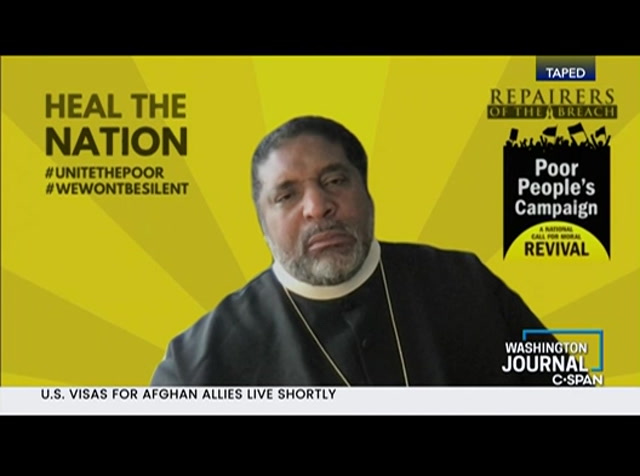 for the democrats and vote for them, but my personal politics aligned more with the democratic socialists. i look around the country, and there are a lot of democratic socialists fighting for the kind of change you would like to see. i just wonder are the democrats as a whole helping with your policies? i know there are democrats who are just as liberal and supportive of poor people, but i feel like within the democratic party, there are forces who fight against trying to change capitalism for the better to save itself from destroying itself. mr. barber -- guest: i appreciate the question. the poor people's campaign, we are not democrat or republican. i am an independent by registration. challenge both parties. we are organized, no person of elected office can stand on our stage or lead our coordinated
2:29 pm 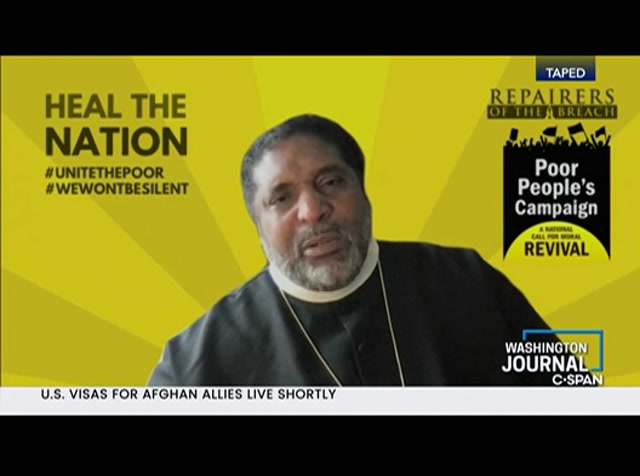 committees. there are a lot of different names you could call it, democratic socialism, reviving democracy, we tend not to get into that linkage. what we say is we need to look at all public policy and deepest moral values, whether of the constitution that says we have provided the common defense and promote the general welfare and equal protection under the law, or look at moral values, which say how you treat the least of societies in the measure of the society. when you lay those values on top of every public policy and ask this question, how does this piece of public policy lift from the bottom? how does it lift low wealth? whether it is written by democrats or republicans, we can color subs a lot of things, but i want to know, which is why we wrote a moral budget, we put a budget before the united states
2:30 pm 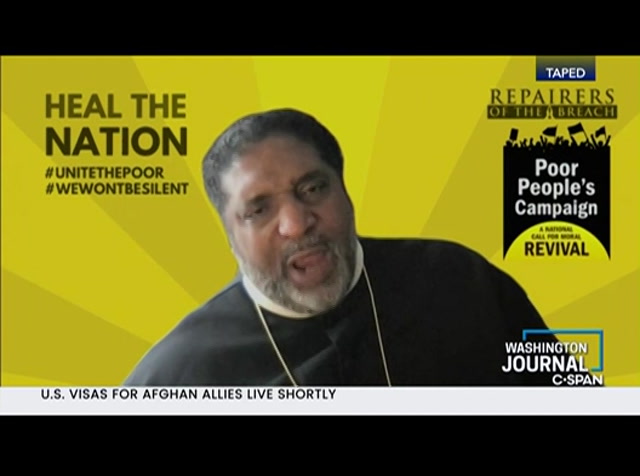 house of representatives, and we written -- we have written this resolution and it is specific because i do not want to talk about what you named yourself but what you are willing to push in public policy, regardless of what your public party is. that is the perspective we take in this work. host: you brought up ending the filibuster is one of your key priorities. let me ask about two democrats in particular and your views on them on this issue. joe manchin, the democrat from west virginia, and senator kristin simoneau, the democrat from arizona. guest: it is interesting that they do call themselves, kratz, but that is why we don't look at what you call yourself by name but what you practice. it was joe manchin who also forced $15 minimum wage out of the recovery deal. it was in there, the house passed it. that had been in the republic -- recovery plan the
2:31 pm 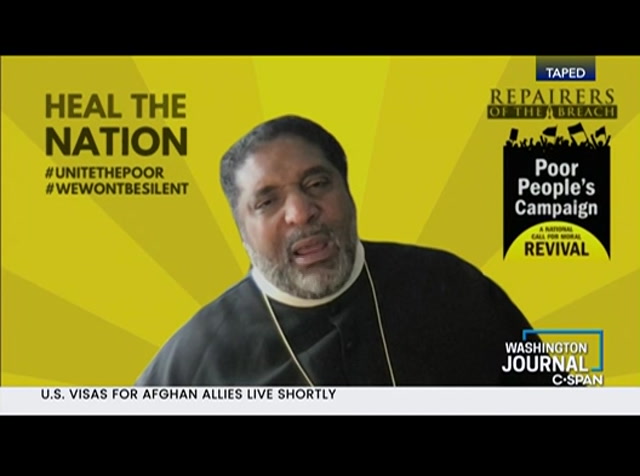 president put forward, 32 million would have had black people lifted from the living wage, 62% of people would have been helped. and in west virginia alone, over 350,000 people less than a living wage. so he voted against his own constituency, so 900,000 people in west virginia who are poor, the majority happened to be white. now you have him and kyrsten sinema, and there may >> want all of this segment online. we leave this discussion and take you a gush take you a discussion about giving visas to afghan allies. >> thank you all for joining us today. today's discussion is visas for afghan partners. what does the united states always afghan allies? -- alw
left
right
Borrow Program
tv