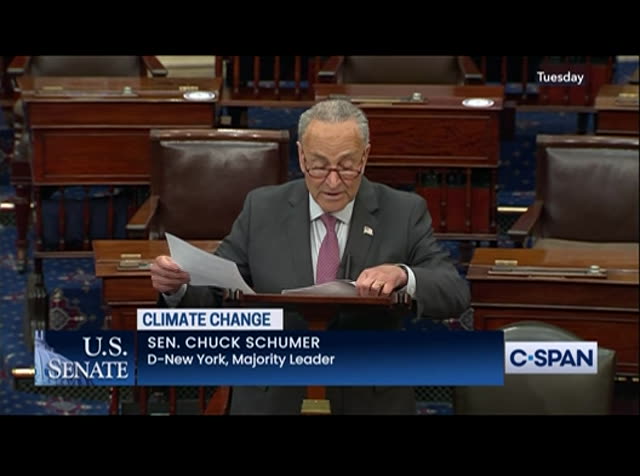 change in both urban, suburban, and rural areas. investing in both llts, resiliency and green infrastructure, that will create thousands upon thousands of good-paying union american jobs in the process. so as discussions continue on both a bipartisan infrastructure bill and a budget resolution, senators of both parties must understand that the issues of climate change and infrastructure cannot, cannot be separated from oemarks, roughly ten minutes. the presiding officer: without objection. mr. cornyn: thank you. well, just when you think you have seen it all, mr. president, something new happens here in washington, d.c. all eyes are now on d.c.'s newest asylum seekers, the members of the texas house of representatives, the democratic representatives. but the only oppressive force that these men and women are facing is the expectation that they would actually do their jobs in the texas legislature, the job they campaigned for and
5:44 am 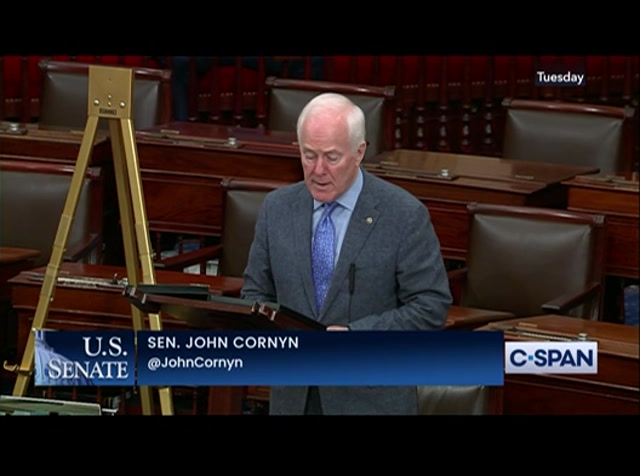 were elected to do. following unsuccessful attempts to pass an election integrity bill during the regular legislative session earlier this year, governor abbott has now called a special session for the texas legislature to consider that and other matters. that special session kicked off last tuesday -- excuse me, last thursday, but the chamber is already being held hostage by a minority of house members who are unwilling to do their job. now, democrats have raised concerns about the current draft of the bill. and make no mistake, that's why the legislative process actually exists. that's why it's important that they be there and debate the issues and actually vote on a bill. the purpose, of course, is for all sides to be able to debate, potentially amend, and vote on
5:45 am 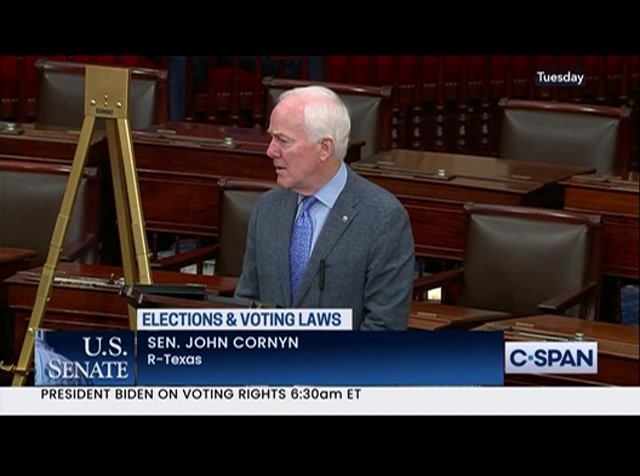 legislation. but rather than do their jobs in texas, yesterday house democrats abandoned both our state and the millions of texans that they represent and they decamped to washington, d.c. when faced with the prospect of defeat and for better or for worse, the legislative process is all about arithmatic. you're not always going to win every debate you're involved in. but that doesn't mean you leave the state and refuse to do your job. but that's exactly what they did. they got on two chartered jets, maskless with at least one case of lite beer and hopped on the jets to come to washington, d.c. the problem is and really what's
5:46 am 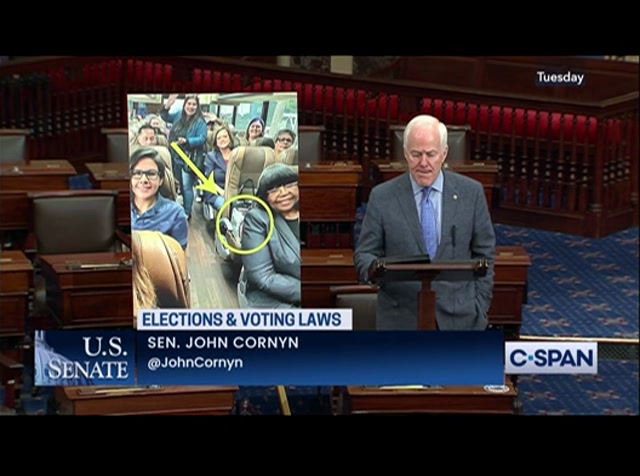 so sad is i don't think these legislators realize the irony in the situation. they are using their collective power as the minority party to stop a bill they oppose from becoming law. while doing so, they came to washington to try to convince the president and senate democrats to nuke the very senate rule that protects the rights of the minority. in other words, you might say a filibuster for me but not for thee. and as a reminder, this is the second time they've denied the legislature a quorum this year. i think it's pretty obvious that this is nothing more than a political stunt when these lawmakers skipped town with no plan for when they will return to their jobs in texas. and, frankly, the president
5:47 am 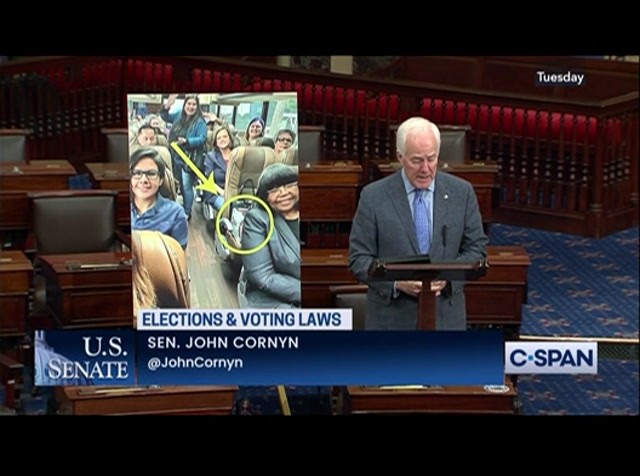 under the texas constitution -- i mean the governor under the text constitution can -- text constitution can continue to call as many special sessions he wishes without limitation. so we all know who you this will end. they will eventually go home after the cameras leave and after the press loses interest in this political stunt. they'll go home and they will participate in the process. but it's telling that these democrats and this house of representatives chose to race toward tv cameras in washington rather than present their arguments in the legislature. and, mr. president, this is not without some risk to them. i'm advised that they were on federal property and referred to a website this is actually a fund raising site for their efforts. we all know that there are limits, in fact strict limits on any fund raising on federal
5:48 am 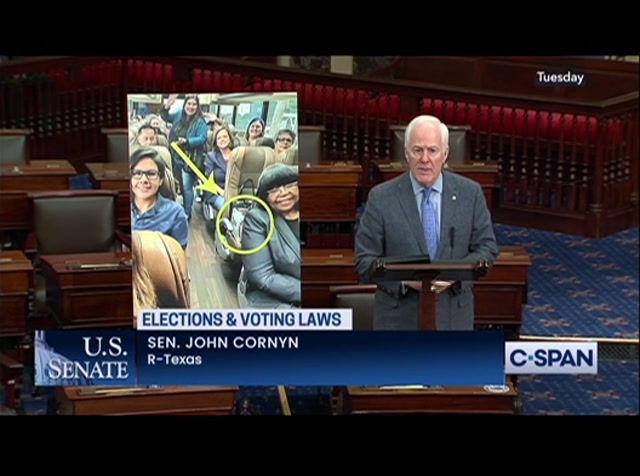 property. so they may have crossed a line unwittingly or not. but this is simply an embarrassing dereliction of their duty and a shameful political stunt, as i said. they can't win so they're doing the equivalent of i'll take my ball and go home. or in this case i'm simply running away. but as texans standing up to a fight is part of who we are, even if you know in the end you may not prevail. but instead they turned their backs, hopped on a private jet, and ran from this fight. like our democratic colleagues in congress, texas state lawmakers have tried to create a false choice between voter access and election security. i think it boils down to this. we should be making it easier to vote and tougher to cheat, plain and simple.
5:49 am 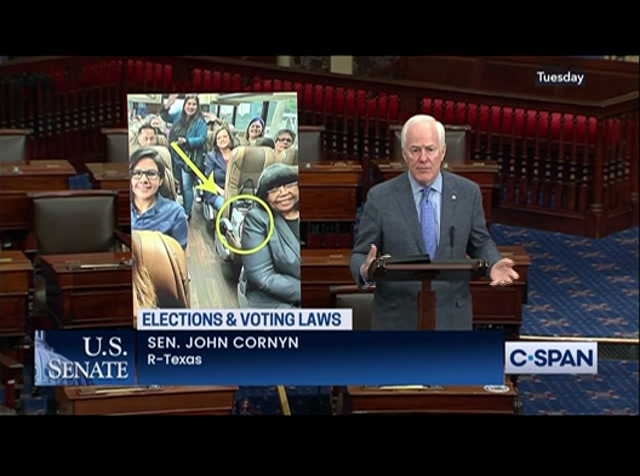 it's disingenuous and downright false to claim that any effort to prevent fraud is an availed attempt at voter suppression. we know that minority voters, voters of color voted at unprecedented envelopes in the 2020 election owe owe levels in 20 election. we had 60% of voters vote and the highest of african american and hispanic voters. so the idea that somehow people want to be able to vote can't vote, even though we ordinarily have two weeks of early voting before the general election. we have mail-in ballots for people who are disabled or over 65 or otherwise will not be in town on election day. and of course we have election day voting as well. in 2020 we had 11.3 million
5:50 am 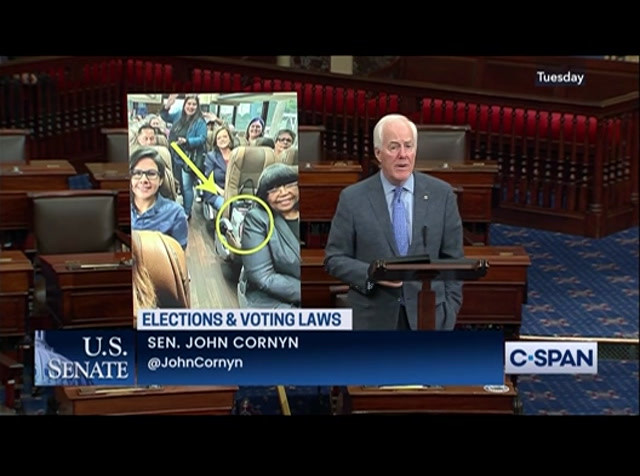 texans cast their ballot. like i said, 66% of registered voters. the last time i was on the ballot in 2014, we had 4.8 million voters, 4.8 to 11.3 in six years alone. so believe me, there is robust voter participation and nothing the texas legislature is considering will deny people with the legitimate right to vote an ability to cast their vote. and that's appropriate that they should do so. there are other additional items on the governor's call for this special session, including things like bail reform, family violence prevention, and, of course, our -- the democrat house members by fleeing town and by coming to washington in this political stunt are abdicating their responsibility to deal with these other issues as well. it's not just about election law
5:51 am 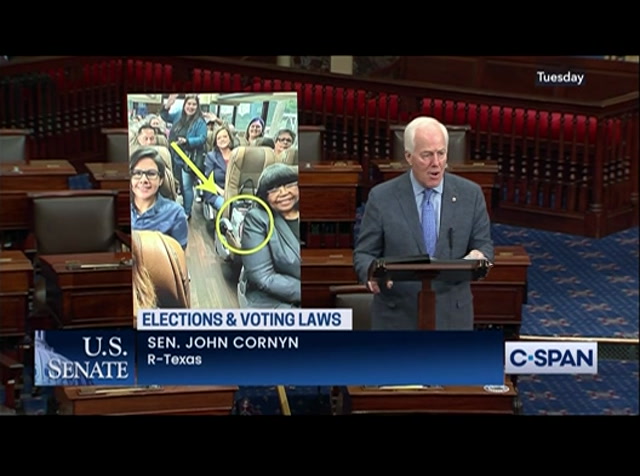 reform. it's about these other issues, like bail reform and family violence prevention. i believe firmly, and i'm confident i'm in the majority of my constituents, my 29 million constituents, that they actually expect us when we run for office and when we get elected, they expect us to show up for our jobs and not take part in a highly orchestrated and ethically dubious act of political theater. mr. president, i yield the repun
5:52 am 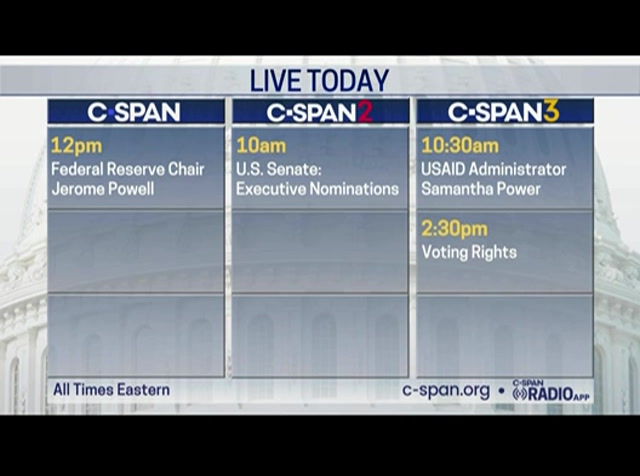 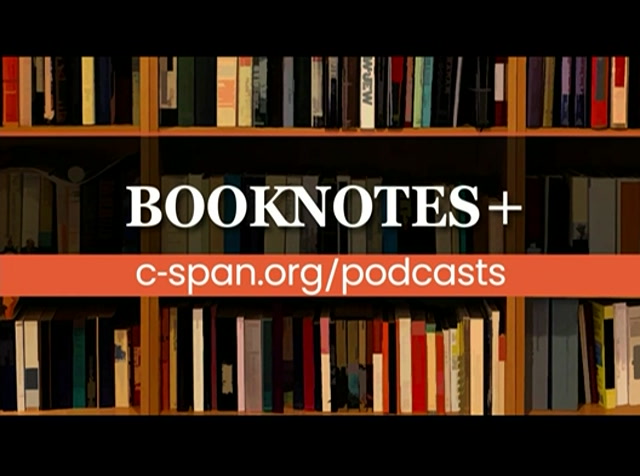 legislation from having a quorum to conduct business. this is about half an hour.
left
right
Borrow Program
tv

Senator John Cornyn of called Texas state lawmakers in Washington DC "asylum seekers" after they left the state to stop a vote on voting changes in their state. The Texas Republican said they did it to avoid defeat on the state voting bill, which is undemocratic. Sen. Cornyn called it a "political stunt."