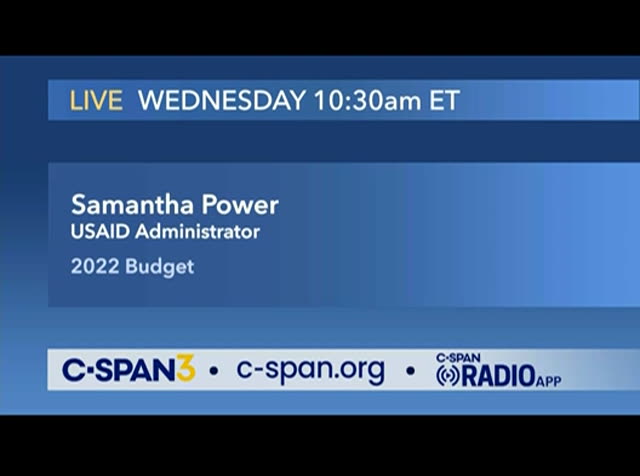 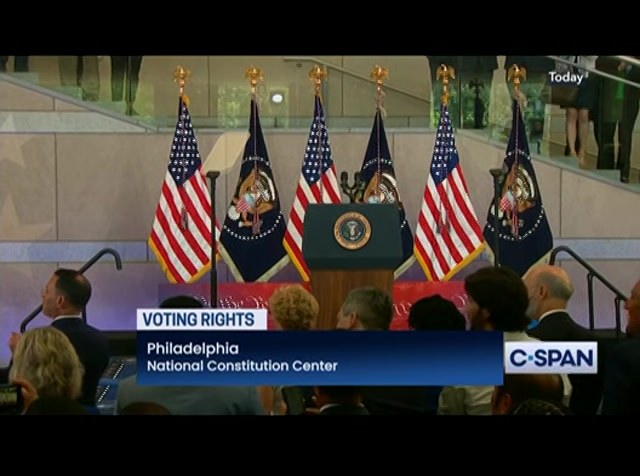 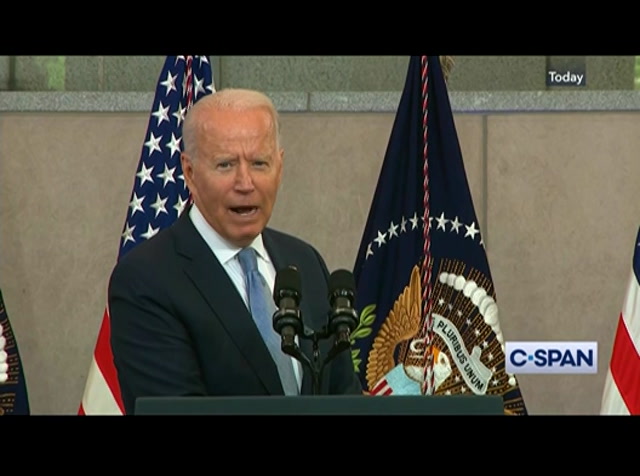 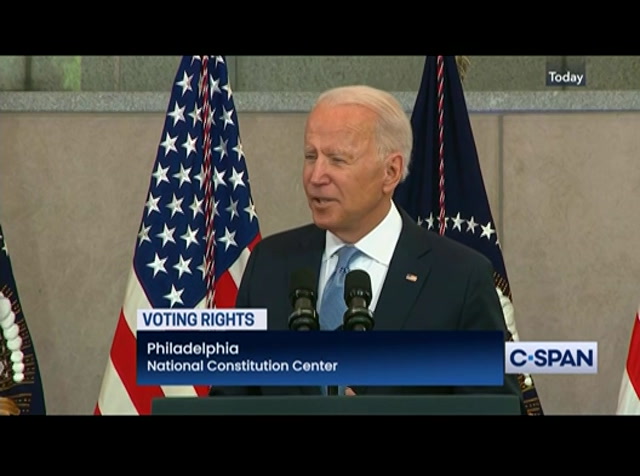 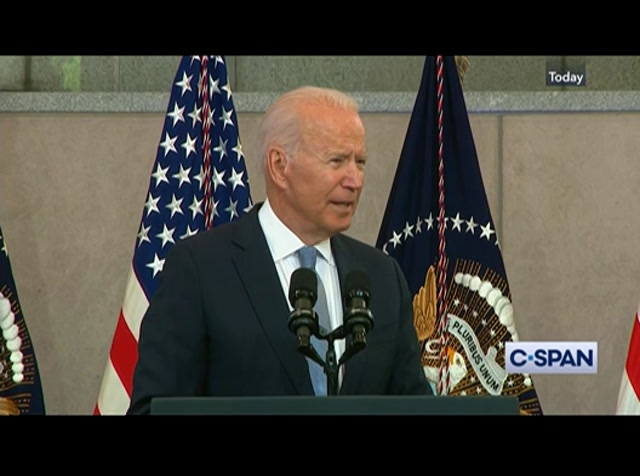 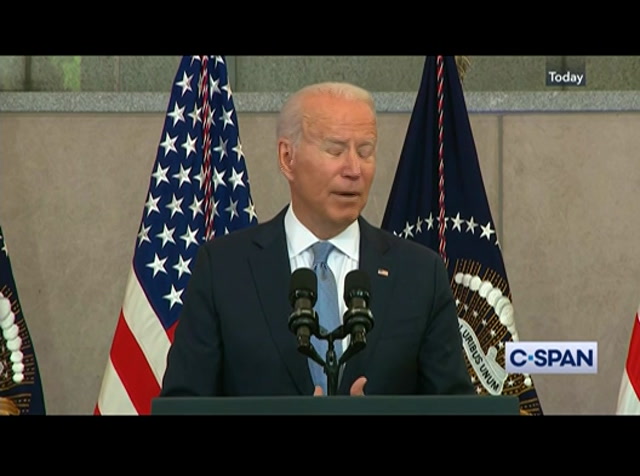 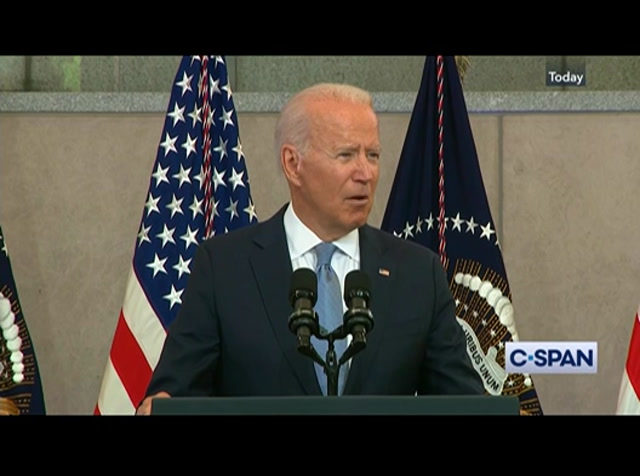 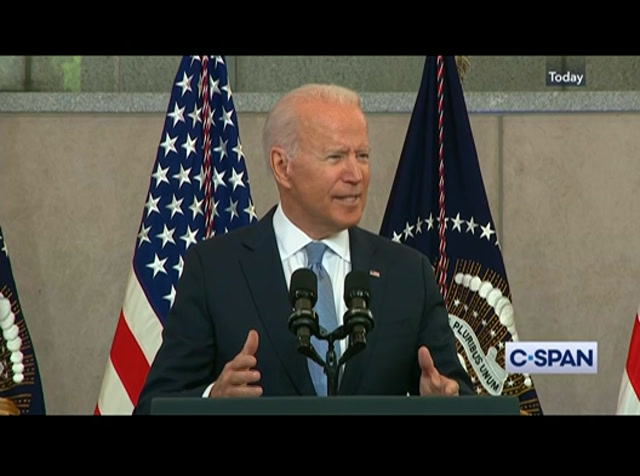 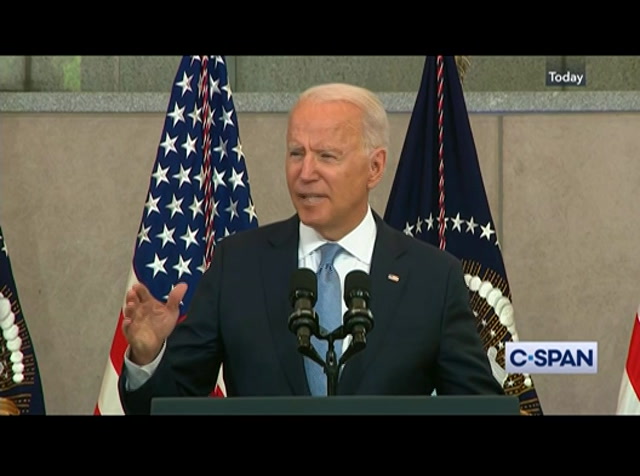 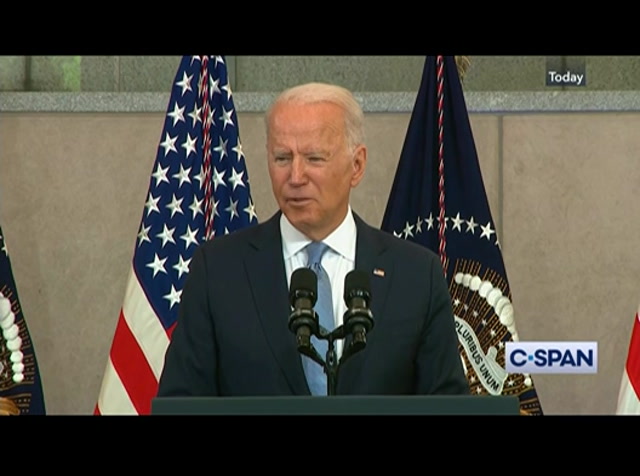 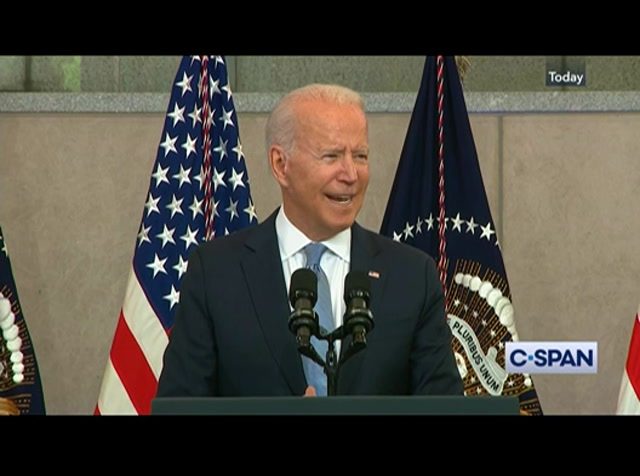 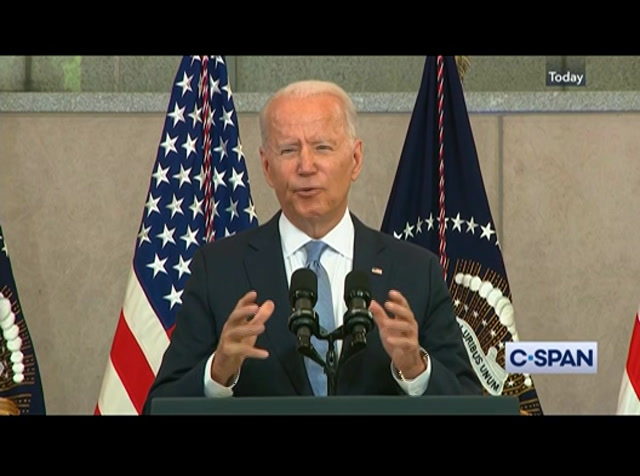 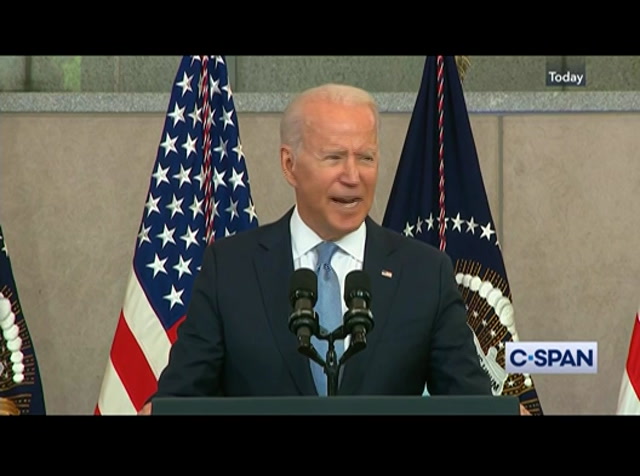 help in voter suppression in the states, get dark money out of politics. give voice to the people, create it and in partisan political gerrymandering. last month, republicans opposed, even debating, even considering for the people's act. senate democrats stood united to protect our democracy and the sanctity of the vote. we must pass the for the people act. it's a national imperative. we must also fight for the john lewis voting rights advancement act. to restore and expand voting protections to prevent voter suppression.
5:15 pm 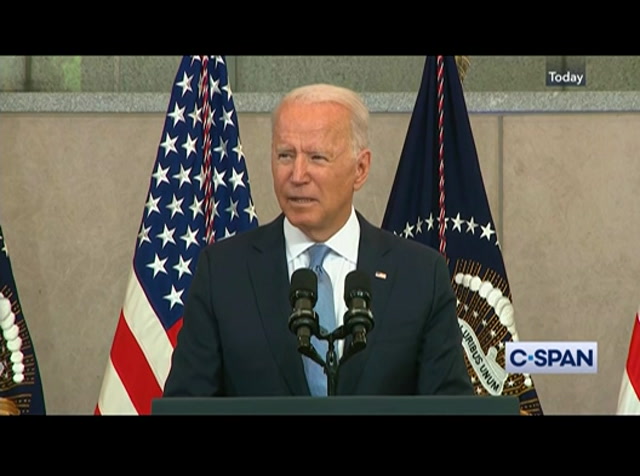 just weeks ago, supreme court, yet again weakened the voting rights act. and it called it a significant race-based disparity in voting opportunities. the court's decision, as harmful as it is, does not limit the congress ability to repair the damage them. that's the important point. it puts the burden back on congress to restore the voting rights act to its intent. they passed the for the people act and the advancement act, i will sign it head that the whole world see it. that will be an important moment.
5:16 pm 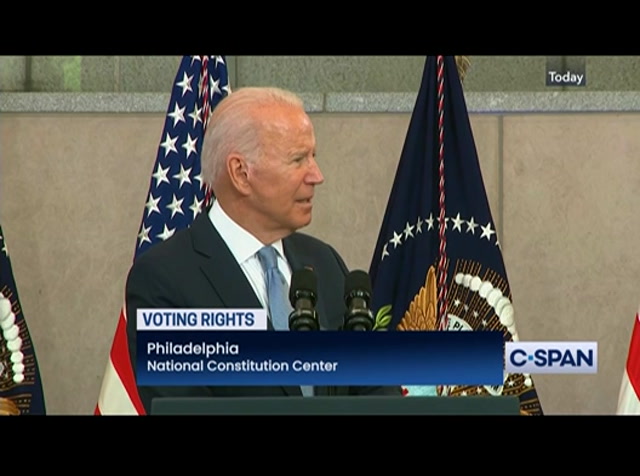 in the world is warming. the world is warming. and dwight knows what i'm talking about. for real. you know the world is wondering, what is america going to do? we also have to be clear about the obstruction we face. legislation is one tool, but not the only tool. and it's not the only measuring of our obligation to defend the democracy. for example, attorney general merrick garland announced that the united states department of justice is going to be using its authorities to challenge the onslaughts of state laws undermining voting rights in old and new ways. focus will be on dismantling grace and discriminatory laws like the recent challenge to george's vicious anti-voting law. the department of justice will
5:17 pm 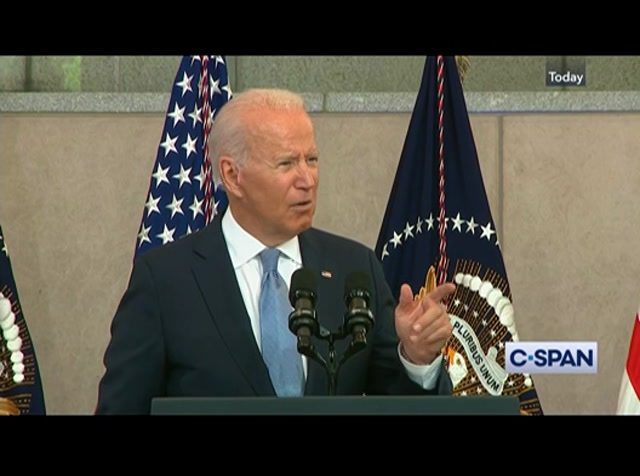 do so with the voting rights division that is doubling in size and enforcement. civil rights groups and other organizations announced their plans to stay vigilant and challenge the odious laws in the courts. republican led state legislator wants to allow partisan poll watchers to intimidate voters and impartial poll workers. they want voters to dive further and be able to be at a position where they wonder who's watching them and intimidating. to way longer to vote. to drive a hell of a lot -- excuse me, a long way to get the bow. they want to make it so inconvenient that they hope people don't vote it all. that's what this is about. this year alone, 17 states have
5:18 pm 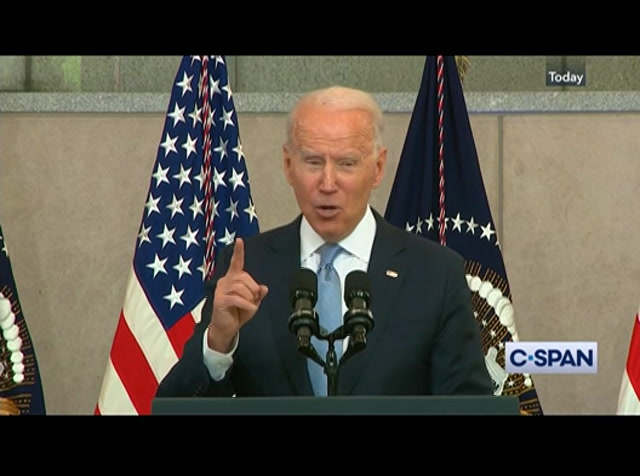 enacted, not just proposed, but enacted 28 new laws to make it harder for americans to vote. not to mention, nearly 400 additional bills republican members of the state legislators are trying to pass. this 21st century jim crow assault israel. it's unrelenting. and we are going to challenge it vigorously. while this broad assault against voting rights is not unprecedented, it's taking on a new form. it's no longer just about who gets the vote or making it easier for eligible voters to vote, it's about who gets to count the vote. who gets to count whether or not your vote counted at all.
5:19 pm 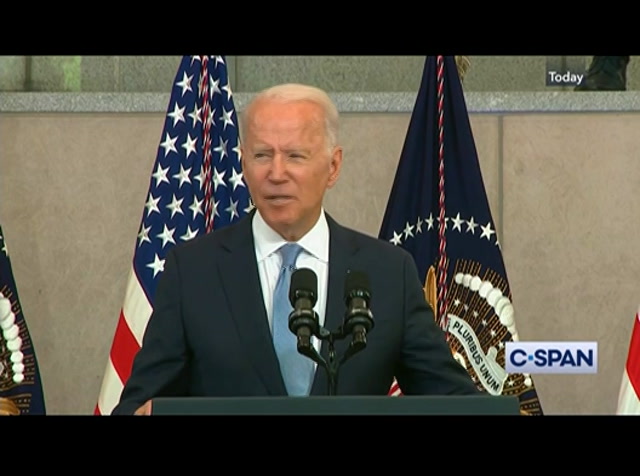 is about moving from election administrators who work for the people to polarize state legislators and partisan actors who work for political parties. this is election subversion. the integrity of free and fair election in our history. never before decided to gets to count, count will votes count. some state legislators want to make it harder for you to vote. and if you vote, they want to be able to tell you your vote doesn't count for any reason they make up. they want the ability to reject the final count and ignore the will of the people. if their preferred candidate loses. and they are trying, not only targeting people of color, but they are targeting voters of all
5:20 pm 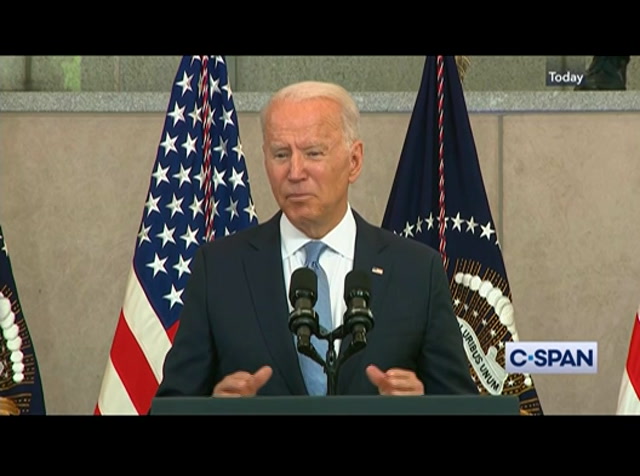 races in the background with a simple target, who did not vote for them. thus the target. it's unconscionable. it's hard to declare just how critical it is. it simply unconscionable. we've got to shore up our election system and address election subversion. not just from abroad, which i spent time with putin talking about, but from home. from home. was asked those who represent us at the federal, state and local levels, will you deny the will of the people? will you ignore their voices? we have to ask, are you on the side of truth or lies, fact or fiction, democracy or autocracy? that's what it's coming down to. which brings me back to the most important thing we have to do.
5:21 pm 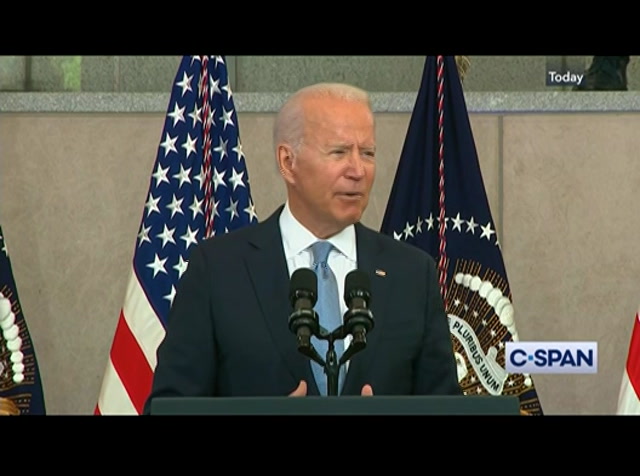 we have to forge a coalition of americans of every background of political parties. the faith leaders, labor leaders, business executives, to raise the urgency of this moment. because as much as people know they are screwing around with the election process, i don't think that most people think this is about who gets to count what vote counts. literally, not figuratively. evo for certain electors that vote for somebody for president. the state legislator comes along in their proposal, they say, we don't like those electors, we will vote for the other guy, or the other woman. here's the deal. in 2020, democracy was put to a test. first by the pandemic, then by a desperate attempt to deny the reality of the results of the election.
5:22 pm 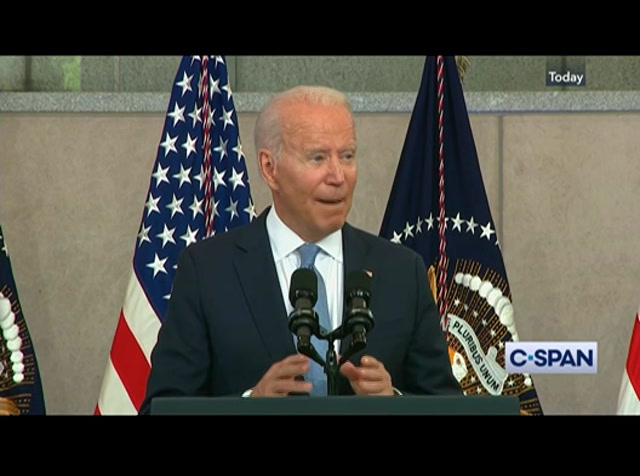 and then, my violent and deadly insurrection on the cop adult -- capital, the citadel of our remarks. i thought i had seen it all, or most of it all, but i never thought i would see that for real. and in spite of what you see on television, and you saw, you have senator saying it was just a day at the capital. just people visiting the capital. folks, but we met the test because of the extraordinary courage of election officials, many of them republicans, our court system, the most brave capitol police officer, because of them, democracy held. look how close it came. for real, how close it came. we will face another test in 2022. a new wave of unprecedented voter suppression and raw and sustained election subversion. we have to prepare now.
5:23 pm 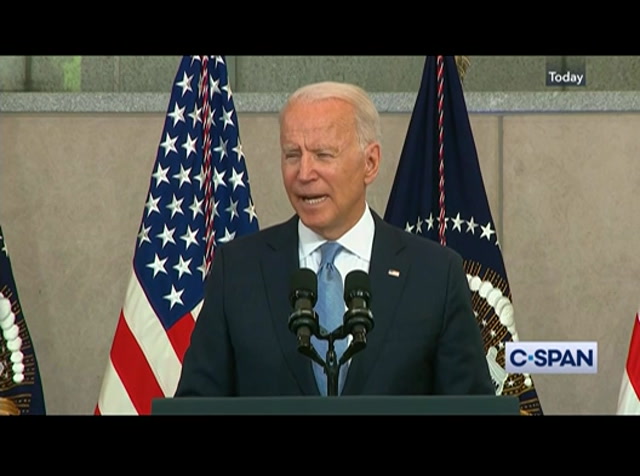 as i said time and again, no matter what, you can never stop the american people from voting. they will decide, and the power must always be with the people. just like what we did in 2020, we have to prepare for 2022. we will engage and educate voters about the changing laws. registering them to vote and then get the vote out. we will encourage people to run for office themselves at every level. we will be asking my republican friends in congress and states and city to stand up and help prevent this concerted effort to undermine our election. in the sacred rights of vote, have you no shame? [applause]
5:24 pm 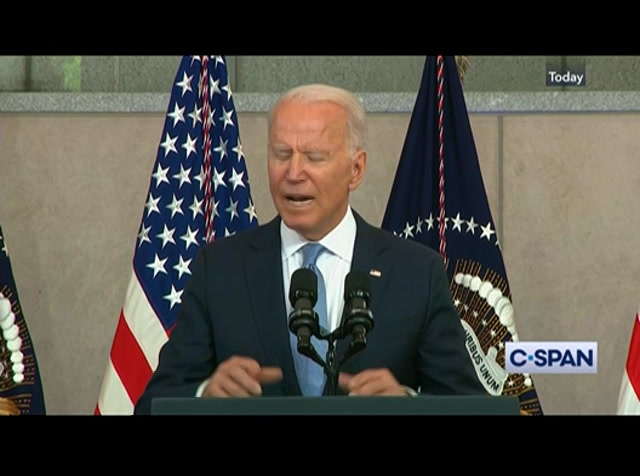 whether it's stopping foreign interference in our election or the spread of disinformation from within, we have to work together. vice president harris and i were making it clear that there is real peril in making raw power, wrapping the idea of liberty with the centerpiece of common light. founders understood this. their women of seneca falls understood this, the brave, heroic foot soldiers understood this. so must we. this isn't about democrats or republicans. it's literally about who we are as americans. it's about the kind of country we want today. the kind of country we want for our children and grandchildren tomorrow. and quite frankly, the whole world is watching. [applause] folks. i'm not being sentimental.
5:25 pm 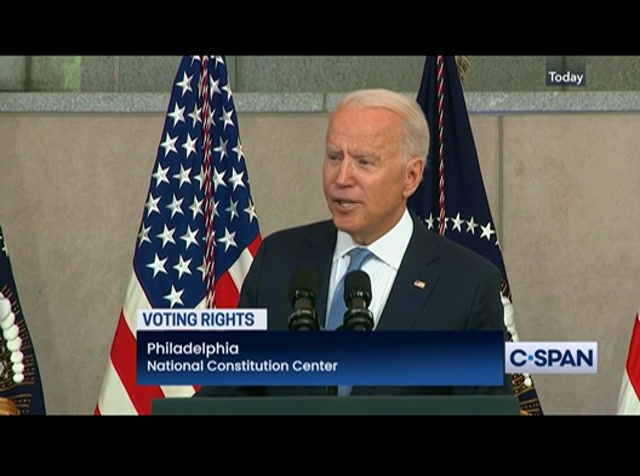 i'm not preaching to you. i'm just giving it to you straight, as i promised i would always do. lay things out on the line. honor your trust with trust. so hear me clearly. there's an unfolding assault taking place in america today, and attempt to oppress and subvert the right to vote in fair and free elections. an assault on democracy, and assault on liberty, and assault on who we are, who we are as americans. but make no mistake, bullies and merchants of fear, peddlers of lies are threatening the very foundation of our country. and gizzi no pleasure to say this. i never thought my entire career i'd ever have to say. but i swore an oath to you, to
5:26 pm 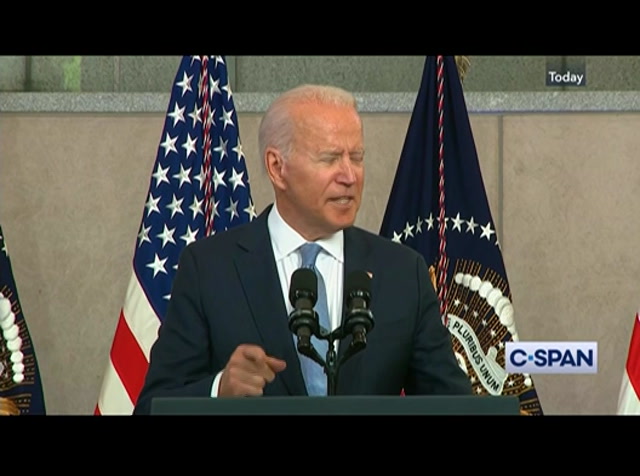 god, to preserve, protect and defend the constitution. that's an oath that forms a sacred trust to defend americans all threats both foreign and domestic. [applause] the assault on free and fair elections is just such a threat, literally. i've said before, we are facing the most significant test of our democracy since the civil war. it's not hyperbole. since the civil war. the confederates, back then, never breached the capital as insurrectionists did on january the sixth. i'm not saying this to alarm you, i'm saying this because you should be alarmed. i'm also saying this, there's good news, it doesn't have to be
5:27 pm 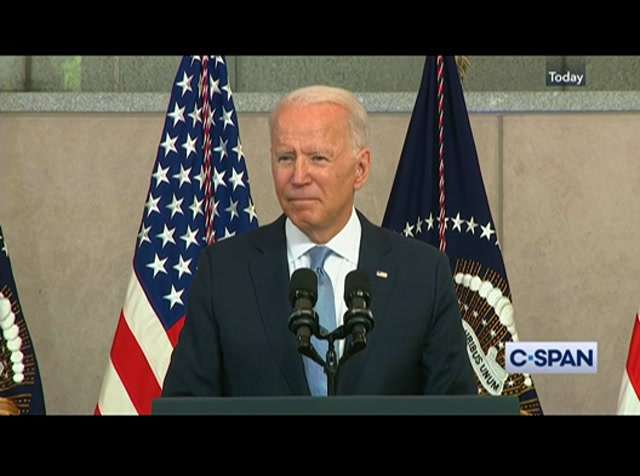 this way. it doesn't have to be, for real. we have the veins, we just need the will, the will to save and strengthen our democracy. we did it in 2020. the battle for the soul of america. in that battle the people voted. democracy prevailed. our constitution held. we have to do it again. my fellow americans, it requires fair mindedness, devotion to justice, love of country. it requires united purpose. here and now, we the people will never give up. we will not give in, we will overcome, we will do it together. guaranteeing the right to vote, ensuring every vote is counted
5:28 pm 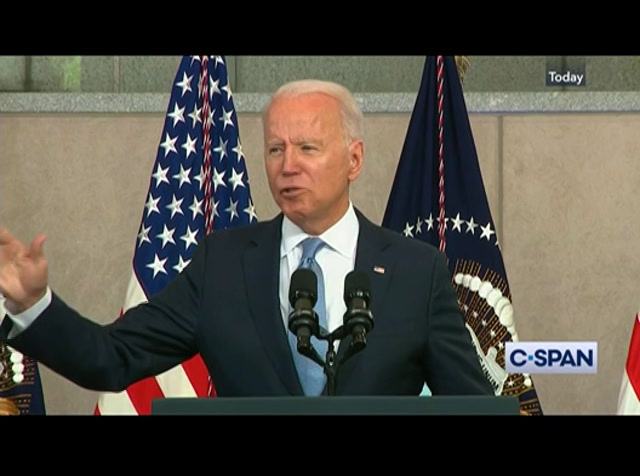 has always been the most patriotic thing we can do. just remember, our late great john lewis said, freedom is not escaped, it's an act. freedom is not escaped, it's an act. we must act and we will act. our cause is just, our business clear. our hearts are full. for america itself, we must act. god bless you all and may god protect our troops and all those who did watch over our democracy. so act. we've got to act. thank you. ♪
5:29 pm 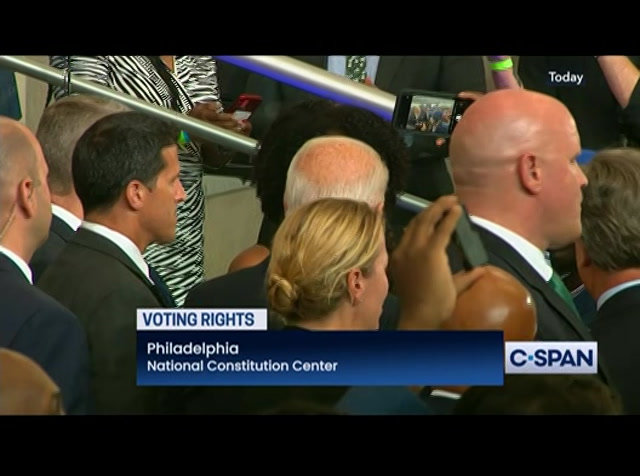 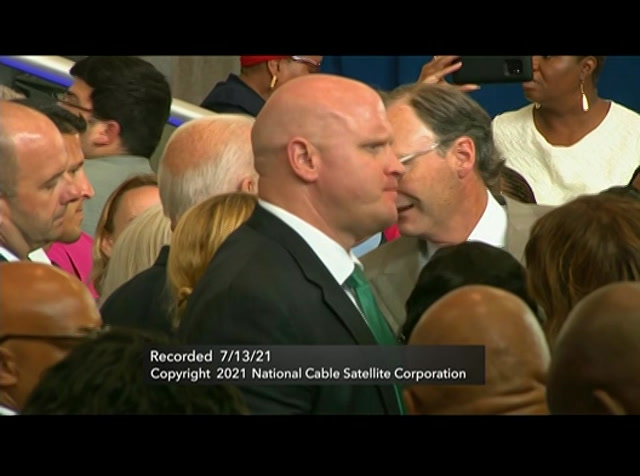 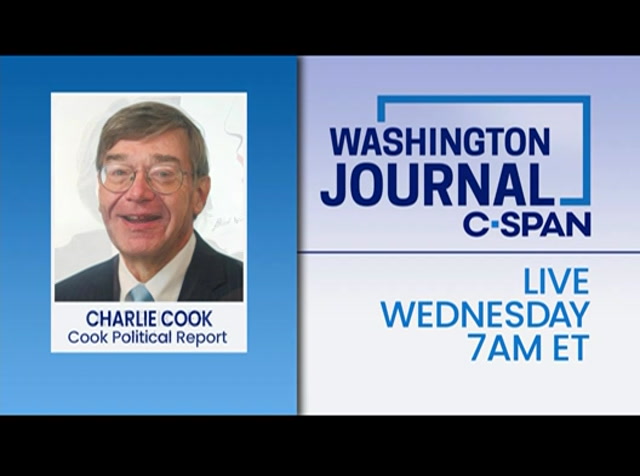 >> c-span's washington journal, every day we take your calls live on the air on the news of the day and we discussed policy issues that impact you. coming up wednesday morning we will talk with political analyst charlie cook about his recent column on the new era volatilitn american politics. live at 7:00 eastern wednesday morning. join the discussion with your phone calls, facebook comments, texts and tweets. members of the u.s. house delegation from texas joined texas democratic state legislators to talk
left
right
Borrow Program
tv

President Biden said the United States is facing "the most significant test of our democracy since the Civil War," during a speech he delivered at the National Constitution Center in Philadelphia. He accused Republicans of committing "election subversion" and called on Congress to pass both the For the People Act and the John Lewis Voting Rights Act, which he promised to sign. The president also said the Justice Department would fight laws passed by state legislatures that make it more difficult for people to vote.