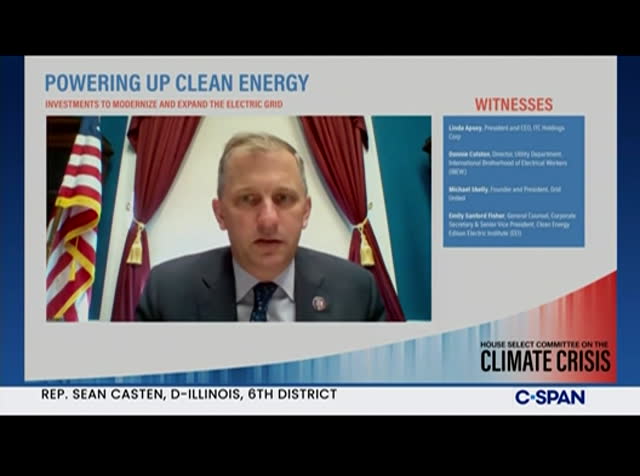 there are these conflicts of interest between groups, especially when we get to interregional connections. i would remind everybody, including my friend mr. crenshaw, that it is comparatively really easy to permit gas pipelines in this country. we have made it chronically difficult to permit transmission . a big part of that is government structure. a big part of that is in the failure to have a single point of control in the projects. i welcome all thoughts on what we might do, legislatively, to move that a little faster than the snails pace it has moved in the last 30 years. i think you and yield back. >> we will reconvene the committee immediately after the second vote. we stand in recess until that time. >> representative gonzalez you are recognized for five minutes. representative gonzalez: thank you to our witnesses and panel. we have found an area with
2:42 pm 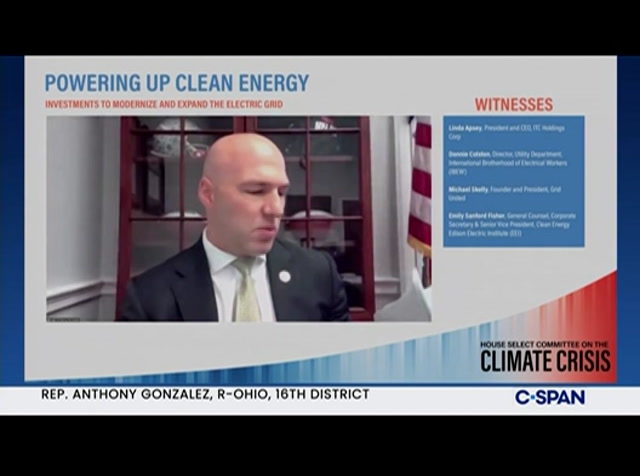 bipartisan agreement with respect to the need to modernize the grid. the how and why is the challenge. i would like to associate myself with respect to the cost. i always like to see my friend mr. crenshaw. he centers us in reality. i want to start with something. i am here to open alluding to a terrible storm in the southeast. the heart of that everybody affected. i went to noaa's website and found the global warming and hurricane results here. we are getting to a point where every time a bad storm happens we blame climate change. "neither models nor analyses
2:43 pm 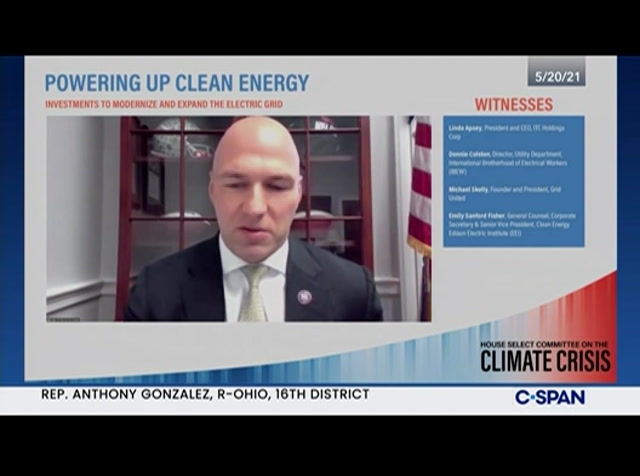 support the notion that greenhouse gas induced warming leads to large increases in either tropical storms or overall hurricanes in the attic. one of our studies projects an increase in hurricanes over the 21st century. we estimate that such an increase would not be detectable until the latter half of the century." it is also true that deaths from natural disasters globally are down 92% of the which is great. -- are down 92%, which is great. california is an example of how we want our energy to exist broadly across the country. again, some data. between 2011 and 2020, electricity prices in california rose seven times more than in the rest of the country. at the same time, carbon emissions rose 4.1% in
2:44 pm 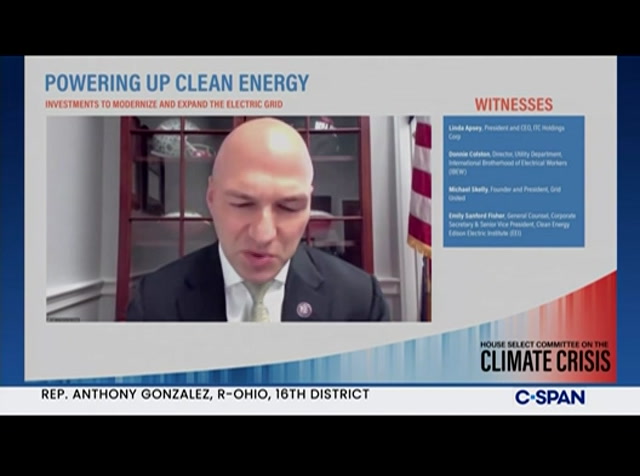 california, even as they declined 3.5% in the average remaining 49 states. that's something i want for ohio. i think we need to be smart about how we move forward and focus on the things we agree on and also on the basic research necessary to invent our way out of what is certainly a challenge with respect to climate change and make sure we go to a smart way that is affordable and lasting. so, i want to start with ms. fischer. as i'm sure you are well aware, congress is debating and negotiating and infrastructure package that hinges on the question, how do you pay for it. that's how do you pay for it? -- how do you pay for it? what sort of policies should we be pursuing to make energy investments more attractive to private investors? ms. fischer: by member companies
2:45 pm

are terrific at raising capital. we are the most capital-intensive industry in the united states. over the last 10 years we have spent $1 trillion auto grid modernization and related efforts. what the usual industry says remains true here. clear direction usually helps us attract capital. representative gonzalez? does representative gonzalez: -- representative gonzalez: mr. skelly can you explain how this will impact energy use? we have to have reliable ways to store the energy. how would that project funnel storage? mr. skelly: with electricity consumption and production,
2:46 pm 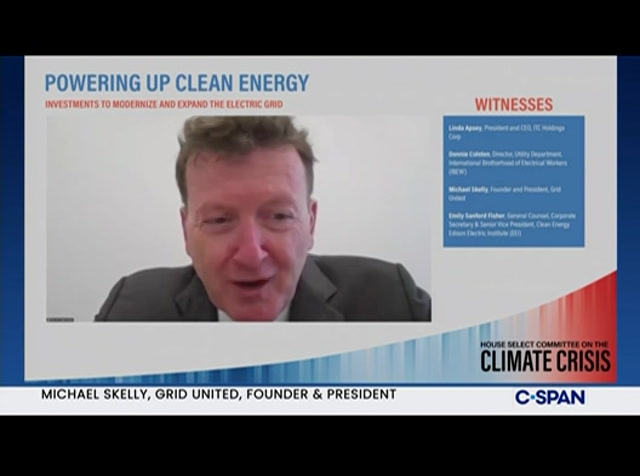 storage is important. there are interesting advances. i am on the board of a company working hard and making good progress and storage. -- with storage. the other good way to think about it is with transition, you can move energy around the country. that actually can reduce some of the need for storage, because, as we all know, wind and sunshine are variable across the country. moving energy in time is important. but also, moving it in space can be just, or even more helpful in doing so. representative gonzalez: if we are going to take arizona sunshine and push it, that may require challenges. with that i yield back. thank you. >> representative bonamici you
2:47 pm 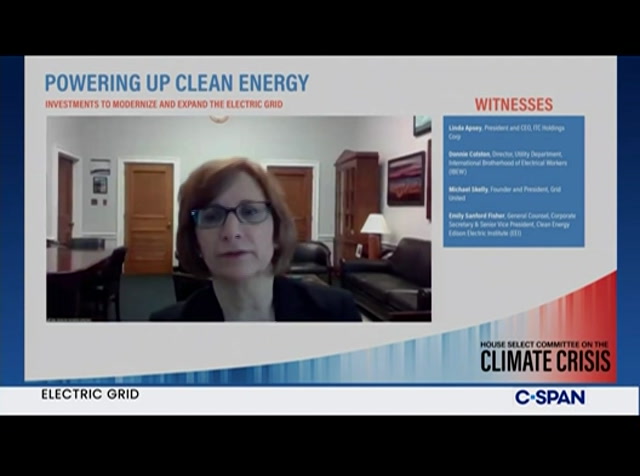 are recognized for five minutes. representative bonamici: we know that adjusting to the climate crisis and strengthening investments in our electric grid will create millions of good pain, high-quality jobs. that can help displaced -- good paying, high-quality jobs. that can help displaced workers recover. last fall i had a great visit with the local 48 in part -- portland. they have a partnership with the national electric contributors association. an electrical apprenticeship program demonstrates how our transition to a green energy economy can provide an extraordinary opportunity to provide good paying jobs. the program is also an excellent example of why we need to protect and strengthen our registered apprenticeship system.
2:48 pm 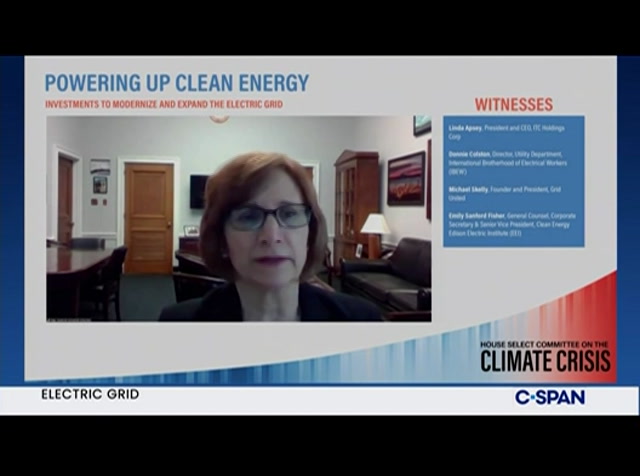 so, i am one of the leaders on the education committee. i know we also have an obligation to address failures and make sure clean energy investments make a difference. united as you noted-you anticipate the need for 60,000 over the next years. how can congress support efforts on its to generation and giving more workers we need help? >> at ib w itself, we have more than 300 training centers throughout the united states in almost all communities. we partner with our partner utilities on training those linemen. we also partner with our
2:49 pm 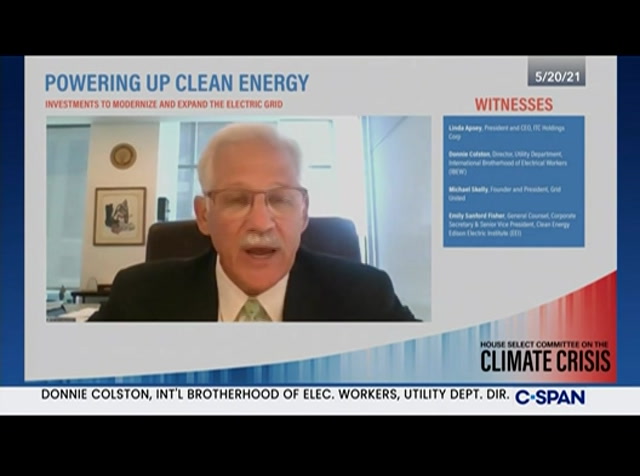 contractors on training those linemen. with the work is there, that allows us to take in additional ib w apprentices. the apprenticeship program at ib w is unique, as in the other skilled trades. not only do we give you an education, we are going to give you a job that will put practical gills to work at the exact same time. they will go hand in hand. the way congress can help us is as more transmission lines are approved and get up and running, that puts more of our members to work. as we modernize the grid on the distribution system, or even the downtown network system, as we modernize that, technology allows our utility partners to add additional workforce to their cities. as permitting comes into play,
2:50 pm 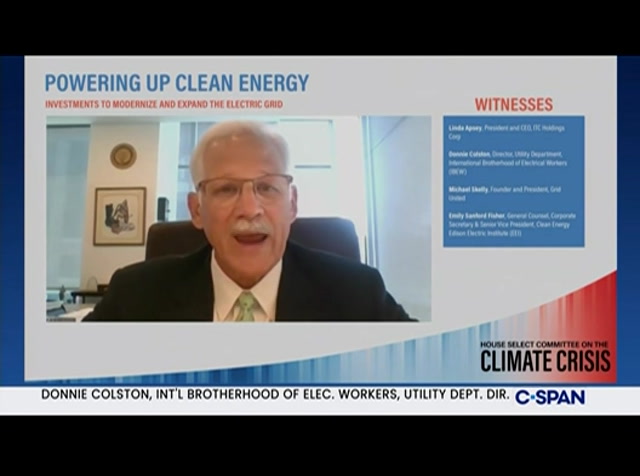 we can build for the future and not just build a transmission line that is just going to meet today's needs. we have the ability to bring on the workforce to do that as they are coming on. rep. bonamici: you heard about the challenges in interstate transmission lines to improving resilience on the great. how will the department of transportation use existing rights-of-way for transition lines to address challenges? also if ms. appc --apsey can weigh in.
2:51 pm 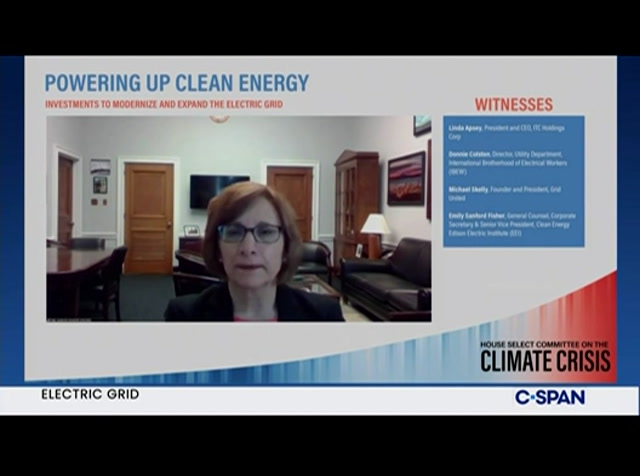 mr. skelly: i would say that on using existing rights-of-way, this is fairly common practice. one, when you are developing transmission lines, or pipeline, or railroads, you try to use other existing infrastructure in order to minimize disturbance. i think the guidance originally issued speaks to, and it is incredibly important, that initiatives like this raise the level of leadership around transmission. we are really heartened by the emphasis across the government. what do we need to do to facilitate this expansion? that is maybe the most in court at element -- important element of the guidance of d.o.t..
2:52 pm 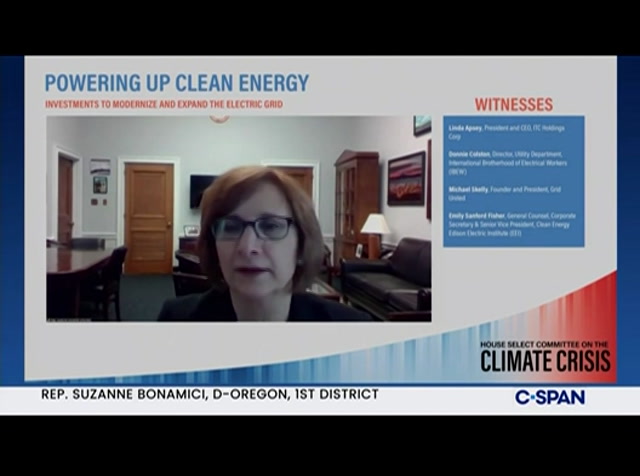 rep. bonamici: the talk ticked down, but do you have one or two words on whether federal investments would help? ms. apsey: going back to accelerating timelines and bringing stakeholders together so we can get certainty, we need to move forward with this investment. time is of the essence. rep. bonamici: thank you so much. i yield my time. thank you, madam chair. >> i want to thank our witnesses for being with us today, for staying with us through votes on the floor of the house. you have certainly given us an impetus to work in a bipartisan way to modernize america's electrical grid and expanded clean energy. so, thank you all. without objection, i have a few things to enter in to the record. first, the introduction from the
2:53 pm 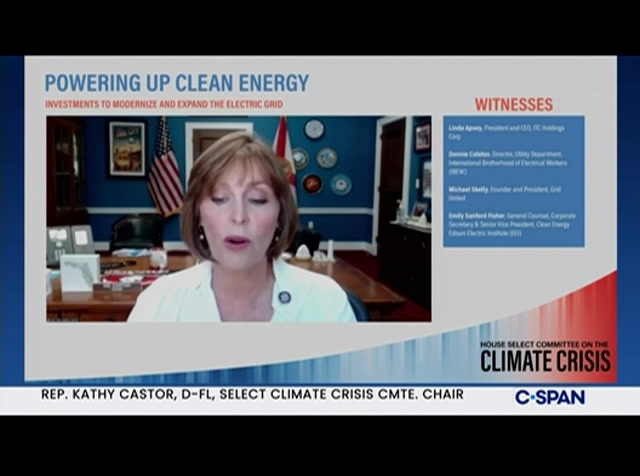 april 20 21 report by america for clean energy grid titled "transmission projects ready to go." the introduction titled "investment tax credits for regionally significant transmission lines." "supporting investments and policies to update and expand the electric grid." and a letter "supporting transmission investments to help achieve 100% clean electricity." without objection, all members will have 10 business days in which to submit additional written questions for the witnesses. i ask our witnesses to respond as quickly as possible. i want to thank our professional staff for a very good, detailed
2:54 pm 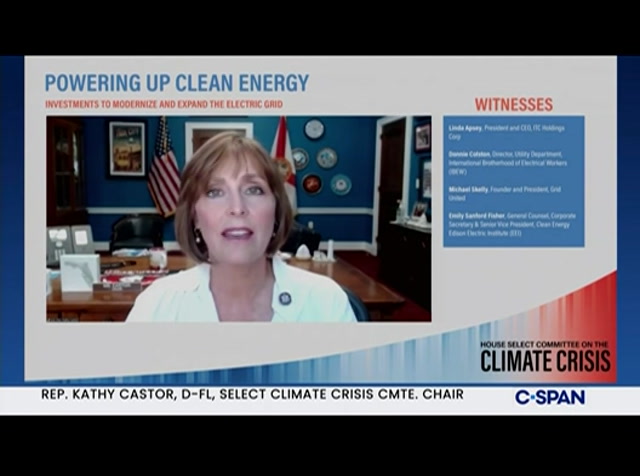 memo for this hearing. it is available online on our website at climatecrisis. health. go --.gov. with that, the >> american history tv on c-span3. exploring the people and events that tell the american story. on the civil war. the project "black virginians and blue" about african-american union soldiers fighting for emancipation tonight at 8:00 p.m. eastern on lectures in history. the university of california
2:55 pm 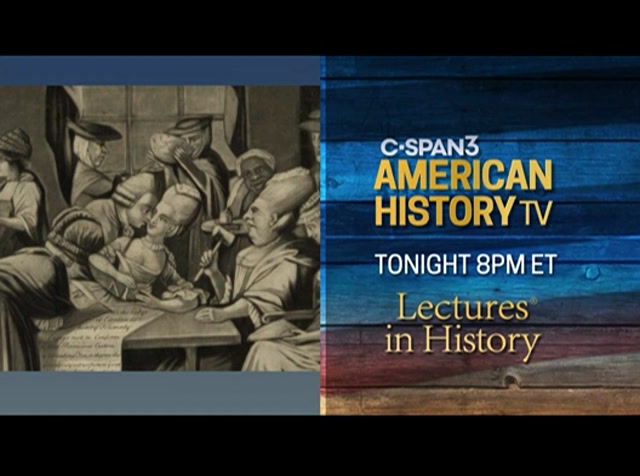 riverside professor on the lives of women during the american revolution and the early republic. sunday on american artifacts, the arrival of the reconstructed friendship, as the 18th century port of yorktown, virginia, designed after the french vessel that brought the major general back to the united states in 1780. exploring the american story. watch american history tv this weekend on c-span3. >> book tv on c-span2 has top nonfiction books and authors every weekend. tonight at 10:00 p.m. eastern, on after words, the former xerox ceo, the first black female ceo of a fortune 500 company, on american business and the corporate world. she is interviewed by the amazon senior vice president. sunday, live at noon eastern on in-depth, join our to hour
2:56 pm 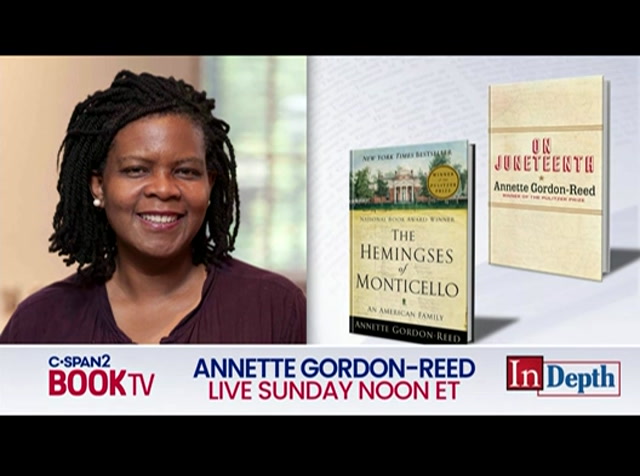 conversation with pulitzer prize-winning author and historian annette gordon reed as she talks about american presidents, slavery, and emancipation. her prize-winning books include the hemmingses of monticello. she will be taking your calls, comments, emails, and tweets. watch book tv on c-span2 this weekend. >> c-span's washington journal, every day we take your calls live in the air in the news of the day and we discussed policy issues that impact you. historians richard norton smith, douglas brinkley, edna greene medford discussed the results of c-span's historian survey of presidential leadership. watch washington journal live at 7:00 eastern sunday morning and be sure to join the discussion.
left
right
Borrow Program
tv

The House Select Climate Crisis Committee continued their hearing on modernizing the nation's electric grid, hearing from experts and energy industry executives' testimony on modernizing the grid, renewable energy, job creation, and how the climate affects demand for power.