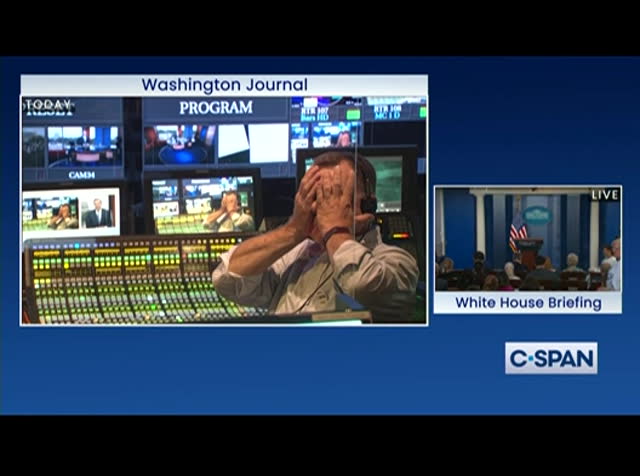 so many other signature shows. we were trying to figure out how many calls he is listen to in the answer is a lot. we will miss his professionalism, his good nature, is one personality and all that he is brought over the years to the c-span network for nearly four decades. on behalf of all of us at c-span, we wish you the best in the next chapter in thank you for helping with the c-span mission on your final program today. >> a live look at the white house briefing room this afternoon where shortly, press secretary jen psaki will hold a briefing with reporters. live coverage gets underway on c-span in just a few minutes. while we wait, your phone calls from this morning's "washington journal,"
1:08 pm 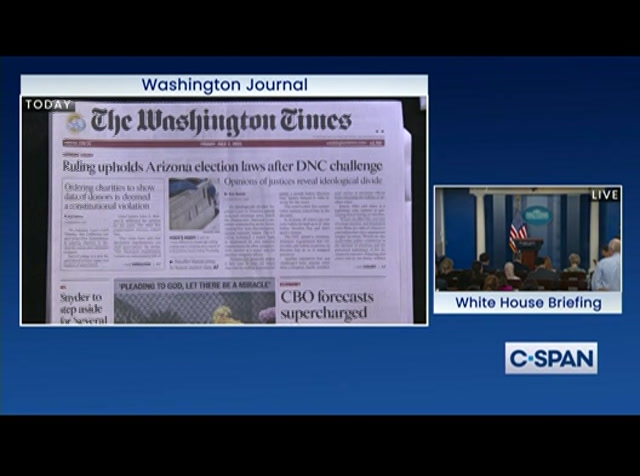 >> president biden paying his respects to the those who lost their loved ones and it's been eight days since the cell tower of the champlain condo collapsed. the front page of the post, prosecutors allege fraud at the longtime chief financial officer of the trump organization. the manhattan da is calling it a payment scheme and tax fraud stop a supreme court ruling upholding the arizona election law after a challenge by the national committee. inside the washington times -- liz cheney said i am honored to have been named to serve in the january 6 select mehdi. congress is obligated to do a phone test -- do a full investigation. those who need to be held accountable in the select committee will fulfill that responsibility in a
1:09 pm 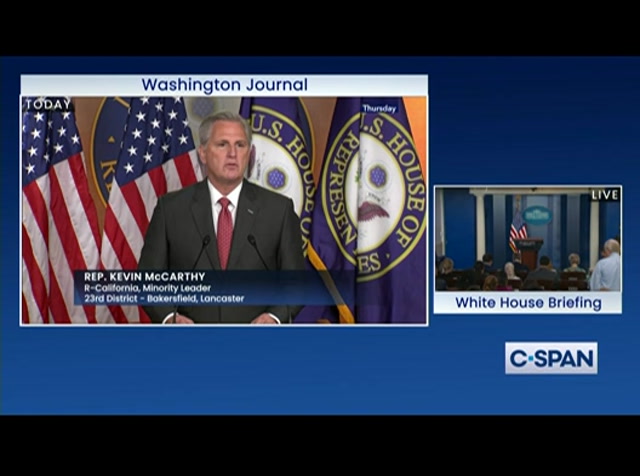 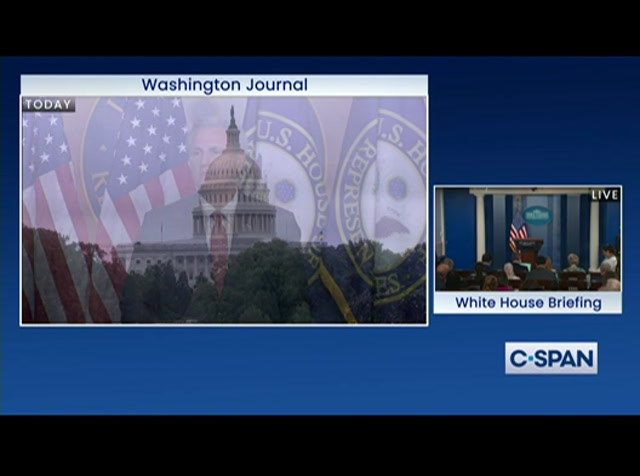 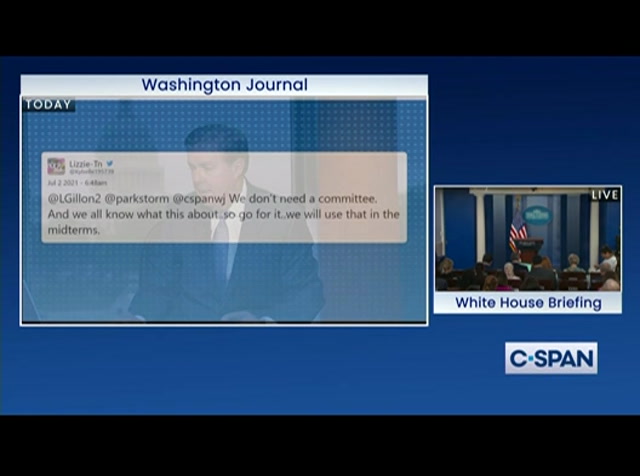 jim jordan, republican of ohio and congressman mike johnson of louisiana, representative kelly armstrong from north dakota, congressman jim banks of indiana, congressman roger davis of illinois or brian style of virginia and elise stefanik from new york. also in indiana representative. those are some of the names being mentioned on this friday morning. this is a tweet saying we don't need a committee and all we know about this so go for it, we will use that in the midterms. this saying that republicans had the chance to create an independent bipartisan commission but they blocked it and that's now looking like a very dumb mistake. duke is joining us on the independent line from stonington, maine, good morning. caller: good morning. i just want to say that i don't know why any decent republican would not want to be on this committee.
1:12 pm 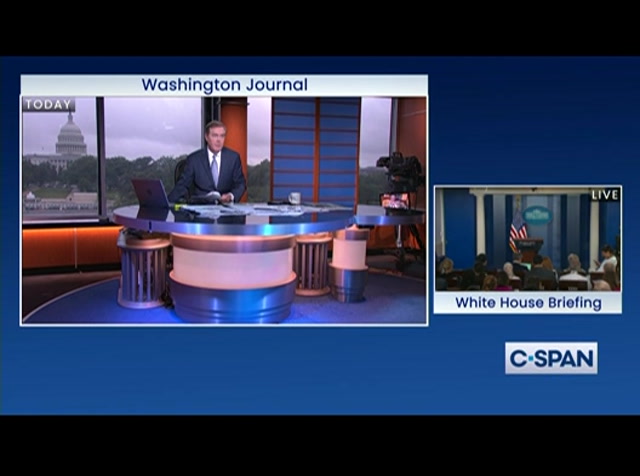 their lives were in jeopardy, too. just watch the film footage. for them to just want to sweep this under the rug like it never happened my don't understand it step as far as i'm concerned, they are dead souls and they have no decency and i just don't understand why they wouldn't want to be part of the process of getting to the bottom of this mess and try to find out just what was going on and hold those people accountable for what they've done. iq. host: nick is next from marina del rey, california, good morning, republican line. caller: it's ironic that liz cheney whose father was a shill for halliburton and lied about weapons of mass distraction and probably did more to hurt this country than anyone else and she runs into the arms of speaker pelosi so she can be used for political purposes for a sham committee.
1:13 pm 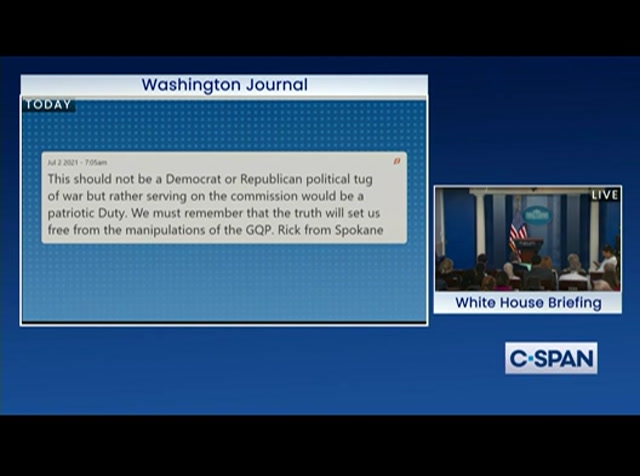 this is typical of the chaney's and typical of the way they operate. mccarthy should be commended for holding party discipline and stripping her of her committee assignment. she wanted the committee assignment from the democratic speaker so she might as well become a democrat. host: this is from rick in spokane, washington. axius.com, the headline is nancy pelosi appoints liz cheney. nancy pelosi announcing that liz cheney of wyoming is one of eight members she selected to serve on the select committee that will investigate the deadly january 6 capital insurrection, why it matters. the former gop chair was ousted
1:14 pm 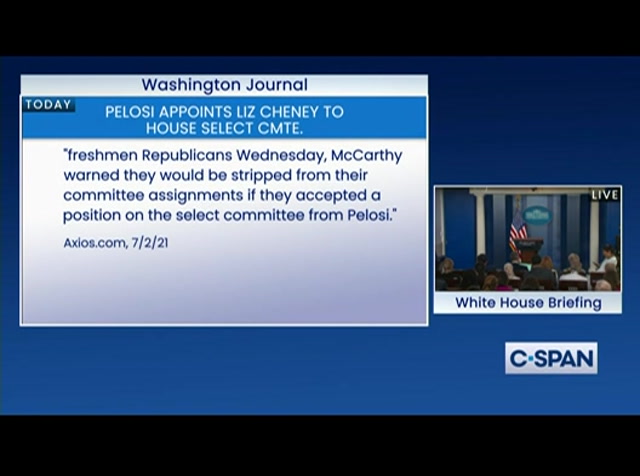 from her committee assignment and is the only republican handpicked by closing to serve on the 13 member committee. they will consolidate several house investigations formed after republicans blocked a bill that would've established a bipartisan 9/11 style commission to probe the attack. the remaining five members will be picked in consultation with the house republican leader kevin mccarthy though he has not yet indicated whether other republicans intend to participate. in a closed-door meeting with freshman republicans wednesday, mccarthy warned they would be stripped from their committee assignments if they accepted a position on that select committee with pelosi. that was from axios.com. we heard from representative mccarthy and we will go to huntsville, alabama on the independent line stuff caller: good morning morning and thanks for having me. mccarthy is saying that it's on president accepted the position on the january 6 committee will
1:15 pm 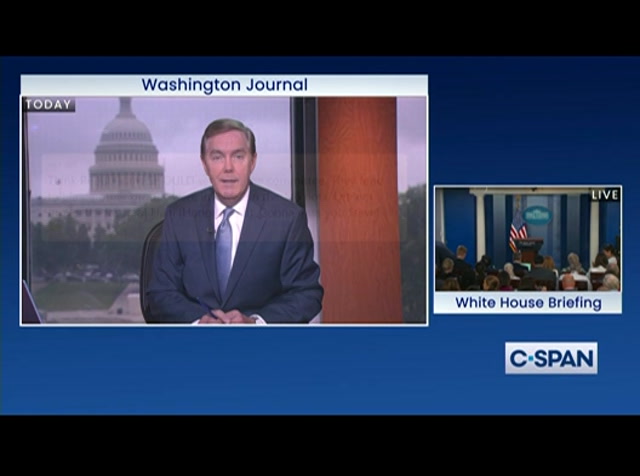 step but i don't know if the republicans just think people can't and callista click. this was also an unprecedented account -- attack on the capital to overturn the election. republican people need to be careful about listening to what they have to say because they are definitely misleading those who are uninformed but for those who are informed, ms. cheney is doing a great job and she said it's an example for all politicians, thank. host: this is from jason in honolulu, hawaii, up early on friday morning we will go to martha joining us next from austin, texas on the democrats line. caller: it's marsha. host: i'm sorry. caller: that's ok, they want to find out the truth, they should have -- they should serve on the committee. if mccarthy does not want to find out the truth -- he
1:16 pm 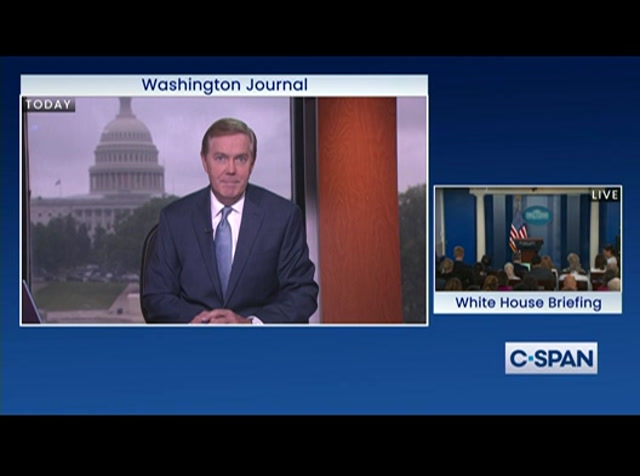 obviously does not want to find out the truth. they want to spread rumors but they don't want to find out the truth and that's what people need to be aware of. thank you so much. host: jim is next from franklin, pennsylvania, republican line. caller: good morning. i remember you from erie news. host:host: it's been a long time but thank you. caller: that's correct. i think the republicans should serve on it, why not? i think there should be equal representation on the committee and i think they should be appointed by mccarthy, not nancy pelosi. here is a novel idea to understand what happened that day. have the government >> we will leave this "washington journal" segment and take you live to the white house brie
left
right
Borrow Program
tv