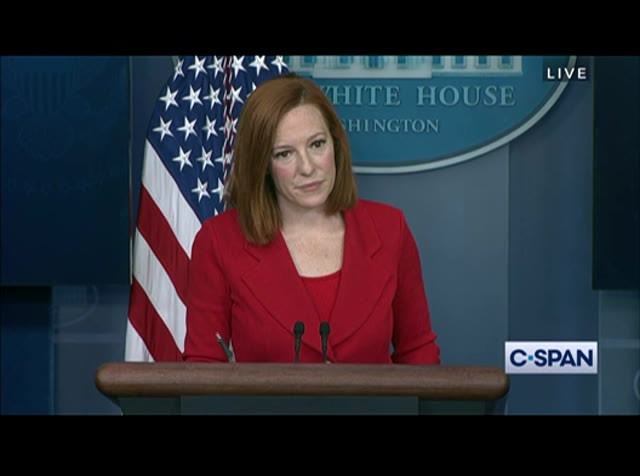 them, we will share the details with all of you. reporter: very quickly on immigration. with regard to the militarization of the border in central america, did the white house, is the white house concerned given the record number of children that have been making this track that they are at greater risk given that these are soldiers and not daycare workers? jen: the goal is to deter the journey. that's why discussions with these countries involve increasing law enforcement at the border. those are your words -- not mine. we work to increase law enforcement at the border to deter the travel, which is a treacherous journey. thank you so much. i don't have anything to preview
12:57 pm 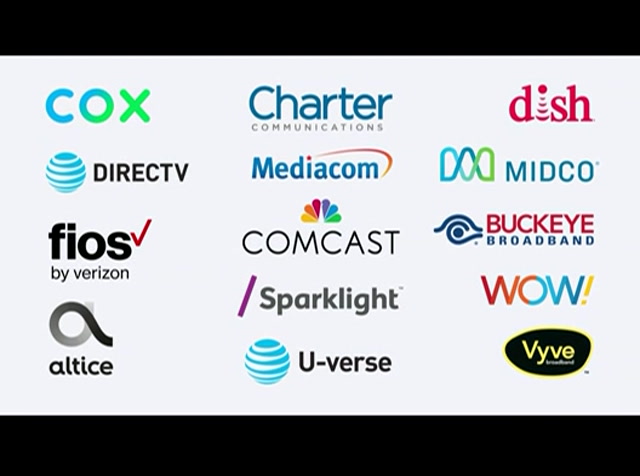 for you on the timeline. thanks, everyone. [captioning performed by the national captioning institute, which is responsible for its caption content and accuracy. visit ncicap.org] >> c-span is your unfiltered view of government. created by america's cable companies in 1979. today, we are brought to buy these television companies who provide c-span2 viewers as a public service. >> coming up at 1:00 eastern, we will have live coverage of the discussion on supply chain vulnerability hosted by woodrow wilson center. house republican conference chair, liz cheney, discusses the future of the republican party in the conservative movement. she will be speaking at the georgetown interview --
12:58 pm 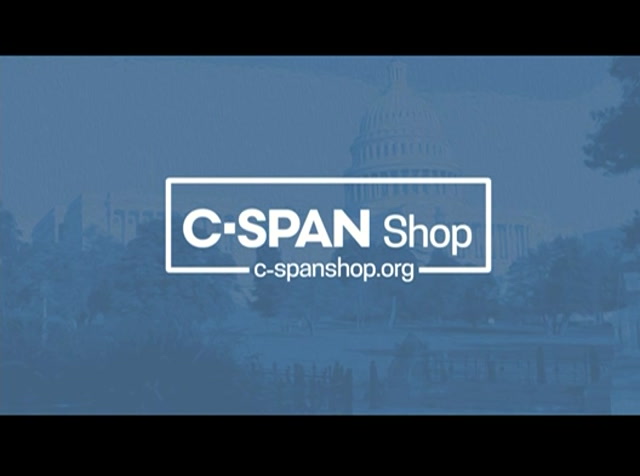 georgetown university institute of politics. you can listen live on the c-span radio app. c-span shop.org is c-span's new online store. go there to order copies of the congressional directory, a compact, spiral-bound book with contact information for every member of congress, including bios and committee assignment and contact ed minutes -- contact information for governors and the biden administration cabinet. joining us from atlanta is greg bluestein, he covers politics for the atlanta journal constitution. thank you for being on c-span. guest: thank you for having me. host: let's talk about the new voting law signed by governor kemp. it would remove election board, shorten the time to
12:59 pm 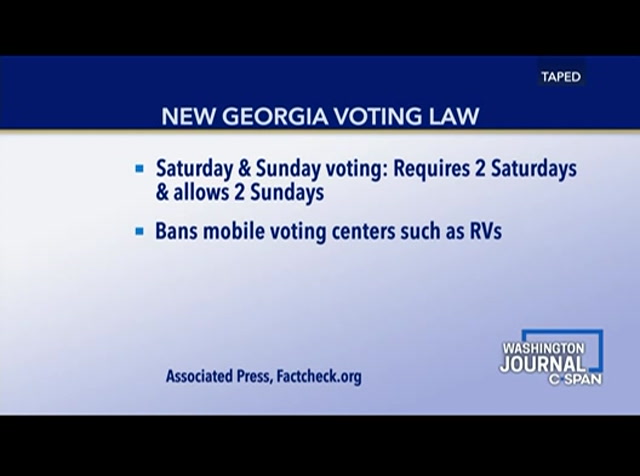 request absentee ballots, requiring voter ids for all mail-in ballots, ban food and water distribution within 25 feet of voters, although you are allowed to bring your own as you wait in line. one drop per county, 23 in the more populous counties. it reduces the number of days allowed for absentee voting from 180 to 78. it also bans mobile voting centers such as rv's. why was this law put in place? guest: that is the question lawmakers and politicians and voters are grappling with right now in georgia because of the sharp fallout of this package of legislation. republicans say these are needed changes to restore the integrity and confidence in the vote in georgia, and that some of the changes were spurred from the 2018 election in georgia, needed
1:00 pm 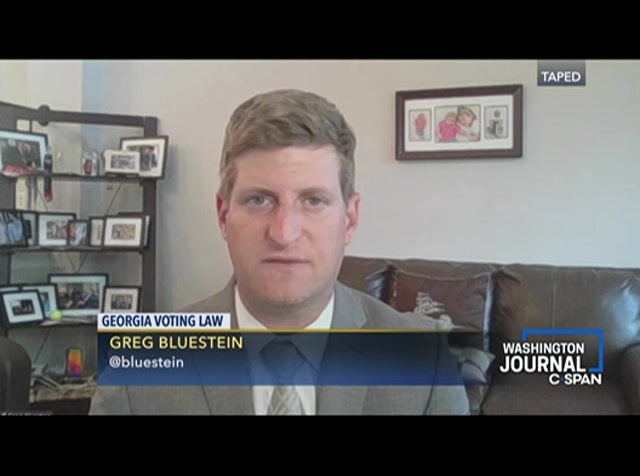 political will to be passed. what democrats eagerly point out is that crisis of confidence was rooted in president donald trump's falsehoods about election fraud in georgia and other battleground states, and that that is what prompted this crisis of confidence. there are some changes that are contingency driven but a lot of these changes are not, and amounts to more obstacles to vote for people who in the last election cycle embraced absentee voting, some of the newer technologies, methods to vote like ballot drop boxes, which will be severely limited under this new law. host: that led major league baseball to pull the all-star game from atlanta, now taking place at coors field in denver, colorado. pressure from companies based
1:01 pm

in georgia like delta and coca-cola. can you explain? guest: as the pressure mounted from activists, voting rights activists from democrats and other critics of the law, pressure focused on george's major corporations to speak out against these changes. in other states, too, but in georgia, business groups play an outsized role in civic debates. in the last few years, coca-cola, all of these atlanta-based fortune 500 companies have had a seat at the table for major decisions not only involving their bottom line but infrastructure, reputational programs, religious liberty debate, tax hikes, all of those things they have played a seminal role. now you have activists saying voting rights is a fundamental issue for american democracy.
1:02 pm 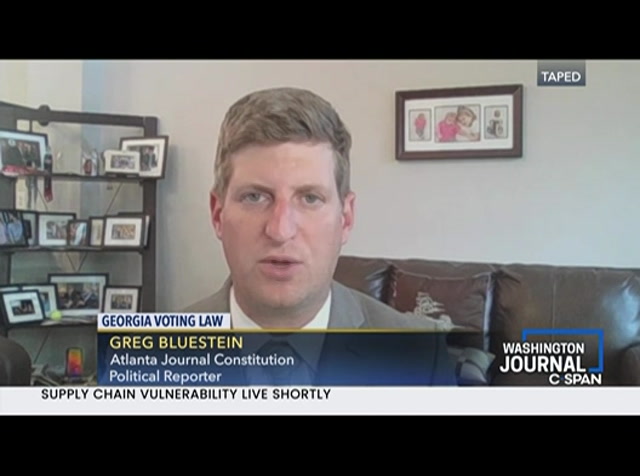 where are you on this debate? many of them sidestepped it, many of them still are, mild statements about how they support fairness and integrity at the ballot box. but one week after governor kemp signed this action into law, delta and coca-cola, two of the city's namebrand corporate firms, both come out on the same day with very staunch statements about these restrictions, which led of course to very staunch push back from governor kemp and other republicans saying they don't believe this allows to restricting voting rights, but secondly, where were you earlier on when you had the chance to speak out against this? there are dueling calls for boy boycotts. of course, that led major league
1:03 pm 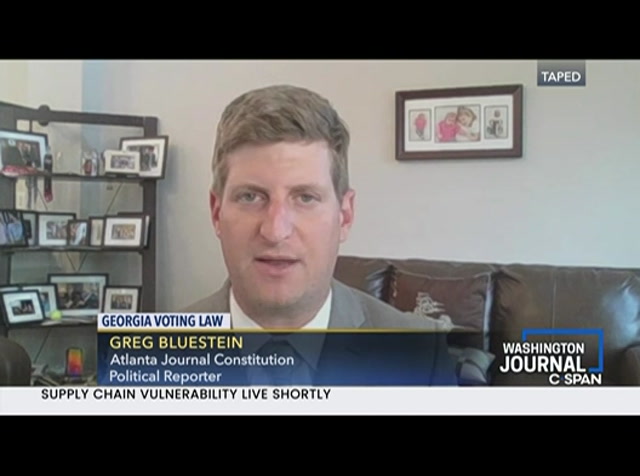 baseball to move the all-star game. a big blow to the local economy there. it became a rallying cry for republicans around this election law, particularly around governor ryan kemp, who is facing a tough election battle next year. host: we have our phone set aside if you are a georgia resident, (202) 748-8003. taking a closer look at what is in the new georgia election law. lines divided up between democrats, republicans, and independents. you can also join us online. the secretary of state, brad raffensperger, who became the center of controversy with former president trump critical of announcer: the entire washington journal is available online. we take you now to a discussion on supply chain vulnerabilities. rep. cheney: it is a living
left
right
Borrow Program
tv