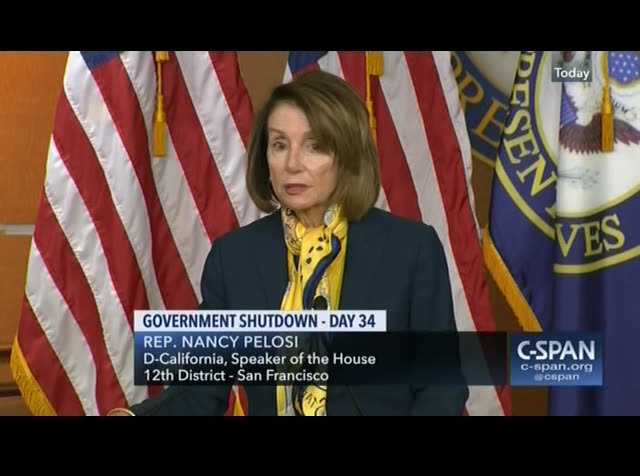 provides for us in so many ways because theydown don't understand why people have to stand in food lines. thank you. >> house republican leaders accuse democrats of being unwilling to negotiate an end to the government shutdown. they also talked about the efforts to get federal workers paid as the shutdown continues. >>.
9:04 pm

hello, everybody. we are still in the shutdown. it is unreasonable for them to not come to the table. i really hope that the democrats will recognize soon the damage that speaker pelosi is doing to their party, that she is doing to this institution, that she is doing to the house of representatives and to the united states by absolutely negotiate, by doing something nobody has ever done before, canceling the state of the union appearance by the president. i think it is time for the democrat of -- democratic party to have an intervention of the speaker and do what is right for their party and this institution. we hope they will come to the table. we have not seen any. indication that they are reasonable at this point. that's bad for the nation above all. as the so done continues, we
9:05 pm 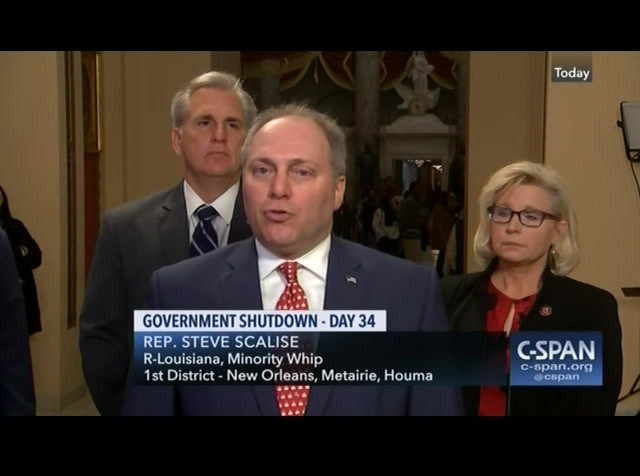 have been committed to make sure all of our federal workers get paid. we brought another bill to the floor today that would have paid all federal workers. last week, we had six democrats and every republican voted to pay the workers that are working or furloughed during the shutdown. we had six democrats to vote for that. and today, 13 democrats voted for that. you are starting to break from their party leaders. all we need is eight more democrats to pay our federal workers and everybody can get paid even as we negotiate our differences on border security. if anybody watched the colloquy today, first you heard the majority leader not put one offer on the table. you also heard from the majority leader say that they are not going to talk during this impasse. how do you solve this when the president of the united states continues to put offers on the table to solve this problem, to reopen government and secure our
9:06 pm 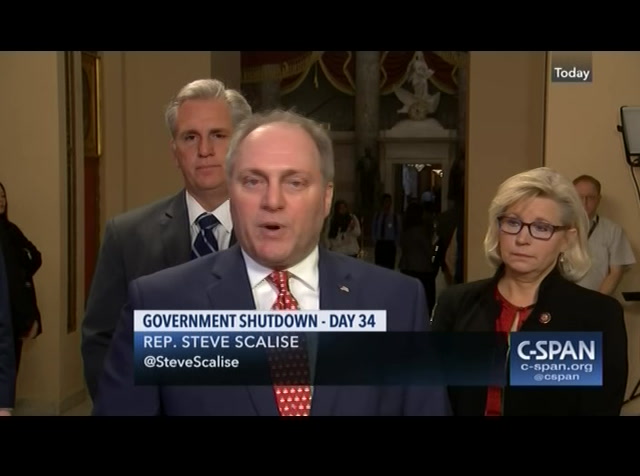 border and the democrats' response is they are not going to talk. that is unacceptable. it is unacceptable that the speaker of the house wants to hold the state of the union hostage because she doesn't want the american people to hear about the needs of border security. we talk about border security but talk is in cheap until you put money in place. that number is $5.7 billion. they are not willing to support that request. what number are they willing to support to keep this country safe? so far have yet to put a single offer on the table. and the response is they are not going to talk. that is not acceptable and time for them to sit down and talk with the president and solve this crisis. >> this is a place where talk happens but actions.
9:07 pm 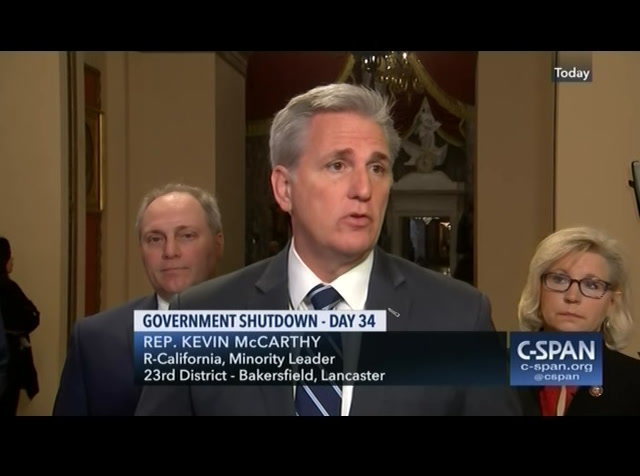 but to have members go home when federal workers are going to go to a second paycheck that they do not receive. on the floor this week, the republicans proposed paying all the federal employees. only 13 democrats have joined with us. the president has proposed something that is very reasonable. for border security, but also dealing with daca. is daca important? i believe it is. the speaker of the house last year, nancy pelosi, she holds the record for the longest speech ever given on this house floor. it was over daca that she was shutting the government down for. the idea that you can take both challenges that are out there, find an opportunity to solve this and put the american public first. but what is the answer?
9:08 pm 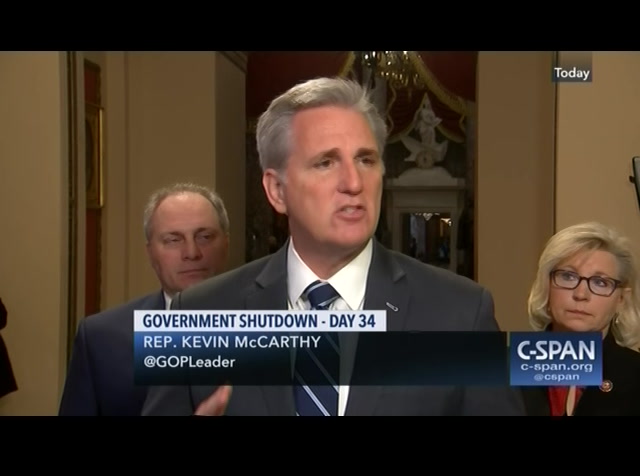 note to paying the federal employees. and second, to close early and go home. i'm staying this weekend. i'm requesting that the leaders get together tomorrow, all of us, stay in the room until we solve this problem. the president is right. it only takes 45 minutes. the president is right that he found two issues out there that both parties care about. he is correct that our government is designed to find common ground and not one person can always have their way. unfortunately, i think the speaker thinks differently. there was a low point in history for the speaker of the house to uninvite the president of the united states. it's a low point that we are still shut down. even lower that people would go home and not solve this problem. i listened to the majority
9:09 pm 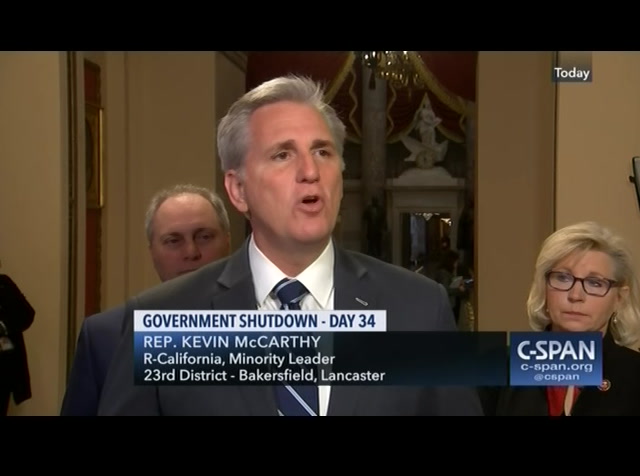 leader today. he did not list one bill outside of suspension that they would bring up next week. how can that be a majority party? how can the majority party refuse to communicate, refuse to willingly sit in the room. i'm requesting that we get in the room tomorrow and make a commitment to one another that we stay in that room until we solve the problem, because i believe that we can solve it rather quickly. i will work with anyone who wants to put america first, who wants to solve this problem and make sure we open up this federal government and pay our federal workers and secure this border. i will vote for daca. one person can't have what they want. it's a concern on all sides and i'm willing to make it work. i will take any questions. house republicans
9:10 pm 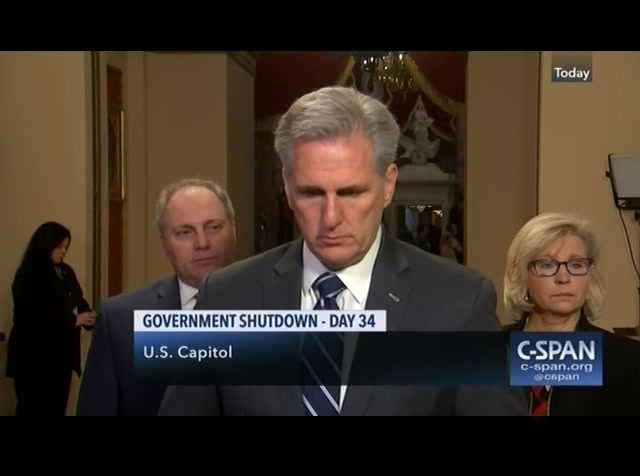 laster have a lot of opportunities. said look, there is a debt ceiling, c.r. and worried about the wall. you had two years to make this happen and repeatedly, you chose not to in favor of other things and only now you are putting up this fight. >> i disagree with the premise. we did put up a fight. look what we put up. unfortunately, in this house, the rules and the senate are different. it takes 60 votes. it wasn't us denying them but the democrats on the senate side. they said no. it's the same action that is taken today, when leader schumer decided to shut the government down after we passed a bill to pass the house, that's the challenge. when you look today, jobless claims, 49-year low. we made sure a tax bill went through. not one democrat voted for that.
9:11 pm 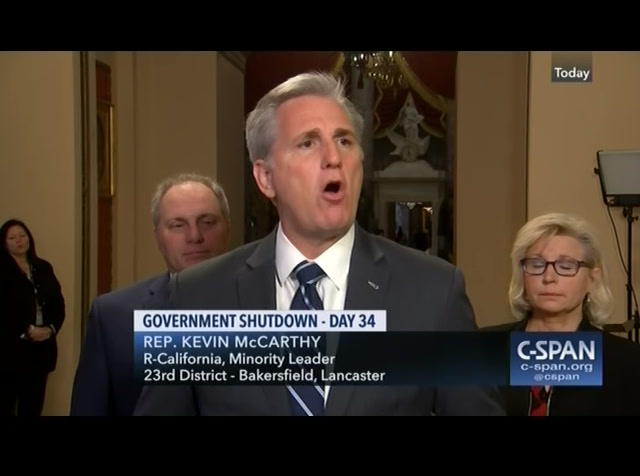 they said it would be armageddon. it's armageddon because we are at a 40-year low in jobless claims. 800,000 federal workers are not being paid and telling members to go home. that's a problem. >> do you think the country is less safe now when it comes to air travel or other services that are not being provided. should the american people be uneasy going to the airport. >> leave it to the experts to say that. my travel has been very safe and i have seen it throughout. i know we have professionals working. but that's the challenge right now. why would you send people home? why would the democrats not to pay for those individuals who are working? because we had that on the floor. i will give credit to the 13 democrats they will vote to pay for those individuals. why would that same leadership voted no, why would they tell us
9:12 pm 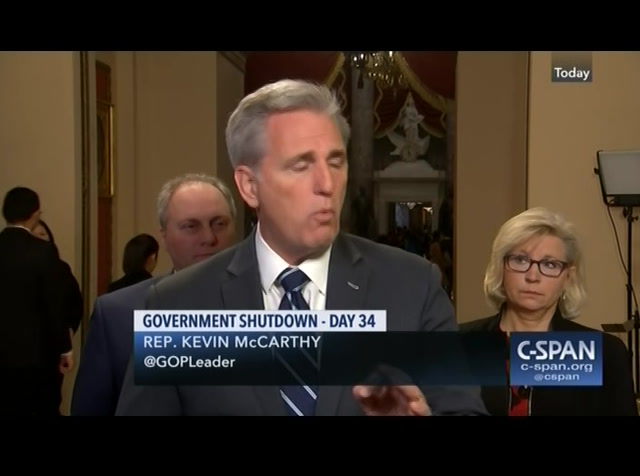 to go home and solve the problem? >> you feel it's time to end this standoff now. what is democrats saying we are -- what is your formula for dealing with the threshold problem, which is democrats saying we are not going to negotiate until you reopen the government >> -- government. >> that is irrational. >> i want the wall money. >> he said i'll open up the government in 30 days and she said no, not one dollar. that is irrational. think for one moment that they voted tore border security and voted for a wall and now they want to say no in the process. that to me is wrong. it is wrong for sending people home. we should be here. >> do you have any concerns of
9:13 pm 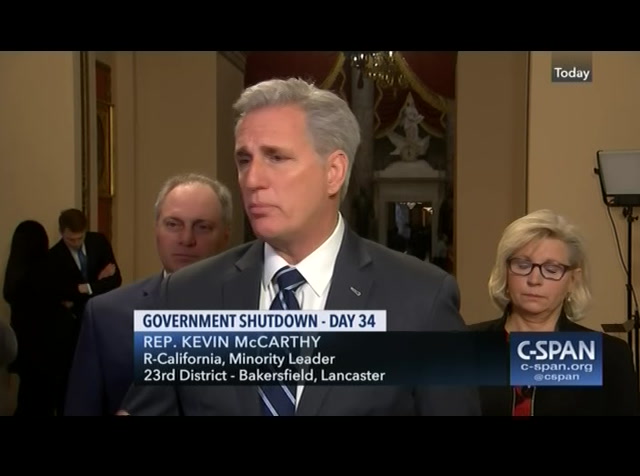 the president going after michael cohen's family and the threats and canceled his testimony. does that concern you at all? first, again, i disagree with your premise, you are saying that cohen that he is going to going to jail. i know cohen to be a liar. i don't agree with your premise. >> how about concerns for his father-in-law. >> on the shutdown, if democrats offer $5.7 billion and does president include money for money for the wall, is that a nonstarter? >> i don't think anybody in america believes in can have border security without some form of barrier. that is coming from speaker pelosi. why don't we listen to some of her members and one of her chairs. the agriculture chairman, colin
9:14 pm 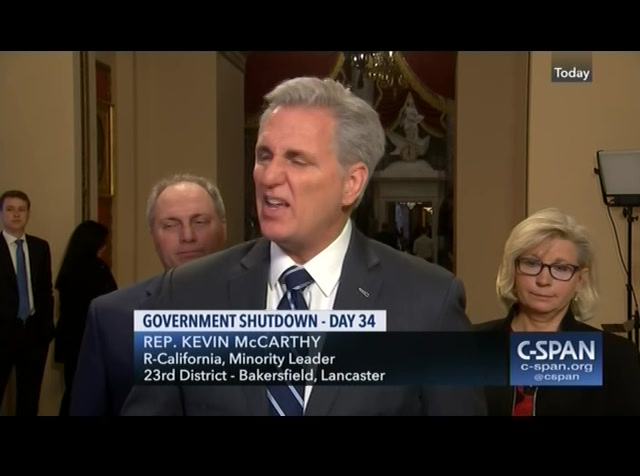 peterson, he said give trump the money, or the armed services chairman, he said the wall works. the majority leader said walls actually work. we find the facts from san diego to yuma and americans understand you have to have some barrier to have border security. all of a sudden they are saying no. and while they are saying no, it is harming 800,000 americans. and again, if they truly pleeved that, end it. and let's see those actions. >> secretary ross was on television said he didn't understand why federal workers were going to food banks. does this administration not understand the impact this is having on federal workers and what is your reaction? >> i did not see that.
9:15 pm 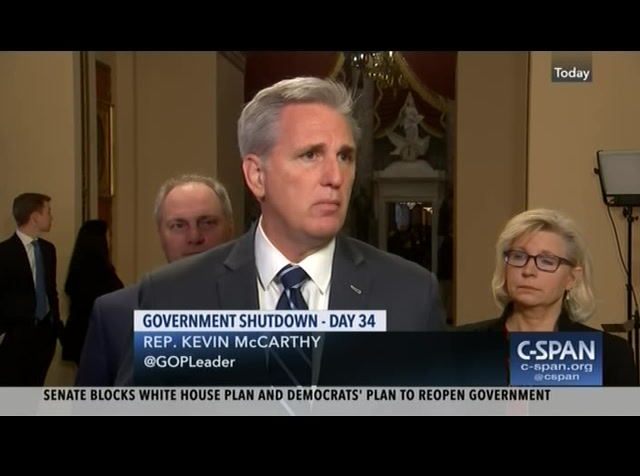 this is having a real impact. many of these individuals do not make a great deal amount of money. they live paycheck to paycheck. and i'm staying here and i want every leader to be here in the room. we will not come out until we solve this problem. they are being harmed and at the same time, they are continuing to work. and that's why on this floor, what do the republicans do? they said pay them. and we put it on the floor. all it took was a few more dem -- democrats. they would be getting paid. they chose not to stay and solve the problem. the question about the $5.7 million, why are you using barrier instead of wall. >> i watched having been from
9:16 pm 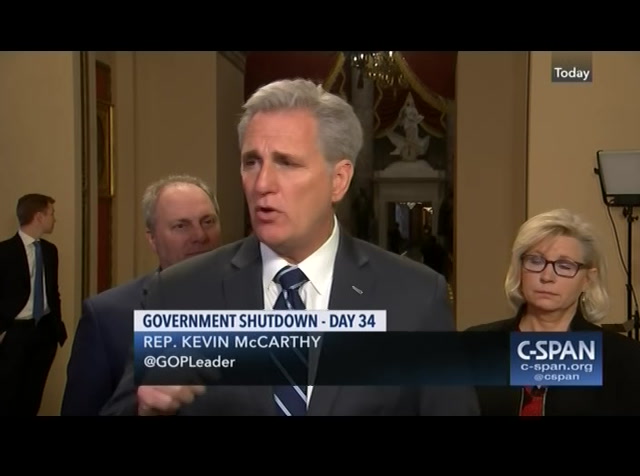 california going to el paso, yp best being along the border, if you have been to the border, if you went to the border you would walk away and notice there is common ground and i need a wall, and a barrier and why do i watch this president doing the meeting. i watched him give 4 different offers. i never heard one from the speaker. i never heard one from the speaker. i heard the speaker say, we went forward with that. i heard the speaker say she wants the body to be a town hall where people can see and watch. even though that same day she used those word, she invited the president to come. woodrow wilson was the first in 1913 to give the state of the union before
9:17 pm 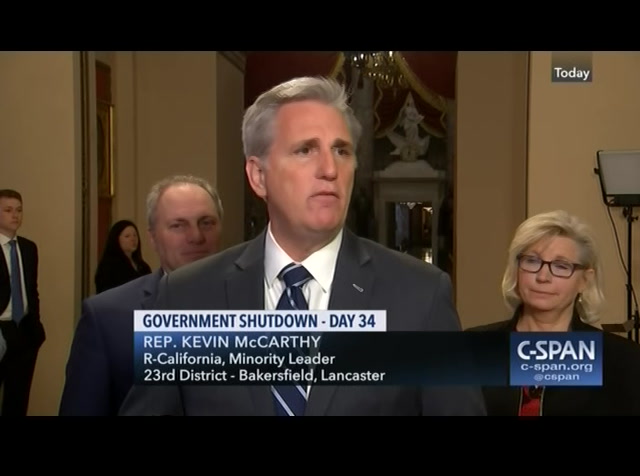 congress. 83 other times. 1934, there has never been a state of the union past february 2. this speaker has a new history. one, first of this invite. two, she closes the house down during a shutdown and votes against allowing payments to the federal workers. to me, that's all wrong. let's change course and get back in the room tomorrow. i don't know if she has a codel or other plans. why don't we make the commitment that we will not leave the room because i know we can't find -- we can find common ground. thank you. >> president trump held a meeting with lawmakers at the white house and talked about a potential agreement to end the shutdownt
left
right
Borrow Program
tv

House Republican Leaders held a news conference to talk about the government shutdown.