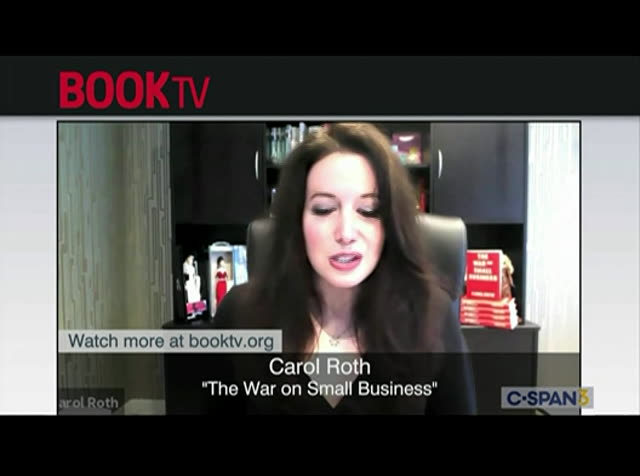 >> raising curious well educated children outside of the conventional classroom and it is written by carrie mcdonald, ms. mcdonnell before we get into the substance of the book tell us a little bit about yourself. >> it is great to be with you i am a senior education fellow at the foundation for economic education celebrating our 76 year anniversary this year as
3:16 am 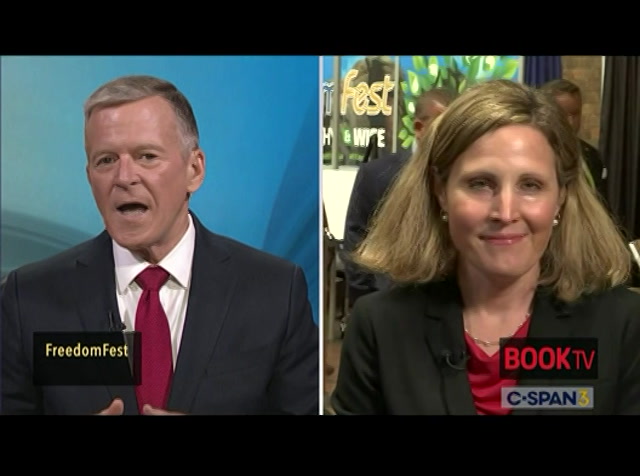 the oldest free-market think chain and a scholar at the cato institute of the freelance writer and as you mentioned the author of untold which came on 2019 the spring of 2019 that had a quite a bit of renewed interest over the past year plus given full shutdowns in the upsurge in interest in homeschooling and alternatives to school for tickly with school shutdown and delayed reopening plans. >> on the practical level have you been in the preschool level or the school-age? >> i am a homeschooling mom myself i have four children who have never been in school who range from 7 - 14 and high-end personal experience and reflection but i travel the country in writing the book and i visit other homeschooling families as well as learning
3:17 am 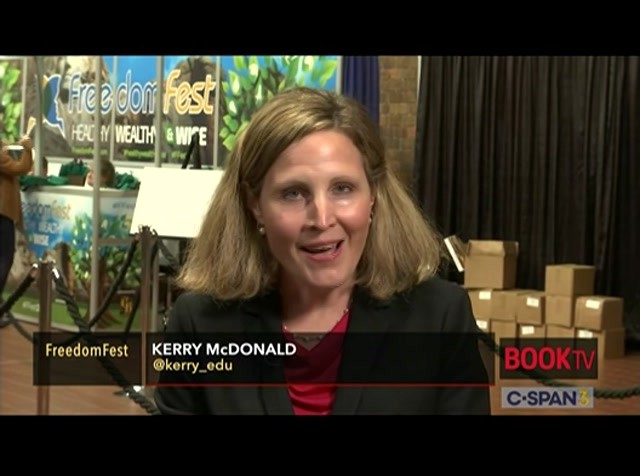 centers and other alternatives that are really catered to families looking for something different customize for their children education outside of the traditional and school environment my undergraduate degree is in economics and i went to graduate school and education policy at harvard and that was where i became interested in education choice and freedom and alternatives to school and education entrepreneurship and entrepreneurs coming up with new learning models at the educated level and new ways to meet the demand that parents have for something different for the kids. >> you say your children have been homeschooled but have they have been unschooled is very different. >> the difference is homeschooling are both alternative to school outside of the conventional classroom but
3:18 am 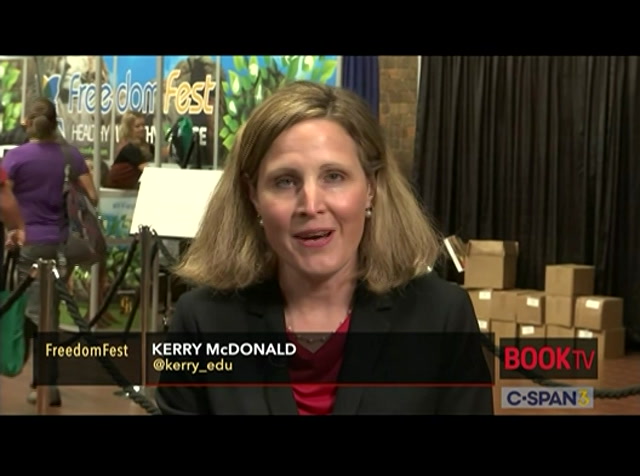 it's really focused on self-directed education, if we think about distancing an education from schooling including homeschooling one of a stereo typical version of homeschooling where you might have a parent sitting around the kitchen table with textbooks and replicating school at home i challenge that a little bit in this book and suggest you don't need to replicate school at home even in homeschooling models that you can encourage children's natural curiosity and creativity and as a parent connect his interest and captions that your kids naturally have two available community resources of places and things around us. >> how do you get to the basics of teaching math and reading literacy to children in an unschooled environment?
3:19 am 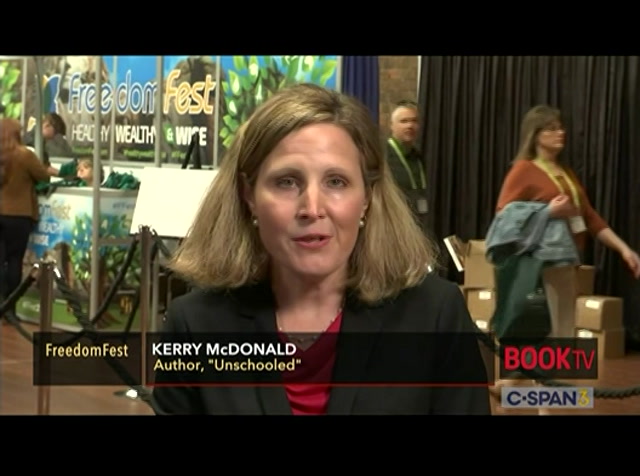 >> i make the point very clearly in the book that is ever parents responsibility to make sure that their children are highly educated and i would argue that is true whether your children are in school or not in school and parents need to make sure that the children are actually learning and being educated and with him schooling because there is so much more family involvement because parents are tuned in to their weaknesses and areas of interest is easier to connect the resources and build upon the knowledge of children have and their curiosity, i do go through the book talking about how to approach reading and math and i think it's important to mention they are not anti-curriculum or the traditional learning, since the idea it is self-directed and
3:20 am 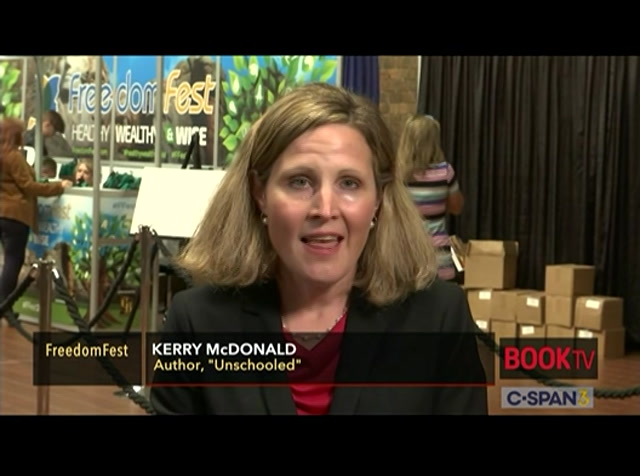 student directed as opposed the top down, many children will gravitate to a curriculum for some subject or all subjects many homeschoolers and up takingcommunity college classese high school years, survey done on homeschoolers by doctor peter gray who is a psychology professor and on schooling advocate in my book, he and his colleagues discovered that homeschoolers did spend time during the high school years taking community college classes in getting a degree at the same age that their peers would get a high school diploma and then being able to enroll in a four-year university transfer and save quite a bit of money it's really practical approach particularly now with skyrocketing tuition rates at universities. >> it seems that the homeschool in the unschooled movement have
3:21 am 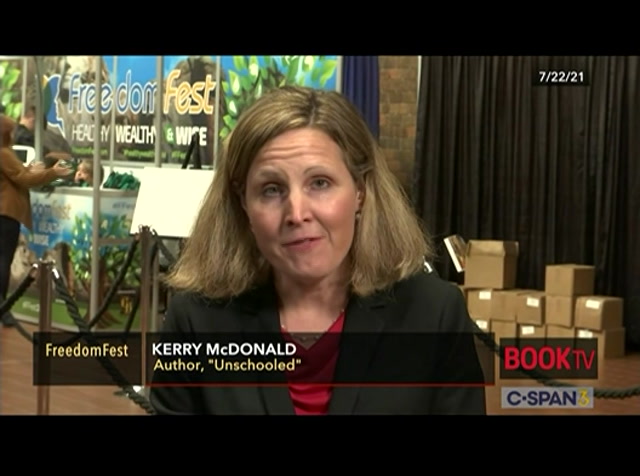 grown exponentially in the last 20 years is that saying something about public education? >> it has grown tremendously over the past couple of decades, the first year the u.s. department of education begin tracking homeschoolers was 1998 at the time they counted 850,000 that number to 2 million, just under 2 million in 2016 and over the past year when the school shutdown since up again underpinned them a week in a march 2020 we seen a tripling of the homeschooling from the pre-pandemic level so the u.s. census bureau released a report in february finding that more than 11% of the overall k-12 school-age population is been homeschooled over 5 million students and it's a tremendous growth, one of the things that the u.s. census bureau found in
3:22 am 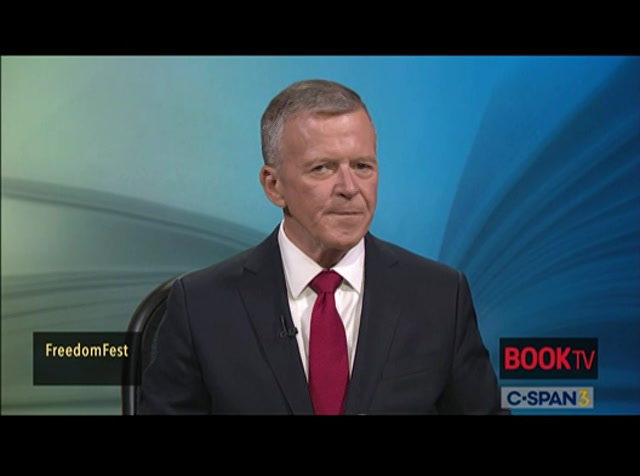 particular, growth is being driven in large part by homeschool families it was a fivefold increase from march 2020 through the school year that ended a black homeschooling families, and overrepresentation more than 16% of the overall population identified as black compared to 15% of black students in the general public school population. >> is that sending a message about public schools? >> i think for this year for sure parents were frustrated about delayed school reopening resume district schooling was not meeting the needs of many students and parents felt like they could do things better for tickly once they got an app on one's they were learning in the
3:23 am 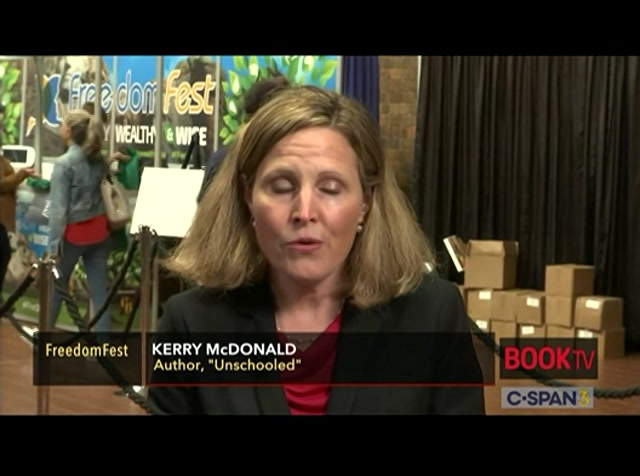 classrooms and remote school beginning last spring i think part of it is that in the overall growth in homeschooling over the past couple of decades has been really more of a desire to provide a personalized customize education in the u.s. department of education data through 2012 and 2016 shows the number one reason that parents are choosing to homeschool as a concern about the environment of other schools including bullying, negative. pressure and that sort of thing in the number two reason and number two motivator was a desire for academic excellence that is a reflection on the conventional school system but really a sense of parenting the empowering to help guide their children's education and learning and give them aroma bust education. >> you use the term coercive schooling, what does that mean. >> course of schooling is an
3:24 am 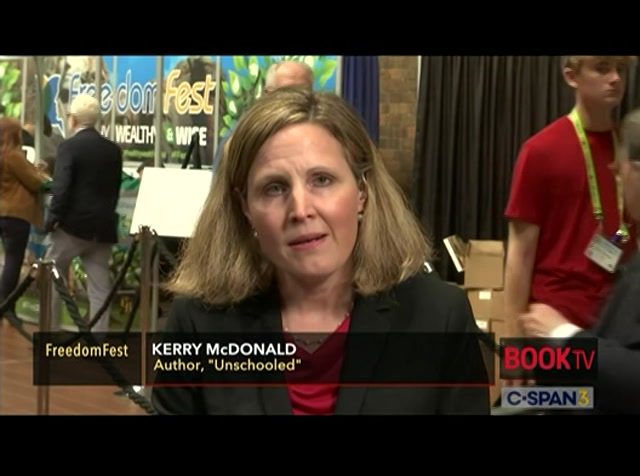 idea that we are compelling students to be in schools through schooling laws as through the coercive measures lockdown majors and you will learn that the subject at this time in this way with very little customization and a doubles down on the standardization of learning over the past couple of decades beginning with no child left behind act in 2001 which i get into in the unschooled book that has accelerated over the past couple of decades the new york times came out with an in-depth article on homeschooling several years ago and they found some of the biggest homeschooling families is happening in urban families who were practically turned off by the lowering standardization of schooling and curriculum scream work in a push for academic standards of every younger age and kindergartners
3:25 am 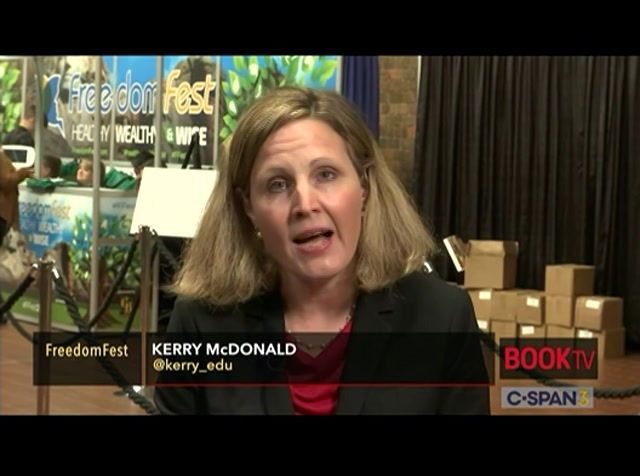 to be reading and all of that the turned off a lot of parents. this idea of injecting education with more freedom and consent over coercion in conformity's. >> what's been the role of technology in furthering unschooled in homeschooled children. >> now there is so many online resources for homeschoolers incrementally school children with being the reliance on technology over the past year i think it is been bumpy at the district level in public schools that have tried to implement remote learning in many cases there are incredible online learnings that homeschoolers continue to rely on another families were able to discover over the past year and thinking of like the academy the nonprofit organization that is
3:26 am 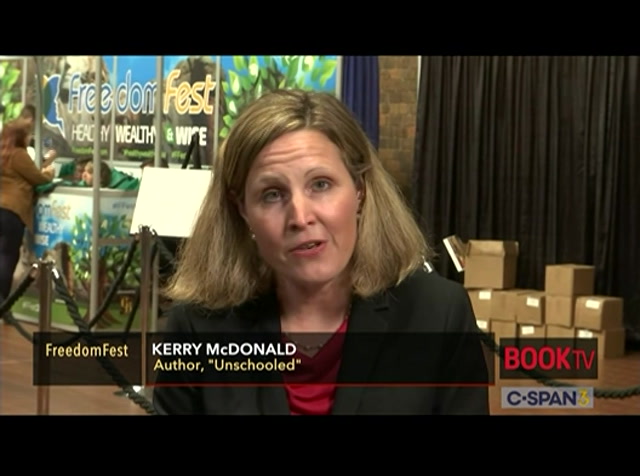 the leader in online free videos known for their math curriculum and a lot of homeschoolers have used them for years and more families have discovered them this year end per infiltration of high quality online learning resources that make homeschooling in these other schooling alternatives more accessible to more families. >> you touched on this a little bit earlier and you talked about natural learning can you expand on that little bit. >> the idea young children are naturally curious, exuberant, creative there always asking why and really geared to discover their world and as i mentioned peter gray as he has so eloquently these natural drives for learning and discovery don't massively turn themselves off when a child turns five or six years old we turned them off
3:27 am 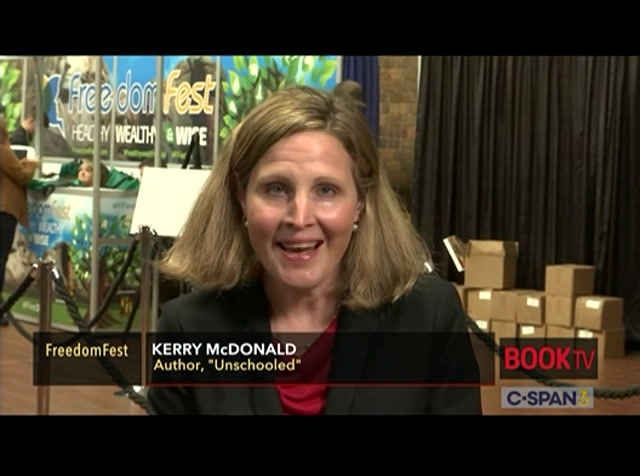 with our system of schooling, the idea with him schooling and separating education from schooling thinking about schooling as one education but certainly not the only one and arguably not the best but the reality of the 21st century the idea is to not shut off those natural drives for learning discovery creativity and curiosity and instead allow those drives to flourish when we think about the needs of the 21st century where we are increasingly competing and coexisting with robots and machines what is it that distinguishes human intelligence from artificial intelligence and it is things like creativity, curiosity, personality, ingenuity and entrepreneurial spirit and so often those are the qualities that diminish and
3:28 am 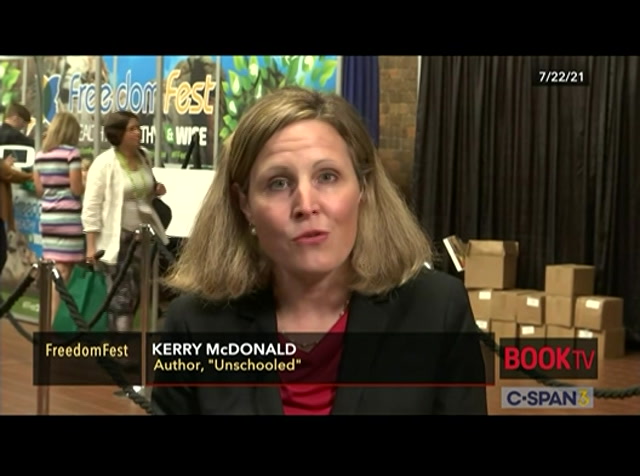 we trade originality for obedience in schools we create activities and inform eddies in schools and that only shut off the natural human drive for discovery and learning that are so critical now more than ever. >> what is the downside to homeschool to an schooling. >> it is through upside this is really the moment that families are discovering and not meeting their means and they have not met them over the past year end now more than ever they're looking for alternatives for school choice over the past year parents it back in the driver side, they are being empowered to take the reins of their children's education and speak other options, there are so many education entrepreneurs online learning programs community resources that are there to step in and support these families.
3:29 am 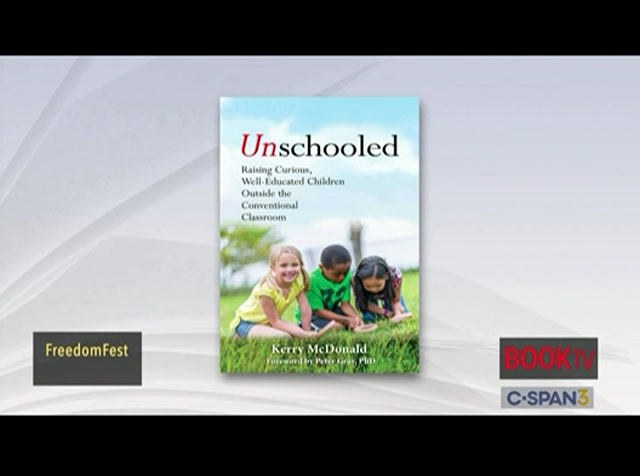 >> carrie mcdonald is the author of this book unschooled raising curious well educated children outside of the conventional classroom thank you for joining us on the
3:30 am 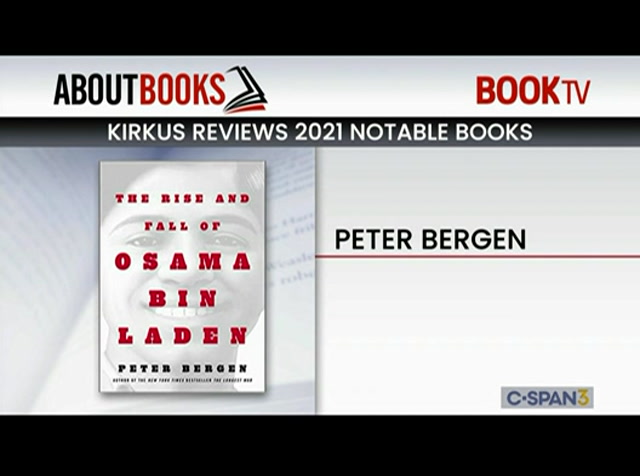 programs anytime a booktv.org. >> it's an honor to welcome everybody to the 72nd national book award. i'm coming in life from the random house building. shout out, they have wi-fi that won't quit. . .
left
right
Borrow Program
tv

Education policy writer Kerry McDonald discusses why she favors a non-traditional form of schooling that helps children learn by enhancing their inherent curiosity.