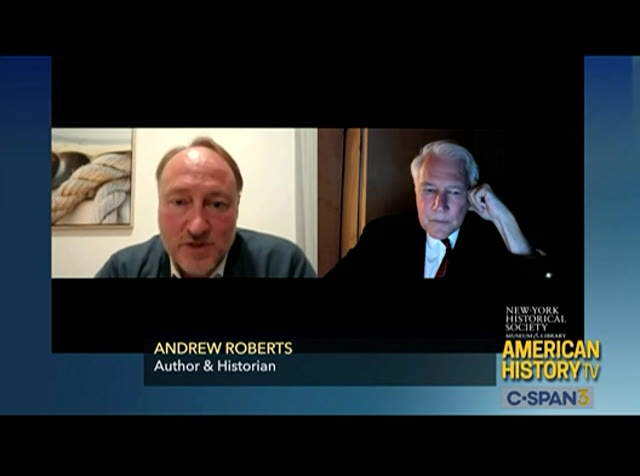 the side of the boat and pretty much whatever you bring up will be worthwhile. there are very few people in history like that. if we get over this present sort of obsession, it strikes me, with everyone's clay feet, of course he was human. he's bound to have clay feet. but if you look also at the actual, you know, bronze statue, i think that's much more worthwhile. >> andrew, i don't know what naughty thoughts you're thinking. you're thinking of churchill's remark about the greek prime minister -- thank you for joining us to listen to this has been a real treasure. i'm so grateful to be able to participate with you before the society, and i give thanks from
12:40 pm 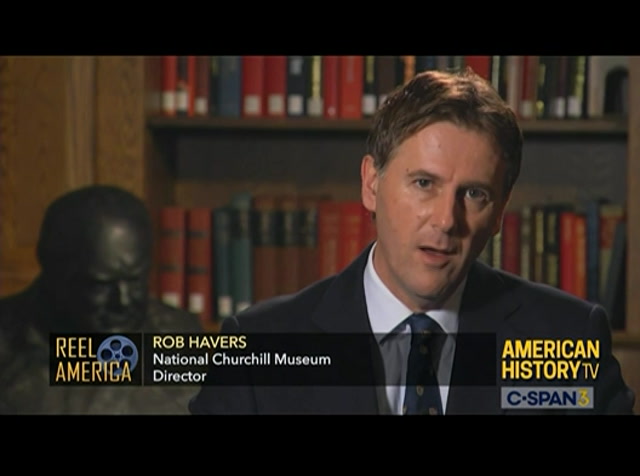 all of us. welcome and thanks. >> thank you very much. >> the origins of the speech "the iron curtain address" go back twa decision by the college for casting who to invite the deliver the john finley greene lecture, and he hits on the novel idea of perhaps inviting winston churchill to come to fort missouri to deliver this address at westminster college. major general harry vaughn happens to be a military aide to president truman. vaughn persuades him to write a handwritten invitation. the words inscribed are, this is a wonderful school in my home state.
12:41 pm 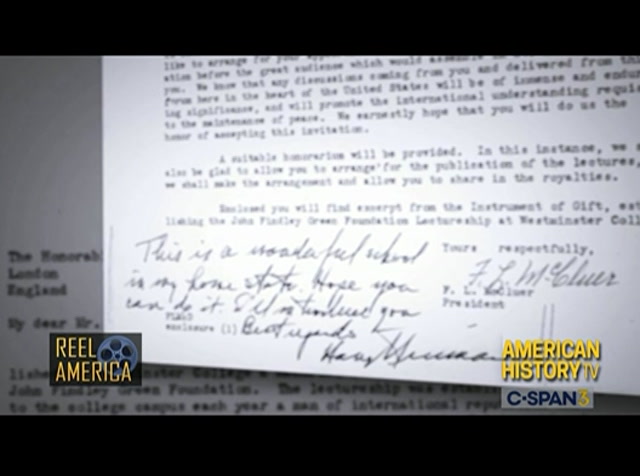 hope you can do it. i'll introduce you. best regards, harry truman. >> it is this letter that brings churchill across the atlantic ocean to the heartland of the united states, convinced that he has obtained the world's attention. >> fulton's biggest day in history, as the paper put it, had finally arrived, march 5th, 1946 was somewhat overcast has crowds lined the streets in anticipation of churchill's motorcade. about 25,000 people were on hand to welcome the dignitaries when they arrived just afternoon from jefferson city. there were marching bands, flags, and balloons. they set up on the back of the open limb limousine. dr. frank mcclure sat down lower on the seat. churchill smiled at the crowd, giving his "v" for victory sign as waiving his cigar as the car we've had along the route. at last, the motorcade entered
12:42 pm 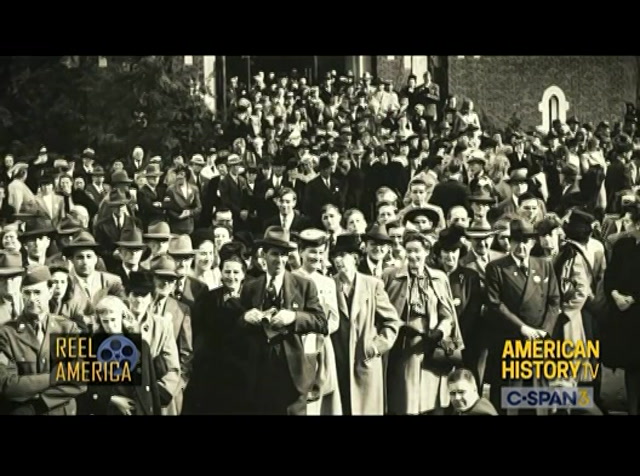 the grounds of westminster college. loud speakers outside the auditorium delivered the speech to an overflow crowd. the atmosphere was one of anticipation and uncertainty as chuchbl had kept the can he have the his speech close to the vest. in the buildup to this moment, churchill held court with the u.s. press corps on the train trip to fulton, missouri. i think no comment is a splendid expression, he told reporters who asked what he would say. i'm using it again and again. throughout his life, churchill had craved the world stage, and here he was once again drawn to the fire of controversy that his words were sure to bring. this was the moment he'd waited for, to voice his ominous warning about the threat of communism in europe. churchill had always possessed an uncanny premonition of
12:43 pm 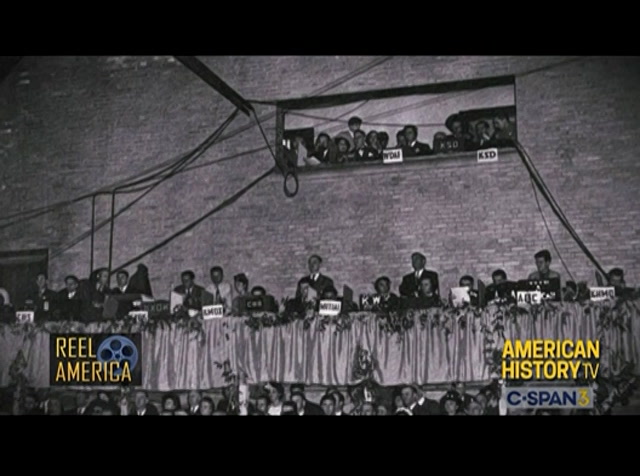 history and its implications. his rich or torery inspired a broad range of reactions. his moment in fulton would be no different everyone anticipated controversy. churchill did not disappoint. >> from stepping in the baltic to the adriatic, "t" an iron curtain has descended across the continent. behind that line, all the capitals of the ancient states of central and eastern europe. warsaw, berlin, parag, vienna, budapest, belgrade, bucharest, all these famous cities and the populations around them lie in rupture. i must call the soviets and all our the subjects in one form or another, not only to soviet
12:44 pm 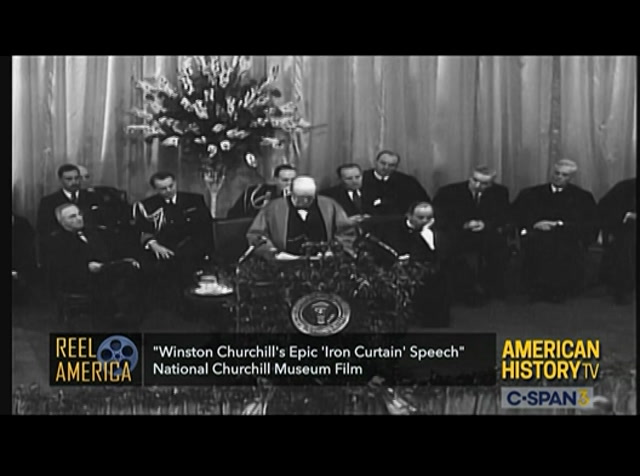 influence, but to a very high and, in some cases, increasing measure of control from moscow. an attempt is being made by the russians in berlin to build up a quasi communist party in occupied germany by showing special favors to groups of left-wing german leaders. at the end of the fighting last june, the american and british armies withdrew westward in accordance with an earlier agreement to a depth that at some points of 150 miles affront of nearly 400 miles in order to allow our russian allies to occupy the vast expanse of territory which the western democracies had conquered. if now the soviet government tries by separate action to build up a pro-communist germany
12:45 pm 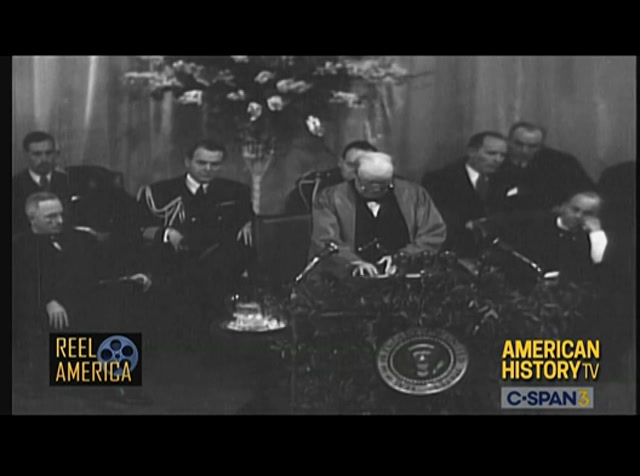 in their areas, this will cause new serious difficulties in the american and british zones, and will give the defeated germans the power of putting themselves up to auction between the soviets and the western democracies. whatever conclusions may be drawn from these facts, facts they are, this is certainly not deliberated europe we foukt to build up, nor is it one which contains the essentials of permanent peace. on the other hand, ladies and gentlemen, i repulse the idea that a new war is inevitable, still more that it is imminent, it is because i am sure that our fortunes are still in our hands, in our own hands, and that we owe the power to save the future that i feel to speak out now
12:46 pm 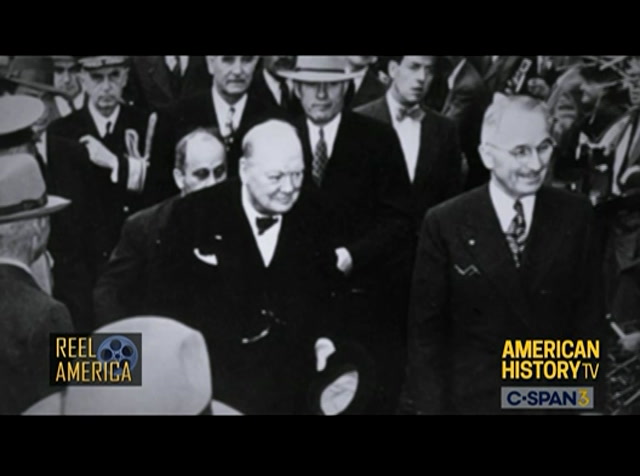 with "t" occasion and opportunity to do so. >> chuvl walked away certainly he had stirred a hornets nest of controversy. he knew his anti-soviet remarks would make a splash and would later remark that the speech started thinking that would make history. churchill brushed aside criticism that labeled him a warmonger because he did believe the soviets sought the fruits of war and the indefinite expansion of their power and dock trinz. the only proper response was to hold fast. i am convinced that there is nothing they admire so much as strength. predictively, the world's reaction was outrage and his stance against moscow was thought to be dead wrong. president truman, who had personally invited and introduced churchill insisted he had no idea what was in the speech ahead of time, although many historians believed truman was aware of what churchill had written. the "chicago sun-times" called the spech poisonous. one new york paper described the
12:47 pm 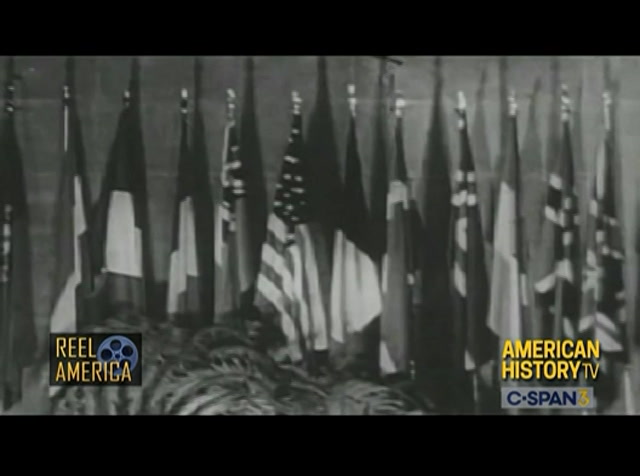 speech as an ideological declaration of war against russia, while many in congress called it shocking. on the trip pack to london, crowds gathered outside his new york hotel chanting winnie winnie go away, snaigsz here to stay. a report found his conclusions were supported by u.s. conservatives and military departments but condemned by congress, the media, and the public. nevertheless, it stated the speech gave the sharpest jolt to american thinking of any utterance since the end of the war and would set the pattern of discussion on world affairs for some time to come and in the soviet union russian leader joseph stalin denounced the speech as war mongering and compared his speech to adolf hitler. >> two world war i historians
12:48 pm 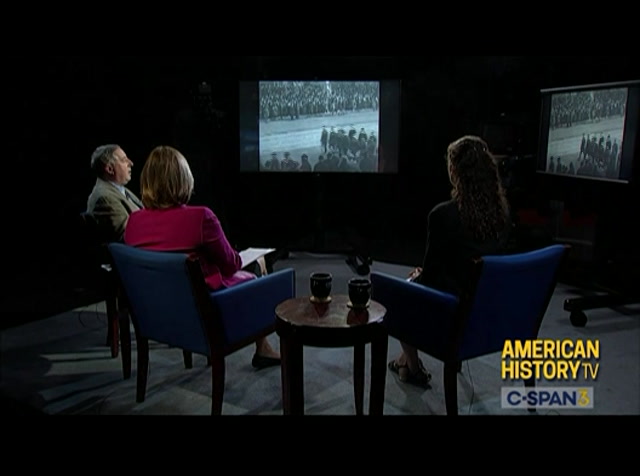 joined to us narrate a 1921 silent film on the journey of the remains of an unknown american world war i soldier from france to arlington national cemetery. >> allison, how did this whole concept of the unknown soldier being honored come about? >> it really goes back to the beginning of the mechanicization of warfare you see expand during world war i. you get a lot more unidentifiable remains. of course you had a lot in the civil war, but people really were struggling with the fact that they could not figure out who many of these casualties were. so great big and france in 1920 buried an unknown soldier in each of their countries. in great big it was in westminster abbey and in france it was under the arc de triomphe. hamilton fish of new york submitted legislation to before an unknown soldier from the u.s. >> here the casket is being
12:49 pm 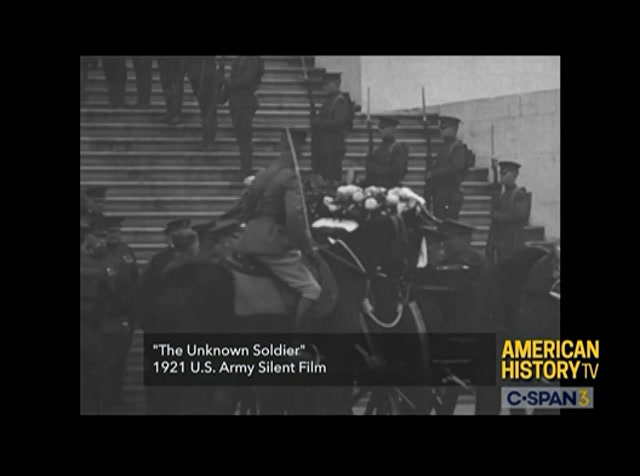 carried down the steps of the capitol, a scene modern americans are familiar with similar ceremonies in our time and put on the horse-drawn that will make it through the streets of washington and over to arlington cemetery. let's watch for just a minute. >> so that is where today you see the larger sarcophagus over that, which was not constructed in this moment.
12:50 pm 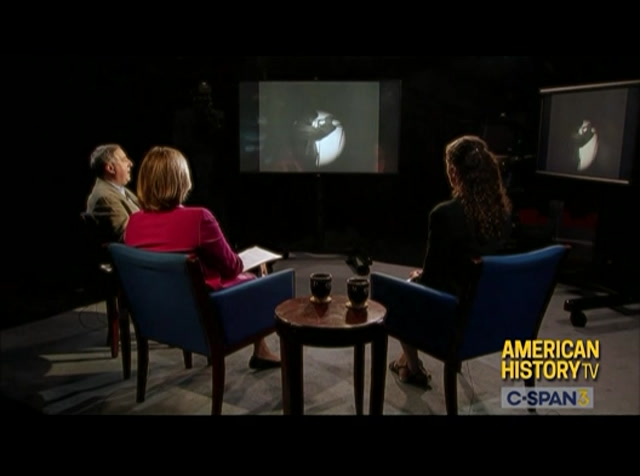 >> there's a final shot of arlington national cemetery, much as we see it today with the white head stones no parking graves of the fallen. >> with the capitol lit up at night. >> i think it's important to pause for a moment and think about the meaning that the unknown this time. it was about world war i, yes, but it was also thought to be a memorial that could connect all of the different american conflicts, that could stretch beyond world war i and really honor all of those who served in our nation's armed forces. that really continues very strongly until today. >> you're watching american history tv, exploring our nation's past. >> c-span's american history tv continues now. you can find the full schedule for the weekend on your program guide or at c-span.org/history. our guests tonight, candace millard, author of three "new york times" best sellers, the river of doubt, theodore rose volt's darkest journey.
left
right
Borrow Program
tv