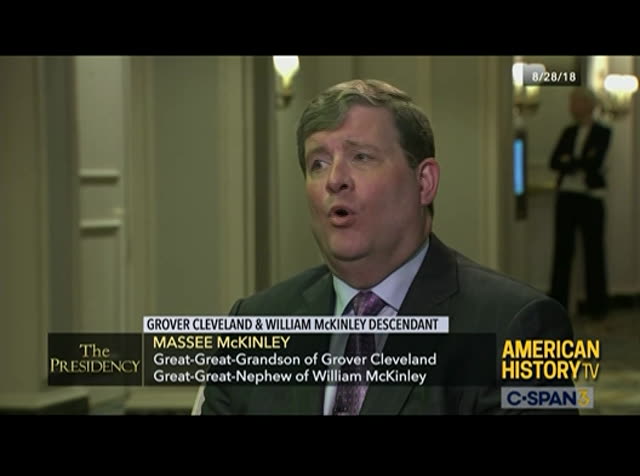 do have a greater respect for the office. i have a greater respect for the people that occupy that office and -- and the sacrifices that they make each and every day. you miss family time, a lot of time and i know for a fact that william mckinley because the way they had to travel back then lost a lot of that time with his young daughters because they traveled by rail and it was a part of his wife for a period of time and that was traumatic because of her illness. >> well, thank you for visiting with us during this white house
10:48 am 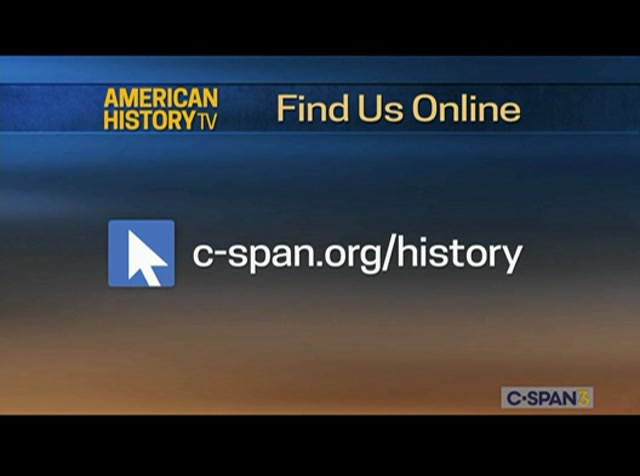 >> i think fdr used this place as a place to bring these world leaders up but tend to let their guards down and focused on system of the major issues that they're here to talk about. springwood is really the same way. when you talk intoed the buildings, you didn't come in as king or queen, prime minister, first lady whatever your title was, you came in as a friend and coming into somebody's home as a friend is much different than walking into their place of business assay colleague. going into the white house with fdr and talking about major world events would be much different than coming to this secluded porch where, you know, they were no photographers wait to go take a picture of the handshake.
10:49 am 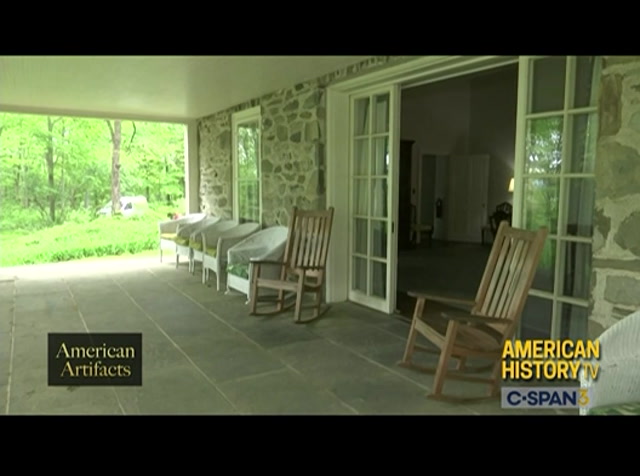 it was a place where he could open with his guest and showing him sitting in his wheelchair layed it all out there. he's there showing off the fact that i'm not hiding anything from you and i think guests received that in such a way that they were willing to not hide anything from him and the way they used this place really facilitated some wonderful conversation and they were able to really delve into some of the major issues and i think come up with some really incredible solutions that may not have been possible at the white house or more formal places. >> this building was constructed in 1938. fda brings an architect to the site by the name of henry tooms by the state of georgia which was no strange internal revenue in fdr and had worked together in projects including the high park town library, stone cottage at valkill and warm springs in
10:50 am 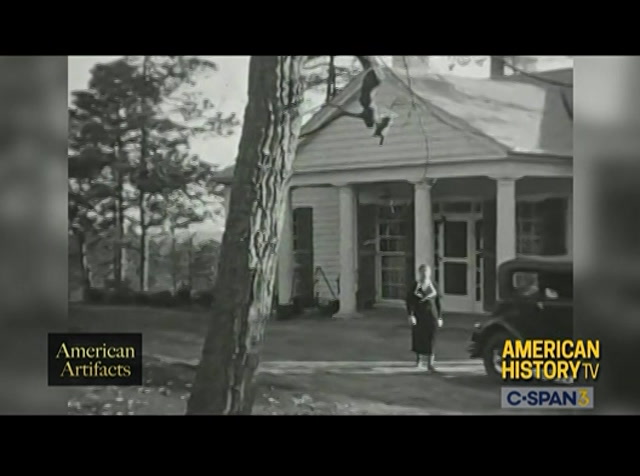 georgia so he knew what fdr wanted in the building and he was not brought to design the building himself. fdr had every intention of doing that. he was going to design the building and tooms was the guy standing behind him making sure that everything was going to work but he designed it not only to meet his personal interest in the dutch influence of the building but also the physical need. he was in a wheelchair and so he designs this in such a way that he can use this place that he doesn't need assistance. there was a ramp on to the porch which he would have been helped up but once he got into the building he would enter through a sliding door for which somebody in a wheelchair was important because sliding doors didn't what side you were on, you slid the door open. most sliding doors would have the track at the bottom. this particular door, it was reed to the floor so it created a small bump.
10:51 am 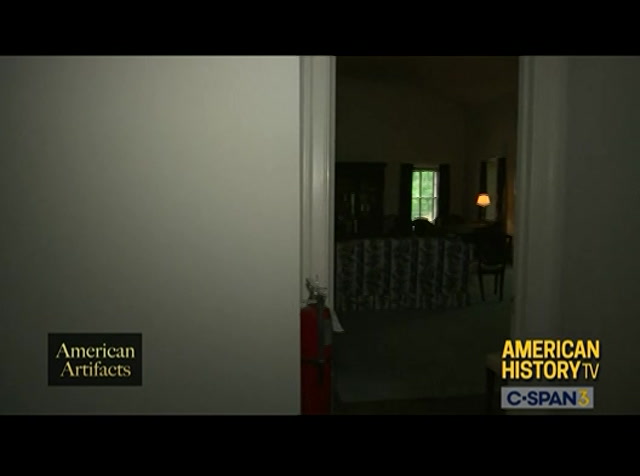 the hallways were wider, it was one flat surface all the way through, all hardwood floor, no thresholds or seals between the doors, no obstacles in the way. even going into the kitchen was the double sung doors and you pushed the door away from you so he got to used the building more than he could use springwood himself. so he got to be the host up here. he got to host his guests which he took a lot of pride in. he -- he loved to show this police off. he loved to be able to serve his guests and pictures of him up here always smiling and enjoying himself. he had toaster and make tea and by all accounts it's the best toast that anybody had ever had. by afternoons he probably would have offered you a martini and
10:52 am 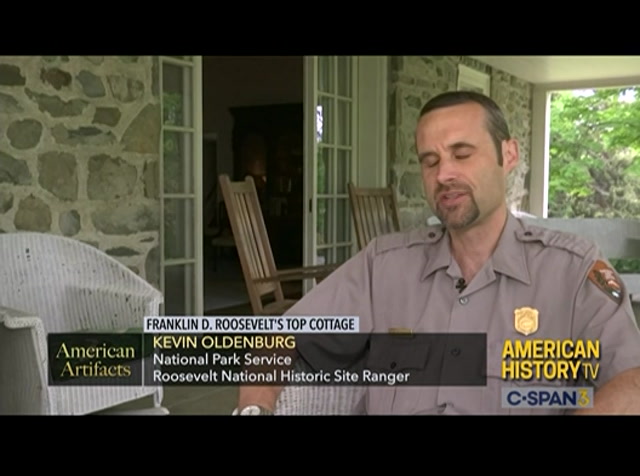 you would have been very smart to say no, thank you, mr. president because all accounts the martinis were dreadful mixed with entirely too much rum. it was a place to escape the mob, the people that would come to visit or tried to visit springwood while he was president, it was a much different period back then where the public would often come to the president's house trying to meet, greet, ask questions, voice opinions and this was a place that was removed far enough away from springwood that he could get away from all of the activity going on below. we have a recorded number of visits of top cottage by fda in '95. those are the ones that we can document through photographs and various other sources were others that were not documented, probably. some of the guests included madame of china, king george of
10:53 am 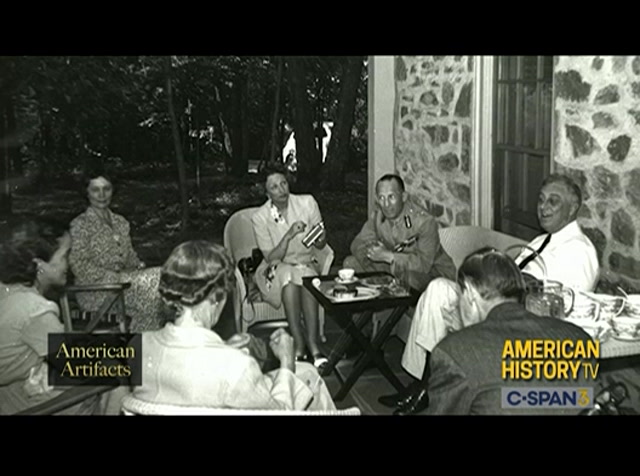 greece, princess juliana and prime minister of canada, queen elizabeth, winston churchill was on this porch four different times. members of his cabinet administration, folks that carried hopkins, many times when they arrived here, they're in need of help or assistance and i think they were willing to sit in a place probably far removed from their comfort zone and i think it may have been quite refreshing for them to get away from everything happening below as well and seeing fdr for the man that he was rather than the fact that he was the president of the united states. probably the one most people are familiar with is the picnic that, the weekend that the king and queen of england arrived here in high park. the visit was very historic visit as it was the tiers time
10:54 am 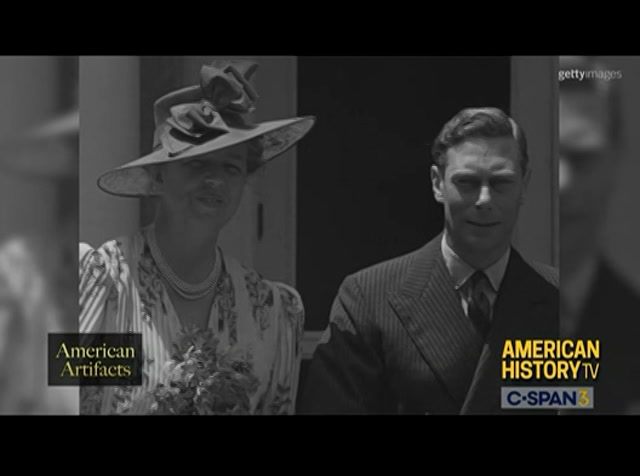 that a seated british monarch had been to the united states and that visit was capped off with a picnic at the porch, the hot dog picnic and when this place opened up to the public in 2001, the queen was still alive really had nothing to do with the hot dogs or cottages or building but she talked about fdr's driving and the roads we mentioned earlier, the bumpy roads, she said i was holding on for dear life. she said, i thought for sure i was going to die and in her own words said fdr drove like a bat out of hell. they arrived up here for that picnic and she quickly exited the car and very steep last section and was probably happy to make it up here in one piece but she exited the car and
10:55 am 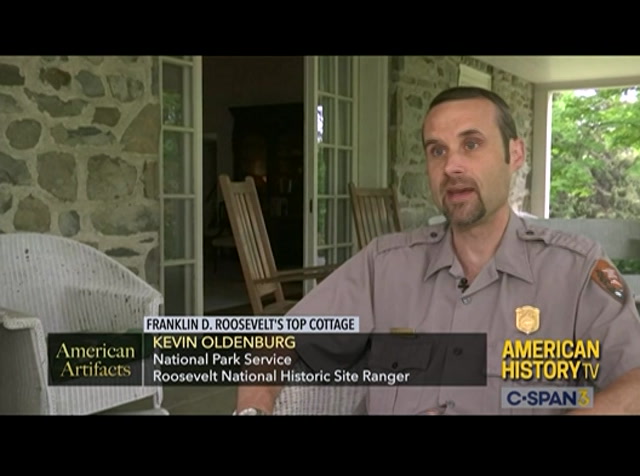 exited the picnic and fdr said why don't we get back in the car and why don't we go downhill and she said no. apparently having risked her life that day and wasn't prepared to do it a second time. she wrote down the hill with fdr's secret service detail and i'm sure fdr had a wonderful story to tell andal womennished over the years as the day the queen would in the ride with him. but while they were up here treated the royals to all american picnic. we hear about the hot dogs that were served but the menu was more vast than that, virginia ham, smoked turkey, hot sausages, is that berry shortcake for desert but it was the hot dog that is stole the
10:56 am 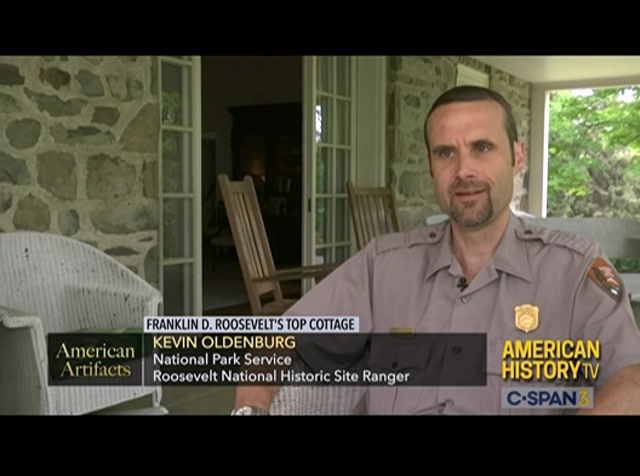 show. descriptive way to teach somebody to eat a hot dog but she did not have one and the king back and enjoyed his but the queen did not have one. this visit by many in the press was a social visit but the visit was much more important than that. you're looking at the middle of june of 1939. this was 2 and a half months before september 1st in the invasion of poland, the beginning of world war ii and they were sent over by chamberland to secure the friendship between the nations to make sure that the united states would continue to be allies with the british. this was a very important visit and i think lends itself so some of the earliest involvement of the united states into the war effort at that time.
10:57 am 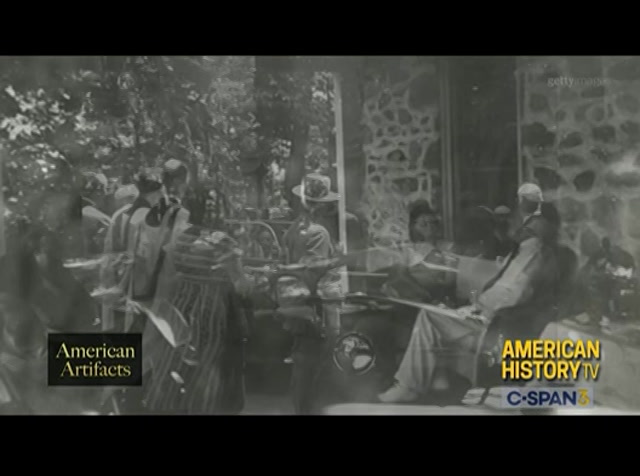 [applause] winston churchill was here four different times but on june 20th of 1942 was probably the most important visit. we know that earlier in the day that he and fdr, harry hopkins are down in fdr study in springwood and they are talking about two baloys, british atomic program, the code name for that. the researching was taking place in london which was rather difficult at the time with constant bam barding of the city so they weren't making the progress that they were hoping to and word was coming down that the germans were close to developing an atomic weapon. churchill was asking fdr to bring the program and scientists over to the united states and fdr agrees to that and within two months time, two balloys is gone and the manhattan project was born out of that.
10:58 am 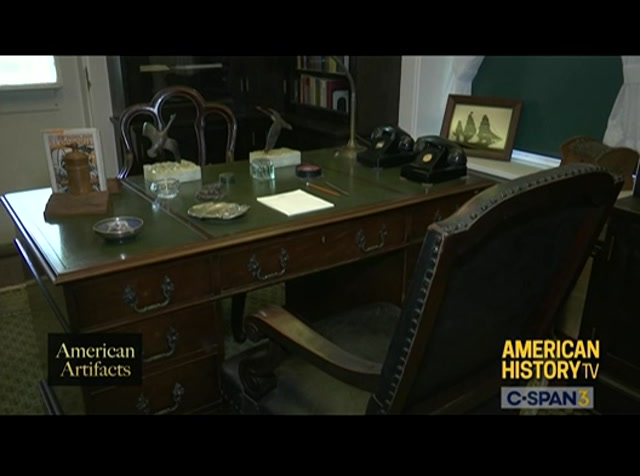 we know they're discussing this at springwood from churchill's memoirs and through margaret daisy dairy entries of that day and she sets the mood up here at top cottage. she doesn't necessarily spell out the words that were said, she talks about the visit which occurred at about 4:00 o'clock that afternoon at spring -- at top cottage and she said the p in mr. c seems attractive. they had the weight of the world on their shoulders. we all waited for them to speak. we may never know the exact words that were set up here but if there was any place to have a conversation of that magnitude this was the place to do it. the press was not allowed up here. there was no telephone. no outside communication whatsoever. this was the place to keep a secret. this is a place where you're
10:59 am 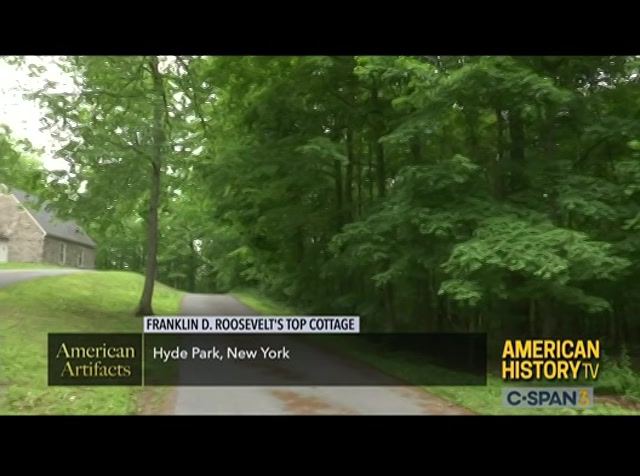 dealing with the stresses of the presidency and everything that's going on in washington. the only president to this date who has really gone through two major events, the great depression and world war ii and i think the suppresses of the presidency, you know, were pretty hard on him and i think sitting up here as quiet and peaceful as this place was a place to recharge myion
11:00 am 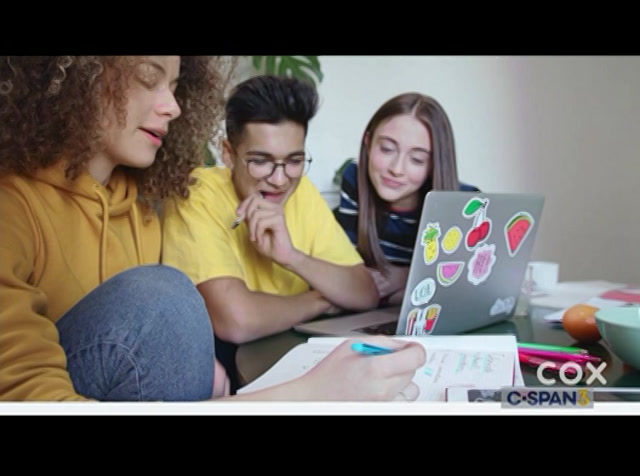