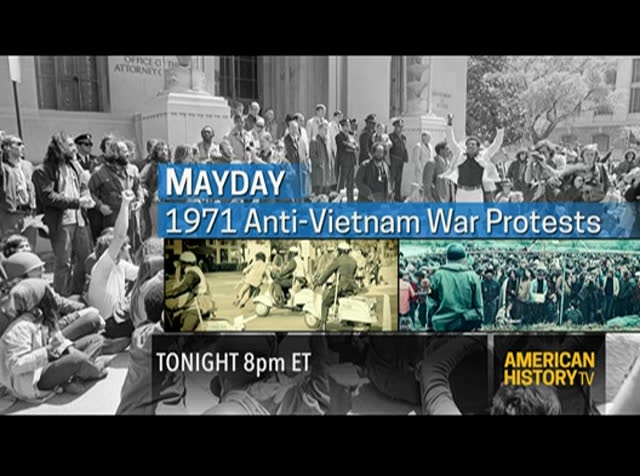 tens of thousands of anti-vietnam war protesters converged on washington, d.c. in may of 1971. more than 7,000 of them were arrested in a single day. tonight on american history tv, we look back 50 years at the forces that collided on the capitol streets that spring with a journalist. that's at 8:00 p.m. eastern, here on american history tv on c-span3. 60 years ago, exiled forces backed by the cia mounted a failed invasion at cuba's bay of pigs. next, a compilation of news reels from the january 1959 revolution through the end of april 1961. it reveals how enthusiasm for
9:10 am 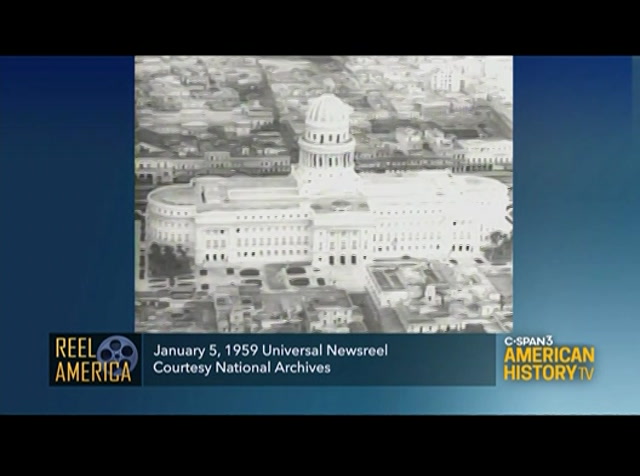 castro turned to skepticism, then opposition as the island nation allied with the soviet union and china. ♪♪ >> from his hold in the mountains, fidel castro emerged triumphant after two years of warfare against the regime. the revolution ended with the fight and entry into havana of rebel forces. the forces of castro's 26th of july movement, named for the anniversary of his first attack on the regime in 1953, have grown fastly. their power enlarged by captured and surrendered army weapons.
9:11 am 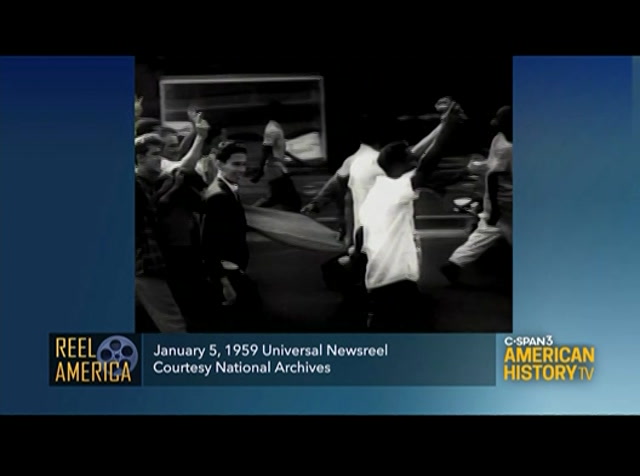 nearly two years of warfare culminated in victory at 1958 ended. the departure touched off rejoicing. at first, the celebration was peaceful. shouting and cheering crowds surged through the city. then the temper changed and an ugly mob ran through the streets. its target, the symbols of the overthrow regime.
9:12 am 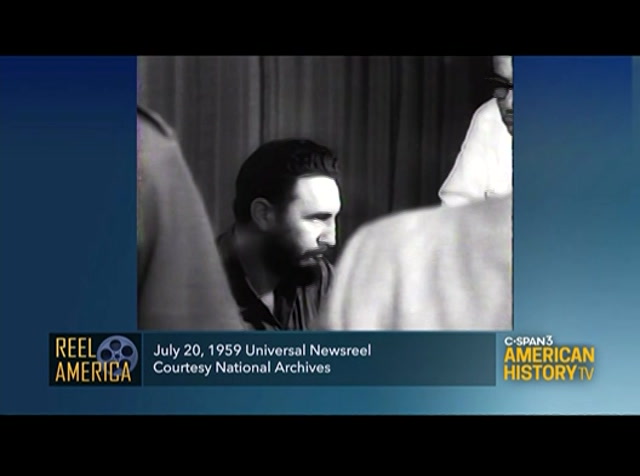 now a new leader is on the scene. fidel castro. in many ways an unknown quantity in policy and certain to be dominant in cuba's new era just begun. fidel castro demonstrates his unchallenged power over cuba's masses. he announces his resignation as premiere and the response is explosive. mass demonstrations by workers and university students calling on castro not to resign. hailing castro the maximum leader of the revolution. the president is shown when
9:13 am 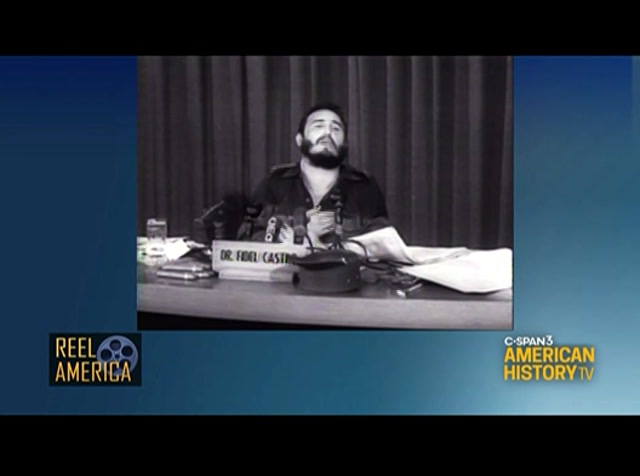 castro installed him as provisional president was ousted to be replaced. it is certain whoever may be president or premiere, castro is number one man in cuba. in an emotional four-hour broadcast that evening, he accused the former president of near treason, toppling him from the role of hero to one threatened with mob violence. castro's dramatic show of strength makes it clear that after 6 1/2 months, he is still riding high on a wave of turbulent mass emotion. one million peasants jammed the square in response to the call of castro for a celebration of the sixth anniversary of his revolutionary movement. it's the greatest mass rally in the western hemisphere.
9:14 am 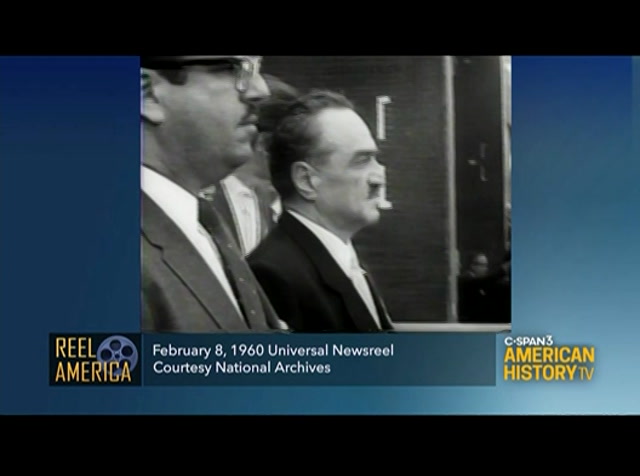 enjoying another aspect of his character, castro dons a baseball uniform to pitch a full inning in a benefit game. his new president tosses the first ball and the game is on. castro pitching is credited with striking out the three batters he faces. this is one game where the ump has to be careful. in havana, the soviet deputy premiere opens a counterpart to the soviet fair in new york city. of more significance is the presence of castro at the ceremonies. the visit is part of a program to woo castro.
9:15 am 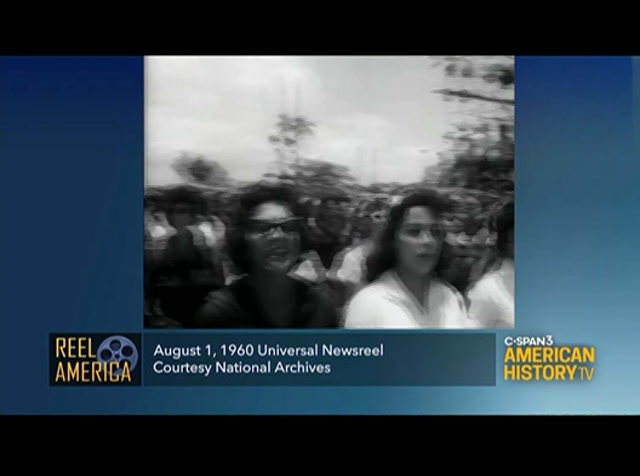 havana heard a soviet composer leading the orchestra. despite isolated demonstrations, the soviet may have made real progress towards building up trade and re-establishing diplomatic relations. thus adding to america's headaches and our troubled relations with the caribbean neighbor. cuba celebrates the seventh anniversary of castro's revolutionary movement with a red chinese delegation and one from bolivia. a quarter of a million will march by. his observance where he directed the revolt against the regime is one of his few appearances. he has now laid aside his duties at doctor's orders to take a complete rest. doctors say his recovery is assured. his brother, who is enjoying this reception in moscow,
9:16 am 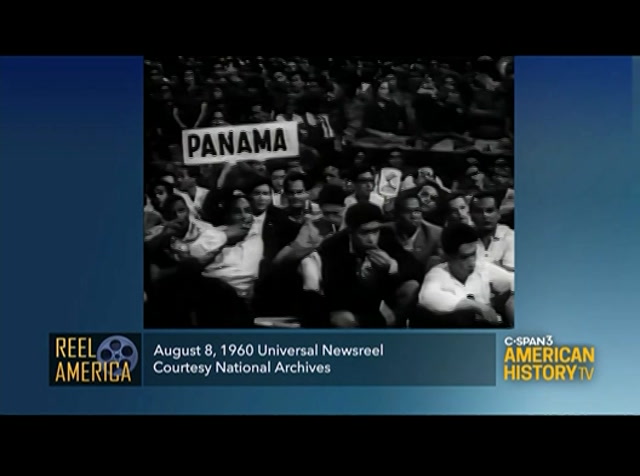 hurried home. he is the number two man in cuba's revolutionary government. here at moscow's trade union house, he seems to respond eagerly to the soviet's wooing of cuba. anailing castro has top billing. he delivers a talk. after raving for a half hour, the cuban premiere loses his voice. he regains enough strength to come back and announce his latest blow again of the united states, the seizure of three-quarters of a billion dollars of properties in cuba. castro promises to pay for it in
9:17 am 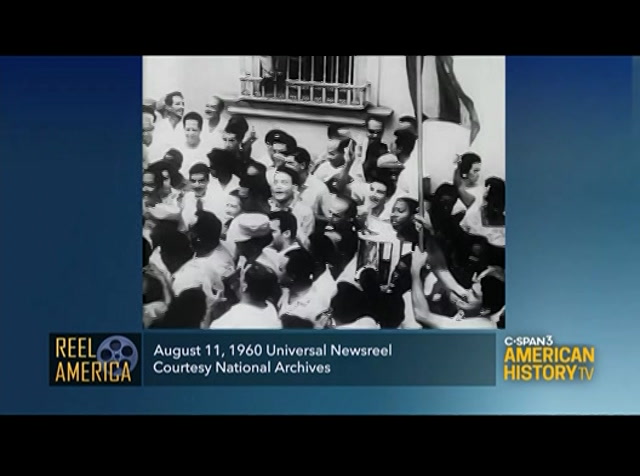 50 years. at the rate the cuban economy is failing, the payoff may come sooner than he expects. the cry in havana. this is a pro-castro crowd enthusiastically defacing the telephone company building. a day after this demonstration, castro charges that the u.s. in what he calls is trying to defeat the revolution. there are no clergymen at the mock funeral of the telephone company. the organization of american states votes sanctions against the dminican republic.
9:18 am 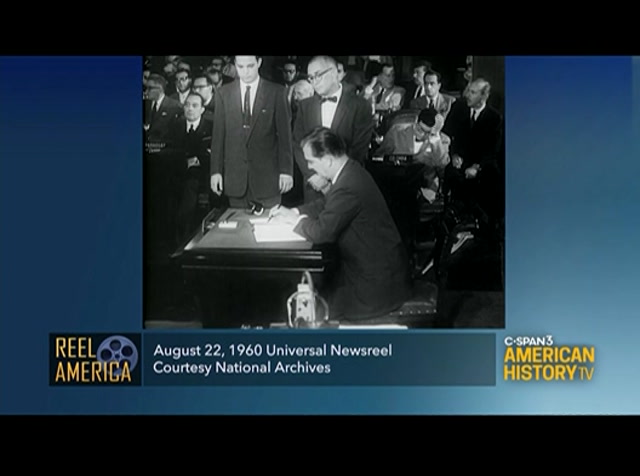 an economic boycott and diplomatic sanctions are voted. the united states secretary of state takes up the next topic, calling for action to meet the threat of growing red influence in cuba. the reaction to the debate was explosive. in cuba, castro defiant. proclaimed friendship with the soviet union and communist china. the oas took action against dominican strongman rule. even as cuba threatened to walk out, president eisenhower in his press conference recalled common ties and interests and left open the door for an easing of tensions.
9:19 am

>> by no means do i want to admit or charge that this situation is irretrievable. cuba has been one of our finest friends. we are the ones that have conducted the war. when they got in trouble, we had an occupation. we set them on their feet and set them free. we have had a long history of friendly relationships. we tried to keep our hands out of their internal political affairs. we have not tried to throw out someone we didn't like. i would think that the very welfare of the american -- of the cuban people demand some kind of composition of the difficulties between the american states, including our own on the one hand and cuba on
9:20 am 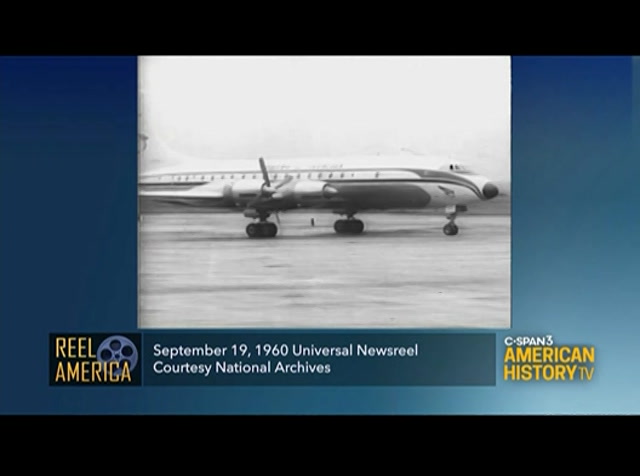 the other. >> cuba's fidel castro arrives in new york, the first in a parade of heads of government. all on hand for the opening of the united nations 15th general assembly. castro appears subdued, unlike the orations he delivers in havana broadcasts, his arrival speech is only a few words. >> i want to salute to the people of the united states. my english is very plain. the other things i want to tell,
9:21 am 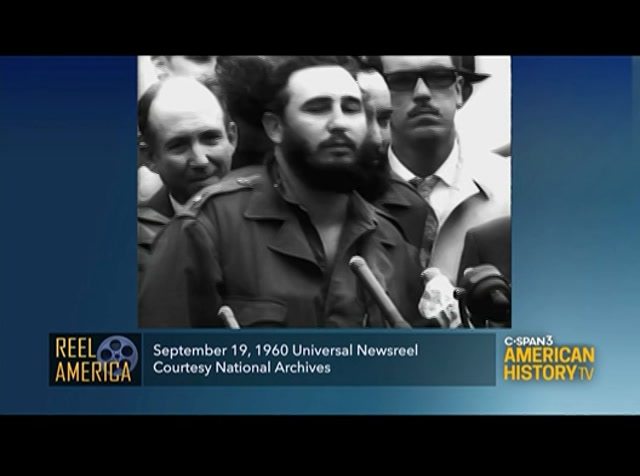 i wish -- the general assembly of the united nations. >> the first red satellite to achieve are from czechoslovakia and poland. despite the status at high ranking red leaders, they are almost ignored by the numerous demonstrators, many of them east european refugees who protested the arrival of khrushchev and other reds. the russian liner sailed with the heads of five satellite states, arrived on a foggy morning, heading up the east river to the dock closer to u.n. headquarters. one boat was hired by the longshoreman's union. hundreds of demonstrators massed
9:22 am 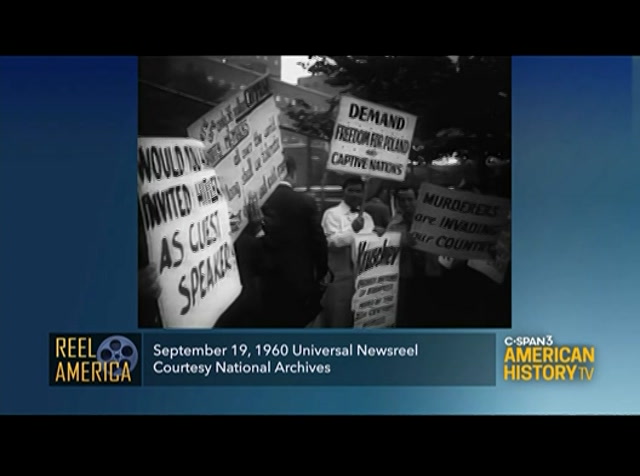 despite heavy rain. carpets have been laid for the occasion. one of the most massive assemblies of police and security men ever gathered in new york. khrushchev could barely be glimpse through the prong of protectors. his brazen visit to the shores on his own invitation promises to make a general assembly session already momentous into a potentially explosive or historic international meeting. at least 16 new members are to be admitted. a score of heads of government will be present. a dramatic setting with global stakes at issue.
9:23 am 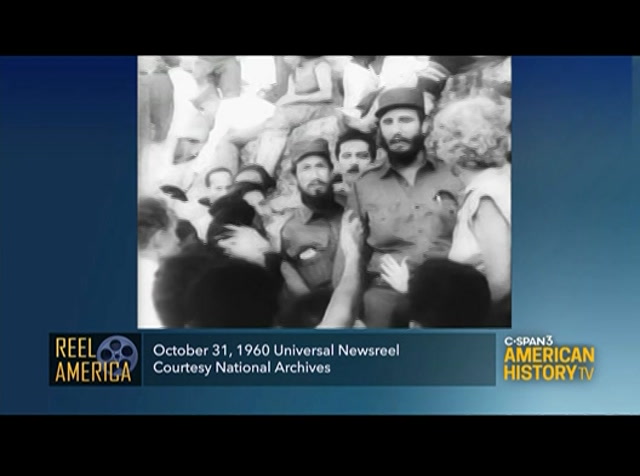 castro whips up a furry in the united states. he calls out some 200,000 militiamen for training and guard duty at key points in a move timed to coincide with the landing of 1,400 american marines for a weekend of liberty after training exercises in the caribbean. castro's invasion scare enlivened a debate in the united nations on cuban charges of aggression by the united states. in moscow, the line of friendship. khrushchev receives a cuban flag as he lined up for the anti-americanism of castro.
9:24 am 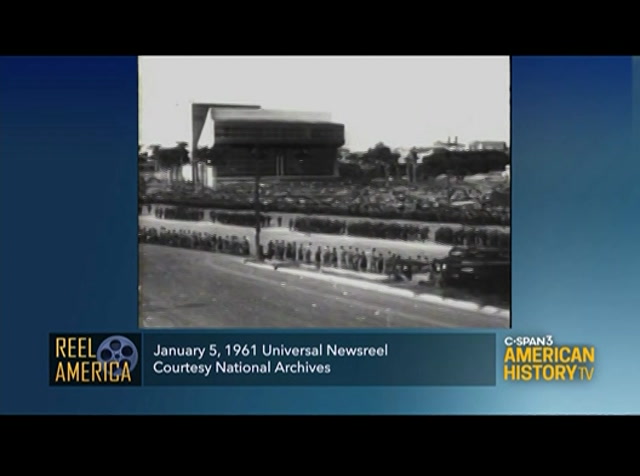 castro marks the second anniversary of his revolution with the biggest military parade staged in cuba. shortly afterwards, castro demanded the united states embassy reduce its staff to 11 persons. it was the last straw in his long campaign of provocation and harassment. president eisenhower broke off diplomatic relations with a message read by the press secretary. >> there's a limit to what the united states in self-respect can endure. that limit has now been reached. our friendship for the cuban people is not affected. it is my hope and my conviction that in the not too distant future it will be possible for the historic friendship between us once again to find reflection in normal relations of every sort. meanwhile, our sympathy goes out
9:25 am 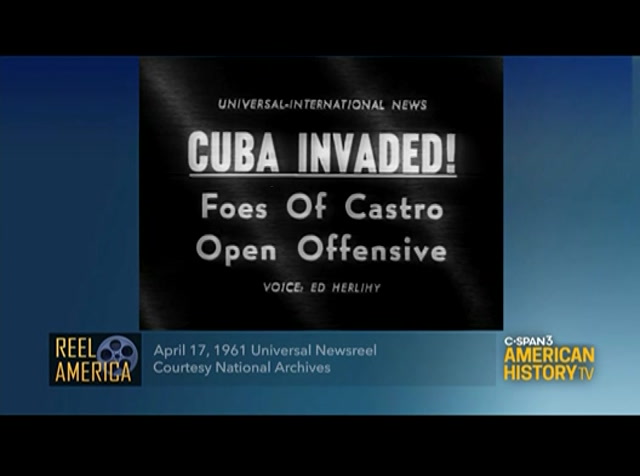 to the people of cuba now suffering under the yoke of a dictator. >> the assault has begun on the dictatorship of castro. cuban army pilots opened the first phase of organized revolt with bombing raids on three military bases. two of the b-26 bombers seek asylum in florida. on the heels of the air raids, landings were affected by rebels at several places on the cuban coast and the rebellion against the dictator was on with the ref -- refugee climate claiming a full-scalehavana, the acting fo minister showed rockets fired which he claims have u.s. markings. the cuban foreign minister accused of united states of unleashing a war of invasion.
9:26 am 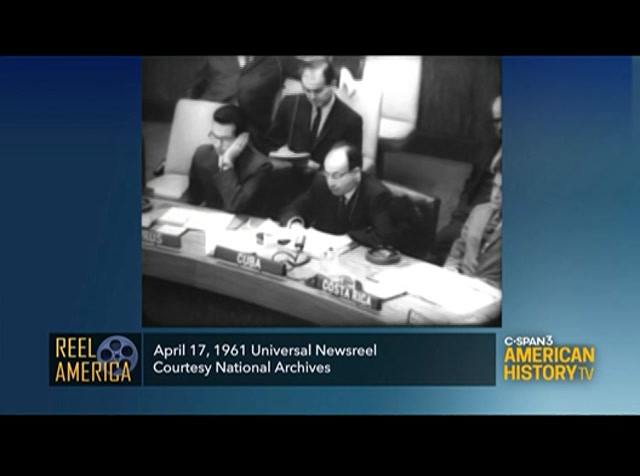 he says the soldiers trained in florida. the ambassador makes a quick denial. >> these charges are totally false. and i deny them categorically. the united states has committed no aggression against cuba and no offensive has been launched from florida or from any other part of the united states. >> there's a mysterious training depot where some of the raiders may have been based. the government there denies the cubans are among the soldiers being instructed by observers say otherwise. professional soldiers are among the teachers. the men mysteriously disappear. guatemala has no brief with castro and has aided the rebels. in cuba, the people have been exhorted to push back the
9:27 am 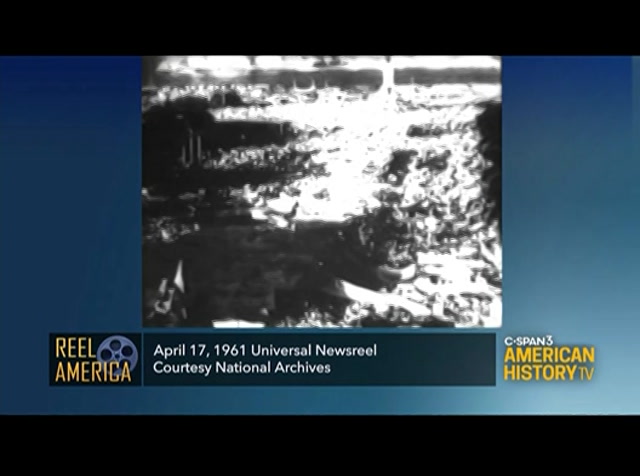 invaders. 300,000 militiamen have been mobilized. the invasion was successful in its early hours with castro, of course, blaming the u.s. is it the first chink in his armor? weekends on c-span2 are an intellectual feast. american history tv documents america's story. on sunday, book tv brings you the latest in non-fiction books and authors. funding for c-span2 comes from these television companies and more. including comcast. >> you think this is just a community center? no. it's way more than that. >> comcast is partnering with community centers to create lift zones so students from low income families can get the tools they need to be ready for anything. >> comcast, along with these television companies, support c-span2 as a public service. tens of thousands of anti-vietnam war protesters
9:28 am 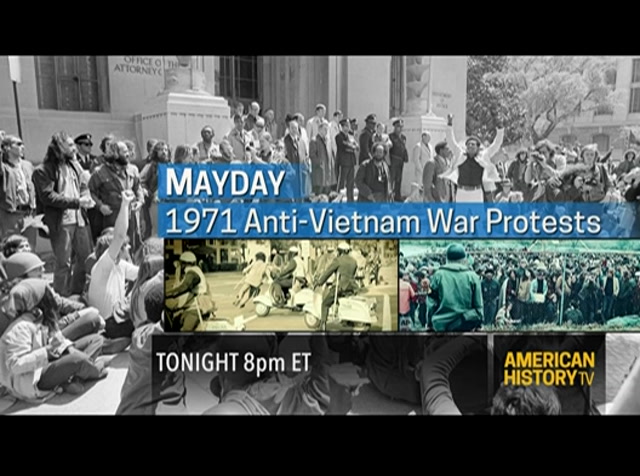 converged on washington, d.c. in may of 1971. more than 7,000 of them were arrested in a single day. tonight on american history tv, we look back 50 years at the forces that collided on the capitol streets that spring with a journalist. he is the author of "mayday 1971, the untold history of america's biggest mass arrest." that's at 8:00 p.m. eastern, here on american history tv on c-span3. on november 2, 1960, a "new york times" television reviewer wrote, an exciting new voice, provocative, sensible and challenging, came to television last night. dr. albert burke, former director of studies at yale university, next on reel america, we bring you that broadcast with educational television pioneer albert burke. using footage and interviews from cuba, he argues
left
right
Borrow Program
tv

This compilation of Universal Newsreels from January 1959 to April 1961 covers the Cuban Revolution to the aftermath of the failed Bay of Pigs invasion.