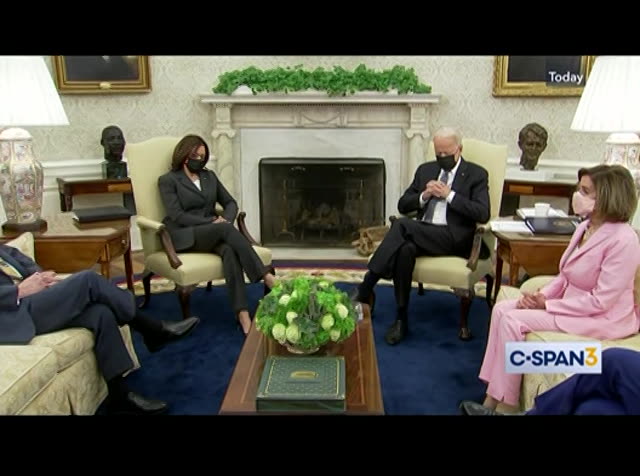 pelosi and majority leader schumer. and what we're going to talk about today is -- and when i ran, i said i wasn't going to be a democratic president, i was going to be a president for all americans, and what the bottom line here is, we're going to see whether we can reach some consensus on a compromise. we're going to talk a lot about infrastructure today to see if there's any way we can reach a compromise that gets the people's work done and is within the bounds of everyone agreeing. and that's the purpose of this meeting. not much more to say right now. but we're going to get going. that's it. >> how do you expect to do that, sir? >> just snap my fingers, it will happen. thank you.
4:20 pm 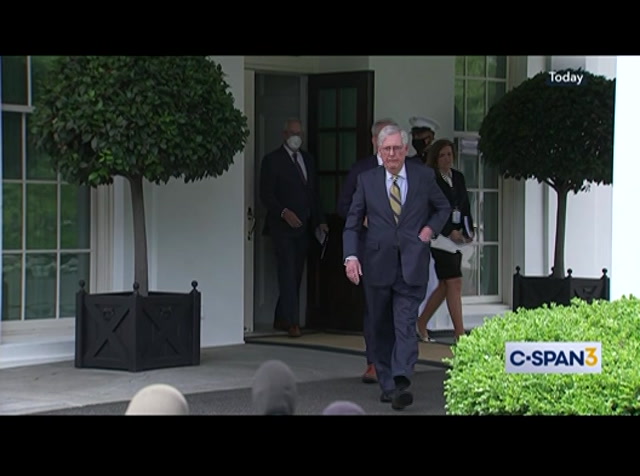 >> let's go, you guys, thank you. after the meeting with president biden about infrastructure and other issues, house and senate republican leaders stopped to talk with reporters outside the white house. >> hello, everyone. well, we had a good hour and a half meeting with the president, the vice president and two democratic leaders. almost all of the discussion was about infrastructure and i think i'm safe in saying there is
4:21 pm 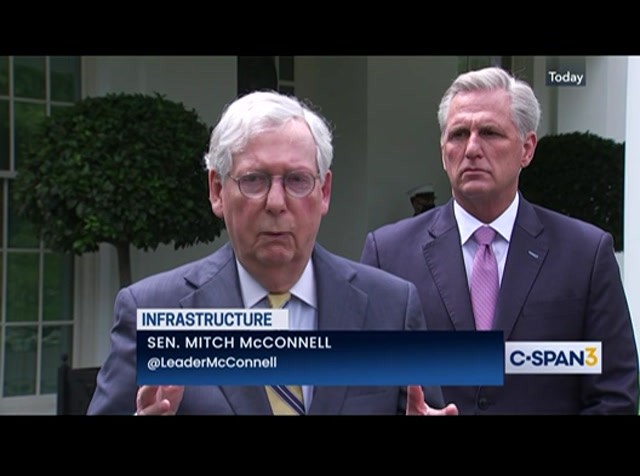 certainly a bipartisan desire to get an outcome. clearly senate republicans are not interested in revisiting the 2017 tax bill. i think the president and the vice president understand that. beyond that, we're interested in trying to get an outcome and i think the first step is obviously to define what infrastructure is. the definition of it and i think we all agreed to work on that together. my preference is to include the committees, they're where the experts are. the president's actually been meeting with members of my conference, some of them are coming down here tomorrow, who know the most about this and i don't favor having a top down dictation as to what this package looks like, but rather a
4:22 pm 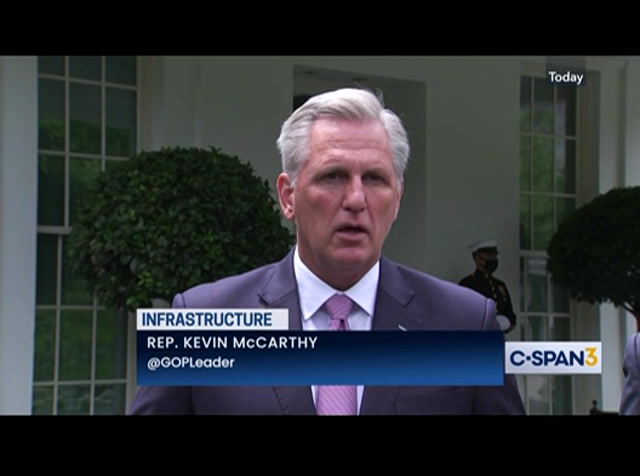 consulting process in which everybody in my conference is involved in it. >> i felt our meeting was very strong when we talked about infrastructure. i think there's a place that we can find bipartisan ship and it's -- one thing i brought to the president, we first have to start with the definition of what is infrastructure? that's not home health, that's roads and bridges, highways, airports, broadband, those are the places we can find common ground and work together. the other thing i think america wants to know is that you're not going to wait a decade to build it. we need reform. most litigated legislation you'll find anywhere, we need to streamline, not wait ten years on average, seven to ten years. if we want to be competitive, we have to have things built now. i talked about my concerns about the rise in inflation, especially the numbers that we see today. the concern of what has happened where incentivizing people not to work in america, as i've traveled this country, the
4:23 pm 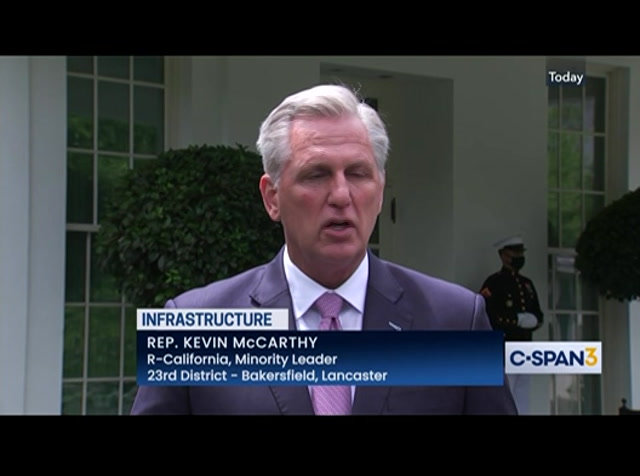 concern i find from a number of people, can't get them back to work. we need to get people back to work, back to school, back to health and back to normal. i also raised the concern along the border that i want to talk to the president about, having traveled there a few times. what i'm seeing there, just -- if america was able to watch those young girls, one even 11 months old, that had a rancher not found them would they even be alive today. the sad part is, that's not the only story like that, it's day in and day out. and those are places we can work together and should work together to try to solve what is happening there. i'm really concerned what i see from a future of economics of america. we have not seen the inflation month over month like this since the 1970s and 1950s. we've not seen gasoline lines and what we're going to find rationing since carter has been president. those are things that we should be looking forward, not backwards and the idea that spending more trillions of
4:24 pm 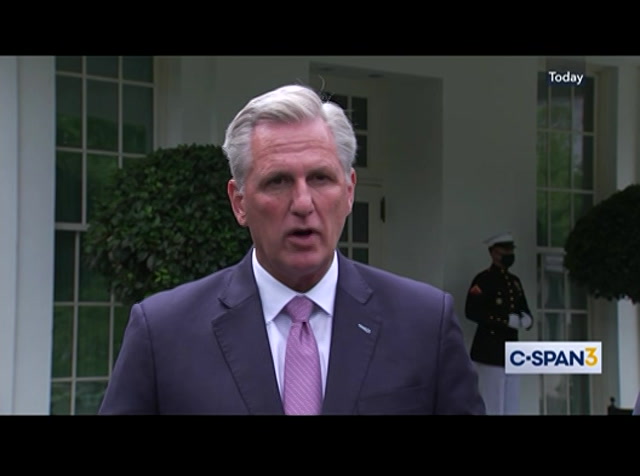 dollars into this economy when you have a supply constraint is actually the reverse that you want to do to keep america and make sure we don't have the inflation going. yes, ma'am? [ inaudible ] well, first of all, the conference will decide, but i don't think anybody is questioning the legitimacy of the presidential election. i think that is all over with. we're sitting here with the president today. so, from that point of view, i don't think that's a problem. >> the white house has talked about $2 trillion package give or take by raising corporate taxes. talking $500 billion on infrastructure, user fees. they don't want user fees. a lot of zeros in between. how do you come to a middle ground? >> not going to negotiate here, but you won't find any republicans that are going to raise taxes.
4:25 pm 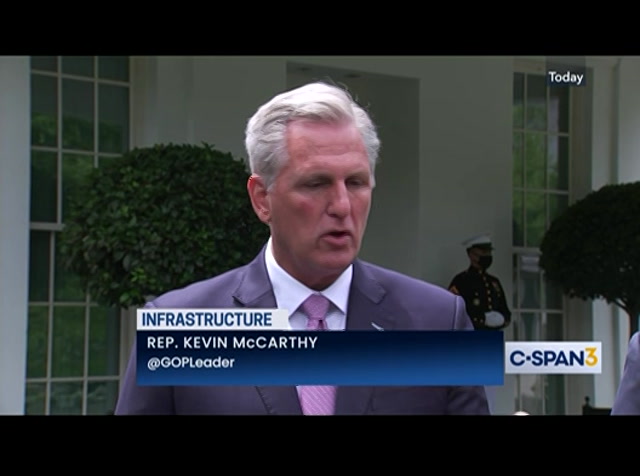 that's the worst thing you can do in this economy when you watch inflation. your gas is going up. remember, gas price today, national gas price has not been this high since president biden was vice president. you watch food costs go up, you're watching housing costs, lumber costs, there is inflation everywhere you go. cars have not moved this high month over month at 10%. so, raising taxes would be the biggest mistake you could make. remember the economy we had when we lowered taxes, the 3.5% unemployment. you had everybody having opportunity regardless of where you are in america. some of the best employment we had. so, that, to us, is a nonstarter. what we walked into the room with, where can we find agreement? and i felt that was productive. i felt all of us as leader and the president and the vice president sitting down, saying, let's first decide what is the definition of infrastructure? if we can all decide that, then we can work on what the need is and how to -- and what we need to spend. that was productive and i felt coming out that's where we were ending up.
4:26 pm 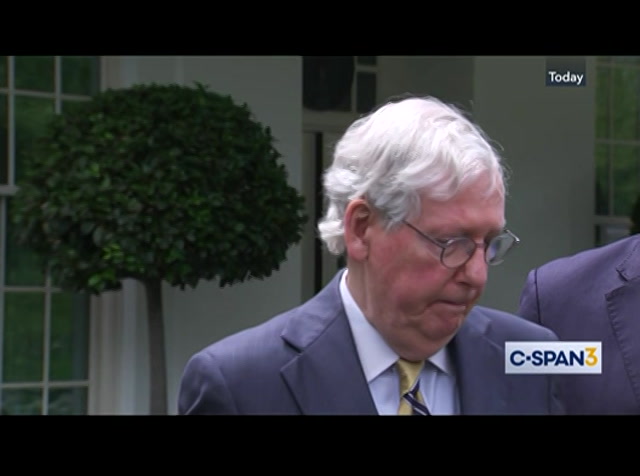 >> yeah. we're not interested in reopening the 2017 tax bill. we both made that clear to the president. that's our red line. we believe that in february of 2020, we had the best economy we've had in 50 years. we believe that was a major reason for it. and so from my perspective, this discussion about the way forward on infrastructure will not include revisiting the 2017 tax bill. >> you know why you get the question? because you married a girl from bakersfield, who is fabulous, by the way. >> that is true. we know -- >> you definitely married up, but go ahead. >> i did. >> we know that the president spends a lot of time on infrastructure with you guys today. are you satisfied that he's spending enough time, because we don't really hear him talking about the border, the crisis in
4:27 pm 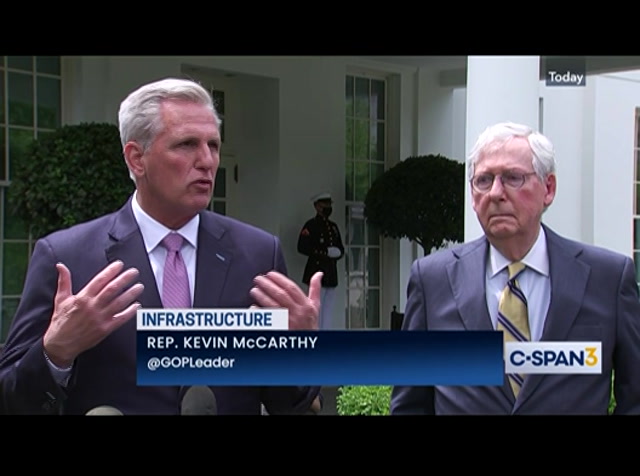 the middle east, the gas supply issues right now, is he spending enough time, is he -- are you satisfied with the leadership on those issues? >> i thought the meeting today was productive and i know he wanted to have the meeting on infrastructure but i want to take the opportunity to talk about the concerns i'm hearing around the country. from affordability, the price of gas, the crisis at the border that's coming every single day. the ability to get people to go back to work. the incentive to go back. and the schools. the millions of kids who are not back at school. these are the concerns i'm hearing every day. so i took the opportunity to raise those with the president. the president engaged on those topics. i would like to have more. i'd like to see only action on that. i'm very concerned with what's happening in israel. the president, we did touch on that at the beginning, he brought that up. i commended the president for his comments yesterday, israel's ability to defend themselves and they should be. >> let me add just one thing on the issue of inflation and
4:28 pm 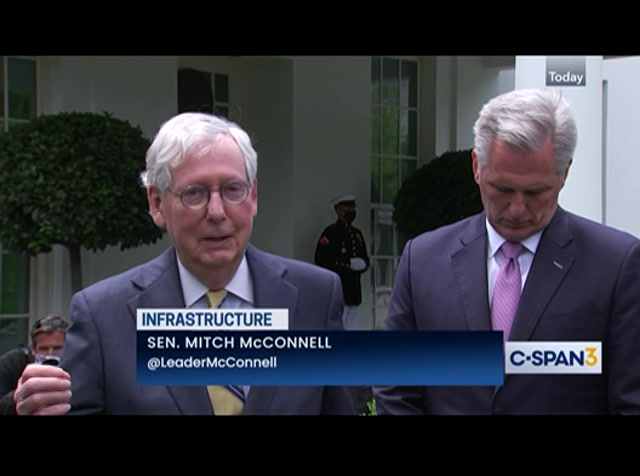 getting people back to work. what i did last week was to have roundtables with businesses of all sizes, including hospitals, said, what's your biggest problem? number one, they can't get people to come back to work and number two, inflation. exactly the same thing kevin and others are hearing around the country. i think that's a direct result of flooding the zone with an extraordinary amount of money. i will say this, there's great excitement at state government and local counties, they've never seen anything like what's headed their way with this mountain of money that's coming in. hopefully we can capture some of that to make this infrastructure package go forward in a way that everybody would like to see it go forward. >> bottom line, based on what you heard from the president today, are you more optimistic
4:29 pm 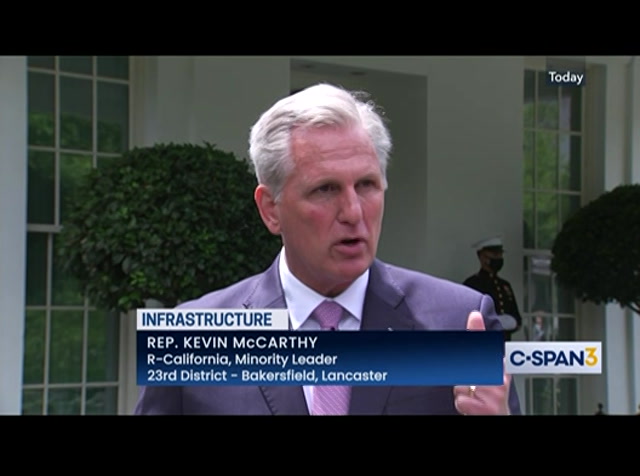 about the prospect of working with this white house, particularly on infrastructure or less? >> no, i think there's an opportunity that we can work together on infrastructure. now, let me preface that. as long as there's not anything about tax increases and it dealing with infrastructure that we start with the concept, what is the definition? and that we're able to make reforms so you can actually build the roads, not decades away. that you modernize the law from the 1970s so money, roads gets built, they get faster. but what i really want to work on is making sure turning this economy around, getting people back to work, back to school, back to health and back to normal. i believe in the vaccine, that's why i'm not wearing a mask. i want people back in school. the other thing, too, you have to understand, those numbers we heard today on inflation, that should terrify every american. because it's not a question or whether there's going to be a tax increase, you just had the biggest tax increase you've had in more than ten years and it hit you already.
4:30 pm

and for those who have lower income is getting it harder. that's why we have to get the economy moving again and stronger. and stop this inflation and part of what congress has recently done, by spending those trillions of dollars, is the wrong action to take in the economy we have today that you could propel inflation even greater, make people's money worth less, the affordability -- affordability is more difficult. those are the things i want to discuss and correct and also -- all right, last question. >> are you concerned about your future in leadership given you protected cheney for so long and then -- [ inaudible ] >> not at all. >> you're not concerned at all? >> i'm looking forward to being speaker in the next congress. thank you very much. presidential enjoy for climate john kerry went in front of the house foreign affairs committee to
left
right
Borrow Program
tv

Senate and House Minority Leaders spoke to reporters about their meeting with President Biden. Sen. Mitch McConnell (R-KY) and Rep. Kevin McCarthy (R-CA), both signaled that the red line for Republicans regarding a way forward on infrastructure involves taxes.