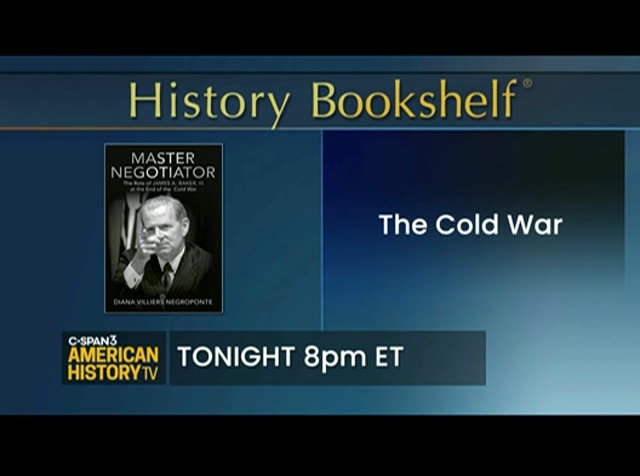 the author talks about her book "master negotiator." it talks about how james baker worked to create what president george h.w. bush called a new order, as the soviet union collapsed. new international relationships emerged between 1989 and 1992. watch tonight beginning at 8:00 p.m. eastern and watch american history tv every weekend on c-span3. ♪♪ ♪♪
3:57 pm 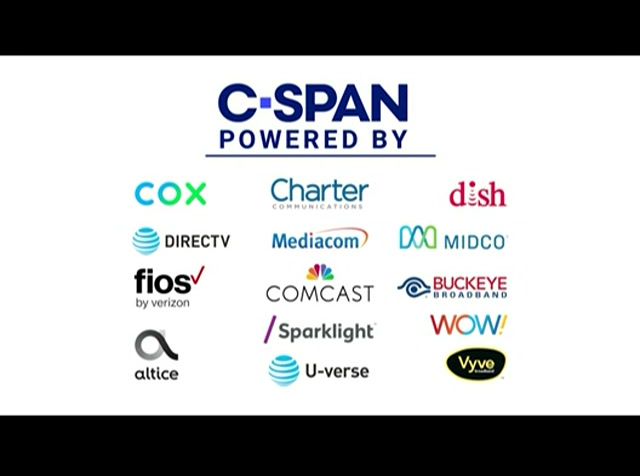 mrs. eisenhower, your excellencies, friends of dwight david eisenhower, america and throughout the world, we gather today in mourning but also in gratitude. we mourn dwight eisenhower's death, but we are grateful for his life. we gather also conscious of the fact that in paying tribute to dwight eisenhower, we celebrate greatness. when we think of his place in history, we think inevitably of the other giants of those days of world war ii. and we think of the qualities of greatness and what his were that made his unique among all.
3:58 pm 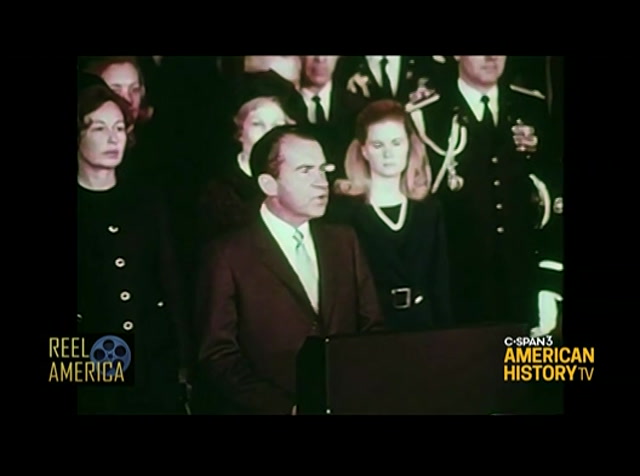 once, perhaps without intending to do so, he himself put his finger on it. it was 1945 shortly after b.e. day at a ceremony in the guild hall. a supreme commander of the allied forces in europe was officially given the freedom of the city of london. in an eloquent address that day, dwight eisenhower said, i come from the heart of america. ♪♪ >> he did come from the heart of america. not only from its geographical heart but from its spiritual heart. dwight eisenhower touched
3:59 pm 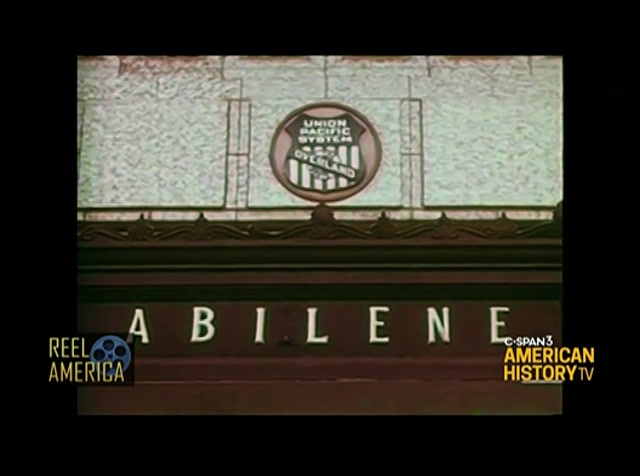 something fundamental in america which only a man of immense force of mind and spirit could have brought so vibrantly alive. he was a product of america's soil and of its ideals given by a compulsion to do right and to do well. a man of deep faith who believed in god and trusted in his will. a man who knew his country and for whom words like freedom and democracy were not cliches. he exemplified what millions of parents hoped their sons would be, strong and courageous and honest and compassionate. and with his own great qualities at heart, he personified the best in america. ♪♪ >> his great love of people was rooted in his faith.
4:00 pm 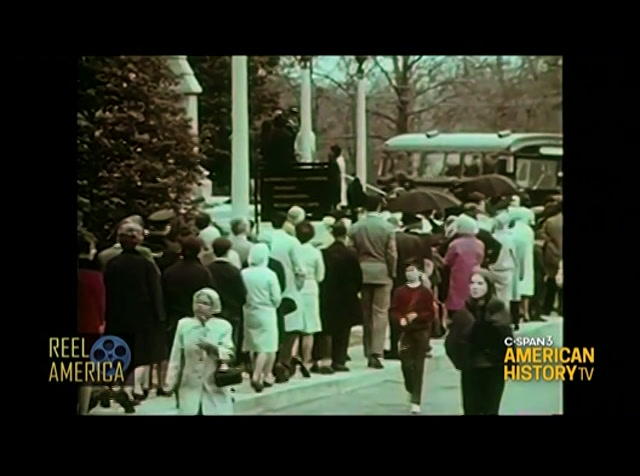 he had a deep faith in the goodness of god and the essential goodness of man as a creature of god. it is, i think, a special tribute to dwight eisenhower that despite all of his honors, despite all of his great deeds and his triumphs, we find ourselves today thinking first not of his deeds but of his character. ♪♪ ♪♪
4:01 pm 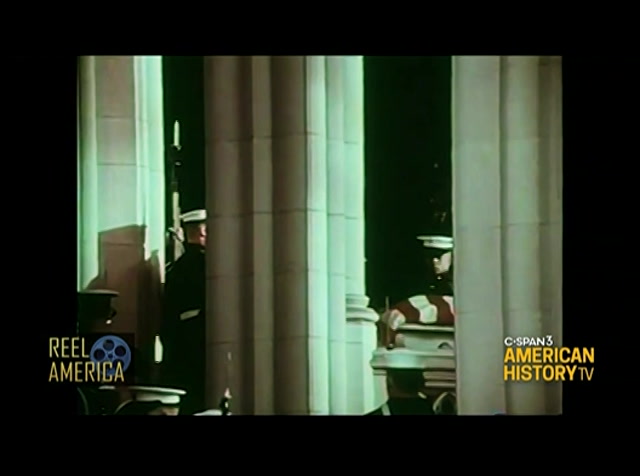 ♪♪ ♪♪ >> dwight eisenhower was that rarest of men, an authentic hero. wars bring the name of many men in the headlines, and of those, some few become national or even
4:02 pm 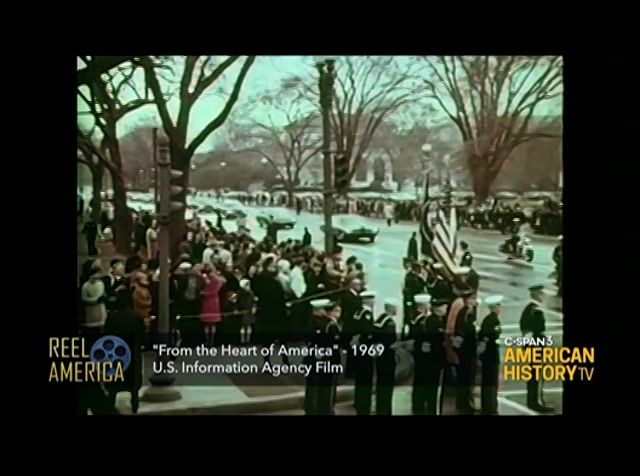 international heroes. but as the years pass, their fame goes down. but not so with dwight eisenhower. as the years passed, his stature grew. commander of the mightiest expeditionary force ever assembled, receiver of the surrender of the german armies in world war ii, president of columbia university, supreme commander of nato, 34th president of the united states. the honors, the offices were there in abundance. every trust that the american people had it in their power to bestow, he was given.
4:03 pm 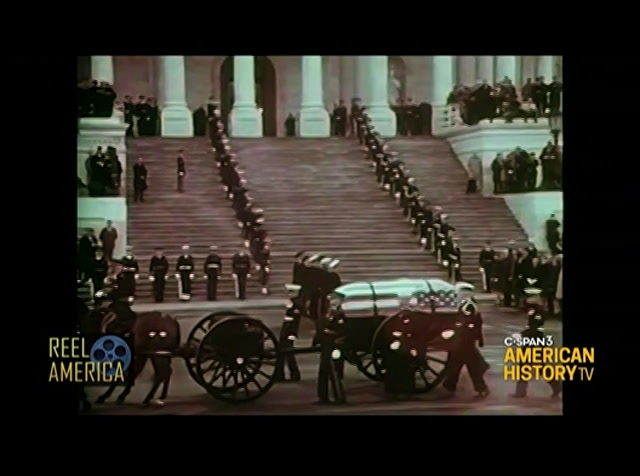 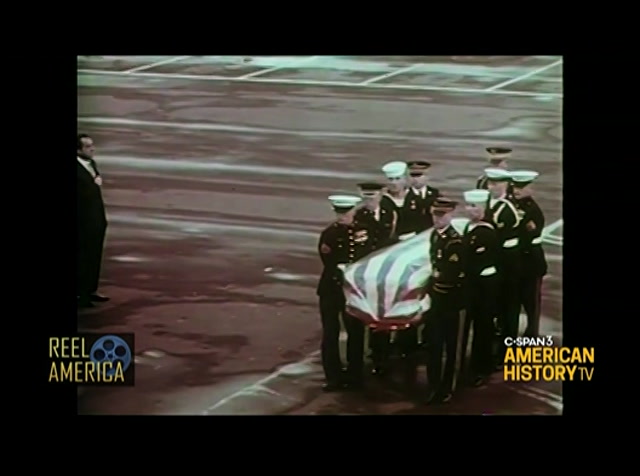 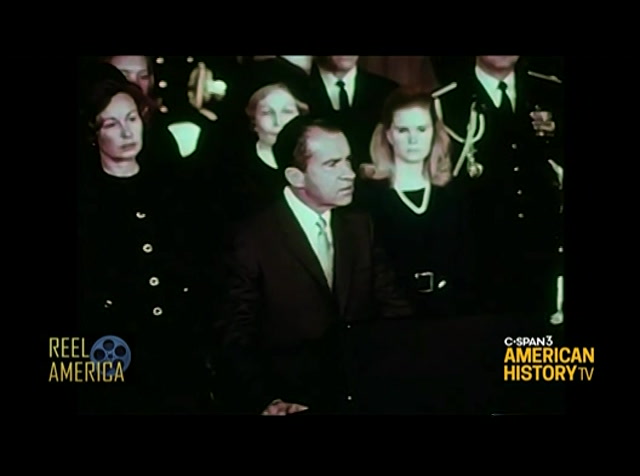 >> each of us here will have a special memory of dwight eisenhower. i can see him now standing erect, straight, proud and tall 16 years ago as he took the oath of office as a 34th president of the united states of america. and yet he always retained a saving humility. his was the humility not of fear but of confidence. he walked with the great of the world and he knew that the greater human, his was the humility of man and before the god and the truth.
4:06 pm 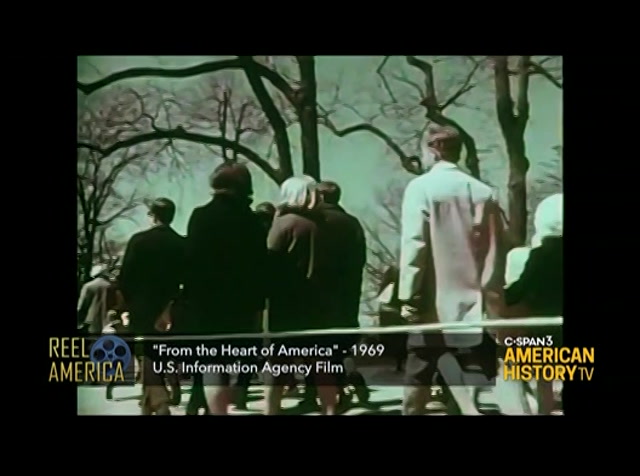 his was the humility of a man too proud to be arrogant. he restored calm to a divided nation. he gave americans a new measure of self-respect. he invested his office with dignity and respect and trust. he made americans proud of their president, proud of their country, proud of themselves. and if we in america were proud of dwight eisenhower, it was partly because he made us proud of america. he came from the heart of america. and he gave expression to the heart of america, and he touched the hearts of the world. many leaders are known and respected outside their own countries. very few are loved outside their own countries.
4:07 pm 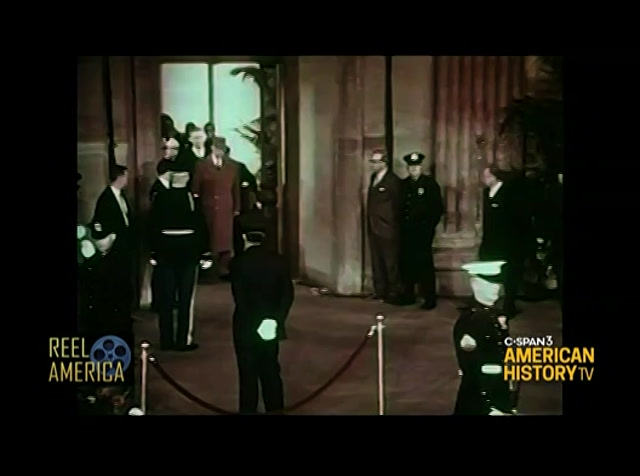 dwight eisenhower was one of those few. he was probably loved by more people in more parts of the world than any president america has ever had. he captured the deepest feelings of free men everywhere. ♪♪ ♪♪
4:08 pm 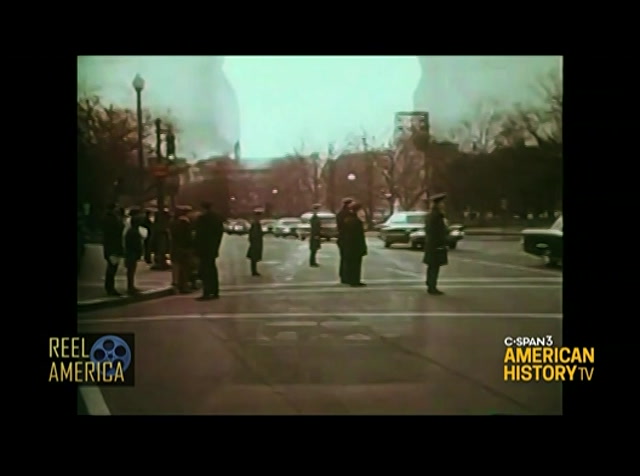 >> some men are considered great because they lead great armies or they lead powerful nations. for eight years now, dwight eisenhower has neither commanded an army nor led a nation. and yet he remained through his final days the world's most admired and respected man. truly the first citizen of the world. so today we render our final salute. it is a fond salute to a man we loved and cherished.
4:09 pm 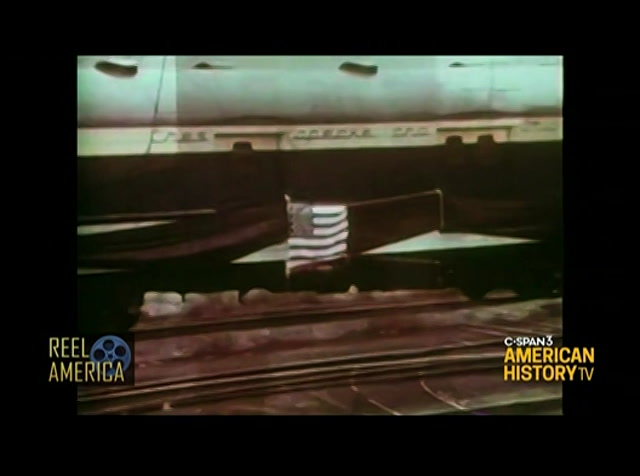 it is a grateful salute to a man whose whole extraordinary life was consecrated to service. to a man larger than life, who by any standard was one of the giants of our time. ♪♪ >> his life reminds us that there is a moral force in this world more powerful than the
4:10 pm 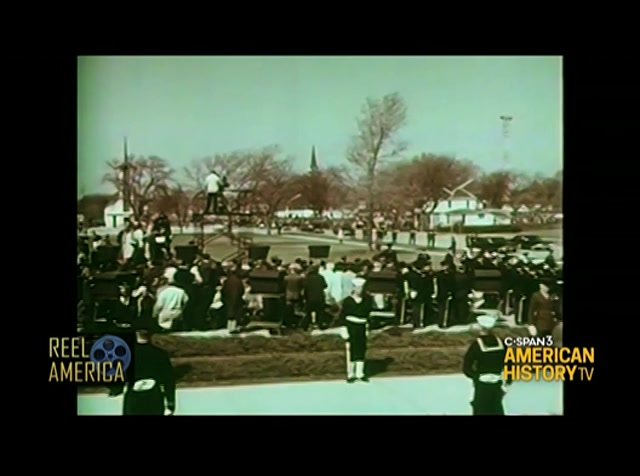 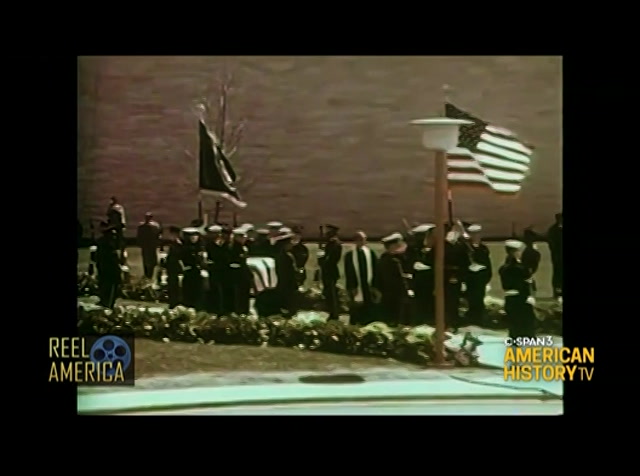 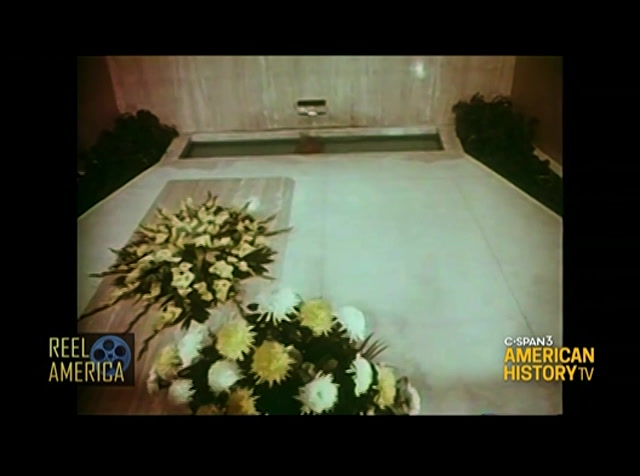 and i have always loved my country. that was dwight eisenhower. ♪♪
4:13 pm 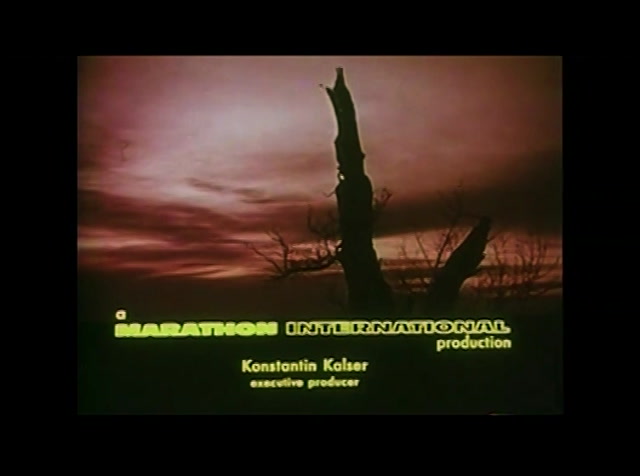 ♪♪ weeknights this month, we're featuring american history tv programs as a preview of what's available every weekend on c-span3. tonight we look at the cold war. diana villiers la ponte talks about her book "master negotiator." it looks at how james baker, secretary of state, worked to create what george h.w. bush called a new world order as the soviet union collapsed and new relationships emerged between 1989 and 1992. watch tonight beginning at 8:00 p.m. eastern and watch american history tv every weekend on
4:14 pm 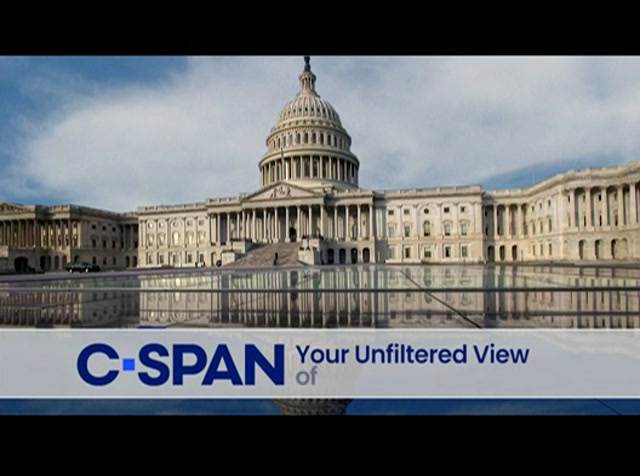 c-span3. we're funded by these television companies and more, including charter communications. >> broadband is a force for empowerment. that's why charter has invested millions building infrastructure, empowering opportunity in communities big and small. charter is connecting us. >> charter communications supports c-span as a public service, along with these other television providers giving you a front-row seat to democracy. general dwight d. eisenhower ordered that the horrors of the holocaust be documented as world war ii came to an end, determined that the evidence be preserved for future generations. it was a signature move by the man who later occupied the white house. next, on the presidency, his
left
right
Borrow Program
tv

Using excerpts from President Richard Nixon's eulogy, this film documents the funeral services of former President Dwight D. Eisenhower. He died on March 28, 1969. The film includes scenes of the funeral caisson on Constitution Avenue, services in the U.S. Capitol Rotunda and Washington National Cathedral, and the funeral train from Washington, D.C. to Ike's boyhood home and final resting place in Abilene, Kansas.