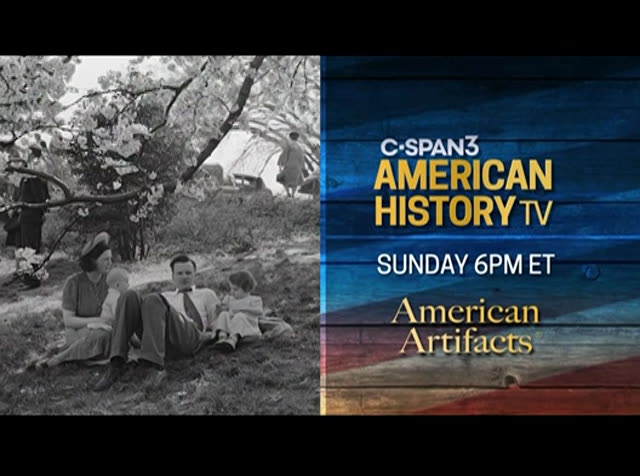 every weekend. thousands of people visit washington for the annual blooming of the cherry blossoms. we'll look at the history of the cherry trees and the washington, d.c. tidal basin, an area that once used as a swimming hole, a protest ground and the scene of a political ground. and sunday, a behind the scenes tour of the harry s. truman presidential library and museum in missouri. hear about several new exhibits telling the life story of the 33rd president. watch american history tv, sunday on c-span3. on april 17th, 1961, a group of about 1500 cuban exiles supported by the cia landed on the southern coast of the island nation at the bay of pigs. their goal was to spearhead a popular uprising and overthrow the government of fidel castro. within two days, the operation failed. on april 20th, 1961, president
9:33 pm 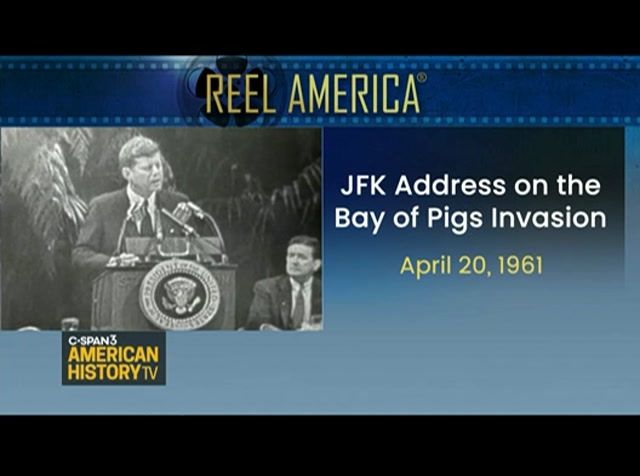 kennedy spoke before a meeting of the american society of newspaper editors in washington, d.c., and outlined his policy towards cuba and fidel castro. >> ladies and gentlemen, the president of the united states. [ applause ] >> members of the american society, newspaper editors, ladies and gentlemen, the president of a great democracy, such as ours, and the editors of great newspapers such as yours, owe a common obligation to the people. an obligation to present the
9:34 pm 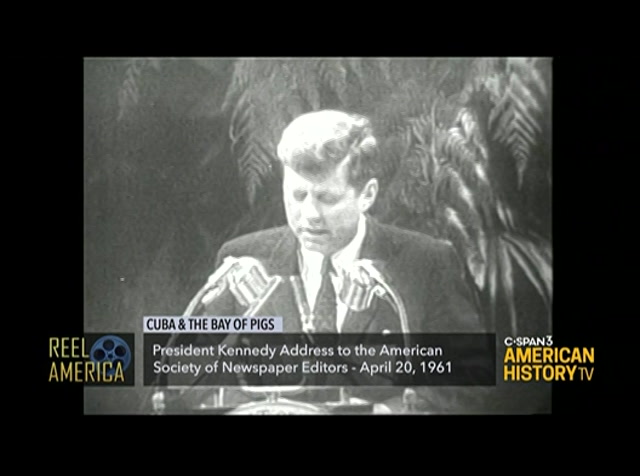 facts. to present them with candor and to present them in perspective. it is, with that obligation in mind, that i decided within the last 24 hours, to discuss briefly at this time the recent events in cuba. on that unhappy island, as in so many other arenas of the contest for freedom, the news has grown worse instead of better. i have emphasized before that this was a struggle of cuban patriots against a cuban dictator. while we could not be expected to hide our sympathies, we made it repeatedly clear that the armed forces of this country could not intervene in any way. any unilateral american intervention, in the absence of an external attack upon ourselves, pour an ally, would
9:35 pm 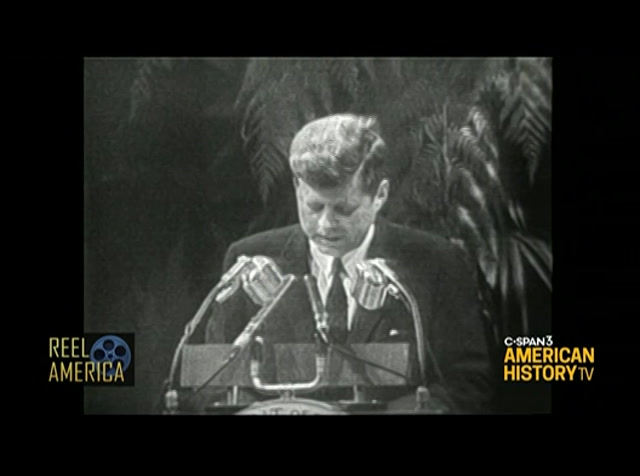 have been contrary to our traditions, and to our international obligations. but let the record show that our restraint is not inexhaustible. should it ever appear that the interamerican doctrine of noninterference nearly conceal or excuses a policy of nonaction, if the nations of this hemisphere should fail to meet their commitments against outside communist penetration, then i want it clearly understood that this government will not hesitate in meeting its primary obligation, which are the security of our nation. [ applause ] should that time ever come, we do not intend to be lectured on
9:36 pm 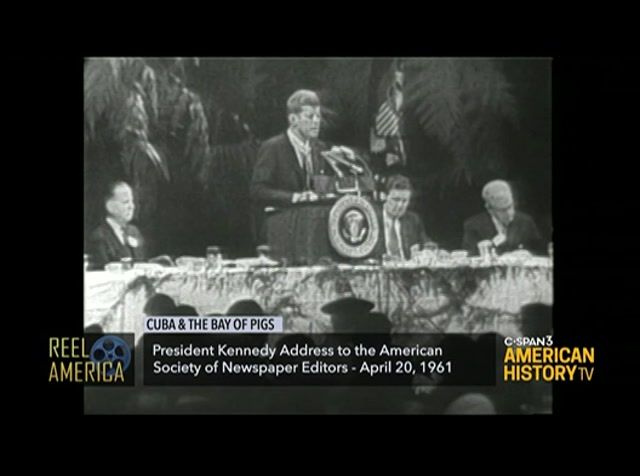 intervention by those whose character was staffed all times of the bloody streets. [ applause ] nor would we expect or accept the same outcome, with this small band of gallant cuban refugees must have known that they were chancing, determined as they were against heavy odds, to pursue their courageous attempts to regain their island's freedom. but cuba is not an island unto itself. and our concern has not ended by mere expressions of nonintervention or regress. this is not the first time, in either ancient or recent history, that a small band of freedom fighters has engaged
9:37 pm 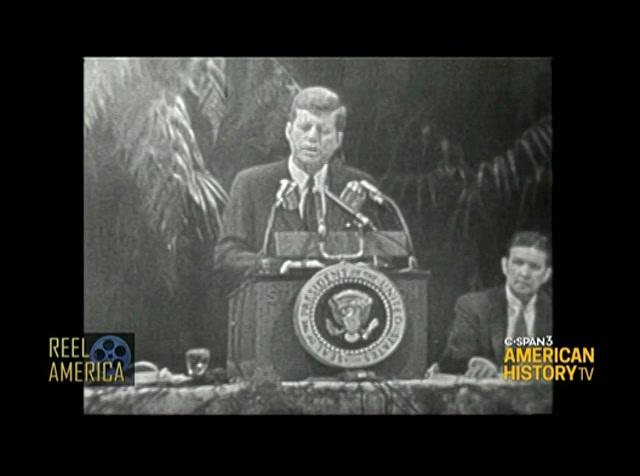 against totalitarianism. it is not the first time communist tanks have rolled over gallant men and women fighting to redeem the independence of their homeland. nor is it the final episode in the eternal struggle of liberty against tyranny, anywhere on the face of the globe, including cuba itself. mr. castro has said these were mercenaries. according to press reports, the final message to be relayed from the refugee forces on the beach, came from the rebel commander, when asked if he wished to be evacuated. his answer was, i will never leave this country. that is not the reply of a mercenary. he has gone now to join in the mountains, countless other guerrilla fighters who are equally determined that the dedication of those who gave their lives shall not be forgotten, and that cuba must
9:38 pm 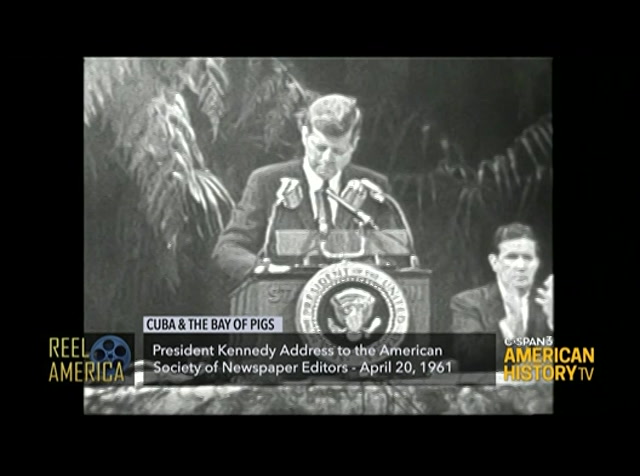 not be abandoned to the communists, and we do not attend to abandon it either. [ applause ] the cuban people have not yet spoken their final piece. and i have no doubt that they, and the revolutionary counsel, led my dr. cadona, and i am informed by the doctor yesterday, are involved themselves in the island and will continue the speak up for a free and independent cuba. meanwhile, we will not accept mr. castro's attempts to blame this nation for hatred which is one time supported, now regard his repression. but there are from the sobering episodes, useful lessons for us all to learn. some may be still obscure. and await further information.
9:39 pm 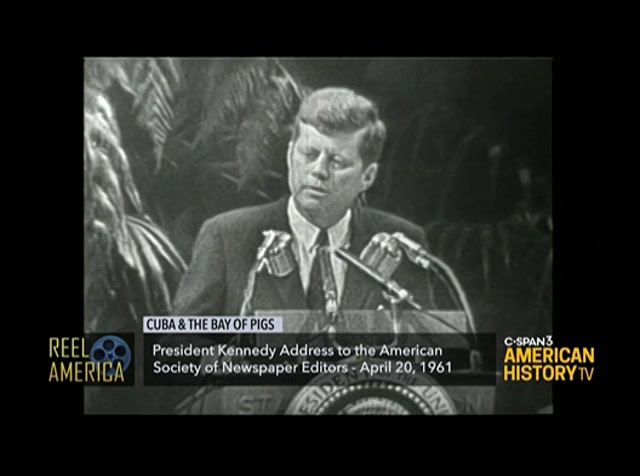 some are clear today. it is clear that the forces of communism are not to be underestimated in cuba or anywhere else in the world. the advantages of a police state, its use of mass terror to prevent the spread of free dissent, cannot be overlooked by those who expect to fall of every fanatic tyrant. if the self-discipline of the free cannot match the fist in economic, scientific, and all the other kinds of struggle, as well as the military, then the perils of freedom will continue to rise. secondly, it is clear that this nation, in concert with all the free nations of this hemisphere must take an ever closer look at the menace of external communist
9:40 pm 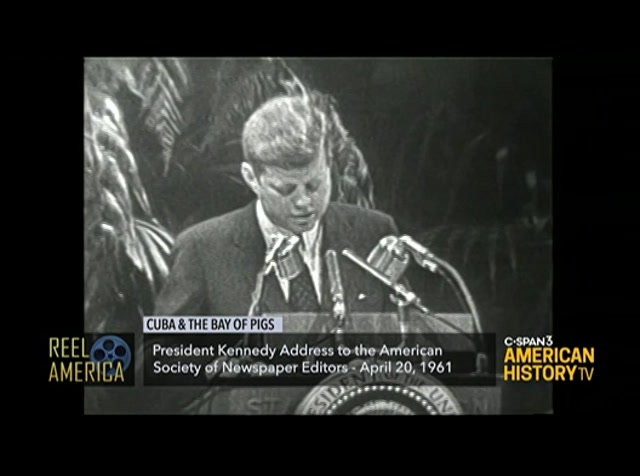 intervention and domination in cuba. the american people are not complacent about iron curtain tanks and planes less than 90 miles from their shore. but a nation of cuba's size is less a threat to our survival than it is a base for subverting the survival of other free nations throughout the hemisphere. it is not primarily our interest or our security, but theirs, which is now today in the greater peril. it is, for their sake, as well as our own, that we must show our will. the evidence is clear, and the hour is late. we and our latin friends will have to face the fact that we cannot postpone any longer the real issue of survival of freedom in this hemisphere itself. on that issue, unlike some others, there can be no middle
9:41 pm 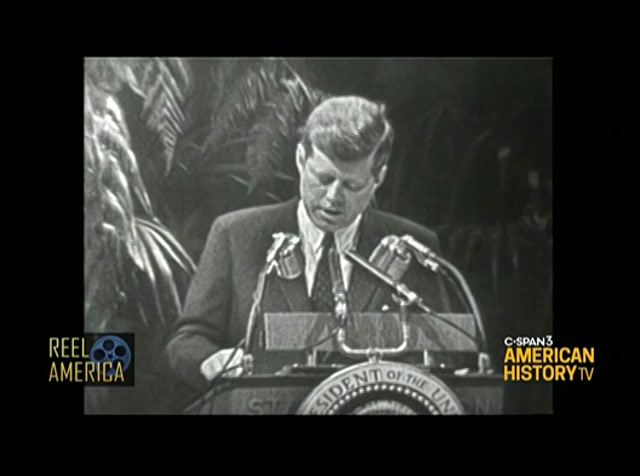 ground. together, we must build a hemisphere where free throw dom can flourish. and where any free nation, under outside attack of any kind, can be assured that all of our resources stand ready to respond to any requests for assistance. third and finally, it is clearer than ever, that we face a relentless struggle in every corner of the globe that goes far beyond the clash of armies, or even nuclear arment. the armies are there, and in large number. the nuclear arments are there. but they serve primarily as the shield behind which subversion, infiltration, and a host of other tactics steadily advance. picking off vulnerable areas one by one in situations which do
9:42 pm 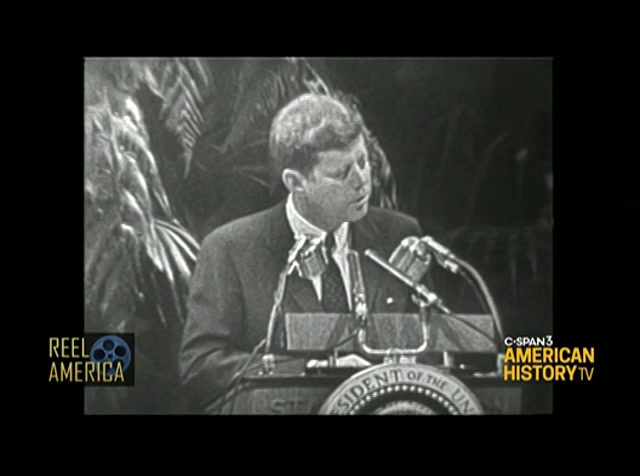 not permit our owned armed intervention. power is the hallmark of this offensive. power and discipline and deceit. the legitimate discontent of yearning people is exploited. the legitimate trappings of self-determination are employed. but once in power, all talk of discontent is repressed. all self-determination disappears. and the promise of a revolution of hope is betrayed. as in cuba, and a reign of terror. over the efforts of a small group of young cubans, to regain their freedom, should recall the long roll call of refugees who cannot now go back, to hungary, to north korea, to north
9:43 pm 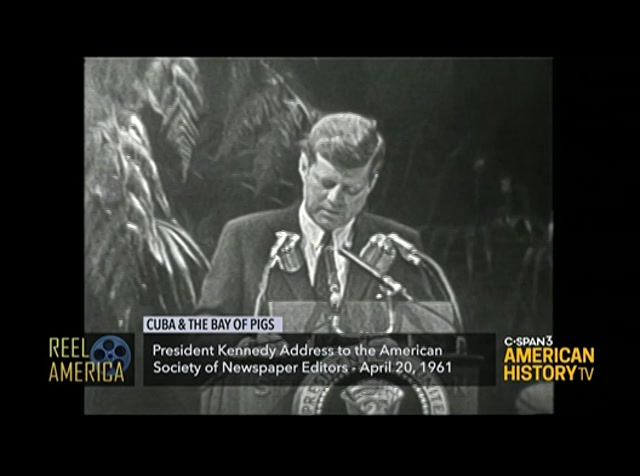 vietnam, to east germany, or to poland, or to any of the other lands from which a steady strem of refugees pours forth. in eloquent testimony of the cruel oppression now holding sway this their homeland. we dare not fail to see the insidious nature of this new and deeper struggle. we dare not fail to grasp the new concept, the new tools, the new sense of urgency we will need to combat it, whether in cuba or south vietnam. and we dare not fail to realize that this struggle is taking place every day without fanfare, in thousands of villages and markets day and night, and in classrooms all over the globe. the message of cuba, of the
9:44 pm 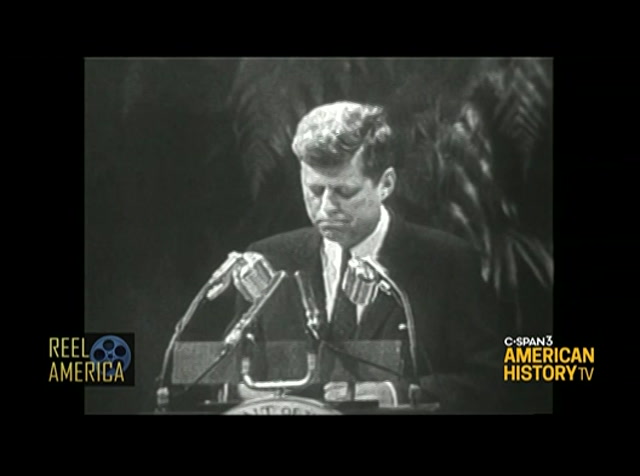 rising den of communist voices in asia and latin america, these messages are all the same. the complacent, the self-indulgent, are about to swept away with the debris of history. only the strong, only the industrious, only the determined, only the courageous, only the visionary who determine the real nature of our struggle, can possibly survive. no greater task faces this country or this administration. no other challenge is more deserving of our every effort and energy. too long we have fixed our eyes on traditional military needs. on armies prepared to cross borders. on missiles poised for flight. now it should be clear that this is no longer enough. that our security may be lost piece by piece, country by
9:45 pm 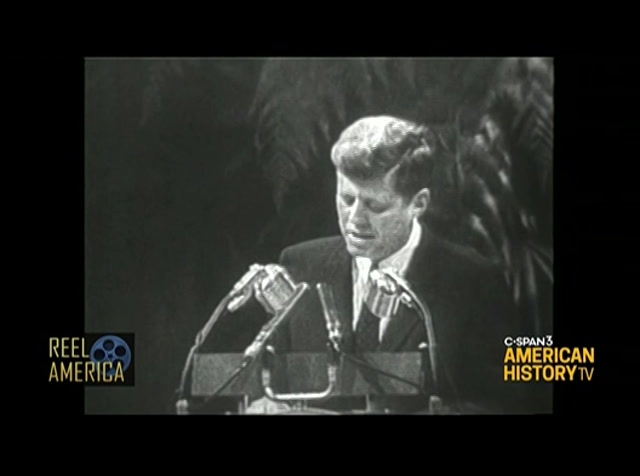 country. without the firing of a single missile, or the crossing of a single border. we intend to profit from this lesson. we intend to re-examine and reorient our forces of all kinds. our tactics and our institutions here in this community. we intend to intensify our efforts for a struggle in many ways more difficult, where disappointment will off accompany us. for i am convinced that we, in this country and in the free world, possess the necessary resources and the skill, and the added strength that comes from a belief in the freedom of man. and i am equally convinced that history will record the fact that this bitter struggle reached its climax in the late 1950s and the early 1960s.
9:46 pm 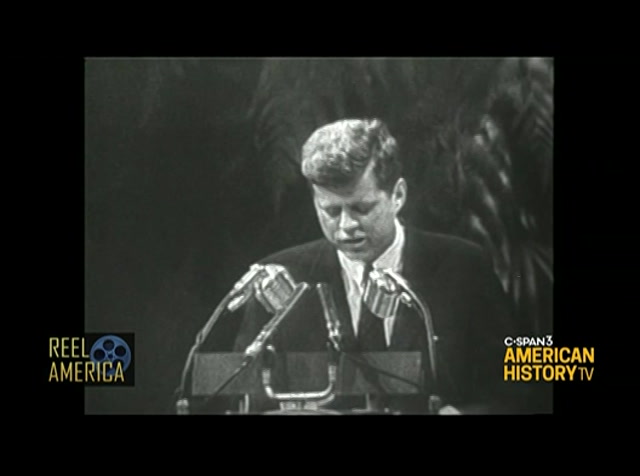 let me then make clear as president of the united states, that i am determined upon our system's survival and success, regardless of the cost, and regardless of the peril. [ applause ] >> >> each night this month, we're featuring american history tv. friday, an evening of programs on baseball, including historian david patrusha, who talks about the 1919 world series fix by the white sox by came to be known as the black sox scandal.
9:47 pm 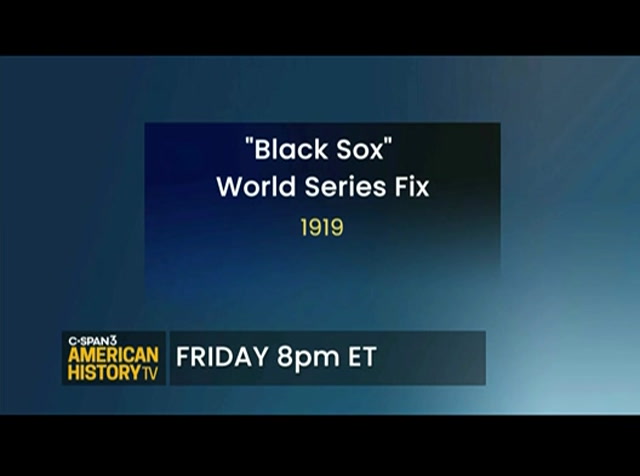 President Kennedy spoke to the Society of Newspaper Editors about events in Cuba, which later became known as the Bay of Pigs Invasion. He emphasized that Cuban "patriots" had taken up arms against Fidel Castro's Revolutionary Government and that the U.S. armed forces were not involved, despite sympathizing with their cause. He also talked about the greater threat of global communist expansion and the American role in resisting such expansion.