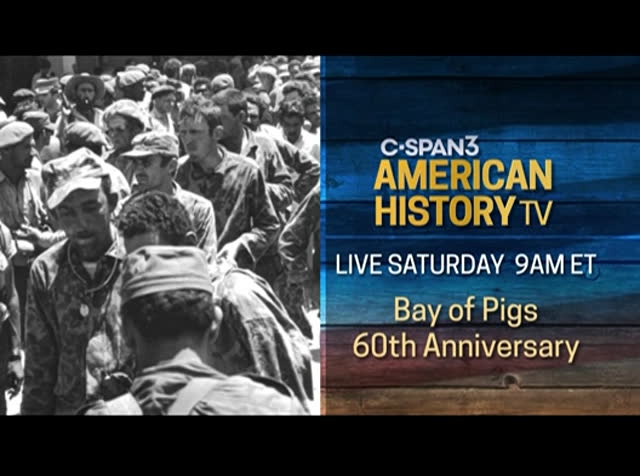 exiles launched a failed invasion to overthrow fidel castro's communist government in cuba at the bay of pigs. live, saturday at 9 am eastern on american history tv and washington journal. we will look back at the invasion and its consequences with former cia historians, nicholas doom of. itch sunday at 4 pm eastern on real america, or films on u.s. cuba relations, a version of the 1961 nbc report, cuba, bay of pigs. president john f. kennedy's 1961's speech after the failed invasion. a compilation of universal news reels from 1959 to 1961 on the cuban revolution through the bay of pigs of asian. and in the 1960 broadcast, cuba, the battle of america. exploring the american story, watch american history tv this weekend on c-span three.
7:48 pm 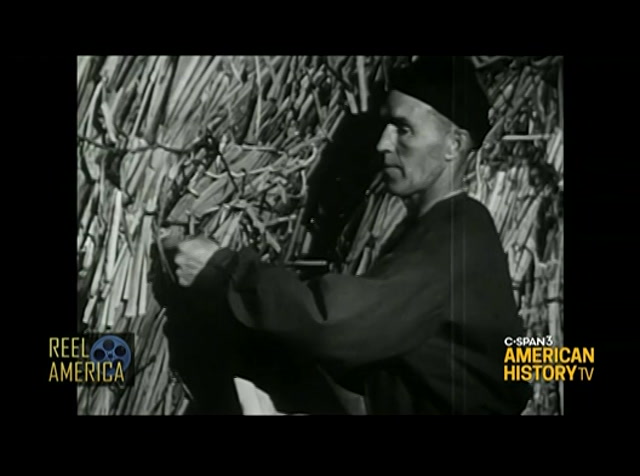 it is 1626. along the new england coast there are several new settlements. it's a small community, nothing scares me more than 30 people. robert cramped here is a fisherman. built this barked way guam with albert sims and jason conway. there are a few women. the beds are hung up lightly every morning but the fire is dining out. it's a rare occurrence over at the fox dugout nearby, morning tests are likewise underway. mr. fox is hearing something -- that has to be done in carving a home out of the wilderness. she is grinding
7:49 pm 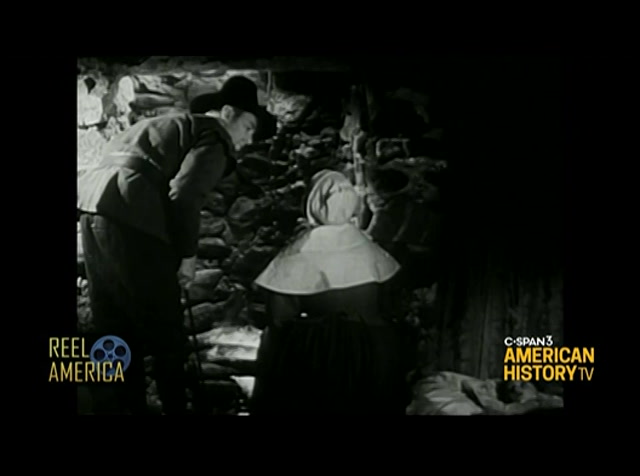 indian corn. a food important to all the settlers while brother all of a mix the gold, the highly prize possesion from england. and now, jason has laid the new fire and must waddled alive embers to light it. here is at the fox place. >> would there be an ember in your fire, john? >> you will be welcomed do. speak of it to susan. >> settlers shared dangers together and they gladly share comforts to because. >> how is master roberts today? >> very little change. the fever has not reckoned these many days. >> one day, when you are well again, you can hunt gear with jason. >> the fireplace does not always give adequate heat especially when there is
7:50 pm 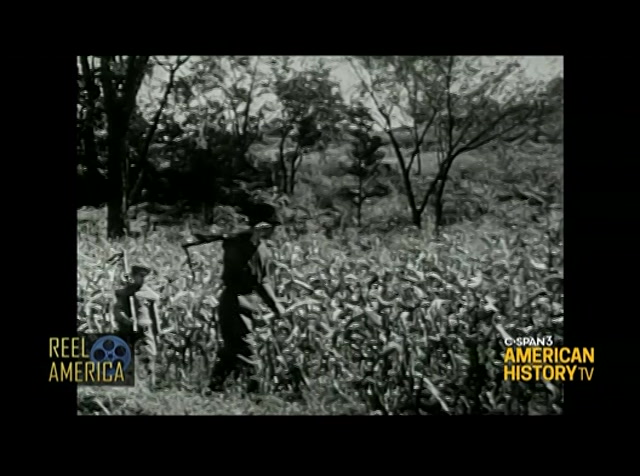 sickness in the house. sickness that may be very serious. today, as always, there is a full schedule of work ahead for the bachelors in the entire community. it is time for mr. fox and all of the settlers to set out to the fields. they are clearing is just over beyond this ridge of rocks. there is a good view of the ocean from the ridge. and mr. fox and all over are glad to see their neighbors hauling in a plenty catch a fish. the settlement will need votes when winter comes. the first corn crop is coming along well. thanks partly to the indians who abandoned some clear land in this parts even before the settlers came. the sound of ripening corn makes john fox feel confident. it makes him eager to clear the grounds for larger panties. it is not easy this clearing of the wilderness. it is not easy removing the stones from the
7:51 pm 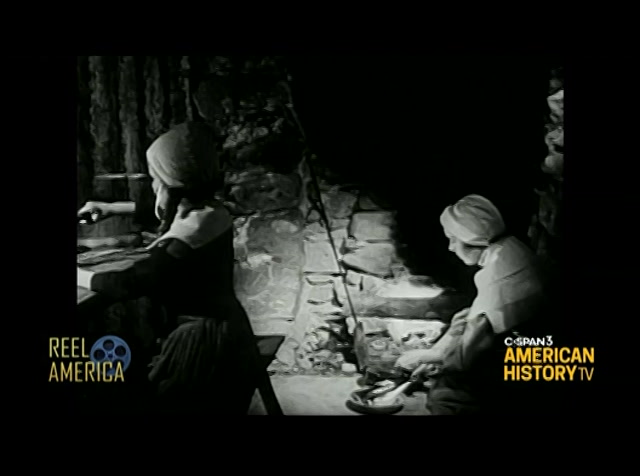 rocky new england soil but it makes a difference when you are building something new. jason here, preparing the roof of the bark wigwam at a far more comfortable house in dorchester, england, but this is a new home in the new land. it makes for a difference quickly. albert sims who harvests and grows his own tobacco, takes much satisfaction in the small crop with the plantations of virginia far down to the coast in the south. thus in the field and in the home and settlers carrying on day in and day out. the scant food supply must be carefully doled out and will -- they are fashioned by hand for candles. even when the long
7:52 pm 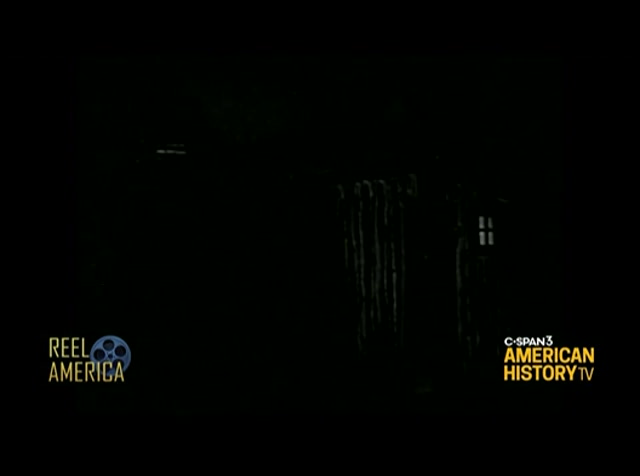 day's work is done, there may be heavy burdens to bear but there is faith and gratitude. >> our father, it has pleased thee to set us upon this shore for thy bountiful providence have grounded us shelter in our daily bread. for all thy many blessings, our hearts are humbly grateful. we beseech the if would be thy will, but in that great mercy, thou will spare this our little son. >> this is the non-of 1606. the waves surge against the shore. three years pass. in 1629, it is now called salem. a number of craftsman from england have joined the growing settlement. these sawers are cutting the
7:53 pm 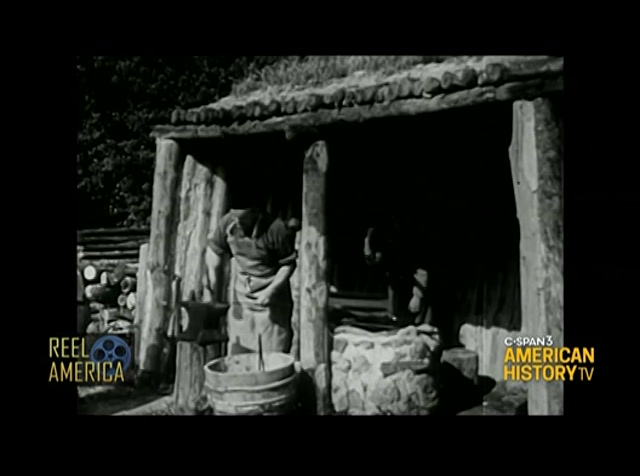 timber of the new england force into strong, straight boards for houses. others are making shingles for some of the better homes. shingles split from logs by hand and shaped by skillful artisans. and here, at the newly built brickworks - than the earth nearby as ground and mix and moist and and then placed. sized and shaped by wooden forms that blocks of clay will be dried in the sun and later hardened. bricks for chimney and fireplace. nearby, the blacksmith beat so for the ever more numerous houses. the iron for the nails and the coal for the board have to be brought from england. i manufacture cannot be accomplished here. even so to the local supply with the added nails. yes, building is going
7:54 pm 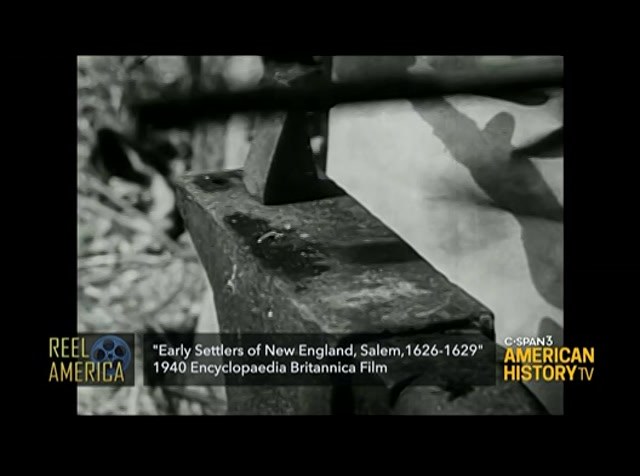 forward here in the expanding settlement. blending practices old and new, materials domestic and foreign, to the purposes of a growing community. it is no longer merely a few delegates and wigwams, buildings have improved. what was an outpost of settlers has become an established village. new buildings, new people, new and increased activity. many other changes growth has brought. it has brought a code of established law and those who break the law. as newcomers have established themselves in
7:55 pm 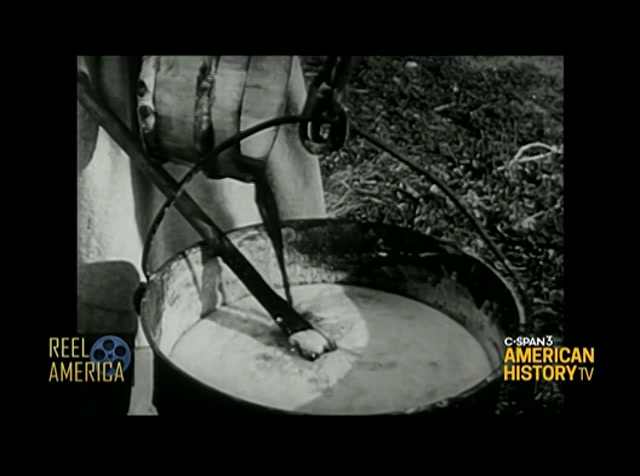 the village, the old settlers have joined with them in many community tasks. here, susan foxx, whose little boy was so ill, is now to prepare a couple of soap. the ingredients she uses our animal fat and prepared from wood ashes. john fox is getting another newcomer lesson in corn planning. following the indian method, he uses fish for fertilizer. now he takes to carefully saved seed corn to place on top of the soil covering the fish. then a little more soil is added. >> it's a matter of planting that the savages have taught us and a good one. >> never have i seen such planting in england. >> it will be many new ways to be learned. many. >> yes, there are new ways to be learned in this new land. the changes in the community however, have made little
7:56 pm 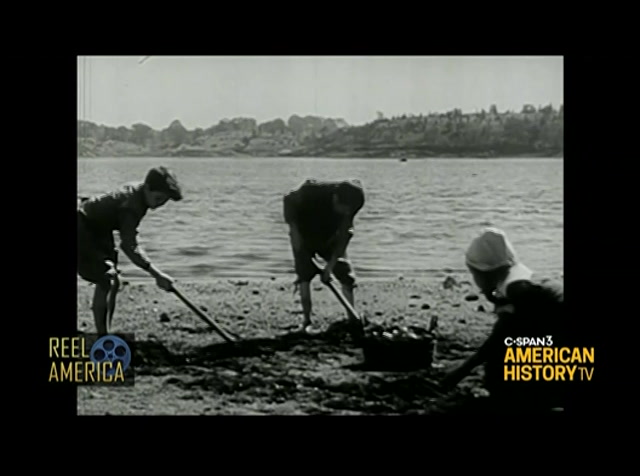 difference to robert. although many of the fish he catches and drives are now shipped to england. digging for clams along the shore. it's still a task for the children. this is a task the children enjoy and one which is very important to settlers who bless their food directly from land and sea. food must be taken from shore and from field, lake and from stream. and there is game to be had in the forest too. john fox has learned well of the nearby forest which harbors many turkeys and brought them abroad. and the gardens of the settlement, medicinal herbs are grown. some of local origin and
7:57 pm 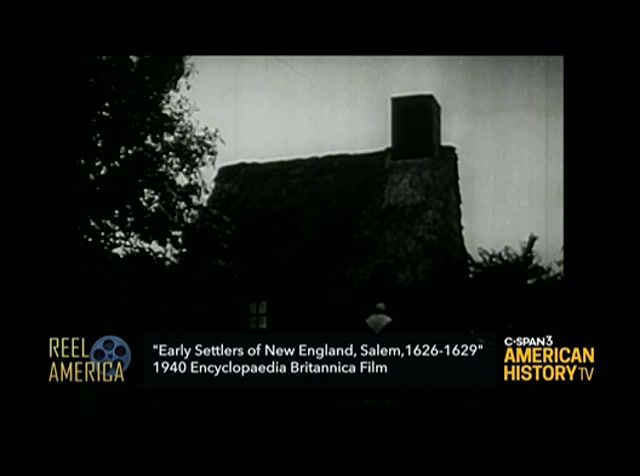 other transported from england. who is skilled in the preparation supervises a selection to be used in a special broth. later, she carries her preparation to a case of serious illness in the home of harold perry. >> here is some herbs freshly brewed. >> it's most timely and welcome. >> yes, there is still sickness and there is still the helpfulness of neighbor towards neighbor. there has to be in a new land where the settlers faced uncertainty of a new way of life. mistress perry knows that building a better world requires courage and faith. and these men, writing back to
7:58 pm 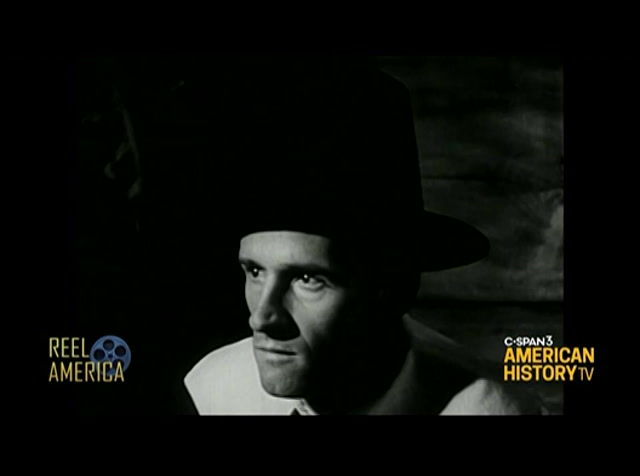 england, they know that too. >> we are sorry to send back the ship without -- that there will be much sickness among us and many numbers lack strength to survive the winter cold. yet, for the most, we remain of good hard and make what haste became to build that plantation. among our number there will be more -- and some seeking gain. yet we formed a one party politic. >> there is resolve and hope and promise here where men still build. here on the shore where men can say, " we form one body politic, joined by common consent ". tonight, mr. johns recalls experiences a u.s. marine during the vietnam war. he talks about his initial reluctance to serve in vietnam, and his journey to meet his unit in the case on.
7:59 pm 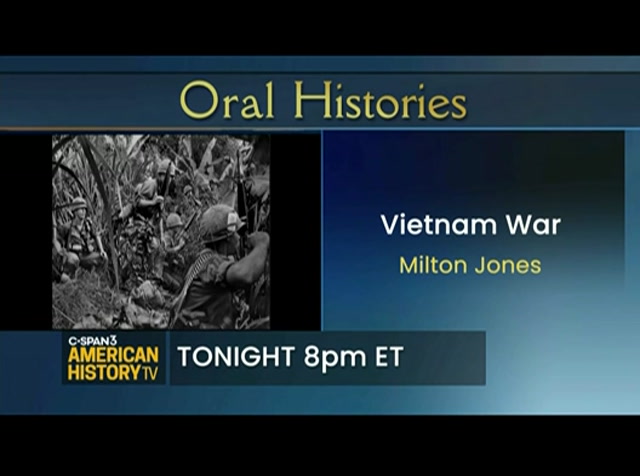 part of the vietnam war oral histories conducted by the atlanta history centers and the research center for the veterans history project. watch tonight beginning at 8 pm eastern and enjoy american history tv every weekend on+++ f
8:00 pm 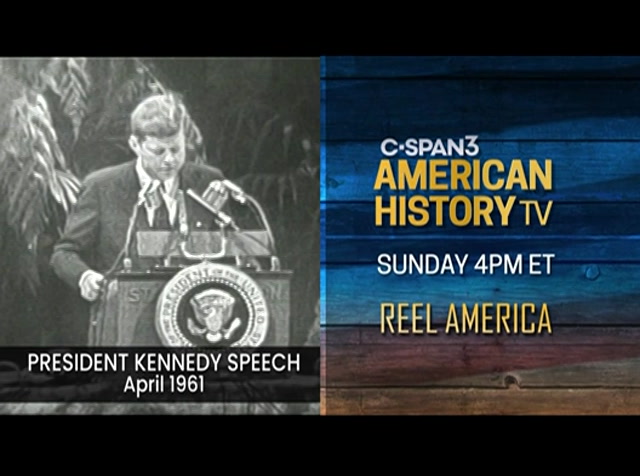 america exploring the american story watch american history tv this weekend on c-span 3 next milton jones recalls his experiences as a us marine during the vietnam war. he talks about his initial reluctance to serve in vietnam and his loan journey to meet his unit in caisson. this interview is part of the veterans history project conducted by the atlanta history center's kenan research center. tell us a little bit about your upbringing. preacher's kid huge family ah great tim a
left
right
Borrow Program
tv

This 1940 classroom film depicts the basics of colonial life, from household cooking and crafts, to farming, fishing, game hunting, and home construction methods.