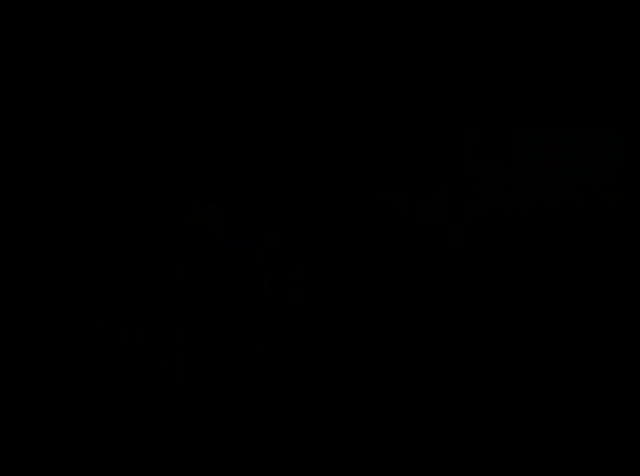 carder, watch tonight beginning at 8:00 p.m. earn. every saturday on 8:00 p.m. eastern, go inside of a different classroom. >> thank you for your patient and for logging into class. >> with more classes closed, watch professors transfer teaching to a virtual setting to egg gauge with their students. >> reagan met him halfway. reagan and couraged him, and he supported him. >> freedom of the press, it was originally called freedom of the use of the press and it is freedom to print things and publish things.
11:02 am 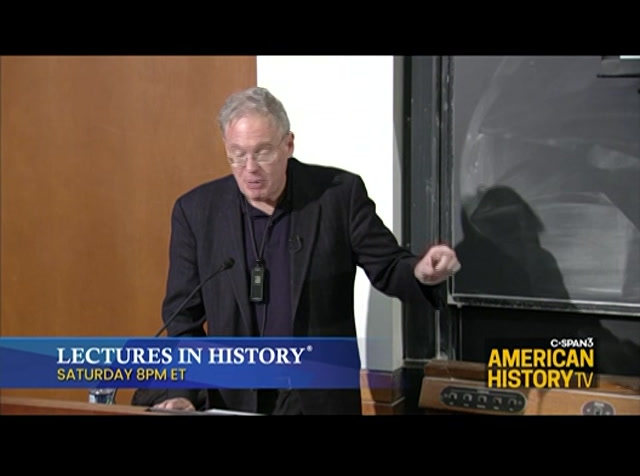 >> lectures in history with american history tv. every saturday at 8:00 p.m. eastern. lectures in history is also available as a pod cast. find it where you listen to podcasts. >> a giant step toward dignity and participation in american life and affairs was taken the american negro in the capitol of the united states on the day of august 28th, 1963.
11:03 am 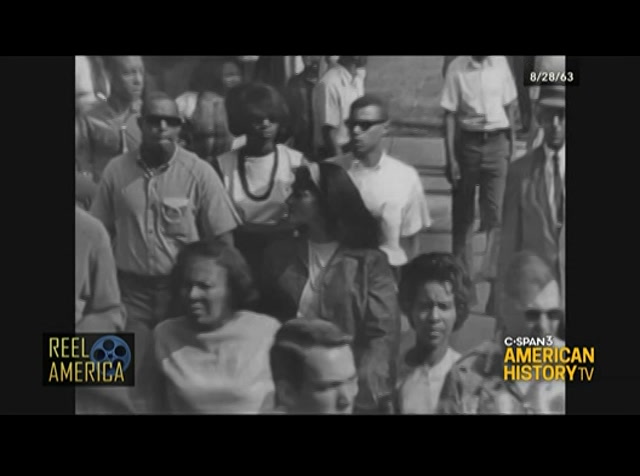 the step was taken in communion with many of their country men.
11:04 am 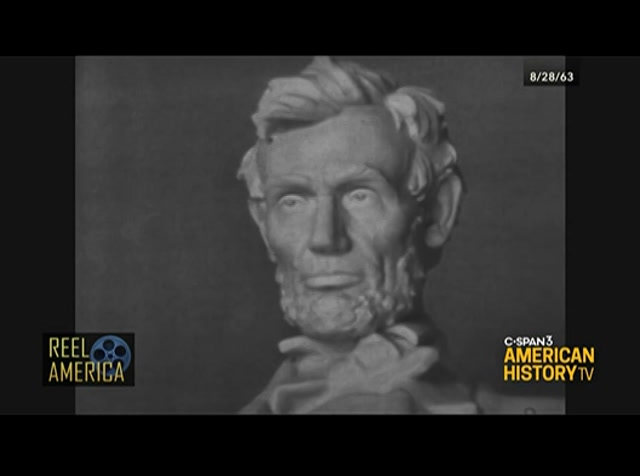 ♪♪ >> the first step of the march in washington was heard with a quiet purpose. it aroused mens to share e kweelly not only the sun and the air so clear and free on the day of their march, but their right to share opportunity and privilege as well.
11:05 am 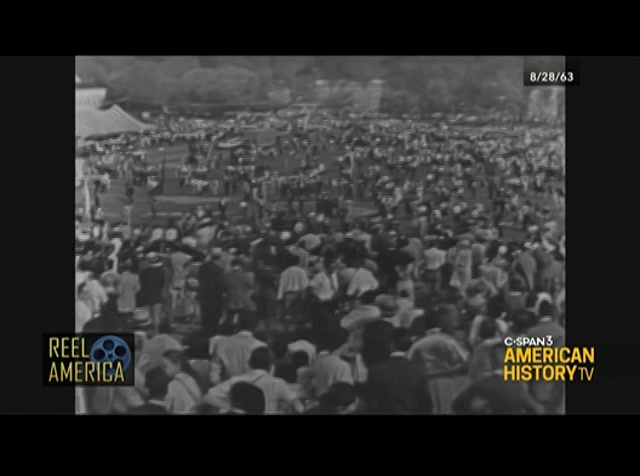 america has been know this for a long time. for 100 years. america learned this emotionally with clarity more penetrating than intellect. if not in the city of ug wa, across television, they continued the feeling of the march and heard the cry. america heard back into the history and everyone attended the march in washington. in this city that has a massive
11:06 am 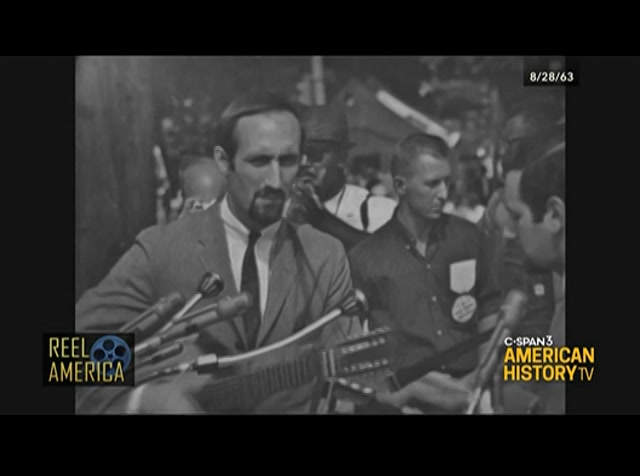 traffic partner, it has been rerounds and acres of space had thousands of visiting demonstrators.
11:07 am 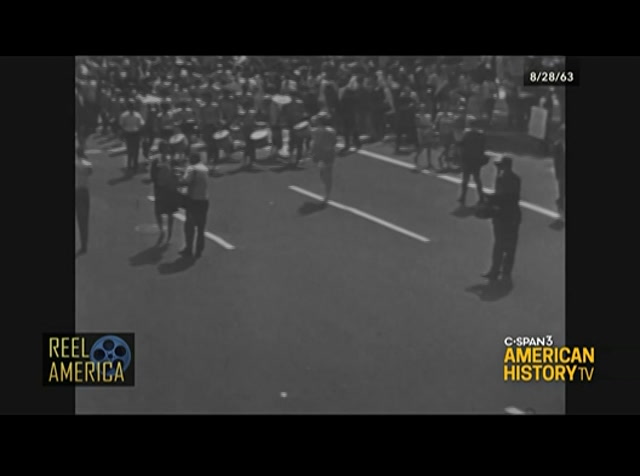 >> momentum of the march began slowly. a mounding tide of children, students, parents, grandparents, they were walking down the wide avenue named in honor of the constitution of the country. no attempt was made or thought given to a strike lines of marching. the mood of the day was serious, but relaxed. 200,000 strong they marched in the largest demonstration for civil rights in the united states.
11:08 am 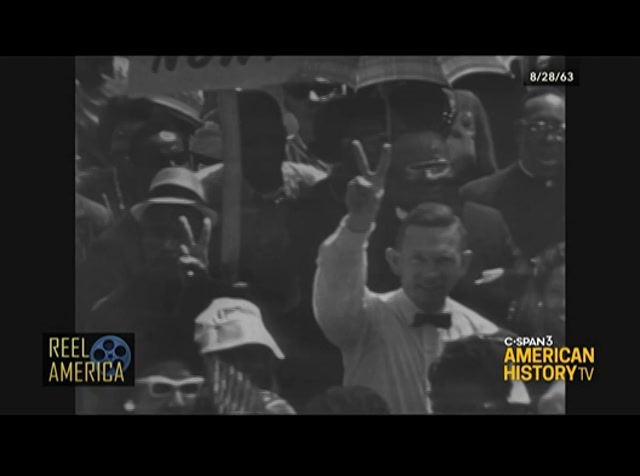 they progressed along the avenue loosely grouped toogt by states or bus loads.p)z7■ some drove price automobiles 30 me honor of abraham lincoln. they walk in a peaceful fashion, their rights. as spelled out in the first amendment of the constitution of the institution. the first amendment requires that the government not only refrain from interference it is
11:09 am 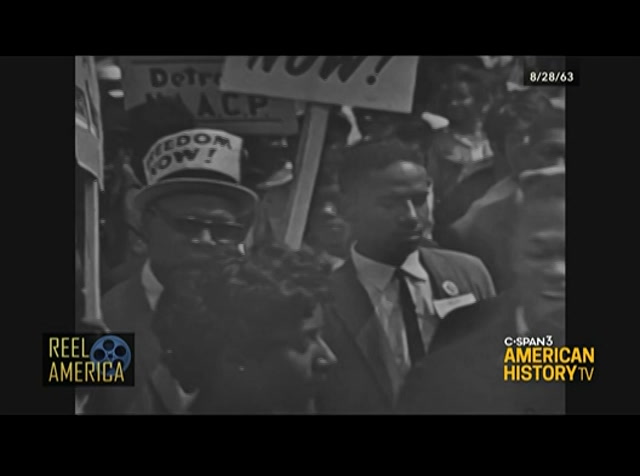 the long change of effective social protests in americas. they spread to many cities before they cause was victorious. and the members were the right to attemptable and be heard. a renowned speech spoke of acceptance of an idea.
11:10 am 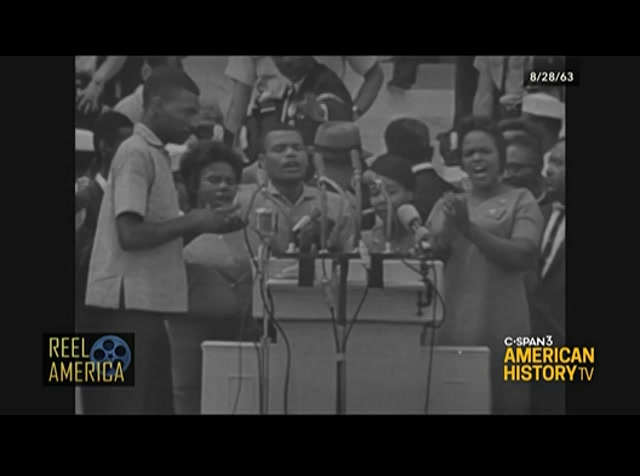 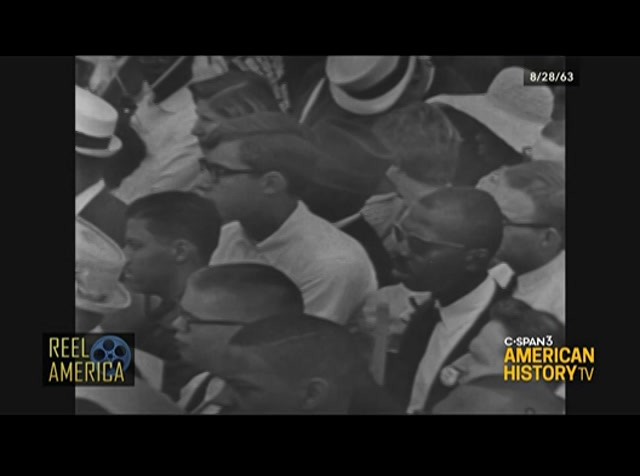 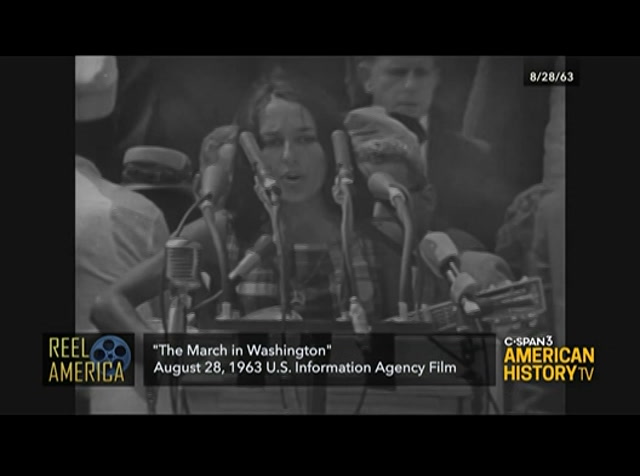 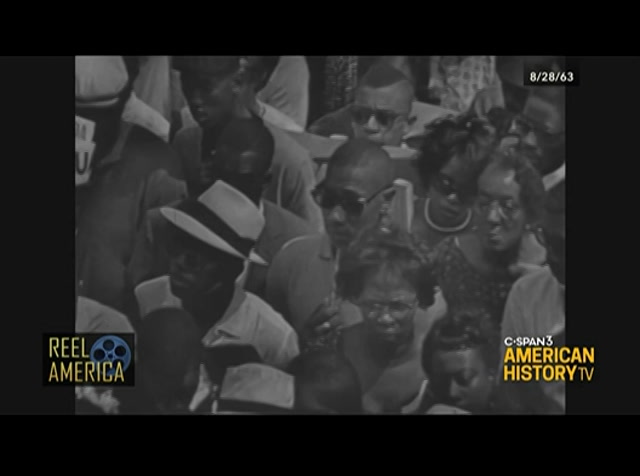 all americans traveling in the world today are in the position of being made biserly aware. for those who are not american the nature and the meaning of our struggle. and we are therefore forever endebted to those members represented by the march on washington. movement. and for helping us to redefine in the middle of the century what is meant by the american revolution we recognize that it is not only in america that there is a bad for freedom. the struggles for freedom on the
11:14 am 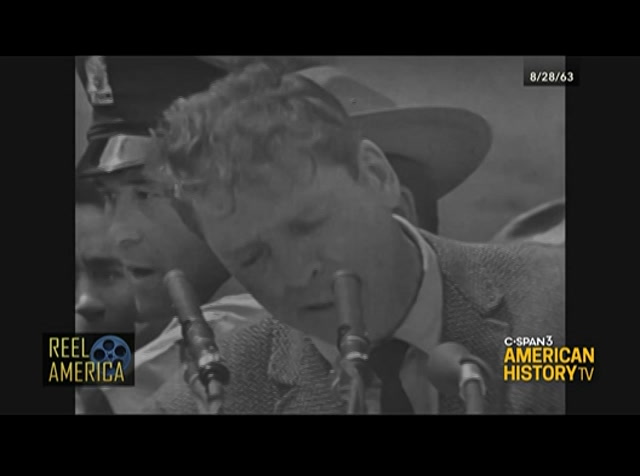 previously subdigated. it is our degree of the dedication to it that our future and the future of the world depend. >> 150 members arrived to add their support. and the support of the people of the states they represent through the spirit of the march in washington.
11:15 am 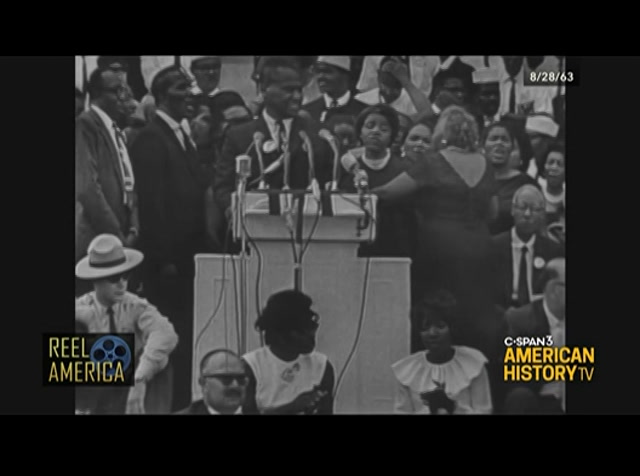 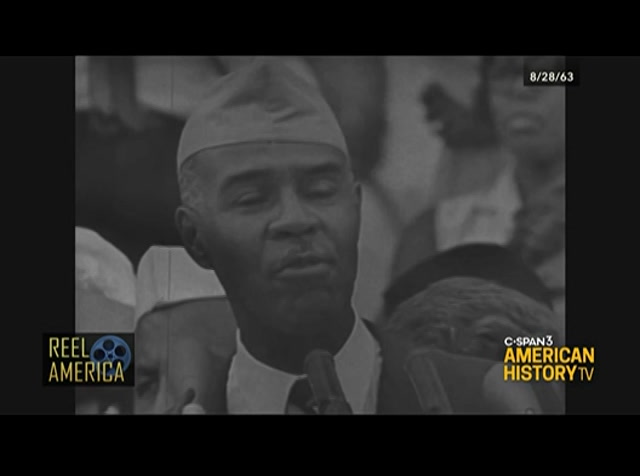 >> i want some of you to help me win a bet. i want everyone out here in the open to keep quiet and i want to hear yell and thunder from all of those people out there under the trees. let's hear you. here is one for those in the trees. >> let us bow our heads in
11:17 am 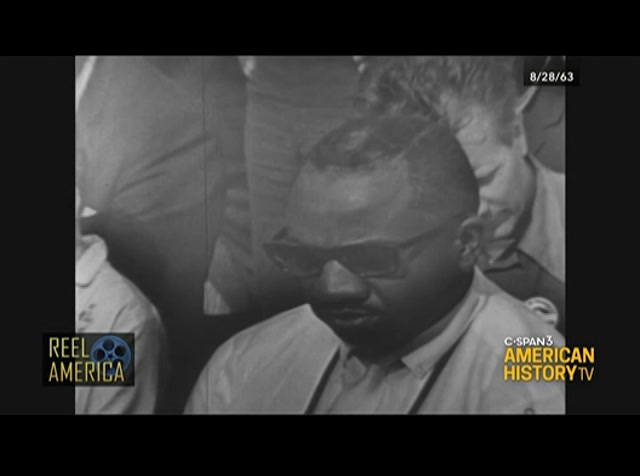 prayer. god of history, and of all mankind god of abraham and moses. these are god. >> their leaders moved on to the white house to meet with
11:18 am 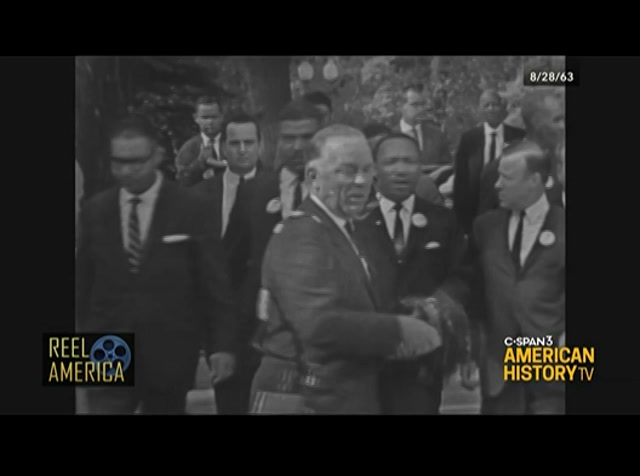 president kennedy. th president's active concern with the progress for the neg row in housing, education, and employment is well known. the members of the overall policy committee on the march in washington reported that the conference was friendly and cooperative. >> we believe that it will have it's effect not only can our negros that are struggling to achieve, but that our white brothers and sisters are
11:19 am 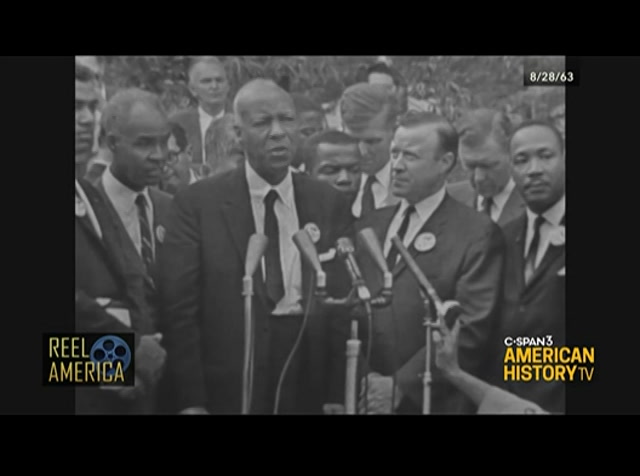 marching arm and arm with the purpose of achieving this objective. and consequently this is and has been a great american experience. the doctor united presbyterian church was another of the march leaders. >> we wanted to get in, clearly the ledge and we are proud to have serveding the witness that he has been carrying. we produced a nondeg cased march. he was also a member of the community that was meat with president kennedy.
11:20 am 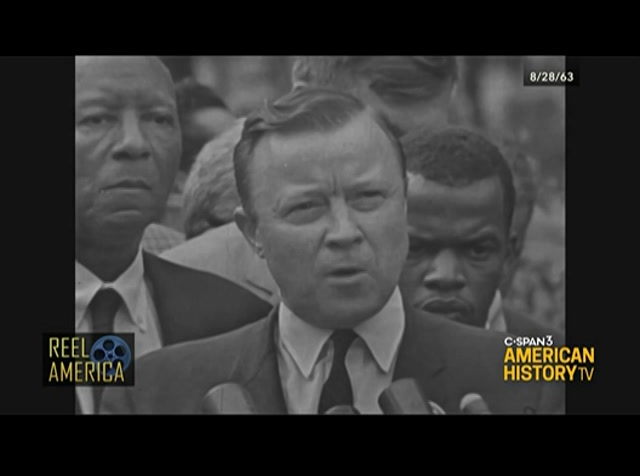 >> we have laid the ground work for a function. fighting discrimination, housing, and unemployment, and i think this is the true significance of what we have seen today. >> the moral leader of our nation. one that has conducted a m!ú]!o campaign against the u(svñócita racism. >> thank you, i would like to
11:21 am 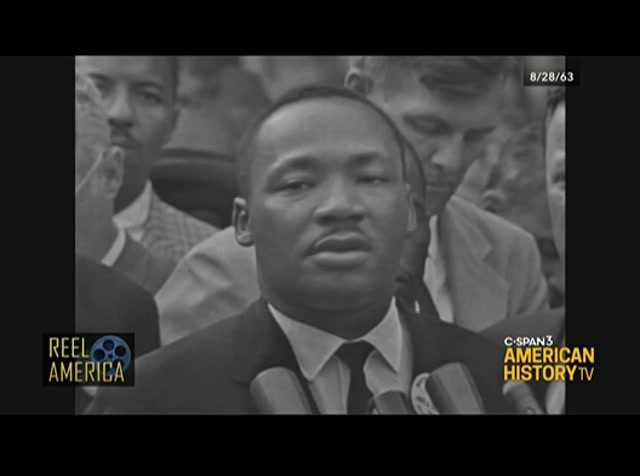 say i think this is one of the great days of america, and i think this month will go down as the greatest dmom straight for demonstration in history. >> they fell over the march in washington. it admitted a lingers sense of shame. it admitted that pain had been overlooked. in so doing america reminded herself of her destiny. her aspirations. the dream that brought forth her burden, and america turned her eyes on the issues of freedom and justice. she turned her attention to the civil rights bill of the elected
11:22 am 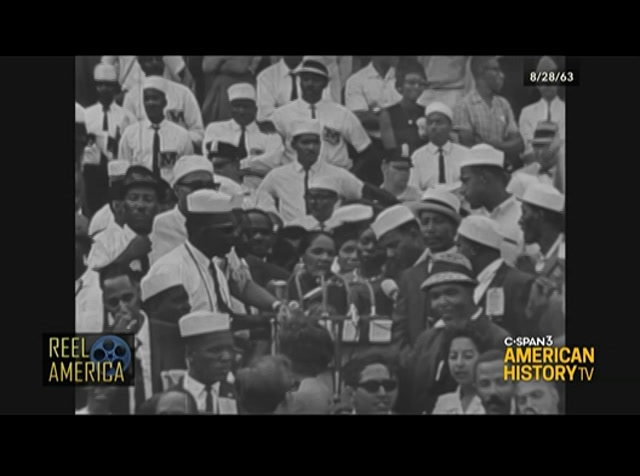 representatives. she turned her thoughts to the job ahead. the meaning of freedom that traveling around the world. where abraham lincoln said silently to the memorial for his memory. the success reminded that it is not enough to hope together to pray together. she is reminded that she must think and act for the common good. >> you're watching american history tv every weekend on c-span three. american history tv created by america's cable television
11:23 am 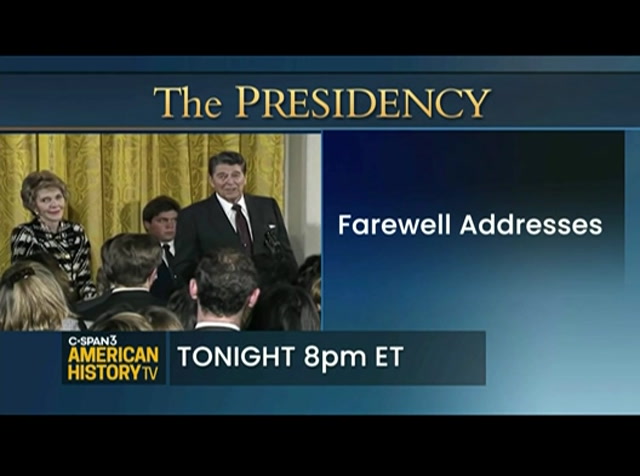 companies. we are featuring american history tv programs as a preview of what is available every weekt on c-span 3. his speech is best known for it's warning about the increasing power of the military industrial complex. we're also going to hear from bill carter, jimmy carter, and bill clinton. >> wednesday joe bide listen be sworn in as the 46th president of the united states. in light of the attack on the capital and the temporary closing of the mall, follow our
11:24 am 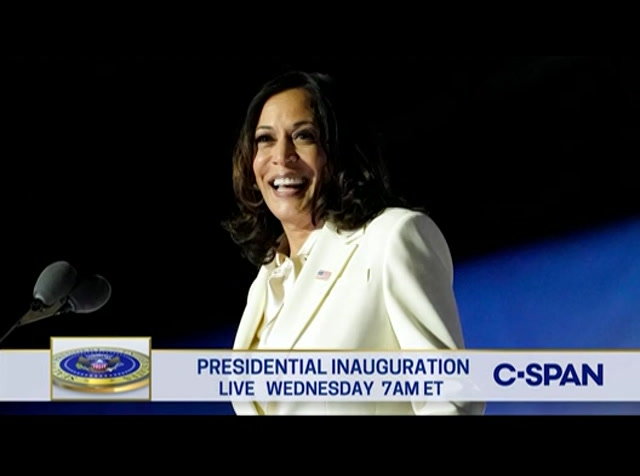 live coverage as the day unfolds starting at 7:00 a.m. eastern. watch the arrivals at the capitol, and the inauguration address. the inauguration of joe biden beginning at 7:00 a.m. on wednesday. >> up next on american history tv, a conversation about martin luther king's "i have a dream speech, and the impact it had on the civil rights movement. this is just under 90 minutes. >> this weekend i went to dc and i went to see the king memorial. that is exceedingly depressing. the original plans included
left
right
Borrow Program
tv

On August 28, 1963 the U.S. Information Agency filmed the March on Washington for Jobs and Freedom and produced a documentary for foreign audiences. By law, USIA films could not be shown in the United States until twelve years after their original production. The National Archives recently restored the film and posted it to their YouTube channel.