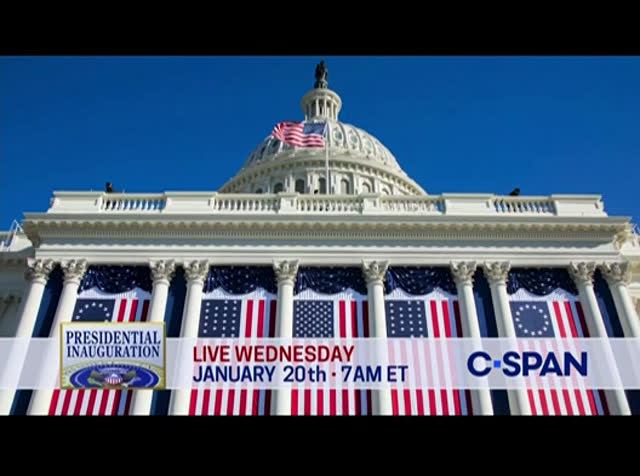 tonight, we begin a night of programs about the johnson presidency with the u.s. informations agency film describing the death and funeral of john off kennedy, who was assassinated and dallas november 22nd, 1963. and a cruise footage of lyndon johnson's statement upon u)jr' washington, the funeral possessions, the mass at saint matthews cathedral, and the funeral at arlington cemetery. it ends with president johnson's meetings with world
8:01 pm 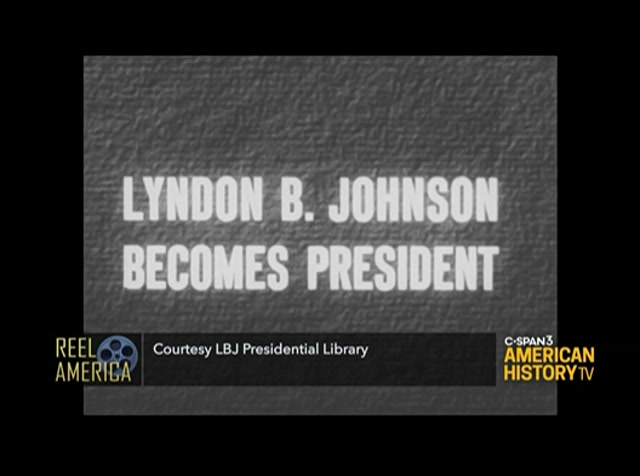 leaders who attended the funeral. >> ♪ ♪ a few days before protests tragic death comes to president john f. kennedy, he in the first lady are the picture of happiness. their children, johng
8:02 pm 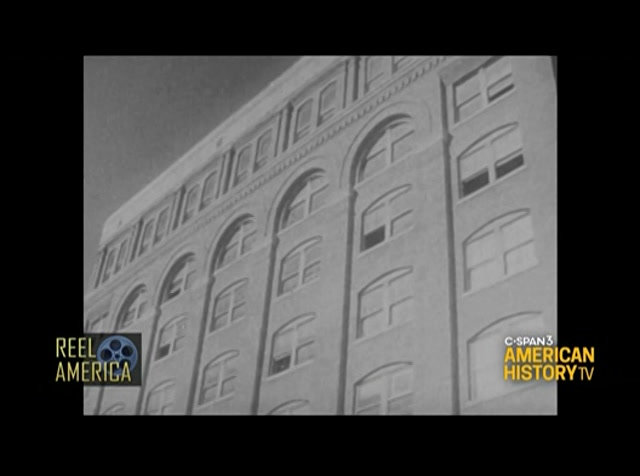 fair the transparent talk has been removed. from a fifth floor window, at 12:30 pm, come the rifle shots that bring death to president kennedy and seriously wound governor connally of texas. 29 minutes later, the 35th president of the united states lies dead in a nearby hospital. the presidential limousine bears the marks of violent death. flowers that mrs. kennedy carried from the airport are twisted and torn. shock and disbelief give way to tears. ♪ ♪ the nation and the world's reaction is one of bewilderment and grief. at the dallas airport, 99
8:03 pm 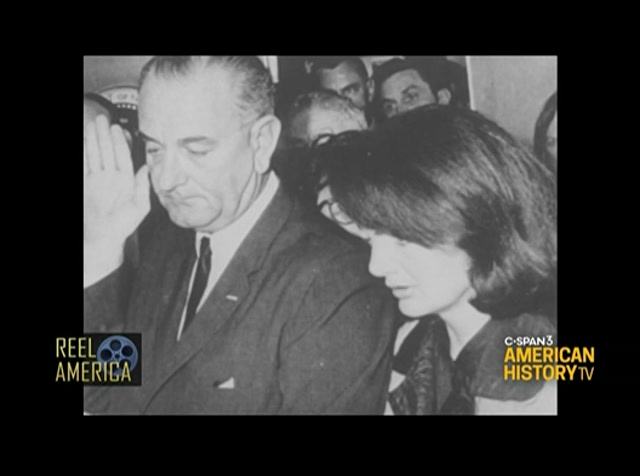 minutes after mr. kennedy's death, vice president lyndon b. johnson, his wife at his side and the grief stricken widow with them, takes the presidential oath before aboard the jet that brings him together with the body of the late president back to washington. lyndon b. johnson becomes americas 36th president. john f. kennedy chose him as his deputy. together they were elected by the american people who now look to lyndon johnson to ensure continuity of government. upon him now falls all the weight of leadership. >> this is a sad time for all people we have suffered a loss that cannot be weighed. for me, it is a deep, personal tragedy. i know that the world shares the sorrow that mrs. kennedy
8:04 pm 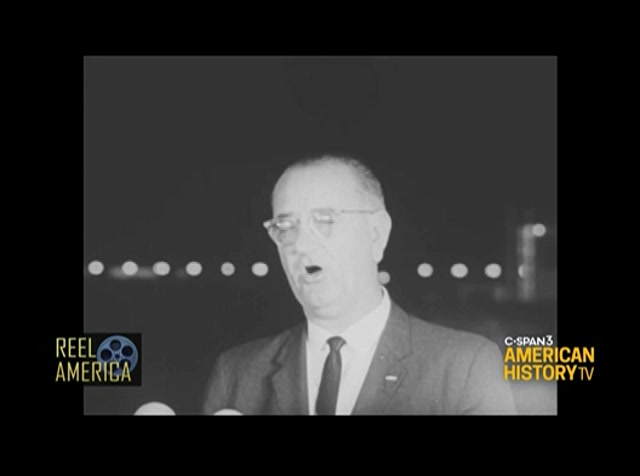 and her family bear. i'm i will do my best, that is all i can do. i ask for your help and god's. >> the nation and the world mourns sean fitzgerald kennedy. the funeral court a moves from the white house to the congress of the to the capital, the seat of the congress of the united states. (drumming) the case on closet
8:05 pm 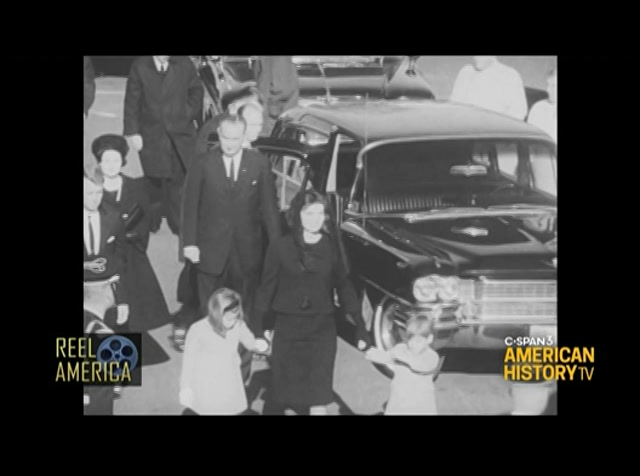 the capital steps in from the limousine come the principal mourners. mrs. jacqueline kennedy and her children, and president johnson and his wife and robert kennedy, the late president's brother. beneath the dome of the capital, the casket rests on a catacomb. president johnson places a wreath of red and white roses at the foot of the casket. (sombre music) then mrs. kennedy holding caroline by the hand goes up to the casket. the widow lifts the flag and touches her lips to the bronze casket. then it is the people of america who come to pay their
8:06 pm 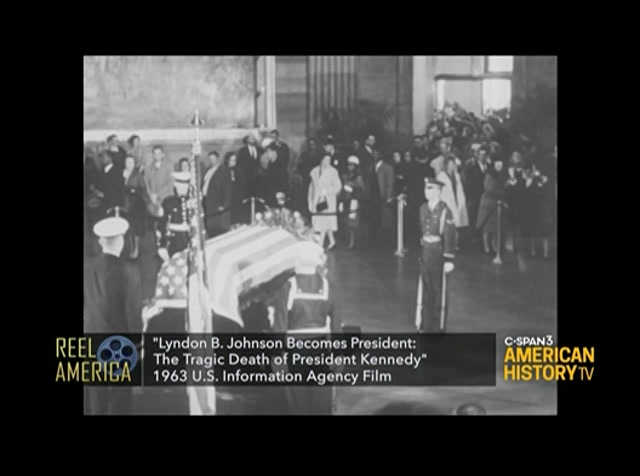 last respects to president kennedy. over a quarter of 1 million stream through the rotunda. many wait as long as ten hours. (sombre music) they wait through the chilly night. not since the death of franklin d. roosevelt on the american people known such deep sorrow. (drumming) next day, mrs. kennedy and her brothers in law had the possession of walking orders. including heads of state who have come from far away for this final march of homage. all follow the late president's
8:07 pm 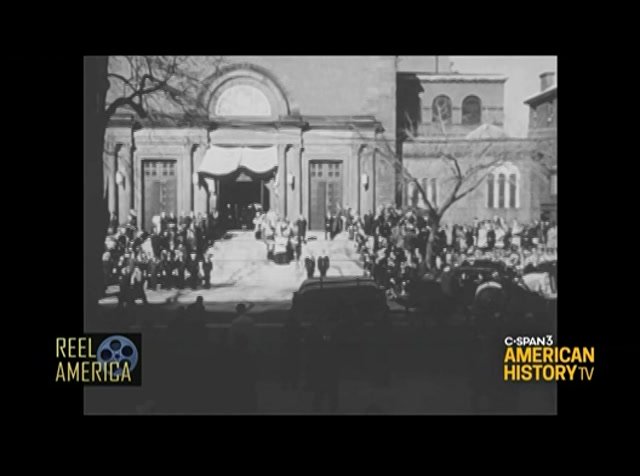 casket, walking from the white house to saint matthews cathedral. at the cathedral, richard cardinal crushing of boston will celebrate for mrs. mr. kennedy the requiem mass of the catholic faith. ♪ ♪ (church organ) >> the notable figures here include the queen of greece, the emperor of ethiopia, the president of france, britain's prince philip, the president of the philippines, the president and chancellor of west germany and many others.
8:08 pm 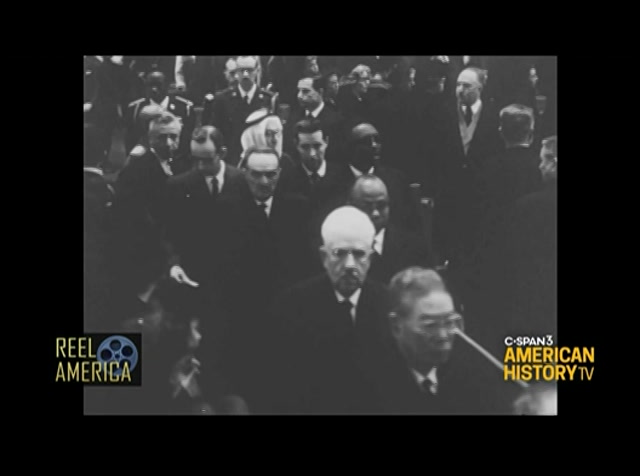 (church organ) among them is and it's not as a kagan deputy premier of the soviet union. that the departure for the journey to arlington national cemetary. little john junior, who is three years old this day, responds to a whispered request from his mother. (drumming) as the cortez crosses the bridge over the
8:09 pm 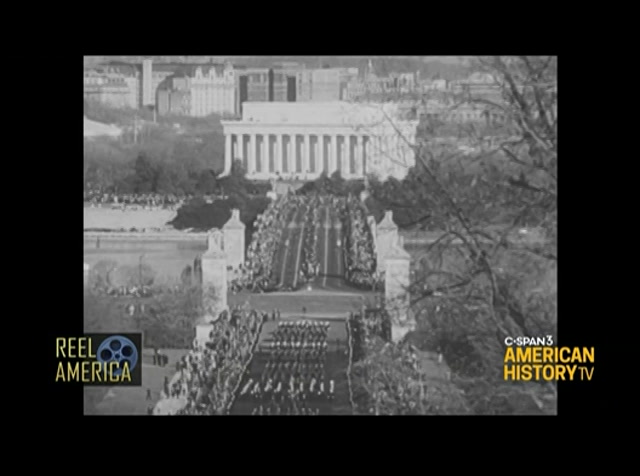 potomac river, there is a distant view of a memorial building dedicated to another martyred president, abraham lincoln. now the last goodbye to john f. kennedy. we (taps) >> the flag that has covered the casket is folded. it is passed from hand to hand by the utter guard. ♪ ♪
8:10 pm 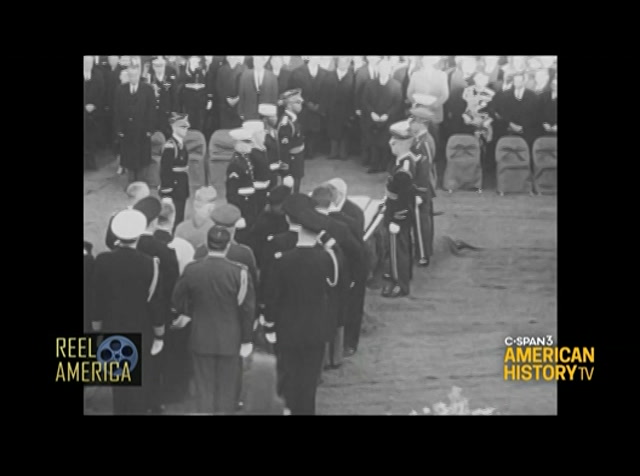 it is received by the widow. mrs. kennedy ignites an eternal flame at the head of her husband's grave. john face gerald kennedy reaches the end of his earthly journey. those he loves leave him at the great hills of arlington cemetery. the new president takes over is duties at once, for the presidency is a continuing institution. with secretary of state dean ross can out his side, he receives the distinguished leaders who attended the funeral. he expresses to them americas gratitude for their sympathy that is come from all over the world. ♪ ♪ president johnson has all along
8:11 pm 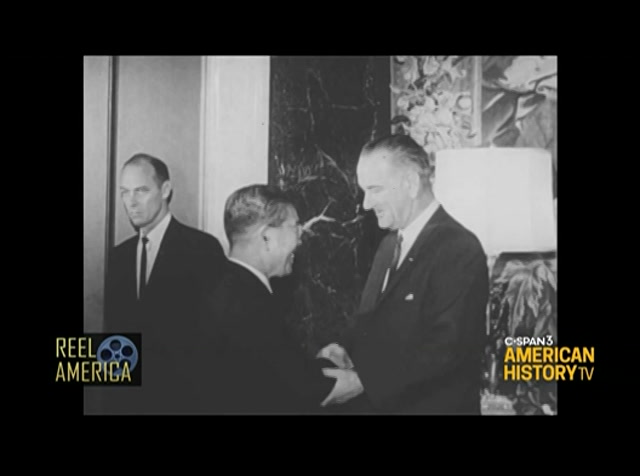 been a strong supporter of john f. kennedy's policies. already he's made known he tends to press for early enactment of the late presidents civil rights bill. president johnson has traveled widely in asia, europe, africa, the americas, and knows the aspirations of their peoples he has assured the world that while defending the interest of free nations, he'll continue the quest for peace.
8:12 pm 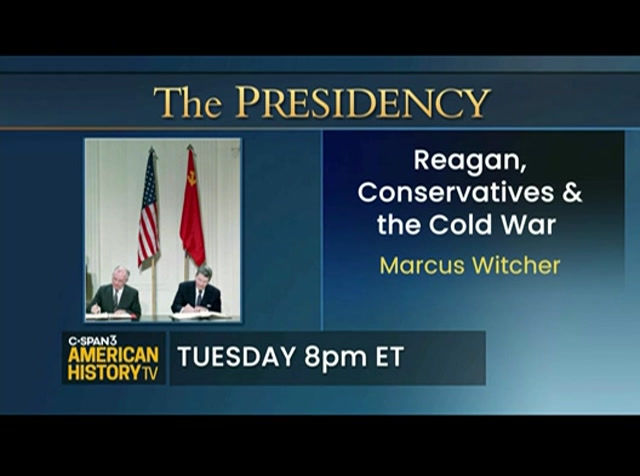 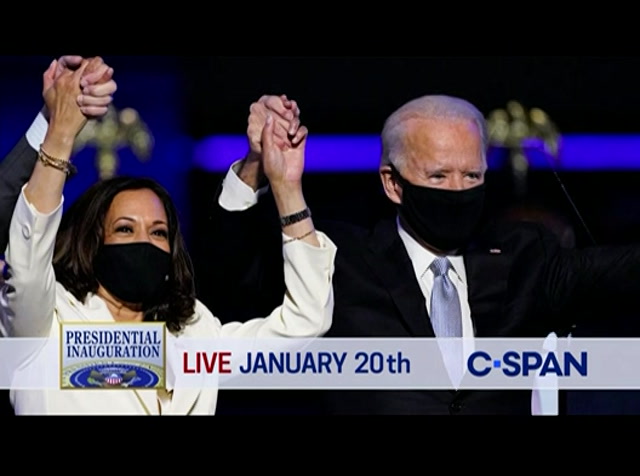 This U.S. Information Agency short film describes the death and funeral of President John F. Kennedy, who was assassinated in Dallas on November 22, 1963. It includes footage of President Lyndon B. Johnson's statement upon arriving in Washington, the funeral processions, mass at St. Matthew's Cathedral, and ceremony at Arlington National Cemetery. It ends with President Johnson's meetings with world leaders who attended the funeral.