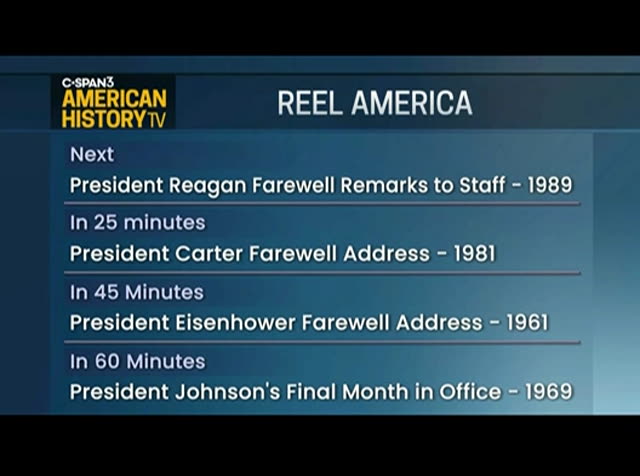 week on american history tv's real america, as the nation prepares for the transfer of power from the trump administration to the biden administration, we look back to past presidential farewells. first, from january 18, 1989, skate -- two days before leaving office, the president and first lady, nancy reagan, enter the east room of the white house to extended applause. we will show president reagan's last radio address. in a 25 minutes from january 1981, president jimmy carter's farewell in which he thanks the nation for the opportunity to serve and warns about the continuing threat of nuclear war. resident dwight d. eisenhower in the oval office in 1961. the speech is best membered for the presidents morning about what he called the military-industrial context. -- military-industrial complex.
4:01 pm 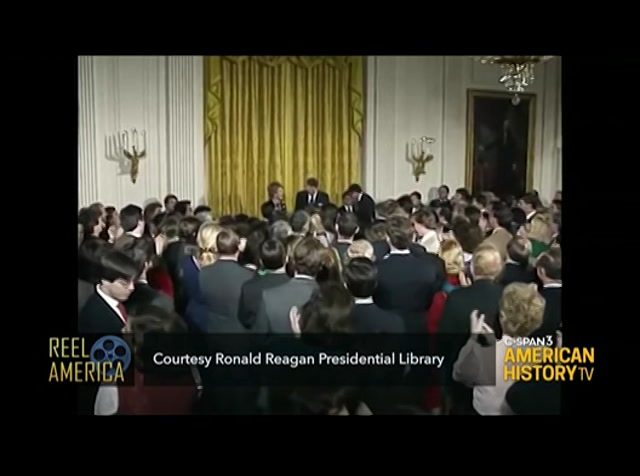 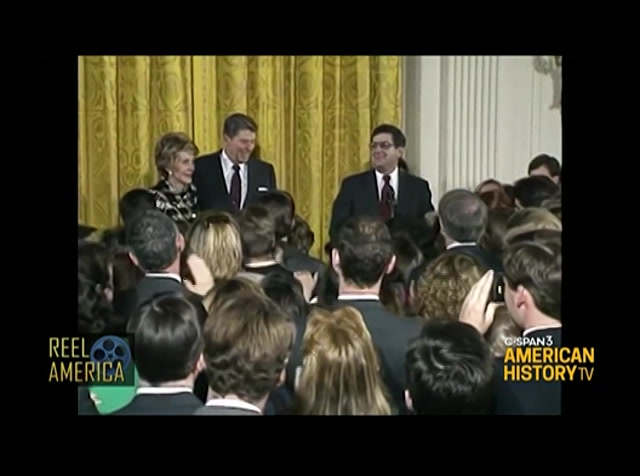 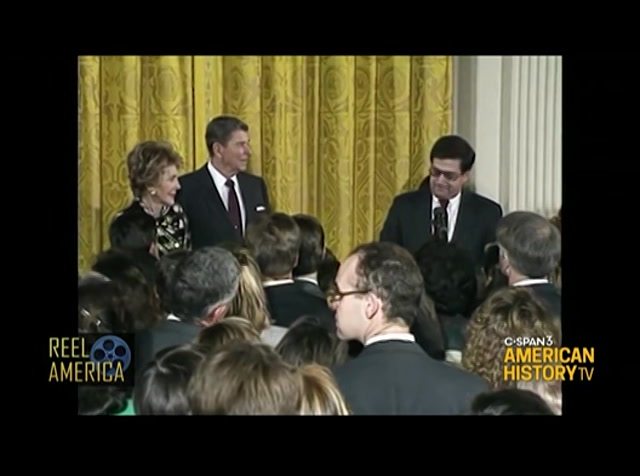 [applause] >> mr. president, mrs. reagan, during the past few weeks over and over again, so many members of the white house staff have asked for a chance as a group to say so long and job well done, so today, the staff has gathered for the last time to thank you both for the opportunity and the privilege of helping as you have sought to both change the nation and change the world. you both have succeeded in both endeavors. [applause]
4:04 pm 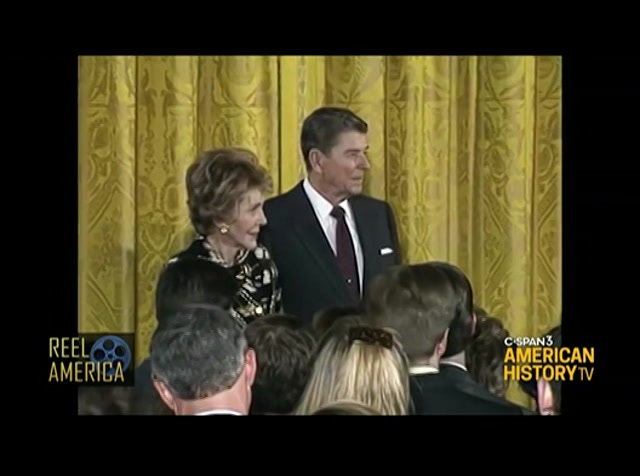 for most americans, the president and first lady are two people they see on television or read about about in newspapers and magazines and the white house as the symbol of american leadership at home and abroad. you have given all of us the honor of being here with you up close to help in the challenges you faced. you have allowed us to play a role in the history of our great country. we have had a chance to help you frame the options just as we help you promote your policies, schedule your trips, and bring your unique message to the american people. mr. president, mrs. reaggan, you both have made america proud again and respected throughout the world.
4:05 pm 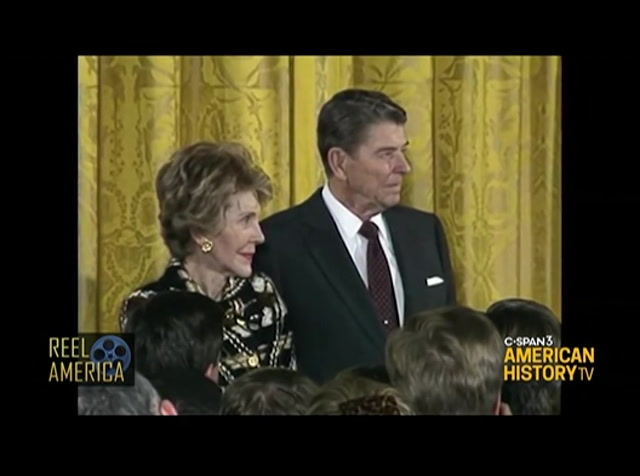 i know mr. president, for the longest time, you have been looking for the guy who has been telling you where to go and what to do every 15 minutes of the day. [laughter] well, mr. president, there are a lot of those individuals and they are all standing before you today. [laughter] on a serious note, you've allowed us to be a part of your lives and you are very much a part of ours. we will cherish the trust you have given us and the warmth that you have shown us. you have our respect and our thanks, but you also have our affection as well as our love. for all of us who have served on your staff, being part of your administration is the highest honor of our lives. it was a labor of love that came from the heart. some have had that honor longer than others. mr. president, mrs. reagan, i would like to call on joan
4:06 pm 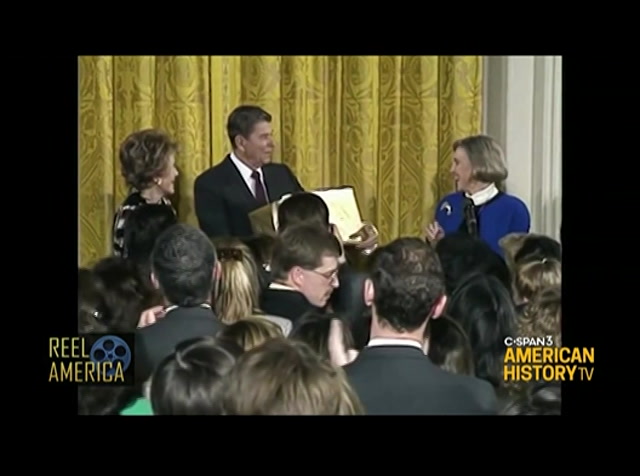 decain. director of presidential comments and greetings office and original plank honor of your administration having been onboard since january 20, 1981. she is among the longest-serving whites of the president's house staff and has a presentation on behalf of all of us, for you. [applause] >> mr. president, i know i speak for all of my fellow staff members when i ask you to please accept this gift as a token of our affection. we hope it will help you remember us when you are out there in god's country with one of those horses we know you'll be riding. thanks on behalf of all the staff for all you've done for
4:07 pm 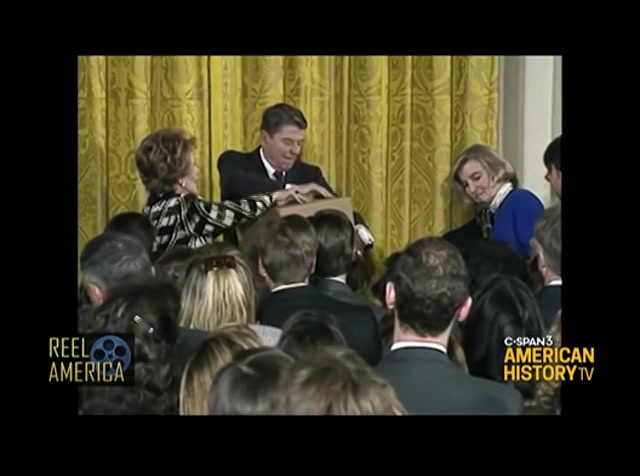 us. we'll miss you terribly. we wish you good health, good life, lots of fun, and god's blessing. thank you, sir. [applause] pres. reagan: i have a little problem. they just took the stitches out. [laughter] mrs. reagan: here, i'll hold it. [gasps] [applause] [cheers and applause]
4:08 pm 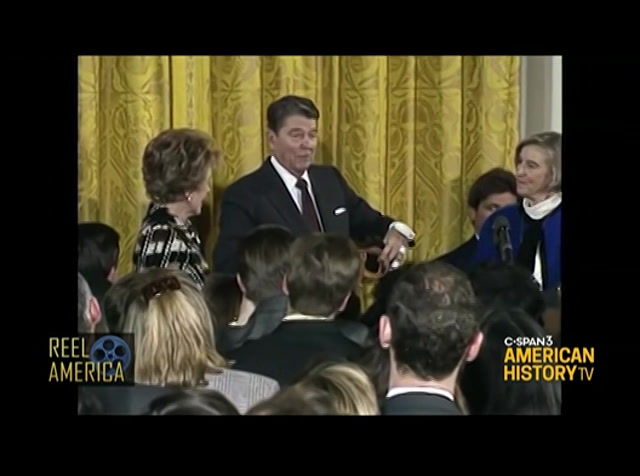 pres. reagan: thank you very much, and when i get home, i understand the canadian mounted police are delivering a horse and this will take care of that. [laughter] oh, thank you very much. >> now, i'd like to ask another original plank owner, elaine kristen to present mrs. reagan with a gift from the staff. [applause]
4:09 pm 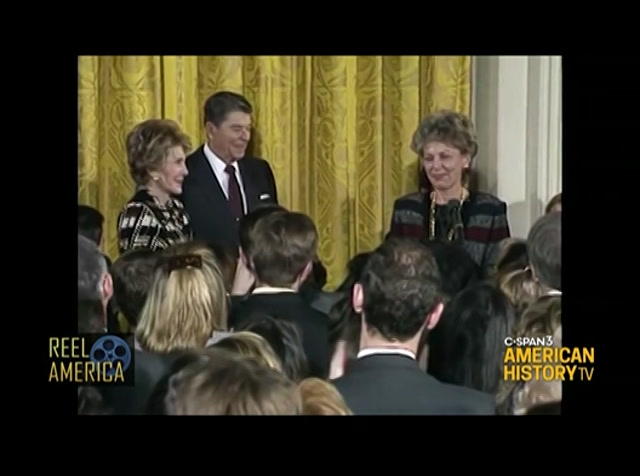 >> if anyone noticed, she knows i'm not going to get through it. we've tried these things before and originally i had prepared a long list of accomplishments. everything from restoring this grand old house and making us proud of the residence of it and the place itself to a million children that say no to drugs because of you and everything that goes between it but there is not time and i would not get through it so instead, as a , person who hasn't allowed you to keep any secrets any the last four years i'm presenting you , your gift. box forwonderful little your collection but it is , special because it is crammed full of love and hugs you can share and it has a bit of magic to it because no matter how many
4:10 pm 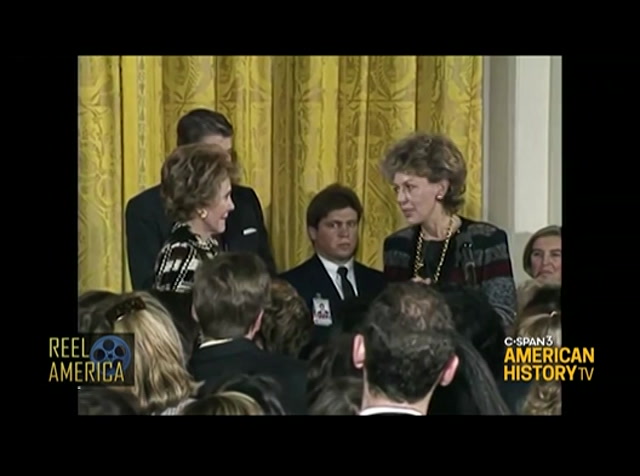 times you open the box, it will always replenish itself because we are not going to forget you. we will always be thinking of you and that love will come across for miles and always be in there. you can open it, see it, give us a hug. we are there for you. [applause] actually, i didn't finish, because we've been proud to call you our first lady, our nancy, or as the taxi driver in new york said, "a real classy broad," but it has been really
4:11 pm 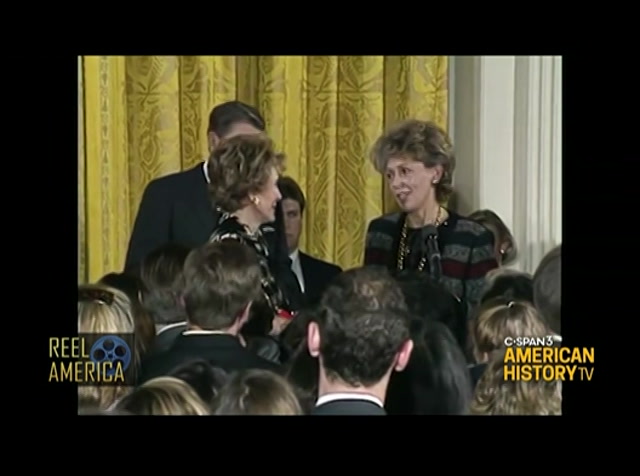 nice to call you our friend. [applause] >> and finally, mr. president, mrs. reagan, we knew you would not want us to leave out rex, so we have a gift for rex. it was handbuilt by the navy seabees at camp david and is carpeted with some of the carpet from aspen lodge. we wanted rex to feel right at home. now, there will always be a rex in the white house. [applause]
4:12 pm 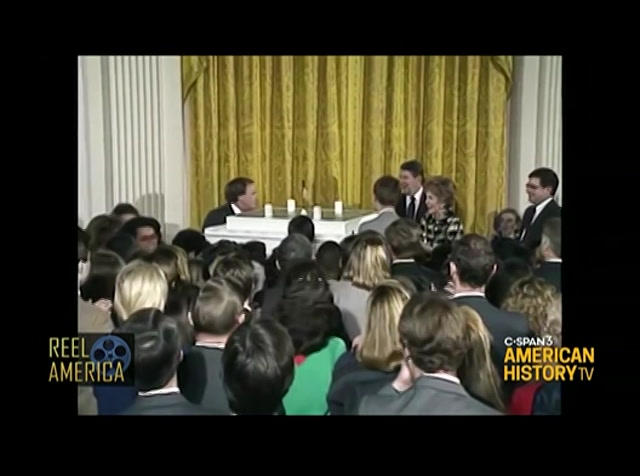 mr. president, mrs. reagan, thank you for what you have done for our country, our world, and for each of us. good luck and may god bless both of you. [applause]
4:13 pm 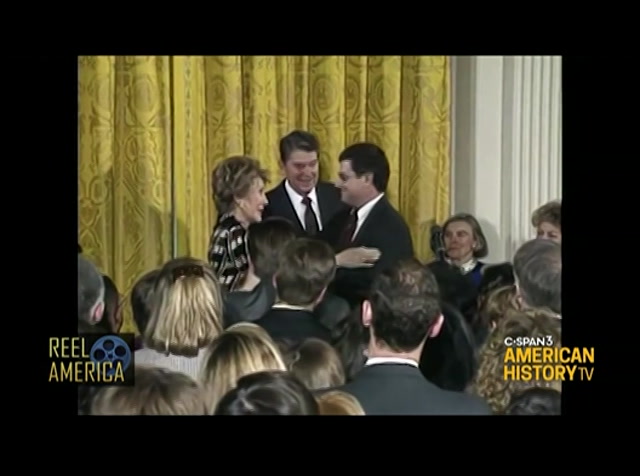 pres. reagan: thank you. thank you all. and not alone for the gifts, though they are wonderful and particularly this last one, because he's already taken over this white house. i'm glad he's got one of his own now, and you know something, he doesn't get kicked out of it in two terms. [laughter] [applause] there aren't any words that can properly tell you how
4:14 pm 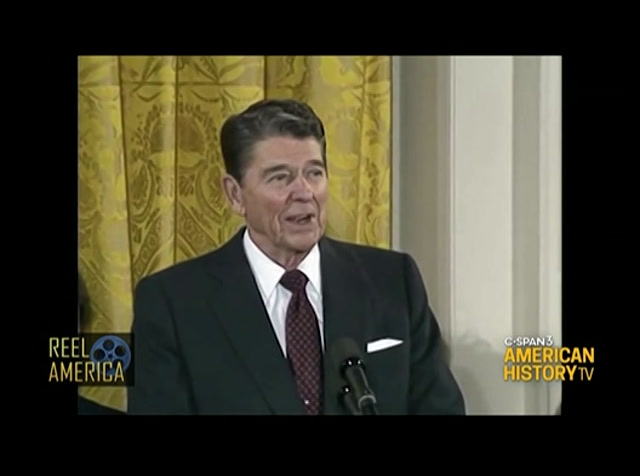 bittersweet these days are, and the things we would like to say to all of you. you know, i keep remembering back and not too far when someplace along the line, there would always be a picture of a president standing in the oval office looking out the window, usually the picture from behind and he's standing there and then his words are quoted as a tag for that picture about this is the loneliest place, lonely and so forth. i don't know about them. i haven't been lonely one minute. [applause] i think both of us have been aware every minute we are here
4:15 pm 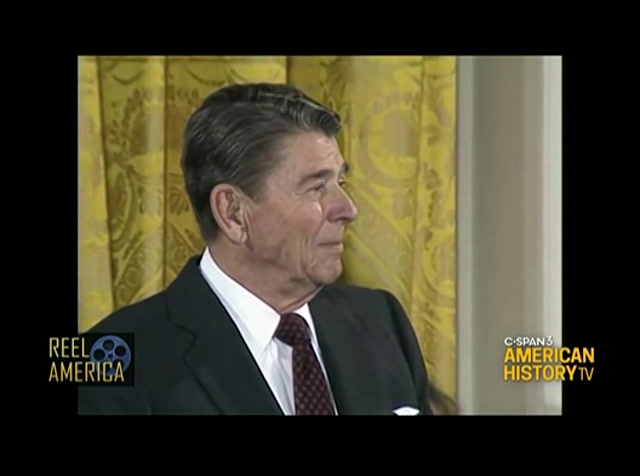 that we are surrounded by you, by others who may not be here in this room today, but here in this house, over there in the west wing, or just here in washington, all a part of everything that we came here to do and it couldn't have been done without you. and we've all shared and i like to think it is maybe kind of close to what happened 200 years ago. we were all revolutionaries and the revolution has been a success, but there just aren't enough words to thank you for all you've meant to all of us and how hard it is to say goodbye to all of you, but as i say, the only thing that makes bearable at all is to remember all that you did and how much of
4:16 pm 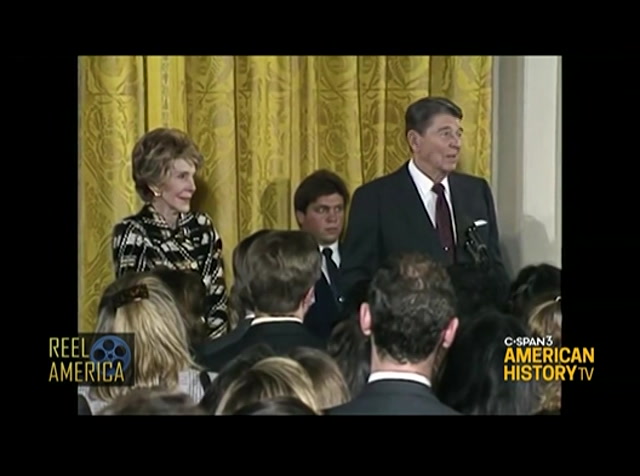 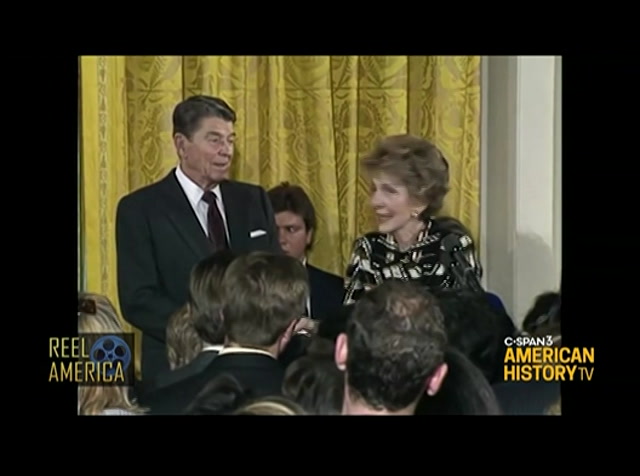 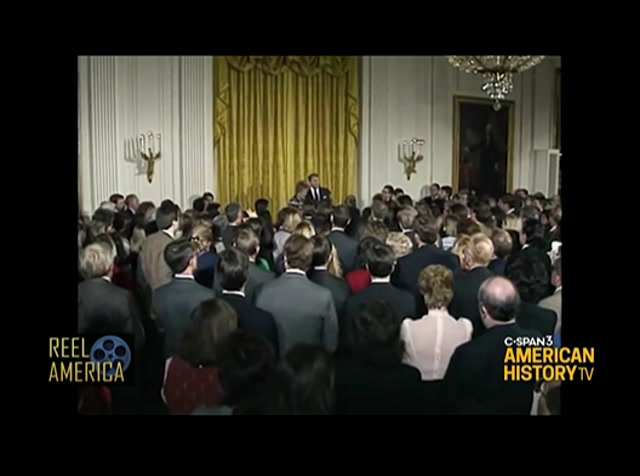 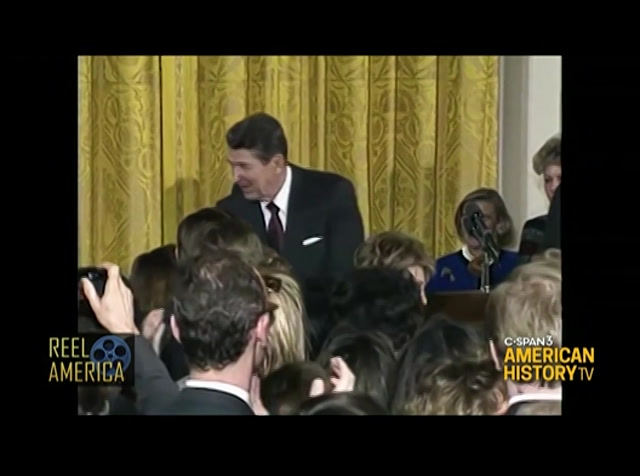 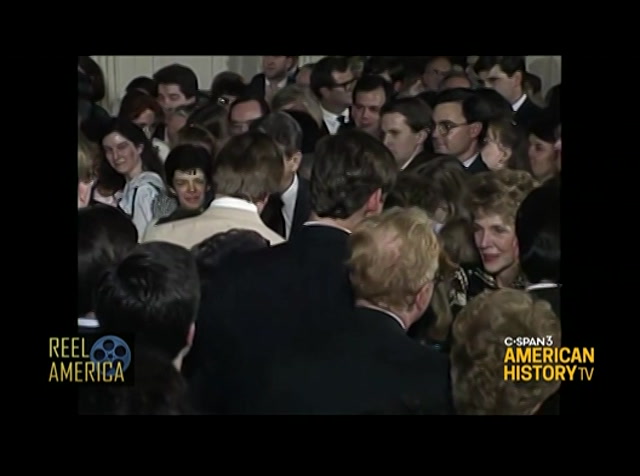 At the end of his second term, President Reagan and first lady Nancy Reagan said goodbye to staff in the East Room of the White House. Chief of staff Kenneth Duberstein, the first lady's press secretary Elaine Crispen, and director of the presidential comments and greetings office Joan DeCain also made remarks.