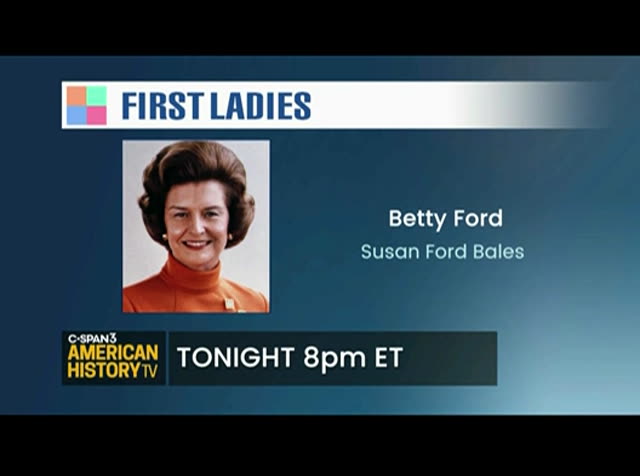 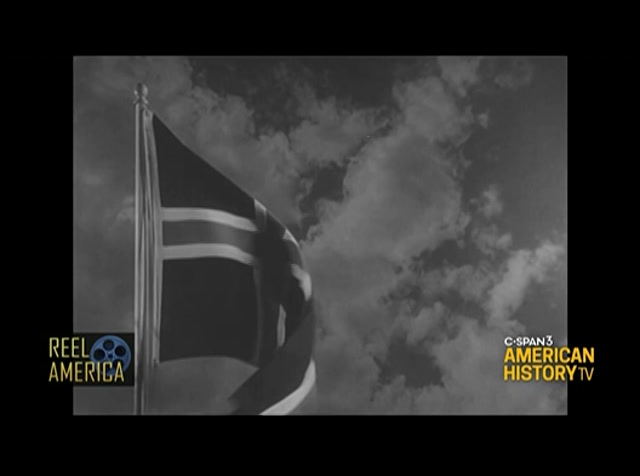 and financed by the u.s. government. the films were designed to familiarize member countries with the culture, history, industries, tourist attractions, and military contributions of their nato partners. next on "reel america," "introducing the united kingdom."
5:08 pm 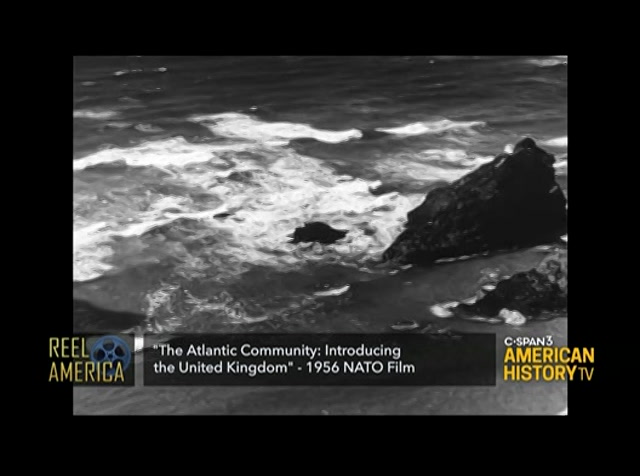 britain is an island. everywhere her frontiers are beaten and encompassed by the sea. no man in this small and indestructible country lives more than 80 miles from salt water. this simple fact has forged the character of the nation. every briton has the cool sea wind in his blood. or thinks he has.
5:09 pm 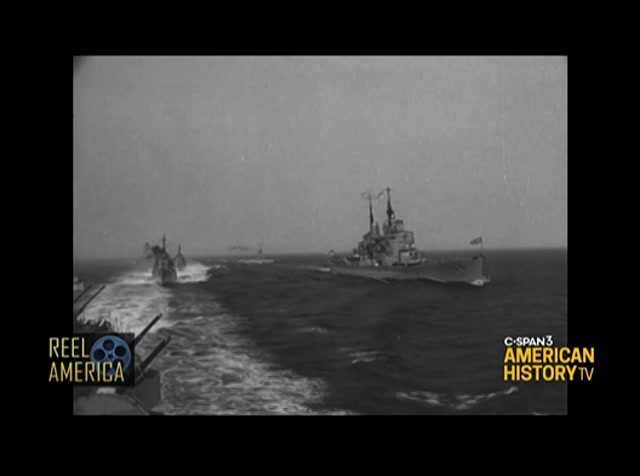 but the seat of britain is much more than a playground. it is the living for the drifter men and trawler men who catch the harvest of the oceans. it is the highway across the world the merchant navy, the biggest general cargo fleet that ever sailed the seas. and especially has that gray water been the bulwark and battlement of a people who lived and grew and prospered behind its shield. in the month of may 1954, there returned to britain the royal yacht "britannia," bringing back queen elizabeth ii and her husband, the duke of edinburgh,
5:10 pm 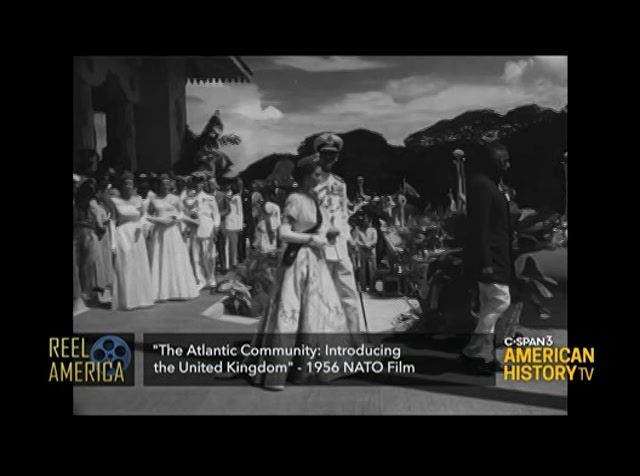 after half a year in some of her overseas realms and territories, a voyage that overcircled the world. for the sea did not imprison britain, rather, it challenged her to expand, to roam across the globe politically, commercially, in a huhugely com social adventure. from an empire of 600 million people, the british created new nations, free and sovereign. today they are guiding still more to the goal of independent dignity. the days of alcohcolonization a done. what was the empire has been transformed by the belief in personal liberty and democratic self-government into an association both loose as freedom and strong as kinship, over a quarter of the surface of the earth. of this, the queen is head. in seven member states, government is carried on in her name. the queen of england is also the
5:11 pm

queen of australia. she opens parliament in canberra in the same way and with the same right as in westminster. and yet britain still, as she always did, belongs to europe. among the nations of the atlantic alliance, she is set strategically upon the shoulder of the continent. the moat, the channel, narrows to a little neck 22 miles wide. it is but a small obstacle to the thousands of visitors who swarm across it every day. a small impediment to the natural unity of britain with the rest of the continent. the defense of the west is the defense of britain. britain is an island. but a european island.
5:12 pm 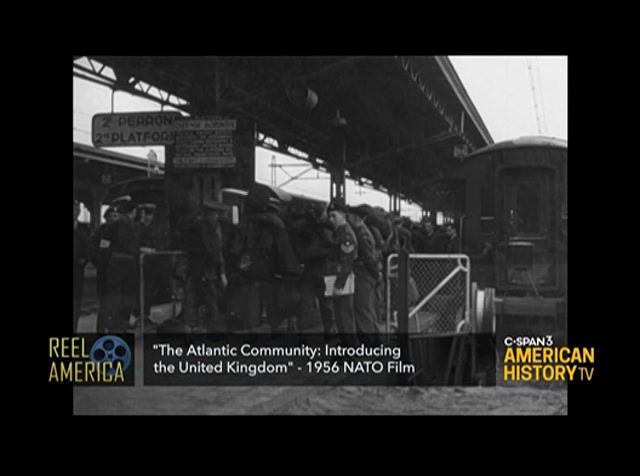 this is nothing new. there are roots deep in the past. fontanel. the landing of denhelder. waterloo. balaclava. mons. ayeppe. the beaches of normandy. stretching through history into yesterday, they are etched into britain's past. with this sort of past, how could she escape the present? in germany today stand four full-strength british divisions with, which canadians, dutchmen, and belgians, form nato's northern army group. behind them is the support of
5:13 pm 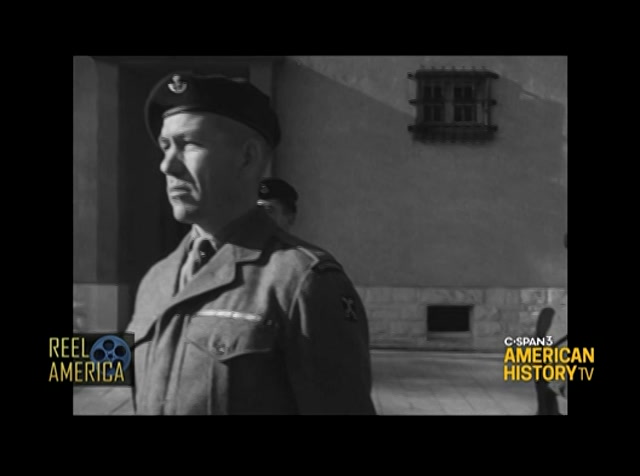 the 2nd allied tactical air force. most of these british troops are citizen soldiers. national servicemen called up at 18 for two years. trained with and beside their colleagues of the regular army. >> carry on. >> guard, stand at ease! to the guard room! dismissed! >> defense costs a great deal in patience and loyalty and, indeed, in money. on it is spent a third of all
5:14 pm

britain's national expenditure. those are the ruthless economics of today. and for this island nation, defense is not only the army and the royal air force, at home and abroad. it is also preeminently the navy, protecting lines of communication across the entire world. defense, moreover, is a people's job. for behind these standing forces are the reserve formations. the spare-time enthusiasts. men and women, too, who work all day and still give evenings and weekends for training. some in the royal naval volunteer reserve. some in the royal auxiliary air force, to learn the multitude of
5:15 pm 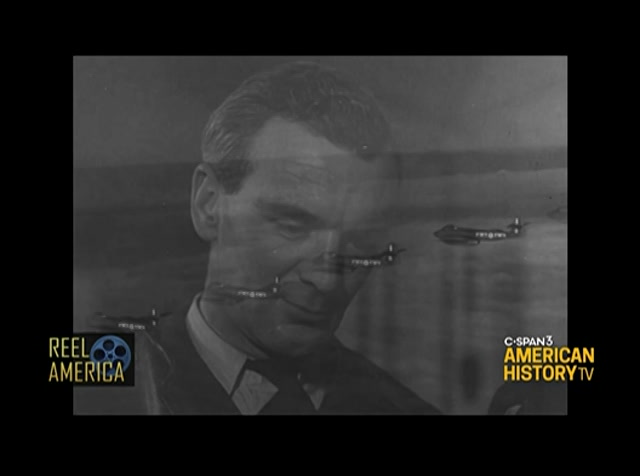 crafts that keep the planes in the air. or in the planes themselves. others maintain their old skills and learn new tricks in the territorial army. but defense today means so much more than men. it means machinery. a huge industrial output married to the newest scientific skill can produce a formidable armory of weapons.
5:16 pm 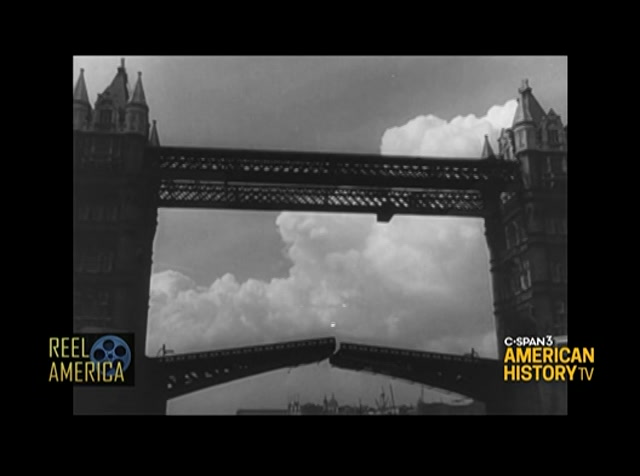 but britain's real job is not making weapons. it is something far simpler and far harder. that of earning a living. this island's economy is simply stated. britain must import half of everything she eats and almost all the raw material she uses. to pay for what she buys, britain must sell, and sell the things she makes. the wealth of britain is in her workshops, tens of thousands of factories devouring one indispensable nourishment, power. power from coal. britain is built on coal.
5:17 pm 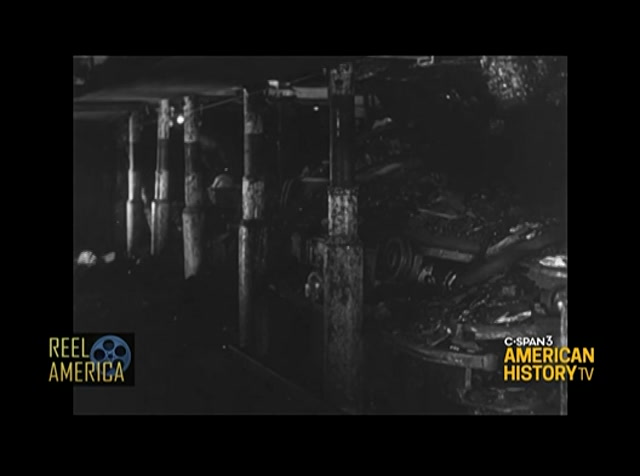 of all the nations of western europe, britain produces the most. it was a grim and groping business once, and sometimes still is. recently there's been mechanization and modernization of the mines. new techniques of the underground. but even that is not enough. what else besides coal? left side the nation is seeking new sources of energy. what about oil? britain produces practically none. but one of her great post car achievements has been the building of new refineries which take the imported crude oil and manufacture now 26 million tons of petroleum a year, nearly nine times as much as before the war. and even that goes only part of the way. the future lies in the still
5:18 pm 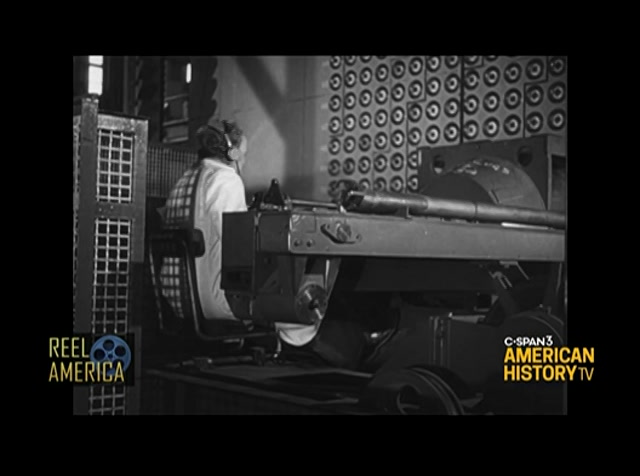 newer atomic factories, laboratories, indeed, practical powerhouses, giving nuclear energy an industrial justification. the production even of uranium and plutonium has a decent peaceful use. but still the bones of industry are iron and the sinews are steel. britain is the third-largest steelmaker in the world. ice biggest single development since the war, the new plant at margham and south wales, turns out 1 million tons of steel a year.
5:19 pm 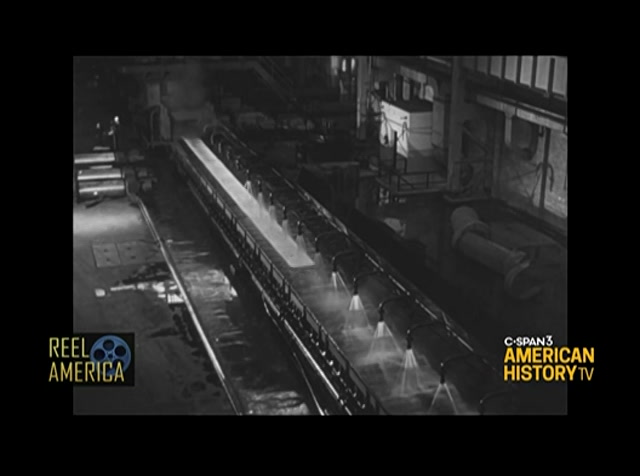 remember that britain must sell in order to live. of all the things she exports, the most important are the products of her workshops. she exports more automobiles than anyone else in the world. she leads the world in ship building. she was the birthplace of the steam locomotive. she pioneered the jet engine, which in its turboprop form powers the famous viscount
5:20 pm 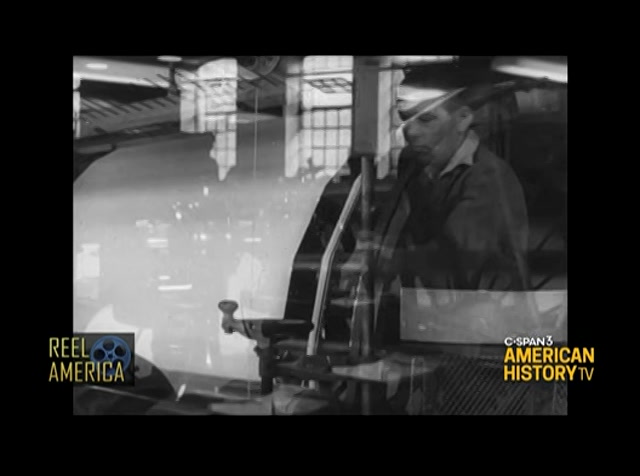 manufacture and export. that is the rhythm of the national pattern. goods of vast variety, made with the skill of craftsmen. produced for a market distributedt@ilj;: over the glo. over the sea.
5:21 pm 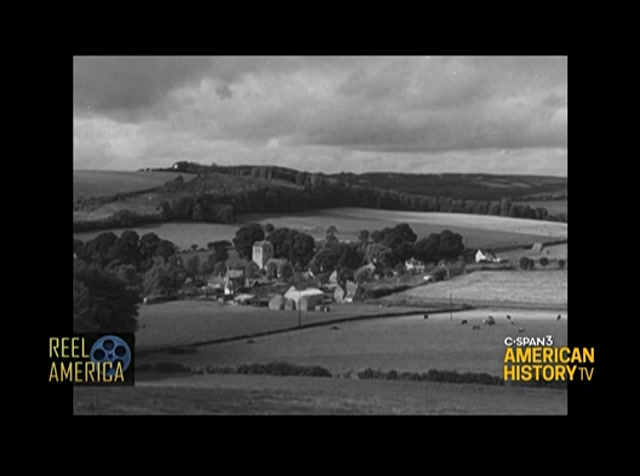 the sea, whose pervasive influence shapes the nation. it gives britain a variable, quiet climate. full of caprice. full of surprise. the wind from the sea bearing always some rain cloud to render green the lawns and pastures. to paint the lovely trees with blossom. the sea made the nation. but the farmers made the land. generations of them molding the countryside into friendly, useful shapes. with machinery nowadays here, too. for britain's agriculture is one of the world's most highly mechanized. from these fields come half the country's food.
5:22 pm 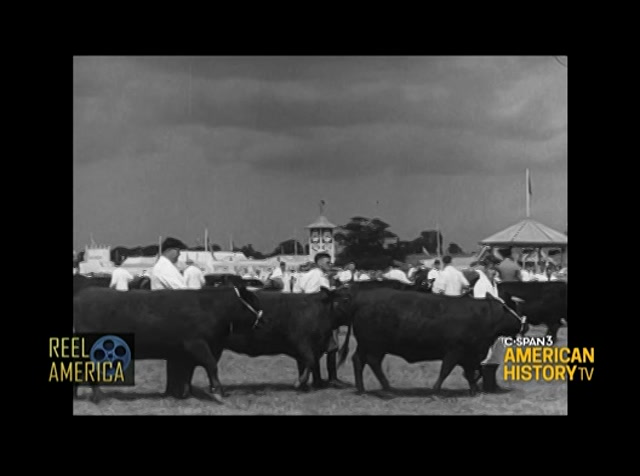 on these fields feed the beasts, the champions, the ultimate thoroughbreds who themselves go overseas to sire dynasties of champions in other lands. but what is a nation, really? only its people. they may go back a long way, but the british are above all things a contemporary people. living their lives with enthusiasm and zest and cheerfulness. who are they? well, they work with their muscles. they wrestle with papers like everyone else. they work in shops. they create things.
5:23 pm 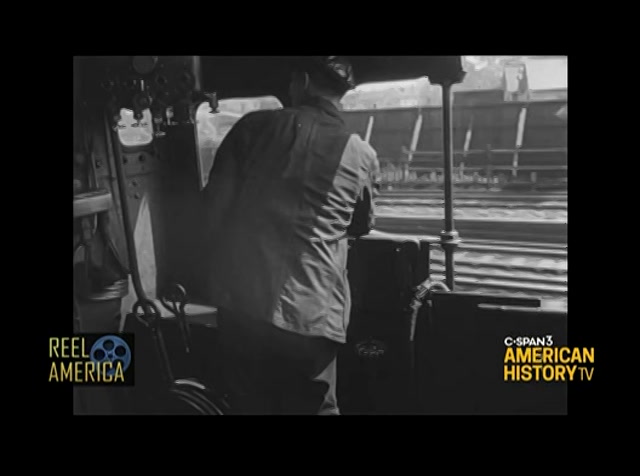 they communicate things. they control big machines. they conjure with curious secrets. and then there are those who take the responsibility for organizing the community system that is called government. from the small ways of the local town council to the big ways of the nation's administration, all aiming at a new national effort, a new standard of living. whole newtowns have been put up to replace the mean ugliness of overcrowded streets. a thousand new houses every day is the target set and reached. nor does building mean only houses. an organized life means social services, like the national health service which gives everyone in britain the right to
5:24 pm 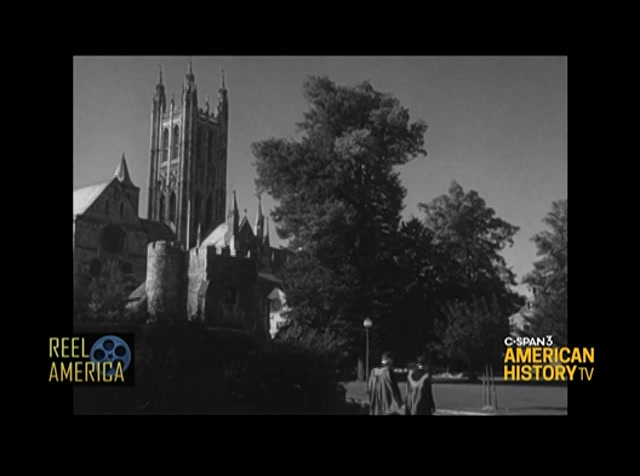 free medical care. it means education, another aspect of the gentle revolution which established the principle of an equal chance for every child to learn how to learn. both in the centuries-old-schools of the traditional past and in the new establishments of the galloping present. this is one of 2,400 like it built since the war. the system of grants and scholarships now allows any child who has the ability to go on to one of the 20 universities, which again continue to mellow the efficiency of today with the charm of a day before. the past clings on.
5:25 pm 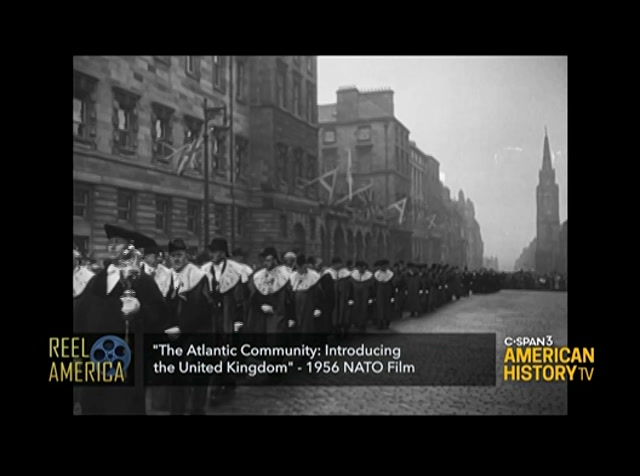 where it is comforting, where it is not obstructive, where it brings its gay or ponderous charm into the life of the 20th century. britain loves its trappings, its masons and robes and wigs. these things demonstrate what was good and proper in the achievements of the past. for the rights and obligations of men and associations. for the liberties demanded by free men. for the supreme authority of the law. from this feeling comes the national sense of public discipline. a climate of civic calm. of the contented decency of law and order. that, indeed, is what the british work and pray for. an orderly and dignified world. a world of peace in which the
5:26 pm 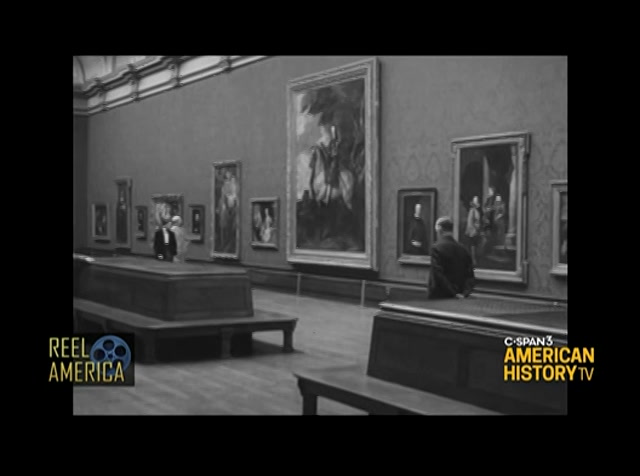 arts of peace can flourish and be enjoyed. >> every fool can tell that. that was the very day young hamlet was born. he was sent to england. why? because he was mad. he's to recover his wits there, or if he do not, 'tis no great matter. ♪ ♪
5:27 pm 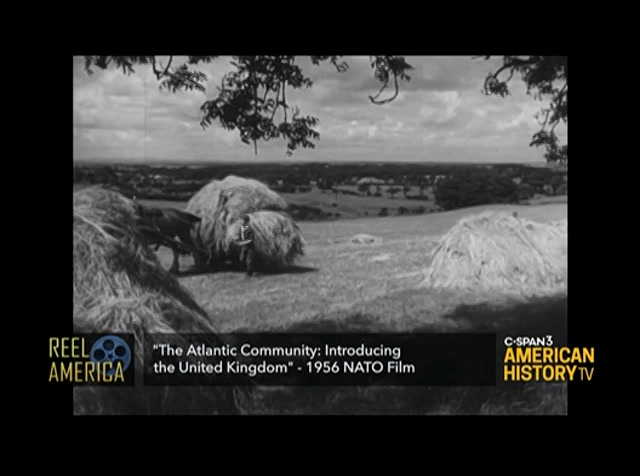 >> frontiers no longer a sure and potent field, britain seeks security with her neighbors in the atlantic alliance. to the task of building that 15-nation community, the people of britain pledge themselves.
5:28 pm 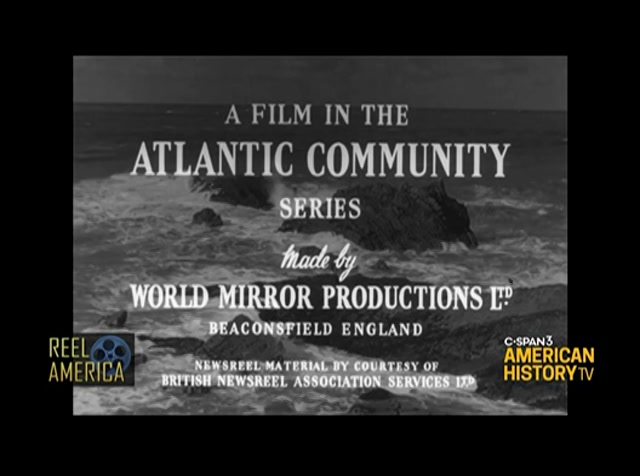 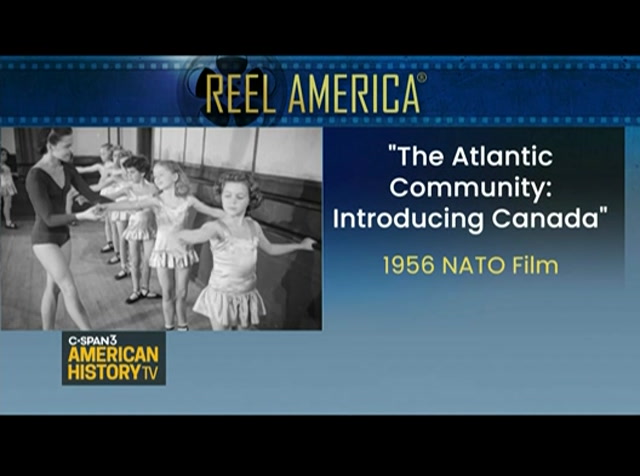 the north atlantic treaty organization was founded on april 4th, 1949, with 12 members. the atlantic community is a series of 20-minute films produced between 1954 and 1956 and financed by the u.s. government. the films were designed to familiarize member countries with the culture, history, industries, tourist attractions, and military contributions of their nato partners. next on "reel america," introducing canada, our neighbor to the north.
left
right
Borrow Program
tv

"The Atlantic Community" is a series of twenty-minute films produced between 1954 and 1956 and financed by the U.S. government. The series was designed to familiarize NATO member countries with the culture, history, industries, tourist attractions, and military contributions of their NATO partners and was distributed in many different languages for television and cinema audiences. This episode is an introduction to the United Kingdom.