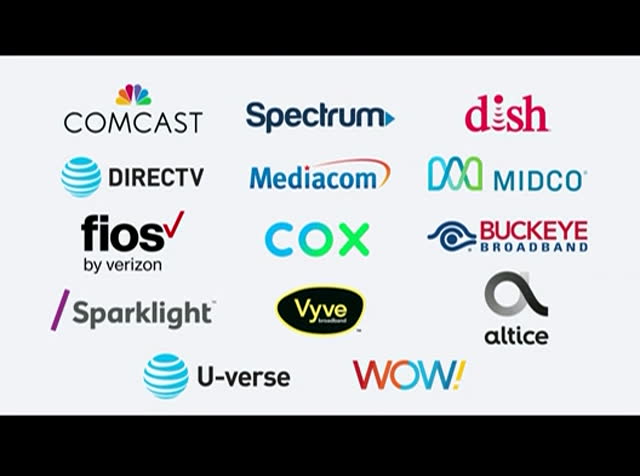 american history tv on c-span3 created by america's cable television companies and today were brought to you by these television companies who provide american history tv to viewers as a public service. the north atlantic treaty organization was founded on april 4th, 1949 with 12 members. the atlantic community is a series of 20-minute films produced between 1954 and 1956 and financed by the u.s. government. the films were designed to familiarize nato member countries with the culture, history, industries, tourist attractions and military contributions of their nato partners. next on "reel america," from 1956, introducing the united states. the opening and closing titles in this film are in spanish, but the narration is in english.
12:48 pm 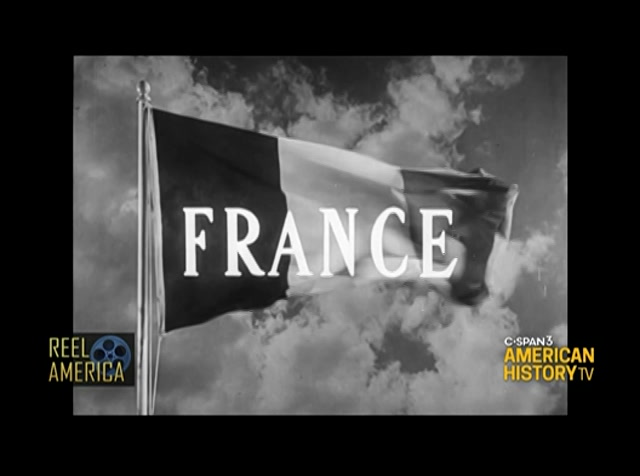 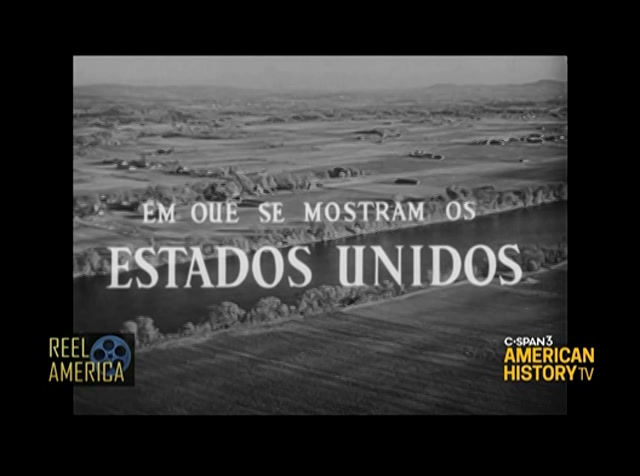 to this land they've been coming for over 300 years, peoples of europe, from england, ireland and scotland, from scandinavia and the lowlands, scandinavia and the lowlands, from germany,z france, from spain, portugal and italy, from greece and turkey, from eastern and central europe. they and their descendants tamed a wilderness and created one nation, the united states of america. memorials mark the first settlements on the atlantic coast. boston was founded in 1630. here 146 years later, the declaration of independence was
12:50 pm 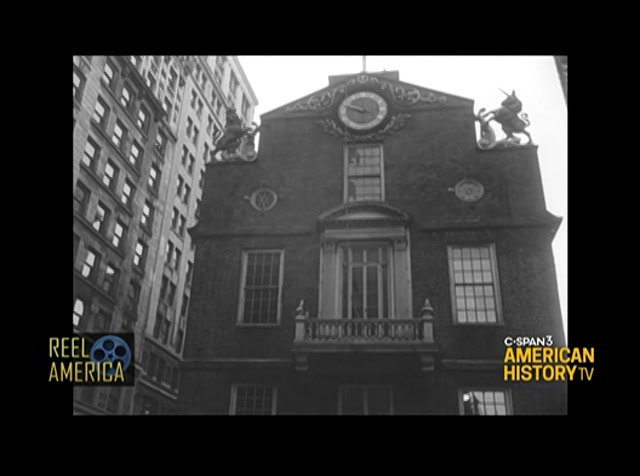 read from the balcony of old state house. >> like other bustling cities of america boston has its quieter corners, landmarks like the flower market give it a reassuring sense of tradition and time. ♪ harvard university is just over 300 years old, the first to be founded in this young country. 200 miles southwest, new york city is a world by itself. once a small dutch village, it is now a giant with 1,000 buildings reaching to the sky, a gateway to the united states.
12:51 pm 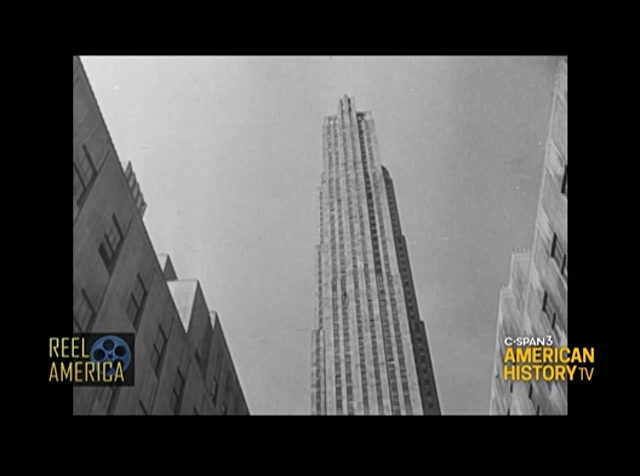 ♪ america's 166 million people trace their ancestry to many nations. the variety of their origins and cultures, the diversity of their talents have enriched the country. through them an area almost the size of europe was united within one border and made to prosper. ♪ the fast express train takes three days to cross the united states from ocean to ocean, past farmlands spread out as far as the eye can see. ♪ past cities and industrial centers. in the west, the open prairie rolls out to the foothills of
12:52 pm 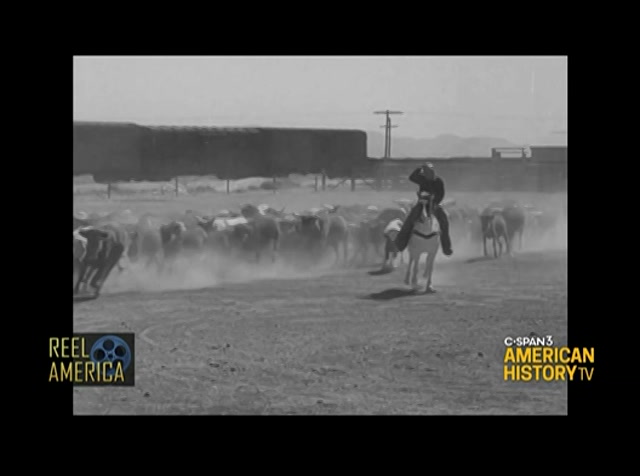 the rocky mountains. cowboys round up their cattle. dams harness the great rivers. churches mark the pioneers faith. the vastness of their country inspired the american people to do many things boldly. they have a large land to settle. they pioneered from new york to san francisco, from the atlantic to the pacific. the united states grew behind vast oceans to east and west with friendly neighbors to north and south. along the 3,000-mile canadian border, the only cannon are historic relics. both countries have a feeling of security in the north american
12:53 pm 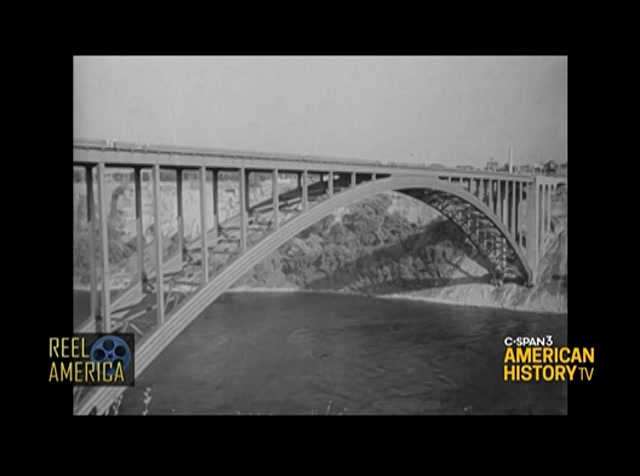 continent. today the united nations headquarters stands in new york a daily reminder of the need for nations to work together for peace. to help secure that peace, the united states joined the 15 nation north atlantic treaty organization or the american people, membership in nato was never an issue. voters of both major political parties strongly supported the alliance. in 1952 they elected president a man who had played a vital role in europe, dwight d. eisenhower. as supreme commander he led armies in the liberation of europe. there for the second time in a generation american boys had joined in the cause of freedom.
12:54 pm 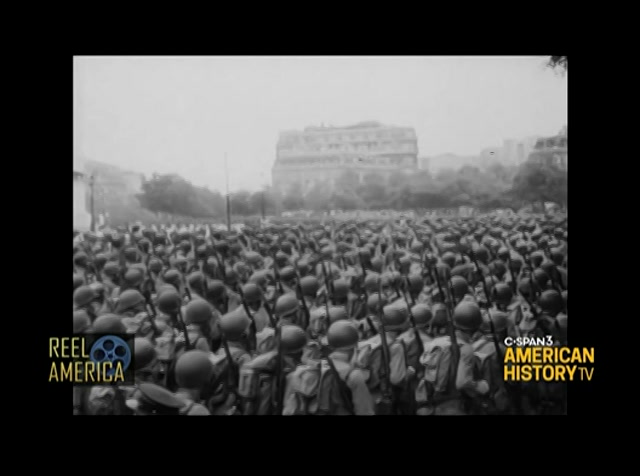 ♪ they went home, their country sought to help them resume a peaceful life. schools opened their doors to millions of veterans. ever since it began, the united states has seen a constant growth of education. a high school diploma is now almost taken for granted. every year 2.5 million students enroll in the universities and professional schools. many of the young men who had fought in north africa and normandy went back to the farms. they went back to working the earth in the quiet rhythm of the
12:55 pm 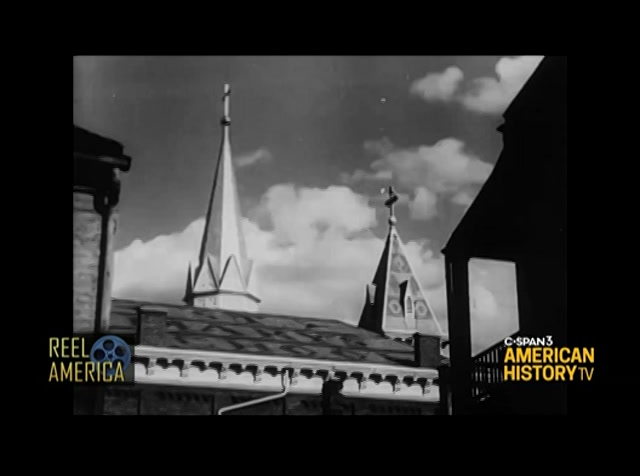 seasons. they reaffirmed their spiritual values, different faiths living side by side in mutual respect, in the belief many are the ways to god. ♪ americans have a keen sense of fraternity. should a neighbor's livelihood be jeopardized, they are quick to lend their labor and their time to help rebuild. this tradition stems from the days of the pioneers. it's this same trait that moved the american people to come to the aid of their neighbors overseas after the war, to europe under the marshall plan they had an effort to help world recovery.
12:56 pm 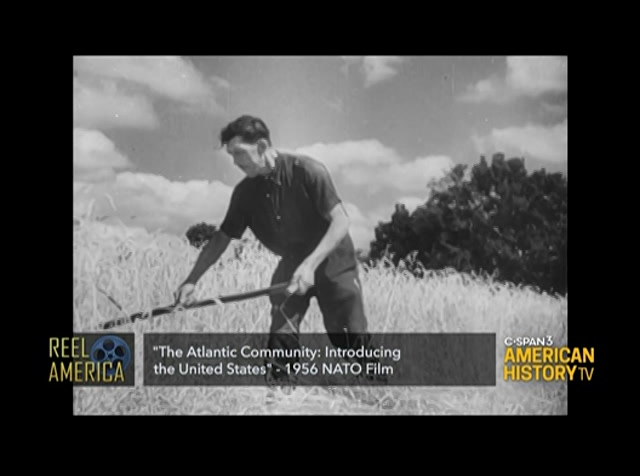 with europe america has bonds of kinship and to preserve their common freedom, the nato alliance was formed. again, the u.s. forces left for europe to stand with their allies as guardians of peace. their contribution to nato's ground forces in europe some six divisions and over 30 tactical air squadrons. nato naval headquarters in norfolk, virginia, points up the role of the u.s. navy in helping to guard the sea lanes between north america and europe. ♪ on patrol is the world's first
12:57 pm 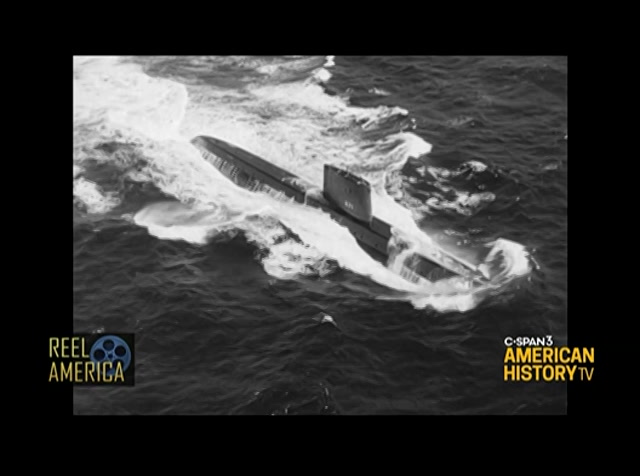 atomic powered submarine, the nautilus. >> a vital factor of allied airpower is long-range jet, an imposing array of these american planes back up the strength of nato. and to man them, airmen expertly trained. u.s. maneuvers substitute helicopters for landing barges. constant innovation makes the united states a strong ally. the united states contributes also to the civilian direction of nato, sitting at the weekly conference sessions of the
12:58 pm 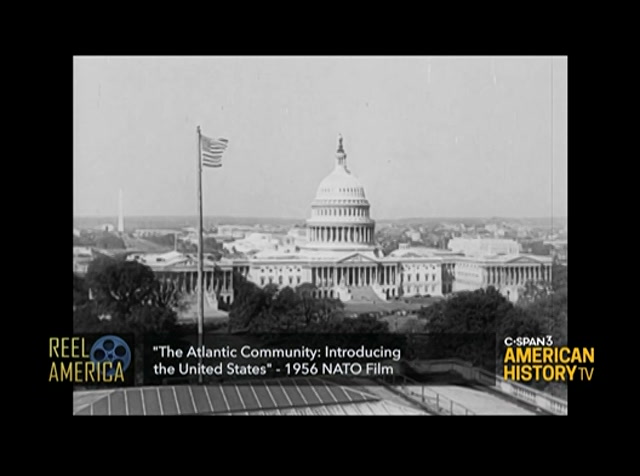 permanent council. to bolster this effort for collective defense stand the resources and resolve of the american people expressed by their elected representatives in congress. their hope is that behind the shield of nato, the atlantic community can build a better world for all. to that end, the united states is sharing with other nations its knowledge of nuclear energy for peaceful purposes. as president eisenhower has repeatedly said, the atomic age must become the blessing not the curse of mankind. atomic energy is already producing electric power, as in this experimental plant in the state of idaho. the use of nuclear energy means further progress in almost every field of science.
12:59 pm 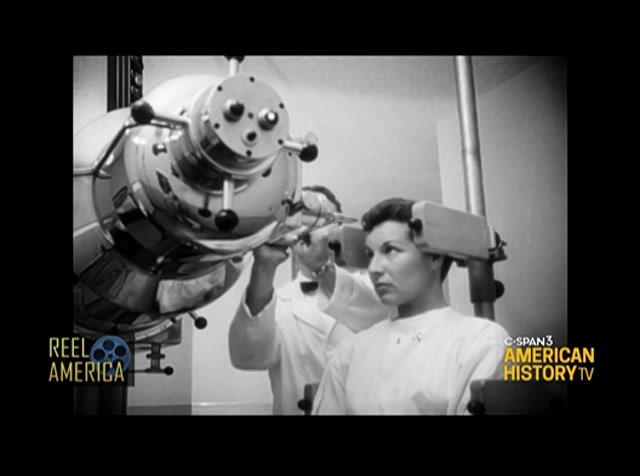 it seems certain peace in this atomic era can lift mankind to new heights of well-being. meanwhile conventional natural resources continue to serve the atlantic community. the united states produces nearly half of the world's petroleum. another contribution is the abundance made possible by modern farming techniques. new methods have made the miners job safer and more rewarding. the more advanced mines have become highly mechanized underground factories.
1:00 pm 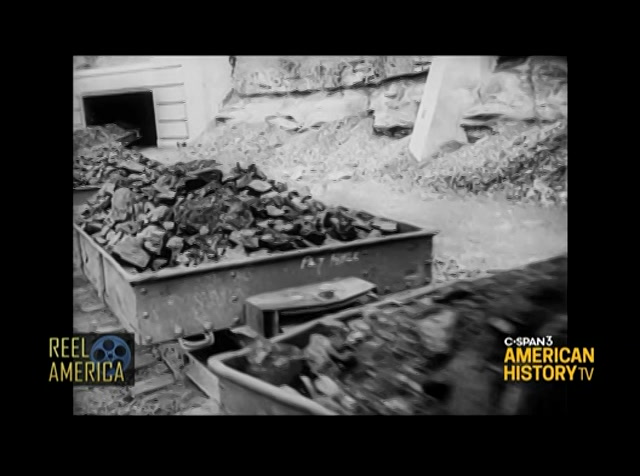 1,200 blast furnaces have a capacity of 130 million tons of steel a year. what makes for america's record output? it's not only her natural resources, it's mass production, constant modernization of plants, and the search for new techniques. today nearly 94% of heavy industrial labor is done by machine. the manufacturing industry serves a large internal market and supply a sizable output for world trade. the machine has increased the individual worker's skills,
1:01 pm 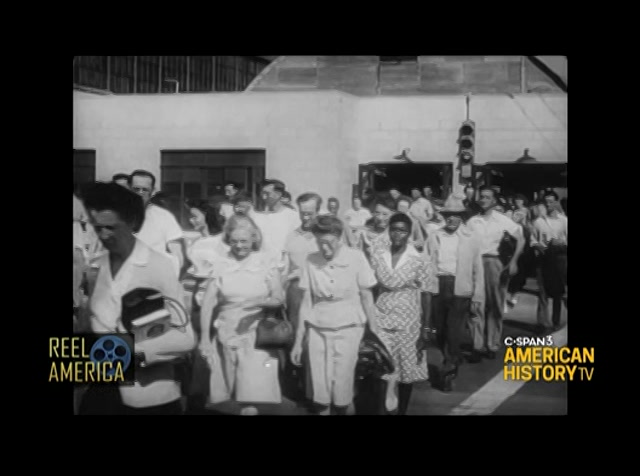 giving him time and opportunity to develop special talents. america's working men and women are the first to benefit from her economy. collective bargaining by labor and management assures a fair sharing of the national income. since the war, 10 million families have moved into new zì% homes. the trend is away from city apartments to home ownership in the suburbs. after a hard day's work, a man looks forward to a home he can be proud of. it's a time to settle down to the joys of family life, the quiet, intimate hours of the home, the children forever asking for just one more story.(
1:02 pm 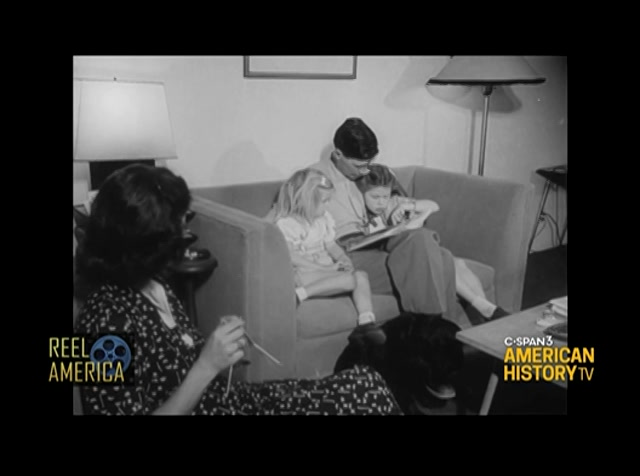 on holidays families take to the roads. in the spring and summer they go to see their favorite baseball teams in action. this particular sport is sometimes called the national pastime. ♪ in the fall americans throng to football games. their brand is different from soccer. but to them it's just as exciting. ♪ but a man likes to go off by himself, too. that fish sure makes the day a perfect one.
1:03 pm 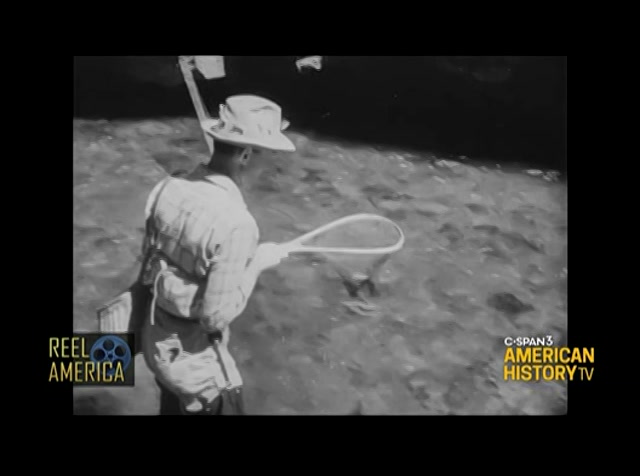 on days off, many like to putter in their gardens. just taking it easy. it's a good day to go on a picnic in one of the many public parks. ♪ for leisure or study there are the public libraries. there are many in america and an important part of the nation's cultural life. there is, of course, a vigorous contemporary american literature. and among u.s. readers a
1:04 pm 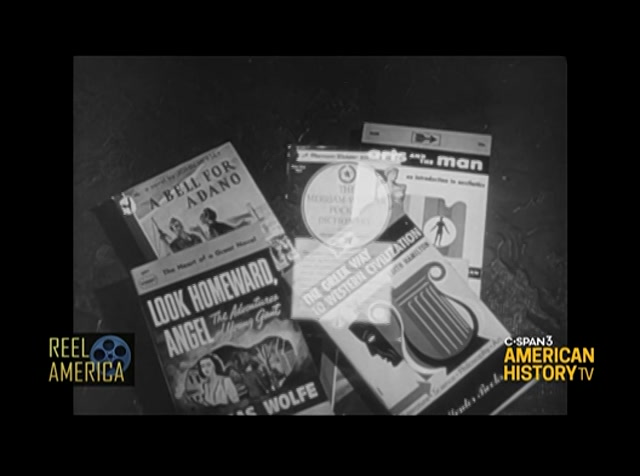 widespread appreciation of foreign writers, past and present. american art flourishes in a climate of freedom and exuberance. typically there is much participation in this field. amateur as well as professional interest is widespread. u.s. communities sponsor hundreds of symphony orchestras and vie with one another to support music of all kinds. ♪
1:05 pm 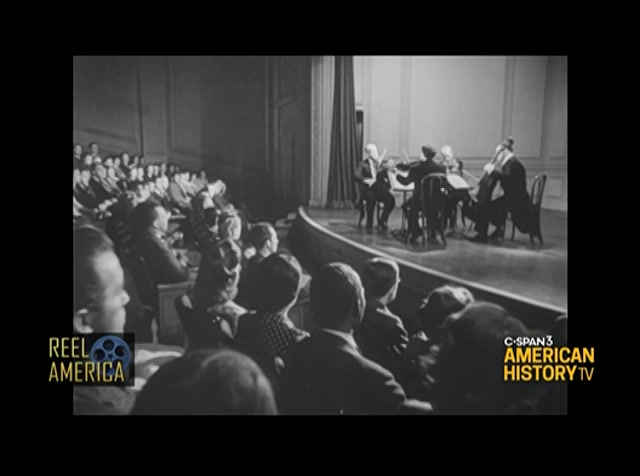 it is in music that americans find their closest kinship with the culture of the old world. ♪ ♪ when that music was written, most of america was wilderness. ♪ the people who settled the wilderness came from europe, and this is what they built.
1:06 pm 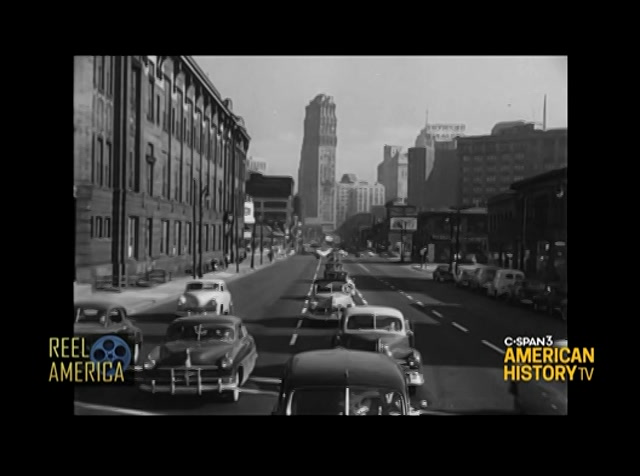 chicago -- detroit -- minneapolis -- st. paul -- st. louis -- new orleans -- pittsburgh -- the united states is young, as nations go, and fortunate in what it has been able to accomplish in such a few years. ♪ it owes much to older traditions and ideals, to concepts of freedom and law given fresh meaning on new soil. ♪
1:07 pm 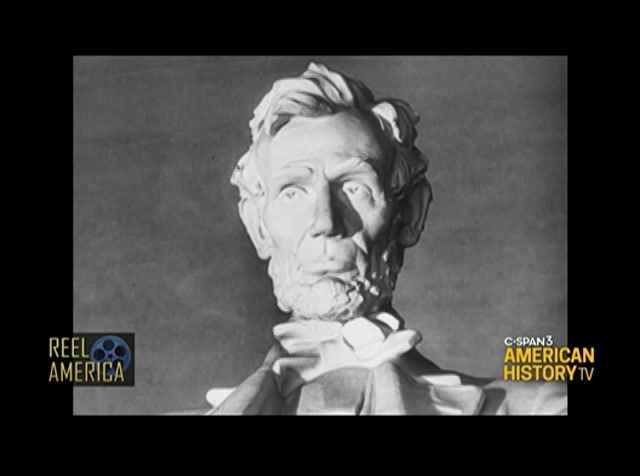 among these principles is the echoing resolve of abraham lincoln, that government of the people, by the people, and for the people shall not perish from the earth. ♪ ♪ week nights this week, we feature american history tv programs to preview what's available every weekend on c-span3. tonight a look at first ladies. susan ford bales daughter of
1:08 pm 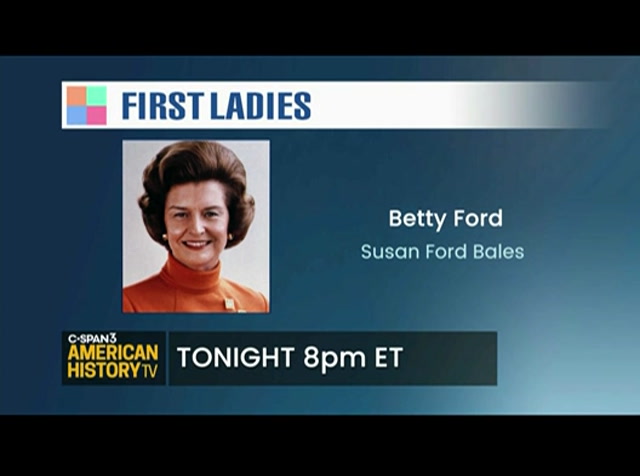 gerald and betty ford reflects on the family's time in the white house with former abc news white house correspondent ann compton. they focus on first lady betty ford and her impact on american society in this forum hosted by the white house historical association. watch tonight beginning at 8:00 p.m. eastern and enjoy american h history tv offer c-span3. you're watching american history tv, every weekend on c-span3, explore our nation's past. american history tv on c-span3 created by america's cable television companies. today we're brought to you by these television companies who provide american history tv to viewers as a public service. up next, boris johnson talks about his book "the churchill factor: how one
left
right
Borrow Program
tv

"The Atlantic Community" is a series of twenty-minute films produced between 1954 and 1956 and financed by the U.S. government. The series was designed to familiarize NATO member countries with the culture, history, industries, tourist attractions, and military contributions of their NATO partners and was distributed in many different languages for television and cinema audiences. This episode is an introduction to the United States for audiences in Europe and Canada.