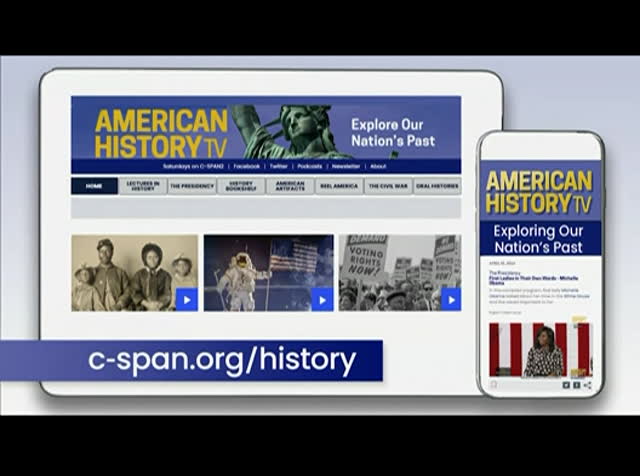 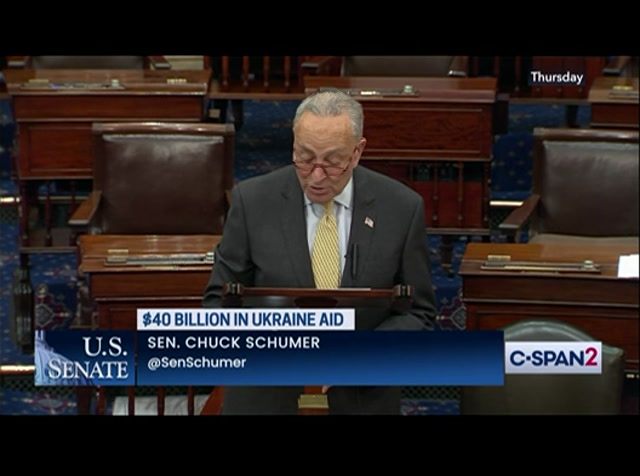 consent on behalf of myself and leader mcconnell. let me explain the unanimous consent. as the war in ukraine extends into its third month, we have a moral obligation, a oral obligation -- a moral obligation to stand with ukraine in its fight against putin's immoral war. earlier this week, the house passed a ukraine package with overwhelming bipartisan support. it should be no different here in the senate. the package is ready to go. the vast majority of senators on both sides of the aisle want it. there is now only one thing holding us back, the junior senator from kentucky is preventing swift package of ukraine aid because he wants to add, at the last minute, his own changes directly into the bill. his change is strongly opposed by many members from both parties. he is not even asking for an
3:21 am 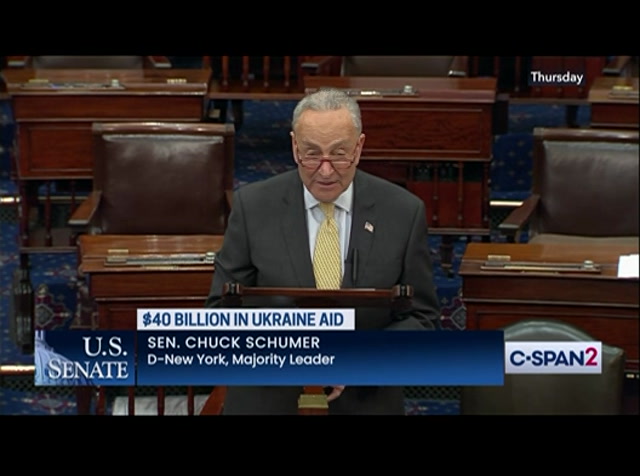 amendment. he is simply saying my way or the highway. when you have a proposal to amend a bill, you can't just come to the floor and demand it by fiat. you have to convince other members to back it first. that is how the senate works. if every member held every bill in exchange for every last little demand, it would mean total and permanent paralysis for this chamber. the junior senator from kentucky knows that perfectly well. he knows that's not how this chamber works. again, when you have a proposal to change a bill, you have to convince members to support it. the junior senator from kentucky has not done that. so right now in conjunction with leader mcconnell, i'm giving senator paul an opportunity to do just that. i'm offering to hold a vote on
3:22 am

his amendment, even though i disagree with it. let the chamber speak its will. let both sides of the aisle have input. and for heaven's sake, let's get ukraine funding done asap. we must keep our promise to the people of ukraine, and i hope the junior senator from kentucky does not stand in the way of keeping that promise. if senator paul persists in his reckless demand, we will not allow him to insert his lang into this bill without a without and all he will accomplish is to single-handedly delay desperately needed ukraine aid. i yield to the republican leader. mr. mcconnell: madam president? the presiding officer: the republican leader. mr. mcconnell: as i said earlier today, the ukrainian people are fighting valiantly in a war they didn't ask for. their brave self-defense is literally -- has literally
3:23 am 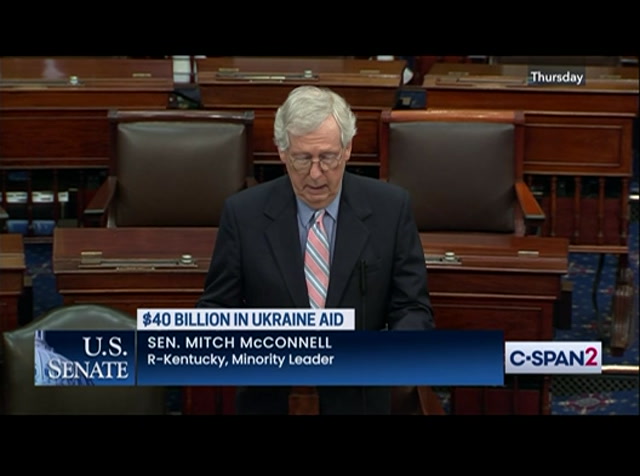 shocked the skeptics and inspired freedom-loving people all around the world. ukraine is not asking us to fight this war. they're only asking for the resources they need to defend themselves against this deranged invasion. and they need this help right now. sending lethal assistance to ukraine is not just some kind of fill l.a.n. three pee. this conflict has direct and major consequences for america's national security and america's national interest. russia's aggression cannot -- cannot -- be allowed to continue cost-free. so i understand my friend and colleague from kentucky would like changes to the bill. those changes are not acceptable to the democratic majority, as we've just heard, so i think there's a simple way to solve this. we should vote on senator paul's amendment and then we should pass the supplemental, and we
3:24 am 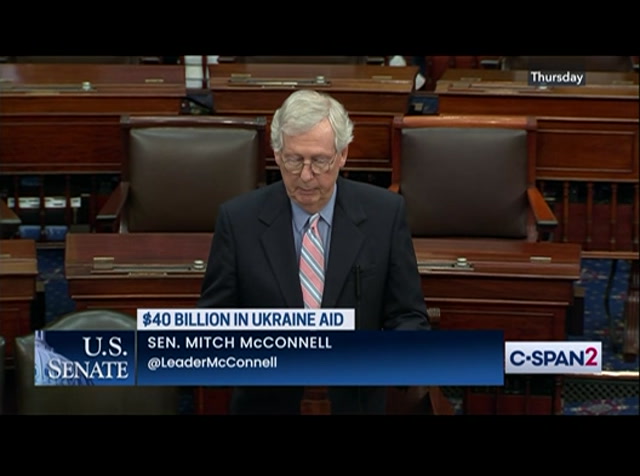 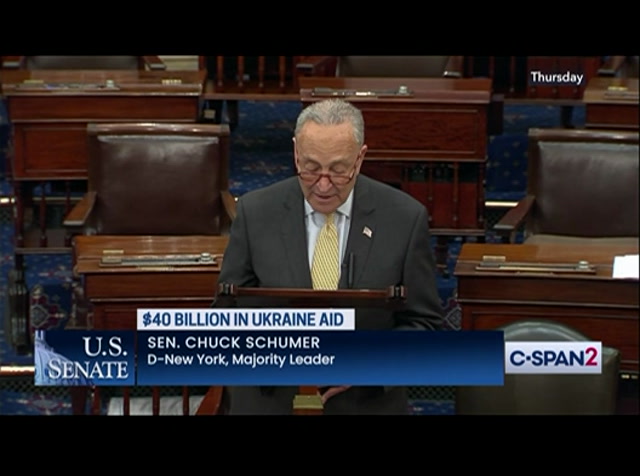 action or debate. the presiding officer: is there an objection? mr. paul: madam president? the presiding officer: the senator from kentucky. mr. paul: reserving the right to object, my oath of office is to the u.s. constitution, not to any foreign nation and no matter how sympathetic the cause, my oath of office is to the national security of the united states of america. we cannot save ukraine by dooming the u.s. economy. in march, inflation hit a 40-year high. gasoline alone is up 48%, and energy prices are up 32% over the last year. food prices have increased by nearly 9%. used vehicle prices are up 35% for the year, and new vehicle prices have increased 12% or more. yes, inflation doesn't just come out of nowhere. it comes from deficit spending. the united states spent nearly $5 trillion on covid-19 bailouts, leading to one of the highest and most sustained levels of inflation in u.s. history. americans are feeling the pain,
3:26 am 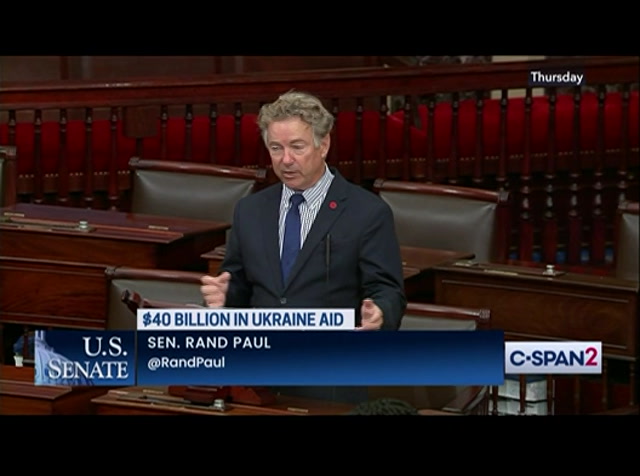 and congress seems intent only on adding to that pain by shoveling more money out the door as fast as they can. this bill under consideration would spend $40 billion. this is the second spending bill for ukraine in two months, and this bill is three times larger than the first -- larger than the first. our military aid to ukraine is nothing new, though. since 2014, the united states has provided more than $6 billion in security assistance to ukraine. in addition to the $14 billion congress authorized just a month ago. if this bill passes, the u.s. will have authorized roughly $60 billion in total spending for ukraine. for those who say this is not enough, for those of new this chamber who say that our military spending is never enough, let's put $60 billion into perspective. according to he willias usef, kiev would become the largest yearly recipient of u.s. military aid over the past two
3:27 am 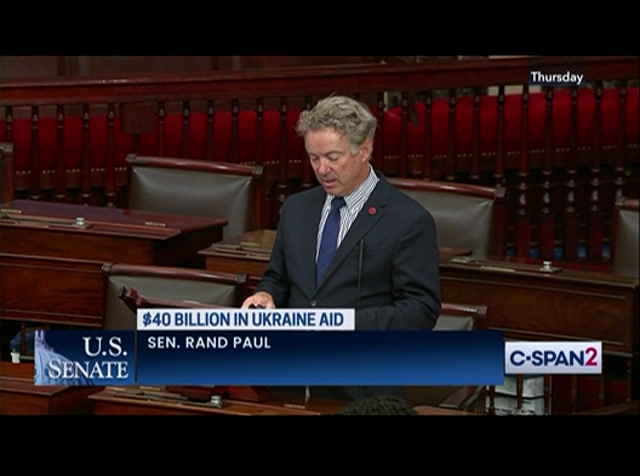 decades. except for the five decade, it is more than any other country spends on their entire military expenditures. if this gift to ukraine passes, our total aid to ukraine will almost equal the entire military budget of russia. and it is not as if we have that money lying appeared. we will have to borrow that money 234 china to send -- from klein to send it to youth the cost of this is more than the u.s. spent during the first year of the u.s. conflict in afghanistan. congress authorized force and and the president certainty troops into the confident. this proposal towers over domestic priorities as well. the massive package of $60 billion dwarfs the $6 million spent on cancer research annually. $60 billion is more than the amount the government collects in gas taxes each year to build roads and bridges. the $60 billion to ukraine could fund substantial portions or
3:28 am 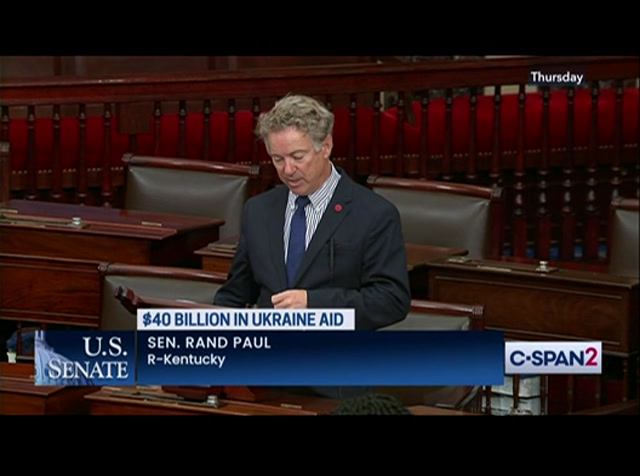 entire large cabinet departments. it nearly equals the entire state department budget. the $60 battalion billion exceeds the amount for the department of energy. and congress just wants to keep on spending and spending. our allies and partners have sent aid to ukraine. some of them even broke long-standing traditions. others are stepping up to defend ukraine like never before. in other words, it's not all about us. it isn't that we always have to be the uncle sam, the policeman that saves the world, particularly when it is on borrowed money. yet the united states accounted for nearly half of what's been spent so far. with a $30 trillion debt, america can't afford to be the world's policeman. the u.s. is trying to recover from the $1.6 trillion we spent on wars in the middle east, not to mention the'd 5 trillion borrowed for covid. we should not forget that the soviet union collapsed in large part not just it was defeated militarily but because it ran out of money.
3:29 am 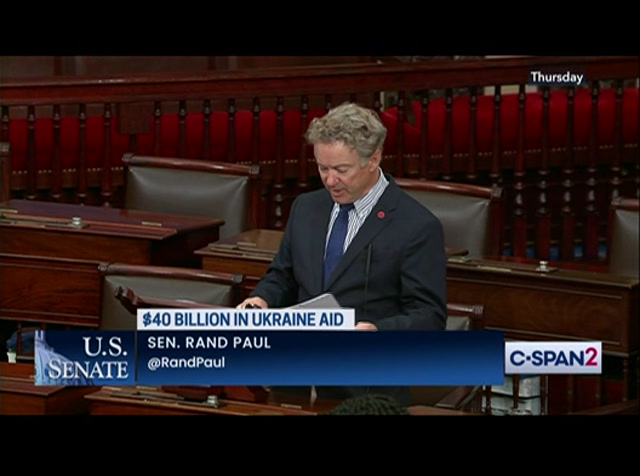 in an attempt to save ukraine, we will doom or will we doom the united states to such a future? in the past two years, the u.s. has borrowed more money than n.i.h. time in our history -- any time in our history. we are experiencing the greatest rate of inflation in four decades. the assault on monetary discipline is untenable. unless we put an end to the fiscal insanity, a dave reckoning awaits us. copping should evaluate the cost of going down this path. we cannot save ukraine by killing our economic strength. so i act to modify the bill to allow a for a special inspector general. this would be the inspector general that's been overseeing the waste in afghanistan and has done a great job. so therefore i ask the senator to modify his request so that the senate proceed to the immediate consideration of calendar 368, h.r. 7691. furthermore, that the paul amendment at the desk be
3:30 am 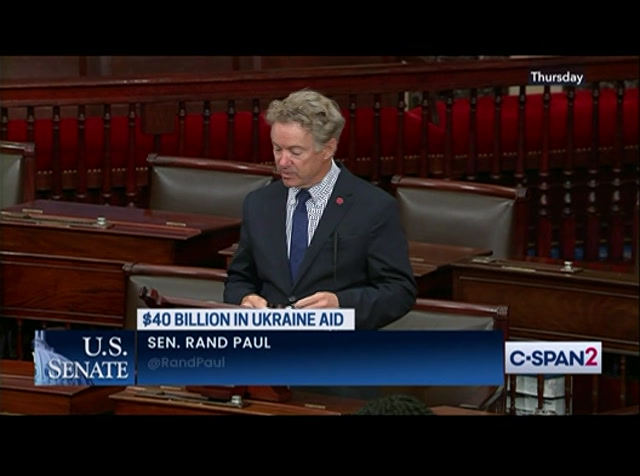 considered and agreed to, the bill, as amended, be considered read a third time, and the senate vote on passage of the bill, as amended, with a 60-affirmative vote threshold for passage. the presiding officer: does the leader so modify his request? mr. schumer: reserving the right to object, it's clear from the junior senator from kentucky's remarks, he doesn't want to aid ukraine. that is not -- that is not the case for the overwhelming majority here. again, all he will accomplish with his actions here todayed is to delay that aid, not to stop it. it's aid desperately needed by a valiant people fighting against authoritarian and defending democracy. so i will not modify. the presiding officer: is there an objection to the original request? mr. paul: i object. the presiding officer: objection is heard. play if
3:31 am 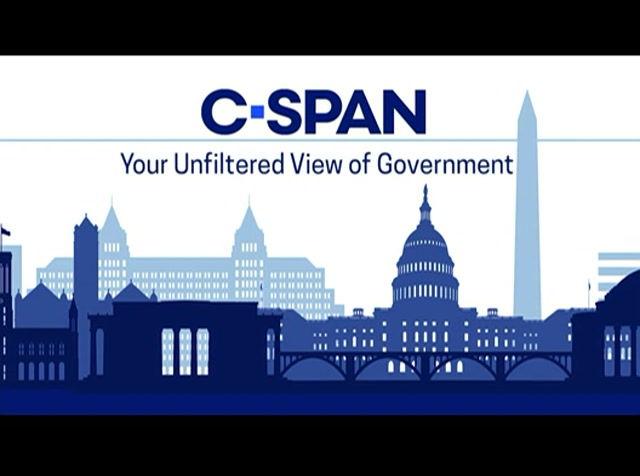 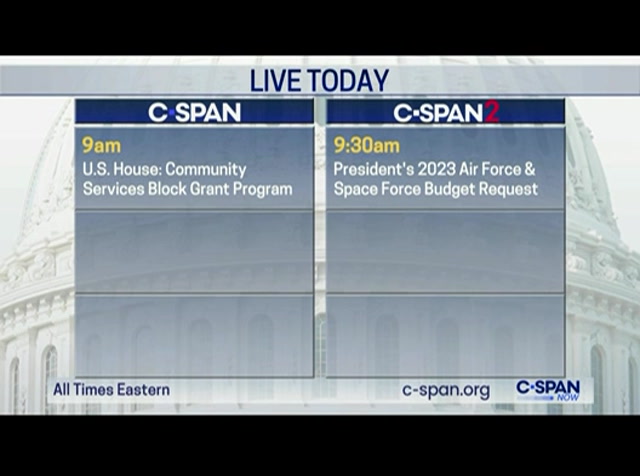 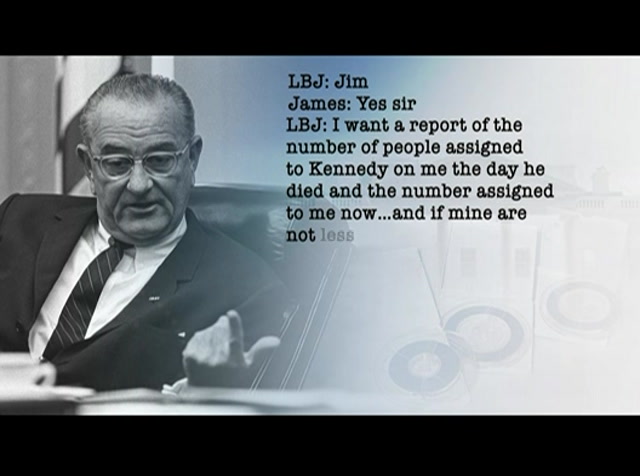 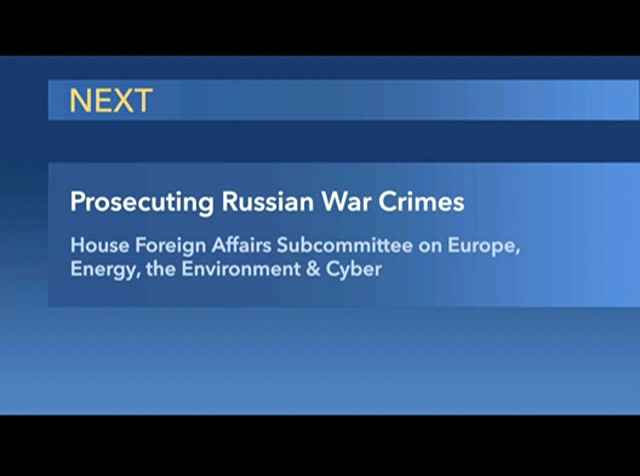 prosecuting war crimes was also discussed. >> good afternoon and i think all of you for participating in today's hearing. this is a timely and critical topic. march 16 the russian federation invaded ukraine the subcommittee held a hearing dedicated to early signs of war crimes and abuses committed by ukraine by the russian military. since that time the u.s. has taken significant steps to support the people of ukraine and their fight for freedom while supporting the careful preservation of evidence
left
right
Borrow Program
tv

Senate Majority Leader Chuck Schumer with Minority Leader Mitch McConnell in agreement asked unanimous consent for the Senate to pass the House-approved $40 bill in Ukraine Aid. Senator Schumer also offered Senator Paul a vote on his amendment to the bill to create an inspector general to oversee the funding for Ukraine. Senator Paul objected to the request. He wanted his IG provision included in the final bill before the final passage vote. Here are their remarks on the Senate floor.