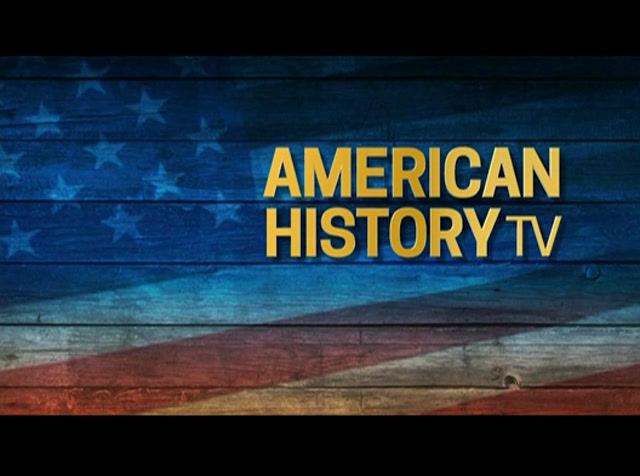 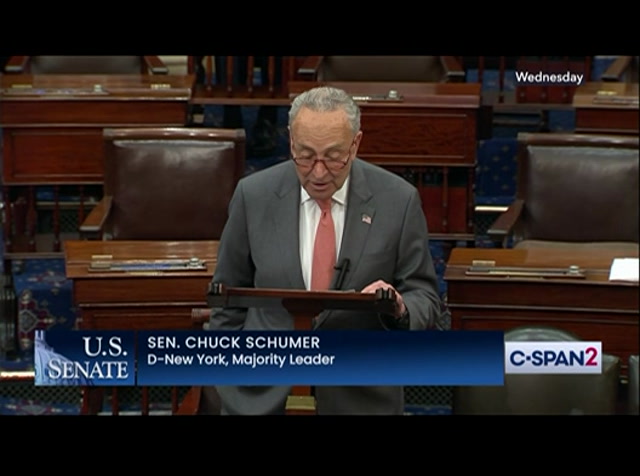 now, mr. president, there's only one way, only one way, to describe the supreme court's reported decision to overturn roe v. wade -- an abomination. such a decision, if it comes to pass, would be an utter abomination. women across america would suffer irreparable harm to their rights, their health, and their dignity. it will go down as one of the worst and most damaging opinions that the court has handed down in modern history, and the court would suffer a mortal blow to its reputation that i fear will last forever. yesterday i pledged that senate democrats will act on legislation to codify roe into law. it is vital that we act quickly
5:00 am 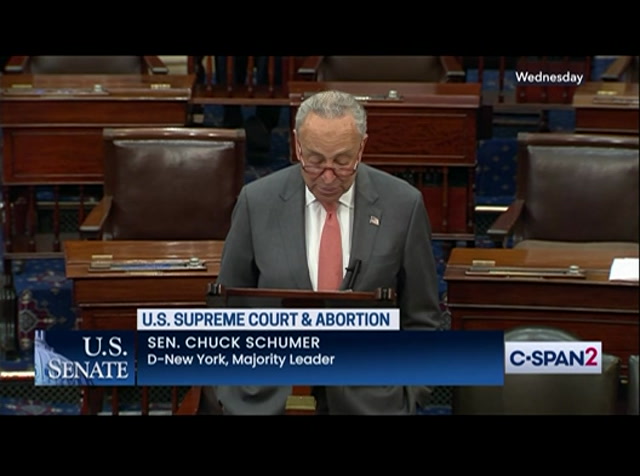 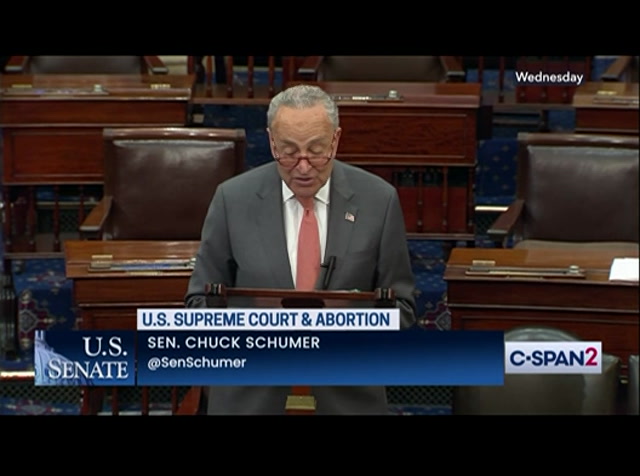 and the republicans on this side of the aisle, right there, were willing accomplices in that deed. let me say it again. the supreme court's decision to overturn roe would have never been possible without leader mcconnell and senate republicans spending years packing our courts with hard-right judges. now republicans are twisting themselves into pretzels trying to distract from this truth. yesterday leader mcconnell said that the real story was somehow the leaks and not the end of roe. can you believe that? the leaks are more important than the rights of 100 million american women? give knee a break. -- give me a break. and when leader mcconnell was asked at his press conference if he was glad roe would be repealed, he wouldn't even answer it. they know where history is
5:02 am 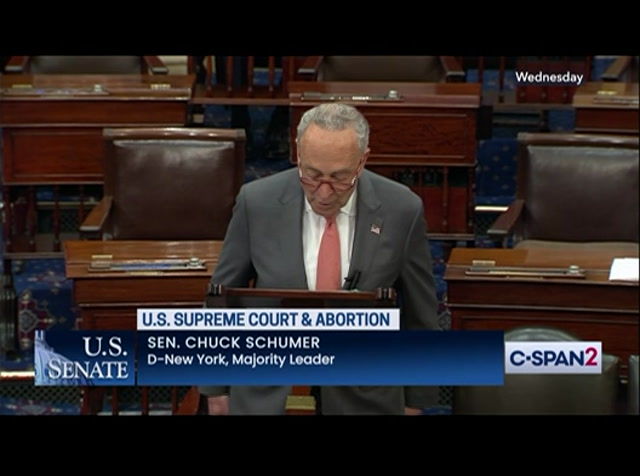 going. they know where the american people are. they know they're on the wrong side of both. so they're trying to, quote, go low key. republicans have spent decades trying to achieve the end of roe and now that they're about to succeed, they're flailing around talking about a leak instead of owning up to their own actions. we won't let them. we know, all of us, why republicans are spending all their focus on the leak. it's because they don't want to focus on roe, where again they're on the wrong side of history and wrong side of the american people. their hypocrisy and refusal to own this decision is utterly shameful. the end of a constitutional right to choose is not some small or inconsequential subject. it's huge. it touches on one of the most personal, most private, most important decisions a woman can
5:03 am 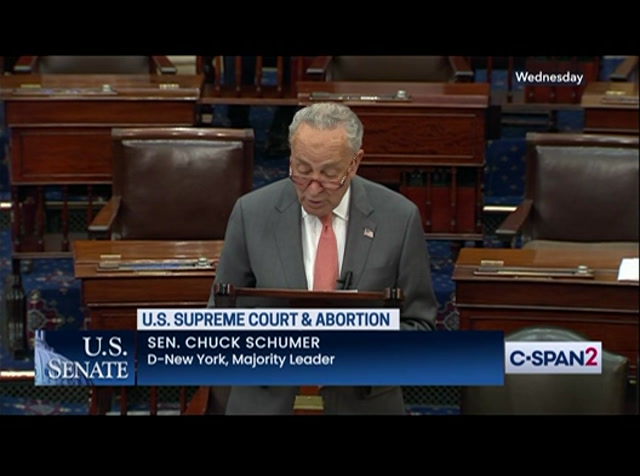 make regarding her body. so it's worth saying again, without senate republicans working years to pack our courts, without them changing rules of the senate to confirm three ideological justices, roe would not, would not, be on the brink of being overturned. and don't take my word for it. leader mcconnell himself expected and hoped for this outcome. when asked in 2019 what confirming president trump's justices meant for the antiabortion movement, he said, quote, there are a number of states who have enacted new legislation that would be winding its way up through the courts and it gives us an opportunity to begin to pick away at roe v. wade. quote, pick away at roe v. wade. so what the court did was not an aberration. it was a plan, a plan by senate republicans, a plan by leader mcconnell. senate republicans spent years rubber-stamping one radical trump judge after another onto
5:04 am 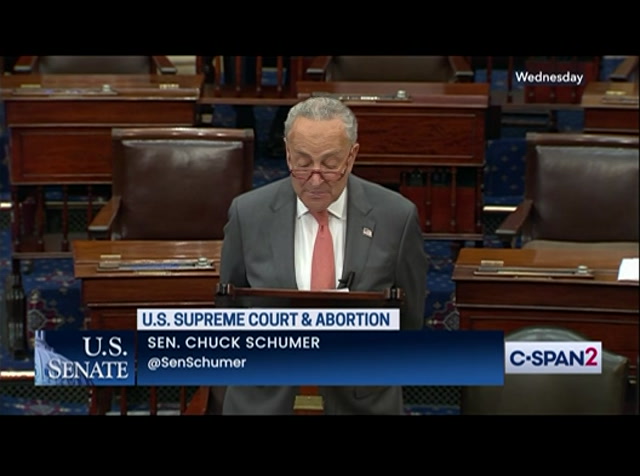 the federal bench in order to, quote, pick away at roe. many of these judges were wildly unqualified. many of them were out of step, far out of step from the american mainstream. what's more, every single republican also changed senate rules to confirm not one, not two, but three trump justices to the u.s. supreme court, assuring a 6-3 conservative majority. some of these justices lied to the senate by misrepresenting their views on respecting precedent about it came to decisions -- when 2 came -- when it came to decisions like roe. and of course after the death of justice scalia, leader mcconnell took the step of preventing the senate from considering the nomination of merrick garland. so nobody here should be fooled. nobody in america should be fooled. the republican leader might not say it, but the end of roe is a culmination of actions taken by the republican leader and the
5:05 am 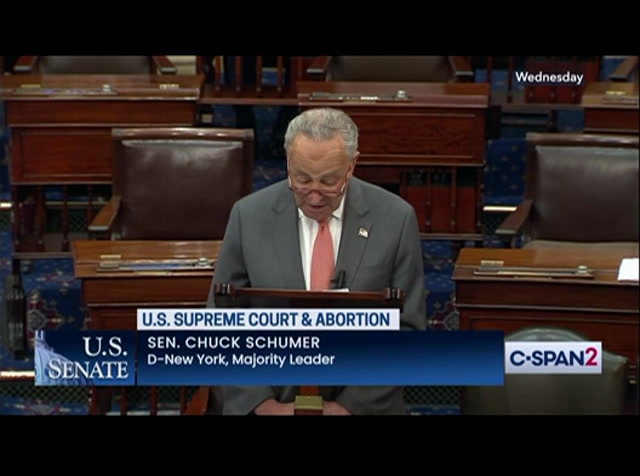 republican party writ large to skew our courts with hard-right, antichoice judges. now that they're close to succeeding, they can't even bring themselves to own up to their own actions because they know -- they know -- just how strongly the american people oppose restricting the right to choose. but, mr. president, this is not the end of the story. republicans cannot hide from the american people and cannot hide their role in bringing roe to an end. they will have to answer to the people this month, this year, and especially this november when american voters go to the polls. and we are going to vote here in the senate to make clear where every single member stands on the right to choose. few issues, few issues are as personal, as private, and as important to americans as whet
left
right
Borrow Program
tv