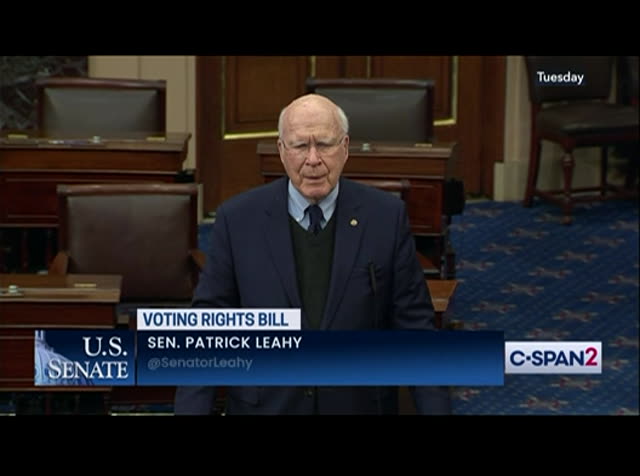 that would send a wonderful signal. we are going to vote. we are all going to vote. you can vote yes or no. people of our state know how we voted. let the american people know how we voted. why we voted. to all americans, republicans, democrats, independents, be part of this country.ur we want you to vote. we will urge you to vote the way we e like, we want you to have e ability to vote even if you have a different point of view. the most important thing as americans is to say that we
7:59 am 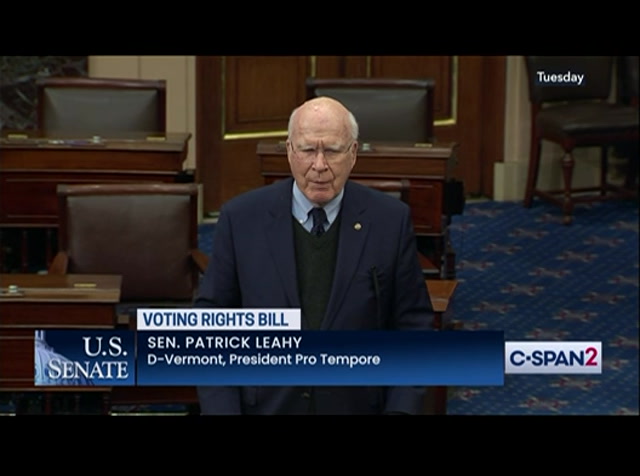 stand for the right for people to vote. every single one of us. i have more to say on this, but i will suggest the absence of a quorum. >> i gave a long detailed speech on the topic that was at hand last week. it is a topic right now that we are focusing on here in the united states senate. voting rights in the majority leader school this week as it was last week, to blow up the legislative filibuster. blowing up the legislative filibuster which in and of itself says a lot. this would save the senate. save the country for hundred.
8:00 am 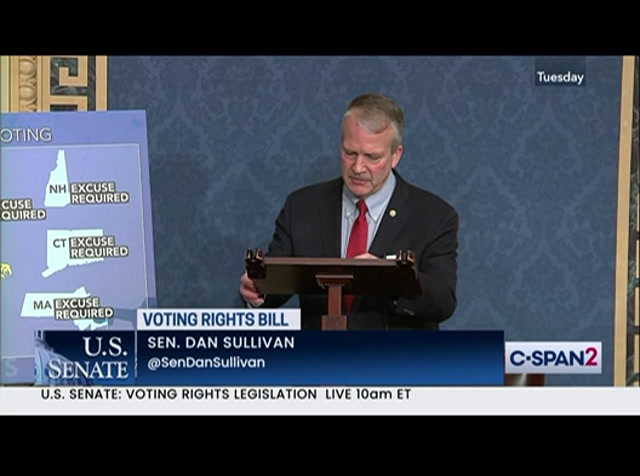 there will be more conversations on these important topics. the president of the united states waited on these two topics. in georgia, in a speech last week, the president is already going down as an infamous speech by president of the united states. let's just say that it did not go very well, the president's speech. i ask all americans to take a look at it. quite disturbing for a whole host of reasons. the president's speech was almost universally and, on the left even. on the right, in the center. i have not seen one u.s. senator come down on the floor this week to defend it. it will be interesting as we debate these issues if anyone does. but i doubt there will be. there many reasons for this.
8:01 am 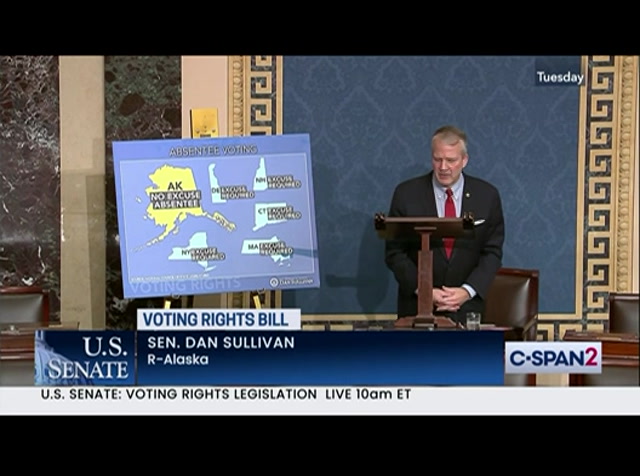 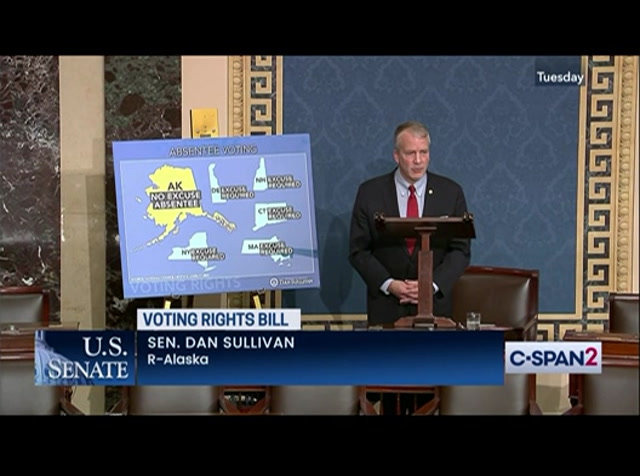 while of course here's why. calling someone a racist and traitor is not the normal logical route to try to persuade one to come over to your side here in neither, mr. president, is claiming that republican senators, and republican legislators in states, and republican state voting laws are so-called jim crow 2.0. when your win your very own states laws, in terms of voting, are some of the most restrictive in the country. this is a narrative i hope our friends in the media will keep an eye on during the debates this week. what ammr i talking about, mr. president? well, first and foremost a talking about majority leader schumer and joe biden, and their
8:03 am 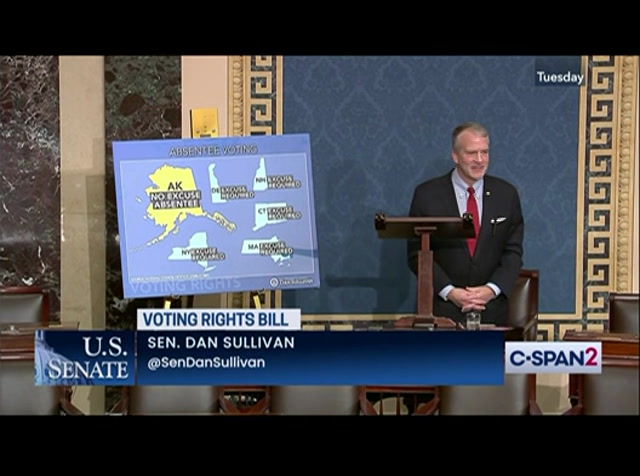 states, new york and delaware, which had some of the most restrictive voting laws in america. let me repeat that. some of the most restrictive voting laws in america come from the majority leader state and the president of the united states state. and yet, listen to their etrhetoric. listen to their rhetoric. republicans and republican states are quote, jim crow 2.0. mr. president, i was on the floor last week talking in particular detail about my states laws. we are all different states here but i knowla my states laws. i know them well as it relates to voting rights. and here's one thing i said last
8:04 am 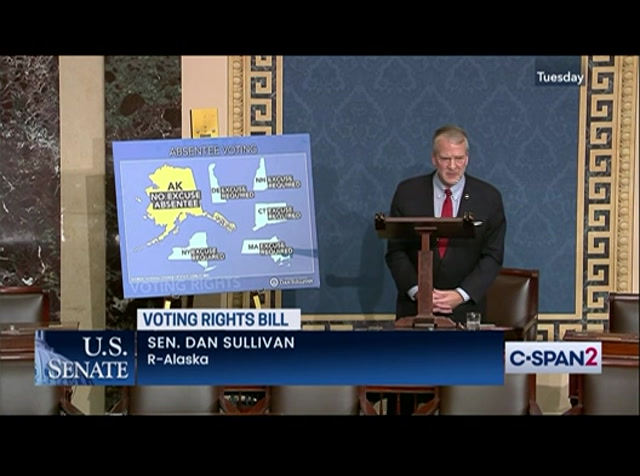 week. in some of the most critical issues in terms of voting rights legislation, early in-person voting, automatic voter registration, and no excuse absentee voting, the republican state of alaska, the great state of alaska has voting laws that are significantly more expansive than the laws of new york, then the laws of delaware, then the laws of connecticut, then the laws of massachusetts and new hampshire. it is a long list, mr. president, a long list. and you can see why senators like me, my constituents in t particular find it more than just a little bit annoying when you have these smug arguments of republican states being jim crow 2.0. let me give you another particular one as a relates to
8:05 am 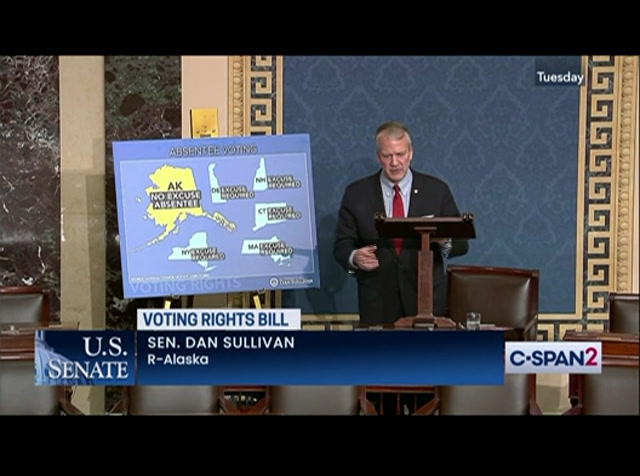 new york, the majority leader's home state. my state has no excuse absentee voting. we have had that for many, many years. many years. now, the state of new york just had a statewide referendum to have same-day voter registration and no excuse absentee voting to meet the high standards that we have in alaska. now, the people of new york recently rejected that. i don't know why. i'm not from new york. i'm sure they had what they thought were good reasons to do that, but if the majority leader keeps coming down calling republican states that restrict voting jim crow 2.0, is he going to go to times square and call his own constituents jim crow 2.0, relative to my great state? because they just rejected doing
8:06 am 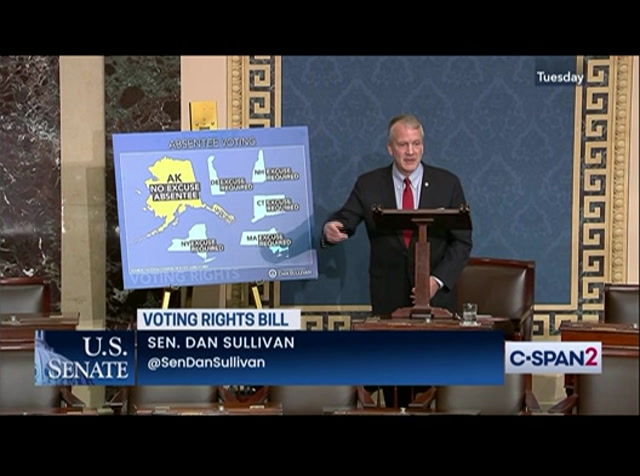 this, restricting voting rights for the logic of the majority leader of the president of the united states. something really wrongom here, . president, on these arguments, and it's not just new york, and it's not just me making these arguments. about were other states are. and again my argument here is not to saybo well, everybody should be like alaska. in the constitution the founders gave the states the fundamental right and obligation of responsibility to design their states laws in terms of voting. but what is really difficult to swallow is that so many of the arguments we are hearing this week and heard last week and we president of the united states come from elected officials, u.s. senators and the president,
8:07 am 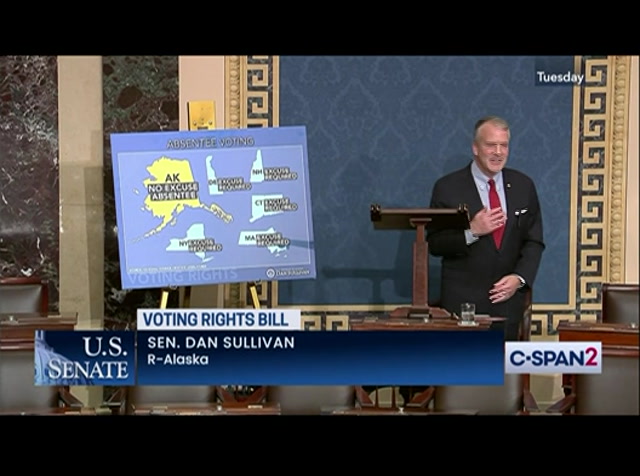 a former senator, who, from states with some of the most least restrictive voting laws in the country. and again, mr. , mr. presids not justg me making this argument. this is an article, mr. president, i submit it for the record last week from the atlantic magazine, the atlantic magazine, not a republican mouthpiece by any measure. i'm going to read extensively from this article, came out last year, because it really makes the point i'm trying to make. quote, biking has assailed georgia's new voting laws as an atrocity i can to jim crow in the 21st century for the impact it could have on black citizens -- again. but even once the gop passed measure takes effect, georgia citizens will have far more opportunities to vote before election day than their
8:08 am 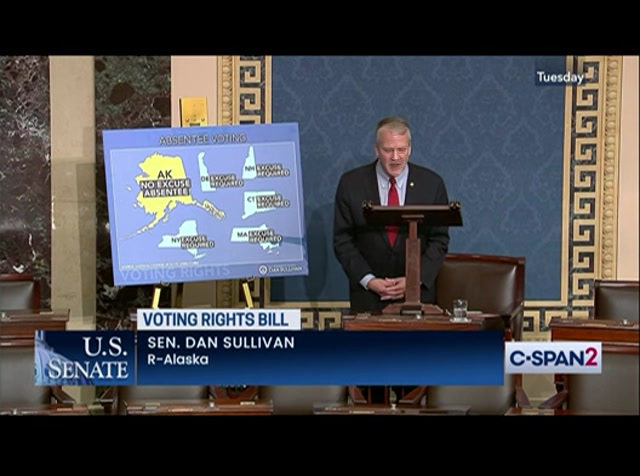 counterparts in the president's home state. where one in the residence is black or latino. the republicans, biden's criticism of the georgia law smacksaw of hypocrisy. they have a point, says duane benson, a voting rights advocate withfi delaware's aclu affiliat. the state is playing catch-up, the state of delaware, in a lot of ways. the article goes on, mr. president. quote, delaware is an anomaly among democrats states strongholds. in this example presents the president's party with an uncomfortable reminder, although democrats like to call out republicans are trying to suppresss voting, the states thy control in the northeast make casting about more difficult than anywhere else.
8:09 am 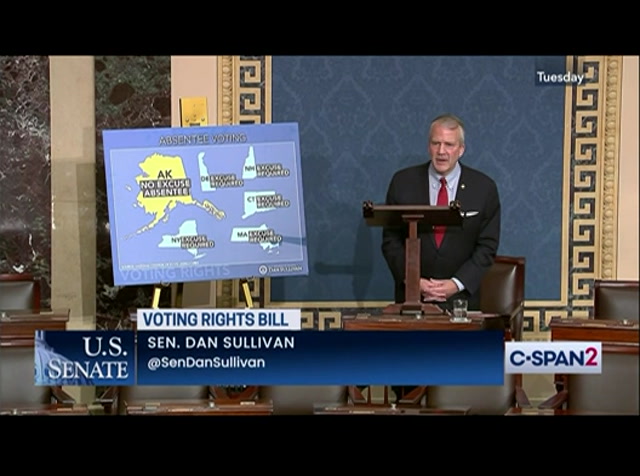 mr. president, i'm going to read that again. i'm going to readt that again. because it's an issue that no one is talking about, and it really smacks of hypocrisy when i see some of my colleagues down here making these great arguments about jim crow 2.0 in republican states. here it is again. the atlantic, quote, delaware is in an anomaly among democratic strongholds. democratic states stronghold. in this example presents the president's party with an uncomfortable reminder. although democrats like to call that republicans for trying to suppress voting, the states they control in the northeast make casting a ballot more difficult than anywhere else, unquote. the article goes on to say, quote, connecticut has no early voting at all.
8:10 am 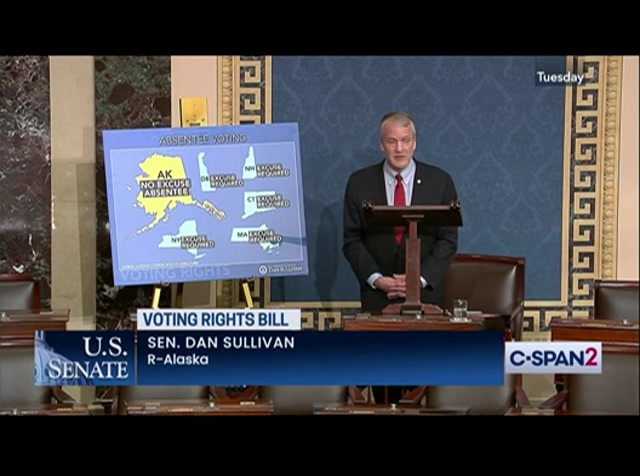 holy cow, my state has early voting. we've had it for years. and new york's onerous rules force voters to change the registration months in advance if you wanthe to participate ina party primary. and by the way, new york just rejected what alaska has come jim crow 2.0 in new york, who knows?us may be, if we are in the president's of logic. the on, in rhode island democrats enacted a decade ago the kind of photo id law that the democratic party has labeled, quote, racist when drafted by republicans. a little bit of hypocrisy there. article goes on. the state, rhode island, also requires voters to get the signatures of not one but two witnesses when casting an
8:11 am 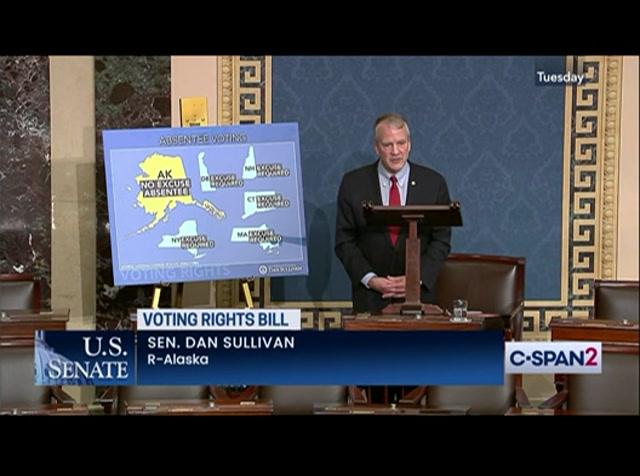 absentee ballot. only alabama, north carolina are similarly strict. article goes on. according to an analysis released this week by the nonpartisan center for election innovation and research, delaware, connecticut, and new york rank in the bottom thirds of states in the access to early and mail-in balloting. and as i just said, new york just rejected it again. you really want at the majority leader will come down and call his citizens jim crow 2.0. mr. president, this is a very important issue, and here's the bottom line. before any of my democratic colleagues come to the floor this week with their insults, with their smug offensive, inaccurate arguments about jim crow 2.0, racist traders,
8:12 am 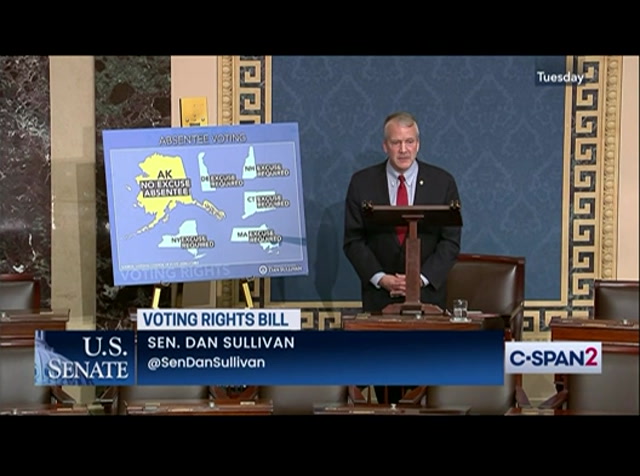 mimicking the president of the united states last week in georgia, i want my colleagues to come and answer this simple question, a verye simple question. why should we listen to you? why should any american take you seriously? when so many of you come from states with the most restrictive voting laws in america. i wonder if any of my colleagues will come down to the floor, particularly those like the majority leader, who loved to rant about jim crow 2.0, when their states are leading the charge in america on restrictive voting? i yield the floor. >> thank you, madam president. i want to say a very special thank you to my colleague, the
left
right
Borrow Program
tv

Senator Dan Sullivan (R-AK) spoke on the floor of the Senate about voting rights legislation being debated.