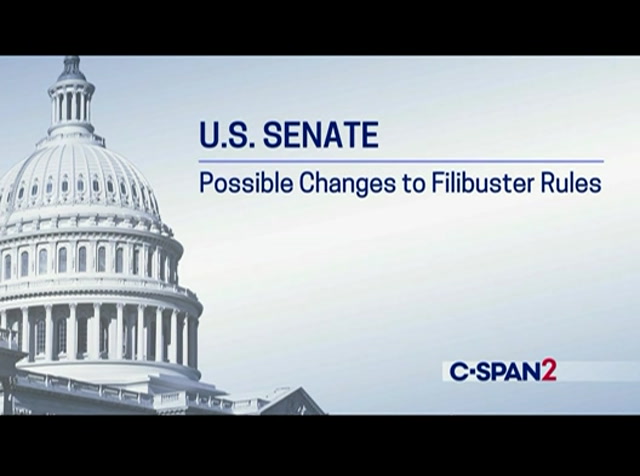 the presiding officer: without objection. mr. mcconnell: something disturbing is happening in washington this week. a group of politicians are trying to set aside election results, overrule american voters and break, break our institutions to get a political outcome they want.
4:32 am 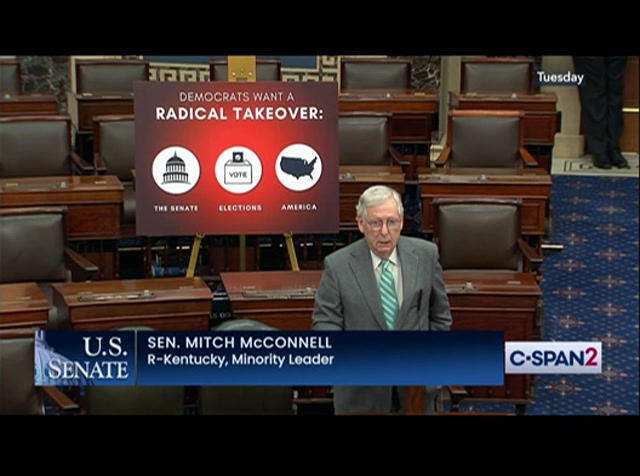 i'm speaking, of course, about the senate democratic leader and the radical left. the senate democratic leader is trying to bully his own members into breaking their word, breaking the senate, and silencing the voices of millions of citizens so that one political party can take over our nation's elections from the top down. in january 2021, a mob tried to intimidate and change the senate, and they failed. in january of 2021, the senate stayed true to itself and it stood strong. but in january of 2022, some of the senate's own members want to permanently damage this
4:33 am 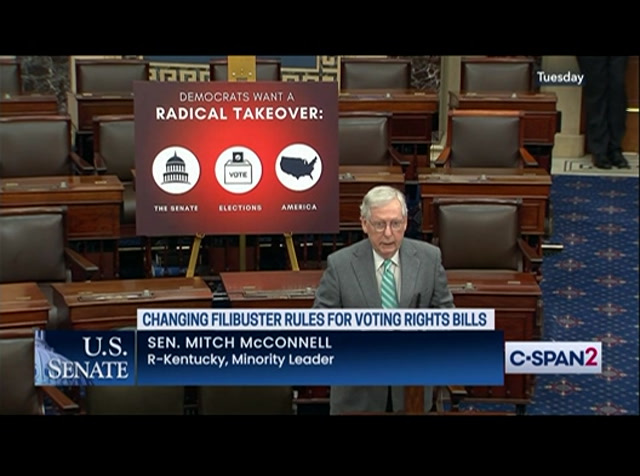 institution from within. they want to shatter its central feature. the democratic leader is using fake hysteria, fake hysteria about 2021 state laws to justify a power grab he began floating actually back in 2019, and an election takeover that was first drafted in 2019. president biden has spread so much misinformation about the basic facts of state voting laws that he was called out and debunked by, listen to this, "the washington post." a sitting president of the united states who pledged to lower the temperature and unite america now invokes the brutal racial hatred of jim crow segregation to smear, to smear states whose new voting laws are more accessible than, for example, delaware.
4:34 am 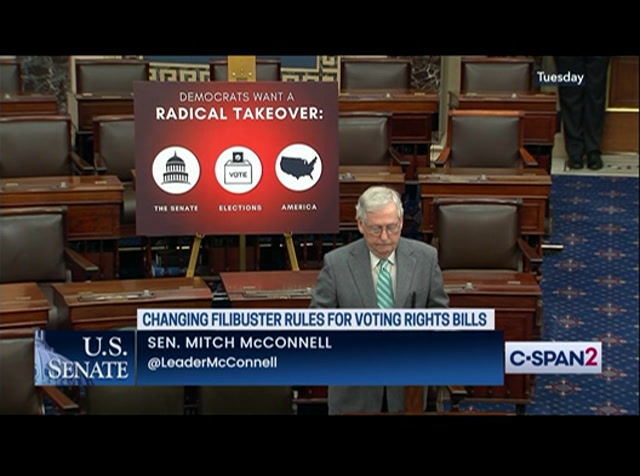 ten days of early voting and excuse only voting absentees in delaware is fine, but 17 days of early voting and no excuse absences in georgia is racist jim crow? senate democratic leader pretends it is a civil rights crisis that georgia has enshrined more, more early voting and more absentee balloting than his own state of new york has ever allowed. this is misinformation. it's a big lie designed to reduce faith in our democracy, justify top-down election takeover, and justify smashing the senate itself. some years back, a veteran democratic senator explained, quote, the nuclear option is ultimately an example of the arrogance of power.
4:35 am 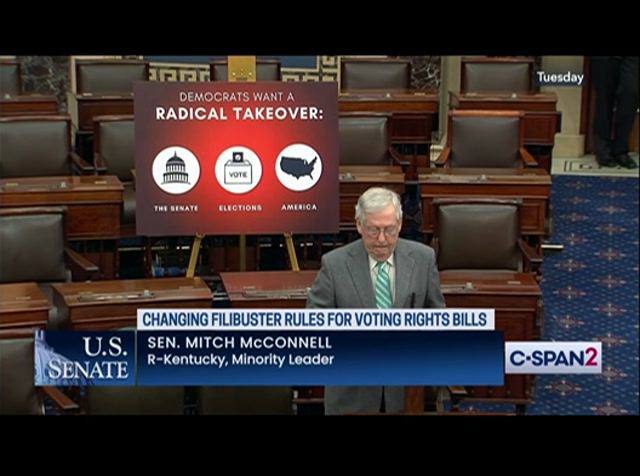 it would transform the senate from the so-called cooling saucer of our founding fathers talked about to a purer majoritarian body. that was then senator joe biden. he continued, at its core the filibuster is not about stopping a nominee or a bill, it's about compromise and moderation. now, before president biden abrummettly -- abruptly reversed this position he held for decades, he was actually in very good company. senator robert byrd of west virginia, the legendary senate institutionalist, was this crucial tradition's fiercest defender. the current democratic leader has true id to invoke senator -- true id to invoke senator byrd in his push to try to vandalize the senate. this is more misinformation. senator byrd went out of his way to rebut leader schumer's
4:36 am 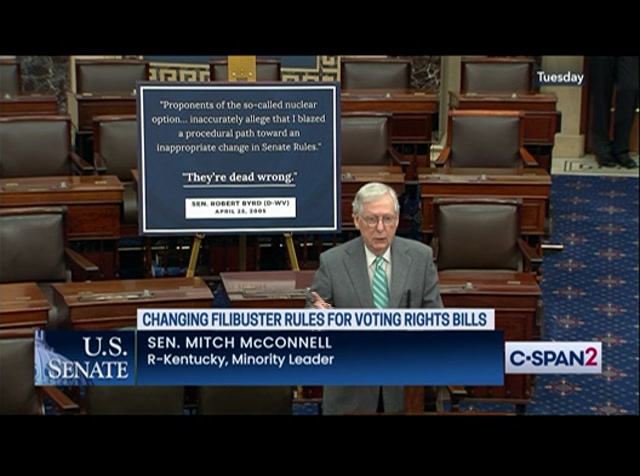 arguments years in advance. here's a direct qoart from senator byrd -- a direct quote from senator byrd, proponents of the so-called nuclear option inaccurately alemg that i blazed a procedural path toward an inappropriate change in senate rules. they're dead wrong, said senator byrd. dead wrong. they draw analogies where none exist and create cockeyed comparisons and fail to withstand the slightest intellectual scrutiny, end quote. that's how senator byrd felt about it. before his death in 2010, senator byrd was completely consistent. quote, i oppose cloture by a simple majority because it would immediately destroy the uniqueness of this institution. minority rights would cease to exist in the u.s. senate, end quote.
4:37 am 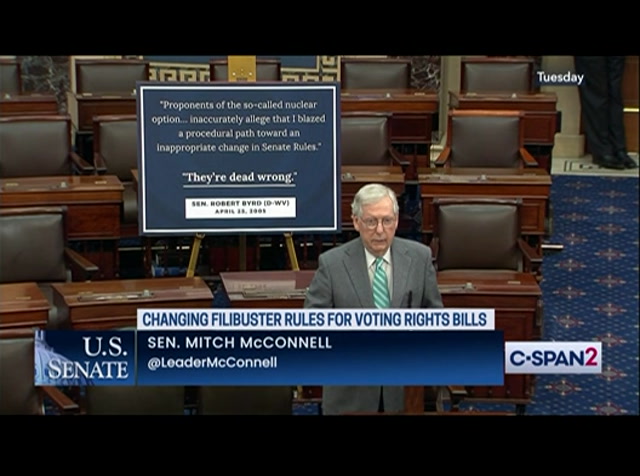 senator byrd shortly before his death. the democratic leader knew how to serve and protect the senate. that democratic leader knew how to serve and protect the senate. this democratic leader wants power so badly he'll misrepresent his own late predecessor if it helps him get it. senator byrd's successor, the current senior senator from west virginia, has eloquently restated the very same points. our colleague, senator manchin, published an op-ed explaining why, quote, there is no circumstance in which i will vote to eliminate or weaken the filibuster. senator manchin. he pointed out that finding compromise across party differences and differing regional interests was never supposed to be easy, but it is the work we were elected to do. he noted that current rules guarantee that rural and small
4:38 am 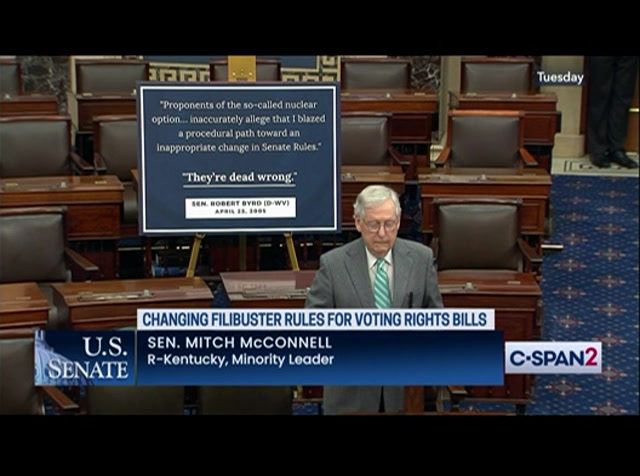 states and the americans who live in them always have a seat at the table. our colleague also pointed out that the 60-vote threshold keeps federal law durable and predictable. quote, if the filibuster is eliminated or budget reconciliation becomes the norm, a new and dangerous precedent will be set to pass sweeping partisan legislation every time there's a change in political control. our nation may never see stable governing again. this has been a key point for senators on both sides, going back generations. in his farewell address before retirement, our former colleague, lamar alexander put it this way, he said, the senate rules exist to, quote, force broad agreements on controversial issues that become laws that most of us will vote for and that a diverse country
4:39 am 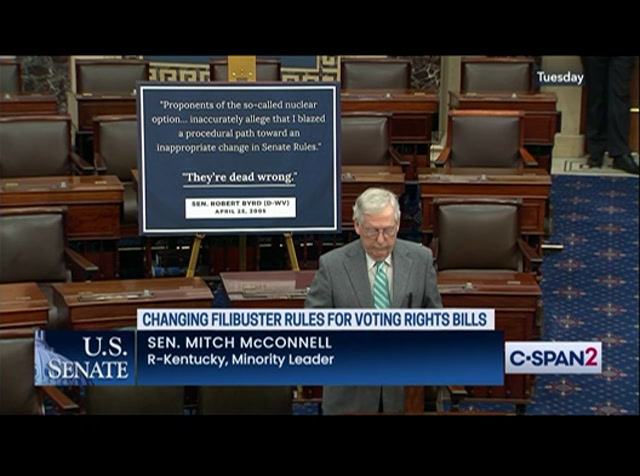 will accept. in other words, major changes need major buy-in. otherwise, every policy would ping pong wildly whenever the gavels change hands. this is a point which our colleague, the senior senator from arizona, has explained powerfully. as senator sinema wrote just a few months ago, the 60-vote threshold compels moderation and helps protect the country from wild swings and radical reversals in federal policy. sometimes, the effect of the filibuster is to block bills outright. republicans are using the tool to stop one-party takeovers. in 2020, republicans used it to kill senator tim scott's police reform bill. but as president biden argued decades ago, the filibuster is about more than what gets
4:40 am 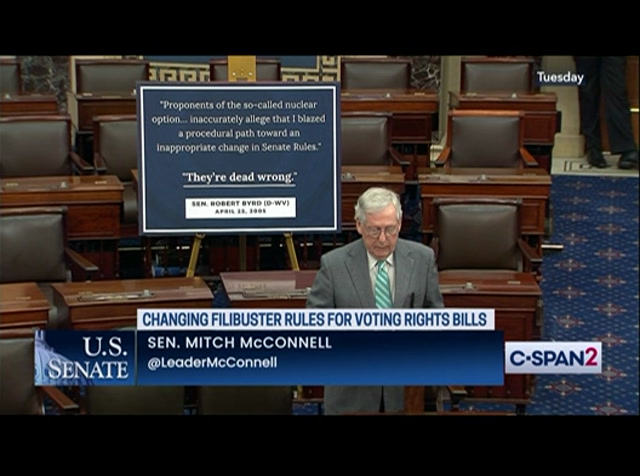 blocked, it shapes almost everything the senate actually does pass. it gives all kinds of citizens and all kinds of states a meaningful voice in nearly everything we do. by breaking the senate, this democratic leader wants to silence the voices of millions and millions of americans. he wants to throw whole regions of the country into a political power outage because those voters don't agree with his radicalism. we'll see which senators have the courage and the principle to put a stop to it. finally, on a more practical level, i want to make something very, very clear. 50 republican senators, the largest possible minority, have been sent here to represent the many millions of americans whose leader -- whom leader schumer
4:41 am 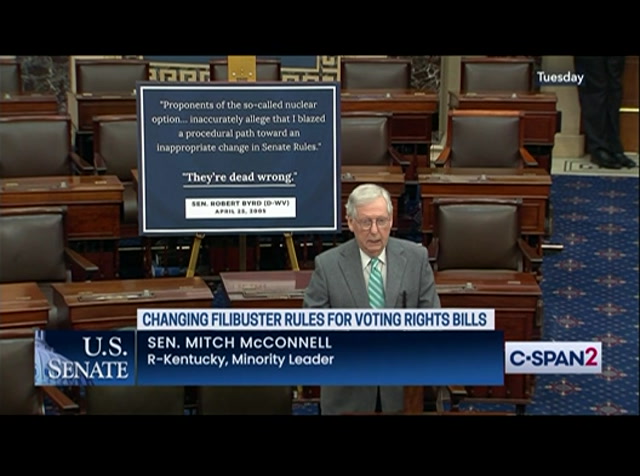 wants so badly to leave behind. so, if my colleague tries to break the senate to silence those millions of americans, we will make their voices heard in this chamber in ways that are more inconvenient for the majority and this white house than what anybody has seen in living memory. last year the senate passed major bipartisan legislation on infrastructure, on hate crimes, on government funding, on competing with china. last year, senators helped speed through noncontroversial nominations. so what would a post-nuclear senate look like? i assure you, it would not be more efficient or more productive. i personally guarantee it. do my colleagues understand how
4:42 am 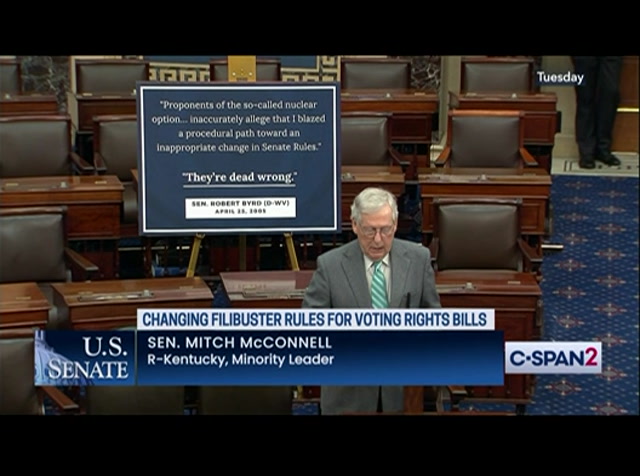 many times per day the senate needs and gets unanimous consent for basic house housekeeping? do they understand how many things would require roll call votes, how often the minority could demand lengthy debate? our colleagues who are itching for a procedural nuclear winter have not even begun to contemplate how it would look. our colleagues who are itching to drain every drop of collegiality from this body have not even begun to consider how that would work. if the democratic leader tries to shut millions of americans and entire states out of the business of governing, the operations of this body will change. oh, yes, that much is true. but not in ways that rewd
left
right
Borrow Program
tv

Senate Minority Leader Mitch McConnell said Senate Majority Leader Chuck Schumer and "the radical left" are bullying Democratic Senators to "break our institutions to get a political outcome they want." He also said President Biden is spreading misinformation about voting restrictions in some states. He hinted that the GOP will object to numerous unanimous consent requests in a "proceudral nuclear winter."