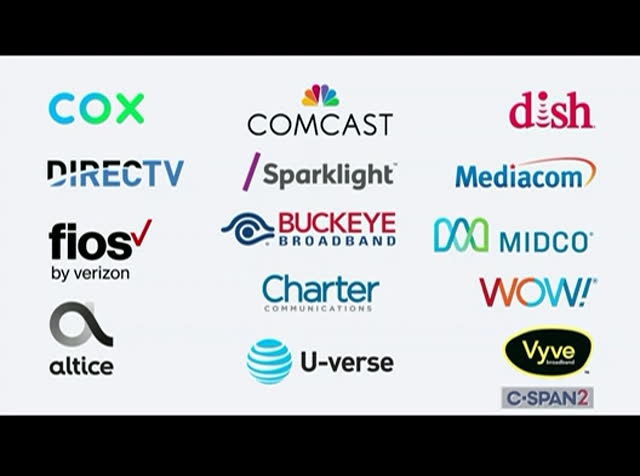 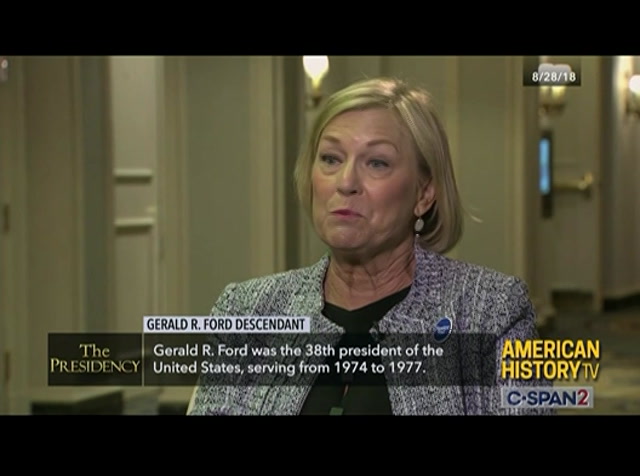 and i never moved until i moved into the white house. i already had secret service protection back and be cut is of the sla i did and my mother didn't which was a strange phenomenon. but the most exciting part of it was moving into a place i had male bathroom and did not have to share with my brothers. [laughter] >> the secret service protection must of been a real shock to your everyday life. >> it was. but i grew up with three older brothers it's like having your brothers around nonstop. we worked with the secret service and i was had a good relationship with them. yes i did disappear once on them that everyone needs to do it to see if you can. it was fine. i still stay in touch with my
7:42 am 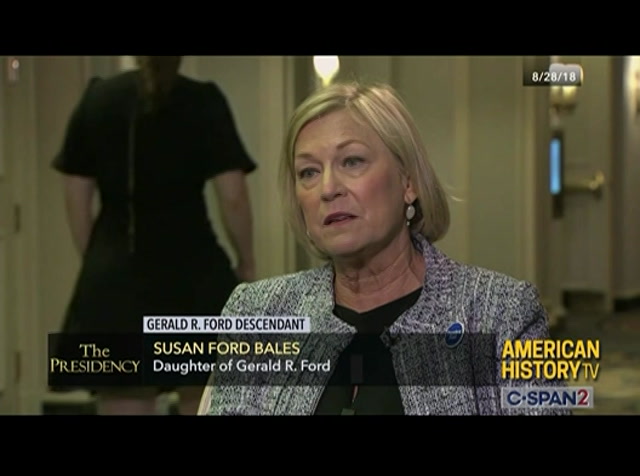 secret service agents. they were great friends and they know a lot of secrets i don't want out. >> we are recording this at the presidential site summit by the white house historical association. how much of your life is devoted to your family experience. >> not as much as most people would think so having three brothers to break that then who will do what so i have that advantage. but i do a lot of stuff with breast cancer work i also do a lot of work with drug and alcohol addiction with the betty ford foundation. so the majority of my speaking i do publicly is breast cancer or drug or alcohol addiction.
7:43 am 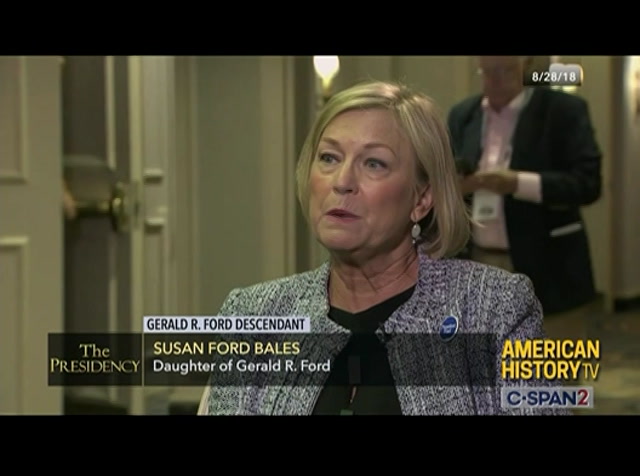 >> it is continuing the legacy. >> it is. that is important because i have totally seen breast cancer and that was huge when she made the announcement she had breast cancer. that has grown leaps and bounds on the common foundation has done so much. drug and alcohol abuse —- abuse addiction has not progressed. but as far as a public service but with laws it has not been as successful with breast cancer and there are so many families out there hurting that need help and know there is hope and hope out there is skyrocketing. host: let's spend a moment on both of your parents because
7:44 am 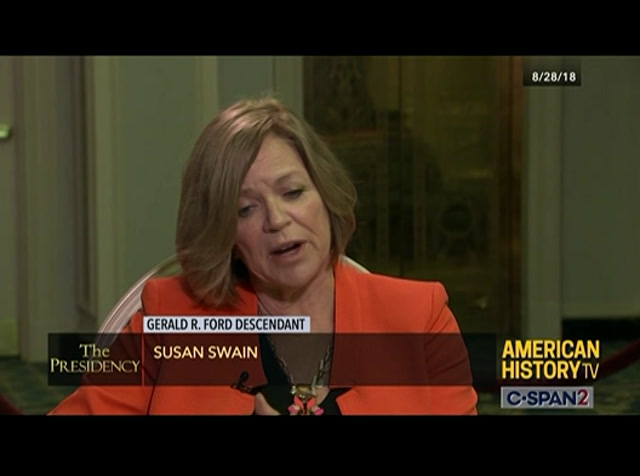 many people watching have memories of their time in the white house. what would you say this far out of your father's legacy? >> you always hear about integrity and those sorts of things when they talk about my dad. but to me, it's a fact he's an unbelievable leader and chose to do things that were so brave. and to be a leader you have to be brave because you have to put america first. he did so i look at that and all the things that he did. his dad would've been 105 this year. and then the things that he did because he put america first were so important that
7:45 am 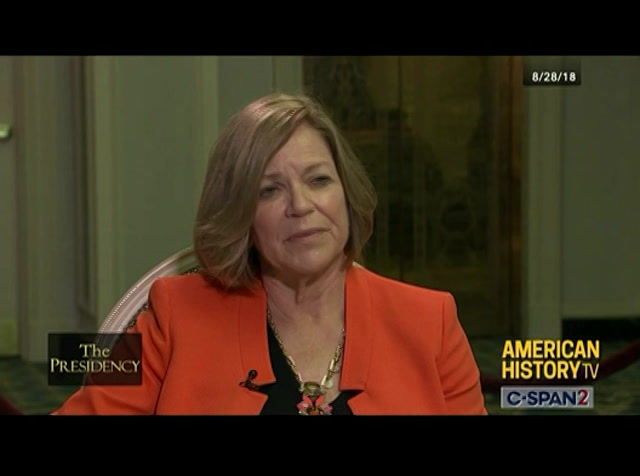 julie makes a leader. >> on your mother's side? it is so simple because because she intended to do the crippled children are the handicapped children because her mother was the president of a hospital in grand rapids michigan and while conducting board meetings my mother was working with children and rehabilitation and teaching them how to dance. but than six weeks after we moved in the white house i became so important to her because it was for her survival just because women and men in america but then it followed up with her drug and alcohol addiction. i have continued both of those
7:46 am 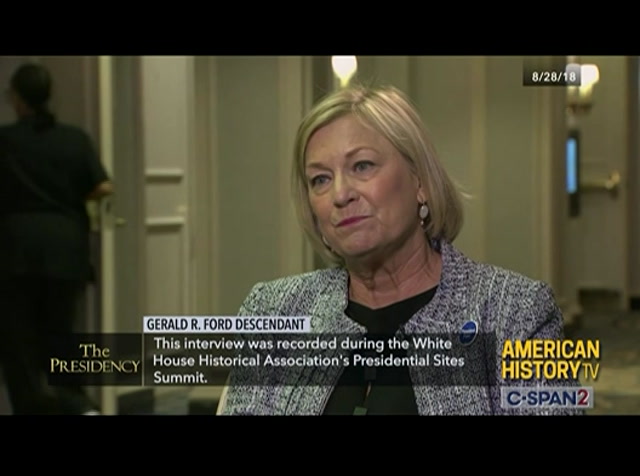 i'm very devoted to them. host: what do they think about the family history and the fact they are born into it? will they continue in the next generation? >> i do think my daughters will. there five granddaughters total. then there are two grandsons. they stepped into this but all of us will continue that generational and my granddaughter is 12. she remembers palm springs. i think she will always have a connection and will be a great grandchild but i think she has the connection. host: reading biographical materials about your father. he had a very interesting childhood. can you tell viewers the story? he was born with a different
7:47 am 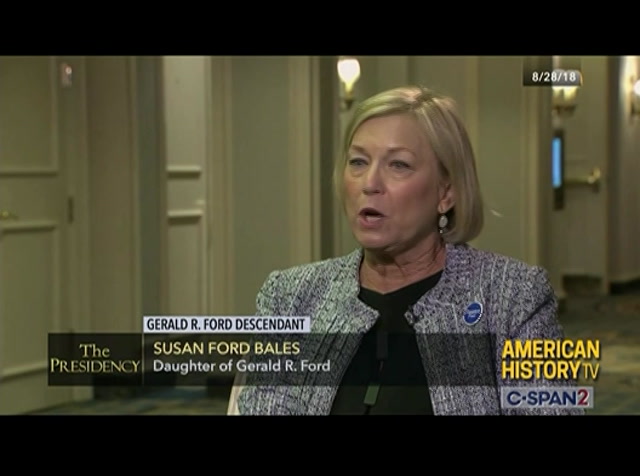 name. >> when people say what does america not know about gerald ford? because so much has been written about him. to me the more interesting thing is the fact biological name and less than six weeks old and got on the train to grand rapids michigan. and she met a man by the name of gerald r ford senior and married him eventually he grew up and was never adopted that we saw he was never adopted by gerald r ford senior as i think of as my grandfather. he just changed his name and chose to change his name in his late teens and early
7:48 am 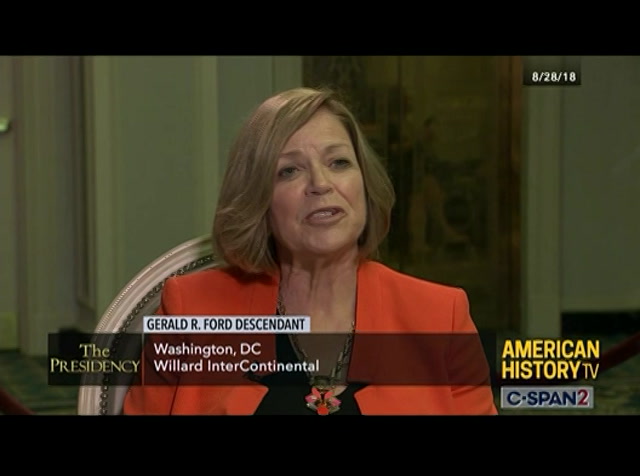 twenties. but that is the grandfather that i know and loved. >> how did your parents meet? >> my parents were divorced and the stories that i have heard is she was dating quite a few men in grand rapids my dad had been in the war and and then my dad went up to one attorney general who was visiting before. >> where she dancer? >> she was. and so they saw this under the streetlight and then my dad said to the other gentleman how serious are you about betty? because i am extremely serious and i wish he would move on. [laughter] so he got what he wanted.
7:49 am 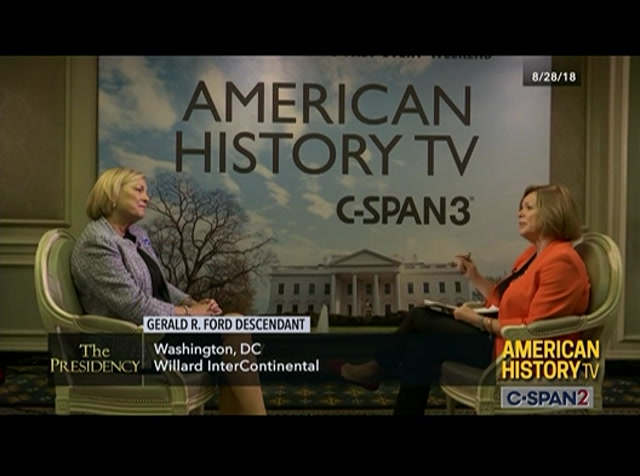 host: how long between when they met and got married? >> not long at all. a very short engagement. he did not announce his engagement to her until much later because he was running for the first in the house and they were so afraid that she would taint his campaign. they were married october 15 and he won the election in october on —- november. host: i also remember that he came to either the rehearsal or the wedding with mud on his shoes? >> he was out campaigning. host: anaheim and was a campaign event. your mother knew what she was getting into. so what would you tell people about the challenges of growing up in a political
7:50 am 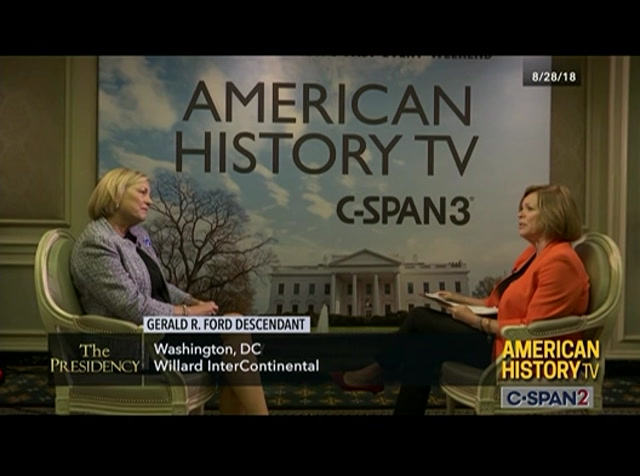 family? and then to see all of the elected officials and then not know about having been there quick. >> i didn't know any other life. i was a congressional brat in my father was congressman and minority leader. going up with other congressional kids and it did not matter what party. we went to schools together. our parents were friends. so when my dad became vice president and then we were supposed to move into the vice presidents house and then it changed again and i became president. so then in my time it has changed so drastically, the advantage to him being the president was that he could fly home every night. so today, my understanding is
7:51 am 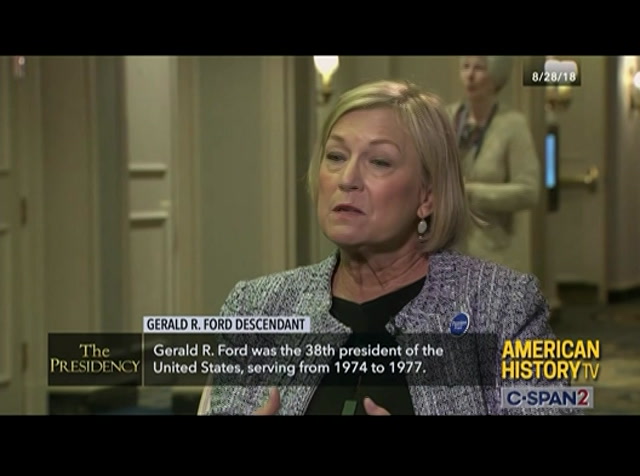 the senators that stay here and have apartments but the family stay home and the district provided that grow up in grand rapids michigan i grew up in alexandria virginia so things changed drastically and they don't socialize together because they work and then go back to their apartments and that is what is hurting. cokie roberts and i spent a lot of time talking about it. her parents and my parents were dear friends. and there is nothing now. the families are back in the home district. host: what is the impact on politics? >> the impact is you can disagree with somebody but they always supported each other in whatever issue was going on. my dad and tip o'neil and mike mansfield were all friends.
7:52 am 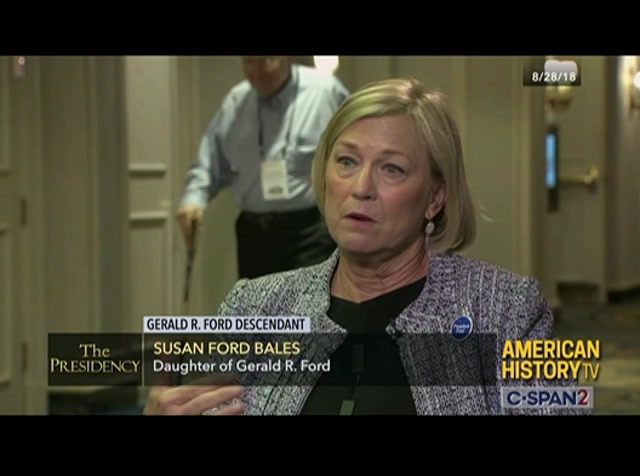 they played golf and socialized you knew them as a person it wasn't just the role or committee that was going on. and you learn to respect that. host: it seems like the white house has only gotten more microscopically examined in the age of twitter everybody has a cell phone to capture pictures. what do we know? >> i was in high school and college when my dad was in the white house. i had the advantage i didn't have to change schools i stayed in washington because i was going to a private school for girls already. i didn't have to walk in as the new kid and your dad is the president of the united states. i truly feel i have and advantage in ms. johnson was
7:53 am 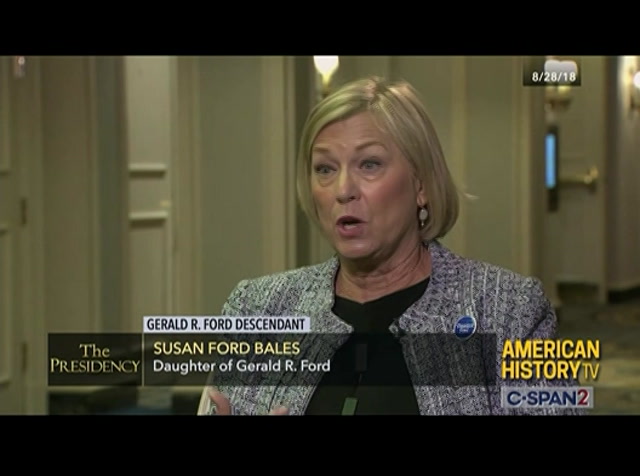 the same way. for all of these to come in and don't know washington and they don't know anybody and then on top of it the 24/7 media which we did not have a goodness because i would have been in so much trouble they follow you. and every little thing that you do. i was criticized for wearing blue jeans i go back and i laughed. and not to have the two.is a total 24/7 news media. >> and those so that is the
7:54 am 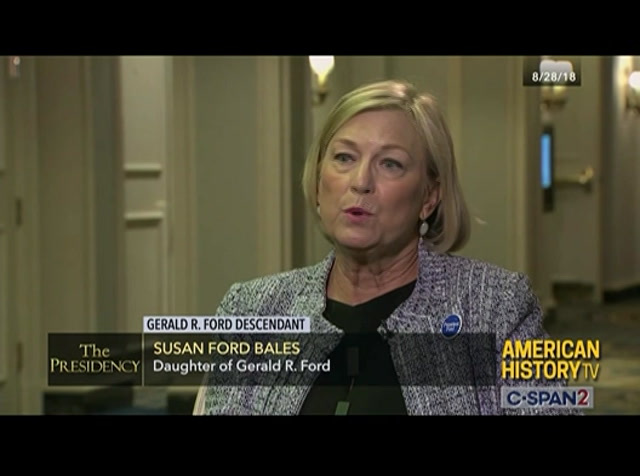 nice thing about the senate and getting to meet other people who live at the legacy of their great-grandfather a great-grandmother and they have a great time to talk and get to know each other. host: and with the biography so what do you anticipate a full force complete biography would do. >> my understanding talking to richard is there are more intimate details about my dad with the things coming out about mother in a few weeks i learned things about my parents i did not know. hoping to learn things about my father i did not know where
7:55 am 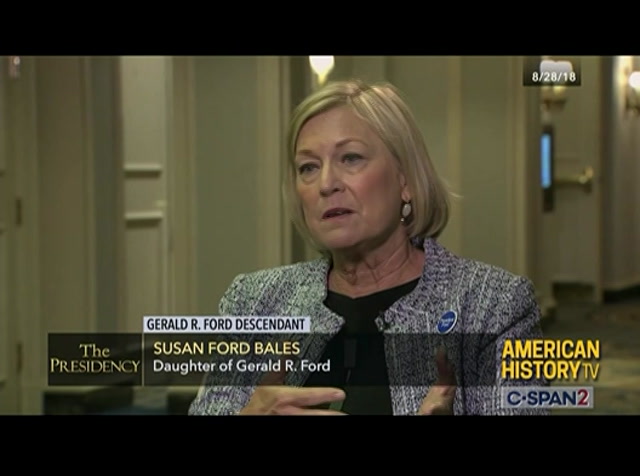 how the process happened. so my children got the benefits of title ix which my dad passed i did not care about it then but i do now because it affects my children and grandchildren. host: i said last question but the rising interest in the role of first lady's overall. and then this part of progression. so what could be learned from these women to help make political partners quick. >> they are all interesting people.
7:56 am 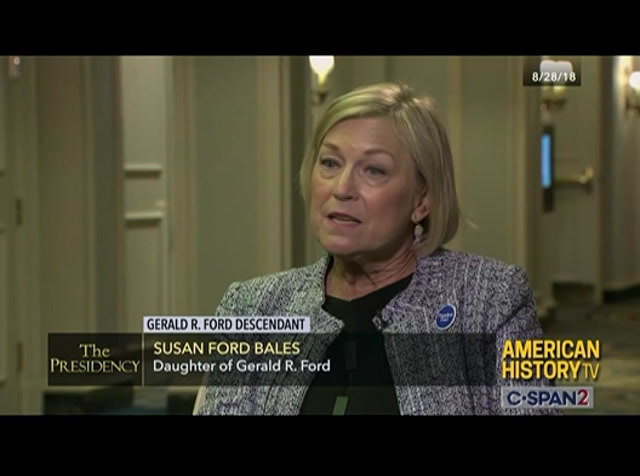 but gravitate to the story the first lady is not paid a dime for what she dancer what she is put up with. that she has to have a cause and the reason.
7:57 am 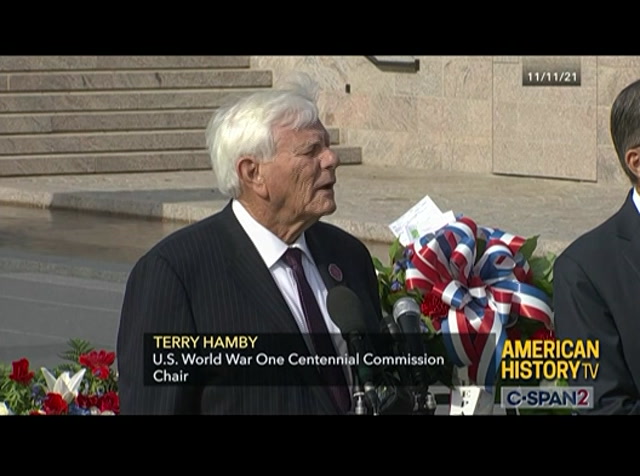 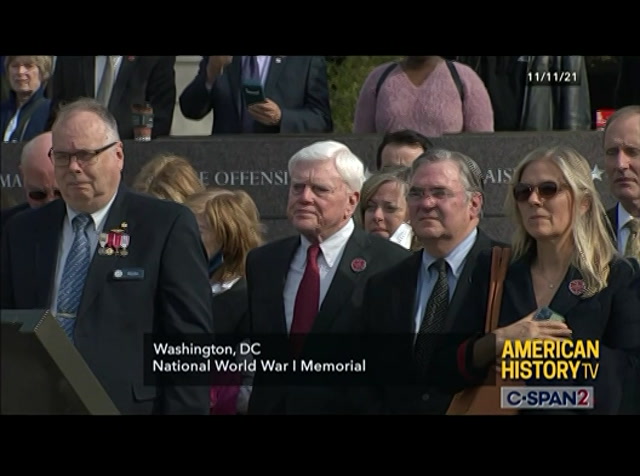 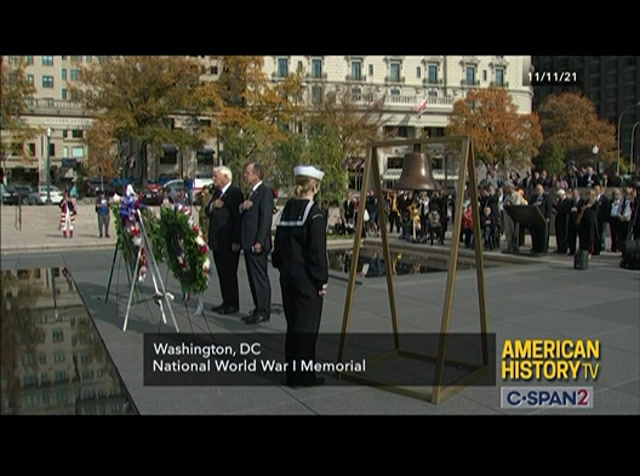 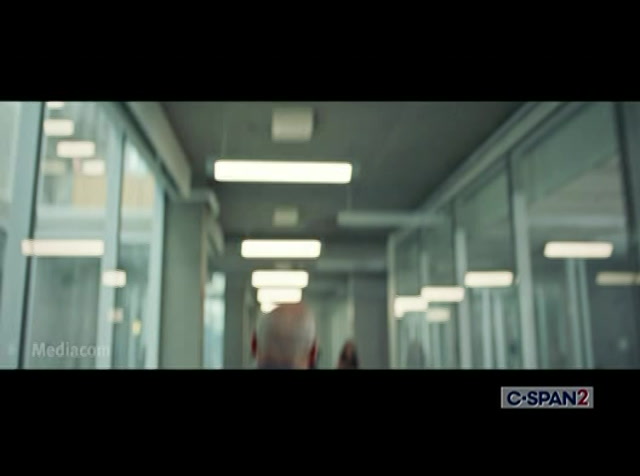