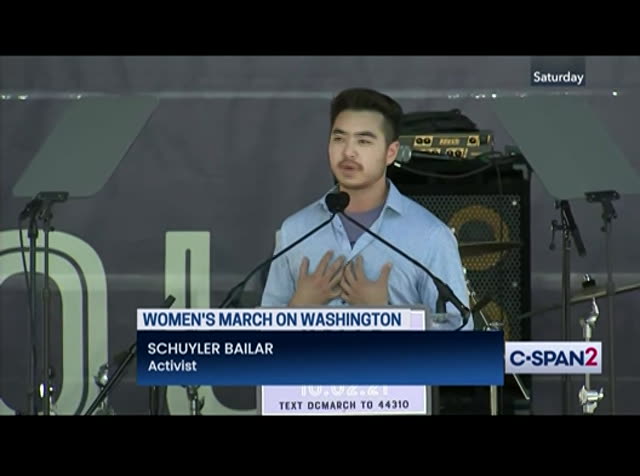 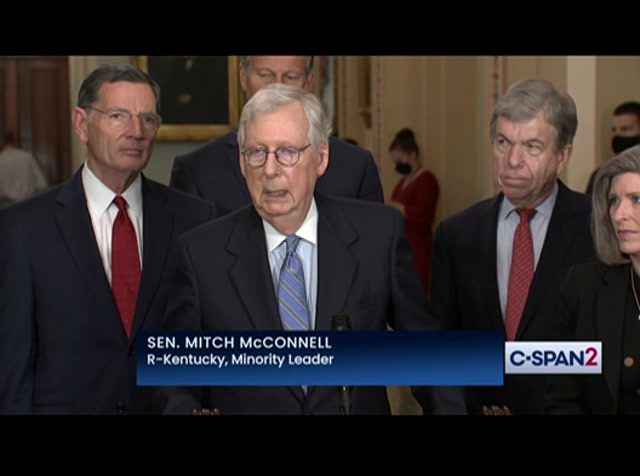 right to take gender hormones, my right ... >> you can watch the women's right march on our website c-span.org. we take you to the capital for remarks on senate leaders as they return to their weekly party lunches. >> they signed up with the progressives on the infrastructure bill. and as a result of that they obviously taken a one-month pause. which leads me to addressing the debt ceiling. we said in july and august and i said in september there's a clear path to achieve raising the debt ceiling which must happen. america must not every default. and doing it with democrats only.
1:59 pm 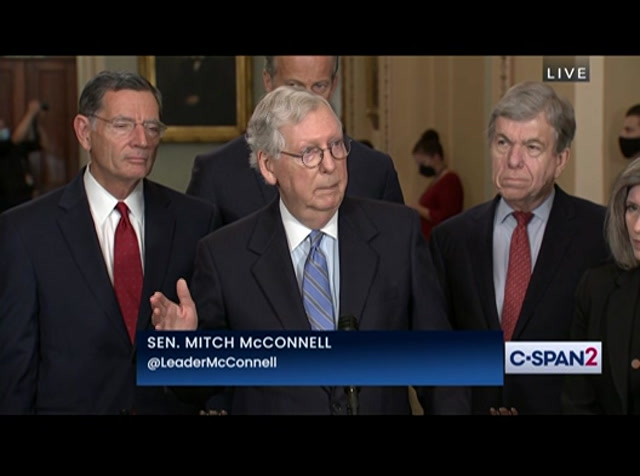 during the previous reconciliation we got a ruling from the parliamentarian who said it's possible to amend the budget resolution through 304 process. they had plenty of time to execute the debt ceiling increase and have chosen not to do it. now, they had plenty more time because clearly the pause button has been pushed on the larger reckless tax and spendingbill . i'm for them one more time not to play russian roulette withthe american economy . we've been down this path before when you do not have divided government. the party in the majority got the job done. they need to do this, they have to time to do it.
2:00 pm 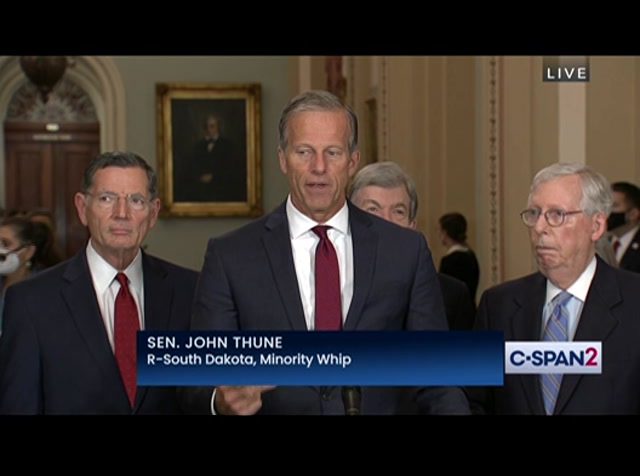 and the sooner they get about it the better. to make sure the markets and american people know that as usual, the american government will never ever default. >> is a couple quick points, one is the democrats as you all know have full control of washington. they have the house, the senate and the white house. they have a procedure to do this at 51 votes. we know it, they know it. the parliamentarian has confirmed it and they have been told repeatedly going back to july as the leader pointed out there was a letter signed by 46 republicans saying they need to use reconciliation, republicans will not be a part of their massive spending and tax spree it's been very clear clearly
2:01 pm 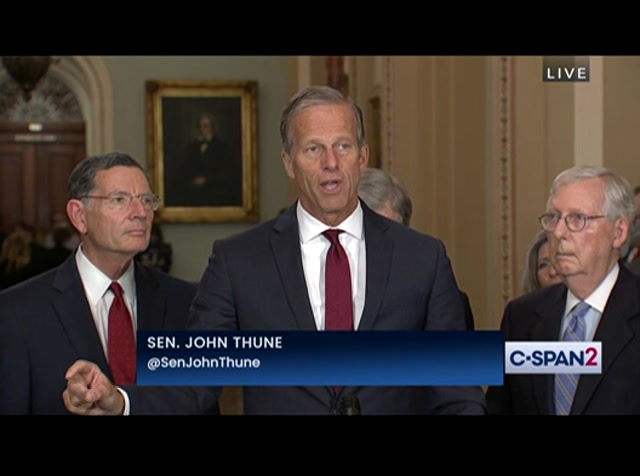 articulated. there is plenty of time in which to do this and it's important to the democrats get started doing it. the argument for their excuse for not wanting to do it very simply is that it's complicated. it takes a while, it's hard. well when you're spending 3 and a half trillion dollars the biggest expansion of government in the history of this country and raising taxes, the biggest tax increase in the history of this country and you're doing that in a partisan way through a partisan procedure with 51votes to be hard . >> .. there will be another vote tomorrow which will be clear that's the path they need to take. shifting gears for a moment, we had a. where there weren't bipartisan
2:02 pm 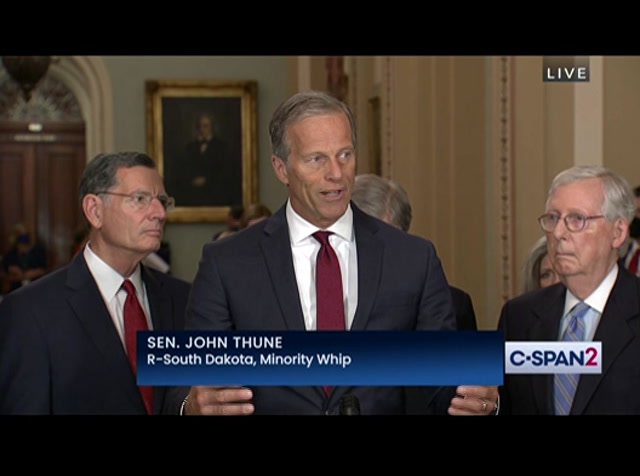 issues, one we have in front of us is what to do about big tex influence on our country and economy in our world and there was a hearing this morning in which i participated in where the facebook whistleblower testified that i thought provided compelling testimony why it's important congress take action to ensure big tech is held accountable and there's transparency about their practices. they use artificial intelligence to moderate the content the people in the country see. i think that's got to be addressed, who got up couple bills and legislation, one which modifies reform section 230 and one we call the filter bubble transparency act that ensures people in this country has a
2:03 pm 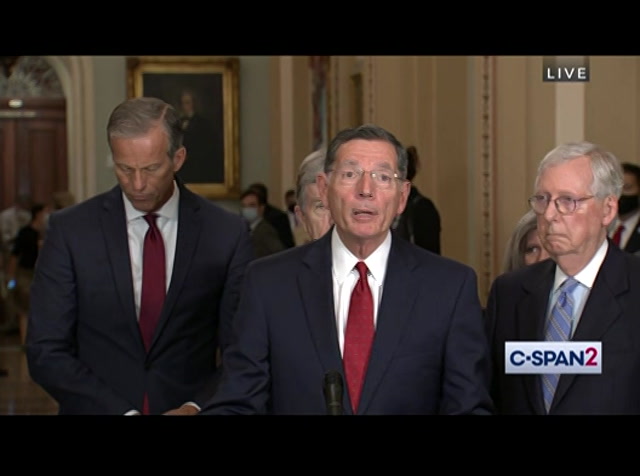 choice an option, they won't look at manipulated content but they also have an option to look at straight content to give the trays to the american people, make it there twice and their option, one way to make big tech more transparent and accountable to the american people and i do believe and hope the bipartisan support, it's time for congress to take action. >> the republican party will not allow the irs to spy on your banking account. on this single topic alone, i got more e-mails and calls in the last three weeks than any other item over the last times in the u.s. senate. as part of what the president is proposing, reckless tax and spending bill, he wants to give $80 billion of additional money
2:04 pm 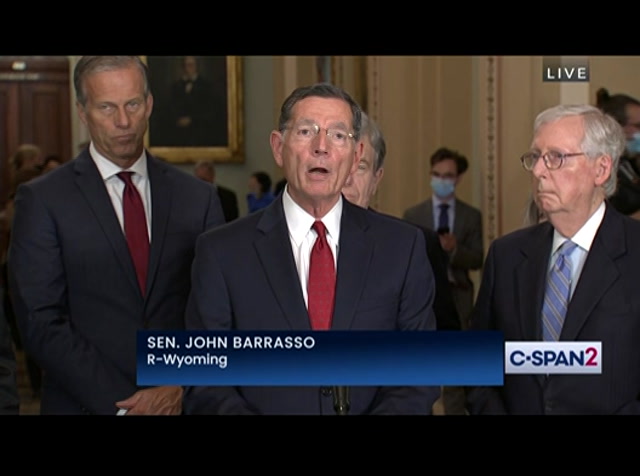 to the internal revenue service. janet yellen wants to use the money, secretary treasury to hire a whole new army of irs agent. she's said she wants the agents to have access to your personal bank account, checking accounts. she said any check you would right or any deposit you would make or anything above $600 will have to be reported to the irs. their goal is to squeeze more money out of hard-working taxpayers and they want to use that money they squeeze out of hard-working taxpayers to pay for the gift big government socialist agenda. this is an invasion of privacy of american citizens. number two, it turned bankers and credit unions into de facto irs agents and they don't want any part of it.
2:05 pm 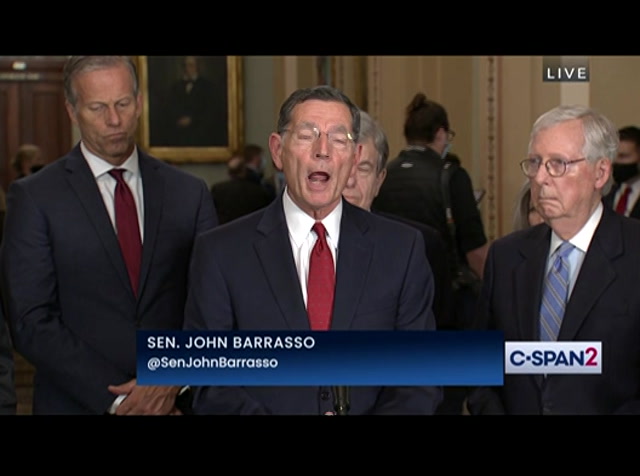 it's a topic that came up repeatedly when i was in a grocery store in wyoming past weekend. the irs is the most powerful and truly unresponsive unaccountable agency of government and they've proven they are unable to keep tax records secure. we are not going to allow joe biden and irs more power, we want to stop it in its tracks until cowboys in wyoming if they make a payment on their pickup truck or by us for the horse, they won't have an irs agent along for the ride. people at the white house the last few days have been repeatedly saying they are raising the debt limit not about the money they are spending now, it's about the money spent in the past.
2:06 pm

i'll say for the last 20 years, that's never been the case. every time we hit a debt limit of debate, it's about what's going to happen next. in 2019 when speaker pelosi said i'm not going to help raise the debt limit unless we have, spend more money in the current caps let us spend, but was about the future and early 20001 senator biden and senator schumer and senator durbin voted against raising the debt limit, it was about future spending. if there's a reason to have the debt limit, it's to talk about future spending but how do you talk about future spending one for nine months now, republicans have been told we don't need you are spending and the one thing we were allowed to be a part of, the bipartisan infrastructure bill we are not told -- and by
2:07 pm 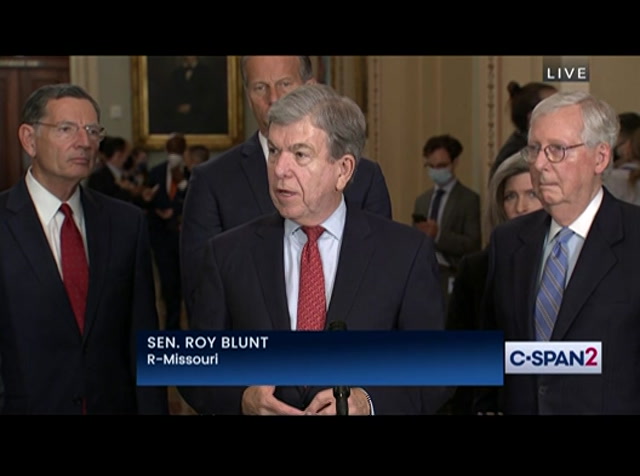 the way, that can happen unless we spend all the money we want to spend on another bill you won't be involved in. when it comes time to do something nobody ever wants to do, raise the debt limit, it's an odd time to say let's share our responsibility even though up until now, it one side of the senate during whatever they want to do without a single person from the other side of the senate. >> my head has been spinning and i'm sure many of yours have as well. crisis after crisis after crisis hitting washington d.c. and it's up to democrats own making. you can look at the sales afghanistan withdrawal which left our allies, american citizens and afghan recipients. you can look at this unbelievable crisis at our
2:08 pm 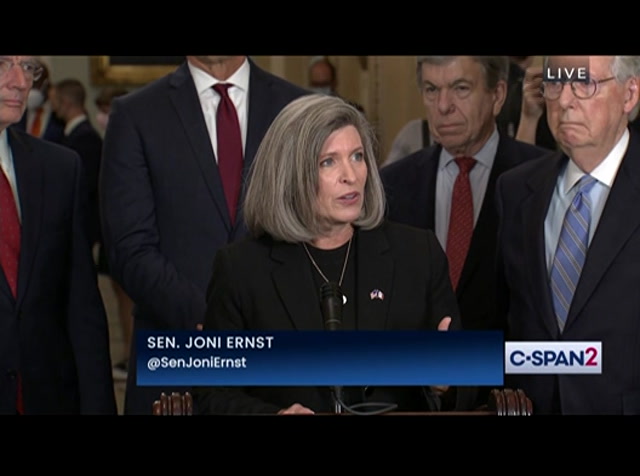 southern border which is a humanitarian disaster not only for americans but all of the migrants coming up to the southern border. you can look at the outrage and spending now pushing our nation to the debt limit. you can look at the tax increases being proposed by democrats in the house and senate. it's crisis after crisis and the folks in iowa are extremely frustrated what they see going on here in washington d.c. at the end of this last fiscal year, iowa ended up with $1.2 billion surplus under our republican governor and republican house and senate. our second quarter gdp exceeded the national average.
2:09 pm 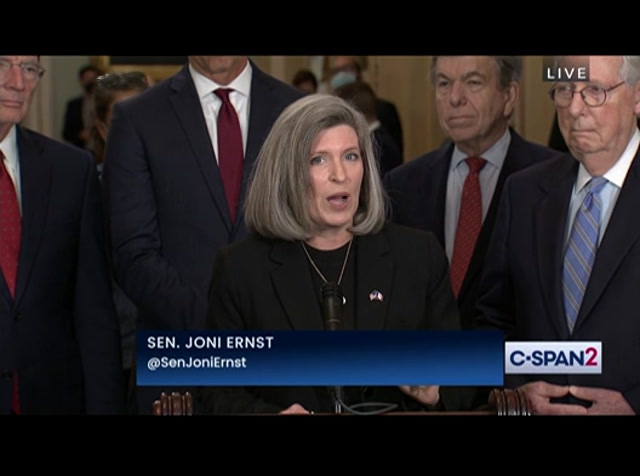 this is what true fiscal responsibility does could do for a nation if you are not operating under crises so i would encourage the democrats and president joe biden to get their house in order, work with us. iowans are frustrated and so are we. >> across florida, people are frustrated with inflation. frustrated they have to make a choice between filling up the car and put food on the table. they are concerned used car prices are up, home prices have skyrocketed. inflation is caused by reckless government spending. i had covid i got both the vaccines, both my shots but i'm hearing from businesses no, they are scared there will be a lot of employees will not come back to work because of the vaccine
2:10 pm 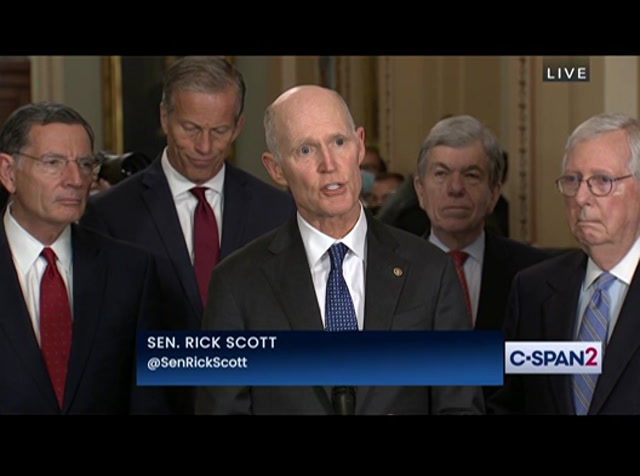 mandate and we have a supply chain problem causing prices to go up so what happens if 10% of workers decide not to show up because they don't want to get the boxing piping made expect to get? what that is going to dupe to prices so all of these things the biden administration has unintended consequences but the biggest consequences, we are seeing constant cost inflation. >> talk about the debt ceiling -- [inaudible] investors in new york and wall street, people concerned about your position -- [inaudible] >> we are all hearing about the need to do this. the only issue is, who does it? it's not in dispute, the debt
2:11 pm 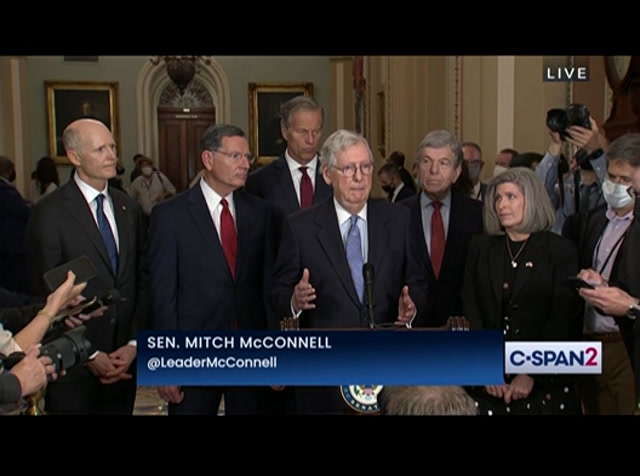 ceiling needs to be addressed. the only issue is, who doesn't? i've been over this repeatedly with you all and others since july -- >> have a called you to the banking industry? >> i'm sure we've heard from everybody and i'm sure the democrats have as well. [inaudible] >> i have not heard from but president, we had an exchange of pleasantries yesterday. >> you agree the debt ceiling needs to be raised and they are saying they are willing what possible difference doesn't make which mechanism they used to do it whether it's reconciliation or republicans not filibustering them with their 50 folks? >> they set there perfectly prepared to do the job themselves. the easiest way is through the reconciliation process and i've pointed out for two months --
2:12 pm 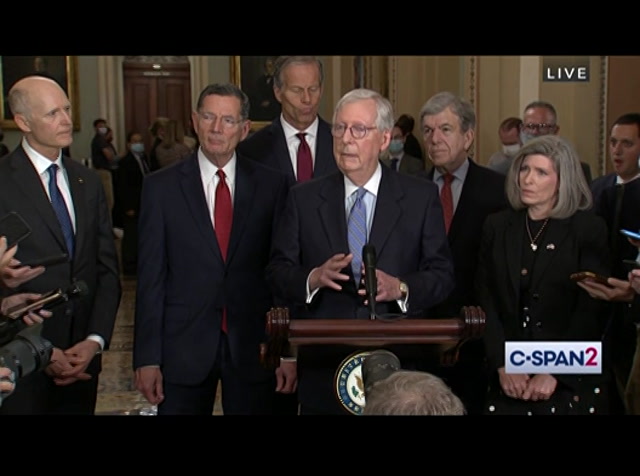 >> them passing it -- >> that would require getting consent every republican to lower the threshold of 51. i can't imagine that would happen in the reason that wouldn't happen, we been pointing out for two months how they ought to do it the way -- >> do have concerns over inflation or the federal reserve right now? >> i would have to talk about that. >> democrats to change the filibuster, they are discussing possibilities changing the filibuster. >> the debt ceiling needs to be addressed. the only question is, who should address it? you've laid out a path for two months here that's easily done, plenty of time additionally this month to do the job that i hope
2:13 pm 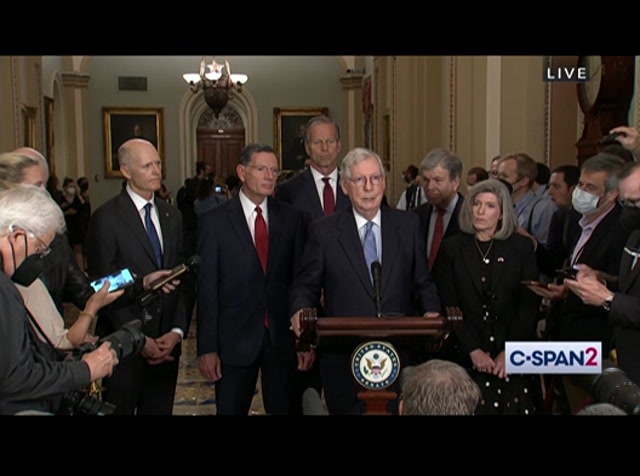 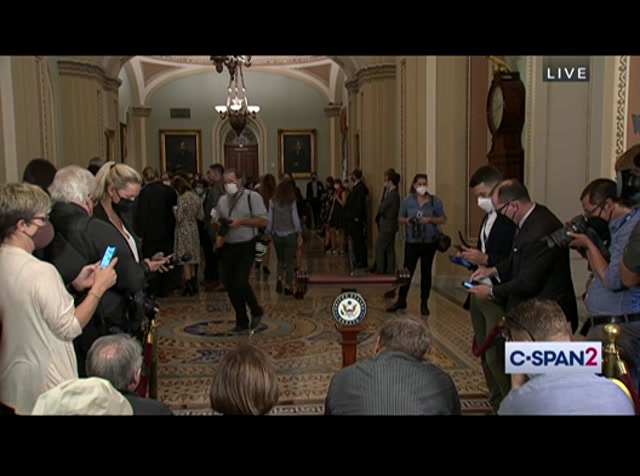 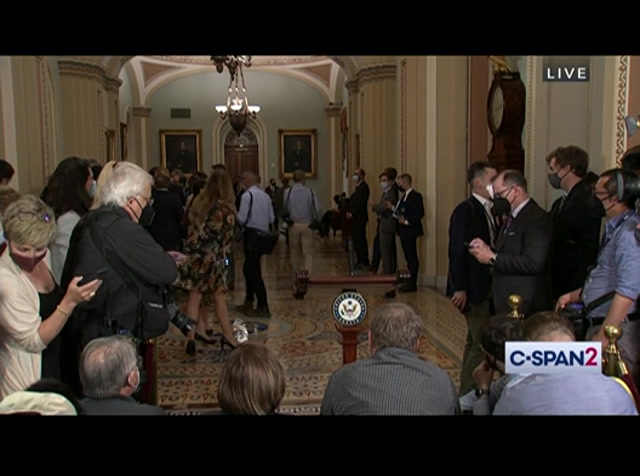 meetings making comments and reports to reporters. we typically hear from senate democrat leaders after their party meetings but the senate is about to gavel and now and they will continue their session. temperatures voting on the nominee deputy administrator of the u.s. agency for international development, sanders considering federal district court judicial nominee in washington state. senate session is about to get underway at 2:15 p.m. eastern, live coverage here on c-span2. the question is on the nomination. is there a sufficient second? there appears to be. the clerk will call the roll. vote:
left
right
Borrow Program
tv