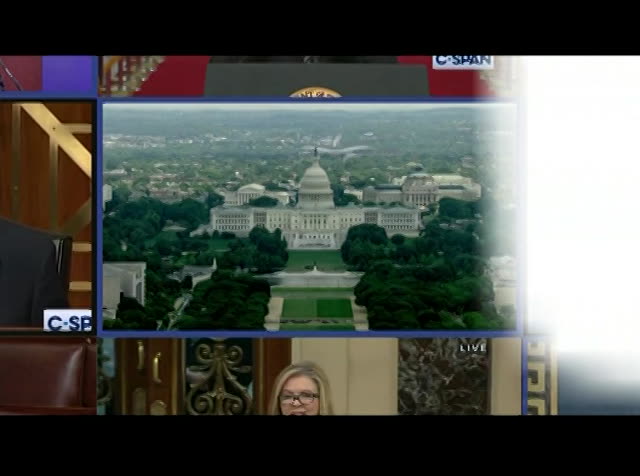 >> liveright books is celebrating its 10th anniversary. bob robert weil -- tell us about liveright books. >> first of all its great to be here. i feel like life is getting back to normal. one of the greatest publishing houses in 1917 hemingway and in 1933 norton the parent company
5:51 pm 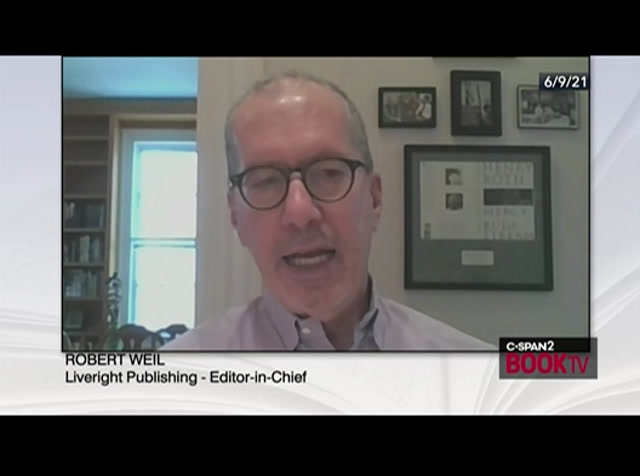 bought it in the early 1970s and the former chairman decided to relaunch it as a quality nonfiction and fiction imprint in 2011 and 10 years later its 370 hoax. >> mr. weil who are some of the authors that you published? >> you would know many of them. someone like larry mcmurtry a.g. ballard and a lot of wonderful people from many of all different sources. and nonfiction we have joe ellis on the revolution coming this fall. we won the national book award
5:52 pm 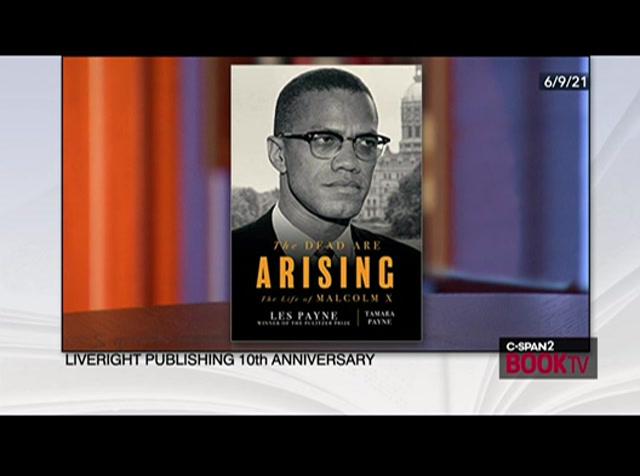 last year. with the revolution coming this fall and we won the national book award last year with malcolm x. mary beard, s.b. qr and annette gordon-reed. we just had her bestseller in juneteenth and we have another look on the front page of their times american on fire. jack davis won a pulitzer for his book called the gulf. he goes all over the gambit. >> host: other names include transportation secretary pete buttigieg, edward o. wilson the naturalist and paul mccartney. what was it like to publish mr. mccartney? >> guest: i can't answer that because i published him in 2001 but his life's work as we see it is coming in november. it's called the lyrics. i've known paul for 20 years and
5:53 pm 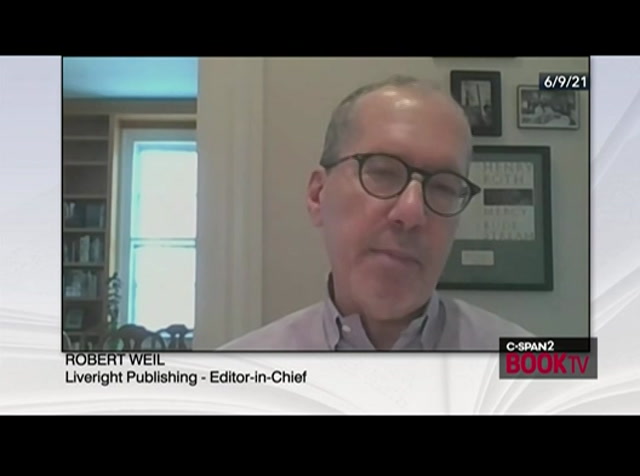 this will be in lieu of an autobiography. it's two volumes and it deals with 154 songs. he does commentary on how they came about and the stories behind them and what involved the lyrics. there are over 700 images and over half we have never seen before. we think it will be one of the biggest books of all and paul has done so much collaboration. paul is a sweet and wonderful man but he likes to be creative and he likes to be energetic. he does not lay back as a typical celebrity. >> you were quoted a couple of years ago as saying quote being an editor is like being in show business. what does that mean? >> guest: yes and no. being in show business you never know how a book will do. you can spend 10 years on the book and it could be a tremendous book and that may
5:54 pm 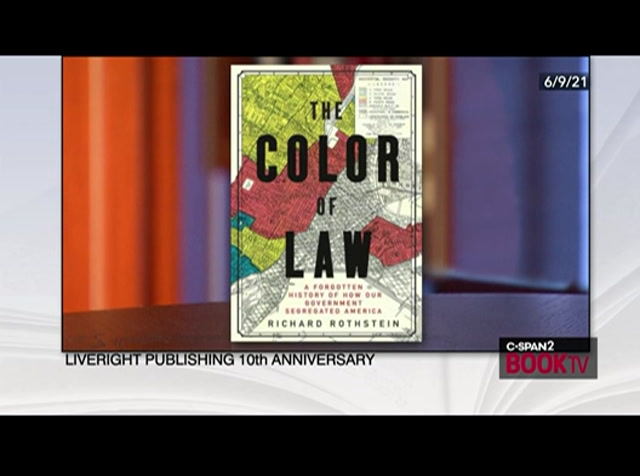 bomb in the first week and there is no audience. we did a book four years ago with richard ruskin we went out with 7500 copies were years ago and the book has sold over half a million copies. that's like show business. you just cannot predict what will ever happen to a book. >> host: how long have you've been in the book business? >> guest: i'm very proud to reveal my tenure. i begin in not so brief 1978 so this will be 43 years. i feel i've been blessed to have such it great career. i feel like i've been given a baton and i have to give something back for everything that i've been given. i have to work to improve our culture and improve our society and make you both feel the joy of reading and in the process do
5:55 pm 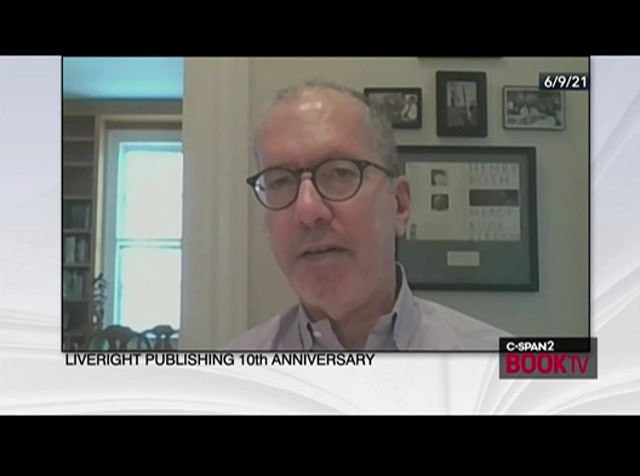 some good books. >> host: robert weil during the pandemic we have noticed book sales have been steady and in fact have increased. >> guest: sometimes i've dealt survivors guilt because so many people have had such terrible times including many of my colleagues. yet the book business at least on our and at liveright has been strong. we have had to adapt in huge ways and so many more books have gone digital. the george floyd murder we have been doing books about civil rights and inequality. i've been doing them for 30 years and suddenly there was somehow a lot of people who
5:56 pm 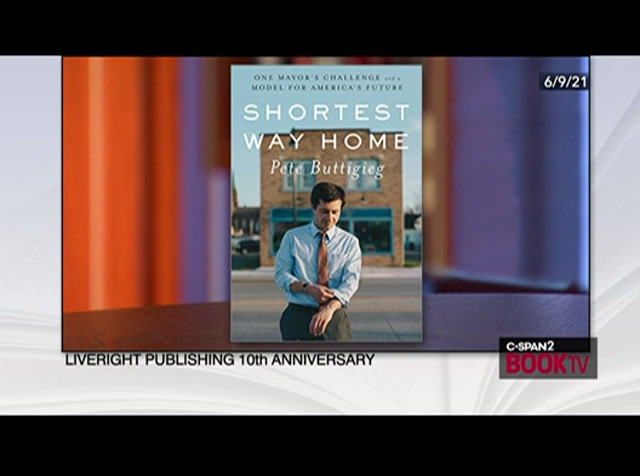 perked up and it's like show business. we published the buttigieg in 2016. who would have known. >> host: how do you connect in such a saturated market especially when it comes to social media and on line, the availability of everything on line? >> guest: you have to i feel, distinguish a book from a tweet. i know that sounds obvious but i always tell my colleagues and the writers i work with imagined your book is going to be around in 20 years. your book will not just disappear and it's not something that is instance so we at tinisch like books that matter books that last and we work with the writers on finding things
5:57 pm 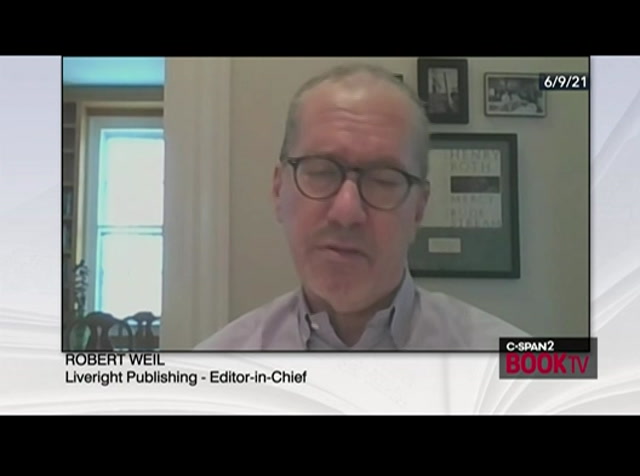 that are of interest so we like to distinguish ourselves from social media although we have people on social media who are there to help us. >> host: robert weil why is it important to have a imprint like liveright? webpages publish your own work lacks >> guest: i can't really answer that because i didn't start it. her current chairman julia reid had felt that they needed to expand what norton was doing and they felt we could get more recognition with two lines rather than just one and joy started in the last two years and it's such an aide gold working under norton but to separate the books into different areas of critics readers and everyone focused in
5:58 pm 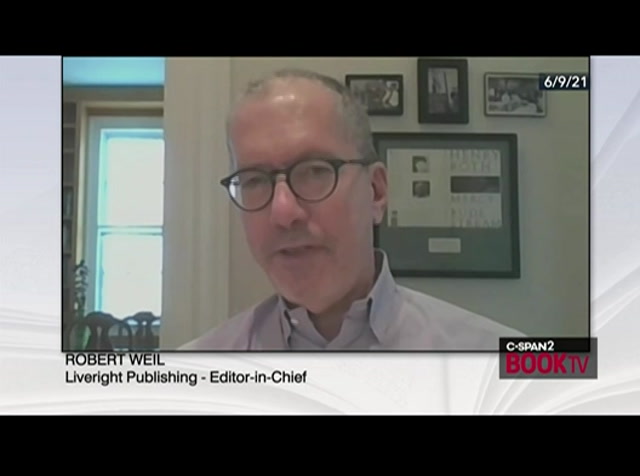 on the books. >> host: 370 looks in the past 10 years. that's about 37 near. is that a pretty heavy lift? >> guest: my shoulders feel as if they are sagging to be honest. it's been a lot of books. we have a high productivity rate. unfortunately we have to turn down so many books and i have wonderful colleagues. i have wonderful editors. we all aspire to the same goals. we are a family i think i have 12 assistants who run good parts of american publishing and so we have all done this together so it's me but it's also a lot of other editors. >> host: i know you follow publishing news mr. weil. what weil. what do you think about some of the books that have been
5:59 pm 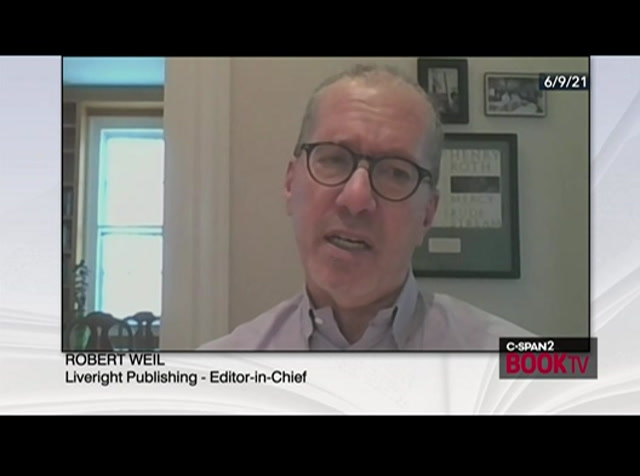 canceled or dropped by publisher's? >> guest: i honestly have not been involved. i have not been involved in a book that has been dropped and what i have learned i have learned at the same time you have as often in the new york times. i'm not the best person to question why a book has been dropped and why it has not been dropped. i do think everyone will agree we are at a very tough point in our culture. it is partly social media. you have to be so much more careful and sensitive to the needs of everyone than you have ever been before and it makes it that much more difficult. you have to edit a book and be completely aware of it. >> host: the e-books have
6:00 pm 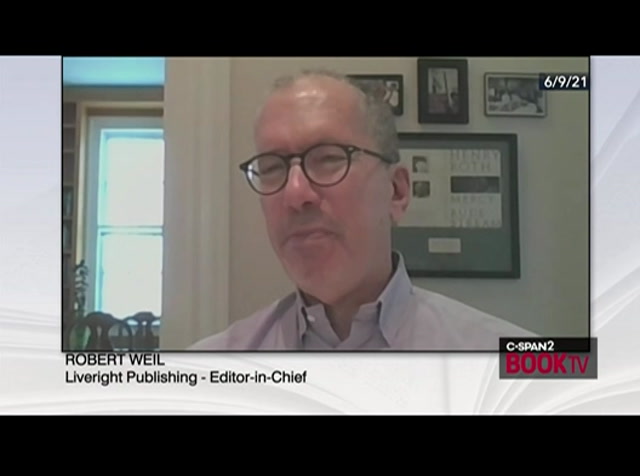 rather plateaued, haven't they as a percentage? about 25% of all book sales? >> yes and probably a bit fewer for us because people want books of permanence and they don't want to buy an e-book. a book that just came out annette gordon-reed's on juneteenth about culture or upbringing. people want to own the book and that has delighted us on how well it's doing. we publish books of another one besides newbury -- may rank as we did mary. women empowered five years ago, before everything. we really work to make books that people want to hold in their hands. whenever book is a bestseller it
6:01 pm 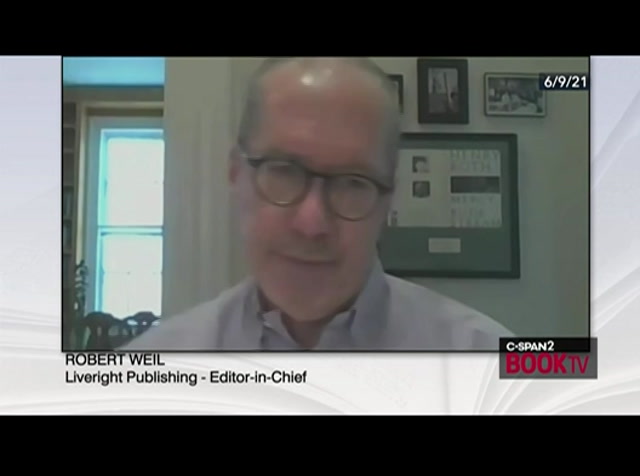 does very well but a lot of other hooks do not perform as well. our national book award last year again it was not a huge book. >> host: robert weil i know you are outside of the city right now. what's it like to be an editor-in-chief during the pandemic? >> it has been very difficult because there is no separation between going home and doing something on the side and i found honestly that i am working 12, 14 hours a day and i love line editing but somehow it has just piled up. i have right now for your four manuscripts that are waiting for me that i feel guilty about. in the pandemic there are certain things you just can't delegate. when you are working in a remote
6:02 pm 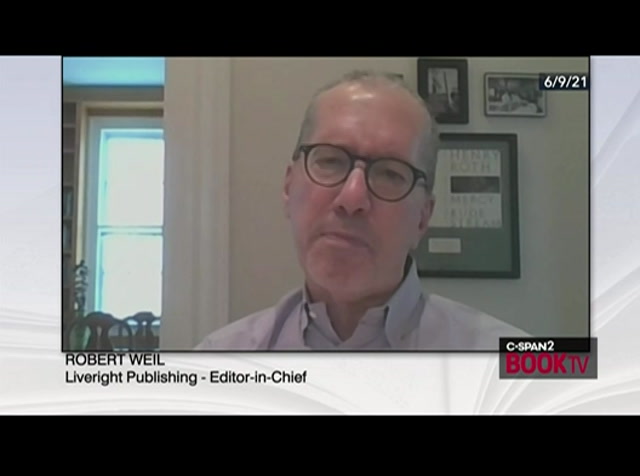 environment it can be very tough. i feel blessed because my health has been very good but so many people have not and i have felt a lot of pressure. at first it was like the world was collapsing. i felt that pressure better books have to do well and contribute to the common good of norton and the larger world. >> host: do you ever get a chance to read for pleasure and if so, what are you reading? >> guest: i read rarely for pleasure. i read newspapers and magazines for pleasure. what i do for pleasure to be honest is i escape and i watch movies every night. i've feel like i've been in become an authority in the 1940s and 1950s and i even got into understanding american
6:03 pm 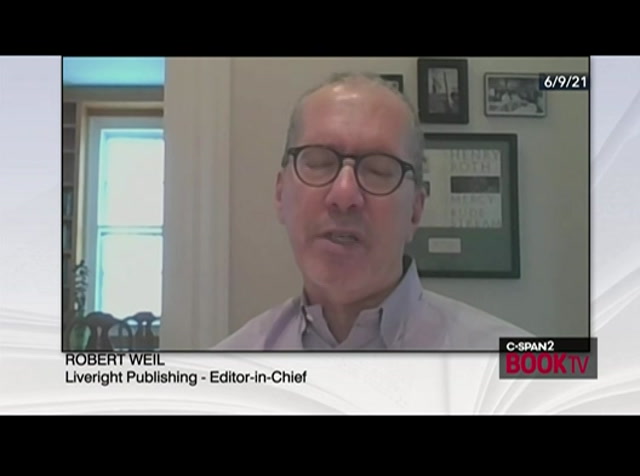 westerns and created a consciousness so i take certain actors or actresses and i will watch eight or 10 movies. lately i've been on nashville and i got an idea from it and i gave it to one of my authors amanda fortini who's writing a book about las vegas and how she can incorporate some of the themes. >> host: when you pick up a manuscript do you know within 10 or 15 pages whether or not it's going to work? >> guest: do you mean a submission like when it's submitted to me? >> host: yes. >> guest: there are a whole bunch of variables that come into play. who the authors and does the author have a background and in is it something you'd be interested in? you would a ridiculous to say -- it doesn't fall into my area and i think after all these years i may be able to sniff out if they
6:04 pm 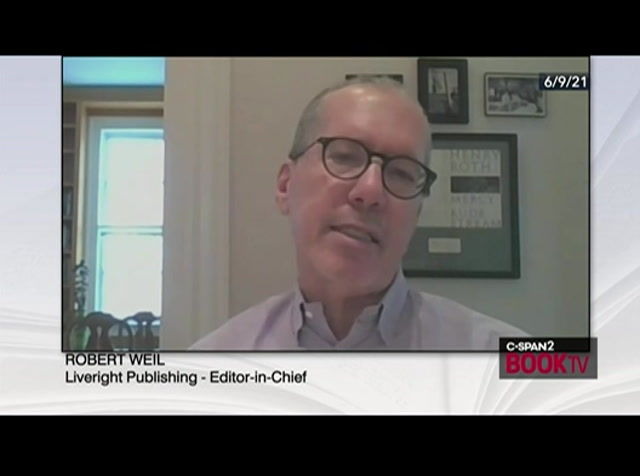 are writing is really good. if someone is a great writer i don't care if they have never published before i just signed up 33-year-old no one has heard of. it's all those combinations but yes you really can tell very quickly. we have 30 submissions a week you can't read everything. you can look in your always polite because people have feelings. >> host: robert weil publishing director of liveright books. congratulations on your 10th anniversary and thanks for joining us on booktv. >> guest: peter, thank you so much. good to hear from you.
6:05 pm 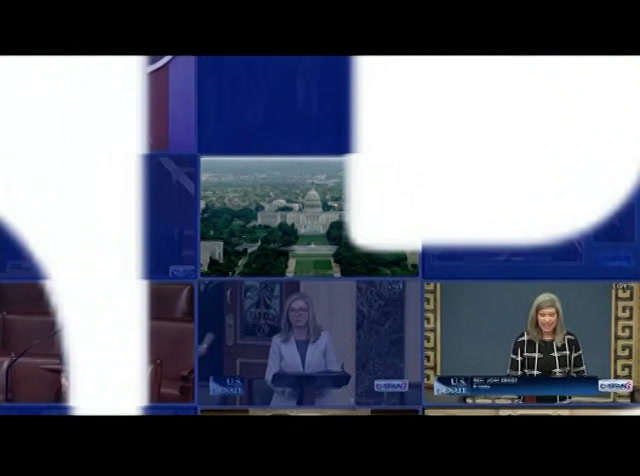 tonight we are thrilled to welcome daisy hernandez amy stuart. daisy hernandez is a former reporter for their times and has been writing about class and sexuality for two decades. the most recent book was she joins us for this evening is "the kissing bug" a true story of a family , an insect and a nation's neglect of a deadly disease. she has written for "national geographic" and npr all things considered and code switch the atlantic, slade and eureka and cheese the author of the award-winning
left
right
Borrow Program
tv

Bob Weil, editor-in-chief of Liveright Books, talked about the 10th anniversary of the book publisher.