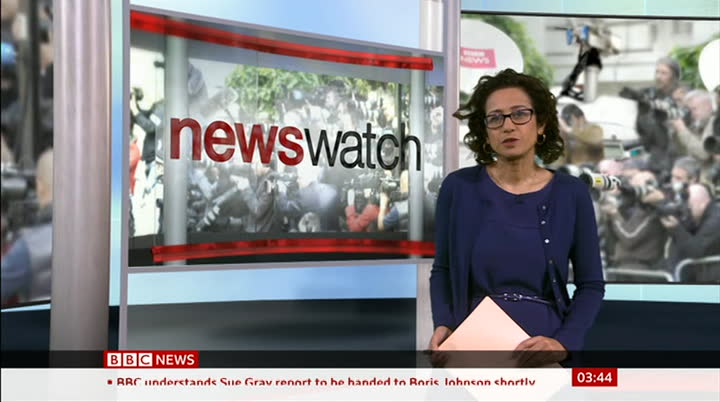 people want to ask questions about that. i think you've got to wait for that to come out but what i will say, this government is focused on the stuff that i think people want us to focus on. magda walter was watching that and immediately got in touch with us to say... there were also strong feelings on the opposite side of the political divide following headlines like this on the news at ten. tonight at ten, downing street admits that staff gathered inside during the first lockdown to wish borisjohnson a happy birthday. in the cabinet room at number 10, it's claimed up to 30 people were present at a time when indoor gatherings of more than two people were banned. # happy birthday to you.# an s williams e—mailed.
3:46 am 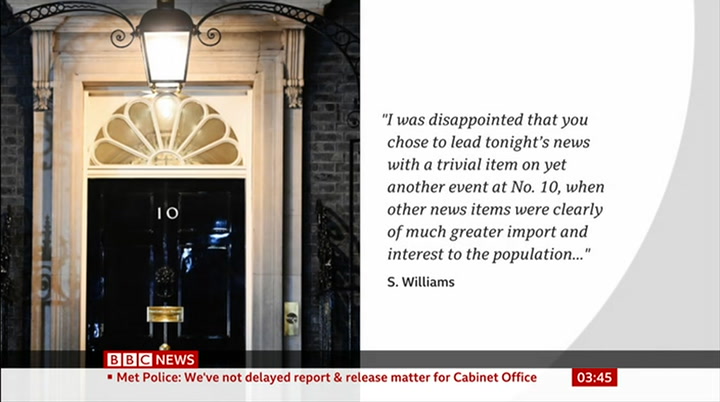 an anonymous caller to our phone line on wednesday was clear in her views. i am absolutely disgusted with the bbc news. all that could be happening with russia and ukraine and what do you put first in the headlines? all about boris johnson. parties, parties, parties, i'm sick of it. all the while, plenty of airtime was being spent just waiting for you know what. well, we're still not sure when we're going to see the famous report by
3:47 am 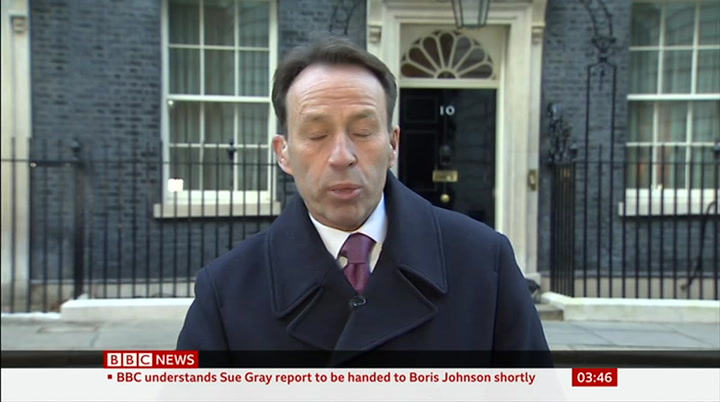 sue gray because it hasn't actually, we understand, been handed in to number 10 downing street. once it is, it is going to take a bit of time for the prime minister to absorb undigested and his officials, and for it then to be released, so whether we're going to get it this afternoon or tonight or maybe tomorrow, we're still not sure. perhaps our political correspondent nick eardley, who's at westminster, can shed a bit of light on that. although, i'm afraid i doubt it. but, nick. i wish i could, ben, i wish i could tell you the time it's coming, but we just don't know at the moment. well, we still hope to speak to someone from the bbc�*s political unit to get answers to some of those questions.
3:48 am 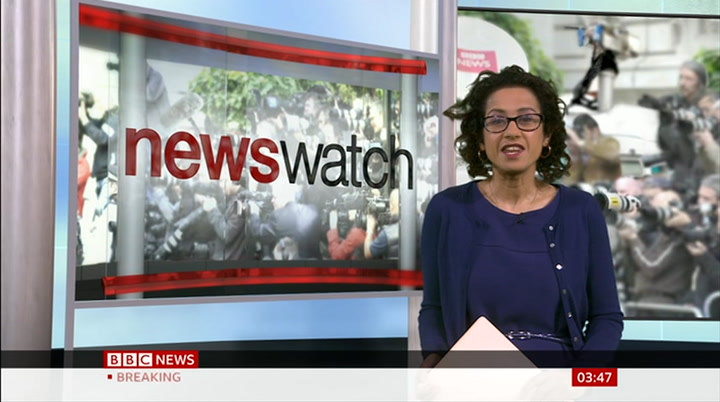 safe to say, the gray report will still be on the agenda next week. now, for some weeks, there have been vociferous complaints about how the bbc reported an alleged anti—semitic incident in london at the end of november. the bbc news website carried an article on the subject and it also featured on bbc london's early evening news bulletin. what we know that this incident is that it took place on monday evening. round about 30 to a0 jewish teenagers were on a bus that had been hired to take them into the centre of town to celebrate the festival of hanukkah, and then this happened. music plays. muffled voices. whoa, whoa! and the footage shows the mob spitting, hurling abuse, and even appearing to perform nazi salutes.
3:49 am 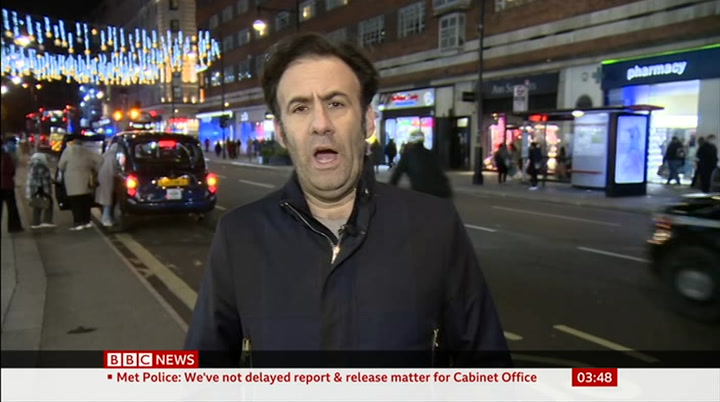 well, the metropolitan police are treating this as an alleged hate crime. i should say, though, that we at bbc london did watch this footage and you can hear some racial slurs about muslim people, which does come from the bus. it's not clear at the moment, for the person that said that, what role that may have played in this incident. that mention of an anti—muslim slur infuriated some members of the situation community, with marie van der zyl from the board of deputies of britishjews writing to the bbc�*s director general and chairman in these terms. the matter was referred to the bbc�*s executive
3:50 am 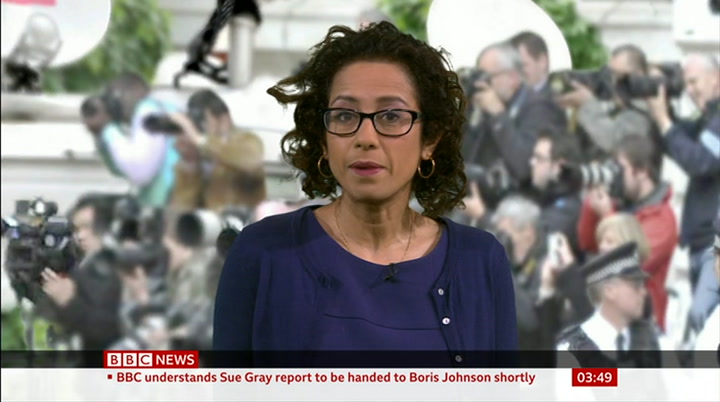 complaints unit, which on wednesday announced it had partially upheld the complaint, finding that report should have recognised there was genuine doubt over whether a racist slur was heard from the bus. the bbc issued this statement. the matter is now being investigated by the regulator 0fcom but so far many of those who raised the complaints are far from satisfied. the campaign against
3:51 am 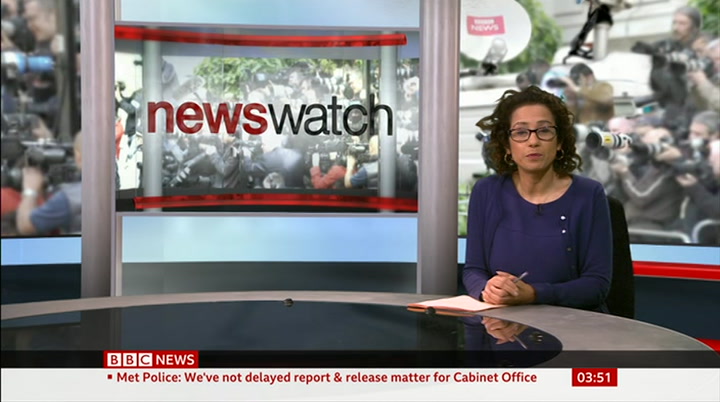 anti—semitism had this reaction. do let us know your thoughts on any of the subjects we're covering in this programme. and stay watching for details of how to contact us. and if one week you miss us for any reason, remember that newswatch is shown on the news channel on friday nights at 8:45pm and for night owls 3:45am, as well as on bbc one on saturdays at 7:45am, as part of breakfast. we are also on the iplayer. now, bbc one�*s weekly debate programme question time aims to provide a spectrum
3:52 am

of opinions, both on its panel and in the audience. sometimes the result is a robust, even rowdy exchange of views, which some viewers have told us they think can provide more heat than light. so, it raised some eyebrows last week when the programme's presenter fiona bruce tweeted this invitation to share their views to those who've declined the covid vaccine. mr apple posted this comment. we issued an invitation of our own to those in charge of question time to come and discuss this. they declined and gave us this statement.
3:53 am 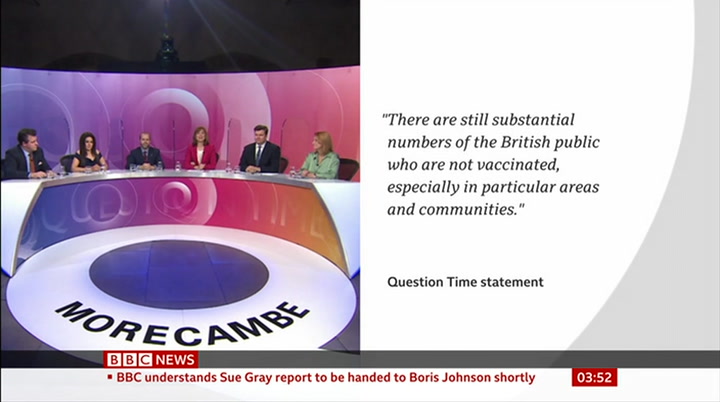 finally, two music stories from the end of last week, which elicited similar complaints. first, there was the news that the singer adele was postponing her residency at las vegas 2a hours before the opening night. half my crew, half my team are down with covid, they still are. and it has been impossible to finish the show. and i can't give you what i have right now. and i'm gutted. mary o'brien wondered, why did bbc news think that reporting on adele cancelling shows in america is
3:54 am 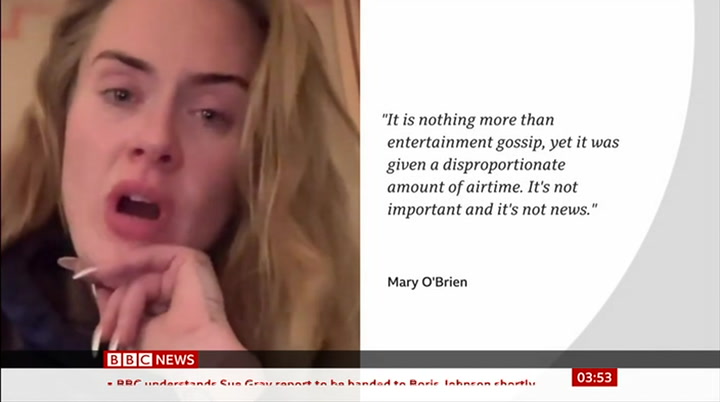 an important topic? on the same day, the death was announced at another singer, meatloaf. the us rockstar meat loaf has died at the age of 7a. he sold more than 100 million albums in a career that spanned six decades. bat out of hell, which was released in 1977, remains one of the bestselling albums of all time. here is keith gibson with a familiar refrain. thank you for all your comments this week. if you want to share your opinions about what you see, read, or here on bbc news, on tv, radio, or on social media...
3:55 am 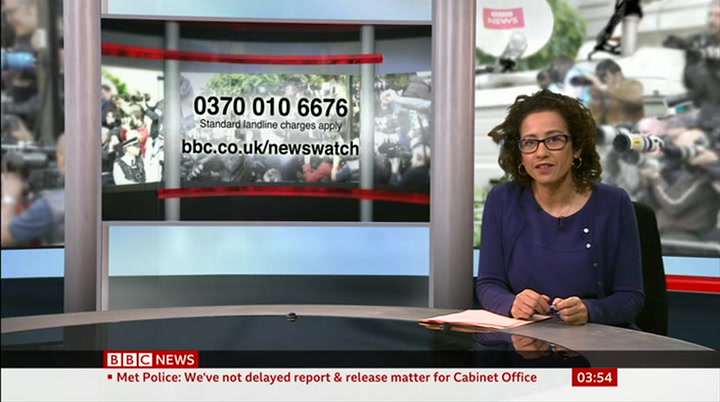 that's all from us, we'll be back to hear your thoughts about bbc news coverage again next week. goodbye. hello there. so far this month, it's been pretty quiet with high pressure dominating the scene. we've had light winds for most, but that's certainly not the case this weekend. northern parts of the country will be impacted by some severe gales at times which could cause some disruption. and we'll see another spell of wet and windy weather during sunday night. higher pressure further south, which means the winds will be lighter, but this deepening area of low pressure�*s been named by the danish met service as storm malik, and you can see why.
3:56 am 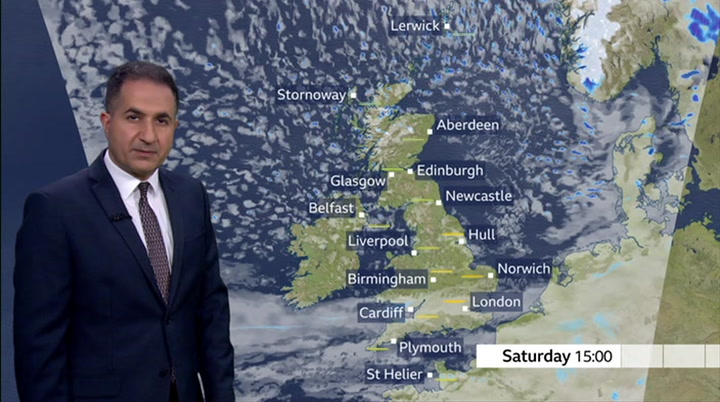 plenty of isobars across the north of the uk as this system continues to push down in towards the norwegian sea. widespread yellow wind warnings across the north of the country, gusts of 70—80 mph likely across parts of scotland. an amber warning issued for parts of eastern scotland, could see some impacts from aberdeen down towards edinburgh. got a weather front sinking southwards through the day. that will bring some cloud to southern england, where it will stay quite mild, but behind it, skies brighten, sunshine and blustery showers but it will be turning colder. it will be very windy for a time across the north and east of the country saturday night, but very quickly a ridge of high pressure builds in. winds will turn lighter, most of the showers will ease down, so under those clear skies with lightening winds, then temperatures will fall. a touch of frost out of town under those clear skies. so, our ridge of high pressure will bring us a fine, settled start for much of sunday, but we'll see the next area of low pressure hurtling into the north west of the country. that's going to bring another round of rain, gales and mountain snow. so, it will start chilly
3:57 am 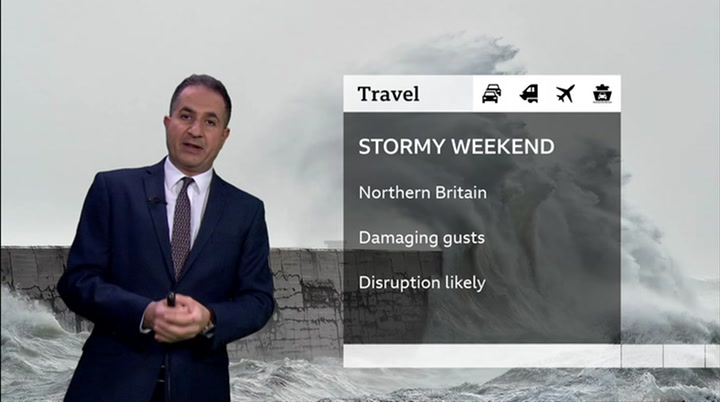 with some frost, but plenty of sunshine for much of england and wales. a bit more cloud for scotland and northern ireland. later in the day, it will start to get wetter and windier across the north west. some mountain snow for scotland and gales developing once again, particularly across the west of scotland and then pushing into northern ireland, the rest of scotland, then northern england later in the day. those winds always little bit lighter further south, but it will be a chillier day compared to saturday, with temperatures of 4—9 degrees. and then that area of low pressure moves across the north of scotland. so, two storms this weekend for the north of britain, which could bring some damaging gusts. we're likely to see some disruption in places, so stay tuned to the forecast. see you later.
3:58 am 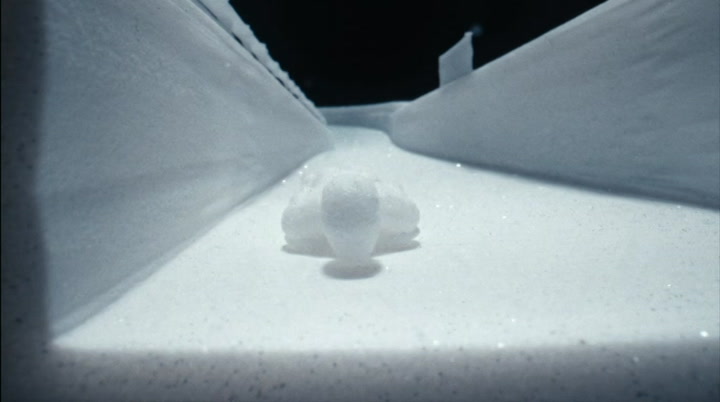 this is bbc news. i'm simon pusey. our top stories: the us warns the russian troop build—up near ukraine is the largest since the cold war as attempts to find a diplomatic solution continue. after days of confusion the downing street lockdown parties report is now expected to be delivered without waiting for the police inquiry. tens of thousands displaced and over 80 killed as tropical storm ana sweeps across countries in south—eastern africa. more doubts emerge about novak djokovic�*s covid status during his attempt to enter australia for the tennis open. and the influential online streaming platform, twitch, accused of encouraging unhealthy behaviour.
left
right
Borrow Program
tv

Were the hours and days on air looking forward to Sue Gray's report being published time well spent for journalists?