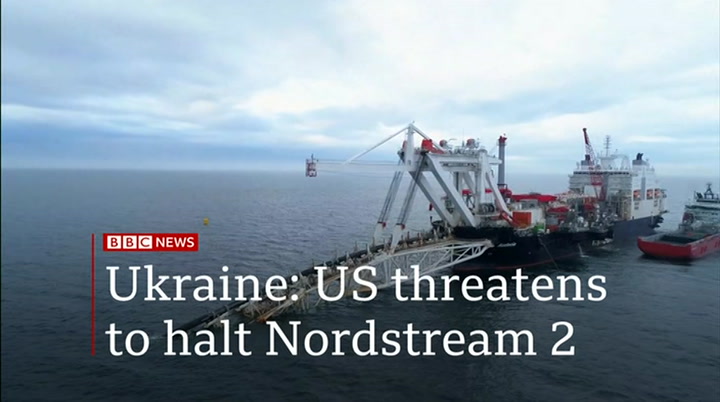 this is bbc news with the latest business headlines for viewers in the uk and around the world. big tech back on top? chip shortages and omicron fail to take a bite out of apple — as it posts all—time record sales turning up the gas. we will halt the nordstream two pipeline project if you invade ukraine — the us warns russia. bored at the border. the reality of �*frictionless�* trade with the eu — as truckers struggle with post—brexit paperwork. plus — skating on thin ice — why global sponsors are finding the winter olympics a slippery proposition.
5:31 am 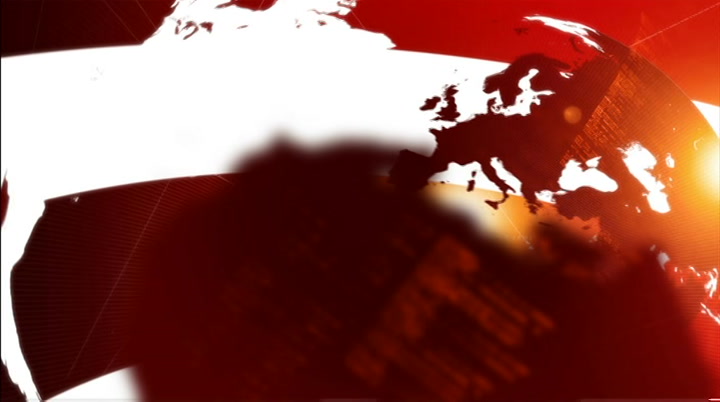 we start in the us — where apple has stunned wall street with its biggest quarterly sales figure of all time. the tech giant made revenues of almost $124 billion in the last three months of 2021, buoyed by soaring sales of iphones during the holiday season. all that despite a global shortage of chips and concern about the omicron variant hitting consumer confidence. it was way more than investors were expecting — and will calm some nerves after the recent steep sell—off in technology shares. let's talk to dan ives from wedbush securities in new york. it has been a turbulent time,
5:32 am 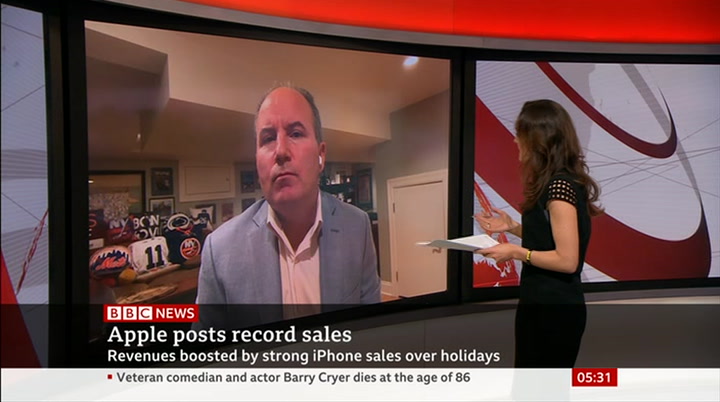 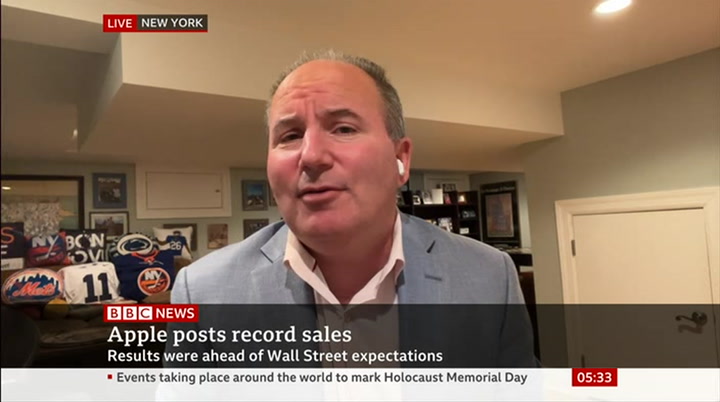 repeat buying all the time? that is a great question but if you look at iphone 13, right now they just had you look at iphone 13, right now theyjust had the strongest holiday quarter ever at apple in terms of iphone and that is despite the chip shortage which took about 10 million iphones out of the quarter. when you look at pent—up demand it speaks to the iconic unparalleled effect that apple has. but it is notjust about the phone it is about services and the ecosystem. the business alone is worth 1.5 trillion and there is a reticence of growth happening through cupertino. let's talk about what is going on with the supply chain and, particularly, the scramble for semiconductor is which are in the chips that power phones. it is turning out to be the big industrial struggle of our era, isn't it? i wanted to bring in
5:34 am 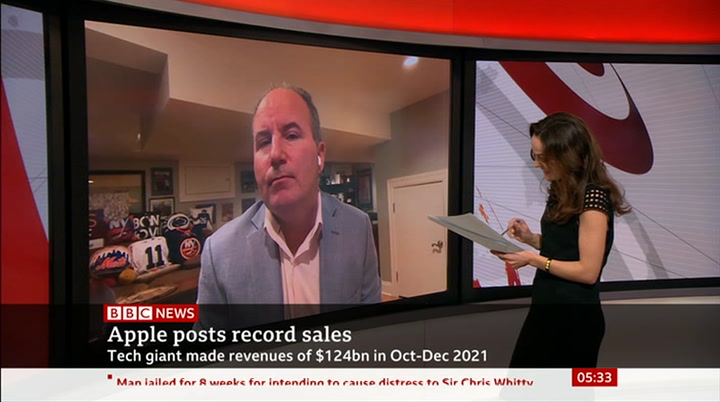 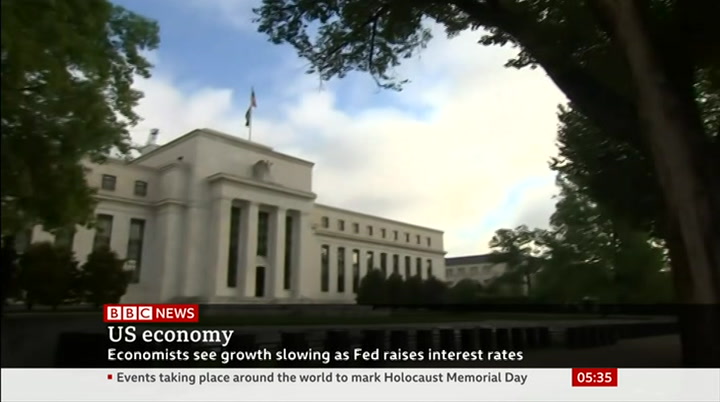 that the fed will hike borrowing costs up to four times this year and that will likely lead to blockbuster gdp numbers just seen may not continue if it becomes more expensive for individuals and businesses to borrow money. and other risks to america's economic growth is soaring inflation which is at its highest level in decades and then, of course, there is the ever mutating virus to content with and what impact that may have on the country's economic trajectory. the prospect of a rapid rise in interest rates this year has of course been rattling markets. will these figures ease those fears? let's talk to janet mui — investment director at brewin dolphin here in london. thank you forjoining me and it is good to see you. i see that the dollar is at its highest level since, well, for quite some time. these early estimates for the us enough to
5:37 am 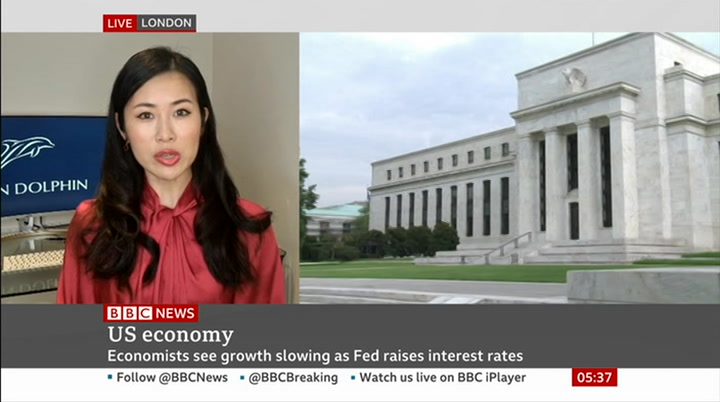 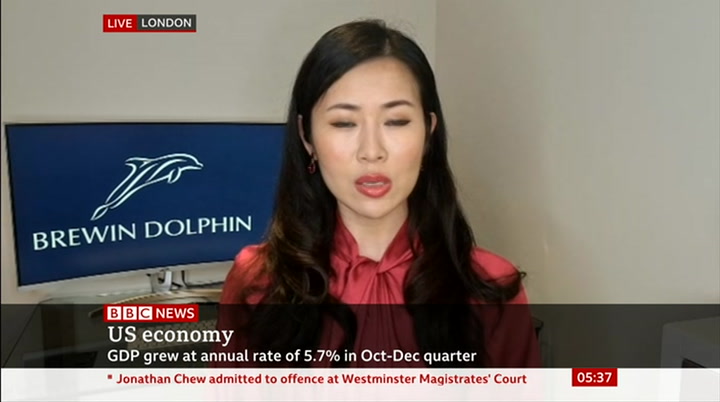 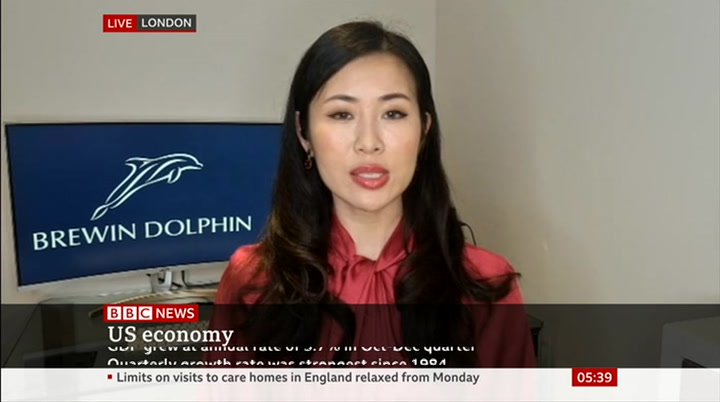 don't think at the moment. there has already been sanctions for russia since 2014 so i think the russian community are already used to sanctions and they are financially less exposed to the outside world. they are external borrowers and that has come down since then. so this time around although they will be economically hurting it will be economically hurting it will be a bit less painful than when sanctions were first introduced. i think the general economic concern, the biggest concern was certainly the even higher energy prices. i think thatis higher energy prices. i think that is the biggest risk out there because we have already seen the national prices surging and that directly affects households in europe and in the uk as well. one
5:40 am

third of energy sources are from russia in europe so i think that is the biggest risk out there. and of course political tension escalating and the incoming nordstream two pipeline will be delayed indefinitely for now, i think, so that would just add two more inflationary risk which will potentially pump more price policy action from central banks. ., ~ ,, policy action from central banks. ., ~' ,, , policy action from central banks. ., ~ , . let's dive a little deeper into the situation in ukraine. because the us has warned russia that if it invades its neighbour — the nordstream two project will not go ahead. nordstream 2 is a second pipeline under the baltic sea — bringing russian gas direct to germany, bypassing ukraine. the $11 billion pipeline would double the flow of russian gas into european markets. construction has finished but it has yet to win approval to start pumping. supporters say the supplies are badly needed — critics say it will further increase european reliance on russian energy.
5:41 am 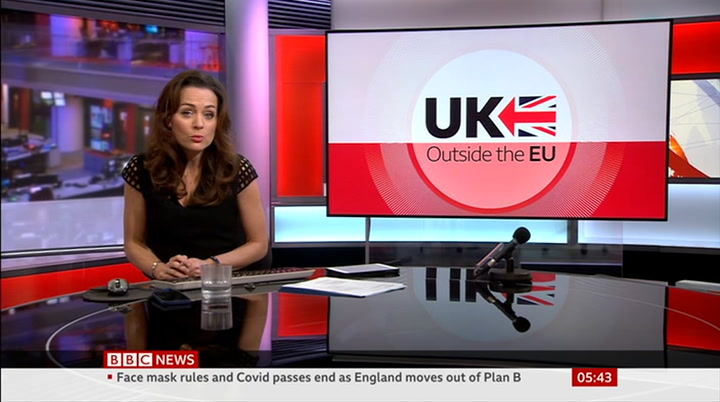 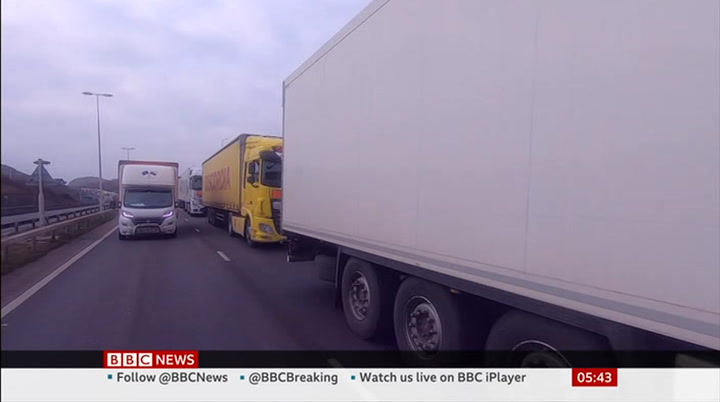 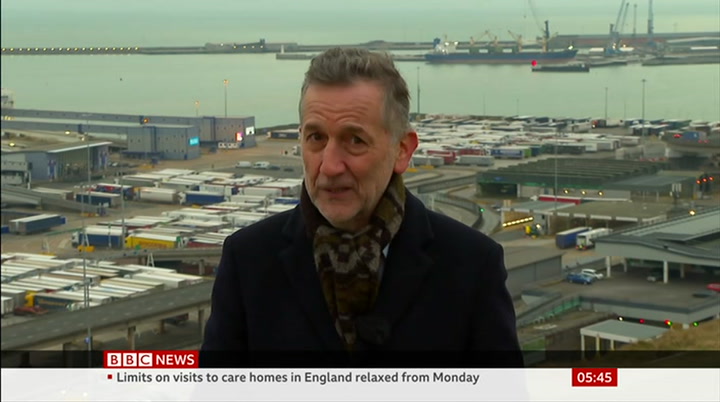 hits of 2020, trade between the uk and the eu did not. and it is almost certainly going to stay that way. the government says that traders need to get used to new rules and focus on new trade deals and on the other side of the world. but two years after britain left the eu, the idea of seamless trade across this narrow stretch of water, that ship has already sailed. four days at the border they are! stay with us on bbc news, still to come: are you ready to go nolo? we look at the growing thirst for no—or—low alcohol drinks this is the moment that millions in iran have been waiting for. after his long years in exile, the first hesitant steps of ayatollah khomeini on iranian soil. south africa's white government
5:47 am 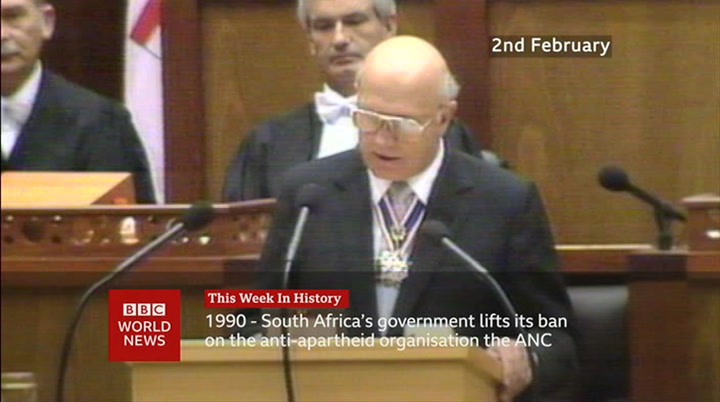 has offered its black opponents concessions unparalleled in the history of apartheid, and the anc leader nelson mandela is to be set free unconditionally. mission control: three, two, one... a countdown to a critical moment — the world's most powerful rocket ignited all 27 of its engines at once. and apart from its power, it's this recycling of the rocket slashing the cost of a launch, that makes this a breakthrough in the business of space travel. two americans have become the first humans to walk in space without any lifeline to their spaceship. one of them called it "a piece of cake". thousands of people have given l the yachtswoman ellen macarthur a spectacular homecoming - in the cornish port of falmouth after she smashed the world record for sailing solo - around the world, non—stop. this is bbc news, the latest headlines: the united states has urged
5:48 am 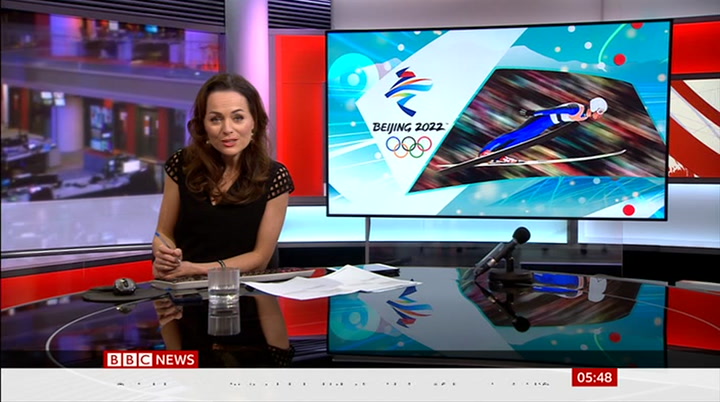 china to use its influence with moscow to discourage any russian invasion of ukraine. the us coast guard has suspended the search for dozens of people lost after their boat capsized off the florida coast. the olympic games are normally a huge marketing opportunity for sponsors, a showcase for global brands. however, beijing 2022 is causing a huge headache for the 13 official corporate partners of the olympics. the us, uk, australia and canada are among the countries that have announced a diplomatic boycott of the games due to accusations of human rights abuses, though their athletes will still participate and many sponsors are deciding it's saferjust to keep quiet as our silicon valley correspondent, james clayton, has been finding out. china's winter olympics may have a shortage of snow but there has been something else missing as well. many of the
5:49 am 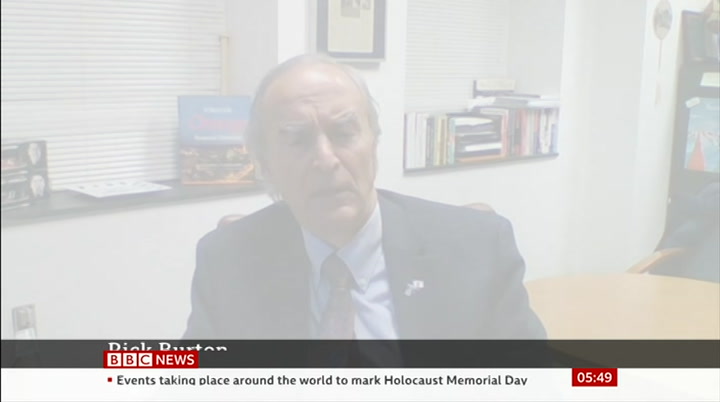 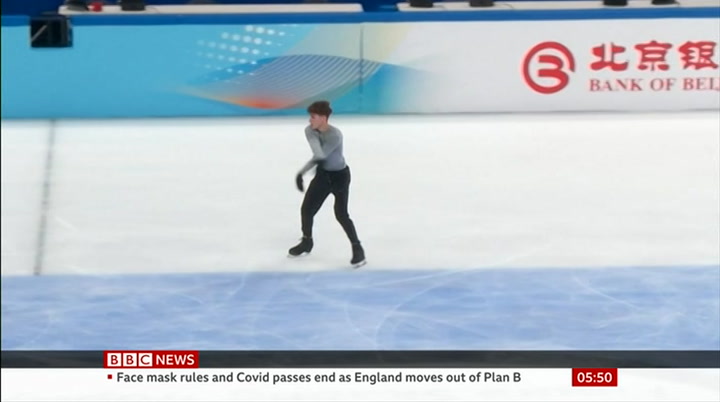 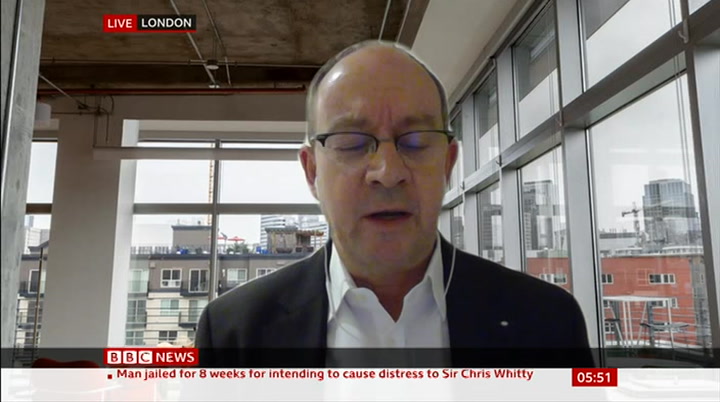 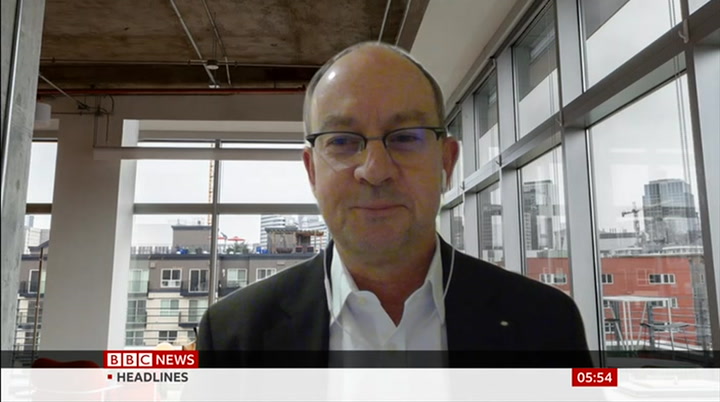 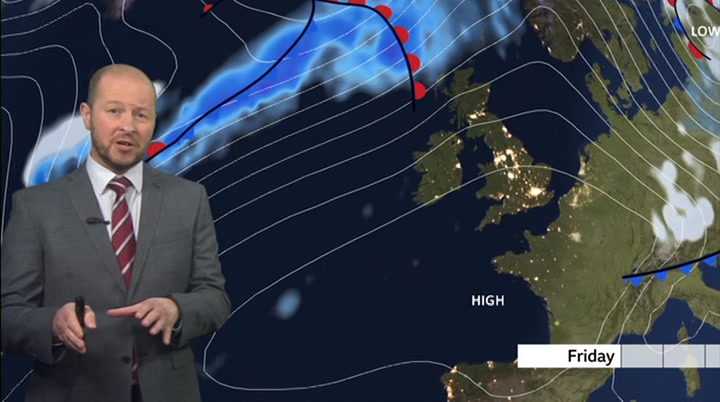 so much. it has been a pleasure as always. breakfast is coming up as always. breakfast is coming up and loads more of me on world news, internationally. you can reach me on twitter — i'm @vfritznews see you soon. hello there. after the sunshine on thursday, we've seen clearer skies and lighter winds overnight, so it's pretty chilly out there for many. but the weather is going to change once again because during friday, we're going to find more cloud coming in from the atlantic, and that in turn will bring in some milder air as well. now, at the moment, high pressure is centred more to the south of the uk. we've got these weather fronts bringing some rain towards scotland in particular during friday, but also drawing in these stronger winds from the south—west, bringing in that milder but generally cloudy air as well. ahead of that, though, we do have a touch of frost across more central and eastern parts of the uk to start the day. those temperatures lifting in the west as the cloud comes in. we've also got a few mist and fog patches across parts of england and wales. those will lift. there will be some early sunshine, but many areas
5:56 am 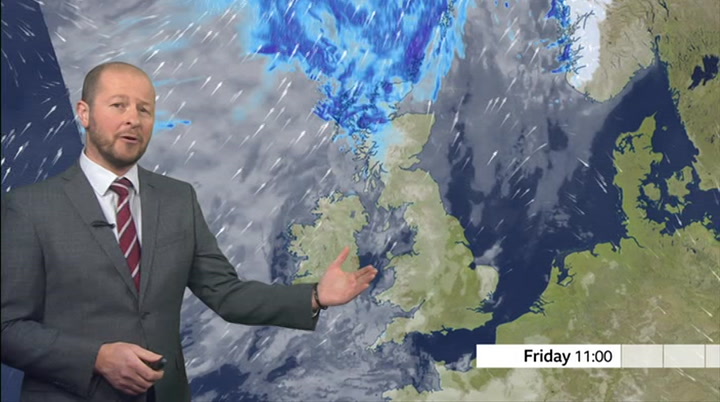 are going to cloud over. we will keep some hazy sunshine in the south east perhaps into the afternoon. a bit of drizzle out towards the west. most of the rain pushing eastwards across scotland as those winds strengthen. drawing in that milder air, so temperatures, double figures for most of us, a little bit chillier towards the south east perhaps. it does stay very mild, actually, overnight. those temperatures aren't going to drop an awful lot because we've still got those run of strong, very mild winds. in fact, it will be very windy overnight across scotland and northern england. some very gusty winds, particularly as that rain band moves down across scotland on that weather front there. but again, that rain, whilst heavy in scotland for a while, is going to become much lighter as it sinks down into england and wales and moves away from northern ireland. after the rain, what there is of it, we're going to find sunnier skies and some showers following on, and a strong wind continues as well, particularly windy in scotland, gusts of 60 mph likely here. southern parts of england may well stay dry, and here we'll see the highest temperatures, 13—14 degrees, it's very mild, but it is turning colder from the north as we get that sunshine and showers mix. the winds do gradually ease down overnight as that high pressure tries to build in, but this is heading our way for the second half
5:57 am

of the weekend. another weather system coming in from the atlantic. chilly start probably on sunday, much cooler than saturday morning. we're going to find some rain heading into the north west of the uk. the winds picking up, but as we move into that cooler air, we're going to find the threat of some snow, particularly across highland and grampian and typical temperatures around 8—9.
5:58 am 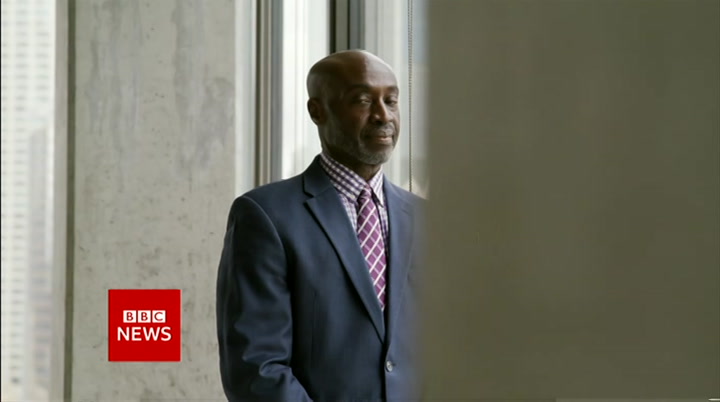 good morning, welcome to breakfast with naga munchetty and charlie stayt. our headlines today. when the government go ahead with the rise in national insurance in april, after a minister admits it is unpopular and everyone is feeling the squeeze? british sign language is on course to become a recognised language in england — making it more prominent in public service announcements. we meet those on both sides of the home care crisis — as providers turn away requests due to staff shortages. offices are open but our work is back at their desk? at the end of the first full week without work from home guidance in england and northern ireland, we will find out.
6:01 am

there is no
left
right
Borrow Program
tv