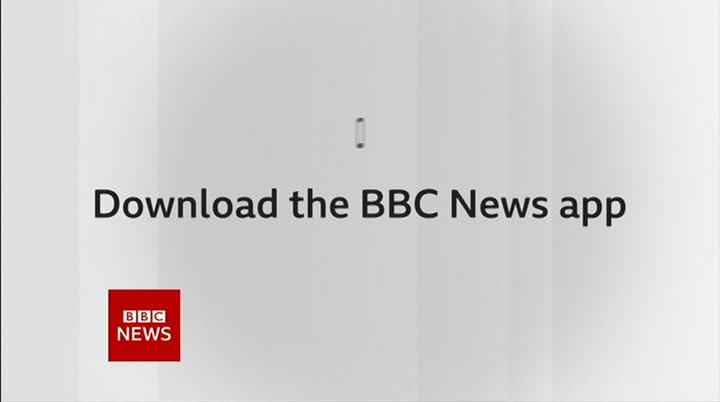 this is bbc news with the latest business headlines for viewers in the uk and around the world. the boss of credit suisse resigns, after an internal investigation into his out—of—work conduct. getjabbed or stay at home. france gets tough on the unvaccinated as it approves a new vaccine pass, despite huge protests. the gateway for a prosperous future. we take a look at sri lanka's proposed new port city which is backed by chinese investment, however some locals are concerned about beijing's growing influence. and the show must go on. a virtual world economic forum gets under way this week. we talk to an award—winning company in cape town that helps ex—convicts get back to work.
5:31 am 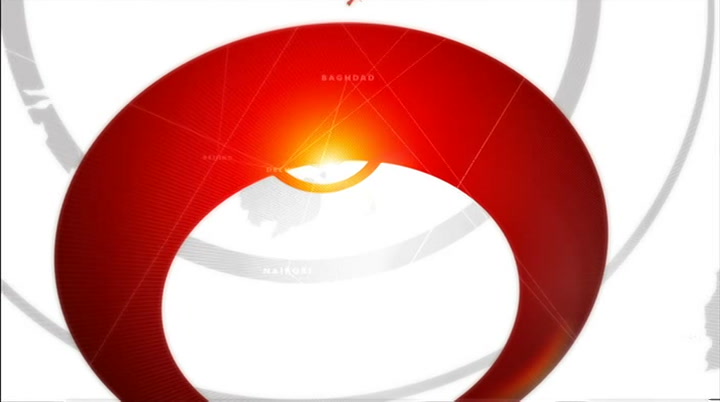 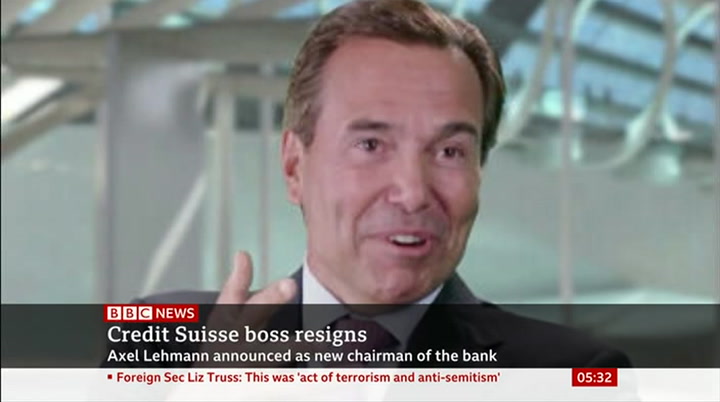 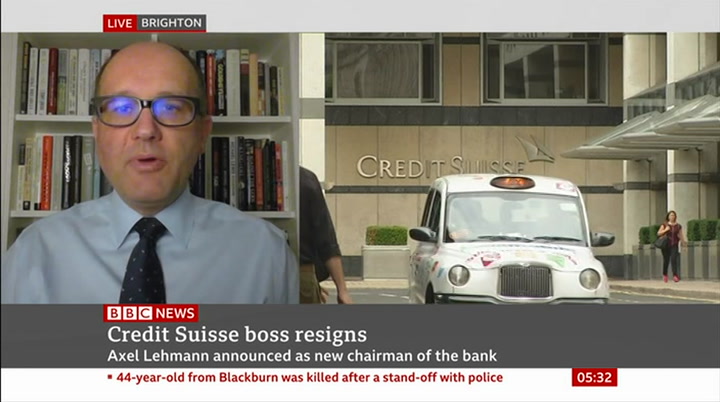 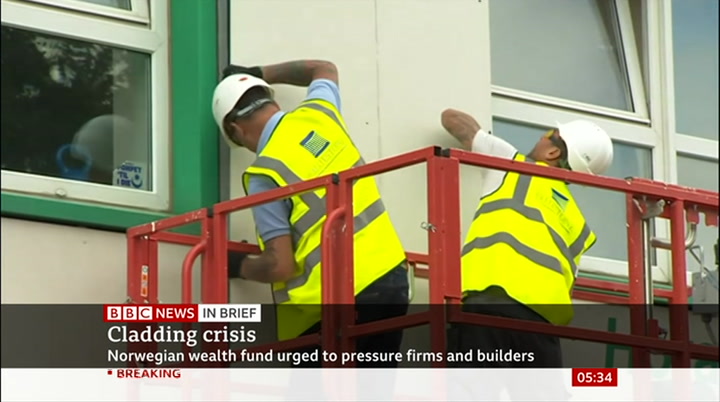 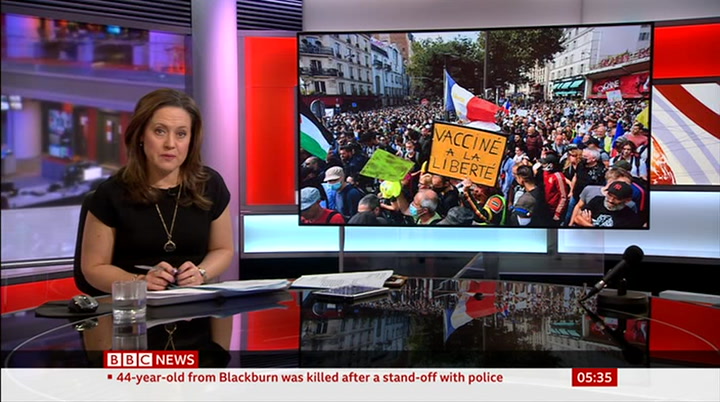 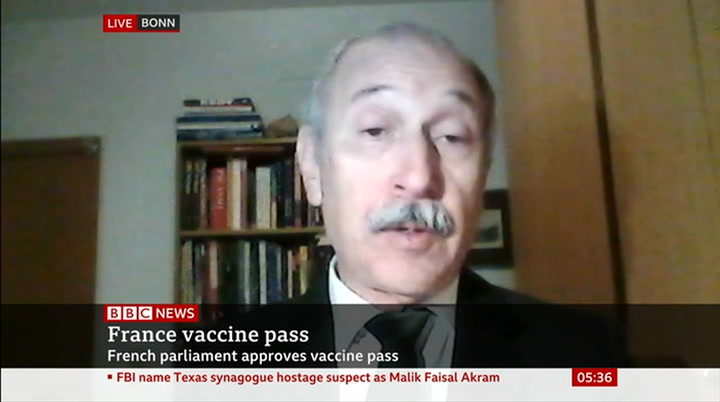 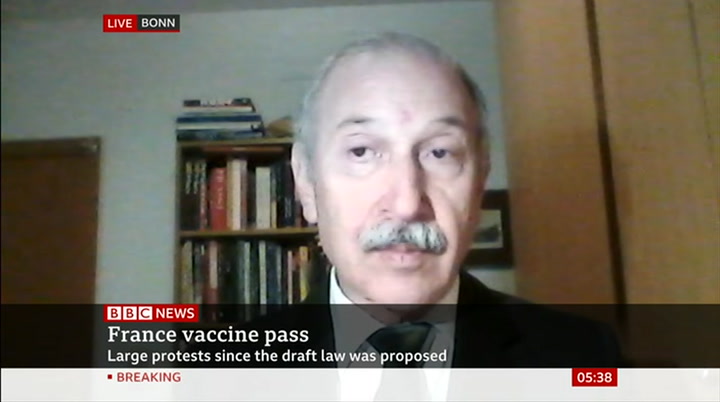 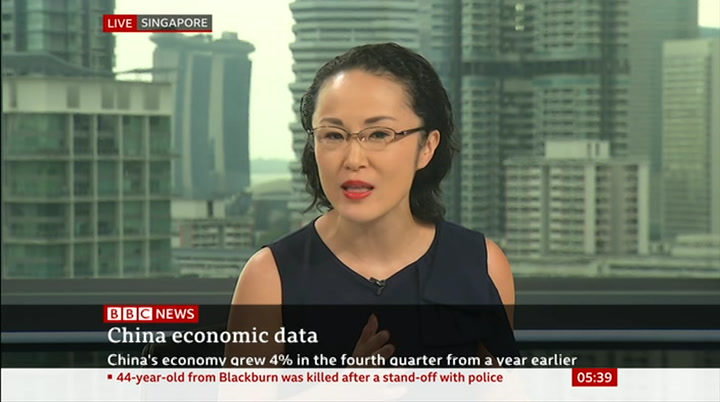 on manufacturers — supply chains and the wider economy. joining me now from singapore is our asia business correspondent, mariko 0i. give us more detail. where china is headed the global economy tends to follow. indeed, sally. it is important to remember that while growth of 8.1% is indeed impressive, the country was in the middle of pandemic lockdowns in 2020 so it is coming off a very low base and when you look at the latest data closely there are some worrying signs as well. firstly the property is set that we keep talking about, it is attracting less investment because some of its biggest developers are facing a debt crisis and now the industry slowdown was triggered by beijing's introducing new measures to limit the amount of
5:40 am 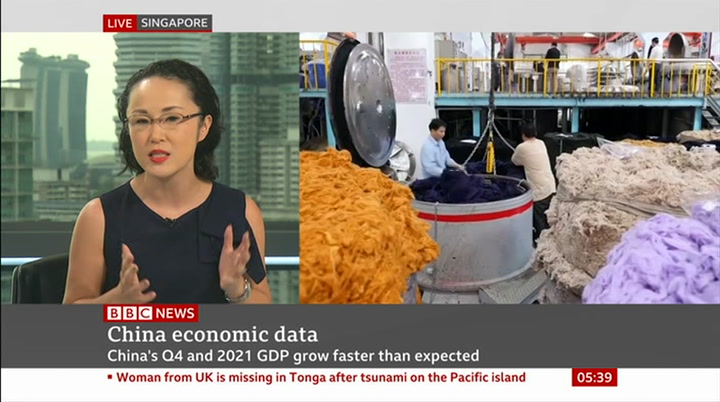 money some of those real estate companies could borrow. it does, is a bit of a surprise but at the same time a shock and that could affect the rest of the economy because construction of accounts for about a quarter of the gdp. consumers seem to be feeling less optimistic as well with retail sales figures coming in much weaker than expected. china strict covid zero policy has meant that some major cities began to enter lockdown in last month because of omicron and of course we are yet to see the full impact of that. that is another worrying sign. in order to help cushion the slow down the country's central bank has, for the first in almost two years, taken the unexpected step of making some key loans for businesses cheaper but beijing is likely that make unlikely to go further because the debt clampdown remains and they are unlikely. that policy before the olympics.
5:41 am 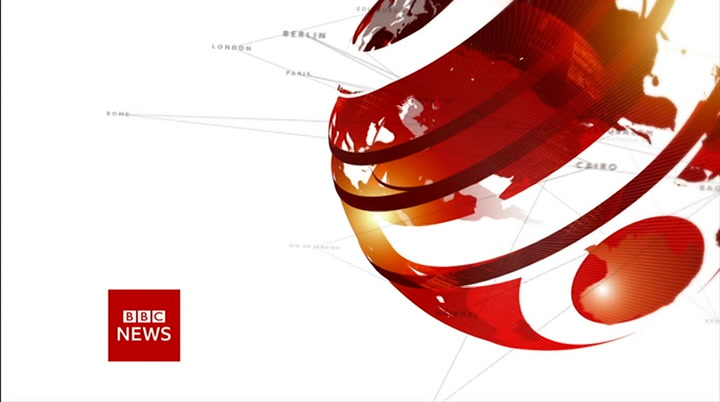 they called him the 'butcher of lyon'. klaus altmann is being held on a fraud charge in bolivia. the west germans want to extradite him for crimes committed in wartime france. there, he was the gestapo chief klaus barbie. millions came to bathe as close as possible to this spot. - a tide of humanity that's i believed by officials to have broken all records. this is bbc world news, the latest headlines: novak djokovic arrives in dubai after being deported from australia, where the tennis 0pen he was hoping to compete in gets under way. two teenagers in the uk have been arrested in connection with the siege at a synagogue in texas on saturday. the self—isolation period for people who test positive for covid—i9 has been cut to five full days in england.
5:43 am 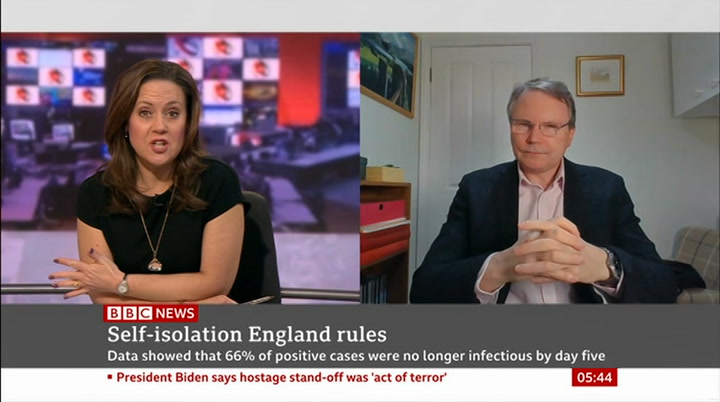 isolation. it is going to help businesses. there are many businesses. there are many businesses who are really suffering from staff absences at the moment. perhaps ten to 20% absence rates across a wide range of sectors which is really having a major impact on business. let's not forget the most employees are really suffering quite a mild illness. the thing which is keeping them away from work is the isolation requirement, so if we can safely reduce that isolation requirement, it's very positive business. requirement, it's very positive business-_ business. some sectors are particularly _ business. some sectors are particularly vulnerable, - business. some sectors are particularly vulnerable, we | particularly vulnerable, we have mentioned the of course, hospitality as well, whereas other businesses can ride this storm much more easily, can't they, if their staff are working from home anyway? absolutely. if you are in a business where employees need to be present in order to deliver a service, such as the ones you have mentioned, the mail system, transport system,
5:45 am 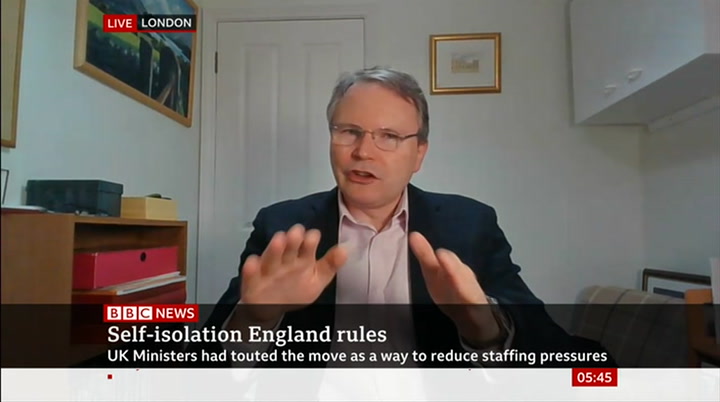 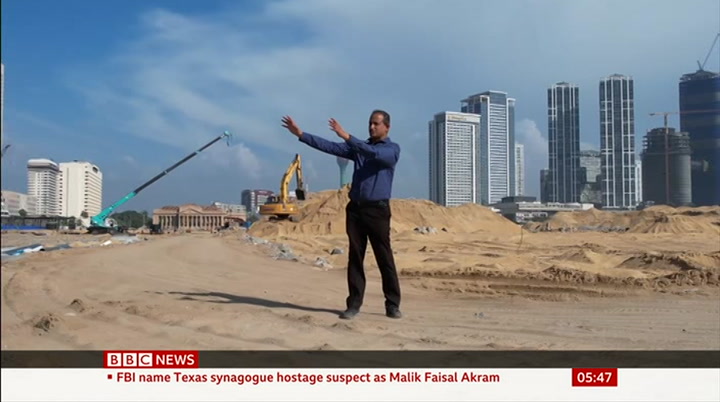 a whole new man—made land adjacent to colombo, now a vast expanse of sand. this was soon transformed into a high—tech port city, and here, sri lanka is building an international financial centre with tony's funding. this land was under the sea a few years ago. a chinese company has invested $1.4 chinese company has invested $1.1; billion to reclaim this $1.11 billion to reclaim this entire land, about 269 hectares. the sri lankan government wants to build a huge financial district rivalling singapore or dubai. sri lankan officials are excited about the prospects. it excited about the prospects. it will be an economic game changer, what you see out here, which is desert at the moment was reclaimed from the sea, which gives three longer a chance to redraw the map, build a city of world—class proportions and functionality,
5:48 am 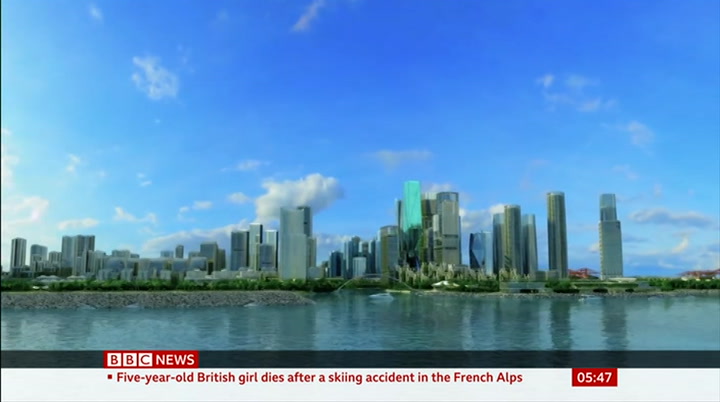 around $8 million to china alone, while amazing, city like hong kong and sri lanka will sit in the strip of the indian ocean. today we should have seen the start of the world economic forum in davos, however like many other events the in—person gathering is postponed due to omicron. but world leaders and company bosses will still meet online and at the digital event will also announce its 15 social innovators of the year for 2022. the awards are handed out by the schwab foundation for social entrepreneurship, which is part of the wef, for their work tackling global challenges. joining me now from cape town is one of the winners, rene parker, who's the ceo and managing director of reconstructed living labs. congratulations to you and all those who work at your company. tell us what is your business and what is it all about? good
5:51 am 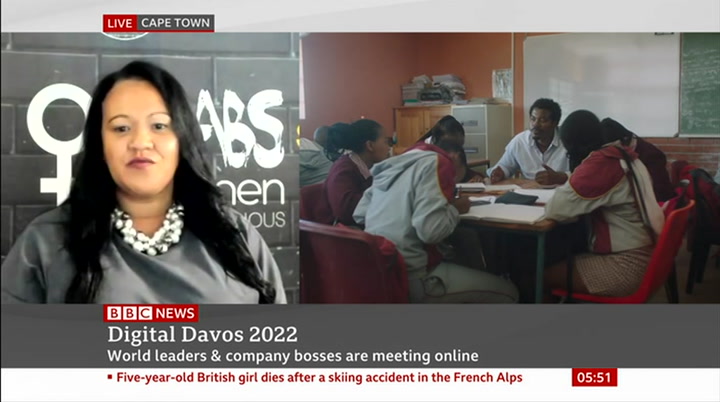 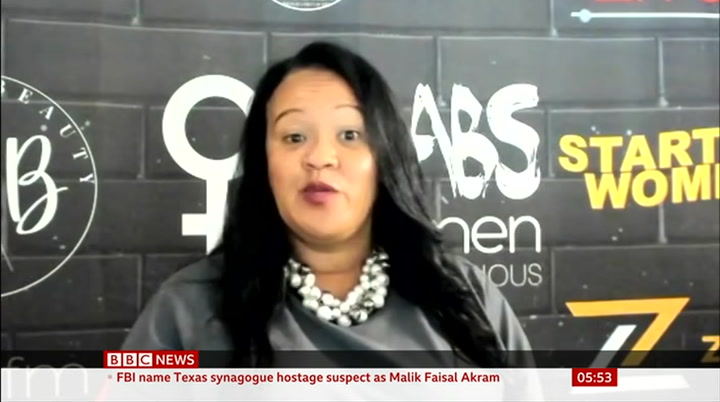 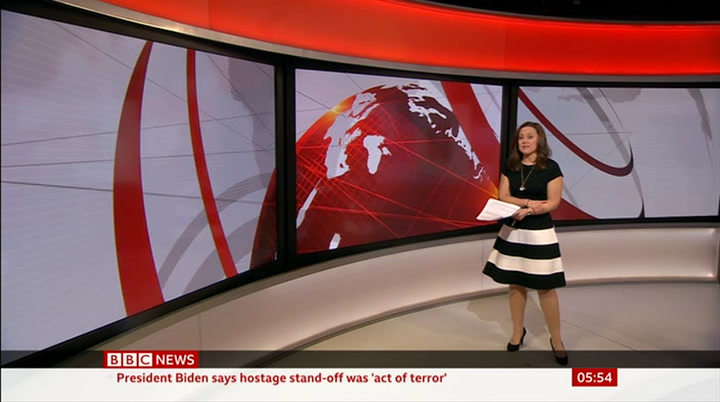 the individuals themselves, but how it catapulted and enabled communities to provide broader services and other assets to their organisation, always staying abreast of what is new and what is happening because we do believe, we don't want anyone to be left behind,. it's been an absolute pleasure to speak to you and congratulations once again, thank you for telling us about what you were up to. let briefly show you financial markets in asia, no action on wall street, it's a public holiday so they are entering the long weekend but what is standing out as the price of oil, of $86 per barrel currently, choppy waters in general in asian markets partly because of the information and obtain about growth which was mentioned earlier but pointing out the retail sales, only coming in ati.7% out the retail sales, only coming in at 1.7% growth,
5:55 am 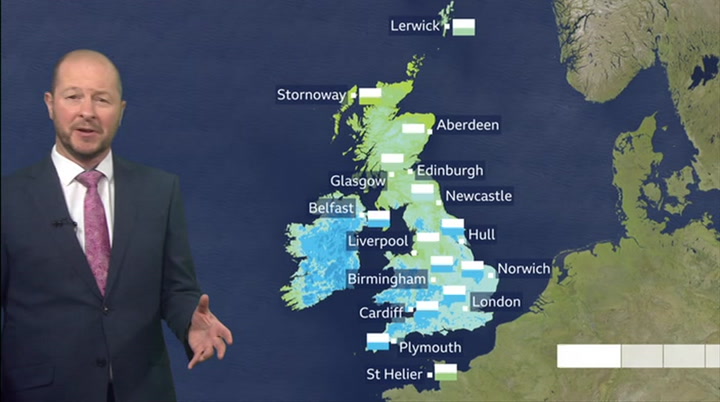 analysts were expecting nearly 4% so that does not bode well, consumer confidence very low in china. you are up—to—date, thanks for your company, and i will see you soon. hello there. a bit like it was last week, this week is going to be a quiet one. high pressure never too far away, and that means a lot of dry weather. indeed, some parts of the midlands, eastern england could be completely dry this week. it is going to be quite cold, not so much during the day but i think overnight, we are going to find some frost. with clearer skies developing at the moment, we start monday with a frost, particularly across england, wales and also northern ireland. some patches of mist and fog around by the morning, mainly across parts of wales and the west country. those should fairly quickly lift and there's going to be a lot of sunshine around for most of us, and light winds too. the winds won't be as strong as they were on sunday in northern scotland — should be dry here but there will be a lot of cloud — and we're sitting at temperatures of 8 or 9 degrees, which isn't bad, really, for this time of the year. now, i mentioned high pressure.
5:56 am 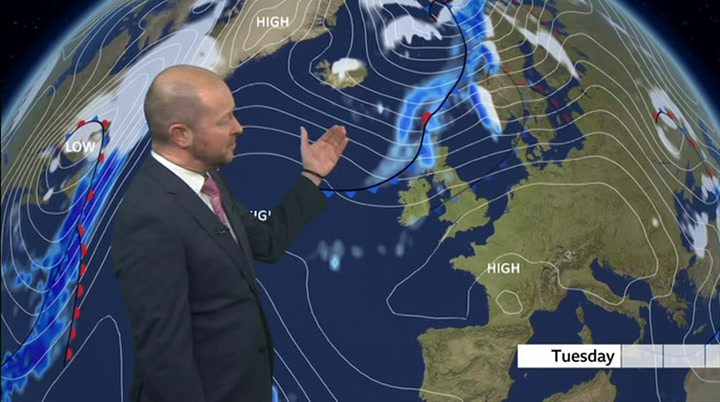 there it is on monday. as we head into tuesday, these weather fronts are poking in from the north—west but underneath the centre of the high, with those clearer skies and light winds, we are going to start with more fog on tuesday, particularly across parts of the midlands, east anglia and the south—east and whilst it lifts, it could stay a bit grey all day. some sunshine around but more cloud coming in on tuesday, and those weak weather fronts bring in some rain across northern ireland, eventually into western parts of scotland, but lifting temperatures perhaps into double figures. likely to be a colder day, though, for england and wales, especially where it stays grey and misty. those weather fronts continue to move down from the north—west with a stronger wind, as well, but those weather fronts are weakening all the while, so there's not much rain away from north—western parts of the uk. more cloud, a bit of patchy light rain or drizzle to clear from england and wales, then sunshine follows from the north, strengthening those north—westerly winds and it's getting colder, as well, hence those wintry showers in the far north of scotland. could make double figures still in the far south—west of england. now, i mentioned high pressure is going to dominate over the week ahead, and another one is coming in later in the week but for a while, it's going to be centred to the west of the uk, hence those colder north—westerly winds
5:57 am 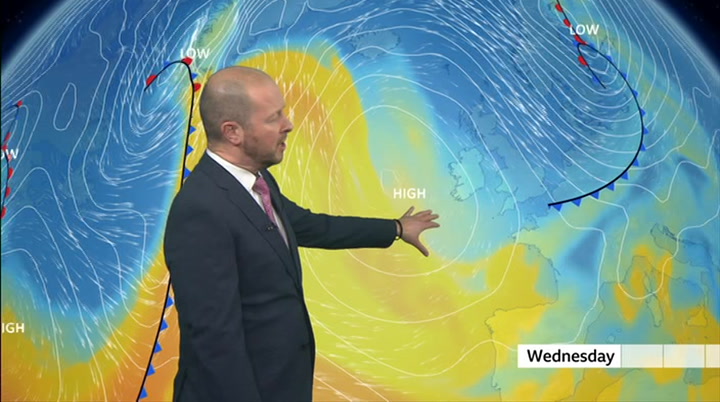 coming our way and dropping the temperatures overnight, so thursday, a more widespread frost. those are the temperatures in towns and cities. maybe a bit more cloud keeping temperatures up in northern ireland and there'll be more cloud across northern scotland, a stronger wind here, maybe pushing one or two showers down some of those north sea coasts but generally, thursday will be dry and, again, there'll be a lot of sunshine, a chilly wind, yes, and temperatures will be typically around 6—8 celsius.
5:58 am 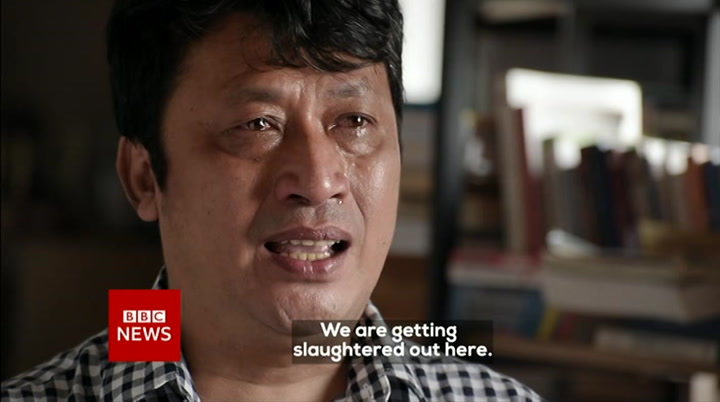 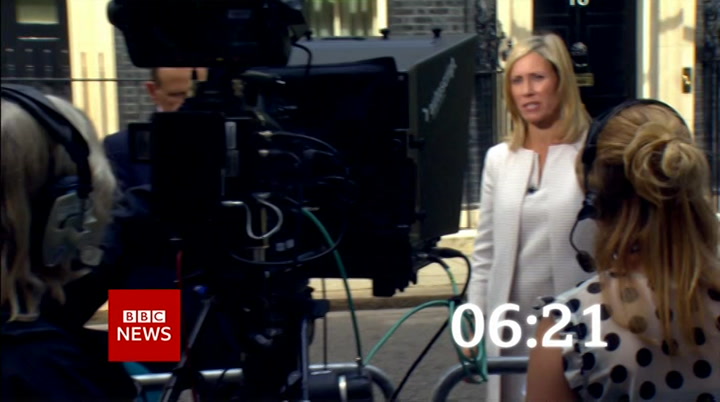 good morning, welcome to breakfast, with dan walker and sally nugent. 0ur headlines today. two teenagers are arrested in manchester as part of the investigation into the texas synagogue siege — the man behind the attack was from blackburn. search and rescue flights begin over tonga, as fears grow for a missing british woman who it's thought was swept away in the tsunami. tory mps return to westminster after a weekend of hearing what voters think of the downing street lockdown parties. the number of families struggling to pay for their gas and electricity is expected to treble. average bills could rise from £100 a month, to 150 in april. we'll speak to some of those already worried about the increase.
6:01 am

it's come to the point where, if i'm a bit short on electric
left
right
Borrow Program
tv