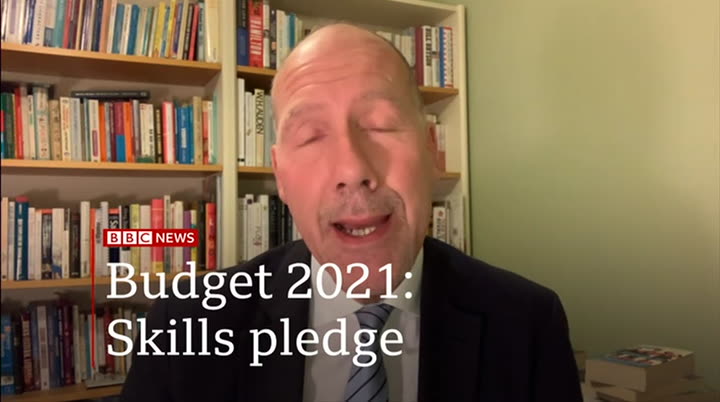 to allocate £1.6 billion for t—levels skills training for 16 to 19—year—olds as "a good start". it is a bit of a gamble from the government because we don't know yet whether those 16—year—olds will want to do t—levels when already there are courses there which appear to have suited them really well. colombia's most wanted drug trafficker is captured — after a joint operation by the armed forces, and the police. a candlelit vigil to remember halyna hutchins, the film—maker killed on the set of an alec baldwin movie. and gone for $110 million: a las vegas hotel auctions off its collection of picasso artworks. sarah mulkerrins has the sport. let's begin with a superb showing from england's cricketers — a perfect start for them to their t20 world cup campaign. they thrashed defending champions west indies by six wickets,
9:31 am 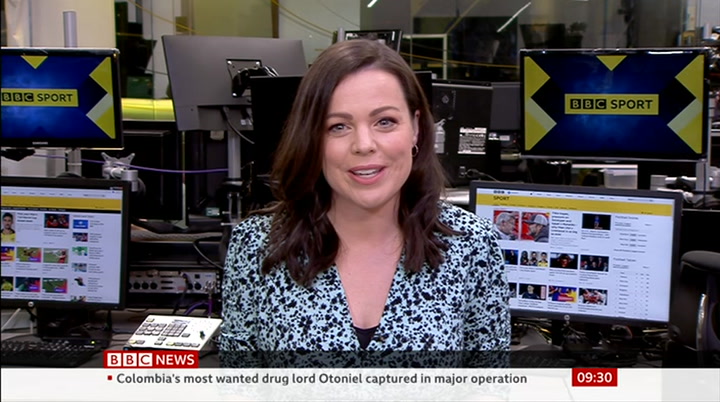 after bowling them all out forjust 55 runs. our sports correspondent joe wilson reports. the cricketers of west indies and england shared the stance against racism at the t20 world cup. they share memories in this competition. the last final, when carlos braithwaite�*s magnificent sixes took the trophy away from england. the best of times, the worst of times. but it motivated england. they are now ranked top of the world in this format and from this moment, we saw why. the west indies side was mature. chris gayle, now 42, made 13. success for tymal mills on his england comeback. dwayne bravo, jonny bairstow. caught it. the captain's brain beneath the caps. everything eoin morgan thought worked and how west indies obliged.
9:32 am 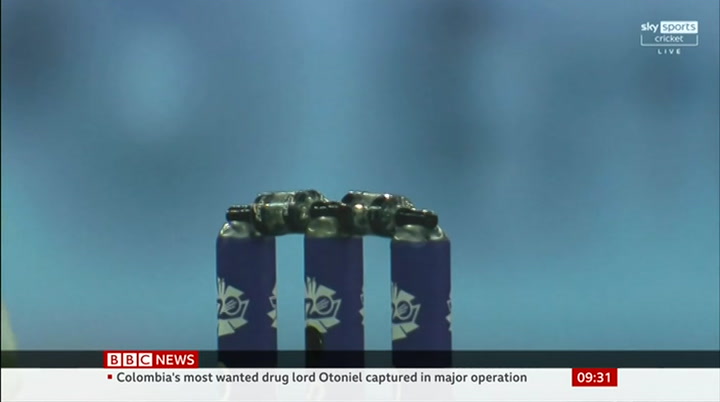 where england's fielders stood west indies batters hit — there! four wickets for adil rashid. 55 all out 7 completely the new england. the batting wasn't perfect, though. hosein�*s agility to catch livingston. four wickets down but in the ninth over it was done. england looks like the world number one. joe wilson, bbc news. there was a rout at stamford bridge, as the premier league's top side chelsea beat bottom—of—the—table norwich 7—0. mason mount hadn't scored since may but he started the hosts off inside the first ten minutes — and that was just a sign of things to come. callum hudson odoi, reece james and ben chilwell all got on the score sheet, before mount finished off the scoring, with his first chelsea hat—trick. manchester city are breathing down chelsea's neck, just two points behind them. phil foden was impressive yet again,
9:33 am 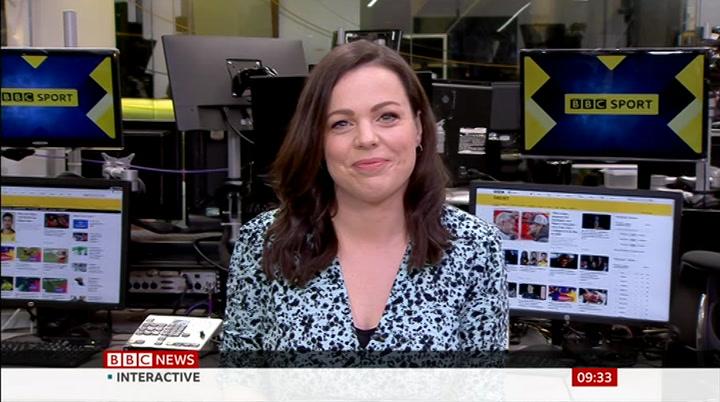 towards, and of course go past them. a point at st mirren today will be enough to put rangers back on top of the scottish premiership. they slipped below hearts on goal difference after they drew 1—1 at home to dundee. hearts could have gone clear at the top — john souttar put the edinburgh side ahead but poor defending was punished and jason cummings equalised. england's women continued their unbeaten start to qualifying for the 2023 world cup. they comfortably beat northern ireland 4—0 in their first competitive match at the new wembley. 23,000 fans watched as beth mead became the first woman to score a hat—trick for england there. that took them back to the top of their group
9:35 am 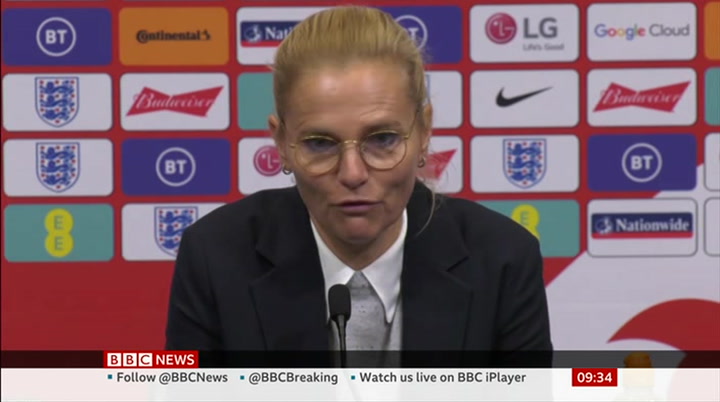 with three wins from three. northern ireland stay third. iam very i am very happy for the team that she scored goals and for her especially but the team feels really good and the players feel comfortable and it feels like we are cooperating and collaborating together and the players can shine to. max verstappen edged out lewis hamilton in qualifying for the us grand prix, which returns after last year's race was cancelled due to the pandemic. the championship leader was two tenths of a second quicker than hamilton's mercedes, as he claimed his ninth pole of the season. verstappen will also have support from his red bull team mate sergio perez who'll start from third. great britain have won a second gold medal at the track cycling world championships in france — and once again it came in the omnium, ethan hayter following katie archibald's success by dominating the points race, the final event of the four—race contest. it's his first
9:36 am 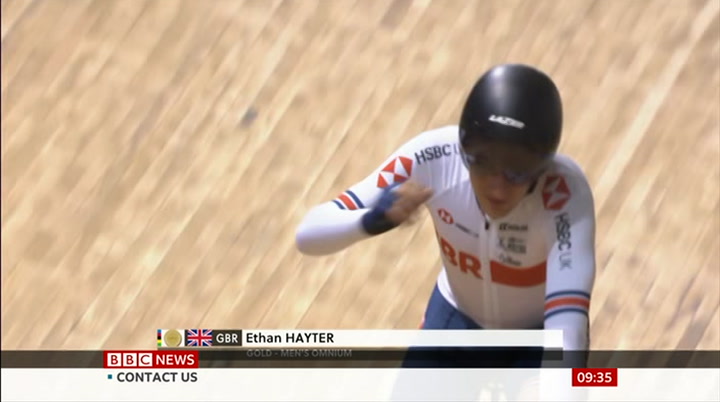 individual world title. a couple of years ago, the last time i took part in the world ominium, i was leading literally until 20 laps to go. that was obviously quite hard to do. i was 50 laps in and i had built up a bit of a lead, i felt good still and i thought i was in control 7 crazy feeling. that's all the sport for now. hello and welcome to our look at what this morning's papers are saying. with me are the social commentatorjoanna jarjue, and dave wooding, the political editor of the sun on sunday.
9:37 am 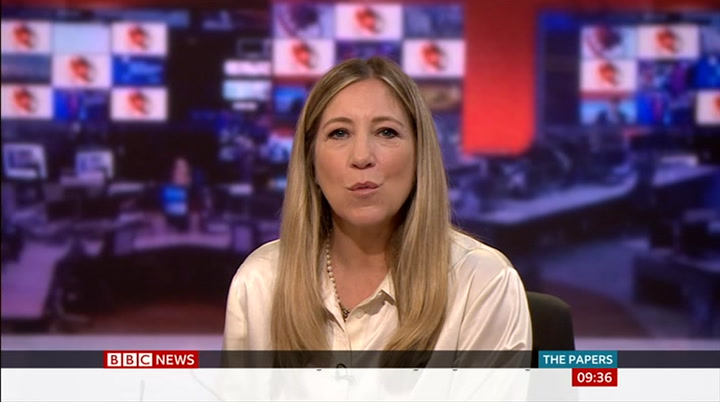 welcome to both of you. let's have a look at the front pages. amid rising covid infections, the observer says the uk health security agency — formerly public health england — has written to local councils to canvass their level of support for the rollout of �*plan b�* covid rules. the independent has been speaking to health professionals who warn the nhs faces its hardest winter yet — as soaring covid cases combine with a surge in a&e demand. the telegraph says the chancellor will use next week's budget statement to announce plans for a digital overhaul of the nhs. the paper also has a picture of the head armourer on the film set where alec baldwin shot and killed cinematographer halyna hutchins. the upcoming budget is also the lead for the express which says plans to beef up border security
9:38 am 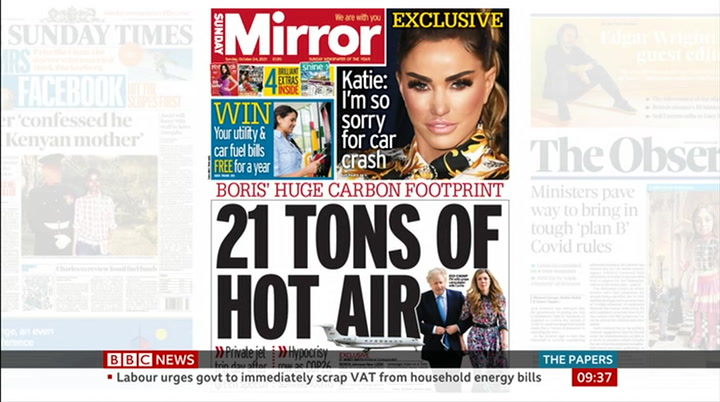 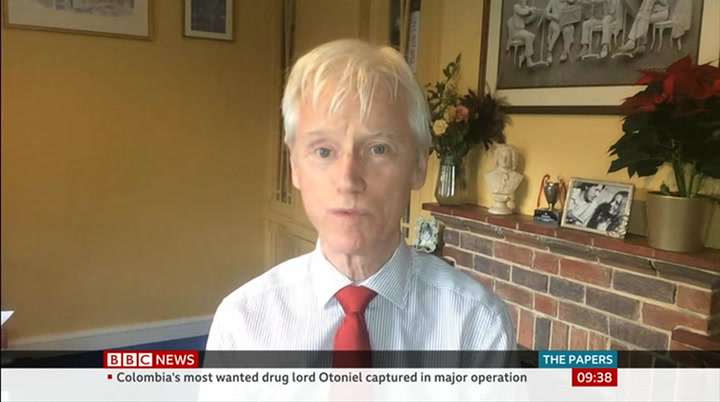 wherever possible. it is not quite a lockdown but it is tightening up restrictions again. and of course this uk healths security agency has written to all these public bodies and local council chiefs and asked what is your view on this, what do you think? what sort of restriction should we impose? that then sets running there is a secret plan to impose up plan b at some stage. joanna, what is your sense on how ministers best handle this in fact that we have seen this before and this it will not happen and then it happens and last christmas it was very late in the day people had to change the plans and yesterday we had a warning from someone saying he is concerned about the prospects of another cancelled christmas and therefore it is better to bring in restrictions now? i
9:40 am 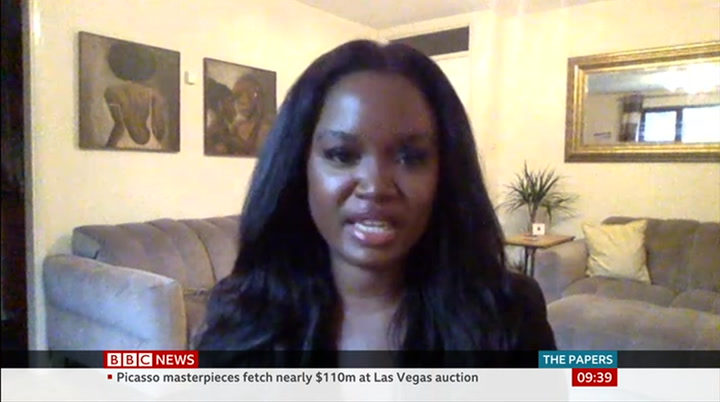 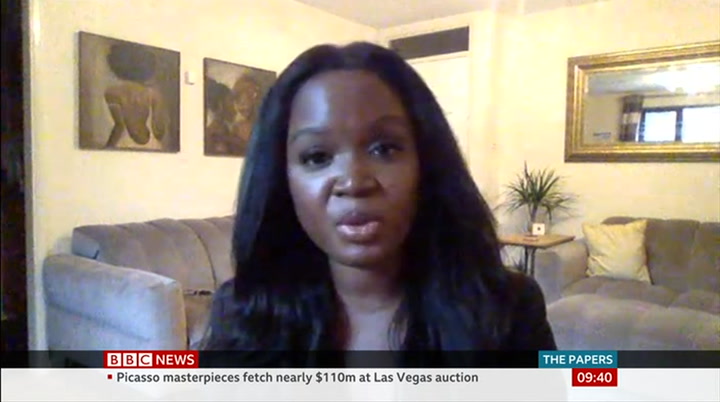 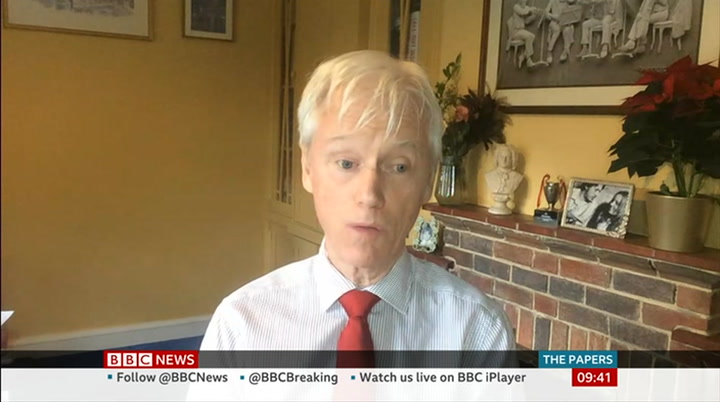 covid, even more siren voices then we had in the past. infection rates are going up. 50,000 is the latest figure we are hearing but deaths and serious admissions to hospital and down. i think 6% of hospital admissions at the moment, people in hospital are suffering from covid but it is right to be on guard. that influenza crisis will add to that and it is important we get influenza jabs this year as well as covid. than jabs this year as well as covid. an extraordinary statistic that one in ten nhs trust still operates on a paper based system. it seems now
9:43 am 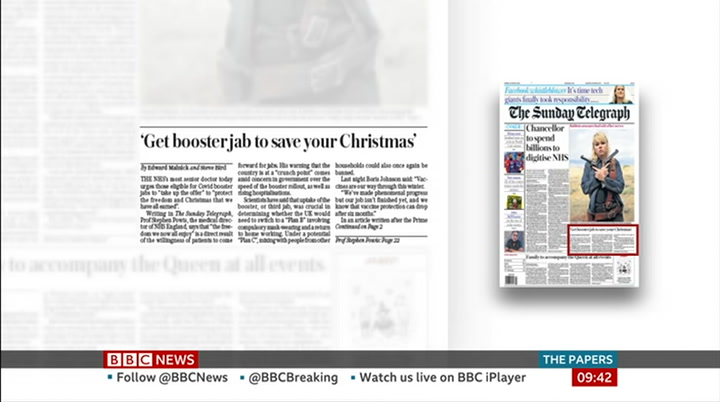 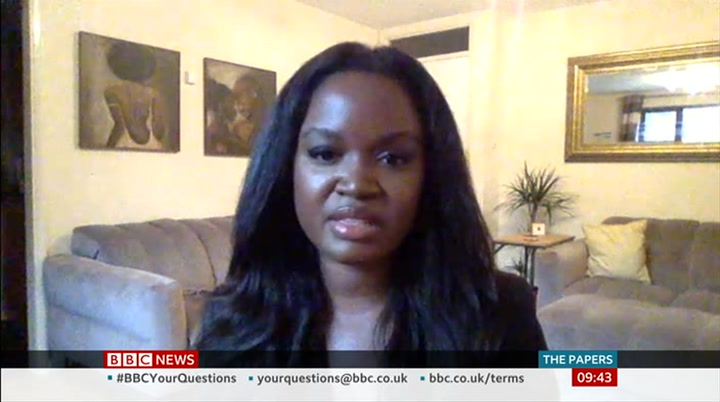 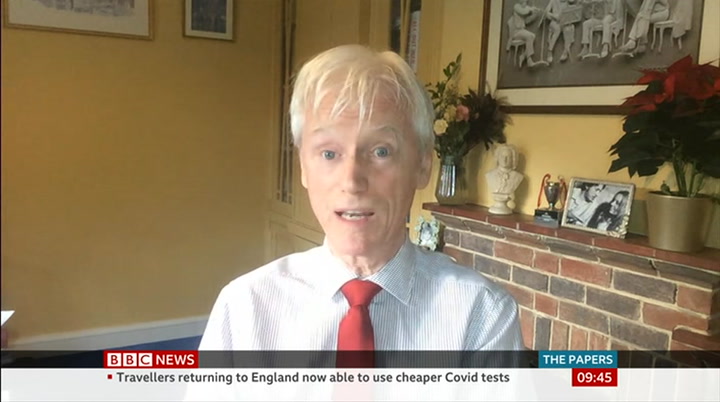 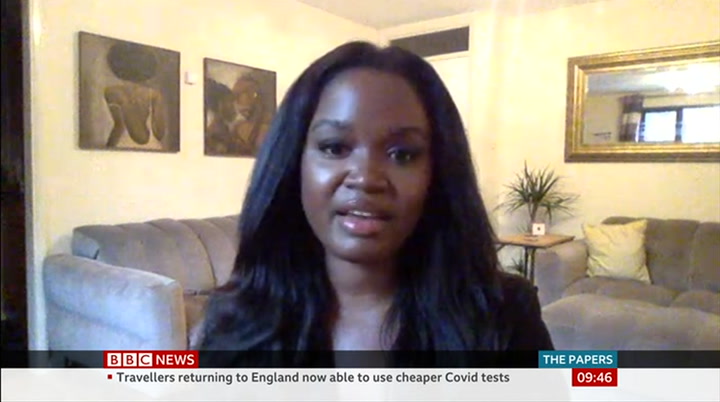 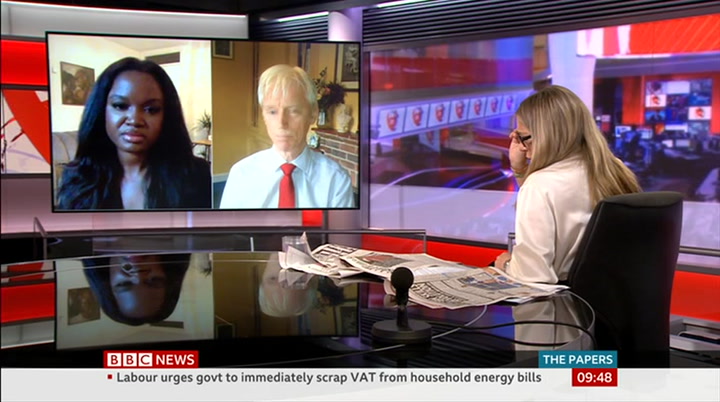 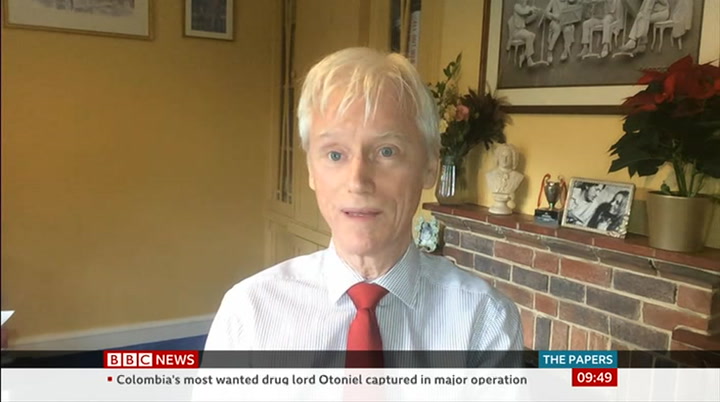 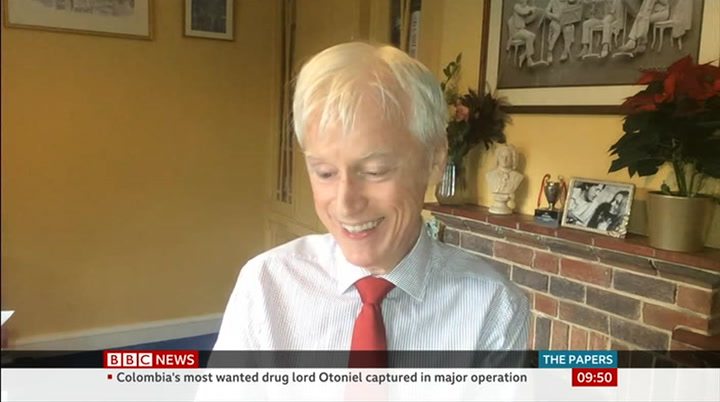 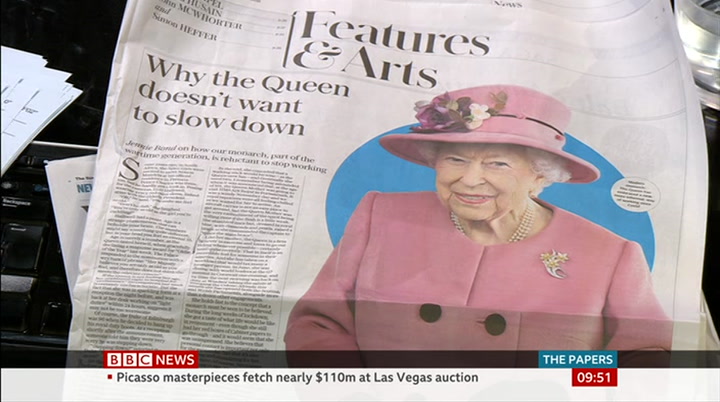 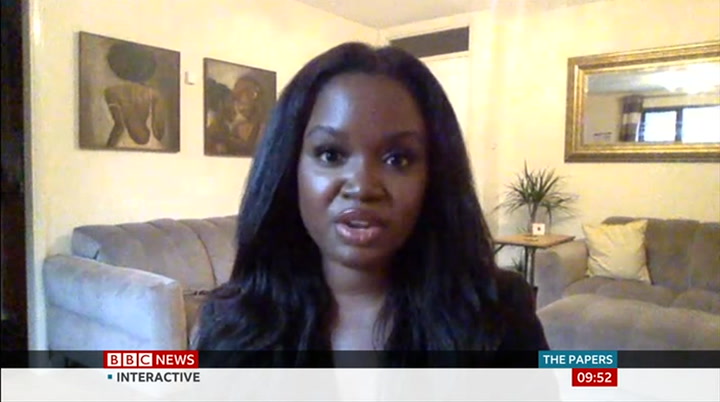 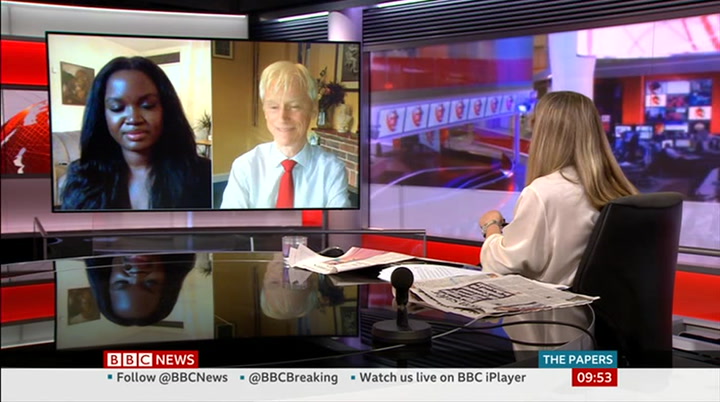 author, she says it has perhaps gone too far the other way. she said if it was all male dominated that would be a bad thing and if it was all female dominated that will be just as bad, we need to mix it up. on the point is also being made very few young men are breaking into literary publishing and there are not as many male readers out there as female readers. i don't have that is true, but what is your perspective, dave? is the token male in this sense, i am outnumbered by women, men have dominated the literary world for many years but maybe it is the turn of women to have a goal and it is amazing how they have overtaken men. i think there were 39 women on the entry for prizes on the bestselling list a notice 57%. i don't care what
9:56 am 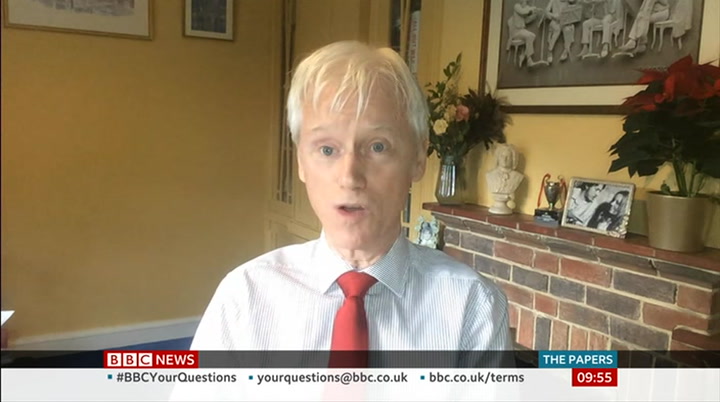 the gender of the person who writes a book is as long as it is good. there are some strides being made in the music world. the bbc proms perform lots of women composer music this year and bbc radio three are playing it on air. perhaps women are coming late to the game and some of these arts and that is a very good thing because there are a lot of very talented femurs out there. by, very talented femurs out there. a good point to end on. we are out of time. thank you so much forjoining us this morning. thank you. that's it for the papers this morning — from us all, goodbye. hello. another mild day out there today with a good breeze blowing around the autumn leaves. that's how it's going to stay over the next few days,
9:57 am 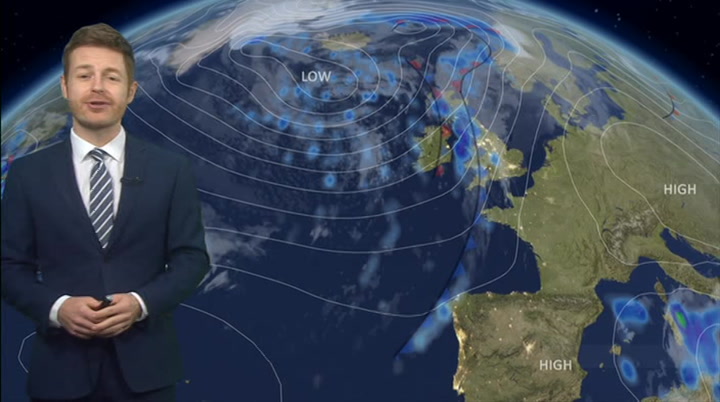 quite breezy at times, mild and with showers in the forecast for today and for tomorrow. here is the satellite picture, and a weather front has been and a weatherfront has been crossing the country, so it was quite wet, quite cloudy at the very least across many western parts of the uk. really quite wet in the southwest of scotland overnight but i think by the time we get to lunchtime the weatherfront�*s here, so cloudy for a time across england and wales before that cloud breaks up to allow some sunshine, and certainly sunny spells in the west of the uk here. most—frequent showers in the north—west of the country, and some hail and thunder possible as well. now, through tonight, the atlantic breeze continues to blow in the showers. there will be clear spells around, too, but thanks to the wind and the mild air that's over us, those local temperatures won't drop off too low. in fact, 12 degrees in london, nine degrees expected in belfast, glasgow and edinburgh. 0nto the forecast for tomorrow. it starts off quite sunny for many parts of the uk, but showers continue there right from the word go in western scotland and northern ireland. there will be showers scattered elsewhere, some of them will move deeper inland
9:58 am 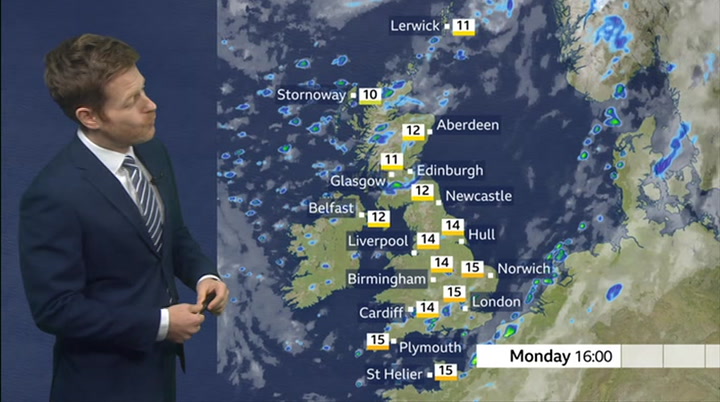 but i think the further east and south—east you are the drier the weather will be through tomorrow. 15 in london on monday, 11 in the north, so temporarily cooling off in the north before the temperatures rise again as we head into tuesday. it's brought in by this next area of low pressure. you can see quite strong south—westerly winds drawing in that warmth from the southern climes, and in fact that mild air spresds all the way across scotland as well. so early in the morning some rain across the western isles and central scotland eventually, too. perhaps some wet weather for northern ireland. much of england and wales stays dry on tuesday, maybe a few spits and spots around the lake district. look at the temperatures, 16 and 17 degrees in some spots, that's way above the average for example in belfast. how about the rest of the week? quite a strong jet stream out in the atlantic, this big dip here spawning an area of low pressure. that means weatherfronts will be heading our way. further heavy rain expected towards the end of the week. at times it could even turn very, very windy but i think the real message for this week is how changeable at times the weather
9:59 am 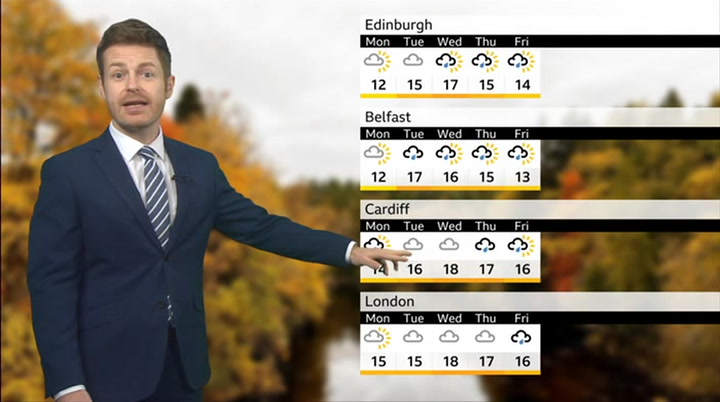 is going to be with those showers coming in and those particularly high temperatures up to 18. bye— bye.
10:00 am 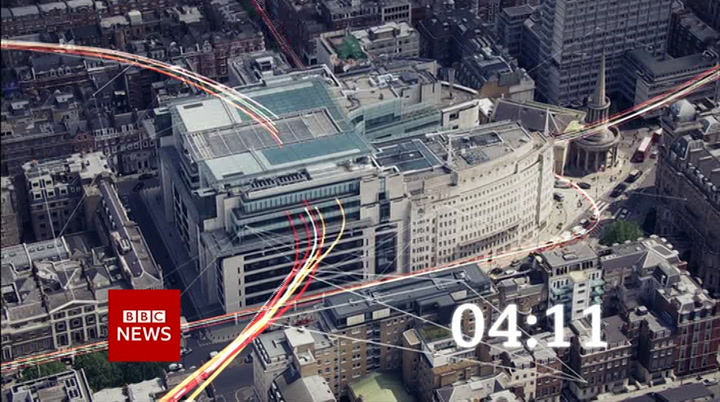 A lively, informed and in-depth conversation about the Sunday papers.