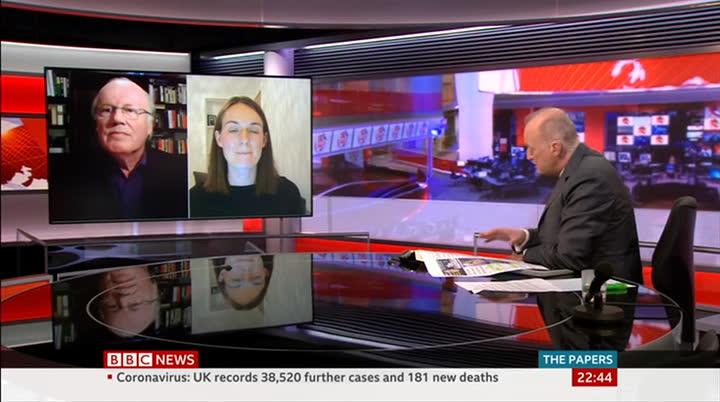 ,is actually quite come at the block is making concessions. european court will not lose its oversight role. this is quite interesting, is to? what if in the time that this would have been reported in very partisan terms and now it feels as if the papers have kind of pulled away from some of that rhetoric. it's obvious this was a real problem. this is something that from the minute this deal was signed two years ago in 2019 there were problems already. people are already criticising it, there were issues on both sides, nobody was particularly happy about it. and problems have only gotten worse and they have come march the front. the fact that the eu has cut out ahead of this and has been briefing is probably pretty part of that i think. they have gone to papers and you can read the quotes that are all very similar. they have given papers and i think that tends to help with that. they framed it in
10:46 pm 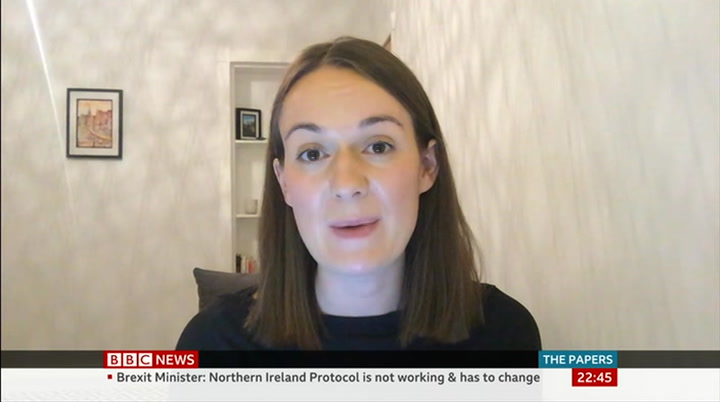 a way that the eu wanted framed basically. they have gone out and briefed on that but i think the telegraph, they do use words like concessions and you see that in bold on their front page. the concessions and you see that in bold on theirfront page. the block on their front page. the block is making concessions because during the negotiations previously they were talking about the eu taking a very hard line on some of the areas around northern ireland protocol and other areas in the price of negotiation so i think there are slight differences in their and slight differences in their and slight points like words used concessions, they're giving it a little bit to us and when you start using words like that it's obvious there's a little bit of changes so still there. i think this was a real problem and people are just happy that this might finally be an end to this or hopefully get to a place that we are not continually talking about it northern ireland protocol.
10:47 pm 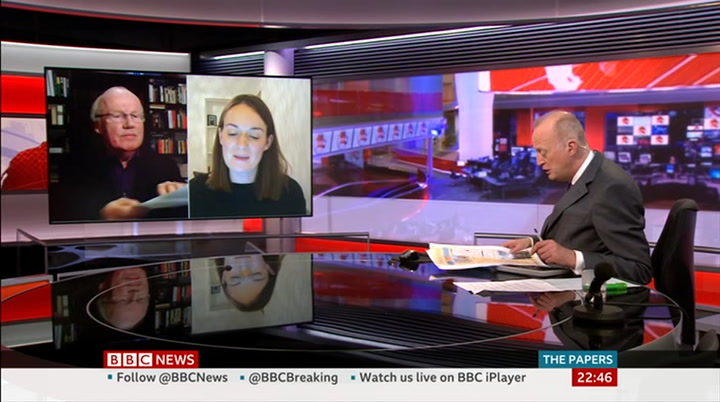 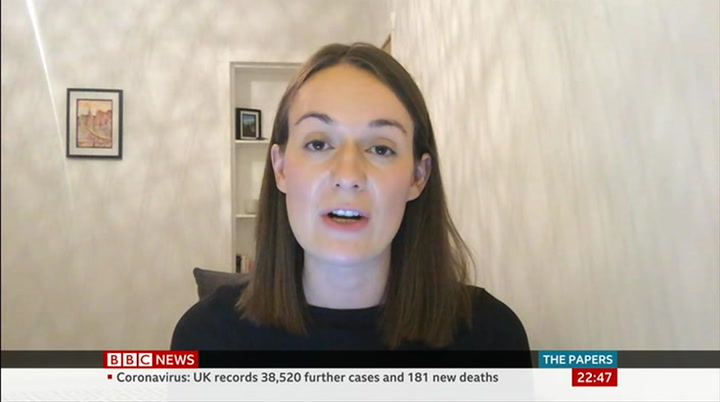 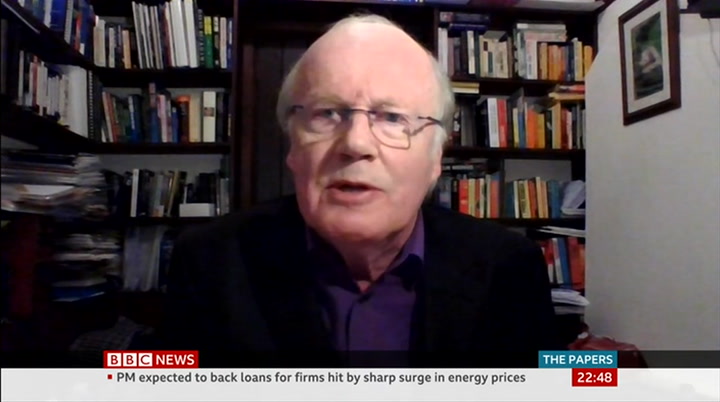 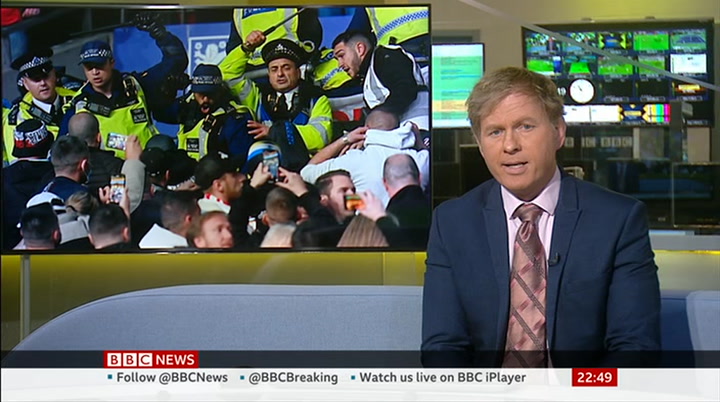 wembley stadium as england hosted hungary and a world cup qualifier running out that the other home nations result isjoe wilson. england versus hungary at wembley, one team taking the need. in the crowd one banner symbolising objection to an active antiracism. early in the game spectators and the hungarian section clashed with police. this was a reaction they say after they arrested a man for racially aggravated abuse towards a steward. it was the backdrop. it is the context. on the page there was a penalty for hungry given for this challenge by luke shaw from the height of the foot with enough and england were behind. well after the plane selling of their qualifying doubt they had to respond. reaction from john stones, i—i doubt they had to respond. reaction from john stones, 1—1 at half—time. stones came close to winning it, england posed by draw will require analysis can what happened with the
10:51 pm 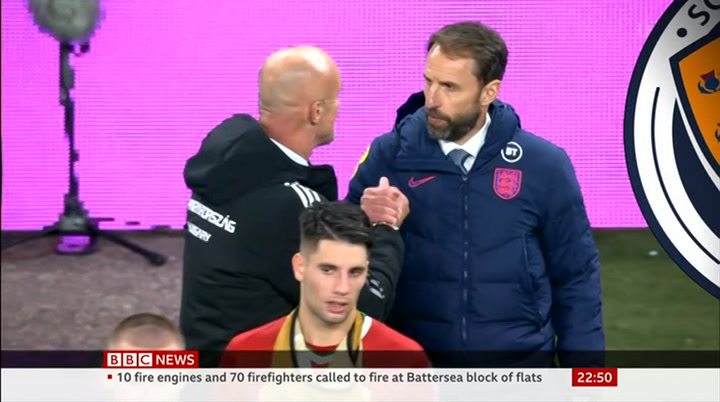 crowd will come say the fa, be investigated. 200 miles north of home scotland and their followers knew the reputation of the faroe islands, the population of 50,000 almost 1—0 up here. craig gordon in gold. scotland's position from other optimism demanded a win, there were four minutes left, there was lyndon. one goal was as good as ten. qualifying ambition sustained. northern ireland's focus lies on tournaments beyond 2022, they lead in bulgaria and lost 2—1. more experience for challenges to come. announcing her squad today england head coach serena wiegman has spoken of her excitement of the women's team playing their first competitive game at wembley this month, one of two world cup qualifiers coming up. they play northern ireland there on the 23rd of october before travelling to latvia three days later.
10:52 pm 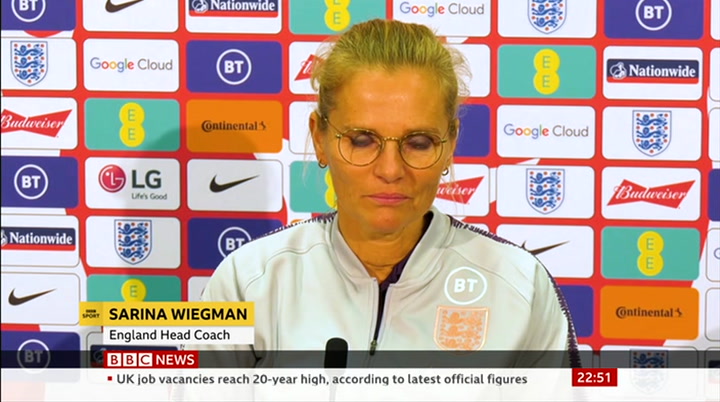 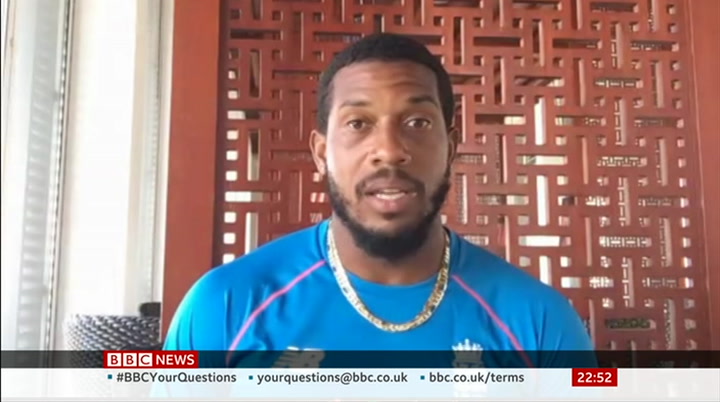 and everyone involved in the squad here is fully focused on the task at hand. now to snooker where three time defending champion judd trump has eased into the second round of the northern ireland open without his opponent scoring a point. trump won all four frames against china's gao yang who couldn't get a footing at the table in belfast, and the englishman will now play another chinese player, lu ning, for a place in the last 16. olympic and european champion katie archibald will headline a 19 strong gb squad at the up coming track cycling world championships. having collected three golds at the last week's european championships and gold in the maddison at the tokyo olympics she heads up the team in roubaix in france. the 27—year—old will be joined by fellow olympic silver medallists neah evans and josie knight in the women's endurance squad, while academy riders megan barker and ella barnwell make their world debuts. discussions will take place over the viability of developing a women's british and irish lions team. england and harlequins prop shaunagh brown
10:54 pm 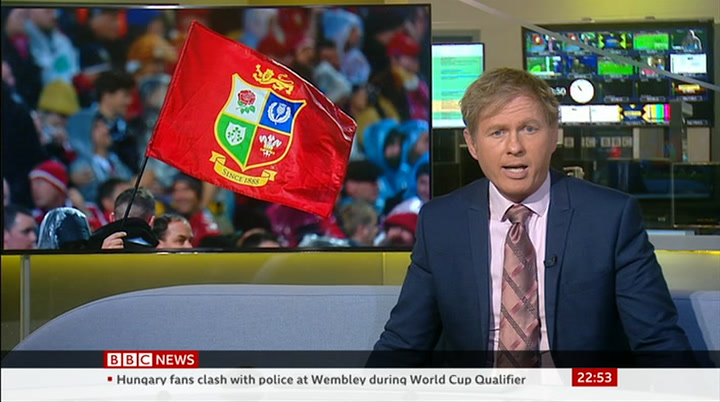 will form part of a 13 member panel to be chaired by the former lion ieuan evans. the board will assess the financial viability, strength of opposition and scheduling, in weighing up the merits of starting a women's equivalent to the men's side that has toured since 1888. the nfl has confirmed that dusseldorf, frankfurt and munich are the three german cities in talks to stage regular season games. the move is part of a bid to expand its international operation into mainland europe. germany willjoin the uk, which has successfully hosted games in london since 2007. the league is due to play its 30th game in the capital on sunday when the jacksonville jaguars face the miami dolphins at tottenham hotspur stadium. the powers that be in golf are proposing to limit the distance of drives, by shortening the length of clubs used. any club, other than a putter, can be a maximum 48 inches in length, but this would be reduced to 46 inches under planned new rules. at the recent ryder cup, the american bryson dechambeau
10:55 pm 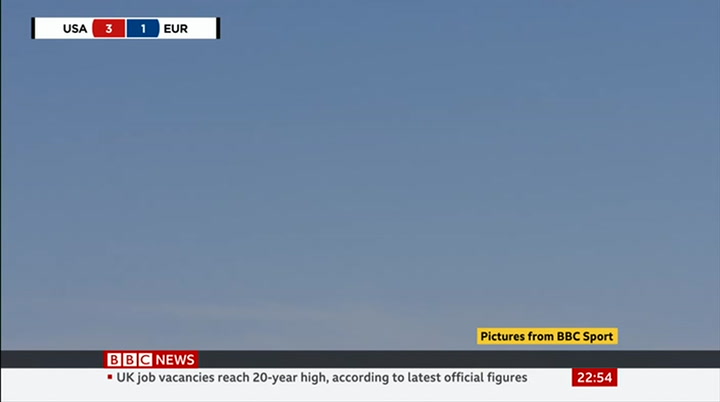 smashed a drive 417 yards to leave a 72 yard second shot at the par five fifth hole at whistling straits. more on that and all of the world cup qualifying action you can head to the bbc sport website. and that's all the sport for now. hello. there were some bright spots on tuesday. some of us got to see a bit of sunshine. but for many places, extensive cloud was the main weather feature, spilling down from the northwest, thick enough at times to produce some spots of rain and drizzle. and wednesday is looking like a very similar day. it will be mostly but not completely dry, often but not completely cloudy. where the cloud has broken, it is going to be quite a chilly start to the day, but most areas beginning with a lot of cloud, some mist and murk, some spots of rain and drizzle. now, through the day,
10:56 pm 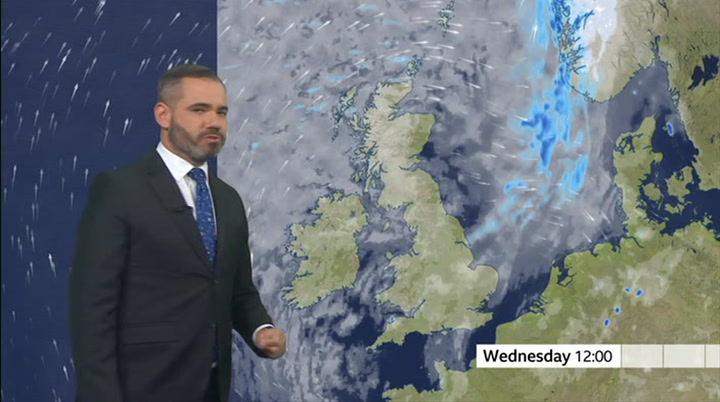 i am hopeful that cloud will break a little bit. eastern scotland should see some sunny spells. parts of northern ireland, england and wales will see the cloud thinning and breaking to reveal some brighter interludes. top temperatures between 14 and 17 degrees, light winds down towards the south, but it will be quite easy further north. through wednesday night into thursday, this cloud continues to feed in with some mist and hill fog, some spots of rain and temperatures of 9 to 11 degrees. some more persistent rain, though, beginning to develop in the north of scotland, and that's the first sign of a change. this weather front dropping into the picture during thursday will bring some outbreaks of rain southwards across scotland, that rain particularly heavy and persistent in the northwest highlands, some of that rain getting into northern ireland later in the day accompanied by a strong wind and a wind that will change direction and will start to come down from the north, bringing the first hint of some colder air into northern scotland. further south, england and wales mainly dry, often cloudy. once again, 16 or 17 degrees.
10:57 pm 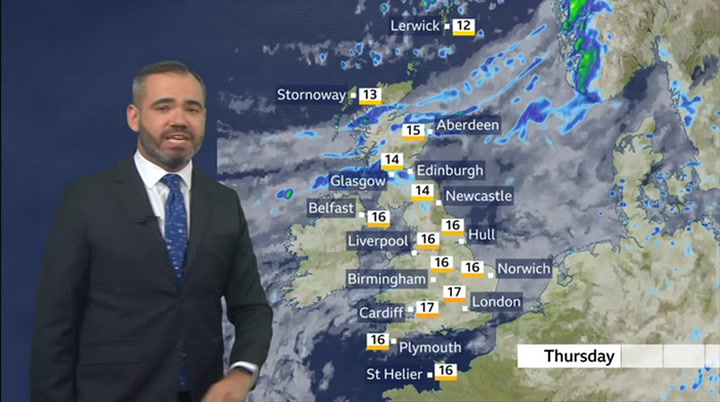 but as we move through thursday night into friday, that weather front will make progress southwards. you can tell from the blue triangles that this is a cold front. that means it is introducing colder air, the blue shades spreading southwards across the chart for friday. across the northern half of the uk, friday is likely to begin with a touch of frost, and it certainly will feel chillier. but what the front is also doing is it's clearing a lot of the cloud away, so there will be more in the way of sunshine. 15 or 16 degrees down towards the south, but further north — look at that — just 9 in aberdeen. but that colder spell won't last all that long. milder conditions will return from the west during the weekend. with that, we'll start to see some outbreaks of rain.
10:58 pm 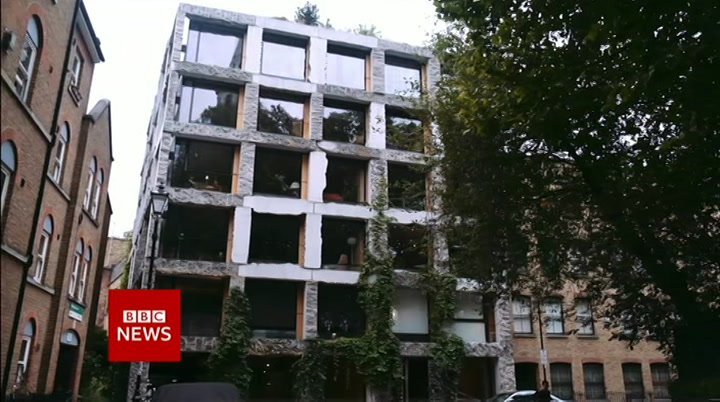 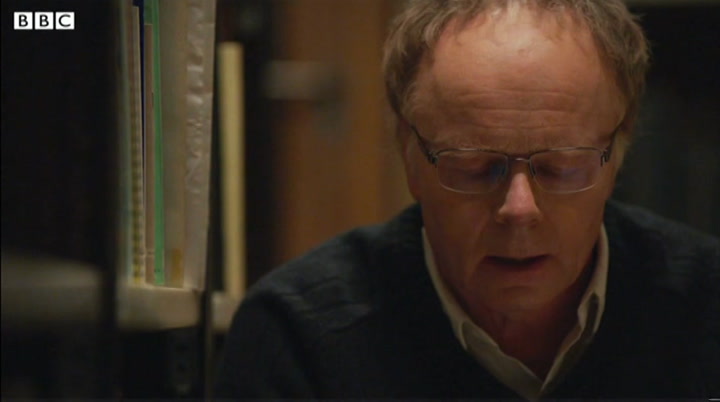 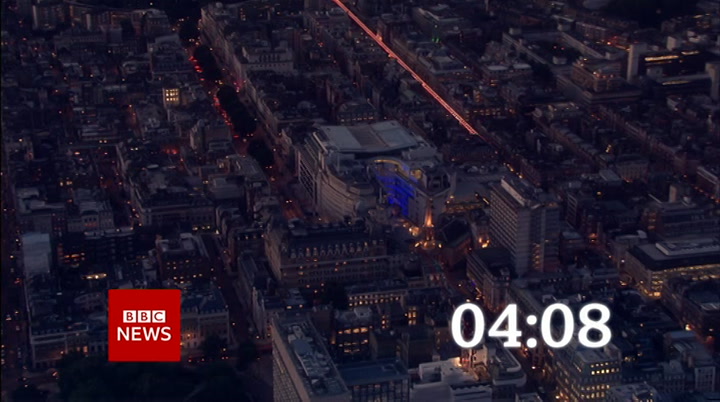 welcome to newsday, reporting live from singapore, i'm mariko oi. the headlines... a damning report on the uk's handling of the covid pandemic calling it one of the worst national public health failures ever. world leaders pledge to help the afghan people with offers of aid at a virtual summit of g 20 leaders but stress it doesn't mean they recognise the taliban. this is a make or break moment. if we do not act and help afghans weather the storm and do it soon not only they but all the world will pay a heavy price. a grisly conclusion to a story that captivated the world.
left
right
Borrow Program
tv