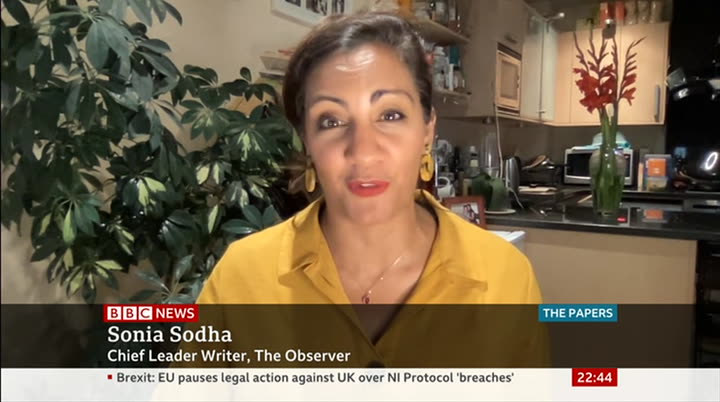 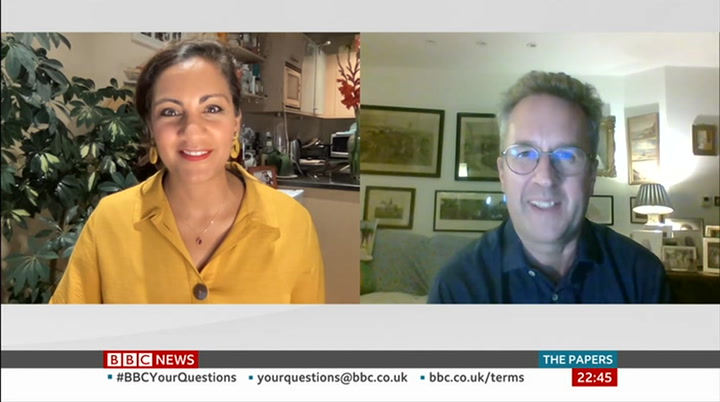 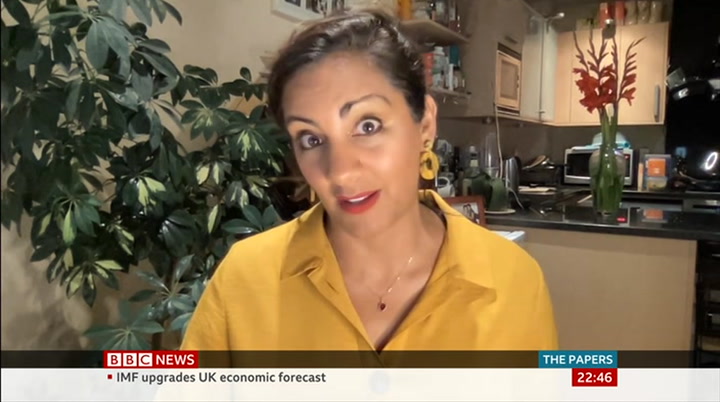 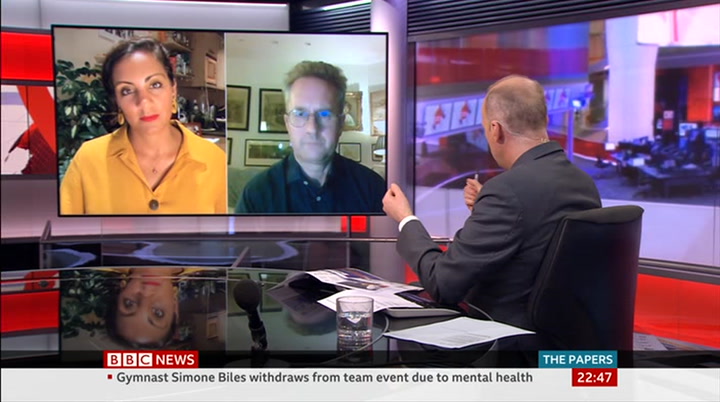 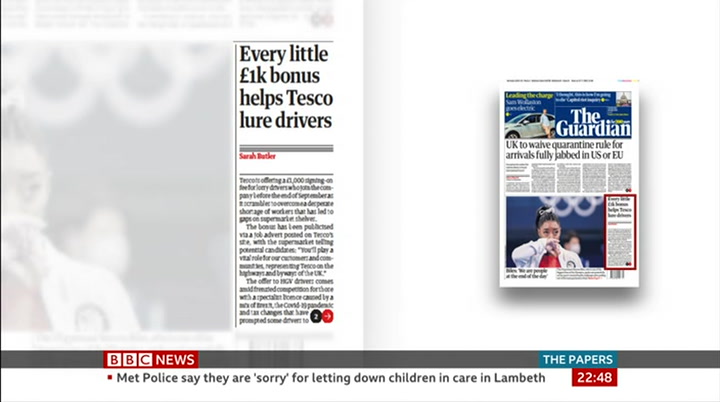 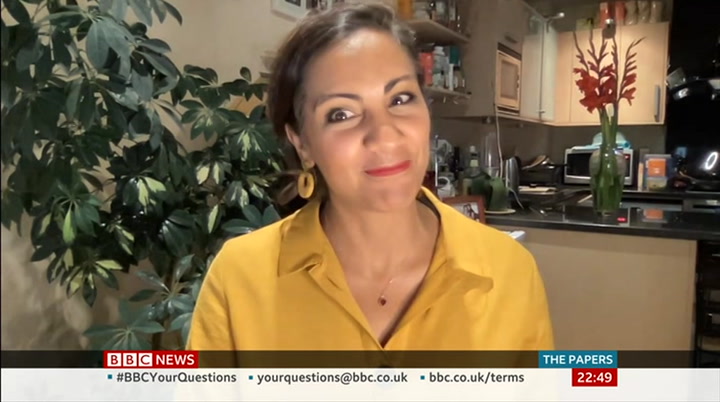 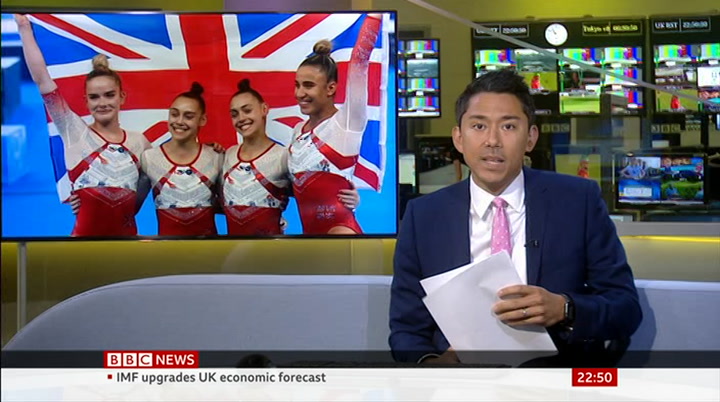 most of the drama on day four came at the ariake gymnastics centre. it provided great britain with a historic medal and also could well have delivered one of the stories of tokyo 2020. team gb won bronze in the women's team final. it's a first medal since 1928 in that event. alice kinsella, amlie morgan, and twin sistersjennifer and jessica gadirova. jessica with this vault that helped secure a dramatic bronze after italy made a series of mistakes in their final discipline. so, a historic moment for team gb in the gymnastics there, but there were a lot of questions surrounding one of the games' biggest stars, simone biles. our reporter sarah mulkerrins is in tokyo. sarah, tell us a bit more about what happened to the us gymnast? good morning from tokyo. it was
10:52 pm 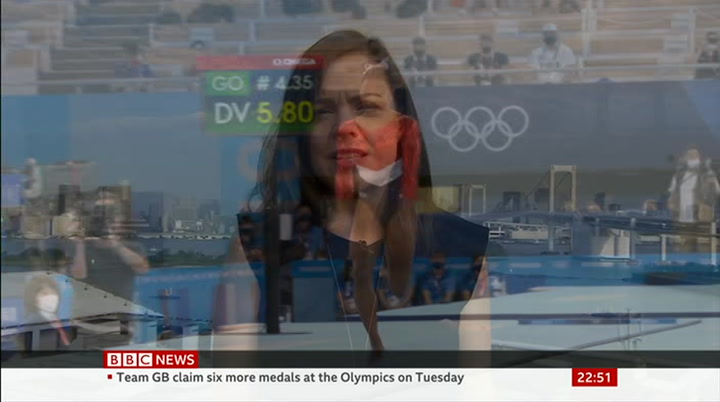 really amazing as all eyes were on the american superstar simone biles. she was going in that team event in the gymnastics. she did vault as the first piece of apparatus she was doing and was unhappy with it. afterwards she left the arena for a while and we were wondering what was going on. she did reappear and did seem to have her armed guards on what suggesting she would take part in the next event but however we send out a statement from the us gymnastics saying she would not compete in the rest of the event. now she has been afterwards since then, saying she needed to protect her mental health and she did not quite feel at the races within her performance and the fall and wanted to protect yourself and i think it's a really interesting discussion point for sports and athletes of the moment because we are so used to hearing about athletes getting their physical injuries but this was something that the mobile said is more prevalent in sport now and that she really wanted to protect her mind and it was important to remember that they may be superstar
10:53 pm 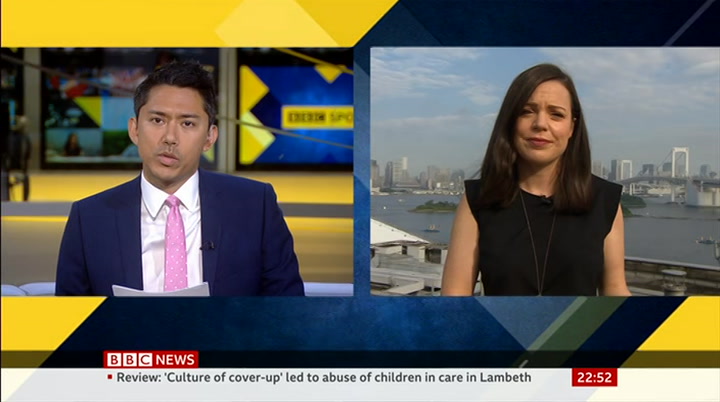 athletes with that they are people athletes with that they are people at the end of the day. from one star to another, and a huge upset for the hosts, the face of tokyo 2020, naomi osaka, knocked out of the tennis. absolutely, and it was naomi osaka as well one of people we have seen in the will to sport talk about mental health issues recently. this was her reappearance in competitive tennis since withdrawing from the french open a couple of months ago. talking about mental health and she had looked good in the first two rounds, pretty dominant performances there but however yesterday in that matchup sheet was uncharacteristic in the amount of errors that work on display so we are a real shock exit for naomi osaka. she said afterwards that perhaps she was feeling the pressure. she's never been to an olympics before and perhaps maybe there was something on the break away from tennis but she says she has had breaks before and she has re—emerged to find so really interesting when he think that she is one of the games and let the
10:54 pm 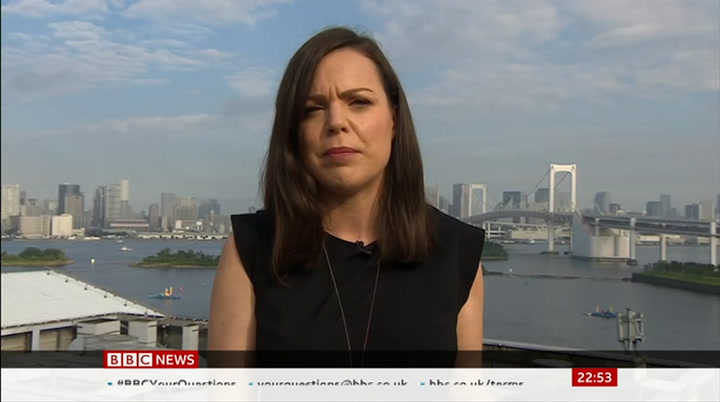 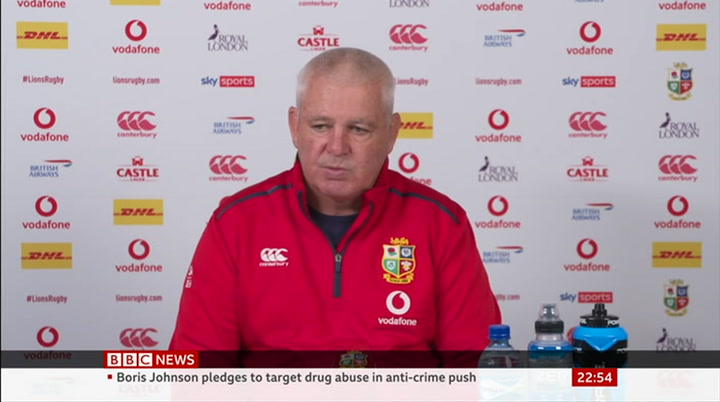 and them playing that first game that they'll get better as well, so it'sjust that they'll get better as well, so it's just as well, so it's just trying to get that balance with what we've achieved. not making too many changes, butjust picking what we think is the best team that can do a job on said day. manchester united have continued their summer spending spree by signing real madrid defender raphael varane. an initialfee of around £34 million pounds has been agreed, potentially rising to 42 million with add—ons. varane won four champions league titles with real along with the world cup with france in 2018. united secured the signing of jadon sancho last week. toby alderweireld has completed a transfer from tottenham hotspur to qatar stars league side al—duhail. the belgium international had two years remaining on his contract, but he'll make the move to the middle east after spending six years at spurs, where he made over 200 appearances. in the hundred men's tournament tonight, jonny bairstow hit 72 off just 39 balls as his welsh fire side beat southern brave by 18 runs in cardiff.
10:56 pm 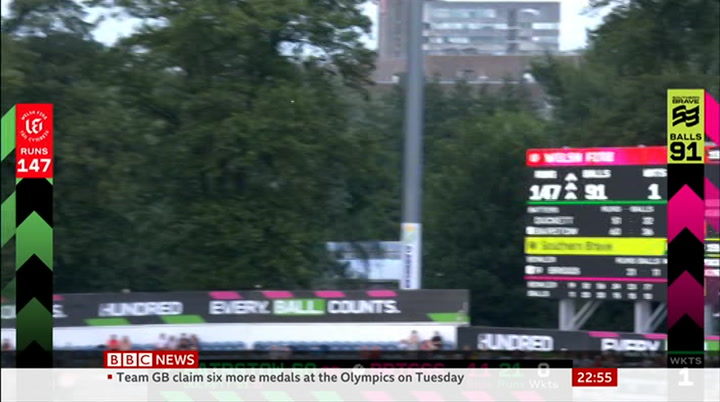 he and ben duckett put on a partnership of 116 in their winning total of 165—4. southern brave could only reach 147 off their 100 balls. earlier, in the women's competition, the result went the other way, with the southern brave comfortably beating the welsh fire. after being set 111 to win, a superb knock from smriti mandhana saw them coast to victory with 16 balls to spare. that's all the sport for now. you can find more on all those stories on the bbc sport website. that's bbc.co.uk/sport. hello. with low pressure right across the uk, there were more heavy, even torrential thundery downpours around on tuesday. one storm captured on camera by one of our weather watchers in belfast. here's the area of low pressure. now, later in the week, it will move away, and then the showers are going to ease. but as it exits the scene,
10:57 pm 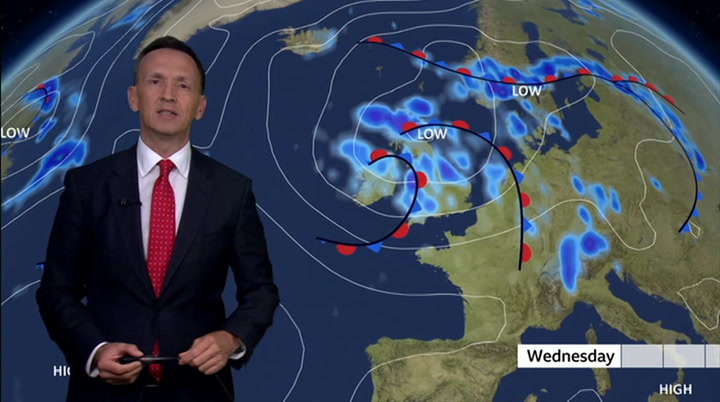 it draws in some cooler air as we move from july into august. now, enduring some of the heaviest rain for wednesday will be this part of scotland, with a met office amber warning. ullapool across to elgin, including inverness, where by thursday morning, rain totals may be approaching 100 millimetres in the wettest spots, bringing the likelihood of flooding and travel disruption. it's not the only area, though, that's going to see some heavy rain during wednesday. more widely across parts of scotland and northern england, there'll be some areas of heavy rain to begin the day. notice this area of rain in scotland. this is the one that becomes slow—moving across some central and northern areas during the day with that prolonged rainfall. elsewhere, it's a case of, yes, there'll be some sunshine around, but look at the showers getting going for the afternoon. some of these heavy, thundery, with hail, brightness in between. a breezier day for much of england and wales, and the winds gusty around these showers, though they may perhaps move through rather more quickly than they've been inclined to do
10:58 pm 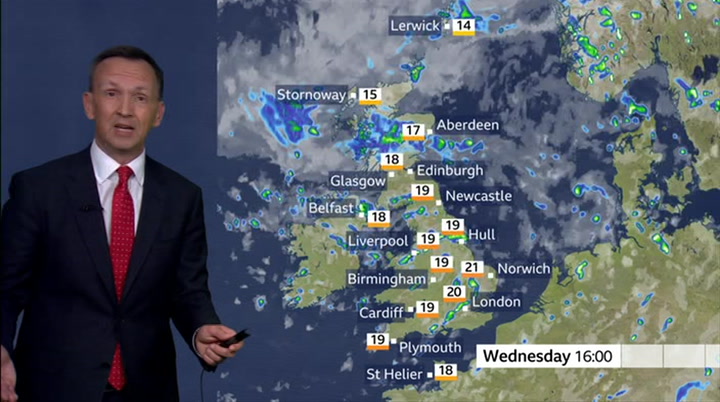 in recent days. and as for your temperatures, well, many of us just in the teens. parts of eastern england up to around 20, maybe 21 degrees celsius. overnight and into thursday, the worst of these downpours will slowly ease, and the heaviest of the rain in scotland will also begin to ease going into thursday morning. but problems with flooding and disruption may continue even beyond the end of the heaviest rainfall. and temperatures are a bit lower as thursday starts. back to this area of low pressure, notice its journey away from us is under way during thursday. it's around its back edge as it moves away. we get the cooler air moving in, and still bands of showers around as well, though maybe not as frequent as they've been recently. and there will still be a bit of sunshine to be had, but catch a shower, it could still be heavy and thundery as it moves through on thursday. again, for the most part, temperatures just into the high teens, a few spots reaching 20, maybe 21 degrees. temperatures aren't any higher at the weekend, but what is clear by then, there will be fewer showers around and what showers there are will be less intense.
10:59 pm 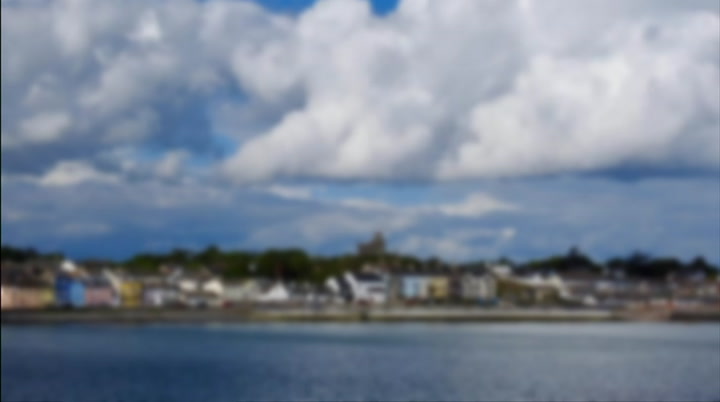 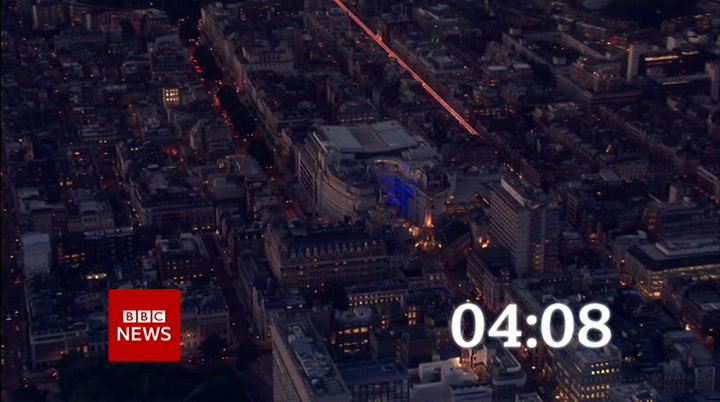 welcome to newsday, reporting live from singapore, i'm karishma vaswani. the headlines. a shock withdrawal at the olympics. simone biles explains why she left the floor in tokyo — the latest athlete to put mental health first. indonesia reports a record number of covid deaths — more than 2000 people died in the last 2a hours — we have a special report. the ambulances that carry the bodies keep coming one after the other. the workers here could bury more than 200 bodies in a day. powerful testimony in washington from the police who tried to defend the capitol onjanuary the sixth — they tell the inquiry their stories of struggle — and survival.
left
right
Borrow Program
tv