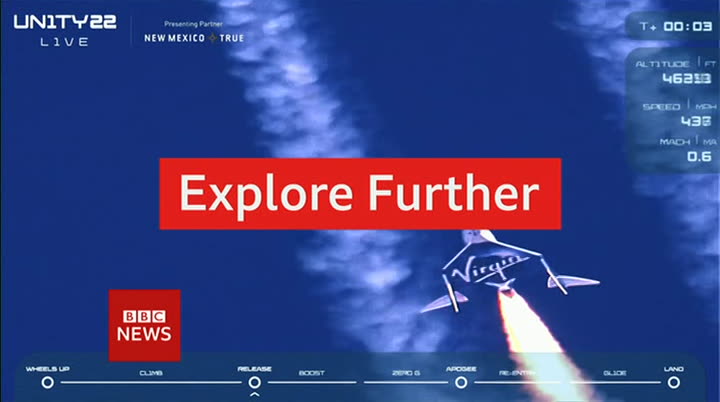 hello, this is bbc news with lukwesa burak. the headlines. at the tokyo olympics, the defending champion, team gb's adam peaty, is through to the semifinal of the 100—metres breaststroke, while max whitlock advanced to the final of the pommel horse — the event in which he won gold four years ago. a daily testing scheme allowing key workers to avoid covid self—isolation in england has been expanded. essential services have been disrupted after hundreds of thousands of people have come into contact with infected people. a 11—year—old girl who sparked a nationwide search when she went missing in england has been found safe and well. fatuma kadir left
7:31 pm 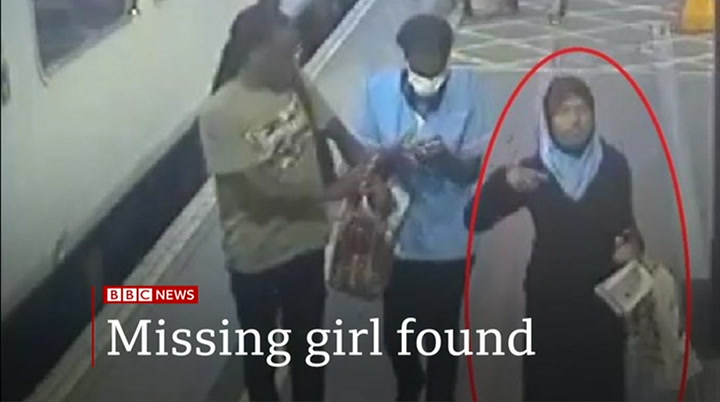 her home in bolton, greater manchester, on thursday. afghanistan has declared a night—time curfew in almost the entire country in an attempt to stop taliban infiltration into urban areas. the government said no—one is allowed to move around between ten at night and four in the morning. army explosives experts are preparing to detonate a second world war bomb which was found during the construction of a new housing estate in east yorkshire. part of the m62 has had to be shut near goole for a controlled explosion to be carried out. sportsday is coming up at 7.45, but now on bbc news, it's time for the film review with mark kermode.
7:32 pm 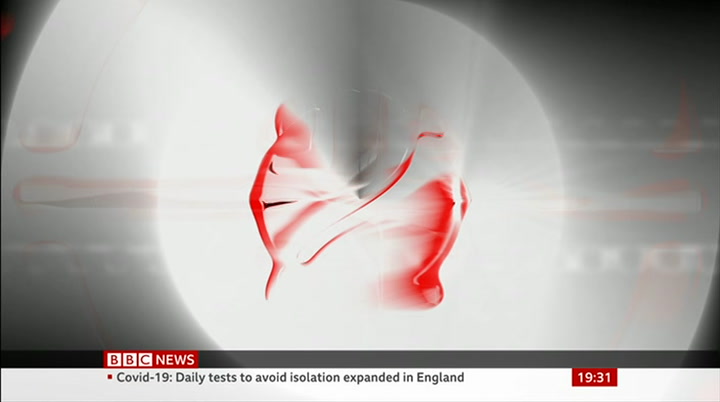 hello and welcome to the film review with me, mark kermode, rounding up the best new movies available for viewing in cinemas and in the home. tuesday, january 1st, 1856. with little pride and less hope, we begin the new year. in the world to come, us—based norwegian film—maker mona fastvold captures an intense romantic relationship set against the bleak, unforgiving backdrop of 19th—century frontier life. when the day is done, my mind turns to her, and i think... "why are we to be separated?" adapted from a story byjim shepard, who shares screenwriting
7:33 pm 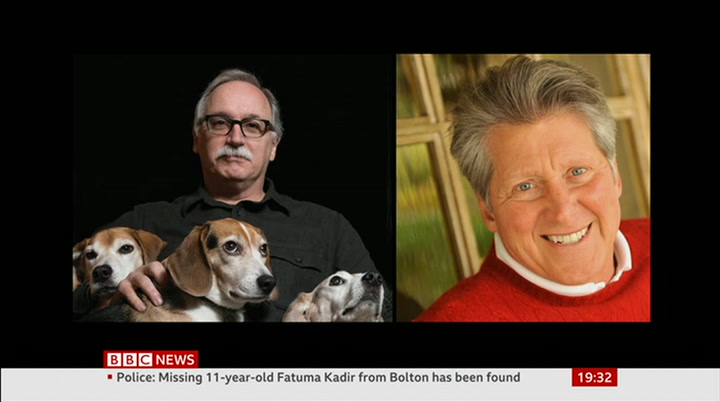 credits with ron hansen, the film follows the fortunes — or misfortunes — of two couples living on remote farms in schoharie county. it's a tough existence, with narrator abigail, played by katherine waterston, recording the daily grind in her diary — a monotone document of a life filled with hardship, tinged with grief, and notably lacking in love. until, that is, abigail's neighbour, tallie, played by vanessa kirby, arrives on her doorstep, stirring long—dormant emotions. soon, the pair have become inseparable — to the disapproval of their husbands, both of whom seem to swing between anger and disappointment at the respective marriages. the winner of the queer lion at the 2020 venice film festival, the world to come has been called a female version of brokeback mountain — although in truth, the two films have very little in common. a closer comparison would be with francis lee's ammonite — another film about love in a harsh climate which offered much to admire, if little to enjoy. focusing on the suffocating strictures of a society
7:34 pm 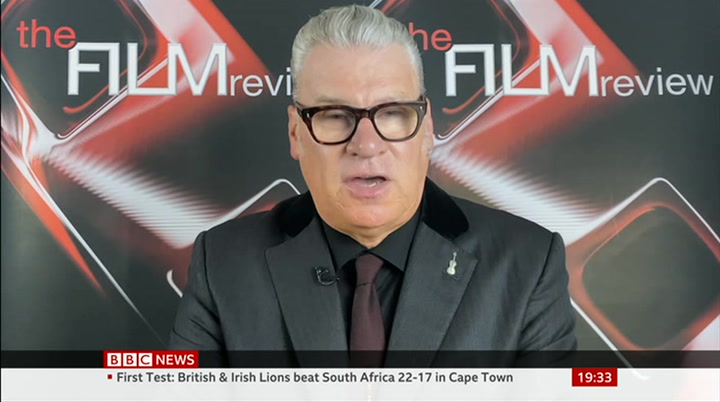 in which women have little or no agency, fastvold conjures an authentic air of misery, alleviated only briefly by stolen moments of affection quickly snatched away by the dour, patriarchal cloud of tragedy and heartbreak. my daughter, nellie, would've been five today. 0h. how did she pass? there's no doubting the conviction of the performances — with kirby, who earned an oscar nomination for pieces of a woman, continuing to cement her reputation as one of the finest screen actors of her generation. god puts heavy stones in our path. it's up to us to step over them. plaudits, too, to cinematographer andre chemetoff, whose imposing views of romanian mountains double efficiently for upstate new york, and british composer daniel blumberg, whose music captures the discordant mood shifts with gut—wrenching aplomb. stones are what the fortunate receive. my mother's mother was born in 1780, right here in schoharie county.
7:35 pm 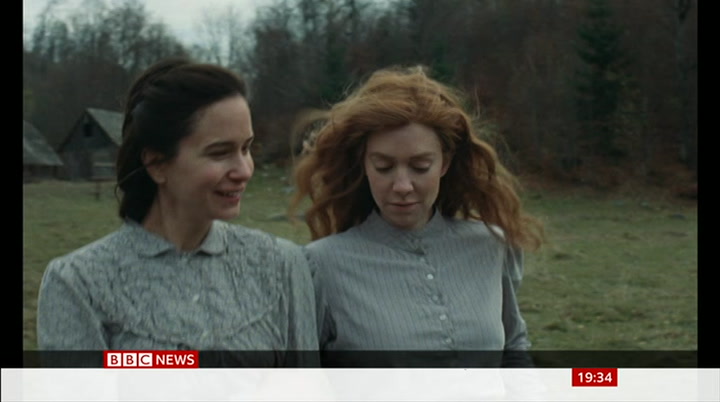 the result is a film that offers what appears to be an honest and accurate depiction of hard times, but in which any sense of hope orjoy lies not in this world, but in the world to come. it's in cinemas now. it's very important... he doesn't appreciate you touching the glass. and i don't appreciate his manner. senor? we don't need this. 0h. he's gotta bejoking. oh, gosh! ok, no need, senor, no need... i am an american citizen, senor, please! at the other end of the spectrum in terms of mood, heft, and, well, pretty much everything, actually, is off the rails — a daft bill kenwright—produced romp boasting a cheesy script, a star—studded cast,
7:36 pm 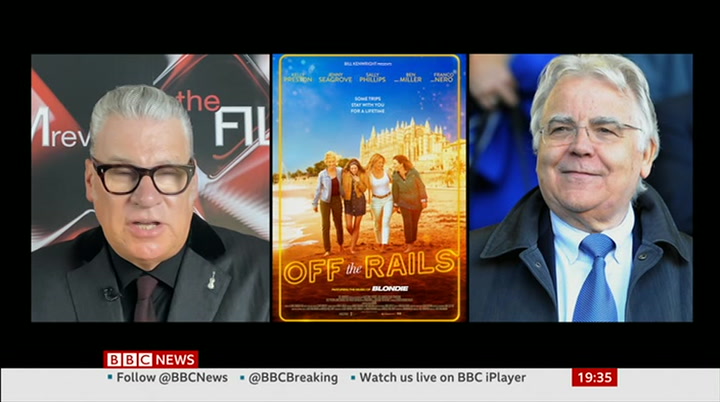 and a jukebox soundtrack of clumsily—slapped—on blondie hits. jenny seagrove, sally phillips, and kelly preston — in herfinalfilm role — are the threesome reliving a youthful dream to see the lights in parma cathedral. joining them is elizabeth dormer—phillips' maddie, daughter of the recently—deceased anna, whose dying wish was for them all to make this last—minute pilgrimage. broad strokes interrailing japes ensue, as the group pinball across france, italy and spain, losing their money, passports, and minds as they deal with births, deaths, and marriages. the internet scares me. you could be talking to anyone. i mean, i could be- a serial killer — i'm not! if you stand this next is something like shirley valentine — in which a middle—aged housewife finds a new lease on life while holidaying in greece — then off the rails really pales by comparison. there's little of the wit, grit, or bittersweet humour of that willy russell—scripted gem in this ragbag of romantic cliches and cut—and—paste pop songs — which, for all its eye—catching
7:37 pm 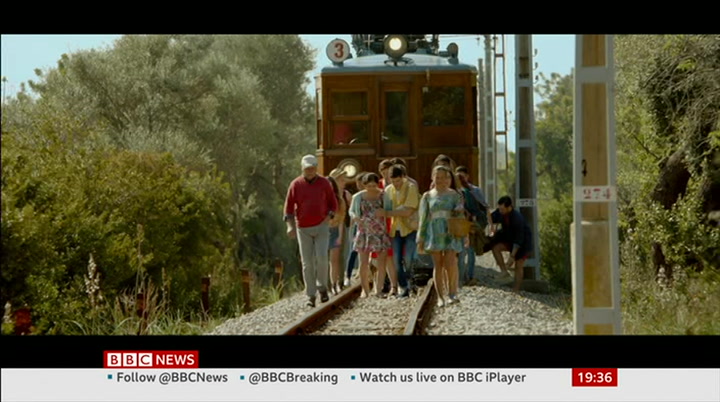 locations, feels more like a tv movie than a feature. to be clear, off the rails won't be troubling the oscars, or even the baftas. but i'd be lying if i claimed that this didn't touch my dark heart at all. not least because it's pretty much impossible to spend 90 minutes in the company of this very likeable cast — which also includes small roles for ben miller and franco nero — without it raising a chuckle or a tear. and, i confess to both. moreover, there's something reassuringly shonky about off the rails that distances it from the obnoxious excesses of, for example, sex and the city 2 — a slick hollywood blockbuster that i personally found more distasteful than the human centipede. laughter. off the rails is in cinemas now.
7:38 pm 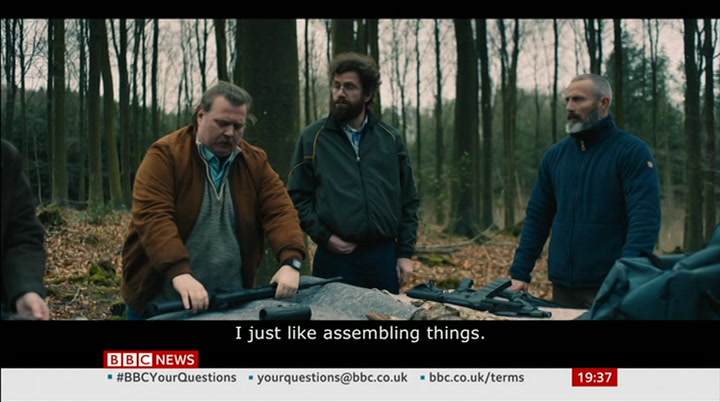 a couple of weeks ago, i declared mads mikkelsen�*s performance in the oscar—winning another round to be the high point in a screen career that ranges from playing a bond villain in casino royale, to starring in the oscar—nominated danish historical drama a royal affair, and winning a cannes best actor award for his lead role in the hunt, not to mention breathing new life into the cannibalistic dr lecter in tvs hannibal. now, mikkelsen further demonstrates his range in riders ofjustice — a totally unhinged offering from writer—director anders thomasjensen, whose extensive credits include scripting susanne bier�*s oscar—winner in a better world. mikkelsen plays markus, a gruff soldier with a crew cut and an unruly beard whose wife, emma, is killed in a train wreck after a fellow passenger gives up his seat. it looks like the set up for a grief—stricken drama about morning and loss, with markus�*s teenage daughter, about mourning and loss,
7:39 pm 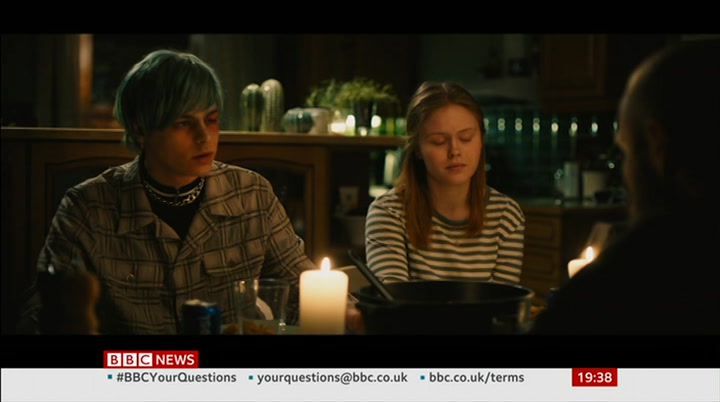 with markus�*s teenage daughter, mathilde, who was on the train with her mum, struggling to find comfort or common ground with her dad. but instead, the film turns into something completely different — first, a paranoid conspiracy thriller as the disconsolate algorithm expert who fatally gave emma his seat convinces markus that his wife's death on the same train as a biker gang trial witness could not have been a coincidence — and then, as an increasingly—crazed black comedy. as markus and three misfit geeks wreak murderous vengeance on the supposed of killers while pretending, for the sake of mathilde, to be experimental grief therapists. if that sounds completely nuts, it's because, well, it's completely nuts, veering between action, drama, socio—political satire, and three stooges slapstick comedy not only between scenes, but sometimes right in the middle of a sentence.
7:40 pm 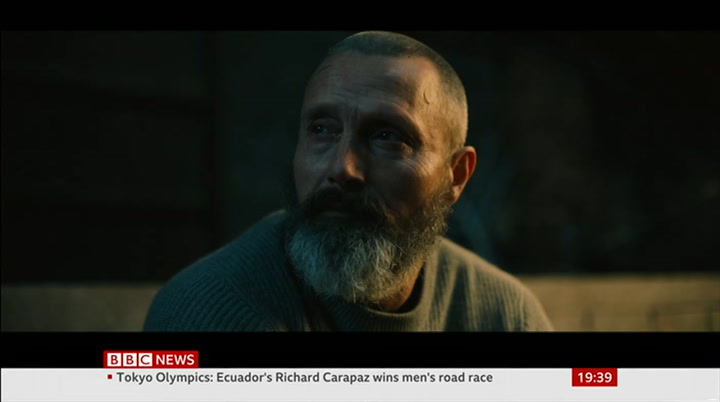 mikkelsen somehow manages to keep a straight face, which perversely only makes the sense of disorientation worse — or better, depending on your perspective. none of which is to suggest that riders ofjustice, which opens and closes with a fatalistic joke about bicycle thieves, isn't oddly entertaining fair. i kind of enjoyed its tragicomic absurdity, even if it does suggest that the danish sense of humour is even more morbidly twisted than we may so far have imagined. riders ofjustice is in cinemas now. of the three ivory coast submissions for the foreign language film oscar over the years, two have been by writer director philippe lacote — 2014's run, and night of the kings, which was shortlisted for best international feature at the 93rd academy awards. a shape—shifting tale of incarceration and emancipation, it may have missed out on an oscar nomination — but this vivid,
7:41 pm 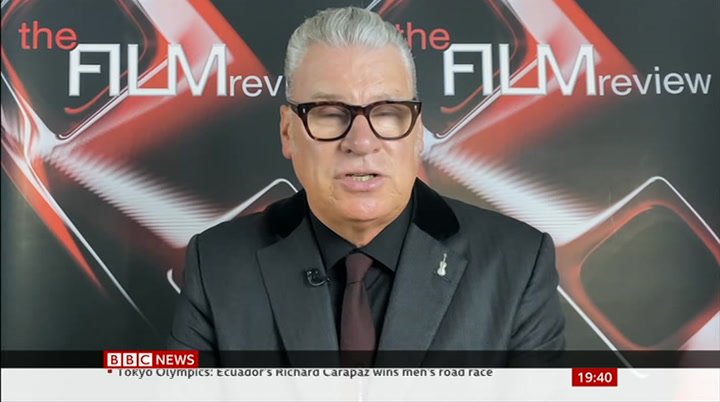 genre—fluid investigation of the alchemical art of storytelling definitely hits the mark. it's set in the notorious maca prison, described by one keeper as the only reason in the world run by an inmate. that inmate is blackbeard, an ailing godfather figure played by steve tientcheu, who made a lasting impression in the urban drama les miserables. nearing the end of his reign, blackbeard declares a new arrival to be roman, whose role it is to tell stories as if his life depended upon it. what follows is a strange and rather wonderful hybrid of tough prison drama and theatrical performance piece — with mime, dance, poetry, and oral history intertwined
7:42 pm

in a whirling cinematic maelstrom. there's a fable—like element that links night of the kings back to the folkloric tales of 1,000 and one nights — with roman a modern—day scheherazade — and to the oral storytelling traditions of west africa. but lacote�*s cinematic storytelling is all his own, mixing the personal and political in a heady brew that's unlike anything else currently playing in uk cinemas. i'll leave you with news of the french comedy—drama bye bye morons, which picked up a whopping seven awards, including best film at the 46th cesars earlier this year. virginie efira is suze trappet, a woman with little time searching for the child she gave up for adoption. writer—director albert dupontel
7:43 pm

plays the snubbed it operative whose botched suicide attempt misfires with spectacular results. and nicolas marie is the blind archivist who winds up helping the mismatched pair to track her child and clear his name. despite the multiple awards, bye bye morons is fairly lowbrow fare, revealing in a hodgepodge of broad, bureaucratic satire, politically incorrect slapstick, and questionably romanticised views of creepy male—female relationships. or, to put it another way, it's very french. there on the—nose—nods to the films of terry gilliam, who makes a fleeting cameo appearance, while the overcranked zaniness evokes the heyday ofjeunet and caro, albeit without the visual invention. it's fun up to a point, but i remain baffled by the love heaped upon it in its homeland which is unlikely to be replicated here.
7:44 pm 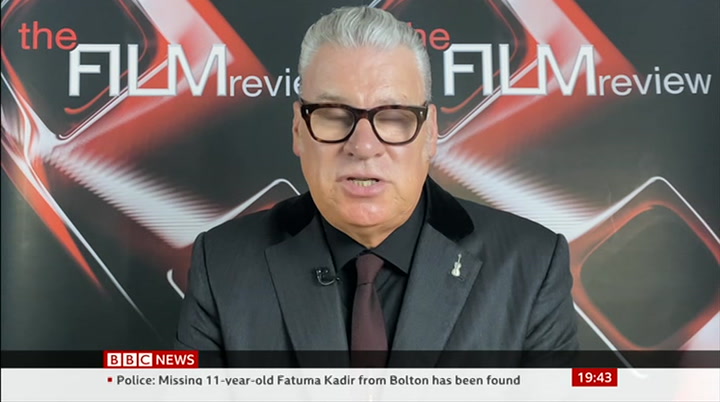 it's in cinemas and on curzon home cinema now. that's it for this week, thanks for watching the film review. stay safe, and i'll see you next week.
7:45 pm 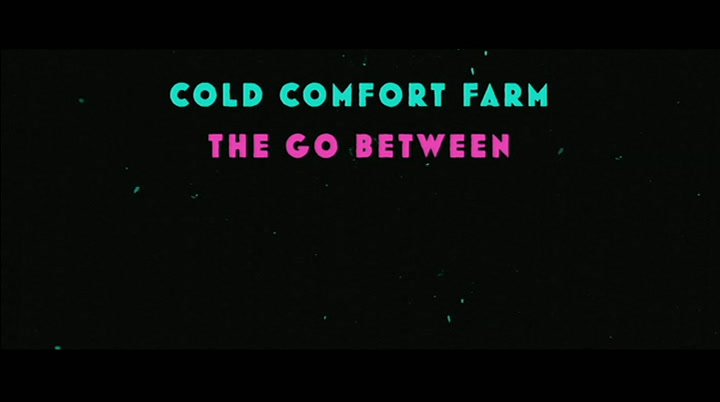 hello, welcome to sportsday. i'm austin halewood. coming up in the programme... they're under way, and it's been a solid start for some of team gb�*s best medal hopes on day one in tokyo. but geraint thomas's quest for another olympic medal disappeared after he crashed out of the men's road race. and away from the olympics, a famous win for the lions. they beat south africa in their first test match in cape town.
left
right
Borrow Program
tv

Mark Kermode gives his unique take on the best and worst of the week's film and DVD releases.