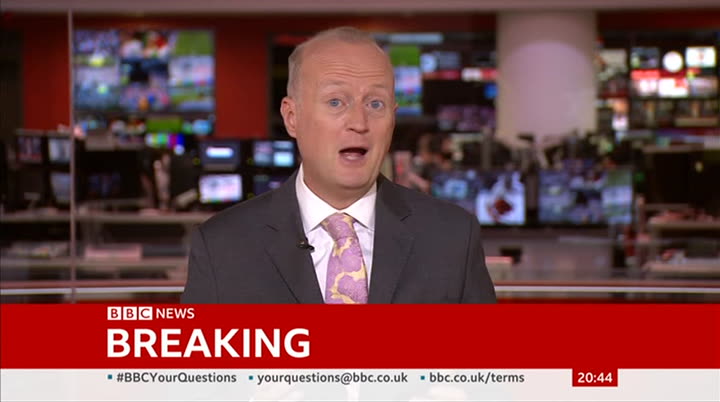 8:36pm, said statement issued at 8:34pm, said there is no indication about how many people, it is described as a small group as people — how you define a small group is obviously a relative term — a small group of people might be 50 people in a state that large is or it might be half a dozen, it's not clear. anyway, at least some of them are still at large in the stadium. the authorities are saying, if you don't have a ticket you will be a ticket you will be objected short of stopping everyone and mounting people show their tickets, obviously, everyone should be in their seats at this time, because at half time, there will be a certain amount of movement, although it is restricted at the moment. you could just be going to the toilet, say, i let my ticket with my partner, whatever. it is obviously a headache for officials. this is the scene in
8:46 pm 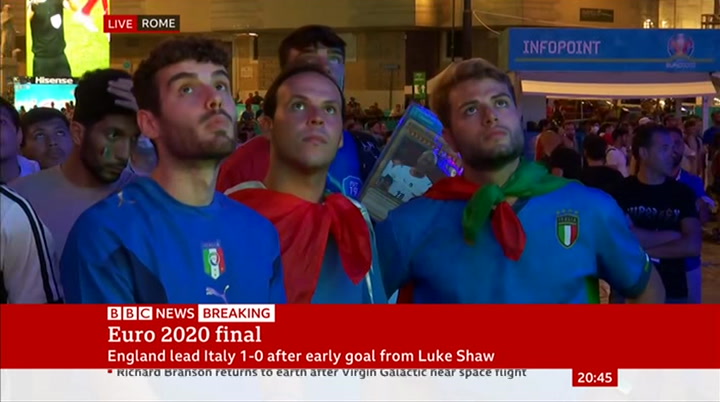 rome, the italian fans have been watching. out there have been that many smiles on the italian faces as i've been watching during this half, though i have only been looking selectively. that was almost a smile! rather durable looking faces earlier, attentive but dour. the game has not gone the way they were to be expected in the first half. there are four minutes of additional time to play, the score is still 1-0. this time to play, the score is still 1—0. this is the scene in trafalgar square, just beyond the column, which is admiral lord nelson, the tiny figure up there in the sky, i wonder what he would make of this. he might not see a victory. that's hope, like the ships, he was wrong. people or spend the afternoon and
8:47 pm 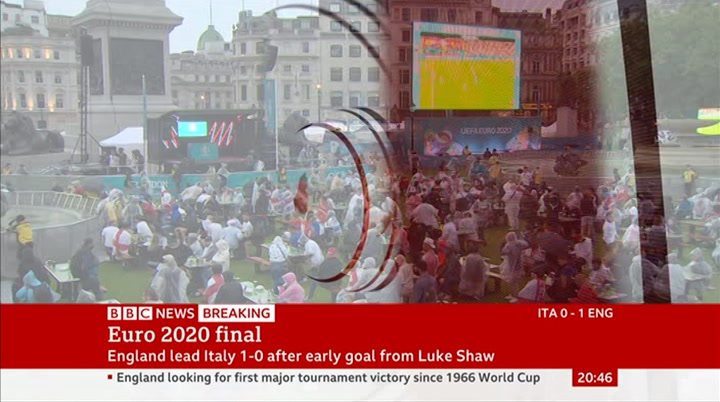 now the evening rather anxiously watching the screens. similar scene in preston, everyone being very well behaved. we had that moment of euphoria with luke shaw's goal two minutes into the first half. what they have seen some very decent football, it's been full of incident and drama. we've got another 45 plus minutes in the second article, never mind if there is extra time and, whisper it, penalties. but at the moment, it's 1—0, so let's have another look at luke shaw's goal, coming at two minutes into the first half. walker is charging past trippier. it's trippier who will cross, and it's luke shaw...! what a birthday present, he's 26 tomorrow. i think the party came
8:48 pm 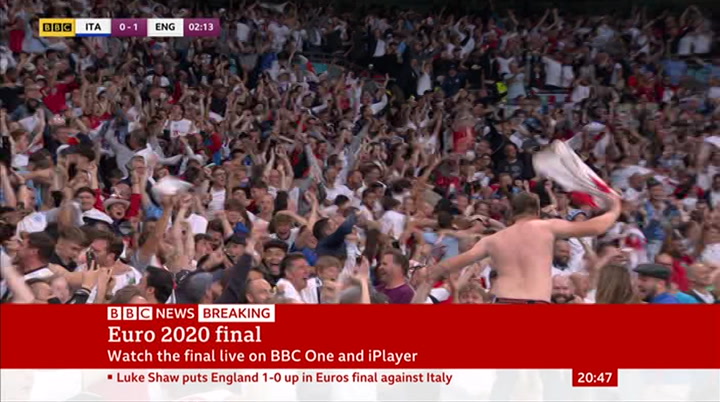 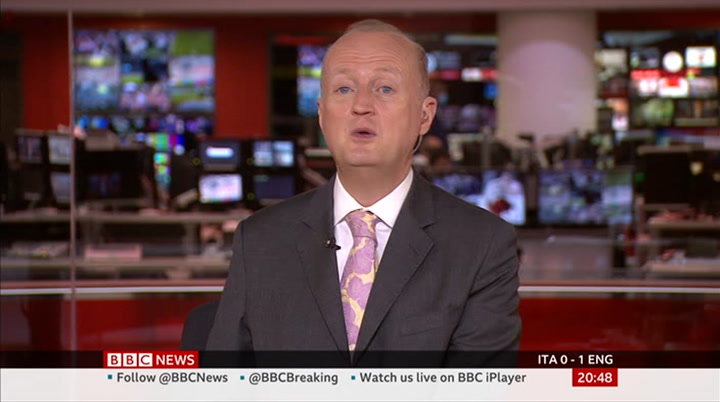 we'll got usedto over the years, not roger federer but novak djokovic, winning his sixth wimbledon final, putting an equal with federer and natal. the italian opponent took him to four sets but the world number one just was too strong. at wimbledon, there are always people we miss. strong look. but now, a first opportunity for matteo berrettini. against him, novak djokovic, the ultimate immovable opponent. but when berrettini raised his game, we heard. oh, it's in! london supporting italy, hours before wembley. 71 minute first set settled in a flash. wow! well, if djokovic was shocked, a bit, he reacted. took the second set 6—4 and let's be clear, he is respected globally as a true sporting great. but djokovic wanted to feel the love on centre, "let's hear you",
8:50 pm 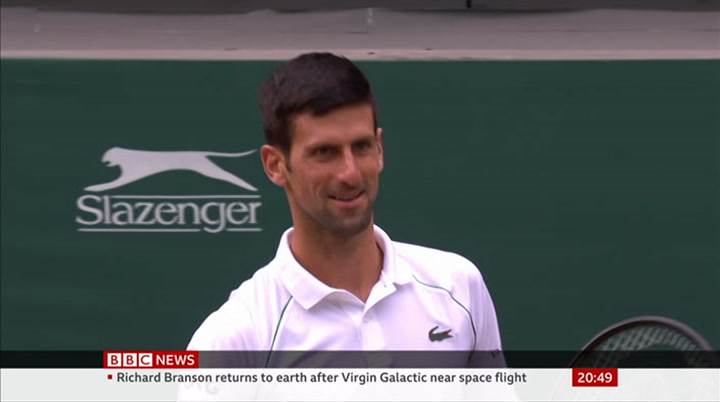 he gestured and then, "read the score". and as berrettini faulted, it was 6—4, it was 2—1. passed three hours went the final. louder grew the noise. "matteo" chanted many. djokovic chased everything. who's winning this point? the world number one. and the break of serve followed. it should be a gripping rally on championship point. it should be a challenge to achieve something momentous. it was. grand slam title number 20. the last ten years has been an incredible journey... ..that is not stopping here. with this, djokovic is now level with federer and nadal and surely they will have been watching. straight to wembley, where it's half—time in the match between england and italy. a wejoinjohn
8:51 pm 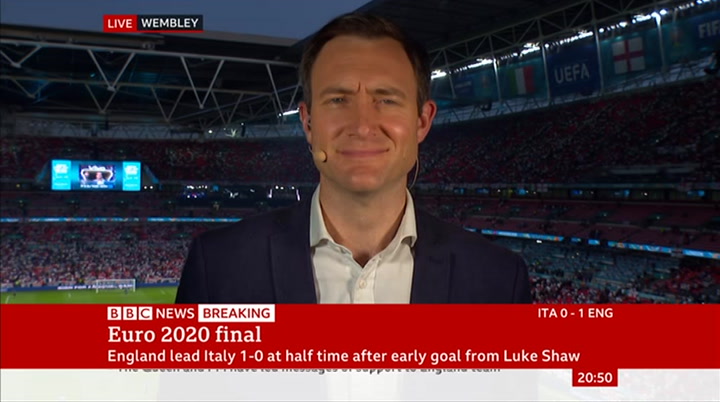 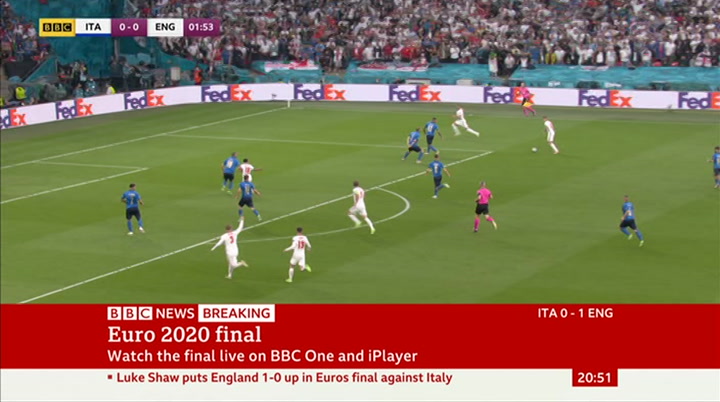 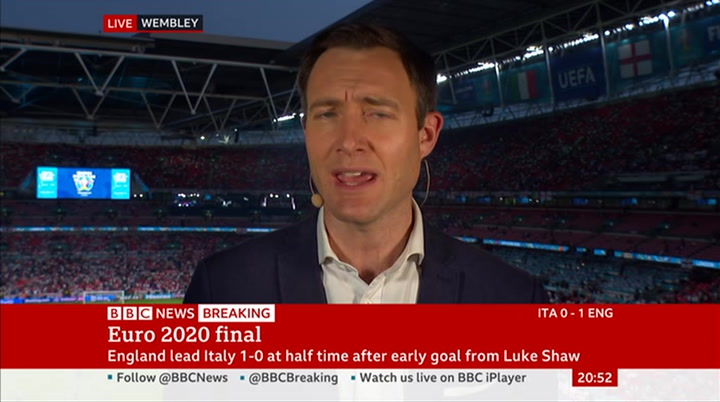 half, they were only left with a few pot shots at times. a lorenzo insigne had a free kick in that first half, federico kayser going closest when he was restricted to a shot from distance. it was his goal in the semifinal against spain, that match finishing 1—1, paving the way for extra time and penalties. federico kayser proving how crucial he is to this attacking line—up from the italian spy has been england in that opening 45 minutes and as the players head off at half—time, gareth southgate will be very keen to keep their feet on the grounds because this is the biggest game in their professional careers, when you consider many of these players have enjoyed success at club level, many winning the champions way, the likes of ben chilwell and mason mount the season but it is a step up playing international football, not least because it is a final for the very
8:54 pm 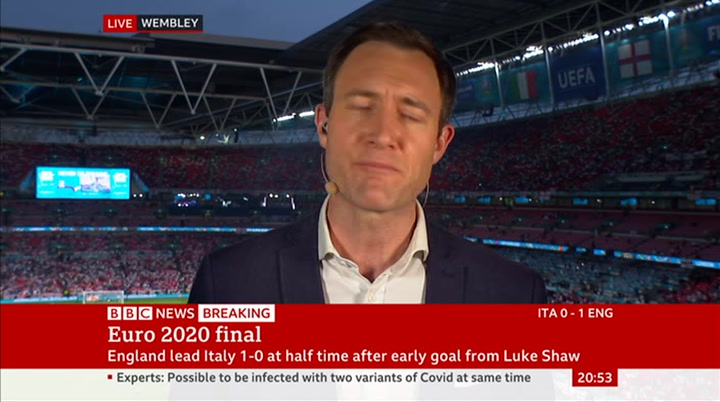 first time. but gareth southgate will be stressing to those players he's not asking for more than they produced already. he was very keen to say that before this huge match, he said, we'll kitty level, it's about maintaining that is, and they turn i'm certainly done that in the opening 45 minutes. roberto mancini will be wondering what he can too, will be wondering what he can too, will he make changes as they head into the spinal 45 minutes? it will be fascinating, these players, can they dare to believe now that this could finally happen? that long wait for a major win at a major tournaments. you go all the way back tournaments. you go all the way back to 1966, when sir bobby moore climbed the stairs here at the old wembley stadium to pick up thejules rimet trophy, that solitary win on the bigger stage back in 1966. you think about the heartache that has followed, no final appearances. the
8:55 pm 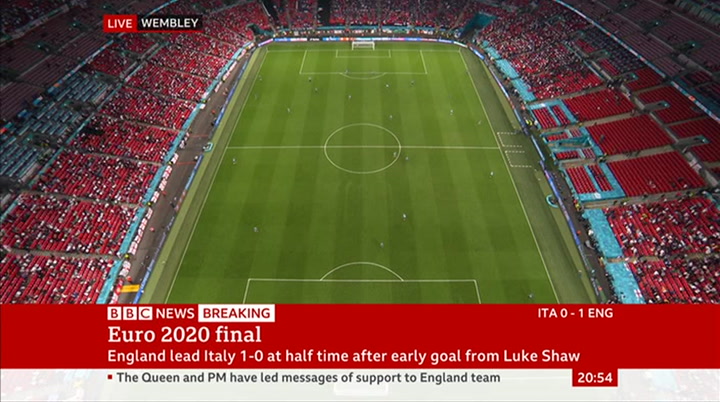 1990 world cup, chris waddle, of course, missing that penalty at italia 90. gareth southgate, we spoke so many about his disappointments as a player and his penalty miss at euro 96 when england were knocked out against germany. but signs of progress, signs are perhaps things were changing when they made it through to the semifinal at the last world cup in 2018. they came through that penalty shoot—out victory against colombia, we've seen them win knockout matches at this tournament already. they won their opening match of the european championship against croatia what seems like an eternity ago. all the steps taking them to this huge moment and now they stand 45 minutes away from emulating those achievements of that 1966 world cup winning side. very few players have enjoyed this occasion, they have tonight and we wait to see whether it will be england climbing the
8:56 pm 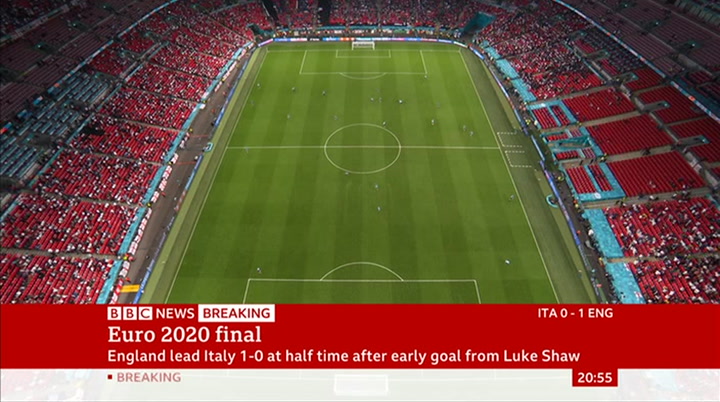 steps later on to lift the european championships for the very first time. you can watch the second half to come, it's on bbc one live tonight, will be following it all from here as well, all direction to come on the bbc news channel a little later on but for now, that is just about it from me, enjoy the match wherever you're watching and we wait to see whether this is the moment that, at long last, england can get over the line in a major tournament. from myself and the team here at wembley, that's all for me, next up on the books is a new channel, it's the weather, bye foot for now. hello there. it looks as though we're to see something a lot more like summer as we move into the new week. major change in weather pattern. much of the summer has been wet because of low pressure close by, as we have now, bringing the rain. that's because the jet stream has been to the south of the uk. hop the other side of the atlantic, run things on a bit, we have much more amplification
8:57 pm 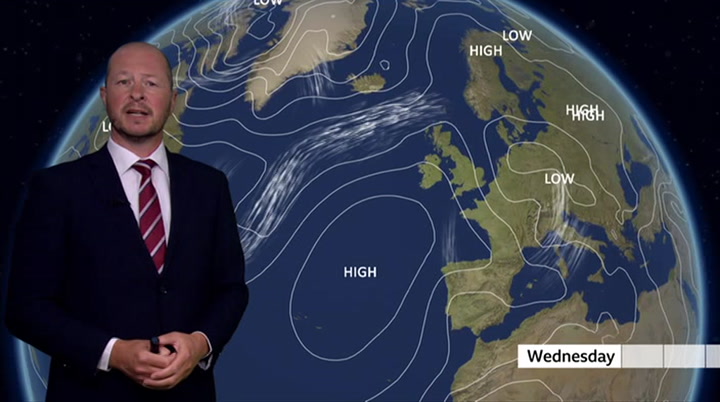 of the jet, meaning we'll find a strengthening jet running to the north of of the uk, allowing high pressure too slowly but surely build up from the southwest and settle things down. things are not settled at the moment, though. we have rain developing and pushing its way eastwards across england and wales, northwards too, so turning wetter here, some heavy bursts of rain. does turn drier across scotland with the thundry downpours moving away, and largely dry overnight in northern ireland. a touch cooler here, warm with the cloud and rain in england and wales. still some heavy bursts of rain in the morning. the rain moving slowly northwards, it may ease for a while with sunshine coming out in places, triggering the thundery downpours. scotland, but also in particular towards the southeast of england and east anglia, the threat of some localised flooding by the end of the day. not as wet for northern ireland, wales and perhaps the south west, and should be a bit warmer than it was today. low pressure with us for the start of the week, hence that flooding rain in places. the low transfers out into continental europe, most of the thundery downpours are away the other side of the channel. but the low is close enough by to
8:58 pm 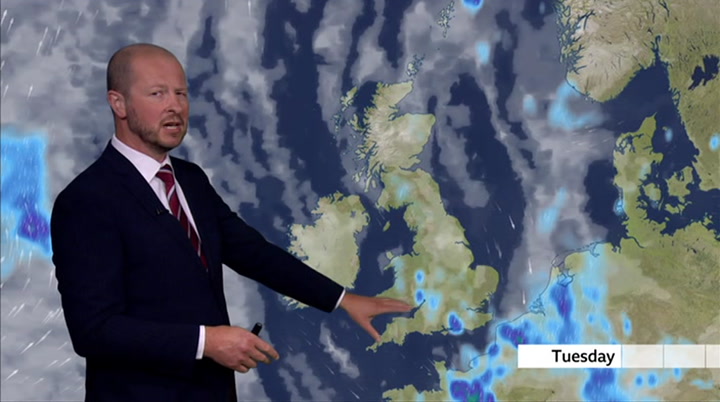 bring the threat of heavy showers towards the south east but generally, we have fewer, lighter showers, turning drier from the west, bit more sunshine coming through, so temperatures a little higher on tuesday. and it continues to dry out during wednesday as that rain pushes away. yes, we'll find a weak weather front arriving in the northwest, bringing more cloud, but otherwise dry and decent spells of sunshine. as a result, those temperatures up to 25 degrees. it won't get hot just yet, we have the high pressure building in towards the uk but this is where the air is coming from, more of a northerly breeze. but certainly an improvement as the week goes on. starting wet withflooding rains in places. from midweek onwards, much drier with sunshine and looks as though summer is coming home at last.
8:59 pm 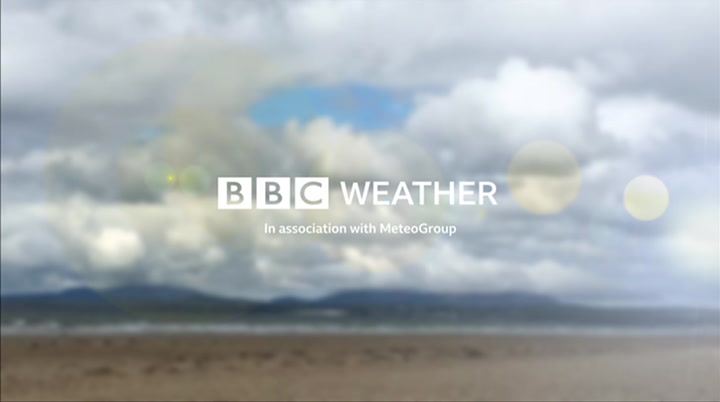 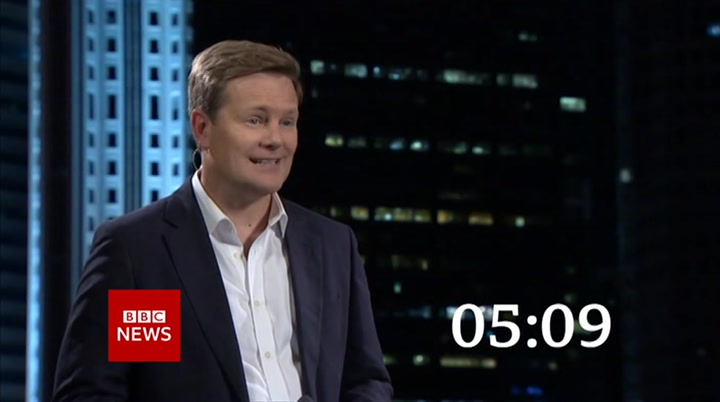 this is bbc news, with the latest headlines for viewers in the uk and around the world. cheering the fans go wild — england score an early goal against italy in the euro 2020 final. this is the moment luke shaw struck. can england hang on to win a first major trophy for 55 years? across england, the millions without tickets are now hoping that tonight, more than ever, it's coming home. in the day's other news: and america's west is scorched by heat as california and nevada brace themselves for even more record—breaking temperatures. lift—off for branson — the billionaire virgin galactic
9:01 pm