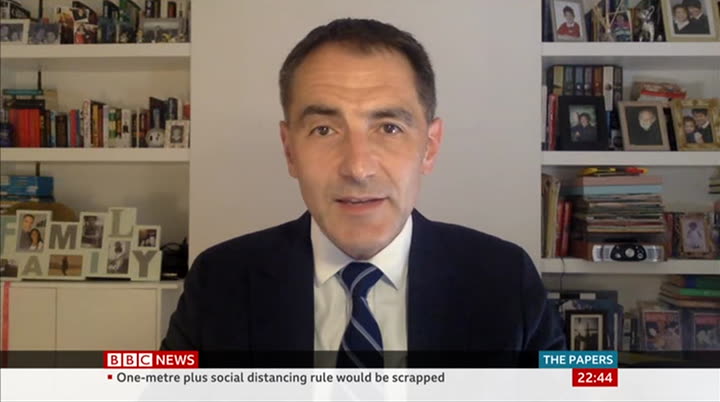 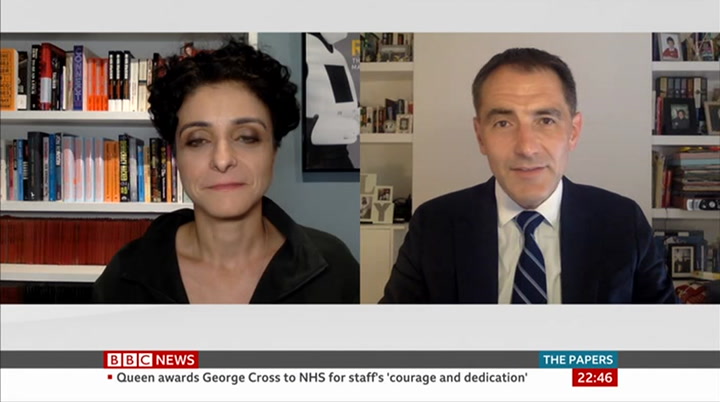 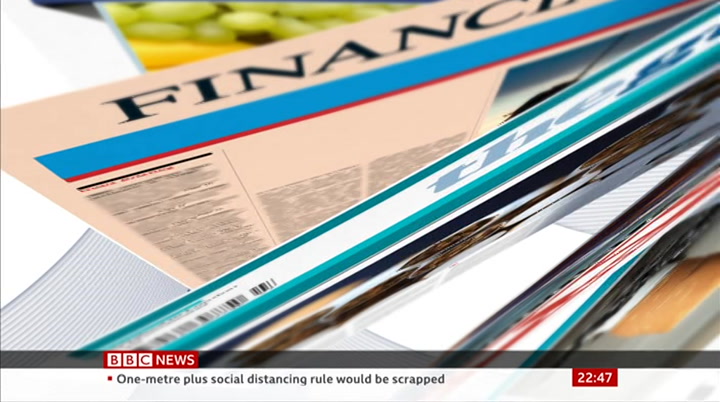 good evening. thanks forjoining us. after winning the hearts of brits across the country, emma raducanu's wimbledon has come to a sad conclusion. the 18—year—old was forced to retire in her last 16 match against ajla tomljanovic after a medical issue in the second set. joe wilson has this. emma raducanu's first lesson in when the second week was how to wait the practice courts in the afternoon, show court finally at 7:52pm and what we saw it looked like another example of remarkable composure. her opponent, top of the screen from australian ajla tomljanovic, is over a decade into her professional career. but look who was embracing the occasion. you could see how closely
10:49 pm 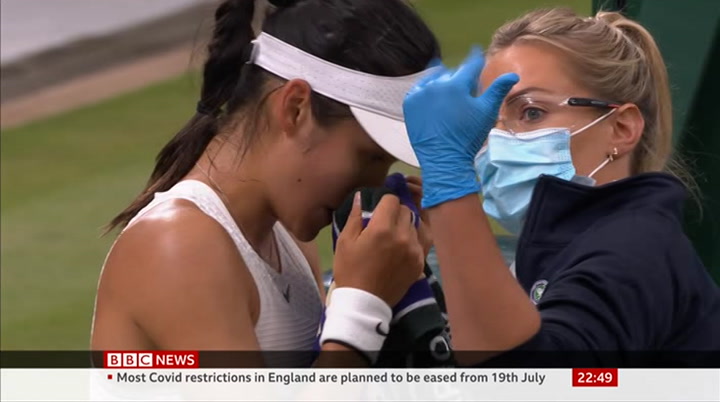 matched the players were every rally feeling tense. imagine being emma's mum. a 50 minute first set was settled like this. 6—4 to tomljanovic put in the second is at the tennis remained intense under the roof, requiring energy, demand concentration, everything. it became clear she was battling more than the score, medical timeout. nice deep breaths. remember, this is an 18—year—old in her first major tournament. for whatever reason it was certainly too much and what can we feel but sympathy? the match was over. ladies and gentlemen, due to medical reasons, miss raducanu is not able to continue the match. emma must be really hurt if she came to the decision to retire, _ to play as a brit at home -
10:50 pm

is unbelievable so i'm really sorry for her because i wish- we could have finished it. but it's a sport, it happens so i wish her all the best. i standing here in the early evening drizzle, it was not the way we wanted to finish but we must remember and hope that for all emma raducanu has achieved at these championships, for her this is just the start. joel wilson, bbc news, wimbledon. triple grand slam winner angelique kerber progressed to the quarterfinals by beating american teenager coco gauff. the 2018 champion overcame the talented 17—year—old 6—4, 6—4. while tunisian ons jabeur became the first arab woman to reach the last eight, coming from a set down to beat iga swiatek. in the men's draw, roger federer is through to the quarterfinals, with a straight sets victory over lorenzo sonego, while novak djokovic�*s bid for a record—equalling 20th men's grand slam title continues.
10:51 pm

the world number one enjoyed a relatively routine straight sets win against chile's cristian garin. it puts him through to the 50th grand slam quarterfinal of his career. it took a lot out of me, but at the same time, it gave me wings. it gave me the confidence booster that i needed for wimbledon, and energy levels are really good. i'm pleased, this is the quickest surfacing sport coming off from clay. it takes a little bit of time to adapt to an aggressor game and make sure you are at your best —— address your game. the further the tournament goes, i feel like i'm more comfortable playing on grass. capacity crowds could be set to return to sporting events in england from july 19th without the legal requirement of vaccine passports. the move will be voted upon next monday and means there could be full stadiums for the start of the premier league
10:52 pm 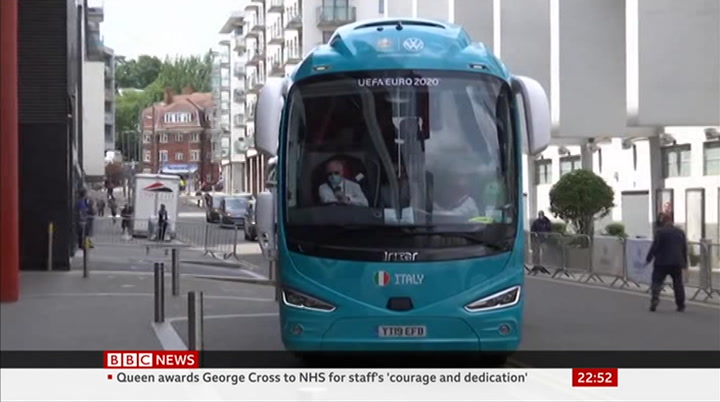 moment, — we're all in this together. at the moment, everything is good. in less than 2a hours' time, it's the first semifinal at wembley between italy and spain. both teams arrived in london today, italy returning to wembley after beating austria in the last 16 stage before knocking belgium out in the quarterfinals. spain are here after a penalty shoot—out win over switzerland in the quarters. news from the british and irish lions�* tour of south africa, and england flanker tom curry will make his first appearance for the side, against the sharks injohannesburg on wednesday. wales lock adam beard and back row josh navidi will also make their debuts after being called up as replacements, and ireland's iain henderson will captain the side. the lions comfortably won their first match in south africa, thumping the sigma lions 56—14 on saturday. now, to the latest milestone forjames anderson — he's taken his ioooth first—class wicket. it came during a superb spell of bowling for lancashire against kent in the county championship.
10:54 pm 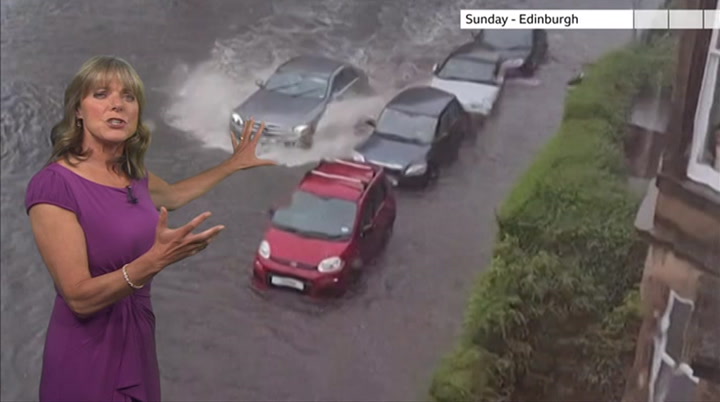 anderson claimed his best figures at old trafford — 7—19 — as kent were bowled out for 7h. and that's all the sport for now. from me and the rest of the team, bye—bye. hello there, summer 2021 so far appears to have been feast or famine, whether it's sunshine or rain. when we have the rain, we really have had the rain. this was sunday in edinburgh. you can see almost two inches of rain fell in 2a hours. and that brought some disruption. we're still under an influence of low pressure. still producing some rain, but it does look as though things will quiet down a little later this week. for tuesday, we see wet weather moving into southeast scotland through the day, blustery as well. strong winds, gale force gusts along the kent
10:55 pm 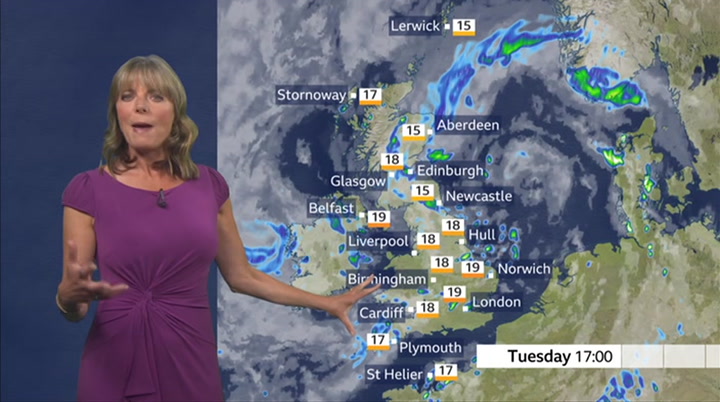 coast, that will rattle through some showers at quite a pace. but it means and temperatures will feel a little bit disappointing, 18 or 19 degrees at best. as we move into wednesday, that low pressure moves off into the north sea, and the shower will gradually start to fade away. wednesday will be a quieter morning, and we're still likely to see a few showers around, few and far between, but it means would lighter winds, far between, but it means would lighterwinds, if far between, but it means would lighter winds, if you get a shower, some could be slow—moving. dodge the showers and get some sunshine, it will be a degree or so warmer. the highs of 21 degrees, 70 fahrenheit. thursday, a ridge of high pressure builds which will quiet down the story for a couple of days, meaning a good deal of dry weather in the forecast. favourite spots perhaps on thursday into the northeast of scotland. there will be some lengthy spells of sunshine coming through, and those temperatures will be a little warmer — 23 degrees and 73
10:56 pm 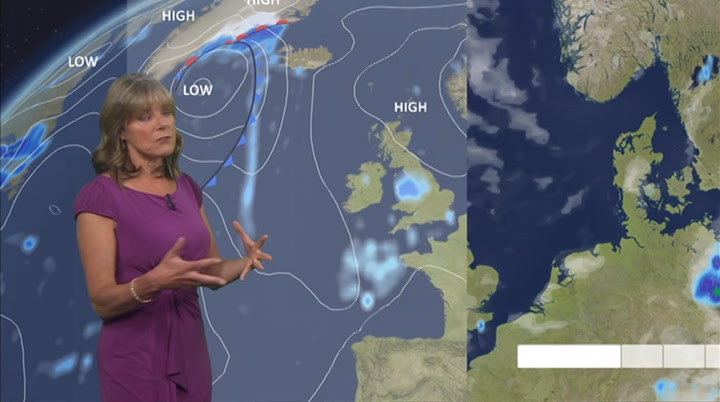 fahrenheit. it's also a repeat performance on friday. we're still under that high pressure, although that weather fronts may spoil things for the start of the weekend. don't worry about that at the moment— let's worry about that at the moment— let�*s take a look at friday. mostly let's take a look at friday. mostly dry, still the risk of isolated showers, but should be few and far between. 23 degrees the high. if you are planning on spending time with friends and family outside at the weekend, you do have to be prepared for the potential return to some sharper, possible boundary downpours. the position of the showers certainly subject to change this par out, but on saturday across england and wales, we could see some sharp showers. scotland and northern ireland may stay dry. what on earth is happening? thejet stream has been pretty powerful, and it's the jet stream that drives in areas of
10:57 pm 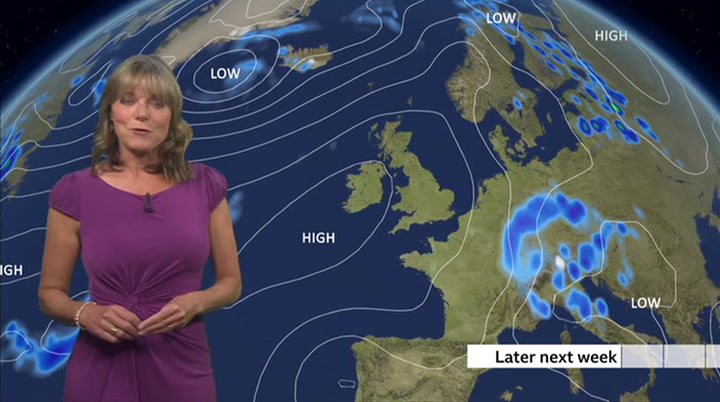 low pressure. cooler side, that drives in those systems, and the disappointing feel to the story. as we move into next week, there are indications that the jet stream is going to weaken offjust a touch. it's also going to move to the north of the uk, so once we're on the south side of the jet, that potentially allows an area of high pressure to build in from the south. that means there is the potential for seeing some sunshine, but also some warmth returning. because he temperatures into the mid—20s. a lot of water to go under the bridge before then, but keep watching the for forecast for further details.
10:58 pm 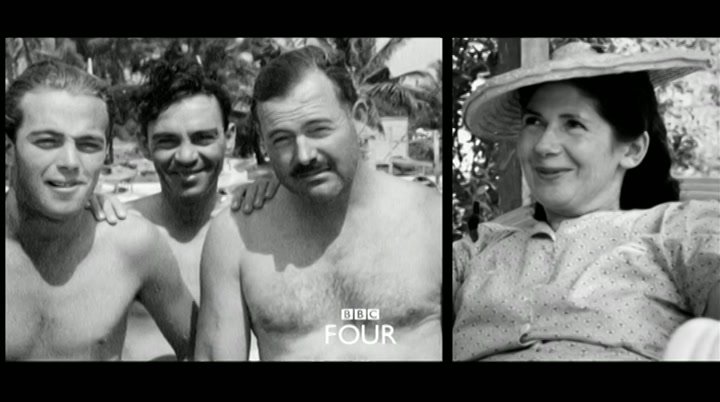 this is bbc news with the latest headlines for viewers in the uk and around the world. in england, where coronavirus cases are rising rapidly, the prime minister confirms plans to scrap most remaining restrictions in two weeks. there is only one reason why we can contemplate going had to step four in the circumstances where we would normally be locking down further, and that is because of the continuing effectiveness of the vaccine roll—out. the us is heading for the exit in afghanistan. but the violence is rising as the taliban have afghan troops on the run. more abductions in nigeria, gunmen kidnapping at least140 schoolchildren in the north—west of the country. it was meant to be a pride march in georgia — instead,
11:01 pm