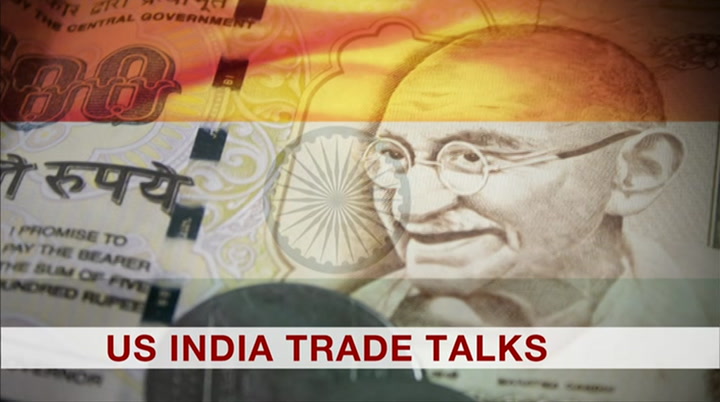 this is the business briefing. i'm david eades. a new departure for thomas cook as the struggling travel giant seeks a rescue from china. plus — america's new trade war target. us officials are in delhi for talks as the relationship worsens between india and its biggest trading partner and on the markets: us stocks rise — the dow and s&p closing at new record highs. asia though in something of a holding pattern ahead of key trade data from china.
5:31 am 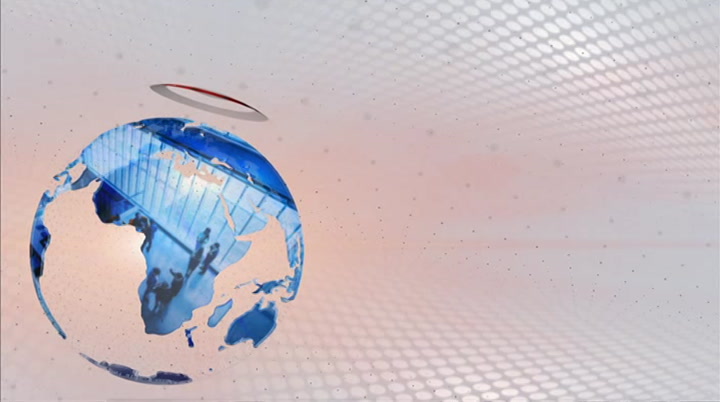 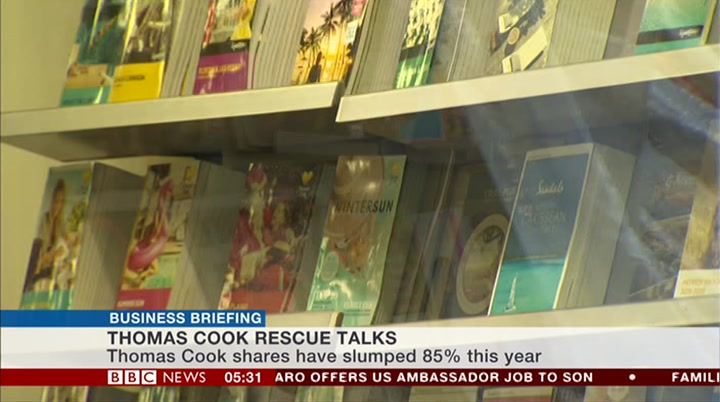 creditors. shares have also slumped, down 85% this year alone. thomas cook said it was convinced that brexit had caused some customers to delay travel plans. now, shanghai —based company is looking to take control of thomas cook's to operating arm, with investment worth $940 million. it already owns 70% of the company. it already has club med and cirque du soleil in its portfolio. because of commission rules, the company would own a minority stake in the airline business. non—eu firms are not allowed to own more than 40% of an airline. it isjust allowed to own more than 40% of an airline. it is just 27 years old, but with the increase in the number of chinese holidaymakers it has expanded rapidly. if this deal goes ahead, even though thomas cook will effectively be broken up, it will safeguard the future of the business, which has looked
5:33 am 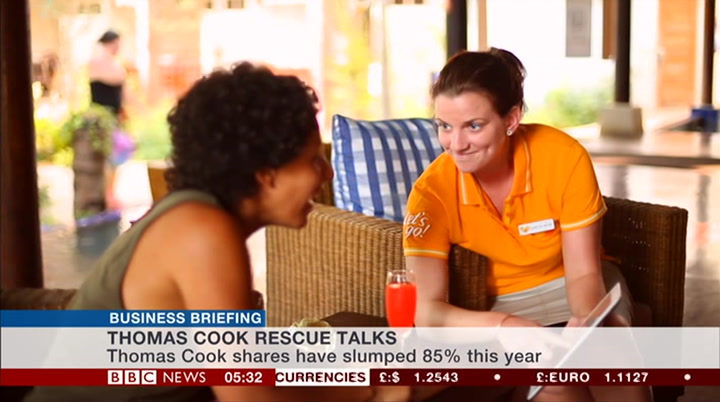 increasingly shaky over recent months, and give some reassurance to the 22,000 staff around the world. so what more do we know about the company planning to rescue thomas cook? let's go to our asia business hub where rico hizon is following the story. this tourism group is a subsidiary group of the fosun international ltd, which is an investment company with headquarters in shanghai. it is listed on the hong kong stock exchange. fosun has spent billions of dollars buying foreign companies in the haircare, sport, tourism industries, including a stake in thomas cook. it also owns the wolverhampton wanderers, it bought
5:34 am 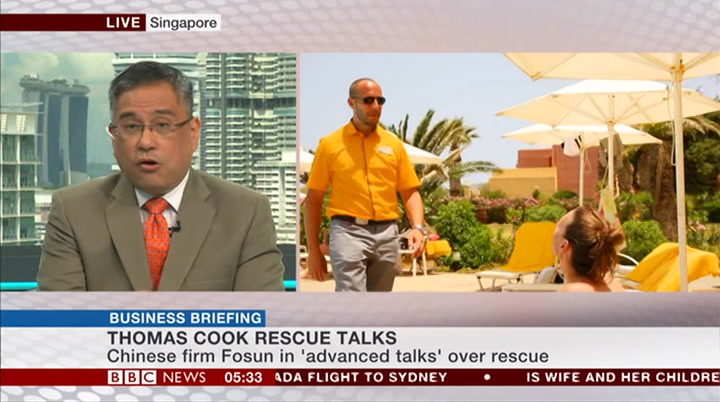 the english football club in 2016 for £45 million. the conglomerate also owns the upscale beach resort, clu b also owns the upscale beach resort, club med, and the entertainment group cirque du soleil of canada. it also owns a greekjeweller. while it has significant exposure in india, this is... they indeed have a large exposure not only in asia but in europe and the us, and we will hopefully know before the weekend if a deal over thomas cook materialises. if they can turn thomas cook around the way they have turned the wolverhampton wanderers around, they will be doing a very good job indeed! let's go to india now, where the commerce minister is holding talks with us officials to try and repair a fast—deteriorating relationship with his country's biggest trading partner. last month the trump administration took away india's preferential trade status. it's intended to benefit developing countries, but president trump says india isn'
5:35 am 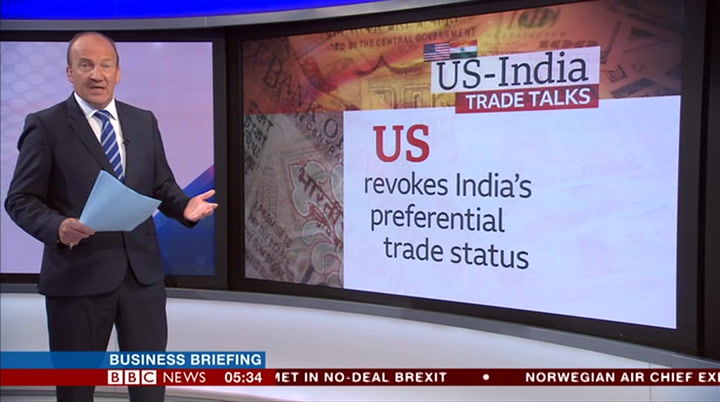 giving enough access to its own markets. that means india loses the right to export goods worth $5.6 billion a year to the us duty free. india retaliated by raising tariffs on 28 american products. a 30% tax was raised to 120% on us walnuts, and 70% on us chickpeas. before the fall—out, business between the two was booming. last year trade between the two countries hit a record $142 billion — up 600% since 2001. india is running a hefty trade surplus, selling more to the us than the other way round. washington points the finger at what it calls nationalist polices of indian prime minister narendra modi, which protect indian firms. this week president trump
5:36 am 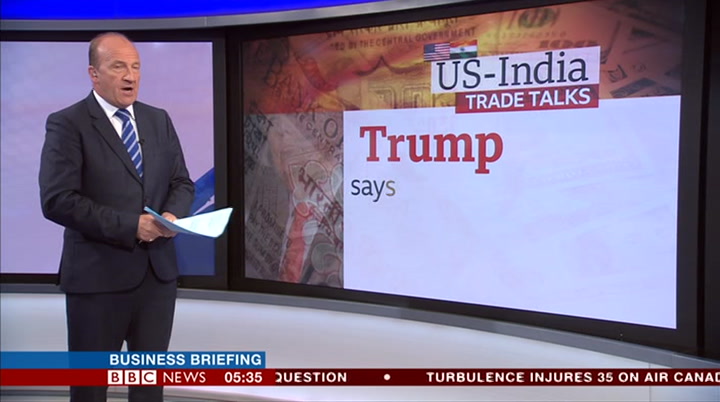 tweeted that india's high tariffs were unacceptable, despite saying he and modi had worked through their differences at the g20 summit last month. let's get more on this story from joe miller in delhi. there is a huge amount at stake here. there is. india is obviously a huge market, any large economy in the world wants to have a good trading relationship with a country of1.3 trading relationship with a country of 1.3 million people, which is growing at roughly 7% a year, the economy, in any case. but the relationship between the us and india has been deteriorating, as you said, over the last few months, and it has been deteriorating over a range of issues, chiefly the trump administration is concerned about the trade deficit it has with india, in other words, it imports more than
5:37 am 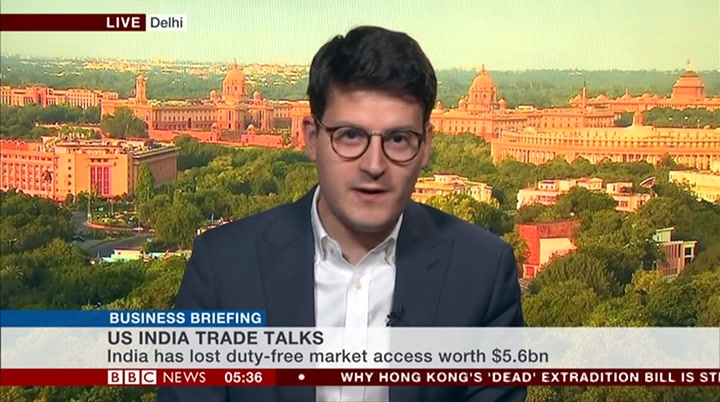 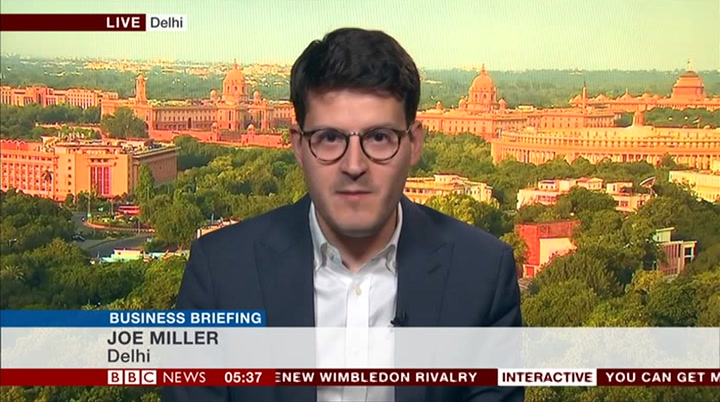 indian officials don't want to signal that they don't care about the us market, of course they do, it isa the us market, of course they do, it is a massive economy, but what they have been doing is subliminally passing on the message from the budget they had last week, and also m essa 9 es budget they had last week, and also messages on the international stage, but very soon the us will need a country like india more than india needs the us, and that it has various advantages, not least the size of its economy, but it is a global player these days and it can set its own rules. it is notjust the white house and donald trump's administration that can come up with protectionist policies, but india has the right to do so as well. it can protect its economy and small businesses. i don't think we will see narendra modi's administration looking to concede too much. let's turn to amazon now — the internet giant has pledged to invest $700 million in training for one in three of its staff across the us. it wants to upskill a hundred thousand staff into roles that
5:39 am 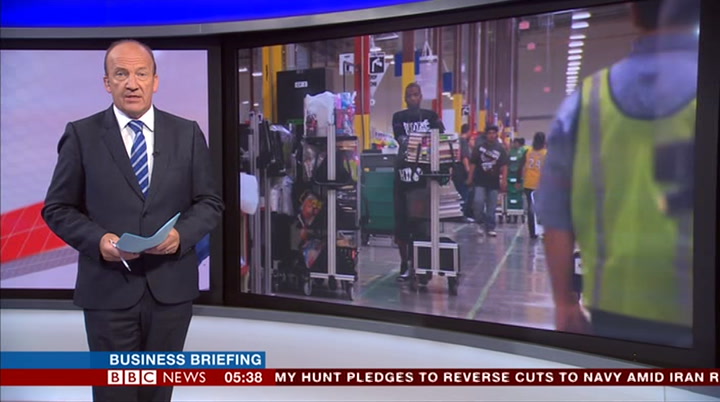 will be in demand in the future, as more manual tasks get replaced by automation. it's partly a response to concerns over working conditions at the firm but mostly about its future business, as samira hussain in new york explains. what they are offering to the employees that want to do this, this is all voluntary and comes at no cost, so if you work, for example, in one of the fulfilment centres and you want to train in it, amazon will facilitate that for you. if you work in part of the corporate amazon, and if you want to retrain as an engineer, amazon will make that happen for you. even more interestingly, if you work in one of the fulfilment centres, so this is one of the basic entry—leveljobs at amazon, and you want to train as a nurse or as an airline mechanic, jobs that do not exist at amazon,
5:40 am 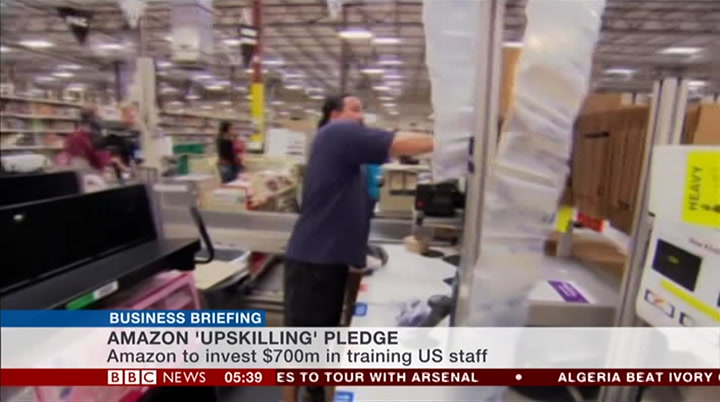 they will pay 95% of the tuition fees and costs associated with getting those certificates or degrees. there is a few reasons for that. firstly, it really highlights their future ambitions, their future goals. we have heard that amazon wa nts to goals. we have heard that amazon wants to get into the plane business. they haven't got there yet but they want to do that. we know that amazon is interested in the pharmaceutical industry. they have already made some business gains in that avenue. so what they are doing is pretty impressive. they are already training a workforce that will be dedicated to amazon. now let's brief you on some other business stories. that's it for the business briefing this hour, but before we go, here are the markets. up next, newsbriefing — we'll take you through ther stories asia a little bit quieter at the moment.
5:41 am 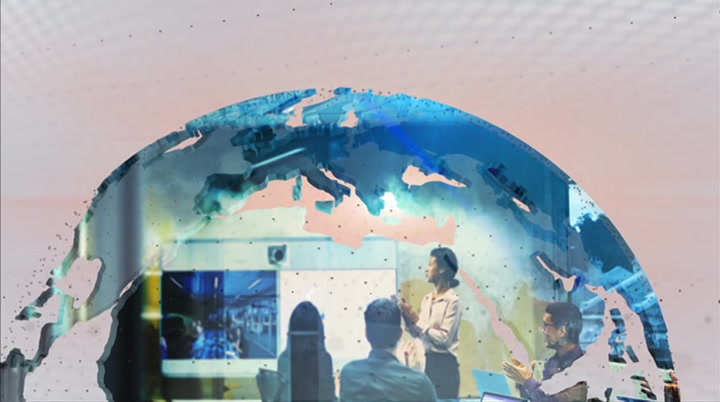 amal clooney has warned that donald trump is creating a global hostility towards journalists which is undermining democracy. the lawyer spoke as a british special envoy on media freedom at a conference in london. our chief international correspondent lyse doucet sat down with her. the leader of the most powerful democracy, when he speaks aboutjournalists, is saying that they are the enemies of the people. president trump. yes, president trump. so i think it's important you had otherforeign ministers from democracies through this conference saying actually we have to be vigilant in guarding press freedom. at the same time i mentioned in my speech that democracies are also creating problems. there are also problems
5:42 am 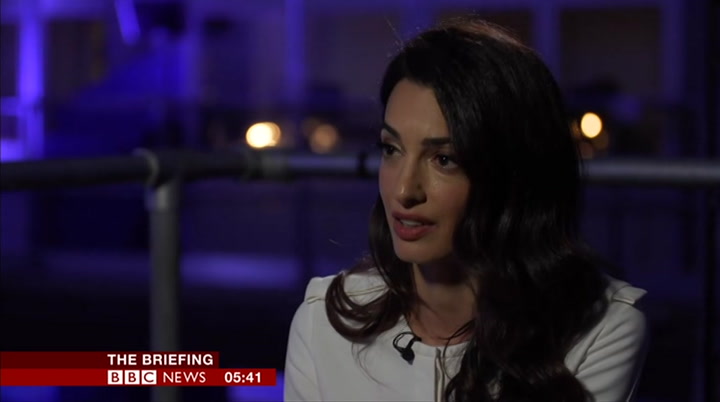 for the media in australia at the moment, i cited a case in northern ireland, i cited thejulian assange case, and others. so none of the states have perfect records. but it is important that the uk and canada are standing up and saying press freedom is important, what can be done to actually improve it and this should be a foreign policy priority and i agree with that. because you yourself mentioned about president trump, senior editors in the united states, including of the new york times, went to see president trump to say you understand that rhetoric is dangerous. did you have any conversations here with ministers to say — have you also spoken to president trump and other leaders to say this has to stop? well, i think this campaign is one of the ways to respond to that so that the voices that we're hearing are not only those of, you know, the leaders of hungary or the philippines or places that are using language that vilifies the media, but that actually through organisations like this there can be a response to that.
5:43 am 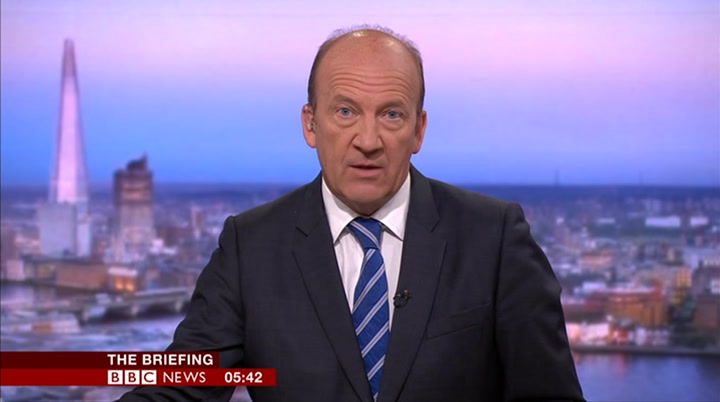 breakfast is coming up at six o'clock with charlie stayt and steph mcgovern, with all the day's news, business and sport. plus, artificial intelligence is being used in police forces across the uk. this is the briefing from bbc news. the latest headlines: president trump abandons his bid to add a question on citizenship to the us census but insists he'll press on with an executive order. new orleans is bracing for tropical storm barry, forecast to hit on friday. residents in some low—lying areas have been asked to evacuate. now it's time to look at the stories that are making the headlines in the media across the world. we begin with the financial times reporting that france and the uk are heading into a showdown
5:44 am 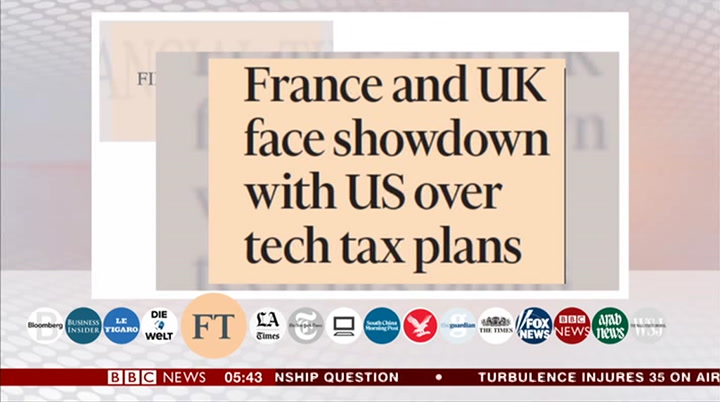 with the us as big tech companies are set to be hit by new taxes. the wall streetjournal covers one of those big companies, amazon, which is spending $700 million retraining 100,000 workers who could lose theirjobs to automation. a story from the bbc news website looks at the latest brexit preparations and the bank of england's announcement that british banks are well—prepared for a no—deal brexit and any trade war fallouts. let's move on to the times now, and all change for prisons in the uk as a range of rewards for well—behaved inmates are announced including cooking their own meals, showering when they like and even having the keys to their own cells. and, finally the independent among many covering this story. england's thrashing of australia which sees them getting into the cricket world cup final
5:45 am 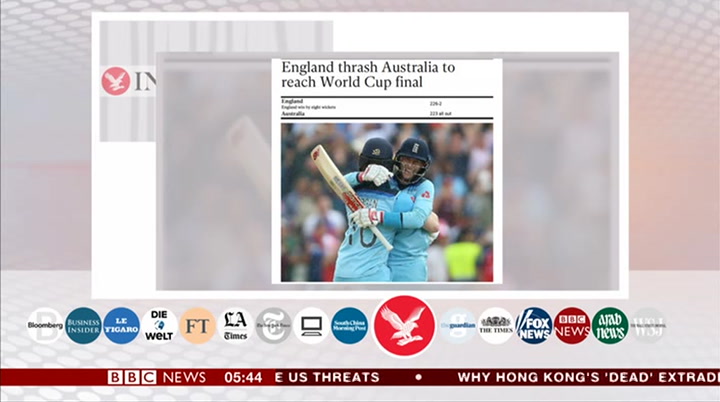 for the first time in 27 years. with me is geraint anderson who is a former city of london stock broker and author of city boy, of which he is also known as a columnist. let's start with the tax you could hold of the huge amounts of money that the likes of facebook and google and amazon and the like are making out of non—american companies. it is all coming together. it has been a long—standing problem for these digital web—based companies and they haven't got much infrastructure in our country. they generally have headquarters in places that are somewhere like dublin with local fresh and tax rates and we don't see much if any of the tax revenues. for cbr earning hundreds of millions so it's a bit of a scandal. the only problem with what is going on here is that it will look like a direct
5:46 am

The latest economic and financial news, market updates and interviews with the key news-makers in the business world.