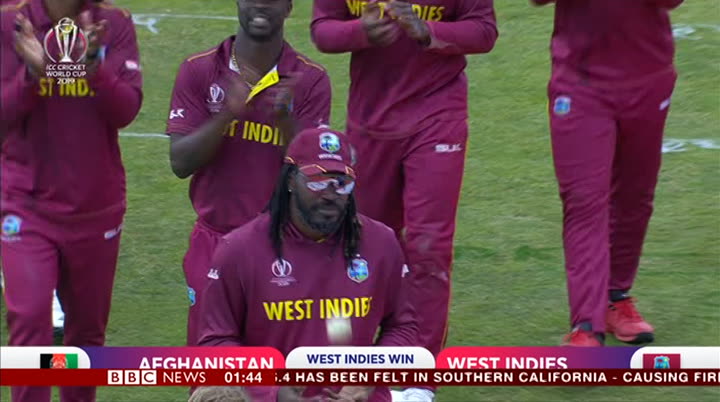 chris gayle's last one day international. and chelsea confirm former player frank lampard will take over at stamford bridge on a three—year contract. hello and welcome to the programme, where we start with tennis, and day four at wimbledon, where the defending women's champion angelique kerber was knocked out, while the grudge match between rafael nadal and nick kyrgios saw the spaniard come out on top. holly hamilton rounds up the day's action at the all—england club. well, it was the class we were all waiting for. nick kyrgios and rafael nadal, it was their seventh meeting. arguing with the umpire, serving underarm and perhaps trying to get underarm and perhaps trying to get under the 18 time grand slam champion's skin. it didn't work, the
1:46 am 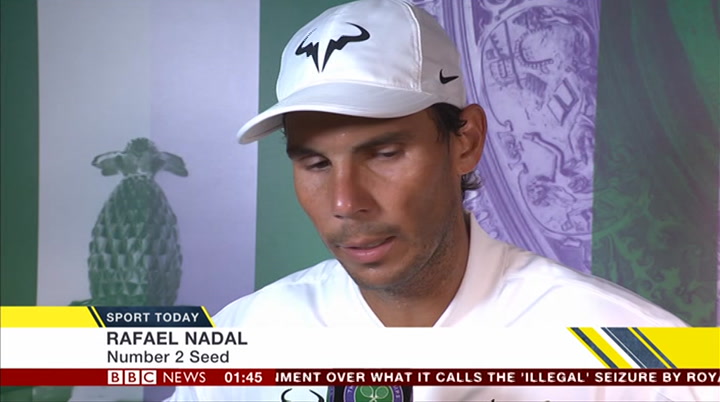 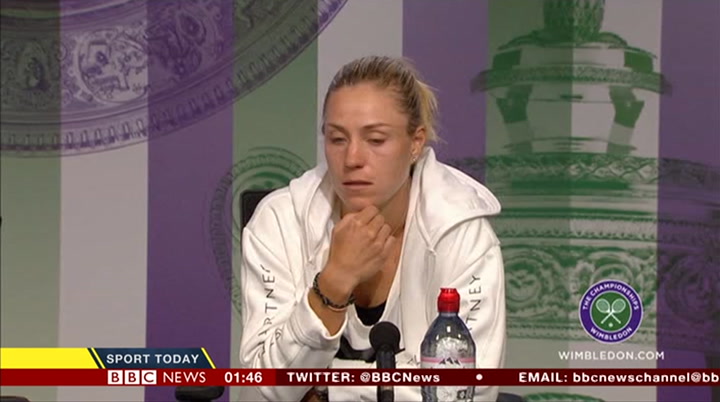 playing here, but sometimes there are days like that and you have to accept it. you have to learn from it and learn to try to forget as soon as possible. still in the running is the world number one ashleigh barty after she beat alison vaughan, the 18—year—old took the first set but when her attorney —— as her opponent turned up the heat. serena williams joined forces with andy murray, will also have no backdrop of its back on court where the spotlight will be on 15—year—old cocoa golf, but how will she fare on centre court —— cori gauff, novak djokovic. on to cricket and west indies have ended their world cup campaign with a win. in a meeting of the bottom two
1:48 am 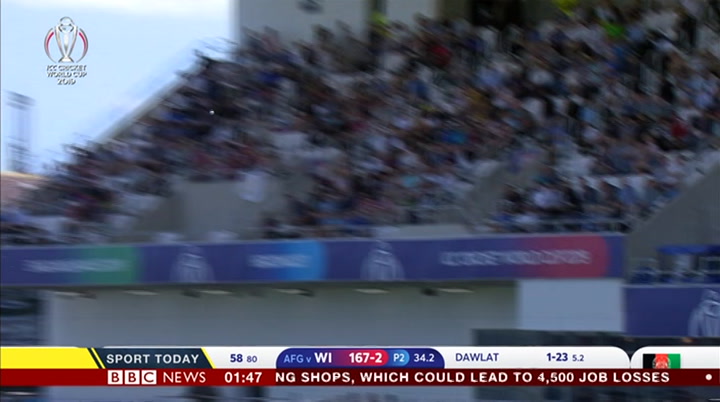 sides in the tournament, they beat afghanistan by 23 runs in their dead rubber in leeds. west indies batted first after winning the toss — and shai hope was their top scorer with 77 as they made 311 for six from their 50 overs. evin lewis and this man nicholas pooran both weighed in with 58 runs each. pooran following up a century in the last game against sri lanka with a half—century in this one. in reply, afghanistan were bowled out for 288, losing their last wicket off the last ball of their innings, to a stunning catch from fabian allen. west indies won by 23 runs to claim only their second win of the tournament but that's nine defeats out of nine for afghanistan. we are disappointed for the performance of the team. if you look for each and every game for my game, we did a lot of mistakes, it doesn't look like the afghanistan team, not
1:49 am 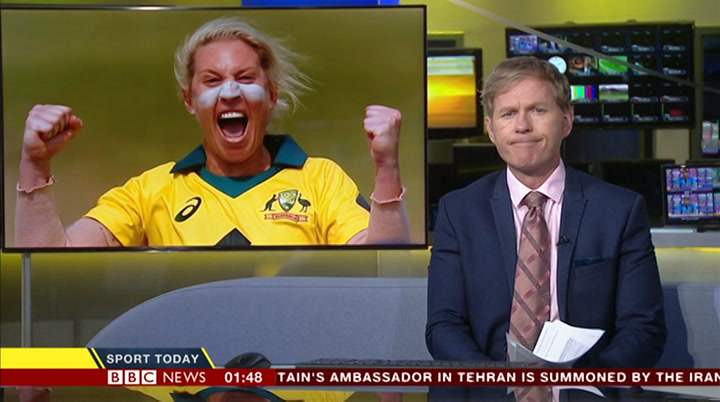 like the last 2—3 years. now to the women's ashes where delissa kimmince picked up five wickets in a player of the match performance for australia as they beat england by four wickets in the second one day international in leicester. it means they take a four points to nil lead in the multi—format series and the bbc‘s henry moeran was watching. in glenn close again, but australia getting over the line again in another low scoring thriller here at leicester. england batted a lot better than they did in the first match, i hundred and 1a set them on their way, but at an hundred and 83 45 they collapsed to australia —— 183-5, 45 they collapsed to australia —— 183—5, four points to nil up in the multiformat series, they now need just another four points to make sure they retain the ashes. england goes into their next oda in canterbury on saturday knowing a win is oh so important. —— odi.
1:50 am 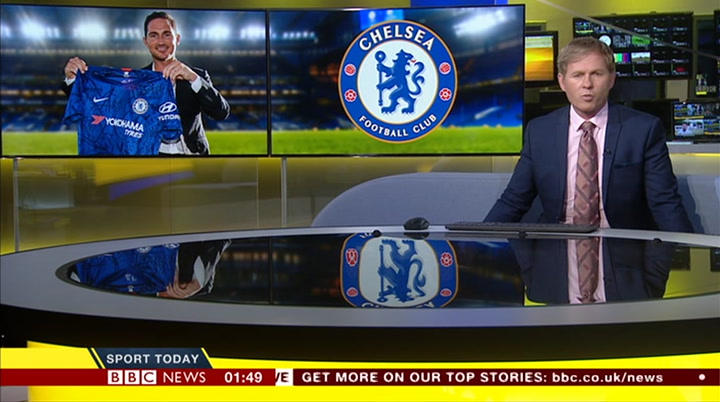 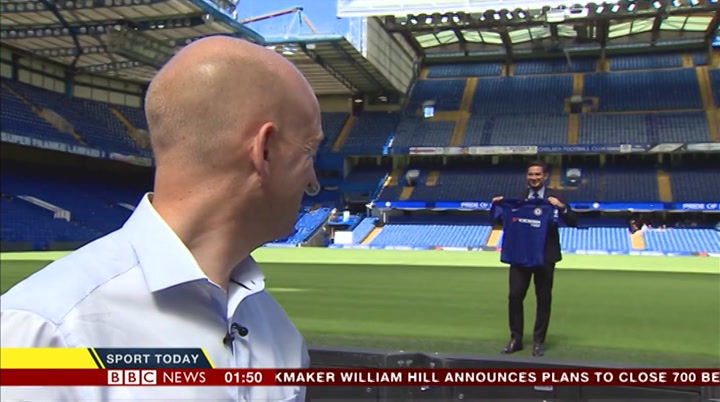 lampard is can ask me again. why the caution? lampa rd is still can ask me again. why the caution? lampard is still a managerial beginner, just a single season at derby county. for all his success as a player, this is some challenge for frank lampard, as leslie is chelsea are currently serving a transfer ban which means the new manager can't buy any new players. for all that, though, the fans are right behind him. it's going to bring motivation and that extra desire because he's such a legend. he has such a status in the club. he doesn't have the coaching experience but i think his playing experience will lend itself very nicely. i hope it works, i really do, i wish him well. would you say this is the biggest challenge for you? yes. my playing career is done, great memories and challenges along the way, i always love the challenge. he's been through ten managers in 5015 years, most recently maurizio sarri, the unproven lampard is a gamble, but
1:52 am 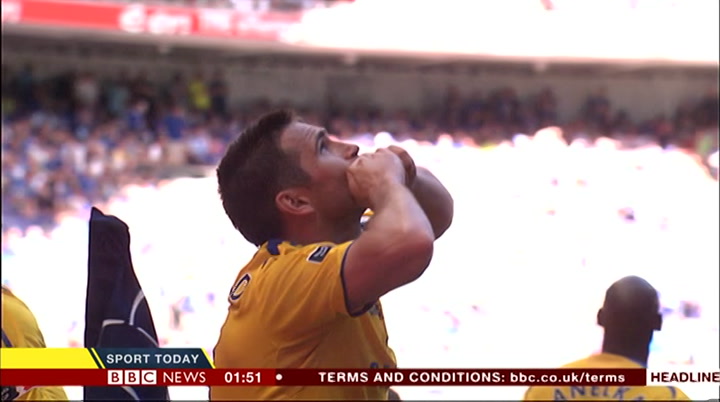 it's opening his past boys here can lead to future ones. staying in england, the premier league champions manchester city introduced their new record signing rodri on thursday. city have paid $79 million for the 23—year—old spanish midfielder, and that tops the $75.5 million they paid leicester for riyad mahrez last year. rodri joins from atletico madrid, for whom he scored three goals in 3a league games last season and he's looking forward to playing for pep guardiola. i'm not coming here because his banners, i think his the greatest coach of the world. lots of things to do and to grow, to learn, and i think with this coach, with them, i'm going to steer my growth here. so i'm really happy.
1:53 am 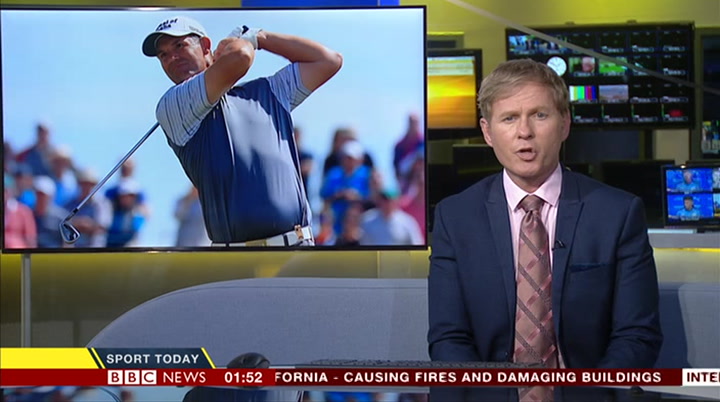 now to golf on the european tour where home favourite padraig harrington is the one shot leader heading into friday's second round of the irish open. the scenic course in lahinch, county clare on the west coast of ireland can be tricky but shane lowry who won this event as an amateur in 2009 wasn't finding it too difficult as he got a bit of luck along the way to finishing on a—under. while harrington, a three—time major winner, last won this title 12 years ago but his first round included some delightful shots such as this birdie putt from well off the green on the par three eighth. and they are enjoying it. with the tour de france getting under way on saturday all 22 teams were presented to fans in brussels on thursday. the race gets under way in the belgian capital to commemorate the 50th anniversary of the first of eddy merckx's five wins in the race. the reigning champion geraint thomas will be defending the title he won
1:54 am 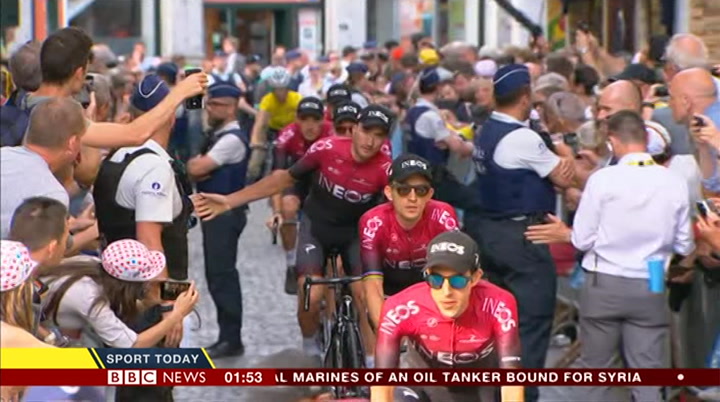 last year — but his team, team ineos, will be without the four—time champion chris foome while he recovers from injury. obviously is the biggest point for the whole team, luckily he is ok, i saw him the other weekend his already thinking about rehab and all of that sort of stuff. we have a strong team and, yeah, we're looking forward to this race. just trying to make the most of it, enjoy it, and, yeah, we've got a great team. we'll have a good time. you can get all the latest sports news at our website, that's bbc.com/sport. you can get many things on the bbc sport website, as a matter of fact. if you like, you can download the bbc sport app, it's absolutely free and worth it. but from me — tulsen tollett — and the rest of the sport today
1:55 am 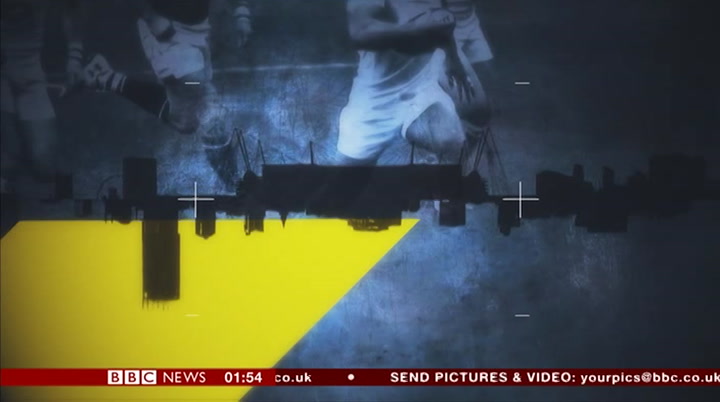 team, goodbye. hello there. if you were looking for the warmest, sunniest weather on thursday, you had to turn your eyes southwards. the further south you went, the bluer the skies remained. a bit of wispy, high cloud overhead in london, but temperatures in the london area got very close to 27 degrees. compare and contrast that with the scene for this weather watcher in ullapool, in north—west scotland. grey, murky, damp, temperatures at 13 degrees. and similar rules apply through the day ahead. the best of the sunshine to be found across central and southern parts of the uk. further north, more cloud, some patchy rain, some mist and murk, especially for hills and coasts in the west. and then some heavy rain returning to northern and western scotland later in the day, where it will also be quite breezy. so let's take a closer look. lots of sunshine for the channel islands, southern england, wales, the midlands, east anglia, temperatures 23 in plymouth, 2a degrees for cardiff, 27 once again across the london area. but some extra cloud will push
1:56 am 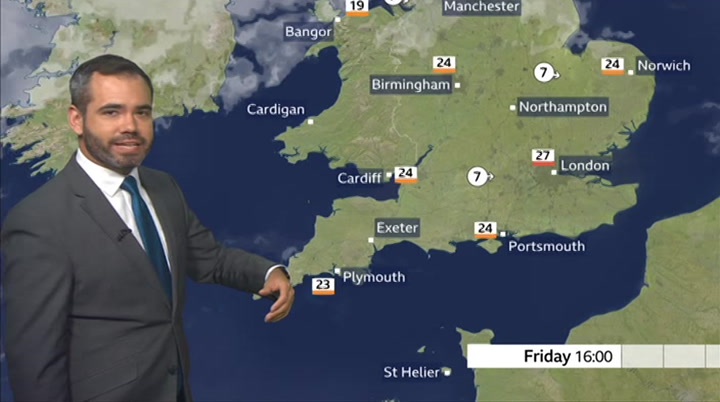 in across north wales in north—west england, north—east england, to the east of the pennines should hold onto at least a little bit of brightness through the day. northern ireland turning pretty grey, rain pepping up again across western scotland through the afternoon. but, with some shelter for the mountains in eastern scotland, aberdeen down to edinburgh, we should hold onto a little bit of brightness and temperatures around 18 degrees. now that cloud and rain which has been plaguing northern areas will start to move its way southwards during friday night. behind it, the skies will start to clear across scotland and ahead of that band of cloud and patchy rain we'll keep some clear skies in the south as well. temperatures as we start saturday between 10—15 degrees. that band of cloud and patchy rain will start off the weekend across northern england and northern ireland, associated with this, a cold front. you can tell it's a cold front by the blue triangles here. and behind that cold front, well, the air turns cooler and fresher.
1:57 am 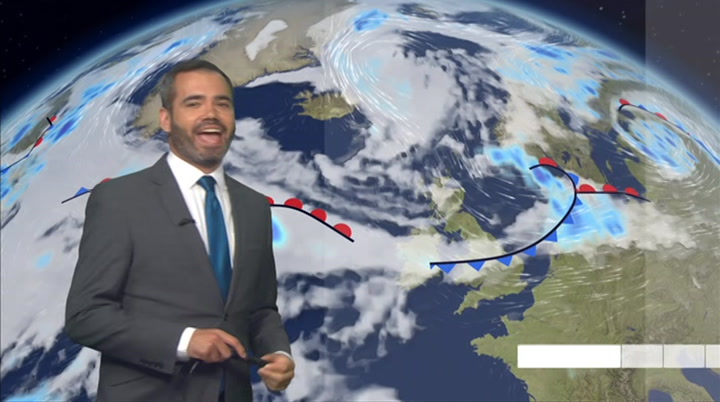 but the front is likely to drag its heels, though, there will be a zone of cloudy here and potentially damp weather. i'm not expecting huge amounts of rain, that will sink across parts of east anglia, the midlands, wales. to the south—east coast of england, we are likely to hold onto some sunshine and warm all day long. temperatures could get to around 2a degrees. but to the north of the band of cloud and patchy rain, it will be cold and fresher although, it will be largely dry with some sunny spells. and all of us get into that fresher regime on sunday. the front will have cleared away by this stage, there will be some fairly large areas of cloud floating around, some spells of sunshine, just a small chance of one or two showers. and those temperatures ranging from 13 degrees in aberdeen to a high of 22 in cardiff.
1:58 am 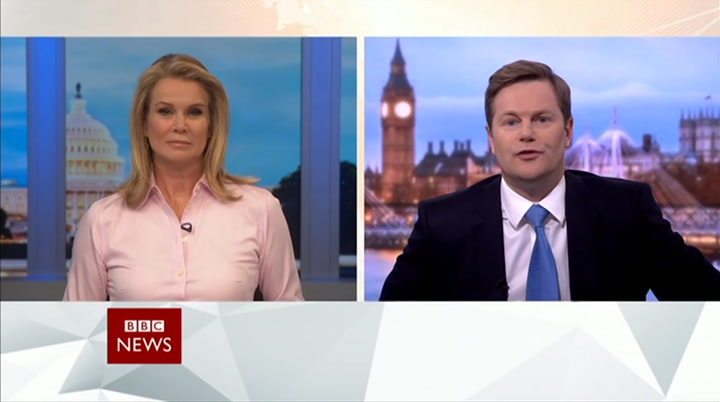 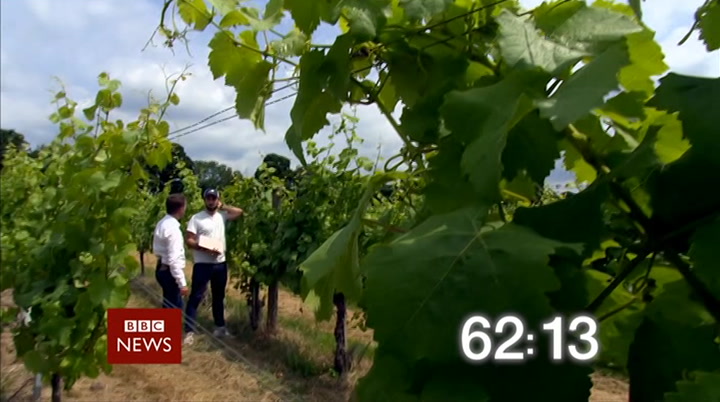 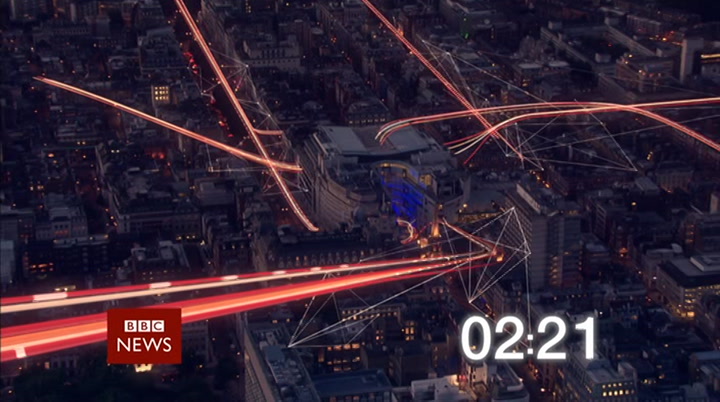 welcome to bbc news, i'm mike embley. our top stories: a special bbc investigation reveals muslim children in china, some as young as two, are being systematically separated from theirfamilies. we uncover evidence of boarding schools surrounded by barbed wire, housing children from the minority uighur community. families of victims of the boeing plane crash in ethiopia speak exclusively to the bbc about their search for justice. his opponents say he has politicised independence day to boost his re—election campaign.
left
right
Borrow Program
tv

All the latest sports news and results from around the globe.